I’m sposed to be working on my ideas for Emma’s new project (3D design award) for which we have to choose a phrase or quote and represent it on a plaque type thing. We’ve been given a limited space of 10x25cm… but no width so it can have parts coming off it.

I’ve chosen ‘Revenge is sweet’ as my phrase (stupidly?) because I think there is a lot of strong imagery that I can create through plays on words, associations and stories (such as Snow white… you will see what I mean when I upload pics of my ideas later).

Here’s a list of stuff I’ve been thinking… just initial ideas:
– Blood red and Black
– Gothic and dark
– Spikey/ Barbed wire fence (to stop people falling into it – easily happens!)
– Graffiti with lipstick
– Cake (burnt in revenge)
– Posion apple with an arrow through it (Snow whiiiiite)

We can basically use anything (ice, chocolate, glitter and pva to form a solid block of glitter… NOT sellotape though hah – class joke about Kirsty) to make it… so its very creative – which in a way is quite a lot of pressure to come up with something amazingly clever to be different and interest people. I can see this project turning into QUITE a competition…. not that there isn’t enough competition in our class already haha

We was arm wrestling yesterday… I am feeling the pain now 🙁 But can say that I am stronger than half the boys in my class, which is 2 out of 4 haha Good times 🙂 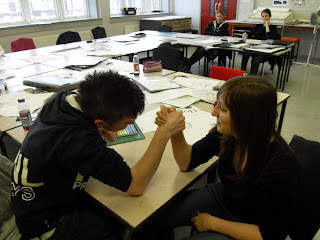 This is me arm wrestling Tom – He lost…. lots of times 🙂
Photo credit to Bobbins… and pose credit to Aurimas… haha nice thinking pose 🙂

I hope everyone’s training themselves up for the Graphics Arm Wrestling Championships on Monday? I think I might have to forefit though… I’ve got table elbow or something? hah

UPDATE 02.03.09 – After last weeks disaster (me and Sophie managed to melt a tub of gel flex in the microwave… HAHA!) we had another go: 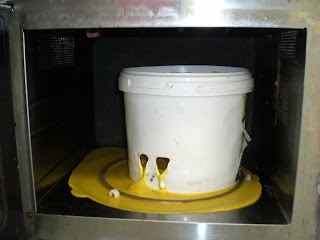 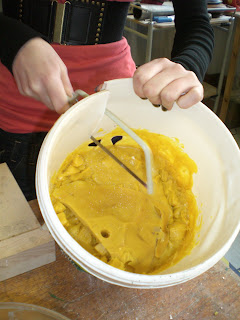 Sophie with her saw to the rescue!! 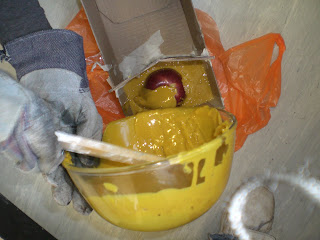 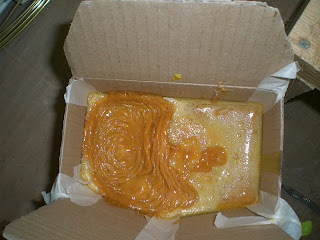 I have a very bad feeling that my apple has decomposed or something…. in the picture above you can see one side is a funny pattern – it was bubbling for AGES :S The gel-flex was so hot that it must have been cooking my apple and the air was escaping?? 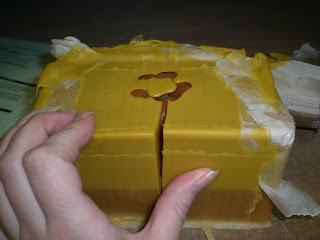 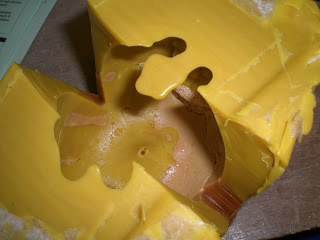 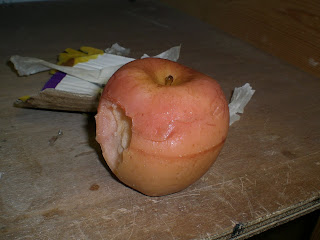 ^ look at the lovely pink cooked apple! It smelt really sweet… I couldn’t decide wether it smelt more like sugar or flowers 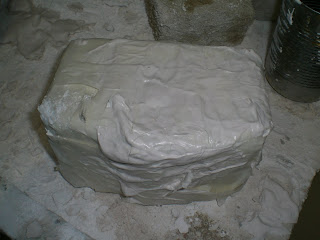 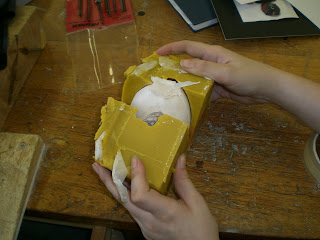 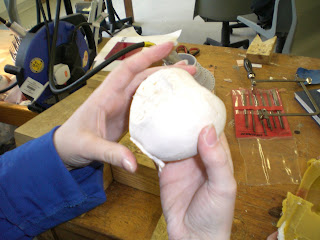 This week I was also thinking about the arrow that is going to go through the apple…. I did a model with a paper straw and cut some hearts out – I’m really going for the heart theme 🙂

I’m thinking the arrow will be made from either thick metal wire or some thinner wire which I can curl into a spiral/spring-like piece…. what do you think? I have already been using wire to re-create barbed wire and have also tried to make my own heart version of barbed wire! 🙂 I think its cute lol

I’m also gonna start to ‘age’ my backboard this weekend – the plan being that I’ve got quite a nice bit of wood (I think its pine?) and I’m gonna completely mess it up by drilling holes in it, making it mucky by…. rubbing dirt into it? hah and also I’m going to hammer some old, rusty, bent nails into it…. but hopefully not so they are dangerous!
Update 15.03.09 – 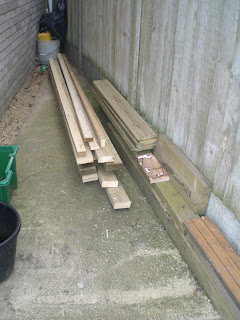 What is so special about this damp and dingy alleyway? – It’s got distinction (hopefully) 🙂

I’ve hammered some nails and screws and bent them into the wood! I’ve also dented it with a hammer, drilled holes and chiselled some edges off! 🙂

ALSO… I’ve put some yoghurt on it and left it outside to grow into moss…. hopefully anyway! 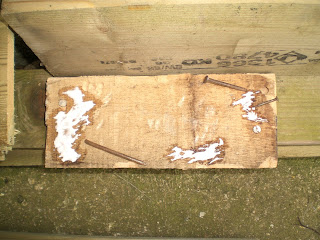 I think I will rub the dirt into it last… cos otherwise it will all dry off? I might throw some teabags at it too? haha

What a colourful week...