I hate the stuff (and Red Bull) but some people depend on it to keep them awake (Mr Ribeiro!)

The ‘Final Major Project’ of my first year (OMG it has gone so fast!) of my BTEC course is to design a Relentless can image. Everyone in my class has been given an art movement of the past to influence our design and I have got: Die Brucke – German Expressionism.

The movement is inspired by primitivism (african art forms) and the artists used Woodcut mostly as the method of printing. They were also said to have invented Linocut printing (which I am having a go with)!

I have been looking at work by Erich Heckel, Ernst Ludwig Kirchner, Fritz Bleyl and Max Pechstein mostly and really, I am most interested by the woodcut work because of the black and white contrasts which make it striking.

Ideas circulating in my mind at the moment include:

As I said, I am having a go with some linocutting (a Die Brucke invention!) to create the main logo because a computer generated typeface just won’t do the job! And also because I do like to add some kind of handmade element to my projects! 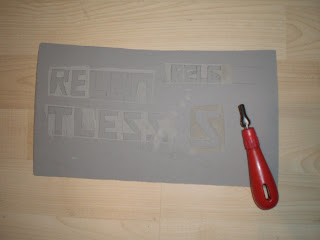 I have a new found respect for linocut artists because I’m finding it quite hard to keep the same amount of pressure on the blade and so my lino has about 20 different levels! Practice makes perfect I guess!

But I probably couldn’t have taken this on at a worse time because I am so behind as it is already… the deadline for this project is 10th June! It would seem I just like to make things hard for myself 🙁 I don’t want to have to rush things but I don’t want to miss the deadline obviously! I blame the Greek! haha

I also have to write an essay on this movement, which I don’t think I’ve ever properly been taught to do(I always seem to get through by waffle?), could be interesting! Hah… at least I know not to copy Wikipedia, unlike some people *cough* Tom *cough* 🙂

As me and Tom say… ‘We always seem to get it done in time, somehow!’ and hopefully it will be the same story as usual. Maybe this time I will have the aid of Relentless… and a peg to get rid of the horrible taste. Or maybe I will just stick with good ol’ coffee!?

I handed everything innnnnnnnnnn! Woop! I managed to finish (not quite on time, 2 hours late but I was staying to help out so Mr. Skinner was kind enough to let me work until then) This is NOT the finished can… this is my first attempt at warping though. I decided this was too white so… … added some black. It looks ok I guess?
Oh, I just had a look close up and this isn’t the final either because I warped the end of the last S so that it was diagonal a bit… if you get what I mean? hah