This weekend the American Apparel Rummage Sale came to London.

28,858 people on Facebook replied as ‘Attending’ the event, myself included… but I’m not going now because it sounds like it got a bit crazy! Read about what happened the first day of the sale here

So I decided I didn’t want to get squashed to death, and was pleased to see that they had added a discount code to the website for 40% off the most requested rummage items – including the item I wanted to buy:

A t-shirt for the Graphic Designer inside everyone… these seem to be pretty popular.
The dilema came when picking which letter to opt for… one that I like the look of? one that has comedy value….. e.g.
Dd, Oo, Uu – get any of those? (If no, then don’t worry because when my internet stops being silly I will show you why they are funny)

or my initials (Nn)? 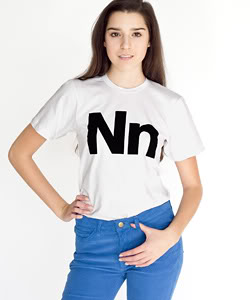 I decided that this is one of those times that having the same letter for both initials was a good thing, so ordered a Nn! I got it in Medium because I hate the T-shirt shape so I thought that I would shape it myself so having plenty of material spare would come in handy!

Come on, who else wants one? I know the 40% code 😉 and I’m willing to share if you admit to being a geek tooooo… 😛