I’ve been a bit quiet this week, sorry! Been quite busy and stressed out, so after the hand in on Friday I basically spent all weekend in bed – a well earned rest! 🙂

I haven’t even posted about this project until it’s over – what is happening to me!? Haha

Lost Formats – Technology which has been replaced, made obsolete, is long gone and forgotten…. for most people. From musical players to communication devices (telephones!?) and my chosen objects – Floppy Disks. Our task was to create a brand identity for an exhibition to be held at Lincoln’s museum/gallery, The Collection; a logo, webpages and graphic panels.

For my FMP at college I chose to create a Design Festival, so I had a bit of experience in this area already – never hurts!

As I said, I chose Floppy Disks as my object – which may seem weird because the other objects were a lot more interesting at first… typewriters, telephones, computers, cameras, stereos, games consoles… and I chose the Floppy Disk. I’m glad I did! I was sat in my room beavering away the other night with a coffee and some Floppy Disk research and can genuinely say I was excited about Floppy Disks! Again… what is happening to me!? Haha But really, I found out some cool facts about Floppy Disks and although I can’t say I’m going to be using one anytime soon… I have a new understanding of the Floppy Disk and a Thank You note for the people who developed USB sticks!

I named my exhibition Capacity. DYK (Did you know) that the capacity of a Floppy Disk is 1.44MB… it would take 694 Floppy Disks to equal a 1GB memory stick! Imagine trying to carry all those around in you pocket…Impossible! (I told you I was getting excited about Floppy Disks! Prepare for more DYK facts Haha) 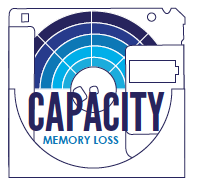 My logo was developed from some experimentation with vector drawings of a Floppy Disk. DYK that the 3.5inch Floppy Disk is actually named correctly. “But it’s not floppy?” Yes, it is! The Floppy Disk is inside the plastic casing. It’s a magnetic disk which has tracks and sectors to store the data on. This is the reason behind the top part of the logo. I mixed drawings of the magnetic disk with the outer casing, added some typography and voila!

Here is my Identity board for the Capacity Exhibition: I tried to use features from my logo in the design to keep it looking like a consistent brand e.g. the separating lines are sections of the floppy disk and the colour swatches are the ‘battery’-like shape on the shutter of the Floppy Disk.

I chose to continue use of the shape & style of the Floppy Disk for my Graphic Panels…. 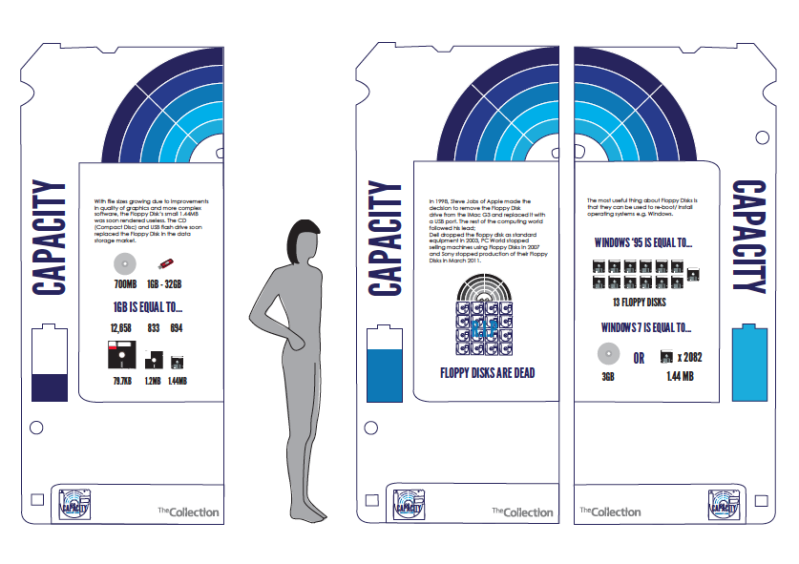 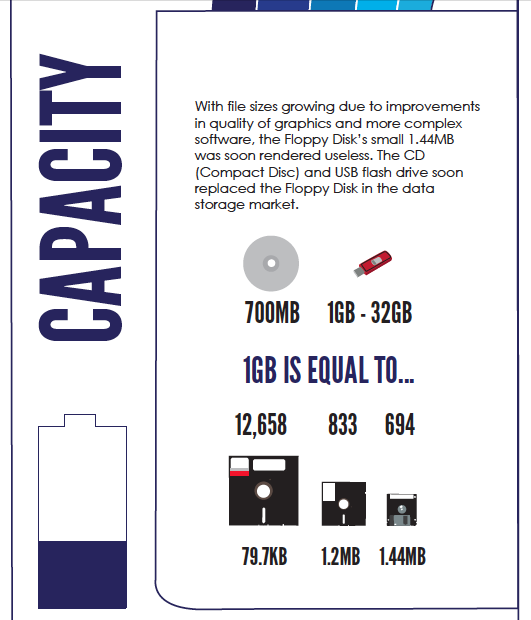 I was quite worried about these panels because I didn’t want to fill them with just information so my solution was vector drawings and ‘fun’ facts. Well ok, so maybe they’re not everyones idea of fun, but most people can relate to them… 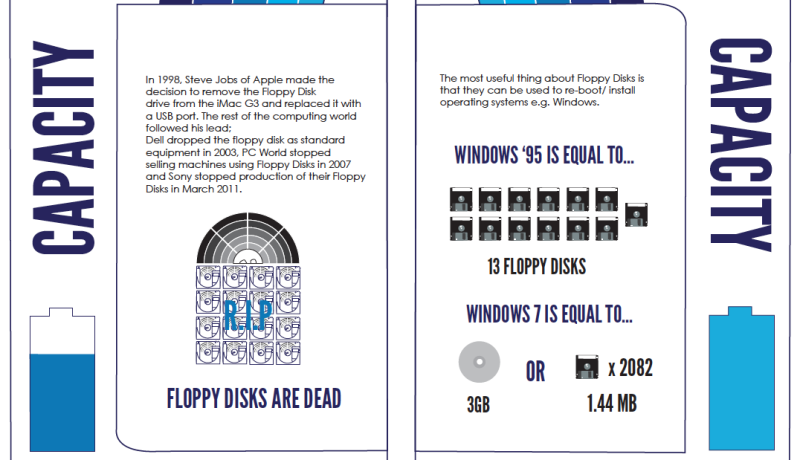 DYK the Floppy Disk was 30 years old when Sony ceased it’s production in Japan this month? No? If only you’d read the homepage of my exhibition… 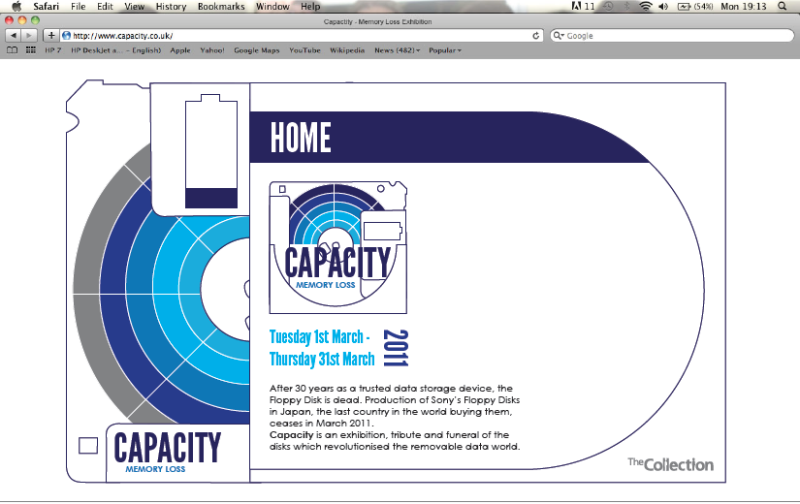 Once again I focused on using the vector drawings of the Floppy Disk from my logo to create the basis of the webpage design. The blue rings(tracks) of the disk would be the navigation bars, which would turn grey and spin round so you knew which page you were currently viewing. 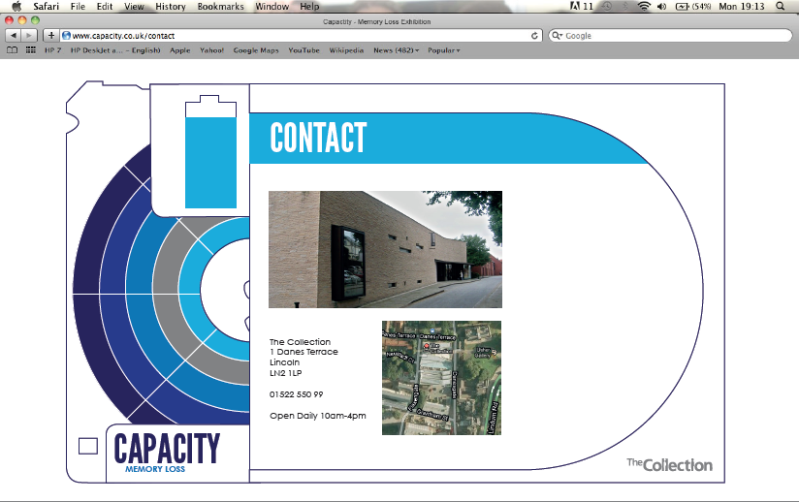 I had my review on Friday at 11.45am and it went really well! I was so nervous but Tim’s comments were so encouraging! I think I impressed him… he described it as a professional, ‘well crafted’ piece of work and said he thought my execution and attention to detail was a 1st!! Eeeek! I know it’s a bit premature to celebrate seeing as we don’t get our marks until Friday, but I think that’s an achievement, right? I was blown away by that comment, but I’m not really expecting to get a 1st… it would be amazing, but I will be happy with a 2:1!

I’ll let you know how I get on… fingers crossed for the best!