Every year a group of students graduate from Lincoln’s BA (Hons) Graphic Design course and show off their work by putting together an end of year exhibition. This is the year of Show Elleven.

I’ve just finished my first year so the whole idea of a final degree show is really scary but exciting at the same time. Yesterday I popped in to look around Show Elleven… 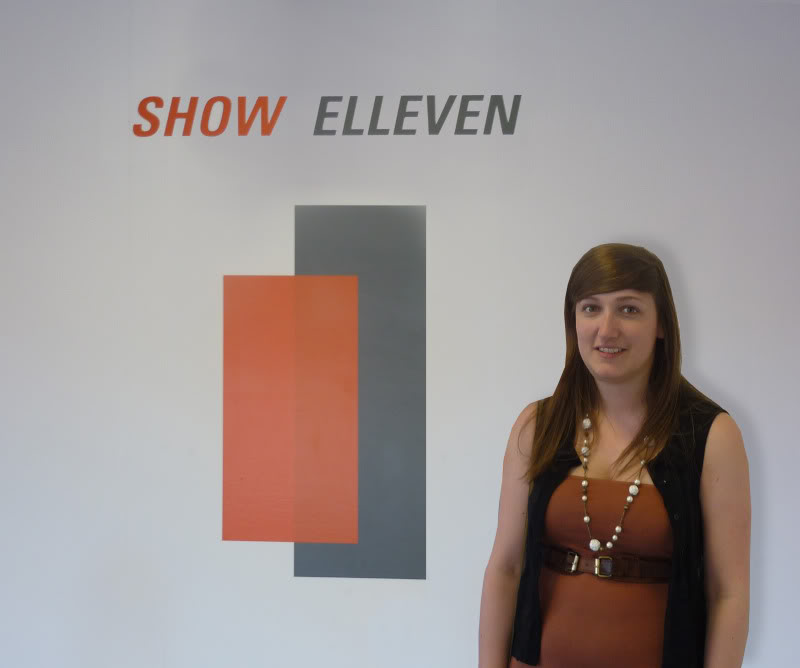 To understand the next bit, you need to watch this first…

It was featured on Creative Review’s website you know!

The ‘theme’ for Show Elleven was based around the idea that ‘There may not be many of us, but we make a lot of noise’ (46 students… compared to the 100 odd that started in my year). They each had designed business cards based around this theme, illustrating a sound e.g. Zap. These ‘noise logos’ were used throughout the show to identify which work belonged to which student. A great idea visually, but if I’m honest I found it a bit too confusing. I couldn’t remember who was which logo and ended up taking a photo of all the business cards so that I could identify the authors of work for this post! (I hope I get them right!) 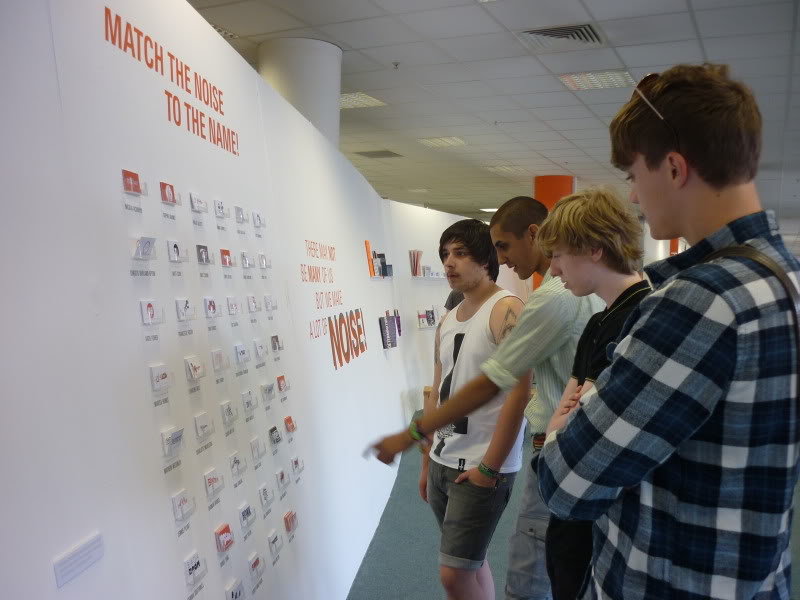 Before I dive into the work, I’d just like to say that I have had to cut down the amount of images I’m using so there was a lot more work I would have liked to of shown but I’ve had to be picky. The standard of work at Show Elleven was very impressive! 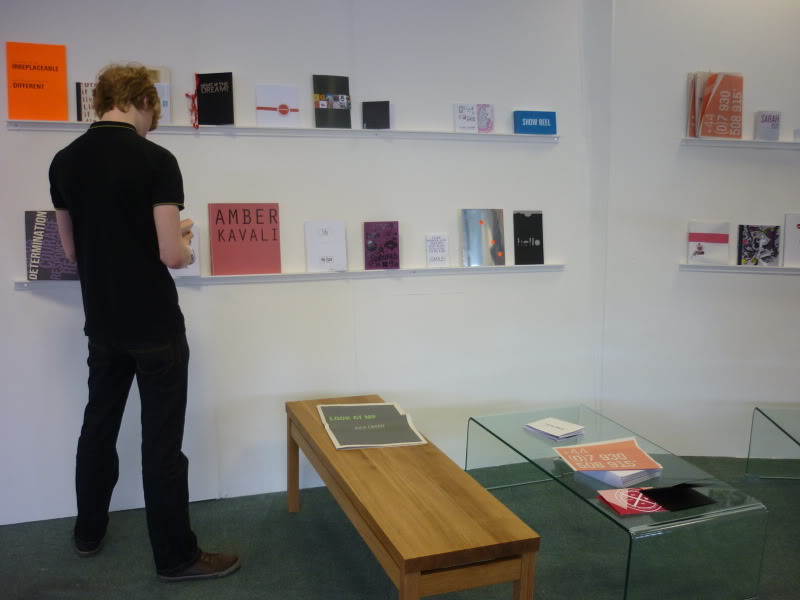 All students produced a personal book/mini portfolio to showcase their work. I thought it was such a great idea to have them displayed like this as it showed the range of approaches and differently styles/personalities. Some of these were produced to such a professional standard, Sunjay was drooling haha 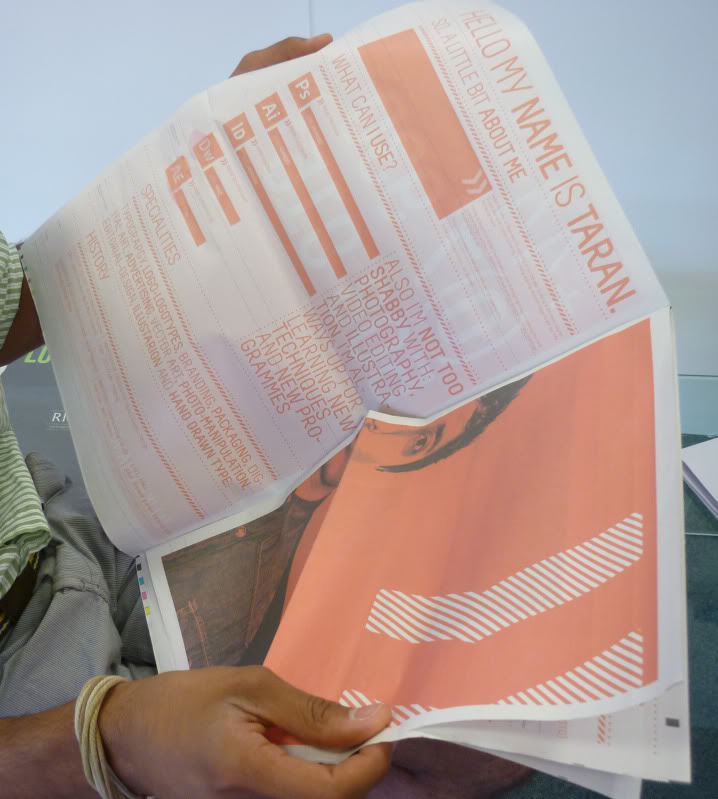 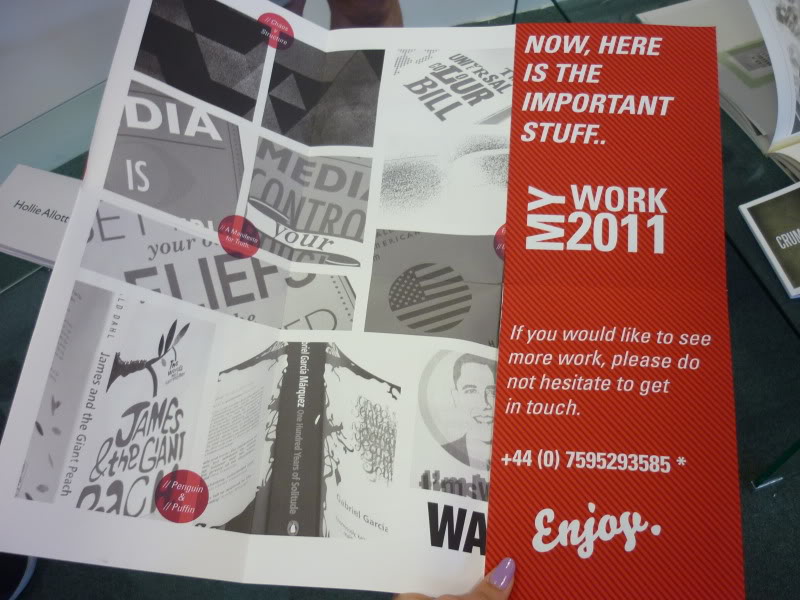 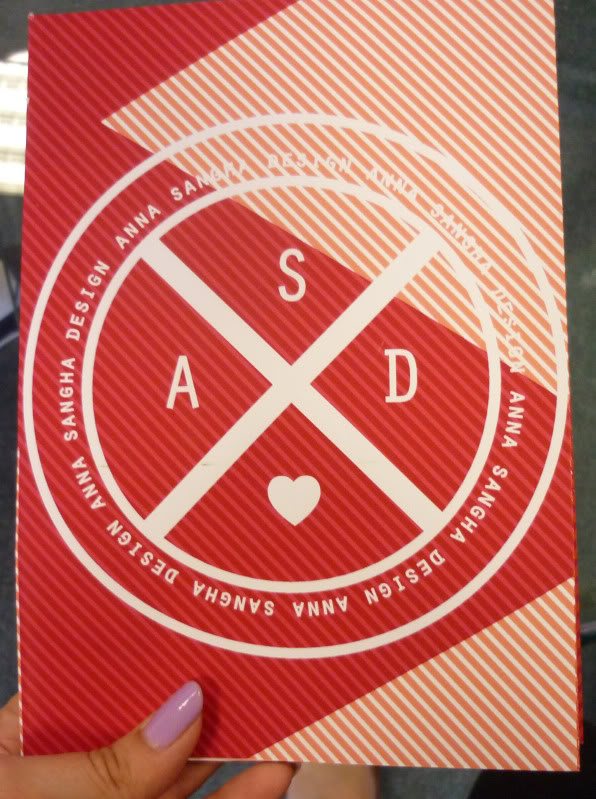 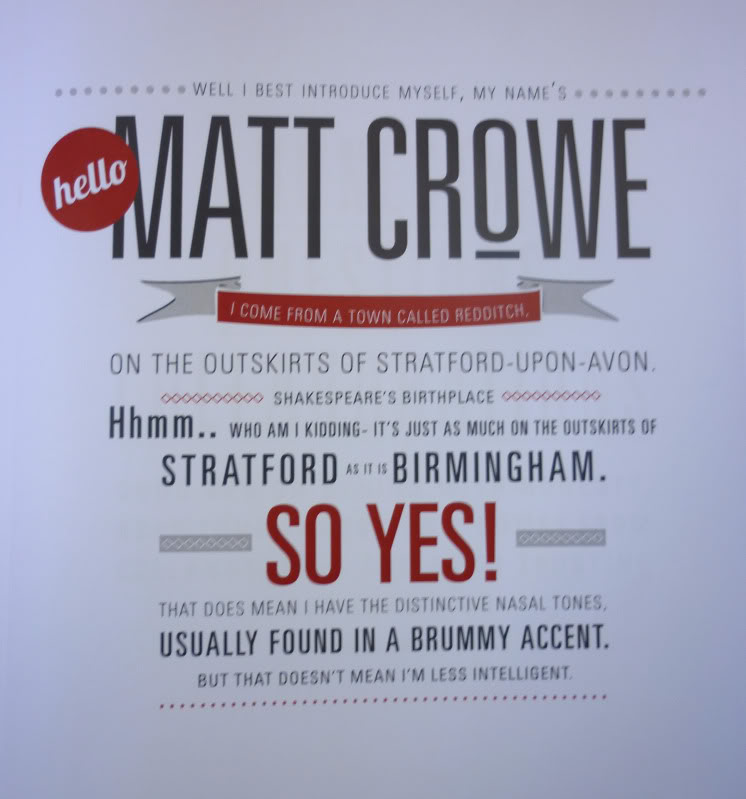 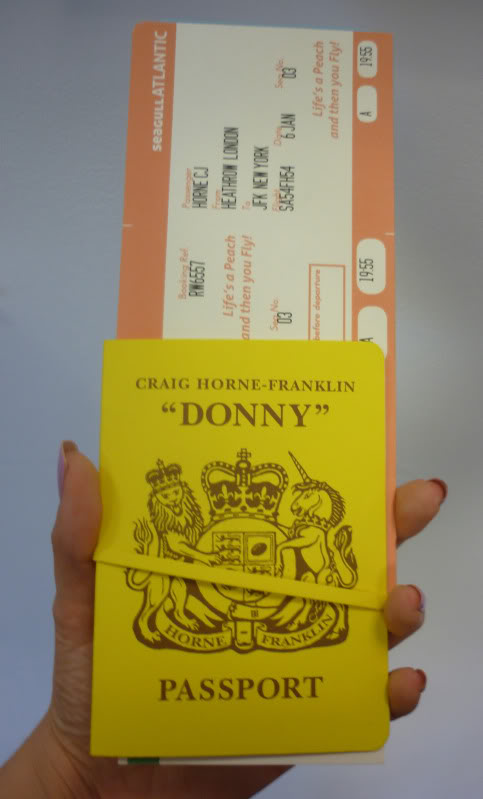 Turning a corner in the exhibition brought me to some book cover design. I had already seen the making of some of these, posted up on the studio wall for crits… 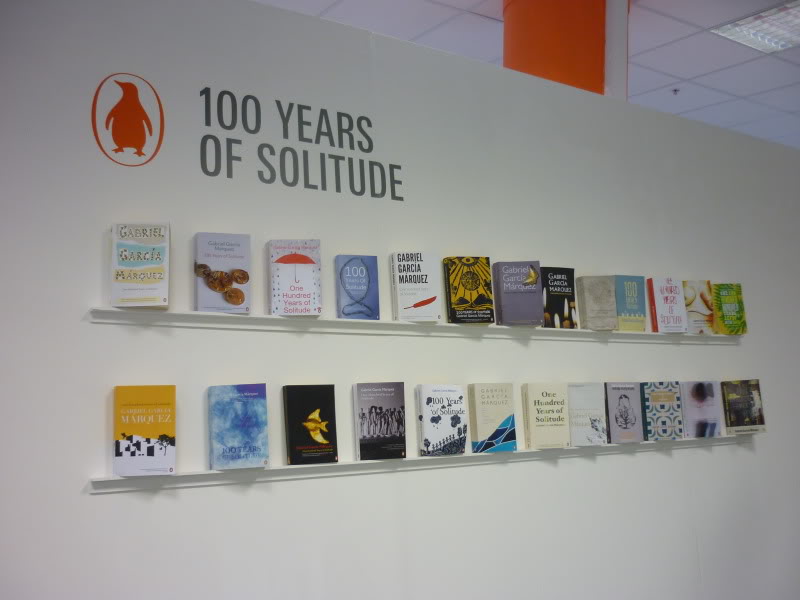 My favourite 3 are below… 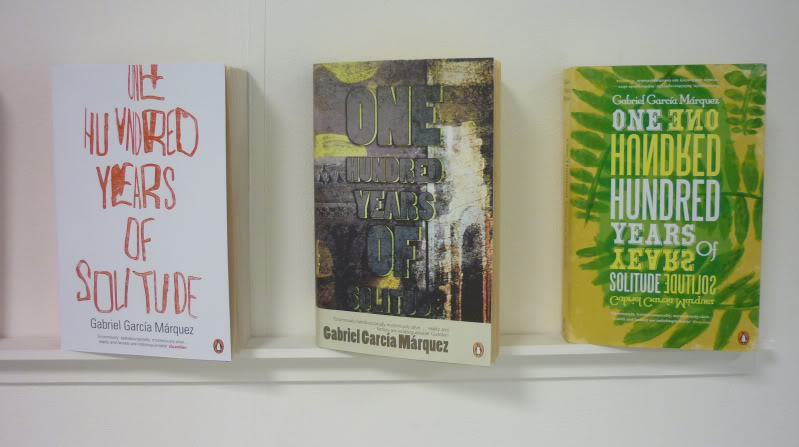 … not sure about all of the owners of these books as there were no names(so I have had to look through a lot of websites), but I love the typographical approach used by all of them.

There was also book covers for James and the Giant Peach, of which these were my favourite: 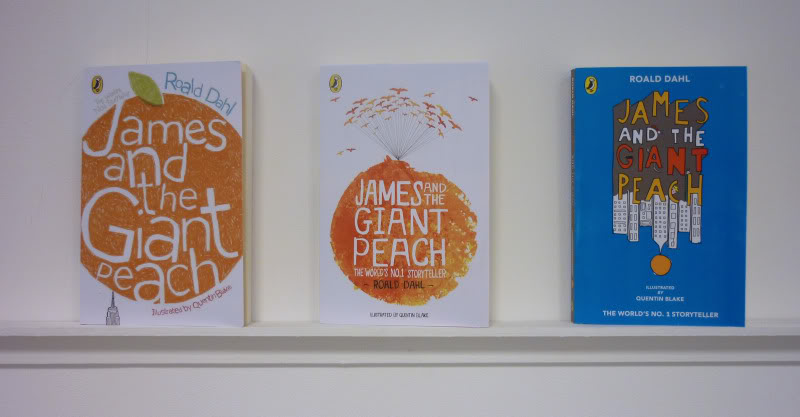 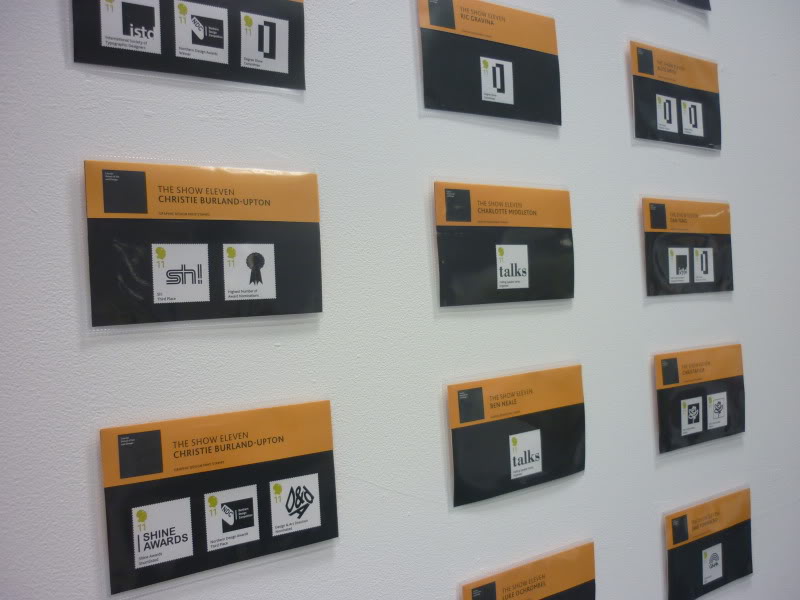 Another great idea/nice touch was the creation of these achievement stamps. Awarded for being a show committee member, talks series committee member and of course for winning design awards such as istd and D&AD. Christie Burland-Upton has definitely been a busy girl with the most stamps I think I saw!

Which leads onto the Show Elleven book – Structure & Chaos 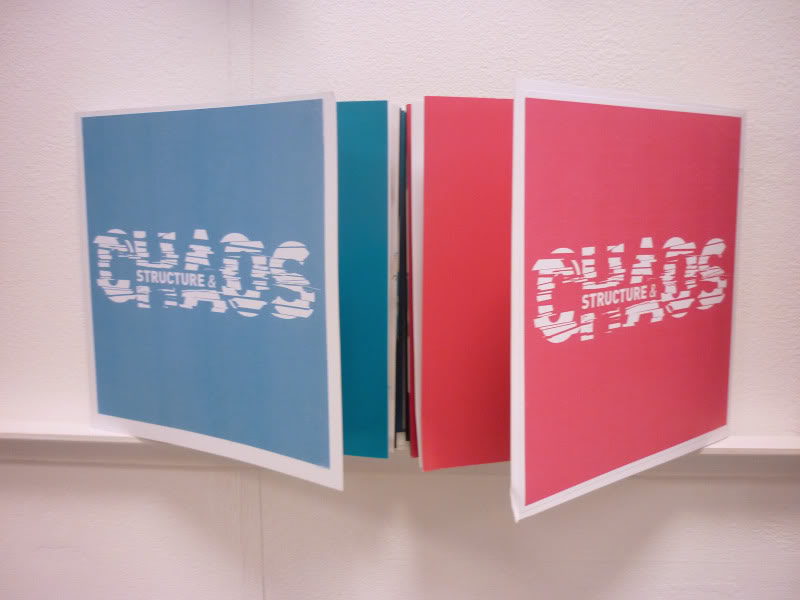 An interesting little book, with content produced by the students… (cool examplez by Anna Sangha here and Sophie Adams here) 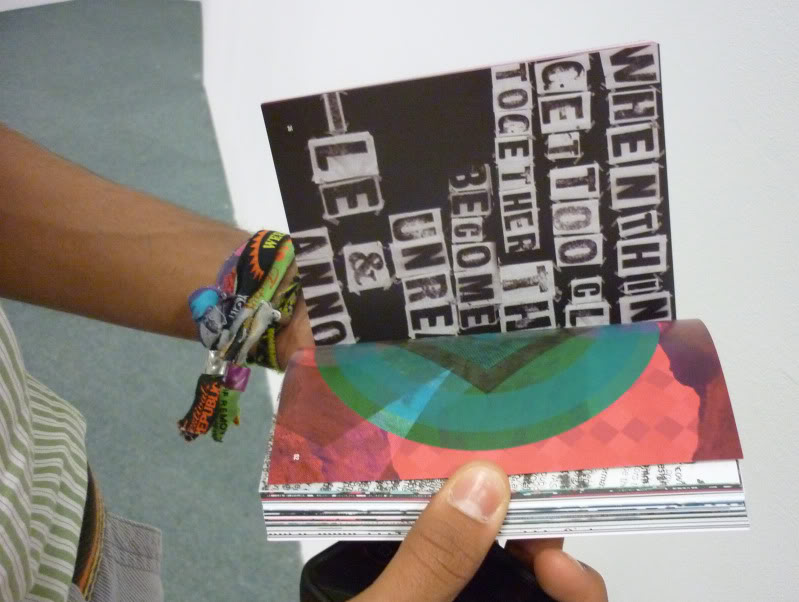 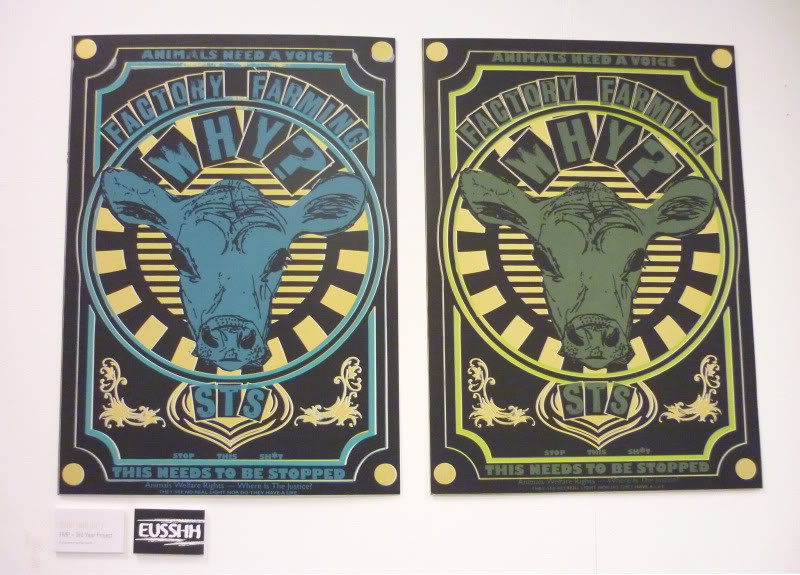 By Alex Scott (Who is from the same town as me! It’s a small world…)

Back in the main section… 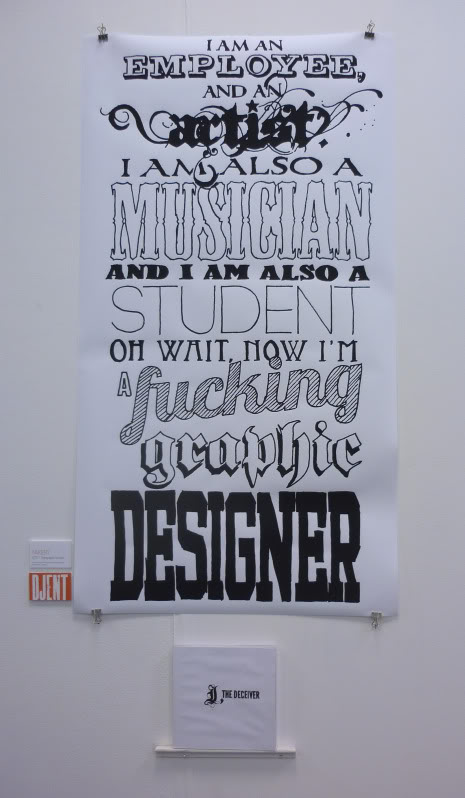 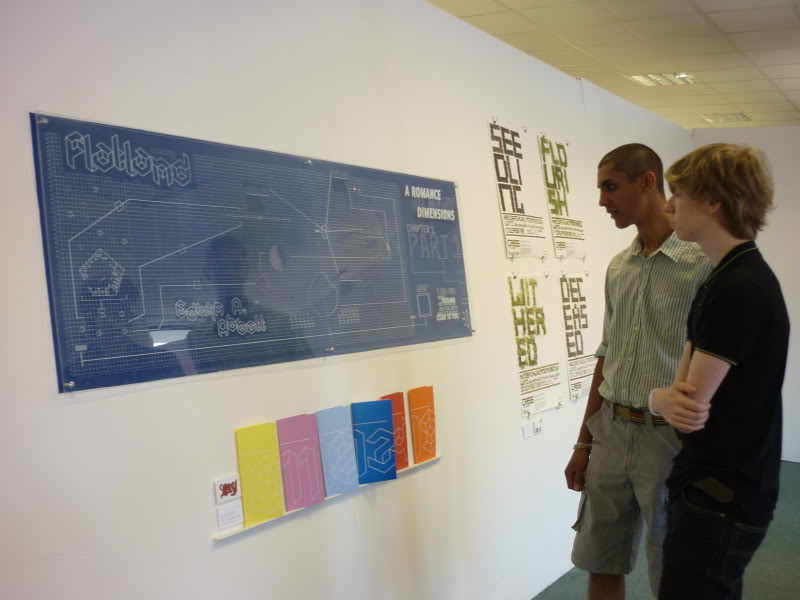 … and I was hypnotised by his FMP entitled Second Look….

Like many other projects in the show, the photo really doesn’t do it justice! The optical illusions in his book were amazing and also really disorientating haha 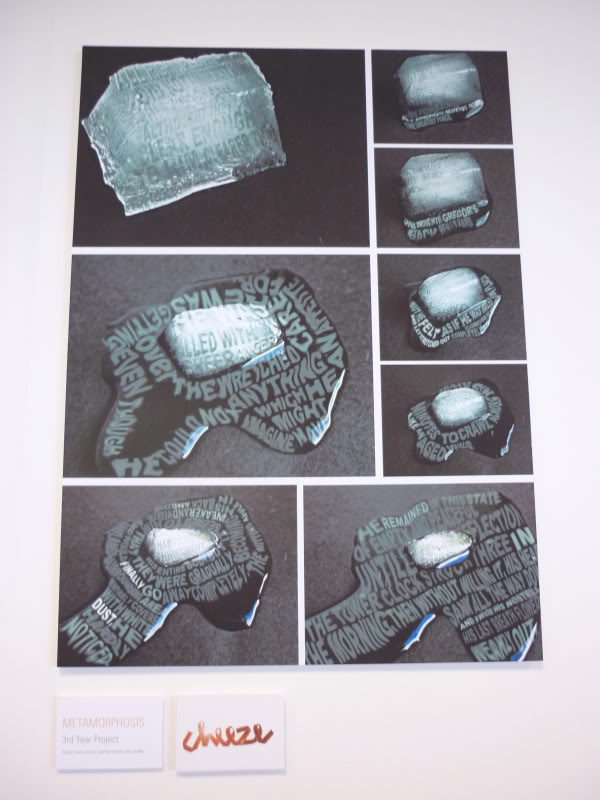 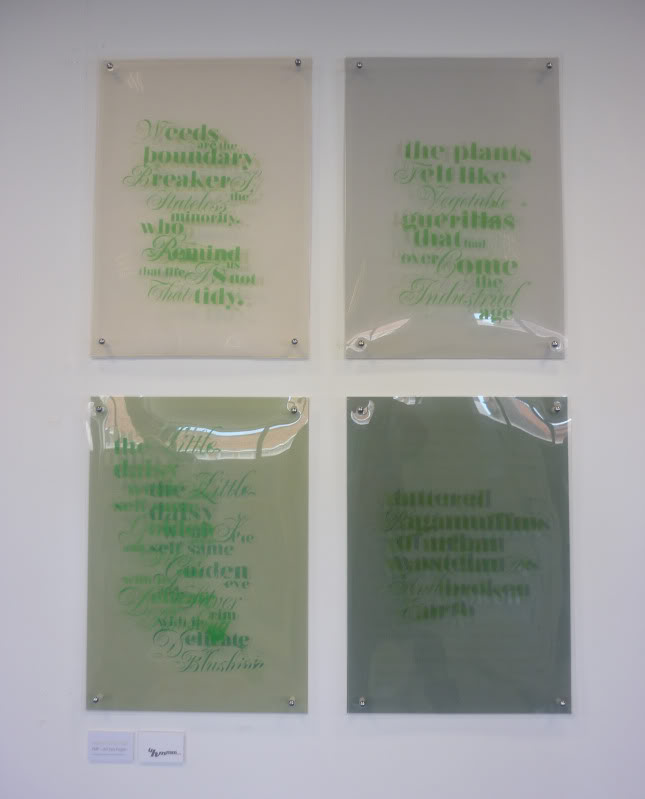 Charlotte Middleton’s Family Tradition project had a really nice feel due to the use of layers and screen printing. (Photo does not do it justice!)

And now for some corridor work… 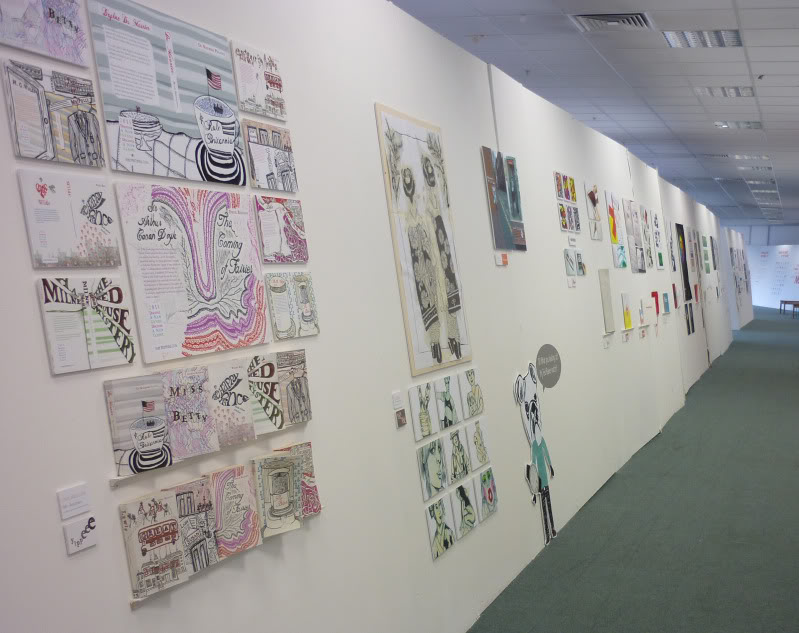 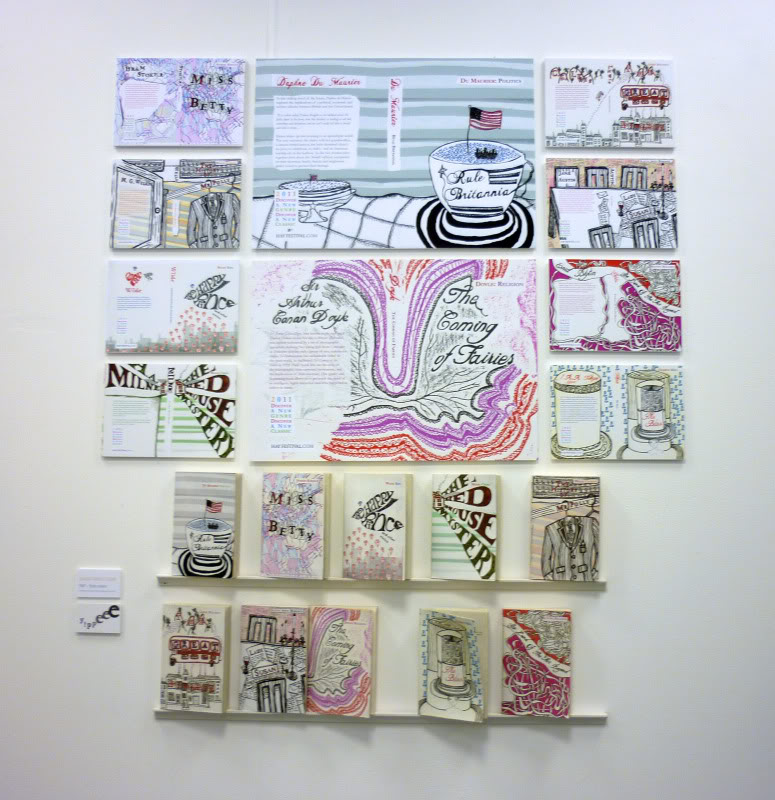 … by Francesca Foster. A really nice feel as an overall series. 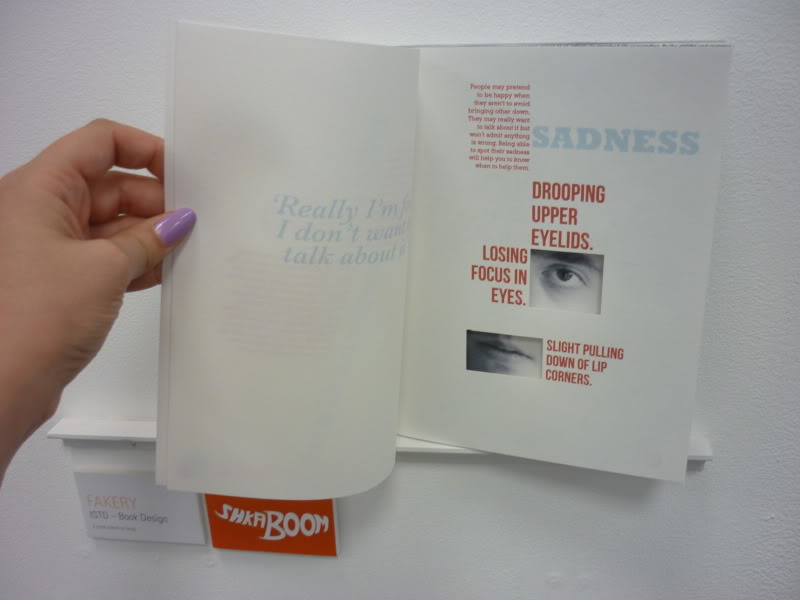 Keeping with the red, white and blues, Jake Townsend questions the ‘American Dream’… 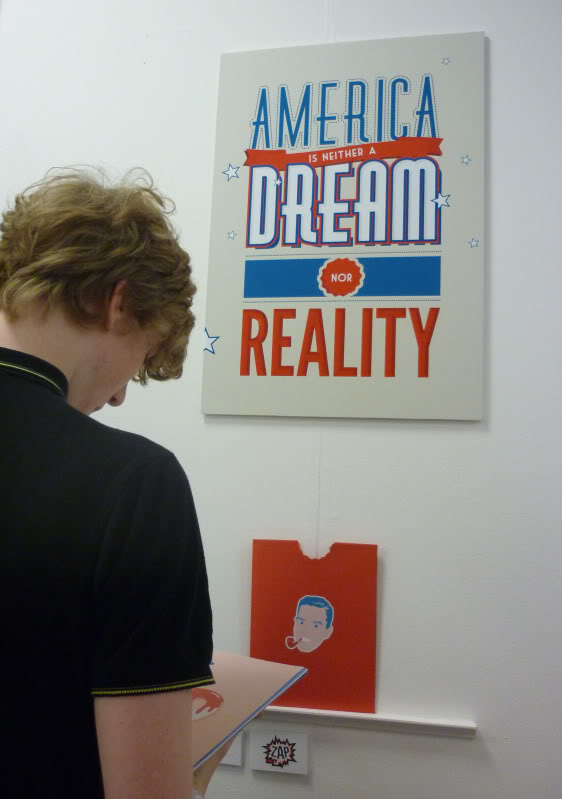 … and last but not least, a creative manifesto by Emma Benwell on how Silence is Underrated. 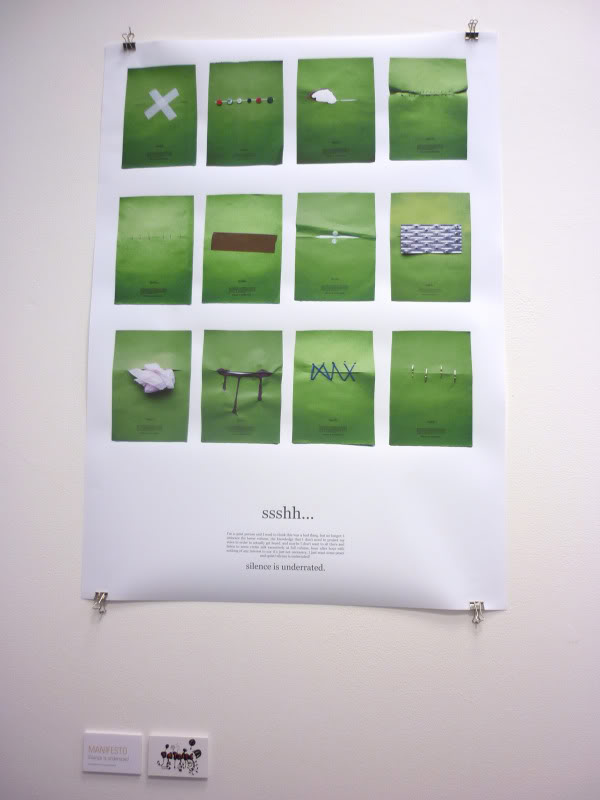 And that is all that I have space for… but there was so much more great work on show! If you like what you see here then you should definitely visit the show in person…

After visiting the show I am now feeling a bit under pressure to do some amazing work and also motivated because I want to reach the same standard the 3rd years have achieved. I really enjoyed the show and although it is a long way off yet, I’m already looking forward to making Show Thirteen a show to remember (and not only because it is an ‘unlucky number’!

Lastly, Good luck to all of the 3rd years graduating this year – I really hope all of the you will be successful in your chosen path!