I can’t believe it’s been over two weeks since I last posted! Time is flying too fast, I mean it’s almost December! That crept up on us quickly, hey?

I’ve been a very busy bee recently and have nearly finished two projects since I last posted! The first I am going to show you is the Limited Edition poster brief for Visual Expression.

We were asked to choose a topical news article (and swap it with the person next to us) and create a limited edition of 6 posters expressing our opinion on the article. I was lucky to get an article which is quite close to my own situation; ‘Internships: the scandal of Britain’s unpaid army’ from The Guardian (you can read it here). The article is about internships in general but as a creative student it is something I have had to think about. It seems that there is a vicious circle – you need a job to get experience but you need experience to get a job. I’m not going to ramble on too much because I have spoken about this before and there’s a lot I could say on this topic (check out Jessica Hische’s flowchart) but basically my opinion is that students are being exploited and should be paid to work! (I also understand that some studios cannot afford to pay their interns… I am aware of both sides of the coin, folks!) 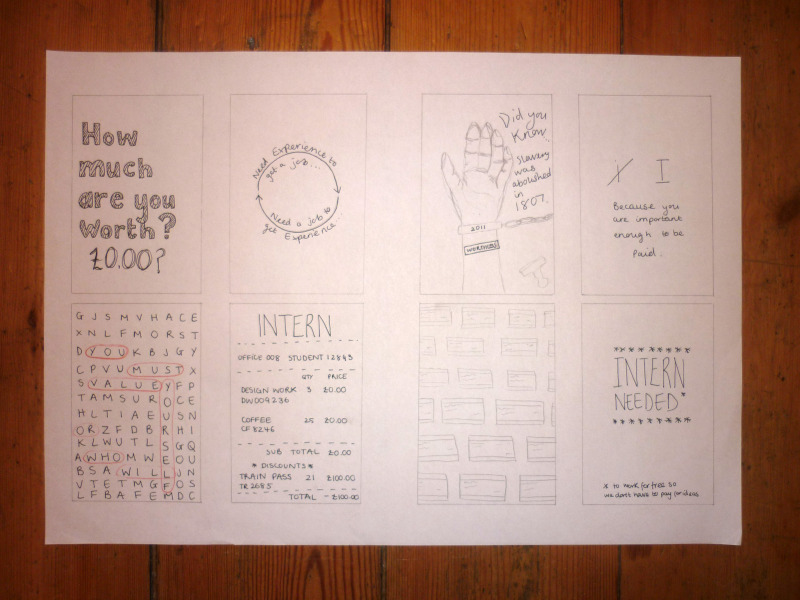 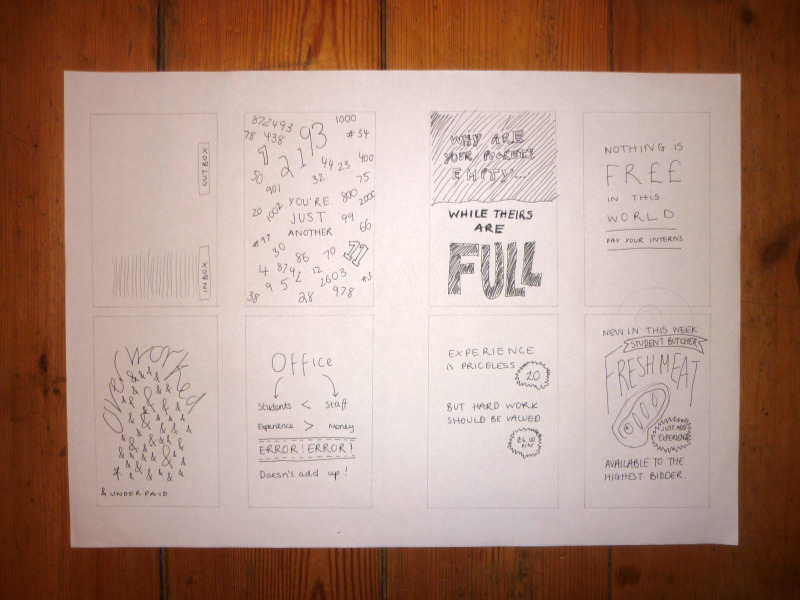 My tutor, Philippa, thought that I could produce a strong visual from the student butcher shop idea and so I decided to develop it further. I looked into butcher shop vernacular, branding for butchers shops, sign writing and typography… 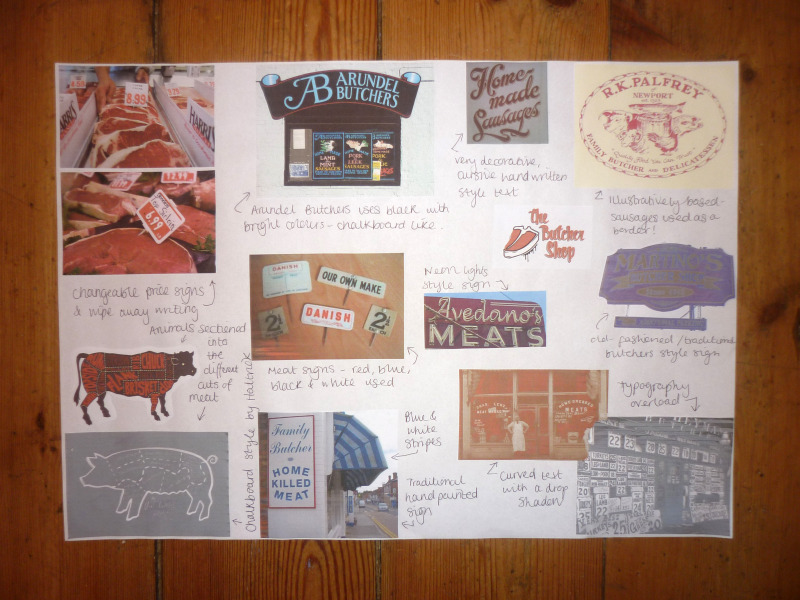 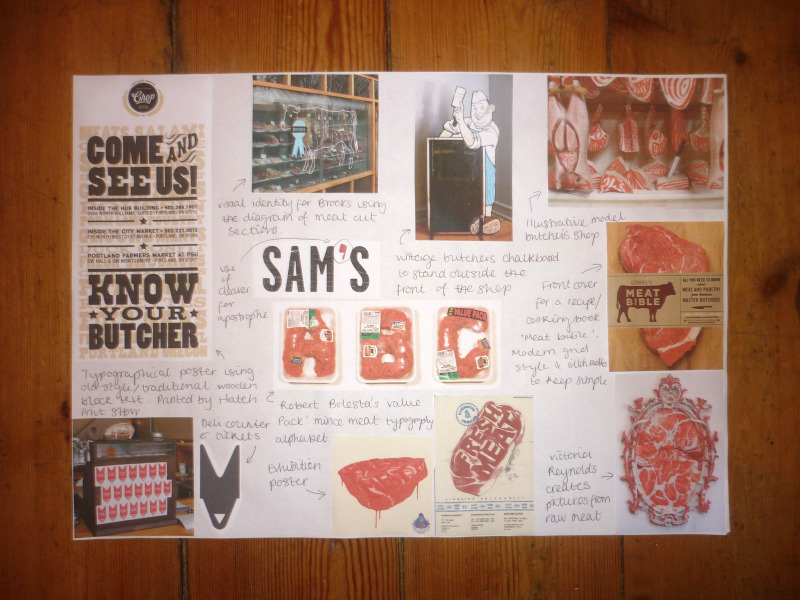 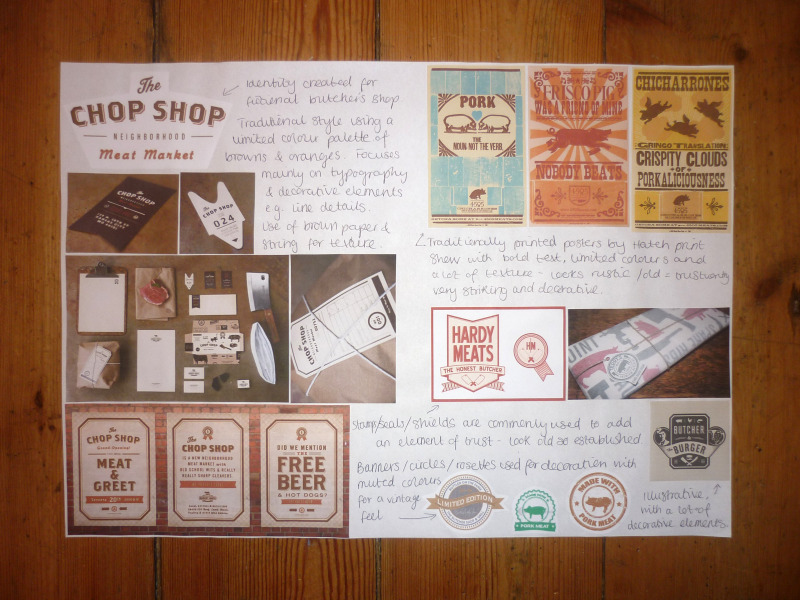 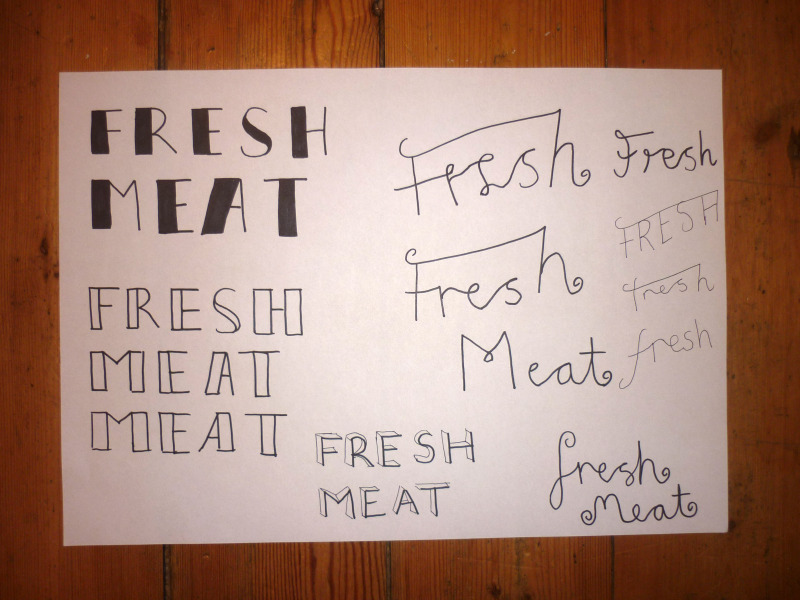 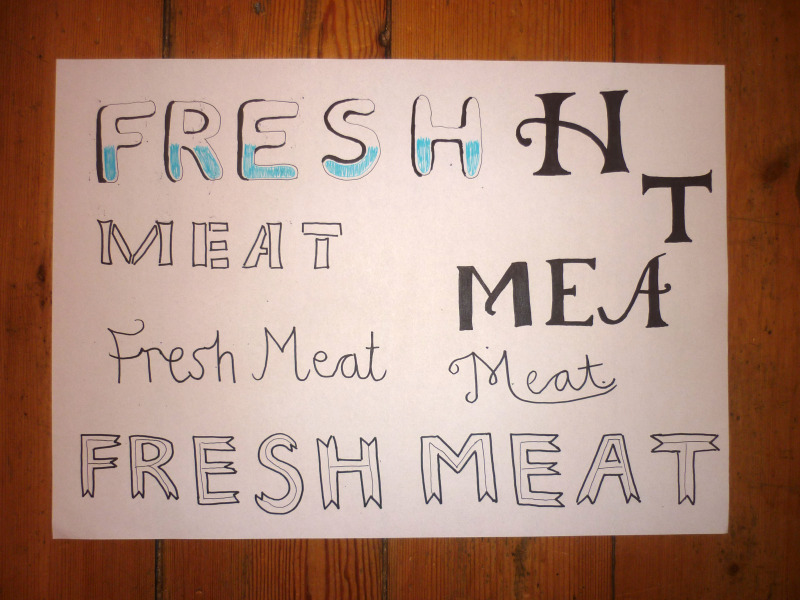 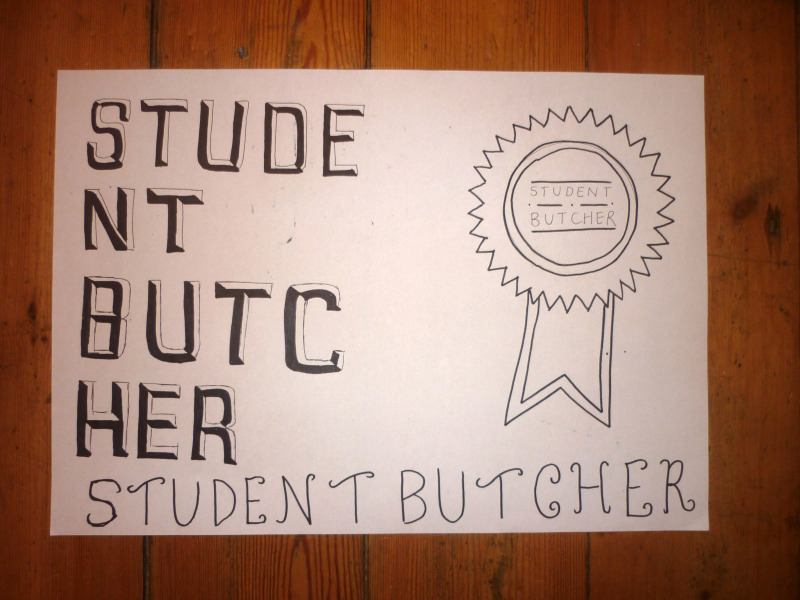 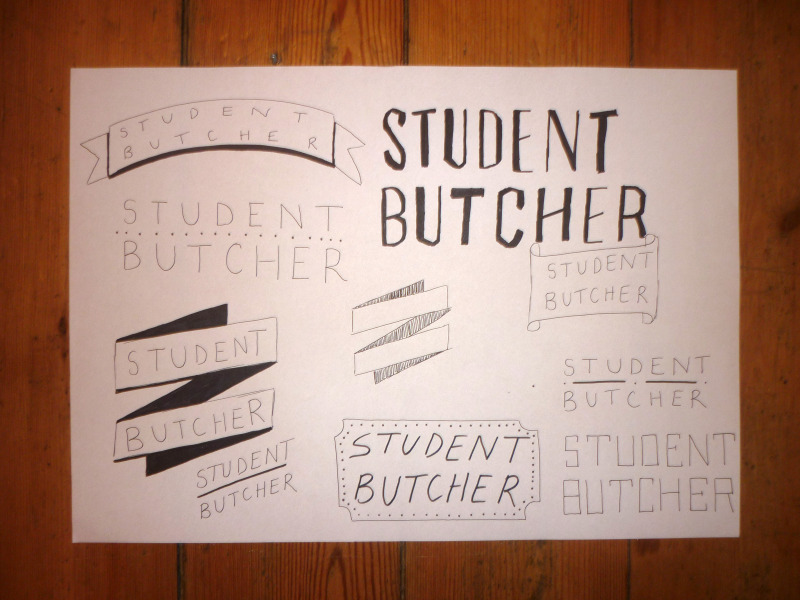 …and also tried my hand at some calligraphy – a first! 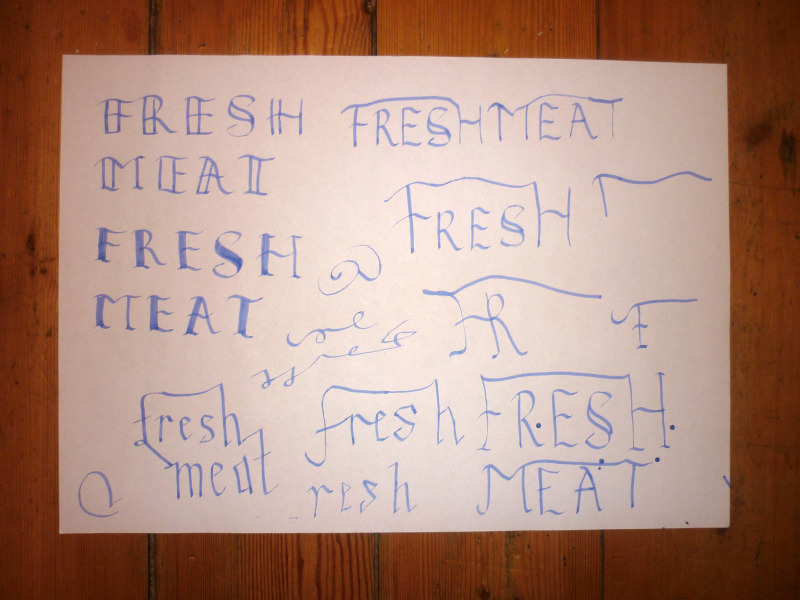 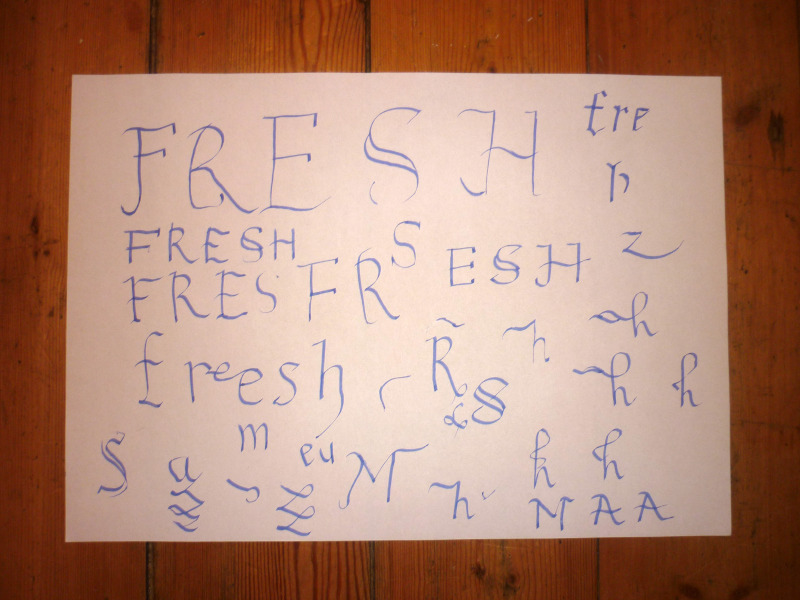 I didn’t get on amazingly well with the Calligraphy pen but I’m glad I had a go – it makes typography by designers even more beautiful!

Something I am more practiced in though, is printmaking. Us second years have been in the print room practicing techniques for a couple of weeks now. I have printed some raw meat from lino and last week I had a play with the wooden type which was another first – blimey, I am getting adventurous! 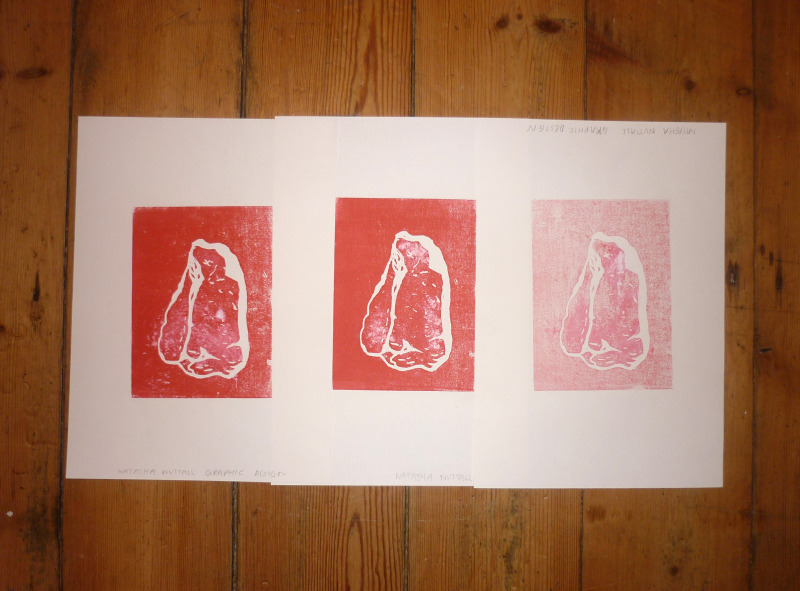 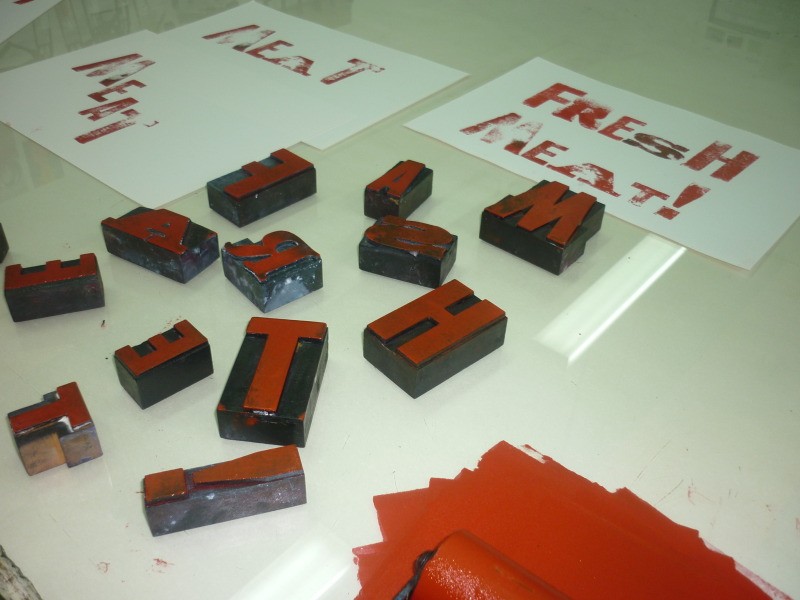 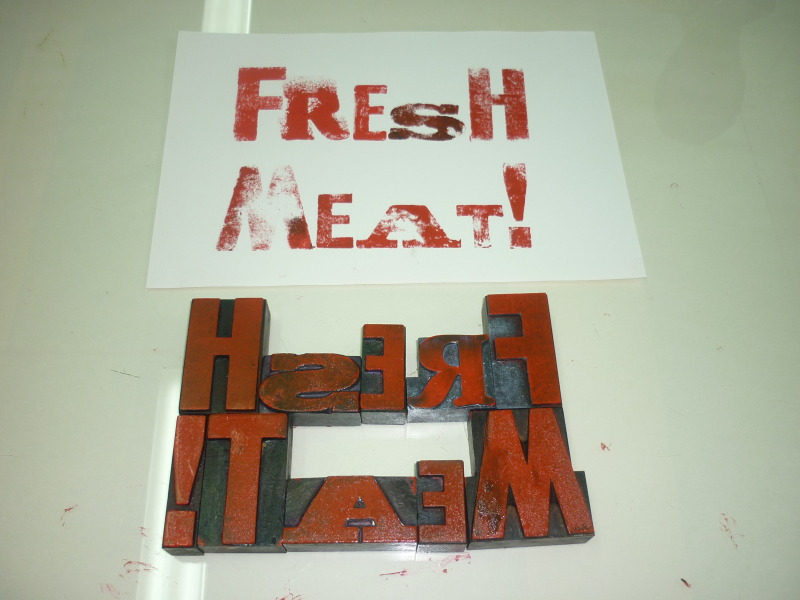 After looking through the butcher vernacular I’ve developed a traditional butcher shop feel for my poster using a mix of chalkboard/ signwriting typography, banners and decorative elements…. 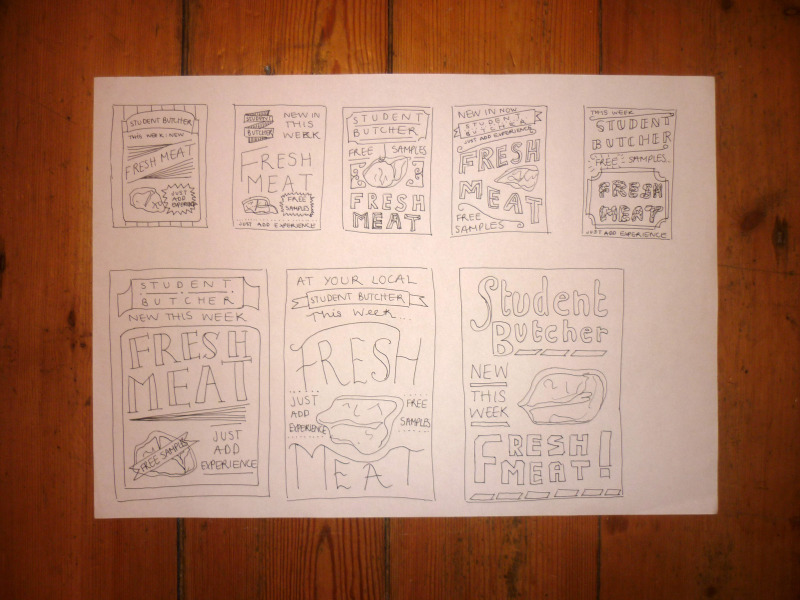 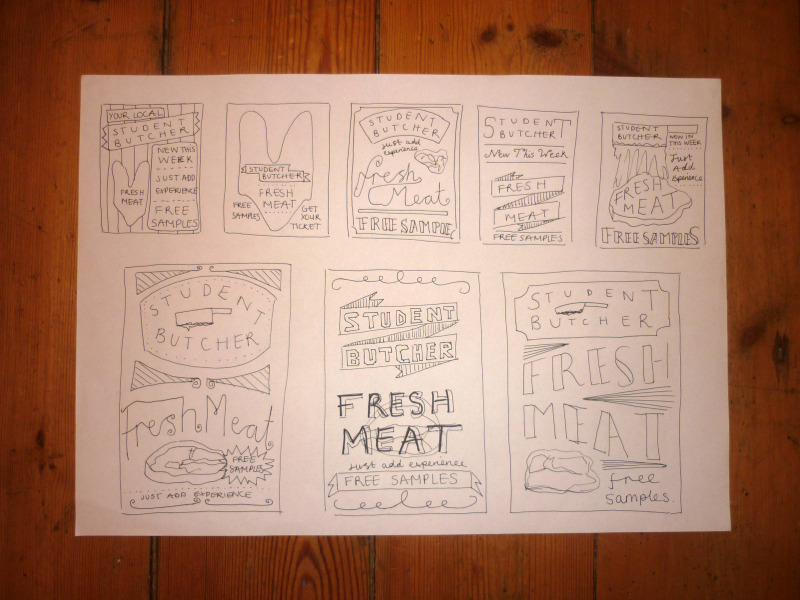 These are the 2 options I presented for a crit with Barrie. A traditional and a modern version. 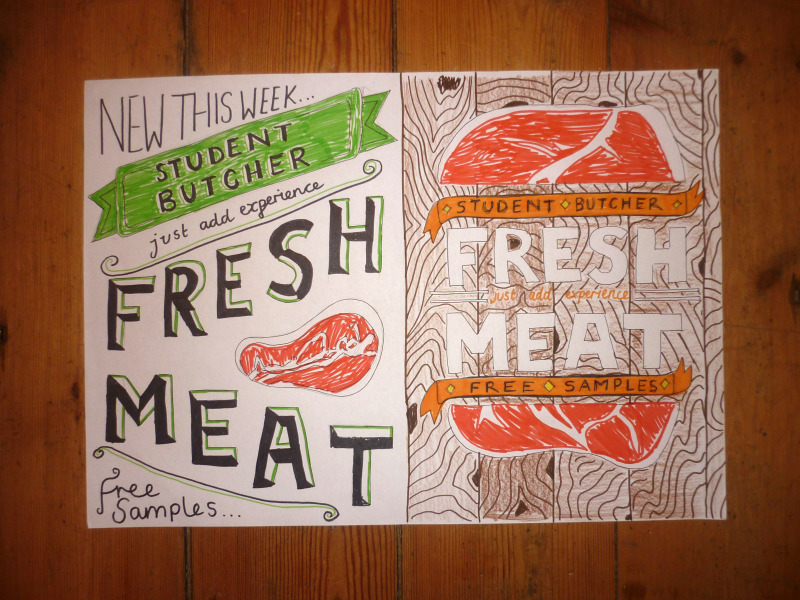 Barrie said he liked the red and white stripe of the traditional Butcher’s shop style and that I should try to re-create the Butcher shop image when it was at it’s height. 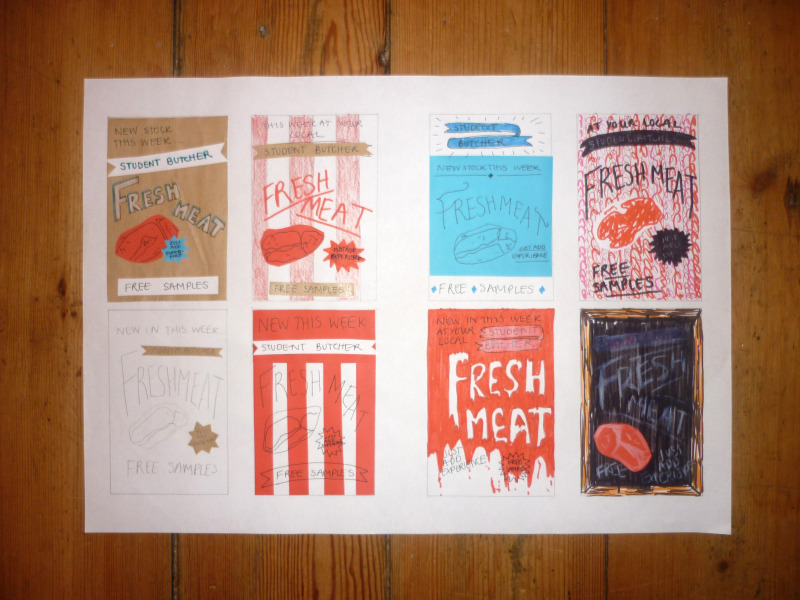 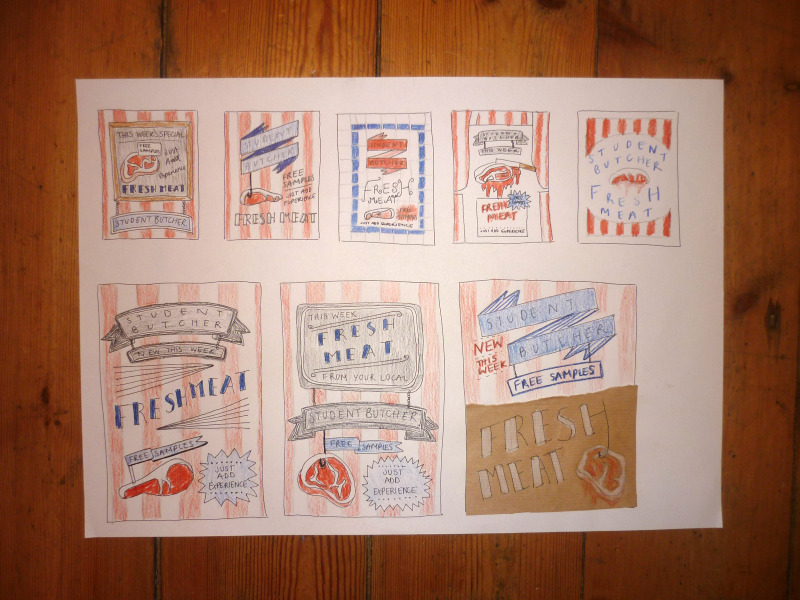 After drawing so many different combinations of the same idea I found it quite hard to pick one in the end, but…. Ta-Dah! 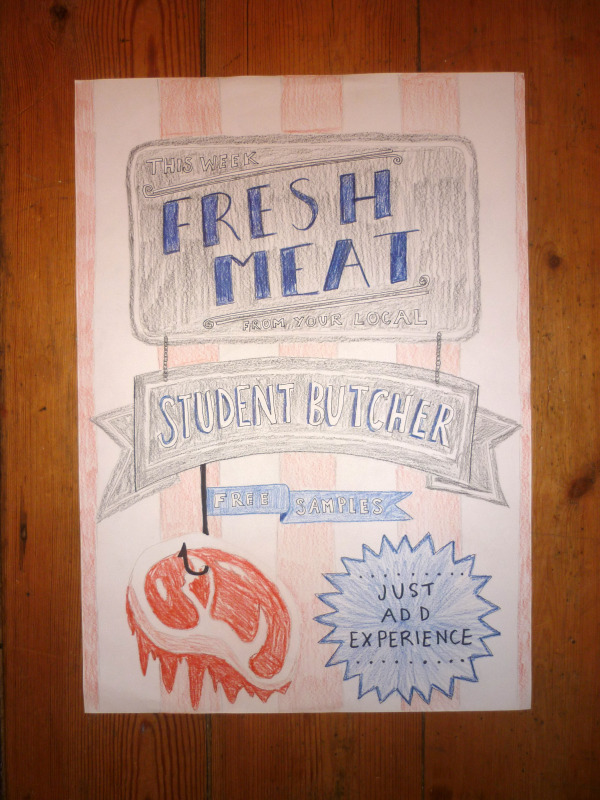 Barrie said I probably don’t need the dripping blood though, so I will probably get rid of that and obviously I’ve pencil crayoned it so when it’s printed it will be a lot bolder and fuller colourwise! The plan is to screen print it next week, ready in plenty of time for the deadline after christmas! Excitedddd 🙂

What is your opinion on the article? Should interns be paid? Are students being treated like pieces of meat?

One Flew Over The Cuckoo's Nest: Final Covers