For Day 2, Jack and I were joined by two familiar faces; Helen and Danielle! 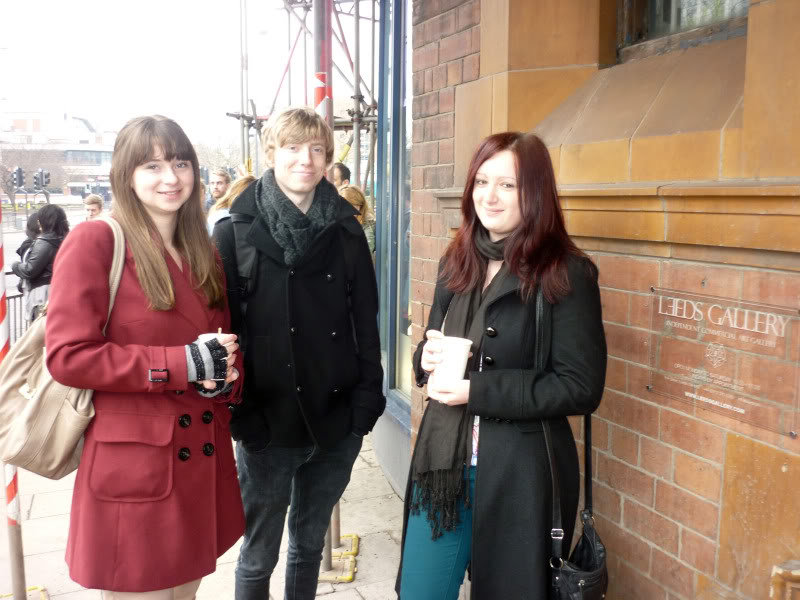 We managed to get really good seats, but consequently was sat next to this guy who kept telling jokes and pulling funny faces! Oh Chris – we can’t take you anywhere! 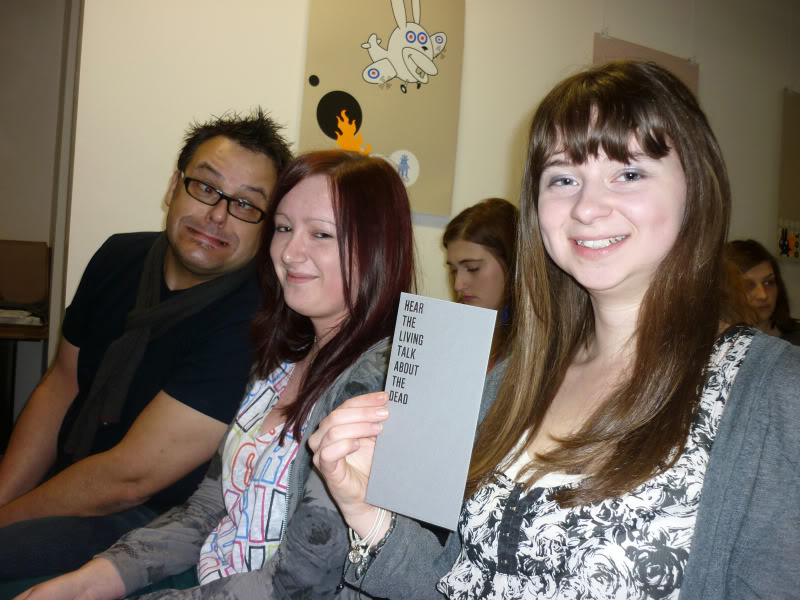 On our seats we found some goodies: 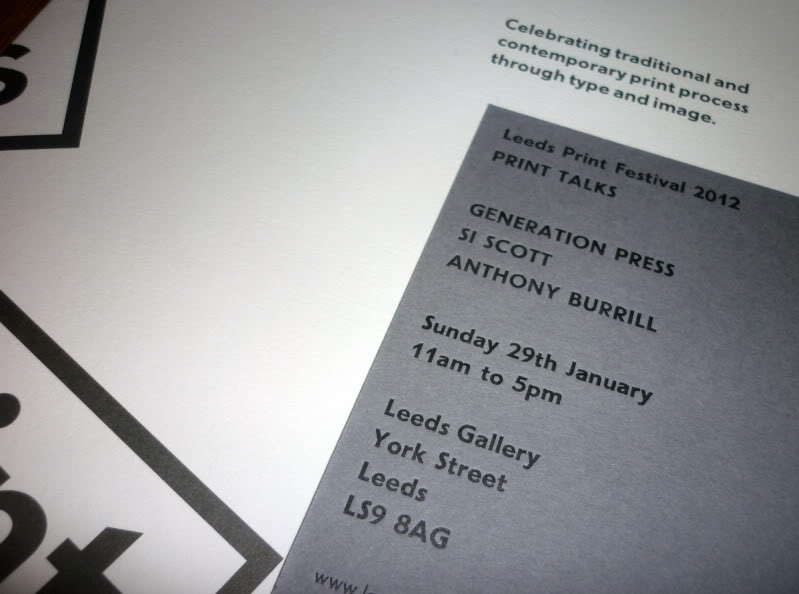 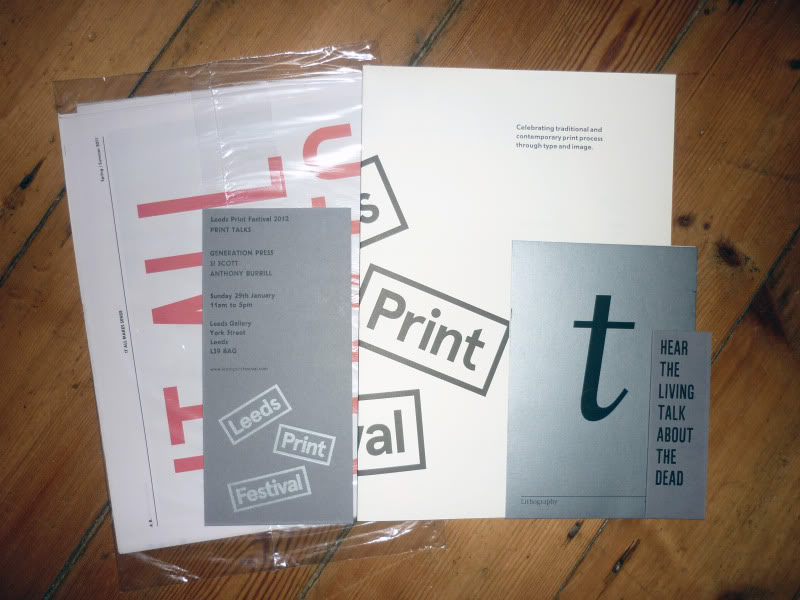 The little pack includes a LPS 2012 poster style programme, a ticket, a lithograph letter from Generation Press (I got t for Tasha but other letters were available to spell Oil & Water collectively) and a newspaper from Anthony Burrill! 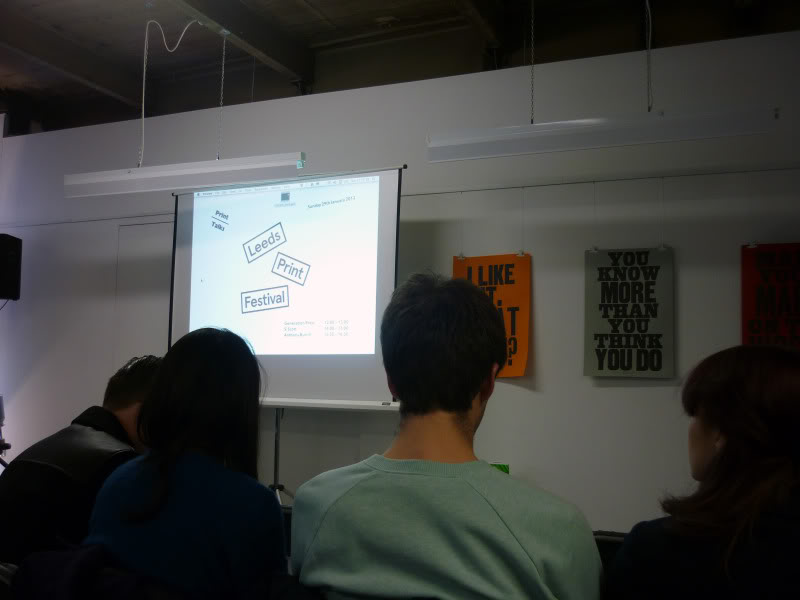 I wrote 21 pages of notes from the 3 talks, so I’ve tried to condense it a bit. 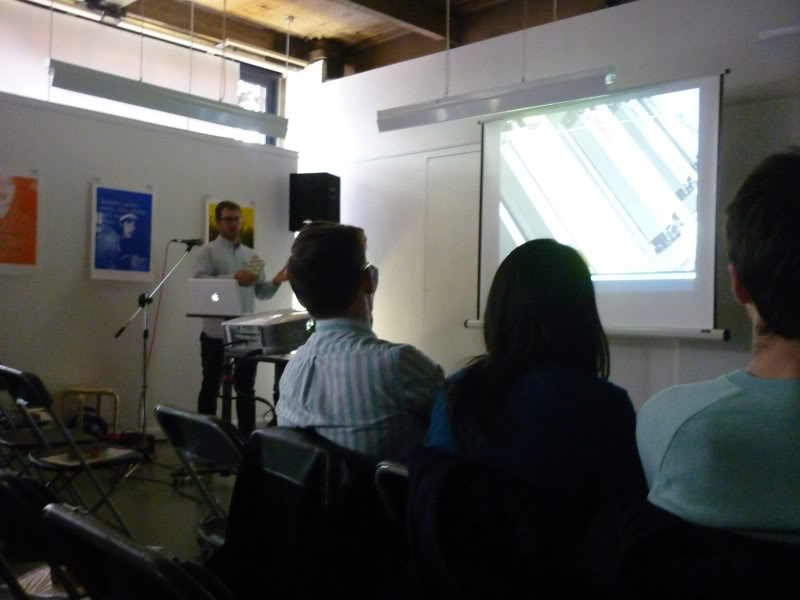 I was not aware of Generation Press before but I’m really glad I was able to learn about them because their story is lovely and their work really reflects their passion.

Generation Press is a printing company which has passed through 4 generations of a family. When Paul, who was accompanied by Anand (a recent graduate from Leeds College of Art), took over Hewitt & Sons he went against the one piece of advice his father gave him; don’t change the name. Generation Press was born! He explained that the reason Generation Press works so well is because of it’s structure – like a chain where everyone works together rather than having superiors etc. With the experienced printers from Hewitt & Sons continuing, Generation Press are able to produce the best print in the most environmental and ethical way.

You can tell that these guys really love print and have produced some great print jobs using a range of striking finishes like colour edging: 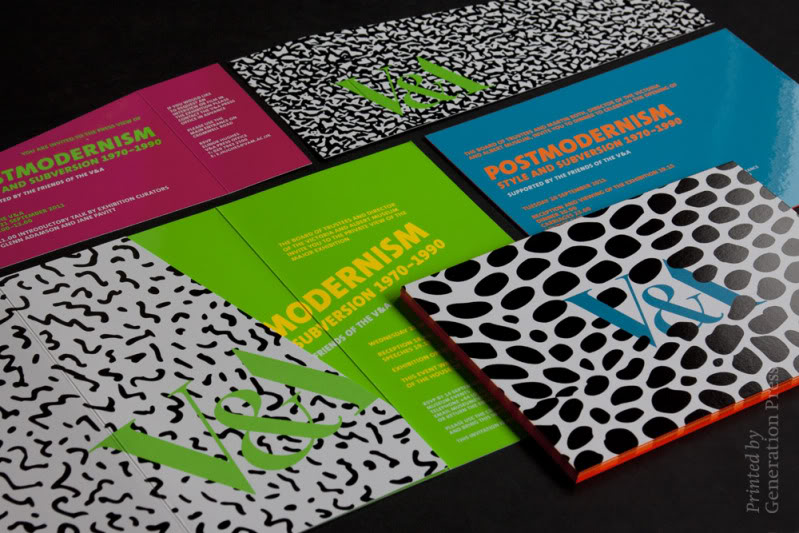 Paul says that it is the finishes which gets work noticed and told us an anecdote to prove it… Generation Press printed coffee company Has Bean’s business cards but the coffee guys didn’t understand why GP were getting so excited about foil blocking and embossing (I have had this reaction from my non-Graphic Designer friends many times before). One of the bosses was on a business trip to Singapore and stayed in a hotel with the tradition of leaving a business card in a bowl in the reception. The receptionist told Has Bean’s boss that his was the most beautiful she had seen and that she had never spent so long looking at a business card. Just proves that it’s all about the details when it comes to making print stand out!

What make a great designer according to Paul? ‘One that engages in the process of printing! Viva la printing!’

Next up was illustrative typographer, Si Scott: 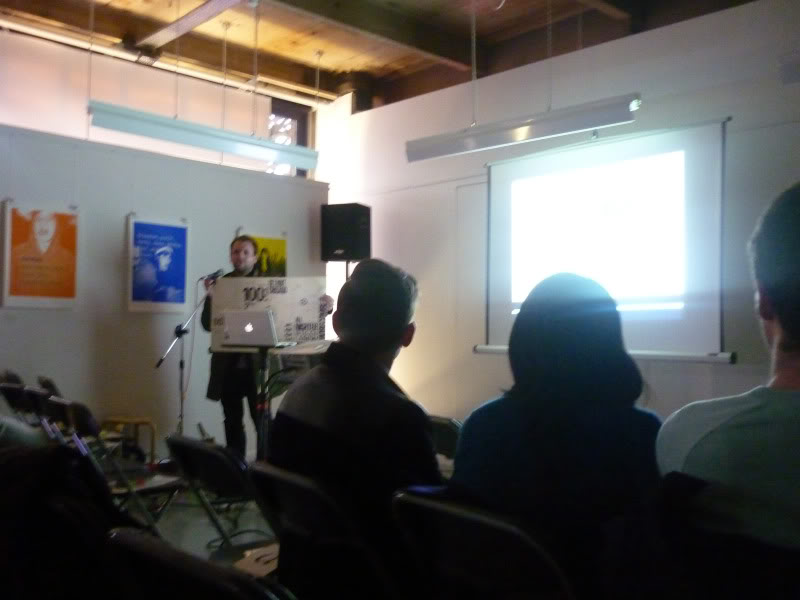 I was already a fan of Si’s work, so was looking forward to hearing from the man behind it. The first thing that struck me was how incredibly humble he is. He mentioned several times that he didn’t think his work was amazing, that there was a lot of things he would change and he was never 100% happy with anything. He has designed for a lot of big brands including Selfridges, Tiffanys, Madonna, Coca Cola so could have boasted for the whole hour of the talk, yet he remained very down to earth and a genuinely lovely bloke – he says he loves doing the work but isn’t interested in the industry. At college (and since) he never copied from books like his peers, but tried to do his own thing which I think makes his work very recognisable and unique.

His work is usually just black and white, but doesn’t need colour due to the amount of detail. Hearts and animals are a big theme, along with music quotes from bands such as Joy Division – ‘Love will tear us apart’ 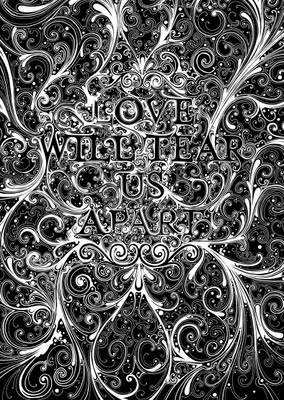 He told us some interesting and funny little anecdotes:
He likes to work with graph paper and ink rather than computers and once spent 3 days on Photoshop cutting out sections for a poster before a friend pointed out he could have just used the magic wand tool!

He’s been working for himself for 6 years now, in which time he hasn’t had a holiday. He went to New York for a stag do and spent all day in meetings, catching up with the stags in the evening. He is a workaholic!

He likes doing charity work to help and because they usually give him a lot of creative freedom. He always tries to give people more than what they asked for, for example… The 100 Project asked him to design a print for them to auction. Instead of just drawing something, he made a 3D paper butterfly and framed it in a butterfly specimen frame (below)- how lovely, right? (Attention to details again!) 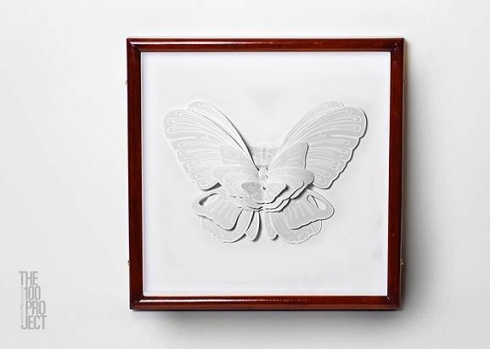 I think other than his work and obvious passion, the best thing about Si is that he doesn’t take himself too seriously – a quality that makes him interesting to listen to and seem like someone who would be a great laugh as a mate.

And to finish, Anthony Burrill – who has a reputation for being ‘the nicest man in Graphic Design’ even though he says he is not strictly a graphic designer: 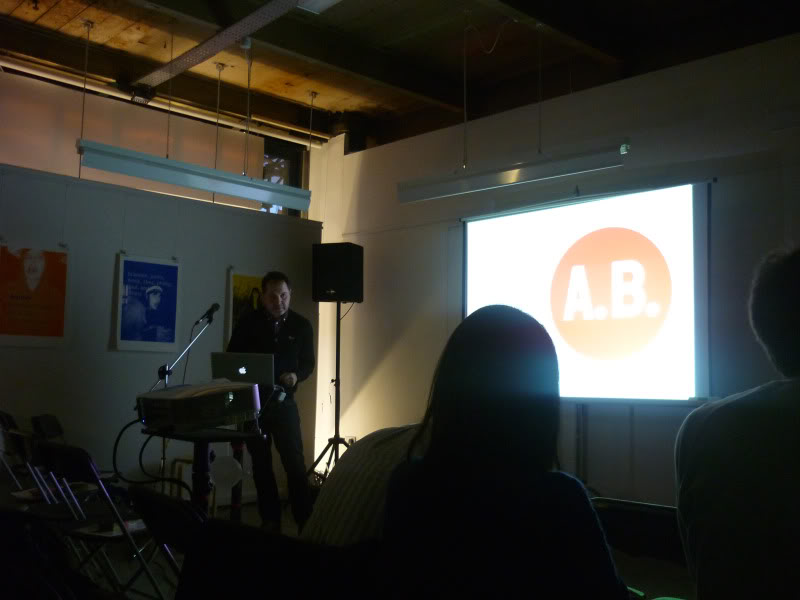 Anthony Burrill’s typographic slogan posters have become iconic and appear on the walls of graphic designer’s and non-creatives alike. He made us all laugh when he admitted he occasionally googles himself and collects images of his ‘Work hard & be nice to people’ poster being displayed in people’s lives. It’s really interesting to see that the poster appears in all kinds of places around the world (and even as a tattoo on a Californian lady) because I had never thought about that before… your one piece of design could be on the wall of a studio in London or in a toilet in Singapore. 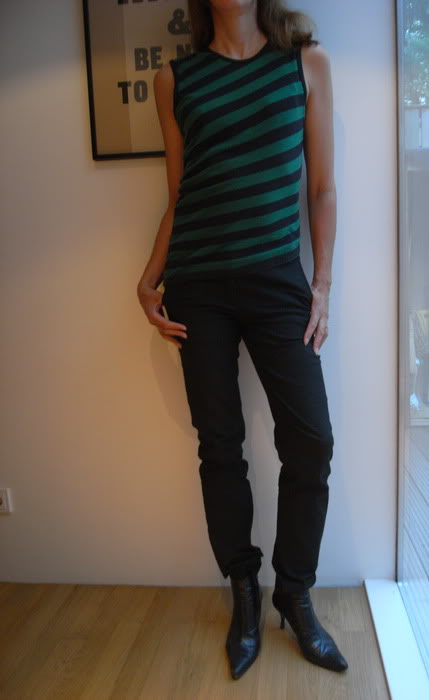 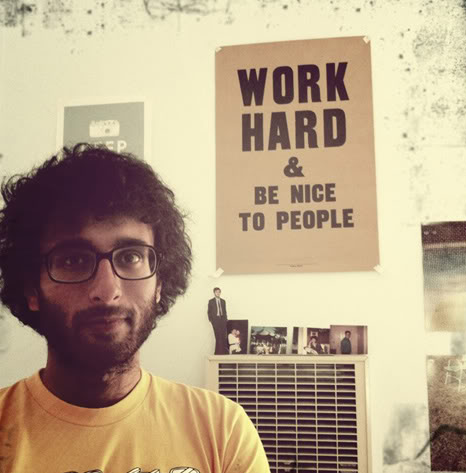 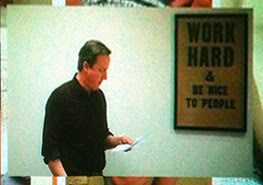 Even our Prime Minister is posing next to Anthony’s poster!

The ‘Work hard and be nice to people’ poster was an edition of 300 printed in Anthony’s countryside retreat of Rye by Adams – a family run printers. Anthony explained the phrase was overheard when in the queue of a supermarket; an old lady was talking to a checkout assistant when she said that the secret of life was to work hard and be nice to people. I wonder what she would say if she knew about the poster?

The rest of Anthony’s work has a very psychedelic and retro feel to it, using a lot of rainbow bright colours and shapes. Watching his slideshow, I felt like I had been transported back to the 70’s (even though I wasn’t alive then) yet his work is still contemporary at the same time – it’s quite hard to describe really! But just watch this:

I looked at Anthony’s work for my limited edition poster research and my favourite piece  has to be the ‘Oil and Water do not mix’ posters which were a collaboration with Happiness Brussels. Not only is it a striking poster, but also has a clever message, uses part of the problem in the production and aims to make a difference. 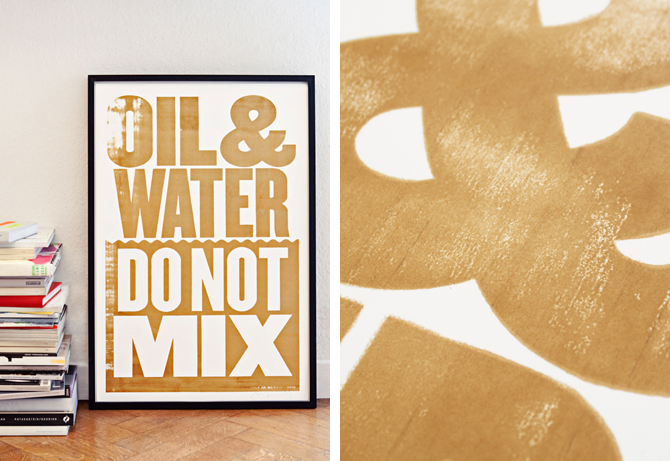 Watch the process for a better understanding:

For me, that’s what graphic design is about – communication and making a difference. 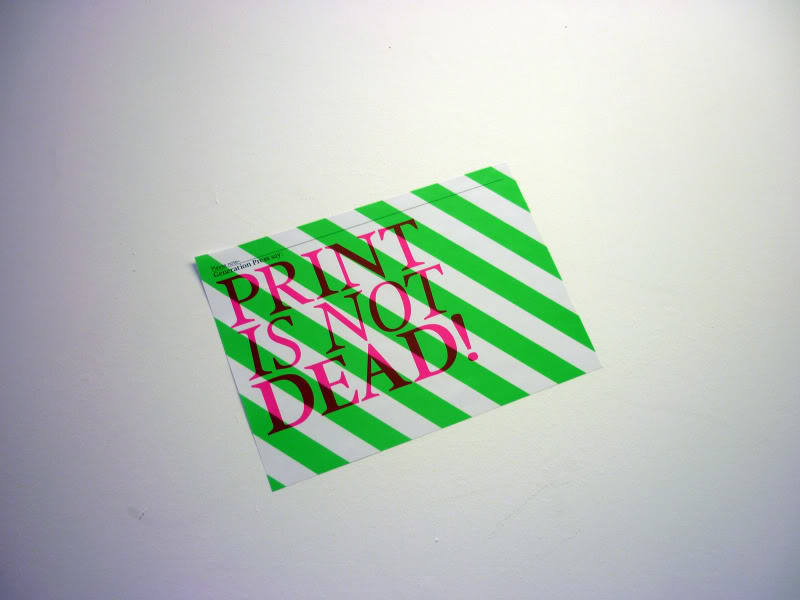 I had such a great weekend and left feeling so inspired. I can’t wait for LPF 2013!