On Tuesday I attended a rubber stamp workshop ran by the lovely Stephen Fowler. I blogged about it earlier for the course blog but I still have plenty to show you here!

I had heard of rubber stamping before as Lucy had one made professionally for her Limited Edition project, however I hadn’t really thought about using one. You’d be surprised what you can produce from cutting a rubber though… 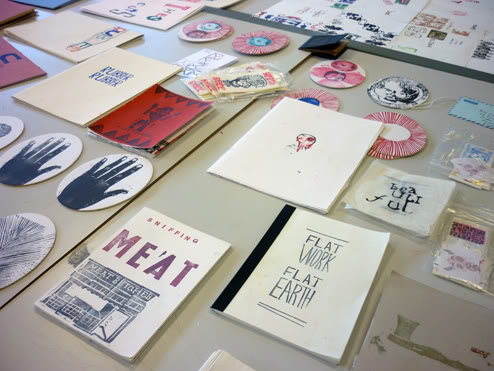 Stephen showed us some of his work and the different possibilities achievable  from using rubber stamps. There was some really playful results from combining different stamps, different colours and over printing different shapes. A lot of the work reminded me of print making as it has the same kind of effect – it’s essentially the same process as linocut but you don’t need the big Albion press. 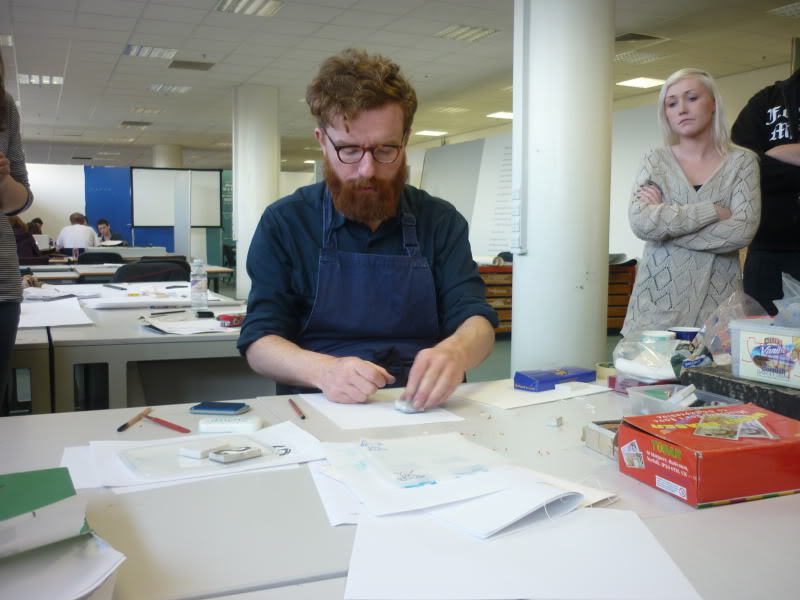 Stephen is such a character! He started to get really passionate about rubbers (WHSmith own brand are Stephen’s top tip!) which reminded me of us Graphics geeks and our discussions about typography. Who knows what outsiders think when they listen to our conversations!?  I don’t care though 🙂

After watching Stephen demonstrate the process, we were all keen to give it a go ourselves: 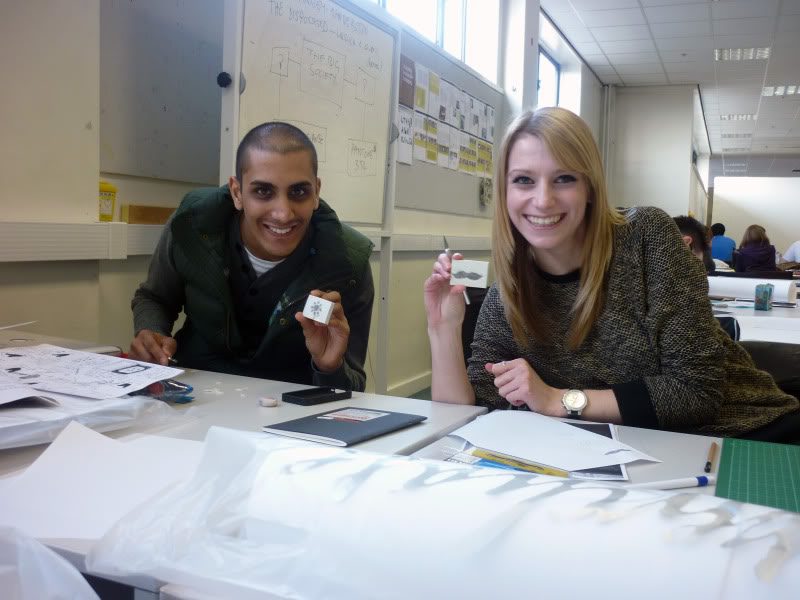 Sunjay with his Sun and Lucy with her moustache looking excited! 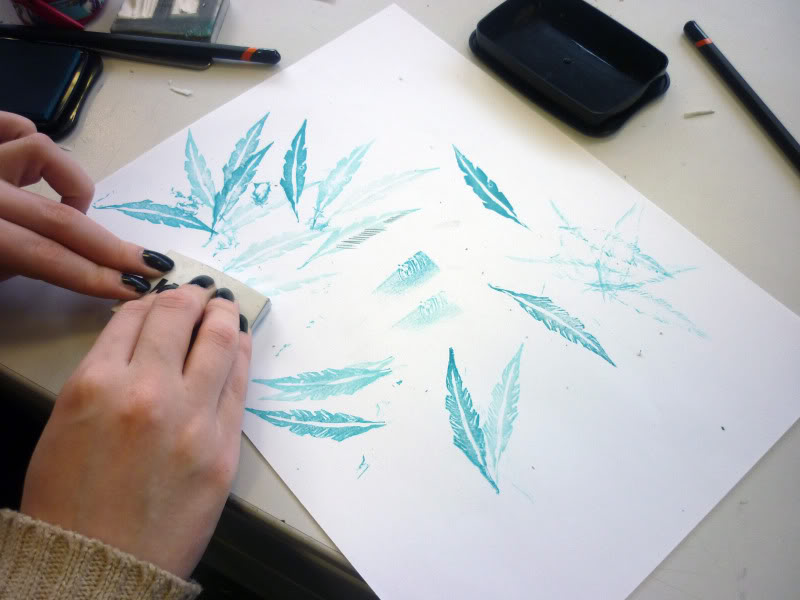 … and I really liked Tom’s illuminati inspired pattern (It’s triangles, of course I liked it!)

For my stamp, I cut a triangular pattern into the edges of the rubber and chose a bright orange ink  called Tangelo! The inks had some great names with my favourite being a light green called Pear Tart – as Philippa said, it sounds good enough to eat! 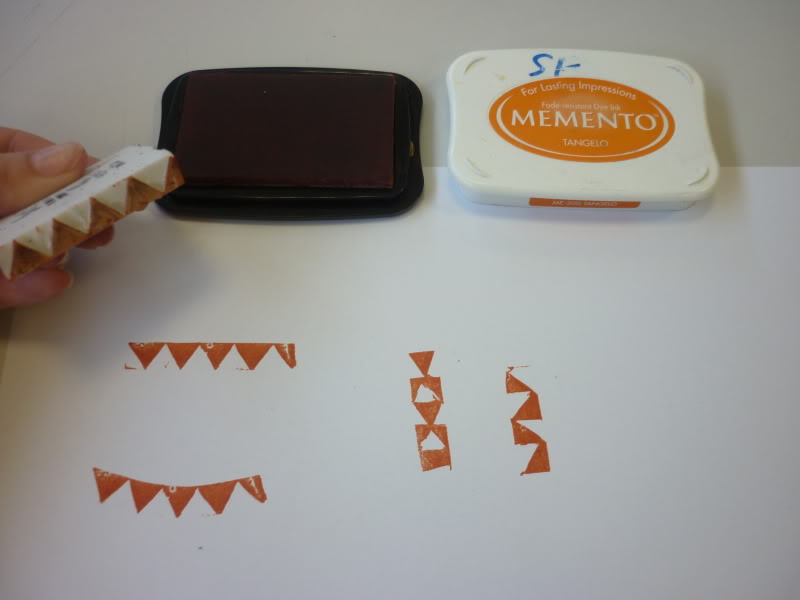 I had planned to try and form some letterforms from my triangles but it didn’t really work as well as I had hoped. 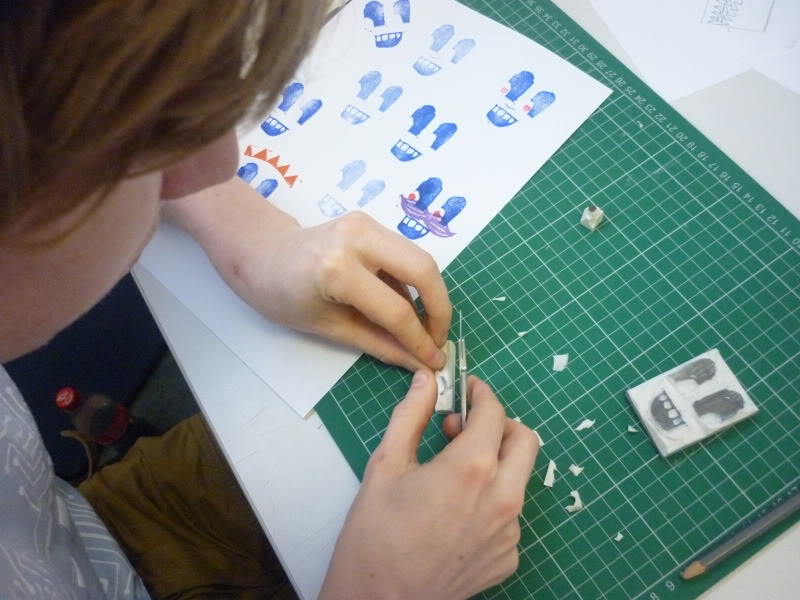 Meanwhile, Jack was creating accessories for his smiley face and Heather was planning an alien invasion… 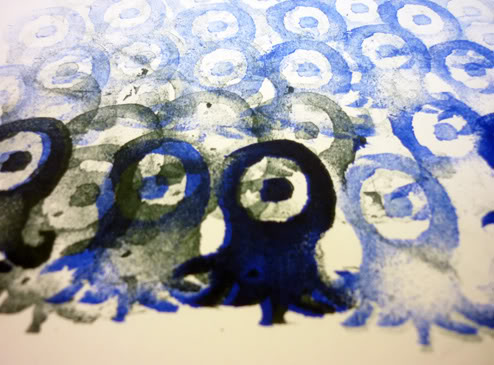 After a little play around with our stamps and the combination of inks, we all made little booklets and collected each others stamps(such a sweet idea!). I chose to make a concertina style book… 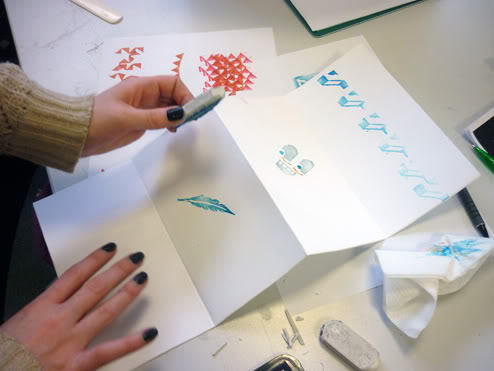 Amy stamping her feather in my book. 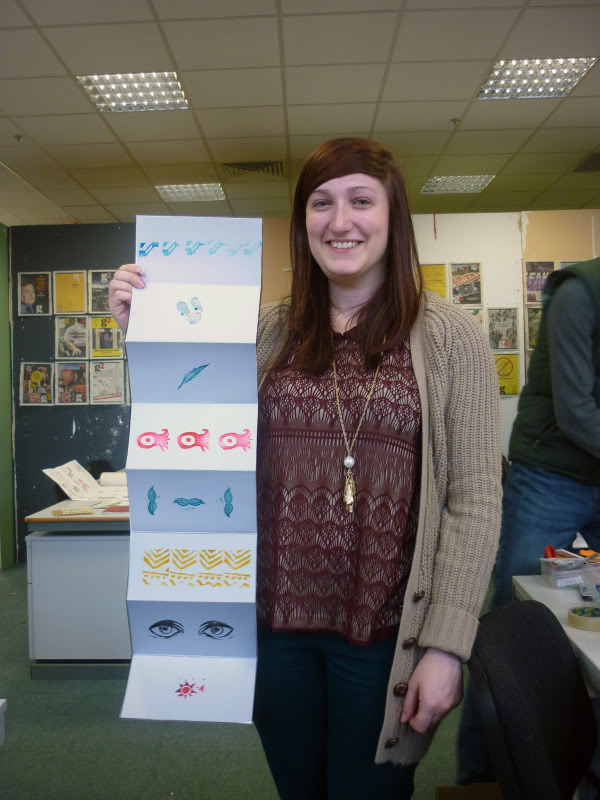 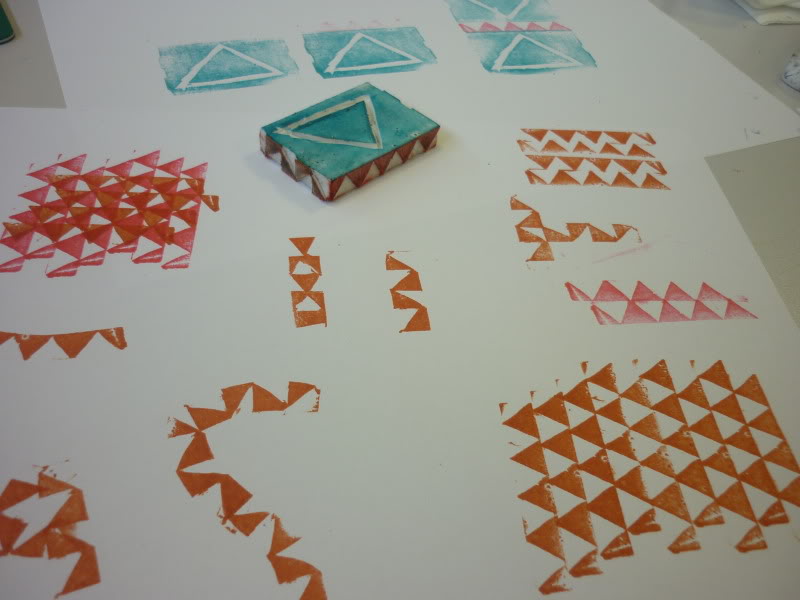 … and topped off with a matching belly band: 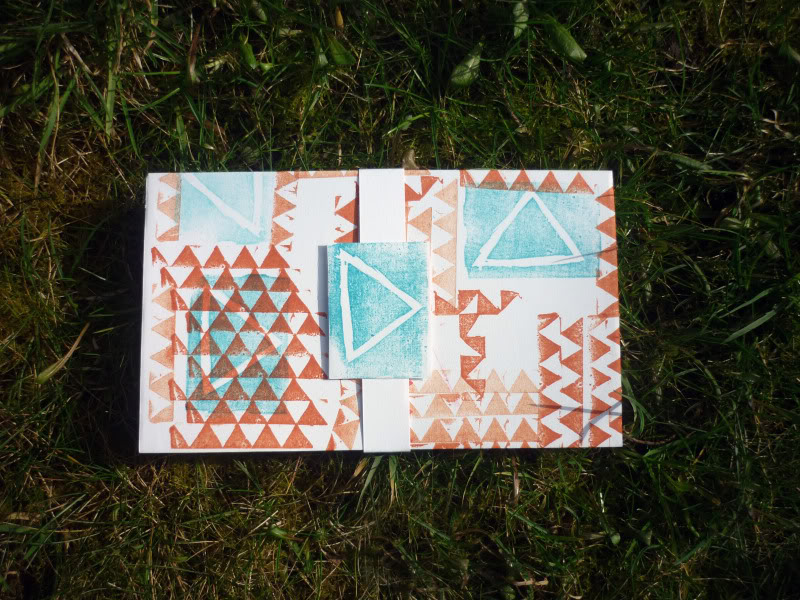 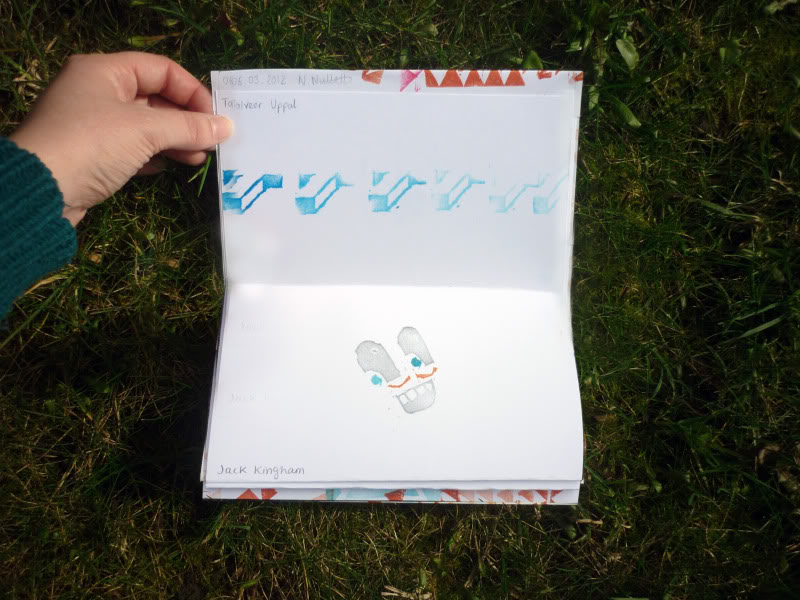 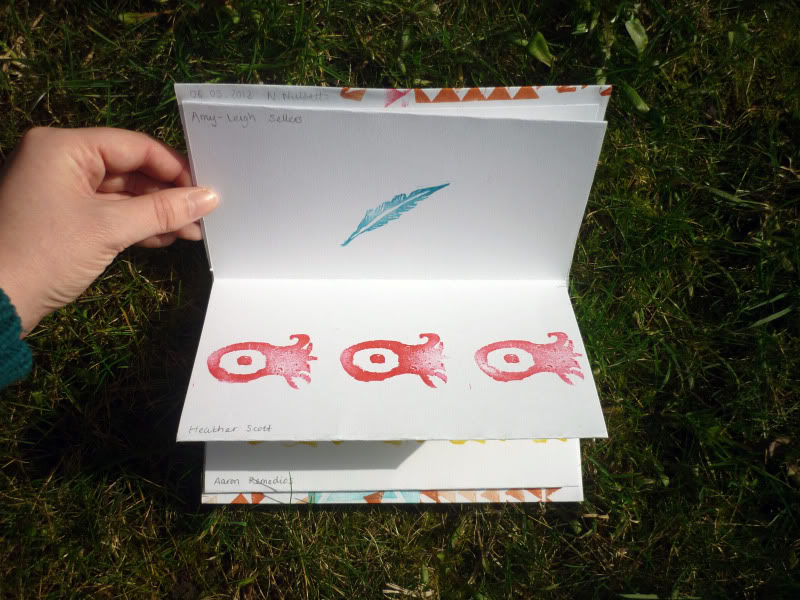 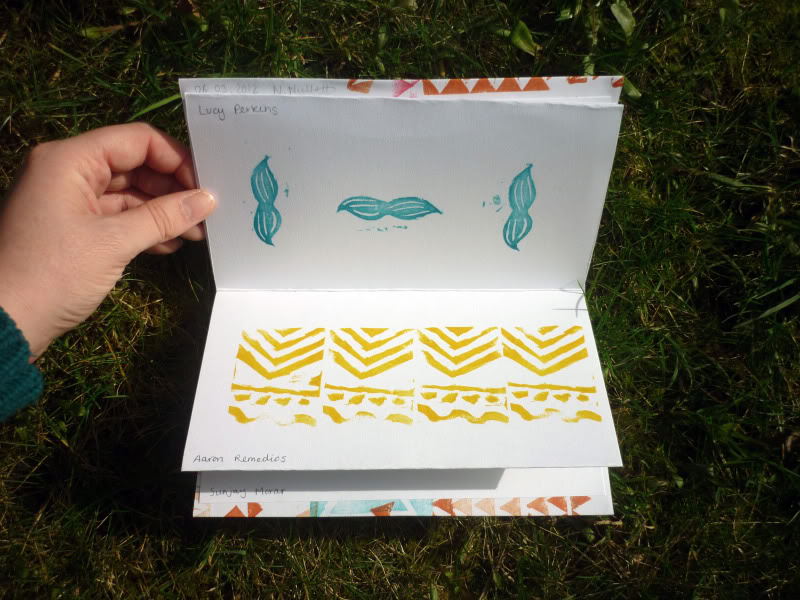 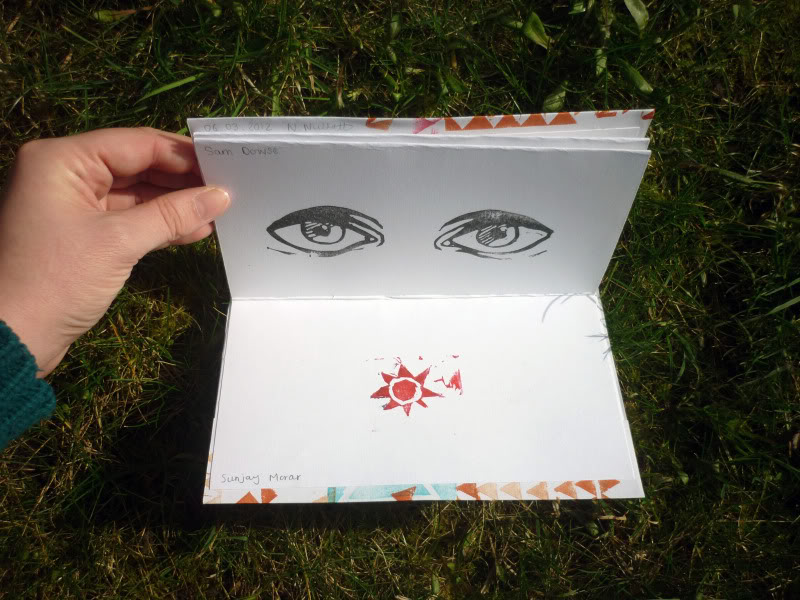 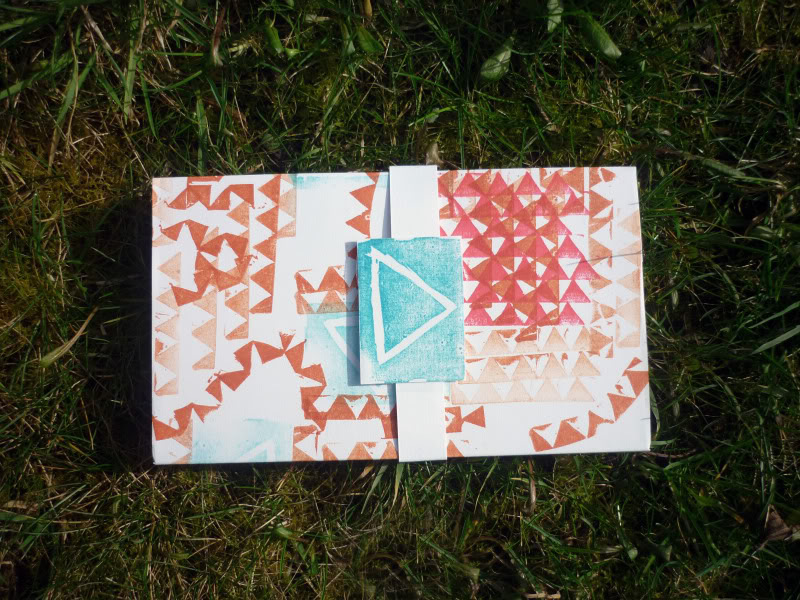 I love my little book. A lovely reminder of the day and something that will hopefully be worth a lot in a few years to come when we’re all famous Graphic Designers! 😉 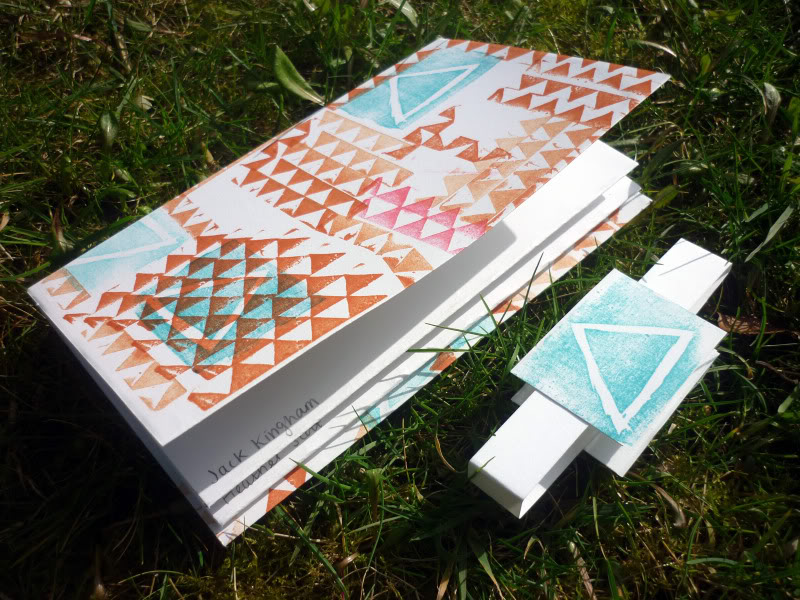 Thanks for sharing your skill with us Stephen! You can see more of Stephen’s work on his blog. He taught 4 groups over 2 days, so for more work from the other groups have a look at Emma and Dave’s blogs!
Get your rubbers out and get stamping away!

Thinking outside of the box with Dominic Wilcox