At the start of the week, Barrie kindly arranged for one of his past-students Dominic Wilcox to come and talk to us about his work. At the moment we are currently working an a project which requires us to produce an ambient outcome so we were expecting Dominic to show us some unusual things – I don’t think we realised just how unusual… 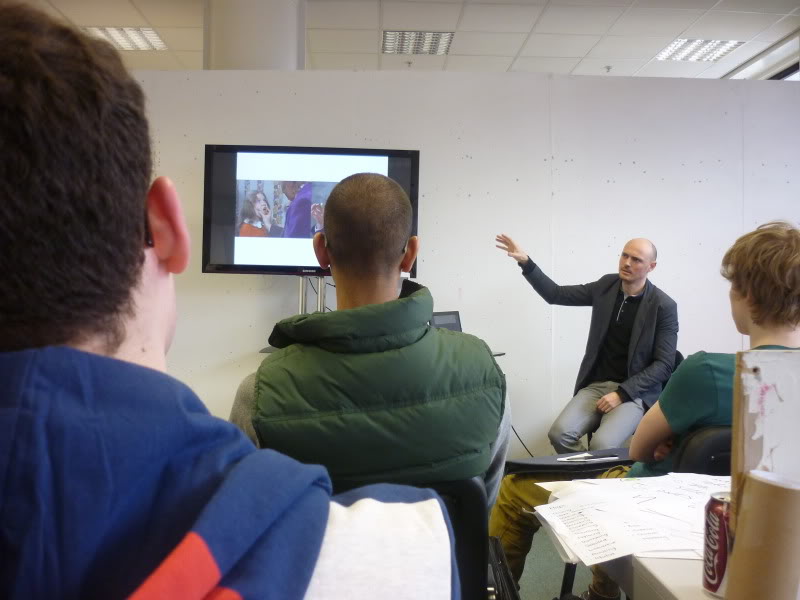 I’m not sure what I would class Dominic’s work as… Graphic Design is a broad subject but I’m not sure it is the right ‘pigeon hole’ for him as I feel like it leans towards being quite Fine Art-y too. One thing is for sure – Dominic is a pure ideas man. Most of them are a bit crazy, but who said that was a bad thing?! 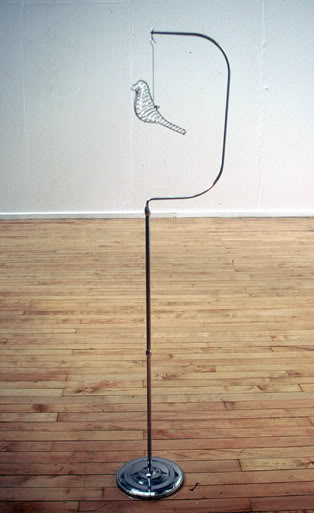 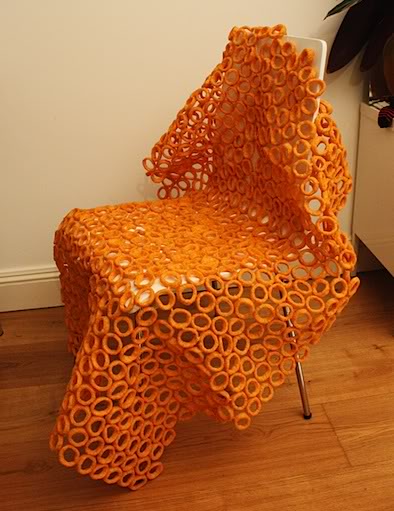 A bird cage with just enough space for a bird and a material made from onion rings and glue! 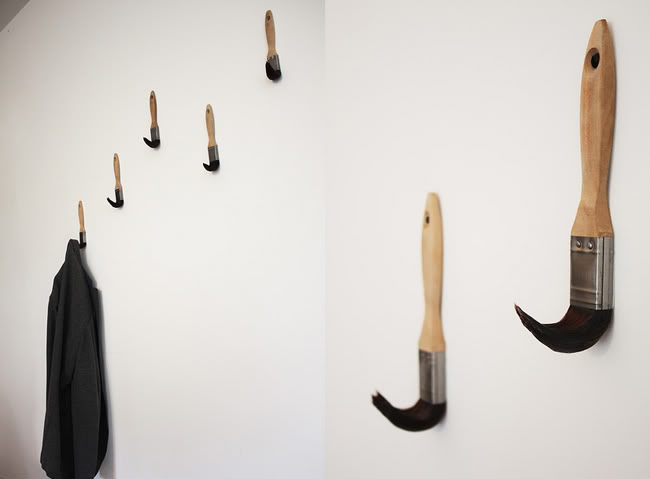 Coat hooks made from paint brushes…. 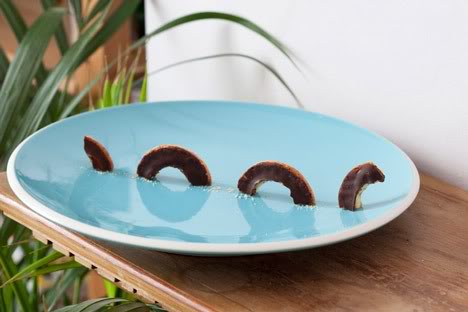 … and the Loch Ness monster made from Jaffa cakes!

The possibilities are endless. Dominic explained that you have to keep your mind open and that a part of his brain is always looking for things to pick up on, like  3rd eye!  He also said his ideas try to make the most of everyday normal things, which I think is why Dominic’s work is so fun, brilliant and simple. Everyone can relate to them; he has just put his own little spin on them. 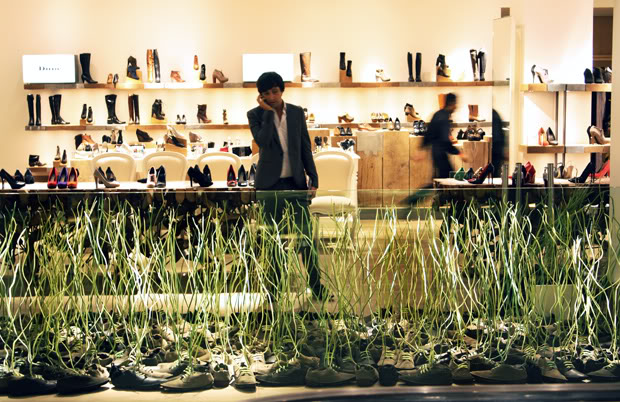 Above is his shoe field, where the green shoelaces act as blades of grass…. 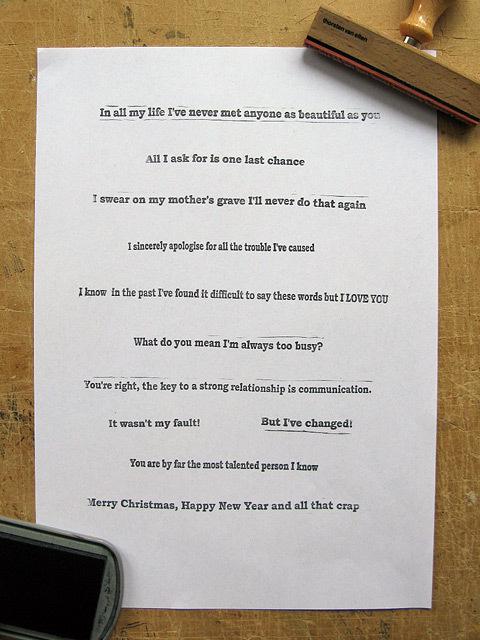 … and here’s a series of rubber stamps Dominic produced around the idea of phrases you shouldn’t overuse because they will lose their meaning…. totally defeating the object by making them available to be used frequently.

I really loved his pop-up creation: 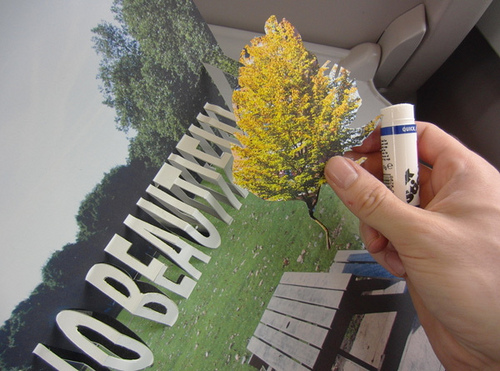 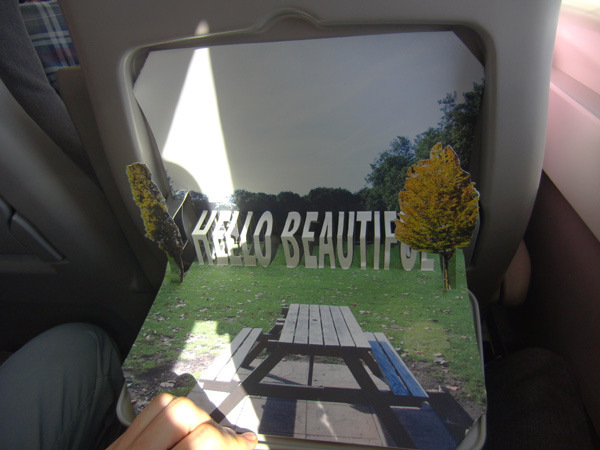 I love how he made it on his train journey and left it for someone else to discover! I wish more train trays were decorated like this – send Dominic on more trains, that’s what I say!

A few of these projects were produced as part of his 30 day speed creating challenge which he set himself to generate creativity. Other outcomes include a smoothie made in a football, a cherub bath fountain and a shelf made from pencils. You can read about these and more on Dominic’s blog – Variations on normal. I think my favourite has to be this one – just hilarious!!

Dominic explained that most of his commissions come from people seeing his work on his blog e.g. Nike. The internet is wonderful like that; things can be discovered and shared across the world, spreading from blog to blog! He said that only one of the bigger blogs needs to pick up on your work and then the chain begins. You know me, I love blogging and I have had a small taste of success through being spotted on the internet. Hopefully my blogging 15mins of fame will come soon! (Until then I will continue to waffle, don’t worry.)

Thanks to Barrie and Dominic. I really enjoyed Dominic’s talk; it was something a bit different and I think that will really help me to think outside of the box for how I want to create my ambient piece.