As I mentioned Saturday, I’m a bit behind on the posts at the moment. Last week was action packed, but today is the first day of a self directed study week so I’m in the middle of making a to-do list – it’s pretty long!

Last Tuesday Ben Willers, an ex-Lincoln student visited to talk data visualisation. I visited his MA show back in September so was familiar with his work but as always, it’s great to hear more about the work from the designer themselves! 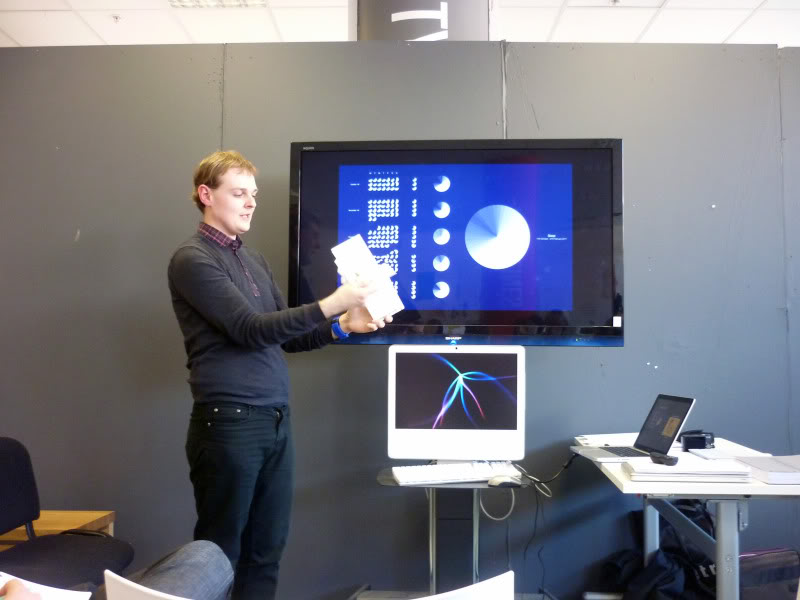 Ben gave us a background about himself and his time on the MA course, taking us through a series of data visualisations that he produced in that time. Although some people might not recognise graphs as amazing pieces of design, over the course of this project I have grown to appreciate the detailing used when producing data visualisations. For example, Ben’s use of opacity and layering in the visualisation of his sleep pattern data (on the screen, above) allows him to use data from single nights to create week charts and data from the week charts to produce an overall chart. I think this really makes the larger pie chart effective – you can see the solid section and the faded sections clearly. Ben talked us through a circular piece in which he mapped his life. This graph incorporated a lot of data, from his geographical location and education to his mood and hours spent working at Tesco. In this graph Ben had mapped a lot of data, but it was very simple and clear which made it very easy to cross-reference and compare data e.g. how many hours he spent working at Tesco with his mood. Ben also showed us some commissioned and competition work he had produced and told us about the feedback he had received from someone saying he had done his graph wrong. I don’t really have a head for numbers but think I understood it!

Thanks to Ben for returning to Lincoln to talk to us! If you haven’t already, check out his website for more data visualisation!

Prior to the session, I had drawn quite a few graphs as practice: 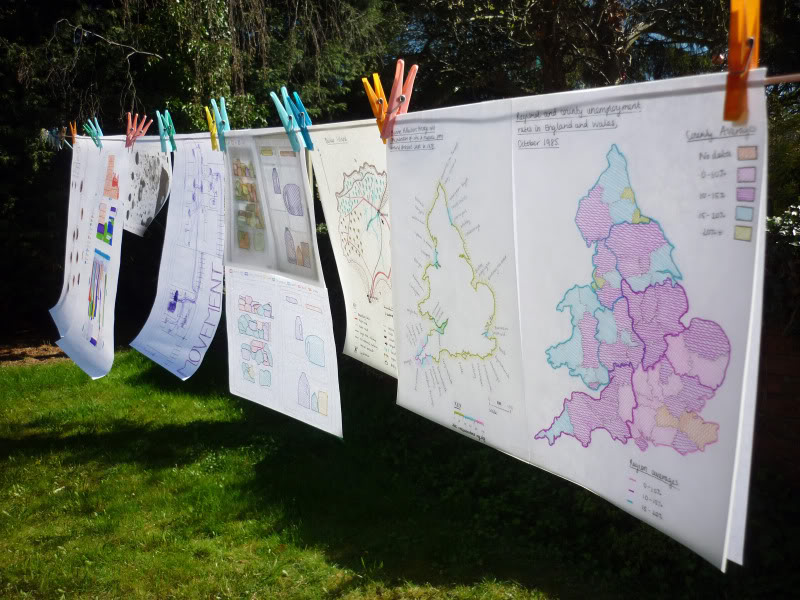 For the session, Chris asked us to produce 3 types of graphs: quantitative, qualitative and ordinal. If I’m honest, I was a bit confused by which was which to begin with but after learning one it was a matter of using common sense and elimination to determine the other two. 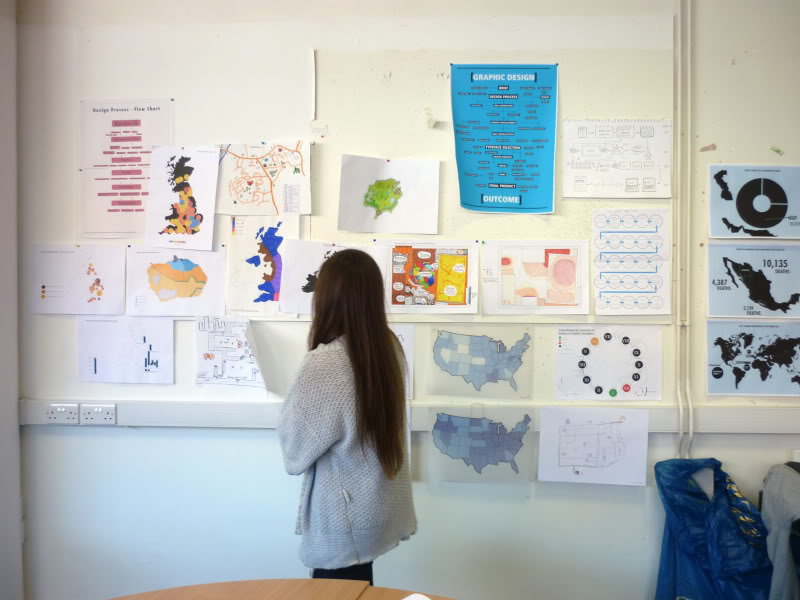 Beth looking at work by Lucy, Stuart, Chris and Tom 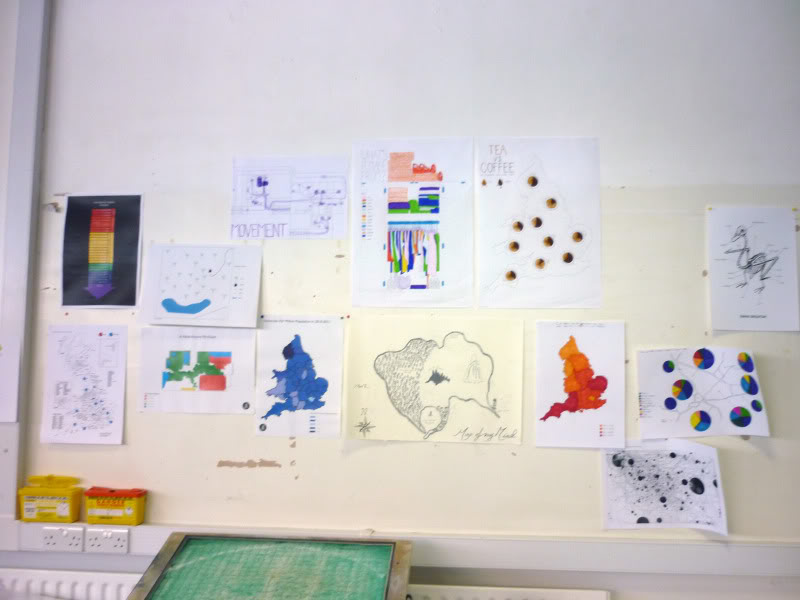 Work by Sunjay, Jack, Sam and myself.

You can see more work here on Discourse, the course blog!

My visualisations this week were themed on the different materials inside my wardrobe, where I spent my time in my house and the tea vs coffee debate in England and Wales. 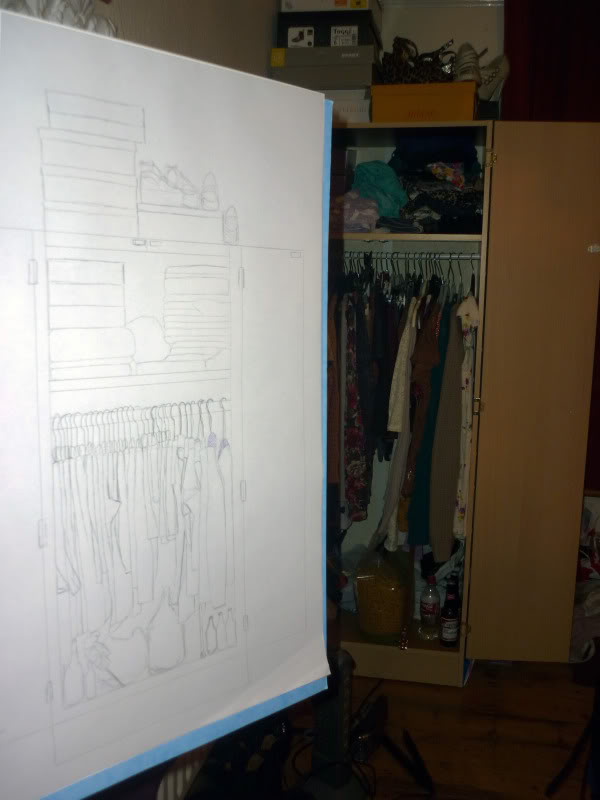 For the qualitative visualisation, I chose to map the contents of my wardrobe to do something a bit different to what I thought everyone else would do (maps of towns, countries etc): 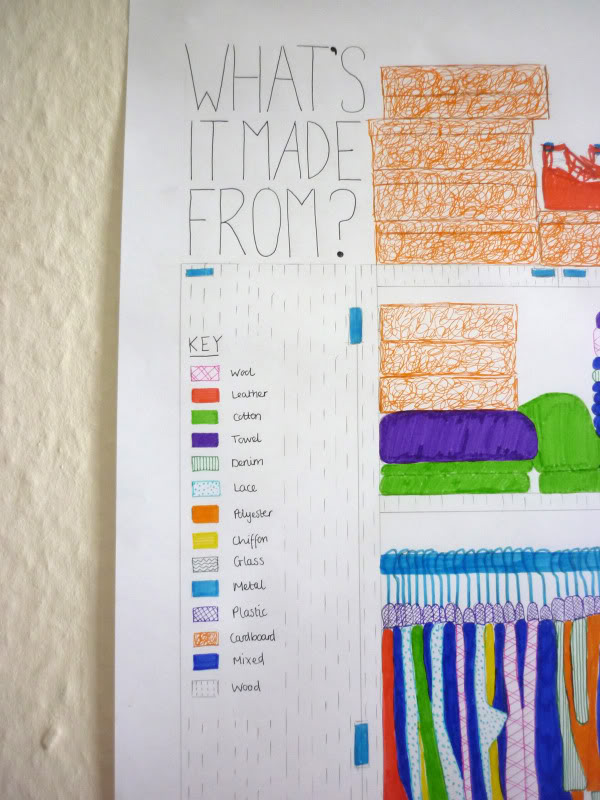 I used materials as my categories and shaded the different items in different colours and patterns to help show what my wardrobe is made from.

I had also done a similar map for the contents of my fridge, but thought that my wardrobe map was more interesting… For the ordinal graph I decided to map my movement in my house for one day: I drew a continuous line to symbolise my path and the more time that I spent in the place, the denser the colour. So as you can see, I spent most of my day here: In my room, doing work at my desk of course!

The last graph/map I produced was a quantitative map about rivalry between tea and coffee drinkers in England and Wales: 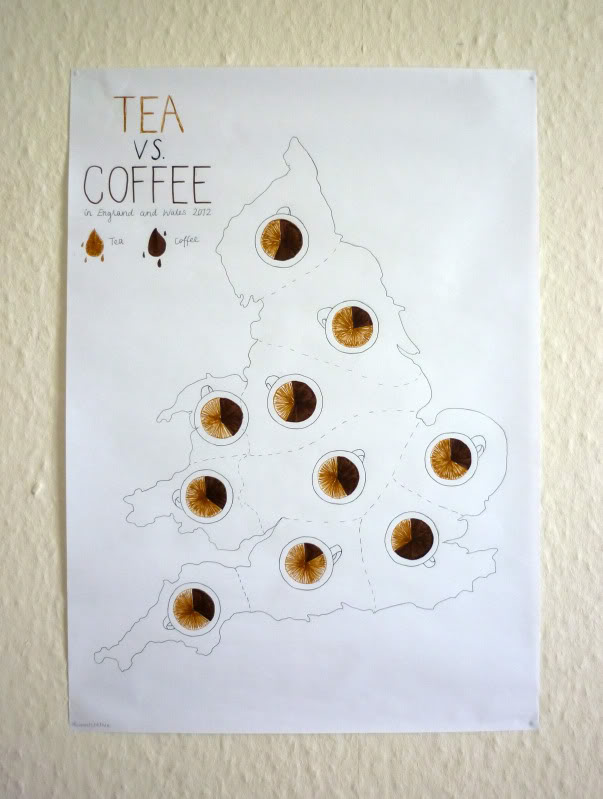 Chris put me on the spot a bit in class when he asked me where I got my data from, but I was honest and said I’d made it up – it’s more of a stereotypical view than solid data. Again, this was a hand drawn map but Chris and Ben said they thought it worked for the subject and liked my teacup/mug details: I was a bit worried it looked too plain to begin with, but I’m glad I didn’t over complicate it.

I know I keep saying it but I just want to produce something a bit different to the vectorised work the majority are producing(not saying there is anything wrong with it!). I like handmade and I think that it helps to add interest and make people look, rather than think ‘oh it was just made on the computer’. I got to carry on my petition against vector visualisation on Wednesday at the Inter-Year design challenge and our handmade approach sparked a lot of interest, with a bit of a crowd to see what we was up to!

Now it’s a week of self directed study, then 2 weeks of easter, another week of self directed study and one last pin up week before finally the deadline and end of 2nd year! Eeeek – very scary! I’ve got 4 weeks to produce 2 A1 graphs for this module, 1 with my own data and 1 with data provided for us (excel spreadsheets about energy). I’m going to try and carry on with my handmade style so we’ll see what happens!