So I’m posting this A LOT later than I had planned – the event was like 3 weeks ago! So sorry, but better late than never, hey? It’s worth the wait anyway…

So on Friday 9th November, Jack & I ventured to London for a day of letterpress talks. The event was brought to my attention by my tutor, Barrie, and I’m so glad that it was – it was such a great day!

I’d not actually been into St Brides before as last time I tried to visit, it was closed for refurbishment (I think) so I was very excited to finally be going inside (like the geek that I am)! The day began with Thomas Gravemaker, of who I didn’t really hear that much from as we were sat quite far back (and then a tall girl sat infront of me too so I couldn’t see – c’est la vie!) but what I did hear and see looked great… 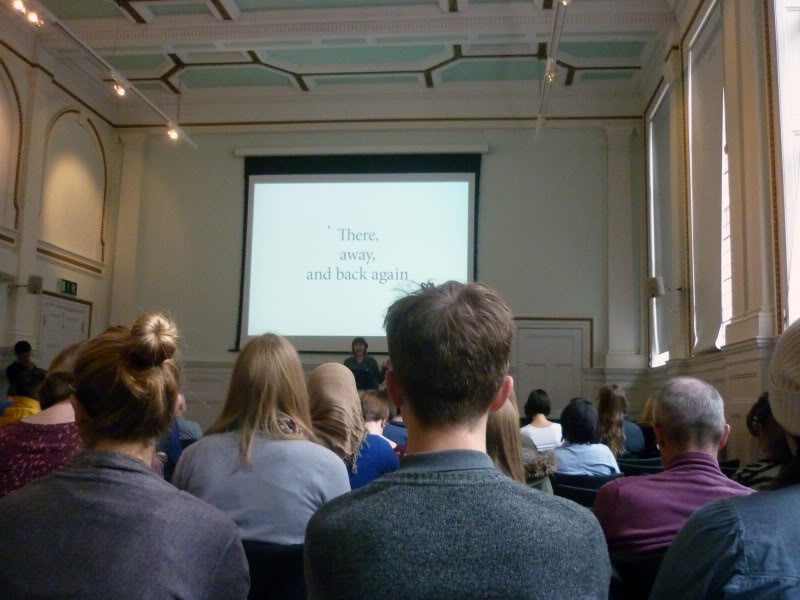 … a young Thomas in the print room: He told some great stories about how he met John Ryder, the author of his printing Bible, after selling all of his type to move to Rome. Thomas said they developed a friendship and used to go to Pizza Express together – got to love Pizza Express! It would appear that Pizza Express holds opportunities as well as pizzas, as Thomas typeset a poem by a waiter that served him: Thomas also shared with us a story about the Haas type which he was given from the last remaining Haas shop which was sadly closing: Thomas gladly accepted all of the type from Haas and in return, keeps their wine cellar full – A sad, but lovely anecdote I thought!

The next speaker was Ian Gabb, print technician at the Royal College of Art. He spoke about his battle with computers – ‘they’re not user friendly’ and how students have become reliant on computers by simply just printing their work out without checking line breaks etc. He showed some lovely typographic work which was influenced by his time in Italy: There was a great story about how Federico’s work was used by David Carson as part of a cover for Wallpaper magazine (pretty awesome!) and even though David Carson ripped his work up to create the cover, Federico was still really excited to meet him: … and the cover looked great! Catherine played a video of Federico working in his print studio to finish: You can view more of Federico’s work here, which includes some of the stationery that he does to make a living and fund his more political work.

The next talk was about Desmond Jeffrey, presented by Charlotte from Spike Island and Jono from City Edition. I wasn’t familiar with Desmond’s work, but Jono’s passion for the work was apparent, which he explained stemmed from seeing Desmond talk in 2009 and then going on to write his dissertation on the work. Desmond’s work is typographically simple and so effective: Charlotte & Jono explained that a lot of Desmond’s work was politically influenced and that if he didn’t agree with the values of a client, he wouldn’t work with them. He saw printing as a political act – putting his opinions down on paper.

Desmond saw letterpress to be vital as a means of expression, as so much thought and time goes into typesetting the words and message. Next up, all the way from Barcelona, a trio of designers from studio L’automatica: They first showed the newspaper which they designed for use at the Occupy movement in May 2011 – Ara Es Hora = Now is the time. 5,000 were given out and people help up the papers, using the pages as banners to show their feelings: They then spoke about Faran, the owner of a dying print shop in their local area. Faran had been working as a printer with his Dad since he was 14 but sadly it had got to the point where he couldn’t pay the bills. He approached L’Automatica to say that he was shutting his print shop down and ask them if they would like to buy his equipment, or it would all be sold as scrap! It’s terrible to think that all that printing history could be melted down, but L’automatica had a plan…! A group of 9 people made the decision to save the print shop and keep Faran working. They have spent a year being Faran’s apprentices; learning about all of the printing machines and processes. They use the print shop to collaborate with artists and also run workshops: What an amazing story – I was really touched. You can see more from L’automatica here.

And then it was lunchtime! There was a bit of a rush to snap up goody bag items… … which I’m going to do a separate post about because I picked up some really lovely things! Justin from Fenner Paper was lovely to speak to – I even had a bit of a blog geek out with him ha You should follow his blog if you don’t already! Jack & I went for lunch at Leon: I love it in there – great food and branding! There was just enough time to have a quick look at the posters which were being auctioned off at the end of the day… … before the talks started again. You’ll just have to wait for my next post to see what happened next!

Letterpress: Something to say - Part 2