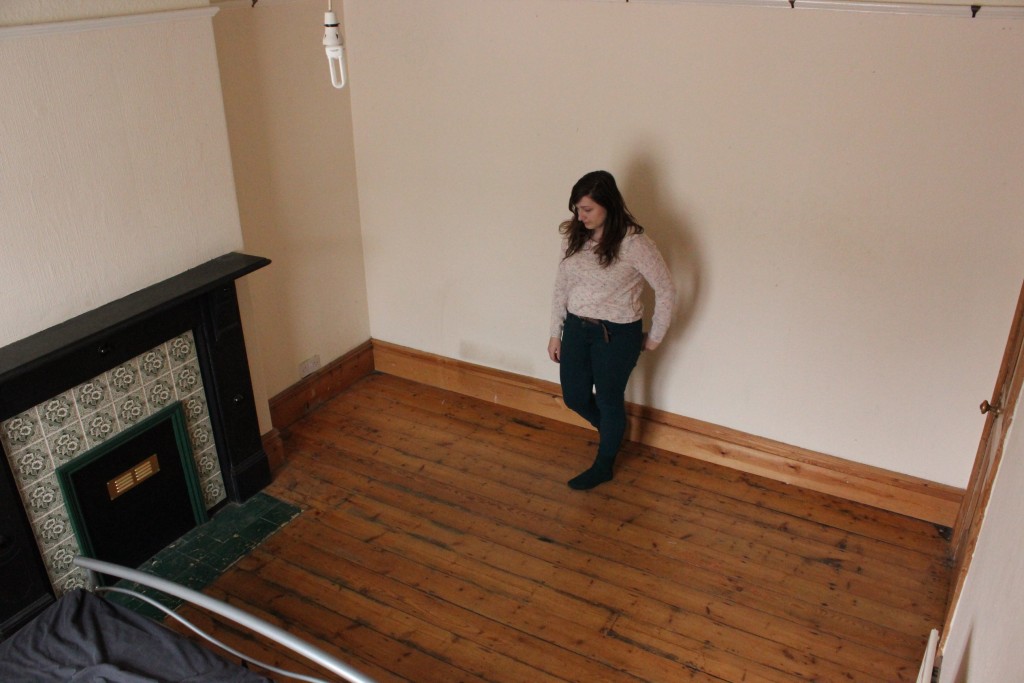 You may remember a little while back (a month today actually!) I was doing some weird things with my room – emptying it, inviting people over, doing the conga etc. It was all good fun, but what was it actually for?

As the penultimate brief of our degree ( cry), Philippa gave us an open brief with a starting point. Franz Kafka’s ‘Metamorphosis’, which is the story of a hard working travelling salesman who turns into a bug and is then abandoned by his family (in short).

After reading the story, I found it to be all quite depressing really – he worked so hard to provide for his family and then he turns into a bug, which is a bit dramatic I guess ha, but they become ashamed of him and want him dead! Oh the possibilities of an open brief… too many! I was pretty stuck and didn’t have a clue where to go with it. So I came up with some crazy idea to do an experiment – I was going to try and live like Gregor, without my stuff.

In Metamorphosis, Grete and Gregor’s mother start to remove furniture from Gregor’s room with the intention of trying to make life easier for him as a bug. Even though the things get in Gregor’s way, he is attached to them as they are the last link he has to his human life.

I undertook a Metamorphosis experiment and asked my housemates to remove all of my belongings(except my bed) from my room. It was a big risk really – what was I going to find out/produce as my final outcome? I couldn’t really tell what was going to happen until I had lived the experiment and then it didn’t give me long to rationalise my idea and make it into something.

Philippa didn’t tell me until my last crit, but she said it could have been a disaster. And what I’m taking from that is that it COULD have been, but luckily wasn’t a disaster!

I lived without my stuff for 16 days, recording the process photographically and actually found that I didn’t need or miss all of the clutter. Instead, I spent more time with my friends, creating memories. So it was decision time – what was I going to produce?

This is my first, rough version of a series of viral ads for National Declutter Week 2013. The campaign is based around my timelapse videos and I have a few different variations and lengths which would be shown in between videos on Youtube.

The concept is ‘Stuff to live’ or ‘Space to live’. If you get rid of all your clutter, you will have more time and space to do fun things with your friends – see here!

I still have a fair amount to do, but am looking forward to finishing the campaign this Easter. Let me know what you think and don’t forget that National Declutter week is 6th – 14th April this year, so get rid of the stuff and make space for life!