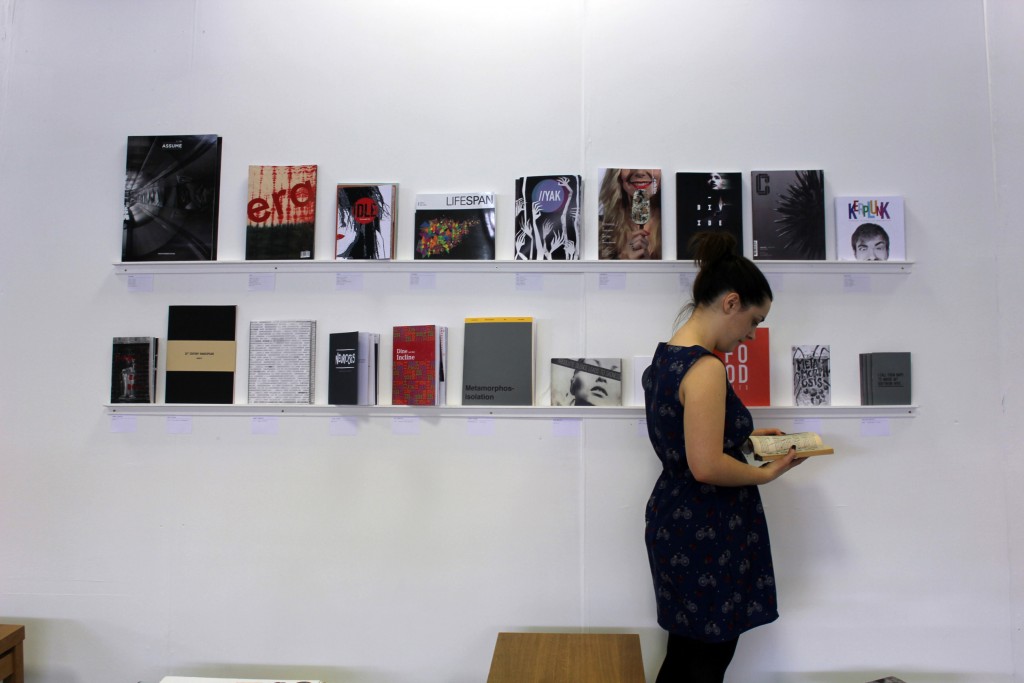 So it’s that exciting time of the year where all of the degree shows start popping up. Unfortunately for anyone who follows my blog, the Lincoln Graphic Design degree show isn’t going to be a total surprise as I’ve blogged about it quite a bit. In both first and second year I ‘reviewed’ the shows  – sharing my favourite pieces of the brilliant work the 3rd year students had worked so hard on. Now that it’s my own show, I found it really hard and quite awkward trying to ‘review’ Show Thirteen which is why this post comes quite late. I’ve been so involved in the making of the show and know the people so well – I don’t want to upset anyone by not including them etc. However, I decided to bite the bullet and share my favourite work from Show Thirteen – it wasn’t easy picking from 76 students! I love these fun photos of us in Thomas Parker House’s window – they show our fun side. Work hard, play hard, right? Hand bound, gold foiled and edible paper – students have considered every detail when producing these publications. The first panel to catch my eye when I walk in the room is Harry Winfield‘s  Metamorphosis response. He produced a fabric swatch book with sewn typography – which he scanned in and used as his panel. Next to Harry is Leanne Kitchen, whose Caslon revival project was really interesting and had every detail covered: Detail is something that Jack Slater‘s not afraid of either, which shows in his beautiful illustrative style. I always get green eyes when I see Jack’s work, specially his Pen Pals campaign (which Emma is modelling in the portfolio) and his ISTD response to the Food for thought brief: His panel shows the food illustrations from his recipe book which is beautiful: Lucy Perkins’ final project looked at body language and behaviour which I found really interesting. Lucy has a great editorial style which translated well in the spreads of her publications: Lloyd Shand’s winning ISTD metal plaques are beautiful, as is his Metamorphosis project for which he produced a film of a stack of paper being blown apart – a must see! (I’ll find a link) Obviously I’m not going to feature myself, but just wanted to highlight that my panel glowed. There’s no electrics involved, just one of Tullett’s top tips to make the terrible swear words glow a slimey green: I think it looks pretty cool anyway. To see my panel, check here.
Opposite my panel is Jack Kingham’s final project about the Falklands war, for which he produced a publication detailing the events: It’s always a good sign when  you walk up to a board where all of the cards have been taken – Ryan Vardy’s work has proved popular and it’s clear why. I love his Ted Baker project – quirky and cool with a chalkboard typography focus. … whilst Emma had a spin of David Morris‘ metamorphosis project. (Note: another empty business card holder!) Great digital style work from Talveer Uppal. I loved his Ted Baker campaign and also his collaboration with Harry Winfield for the Pen Pals brief. Their animation uses brilliant music (La Samba!) that will be in your head for days – infectious. Here, on the left, we have something a little different to the other panels from Emma Dawson. It definitely stands out and communicates craft and a hands on approach. On the right is a series of Penguin book covers by Jenna Brightwell. The design is constructed from layering different fonts – I think it’s really effective and striking.. She also used my quote in her final project about people’s ideal worlds: ‘Everything would be triangular’ – tri-tastic of course! …and I thought that Mia Donockley’s Forestry Commission campaign was a great combination of imagery and sarcasm. So that was quite short, but they are my very edited down, highlights of Show Thirteen. Obviously there is still so much more to see, so if you haven’t already, make sure you visit before we close at 4PM this Friday (tomorrow!). Let me know what you think of Show Thirteen – what did you like or dislike? Get in touch!

I just don’t want it to end!