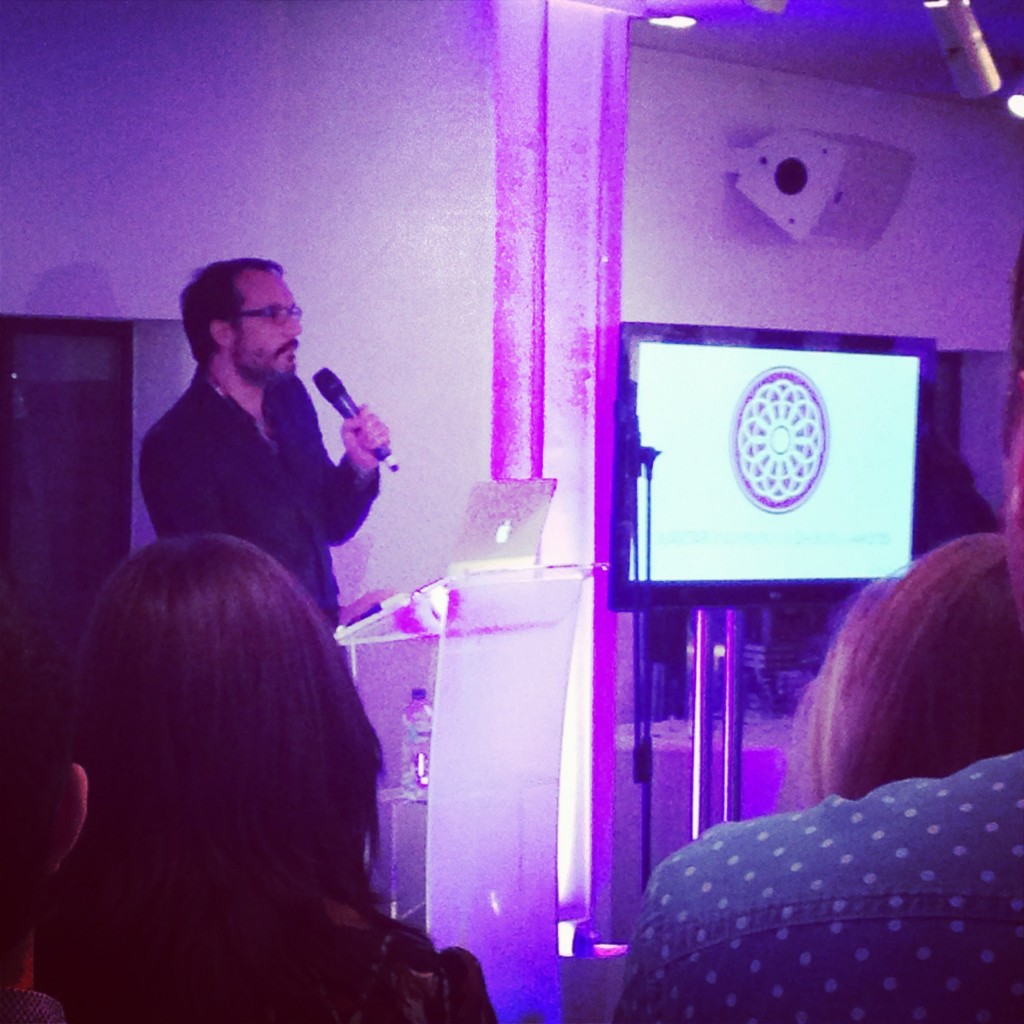 Wednesday evening I was lucky enough to attend the Information Is Beautiful Awards 2013. You may remember I posted about making The Longlist? Well that’s as far as I got (I’m still honoured!) but fellow Lincoln grad, Ben Willers, made it to The Shortlist and asked me if I would like to go to the awards as his +1 – what a lovely guy, hey? This was the first design awards ceremony that I’ve attended so I was really excited! 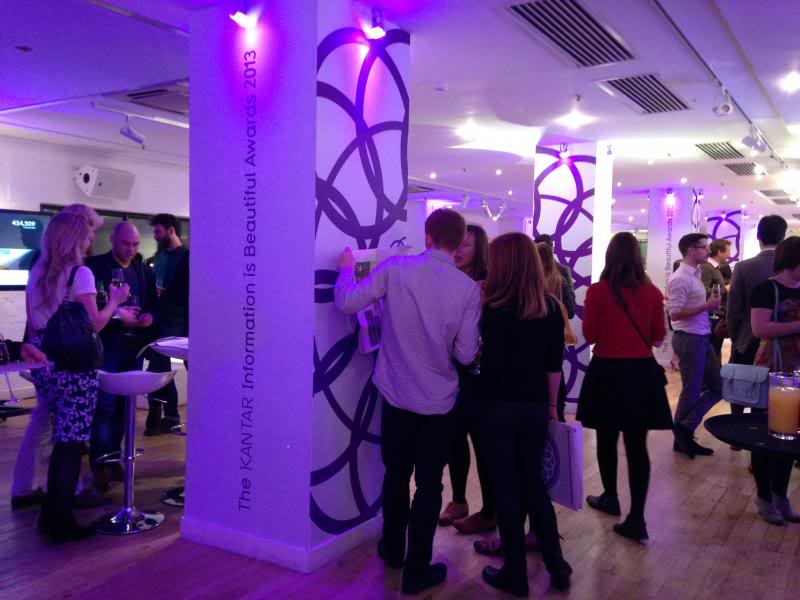 Held at the OXO wharf tower, it was quite a swanky event.

Ben met with Tommaso who was there representing Accurat, an Italian information design agency, and a few other guys. Ben had worked with Accurat and Visually on The Startup Universe which was shortlisted in the Interactive category. 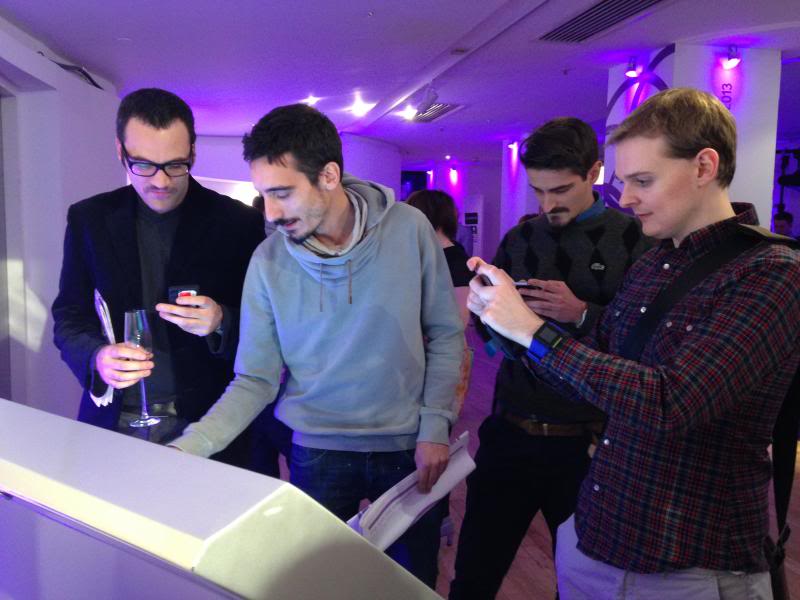 The boys wasted no time in exploring The Startup Universe on one of the big interactive screens, with Ben explaining how it worked and what different things meant: 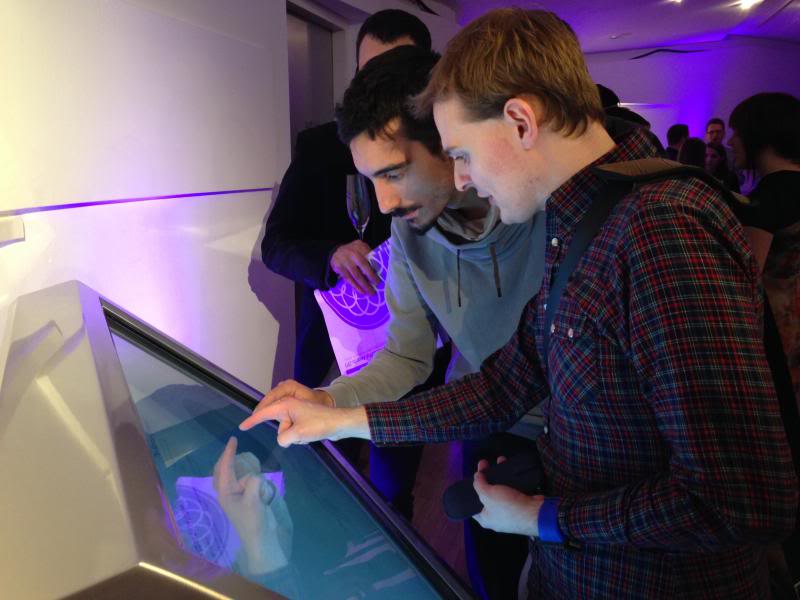 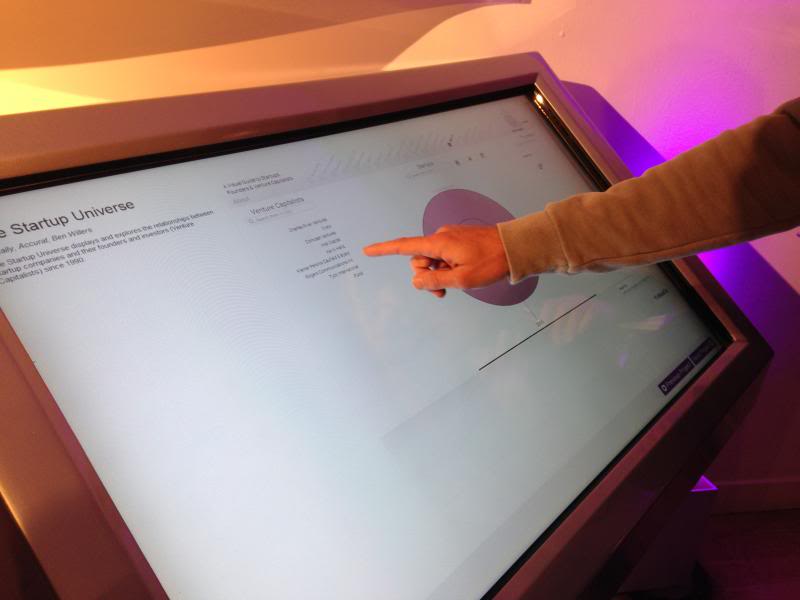 Eyes on the prize! The awards were on display for everyone to have a look at – would the Startup Universe be taking one of these home tonight? 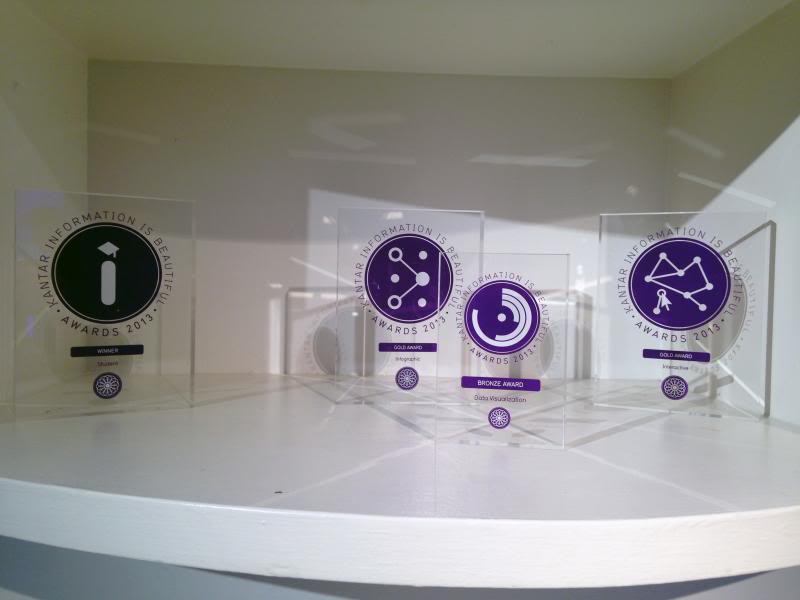 David McCandless, author of the Information Is Beautiful book, was our host for the evening: 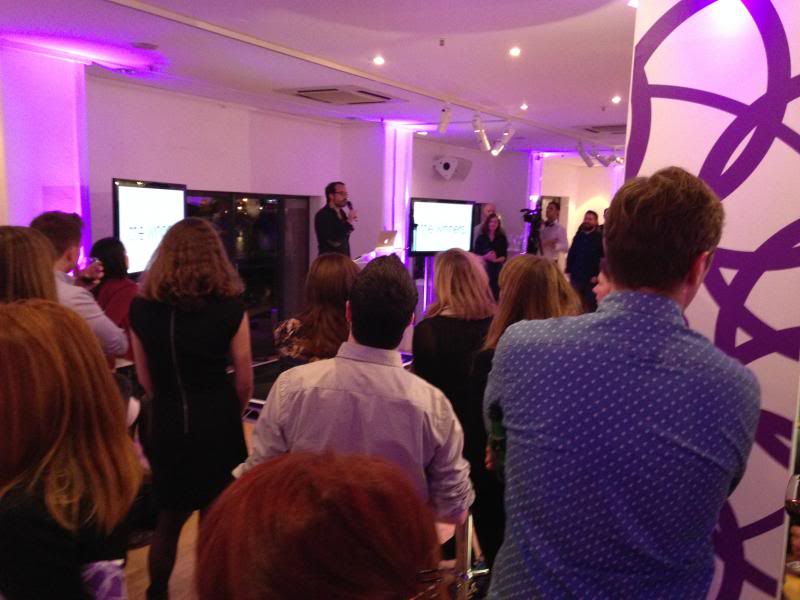 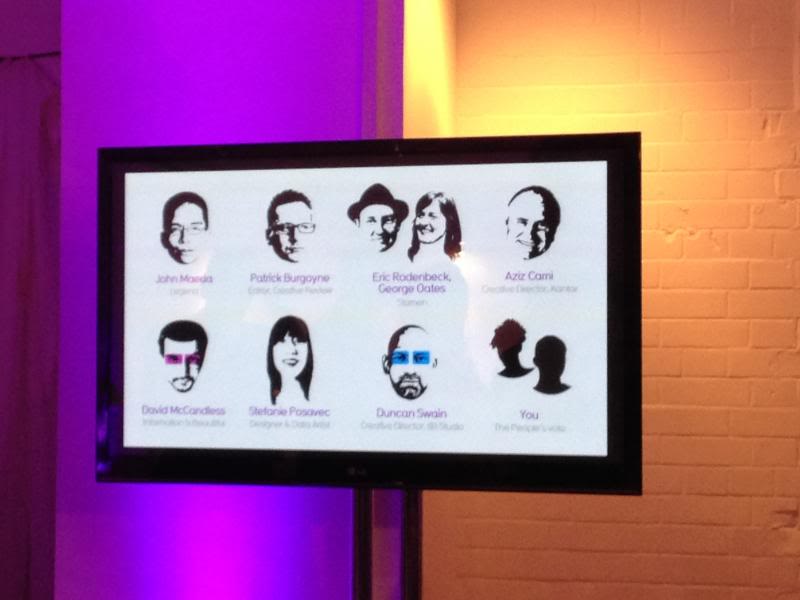 He introduced the judges, two which I had already met: Duncan and Stefanie. I met Duncan when I was in London for my inspir-cation last month. Earlier in the evening Ben had recognised Stefanie and headed over for a chat.

To warm up the crowd, David tested our data knowledge with a ‘Dataviz quiz’. Did you know that toast is the most popular breakfast food, followed be porridge? And that on the internet, Facebook and Youtube are more popular than sex (in terms of searches)? Well, now you do!

So after some laughs, it was onto the serious stuff – the awards! Unfortunately Ben’s work didn’t bag an award but Tomasso nipped up on stage twice to collect awards for Accurat: 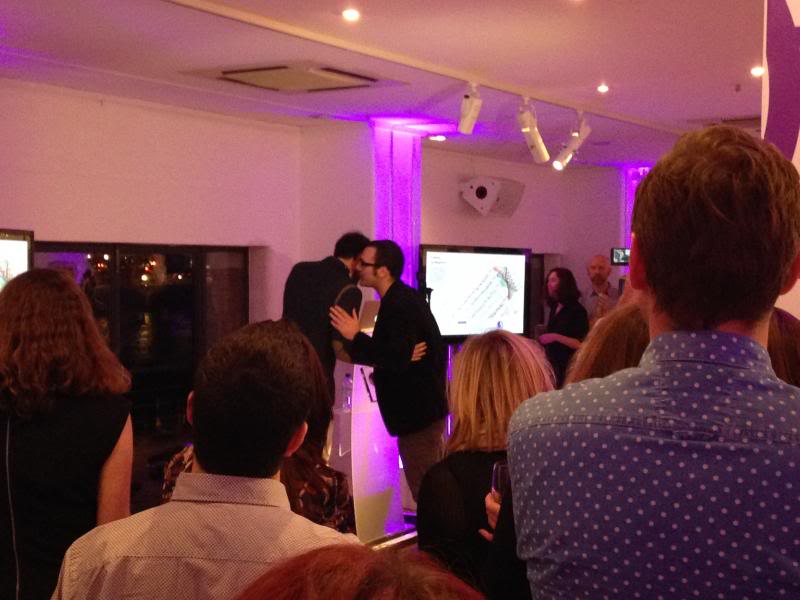 Congrats to all of the shortlisted work and the winners. I don’t know how the judges made the decision because the standard of work was so high – I don’t envy that job! Oh and another thing: I actually learnt the difference between an info graphic and a data visualisation – it felt great to have clarity finally!

So with the awards handed to their new owners, it was time to celebrate: 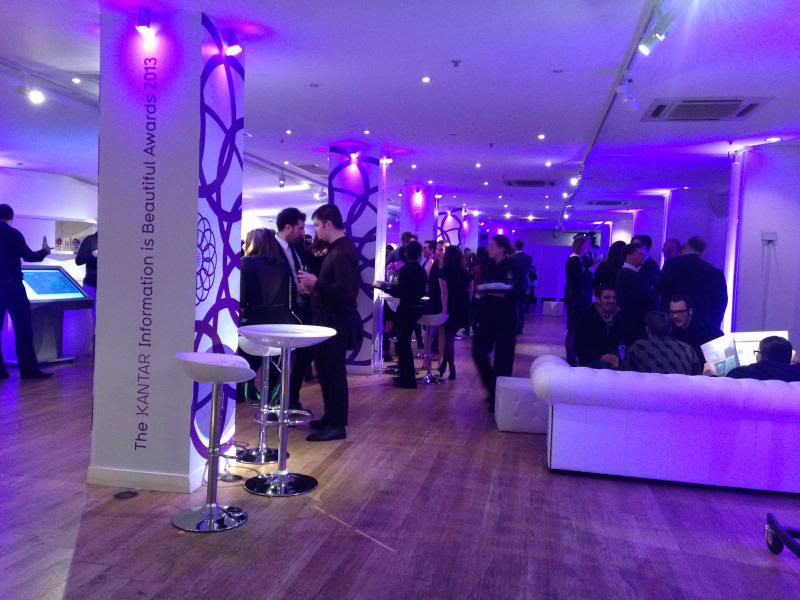 Posh nosh was on offer… 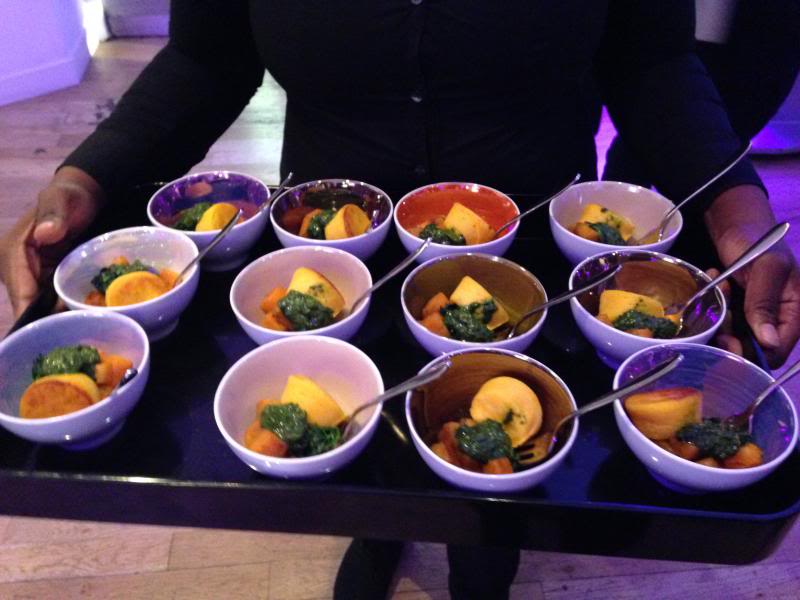 …however, I wasn’t too sure about eating fish and chips or roast beef, carrots and mash at an evening event so I politely declined. At one point we got excited because we thought we had found something sweet but Ben found out the hard way when it turned out to be a lump of Dairylea!

Food aside, it was time to be social and meet new people! I found that everyone was stood in their own conversation groups and you would have to ‘break in’ to the circle to get talking but everyone was really lovely and passionate about the future of data viz!

I even managed to bag myself a copy of David’s book – this is exciting for me because my Uni Library only had one copy of it and I wasn’t able to ever get my hands on it! I’m really grateful to Ben for inviting me as his plus one – so lovely of him! I had a great time and hopefully this won’t be the last awards that I get to go to 🙂

Hello my name is Paul Smith @ the Design Museum