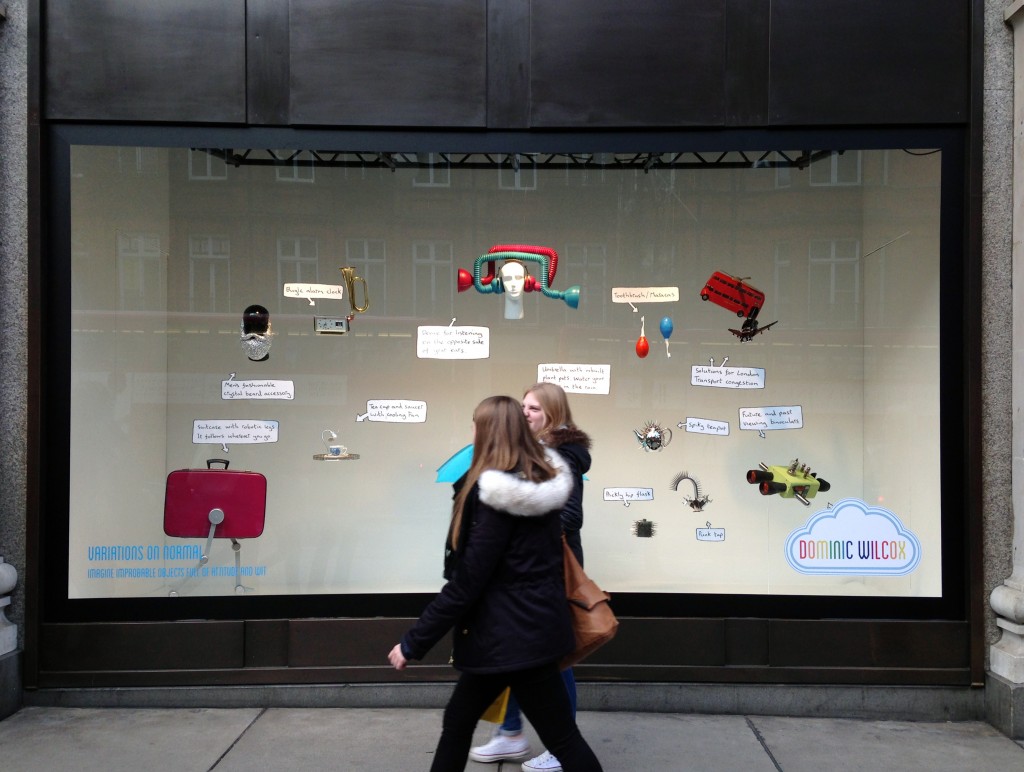 It’s no secret that Selfridges has some of the best and most photographed window displays in the world. As a creative I am always inspired by them, but when I read about Selfridges Festival of Imagination I was SO excited!

‘Imagination’ is mostly associated with being a child, having crazy ideas and being a dreamer, however for some grown ups it’s very important to continue exercising their imagination skills: creatives! Without imagination, the world would be a very boring place, but thankfully there are a lot of talented creative minds that will keep everyone looking, thinking and enjoying. A couple of my favourite windows: 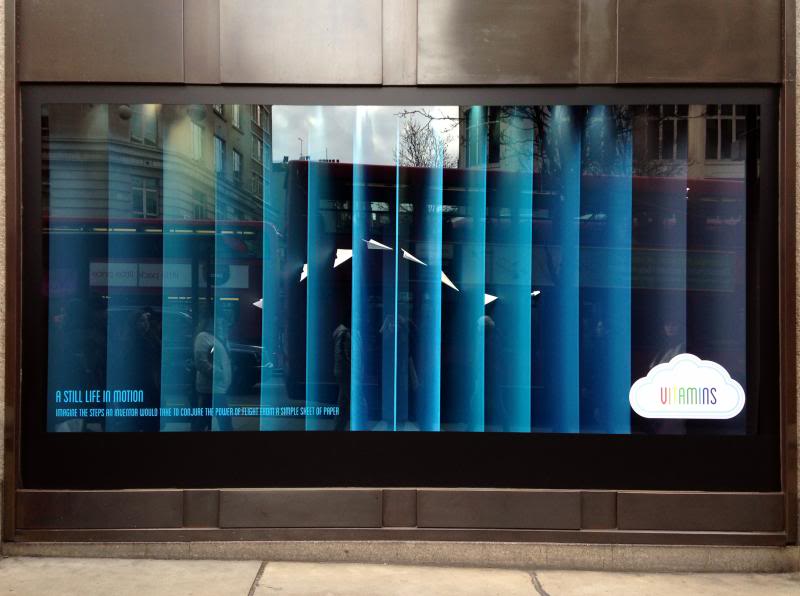 A still life in motion by Vitamins 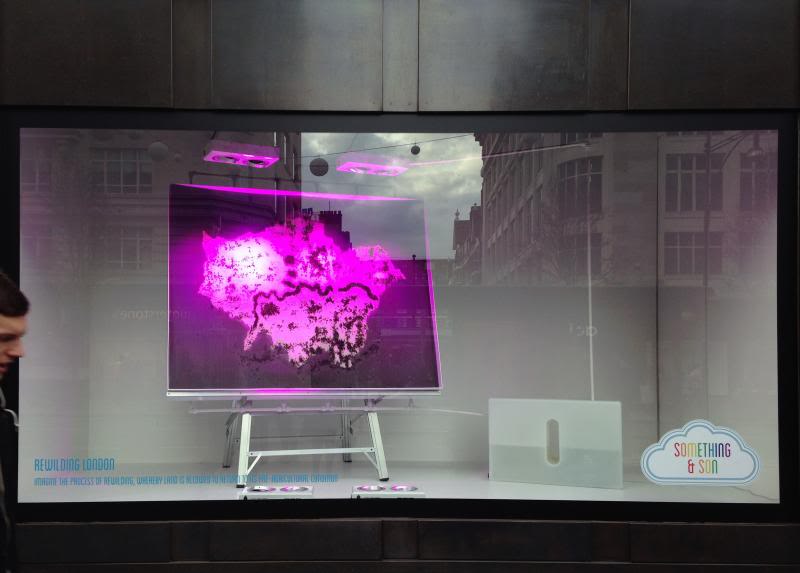 Rewilding London by Something & Son 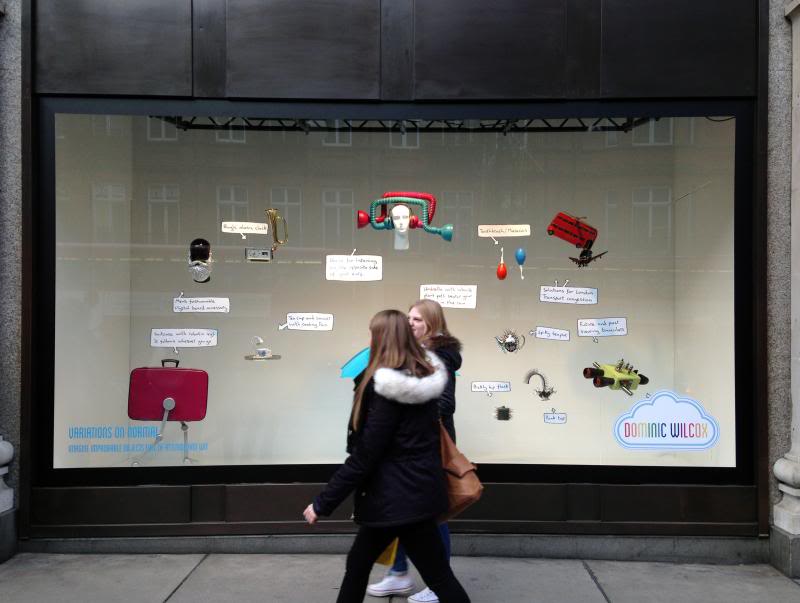 Variations on normal by Dominic Wilcox.

During my 2nd year of University Dominic visited to talk to us about ideas, thinking outside of the box and his work. Amazed by his crazy thinking and a fan of his work ever since, I was keen to get a closer look of Dominic’s window after seeing his blog posts: 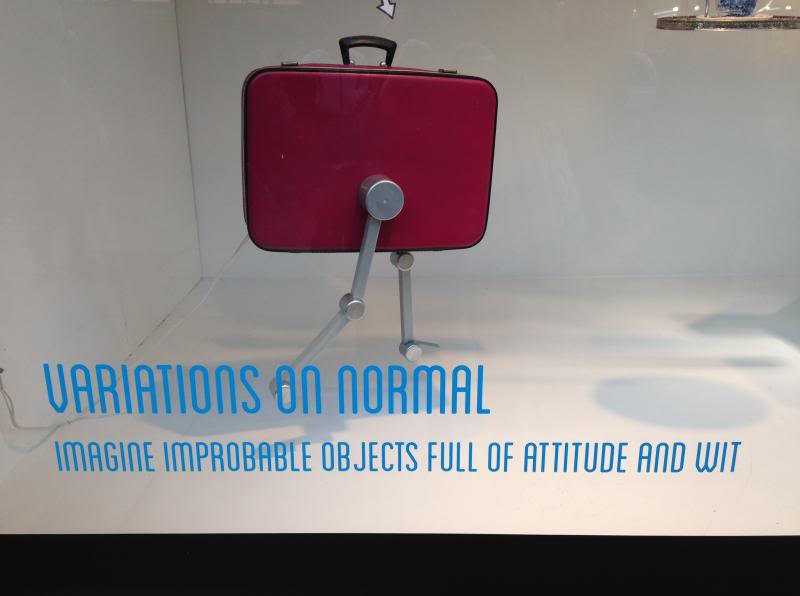 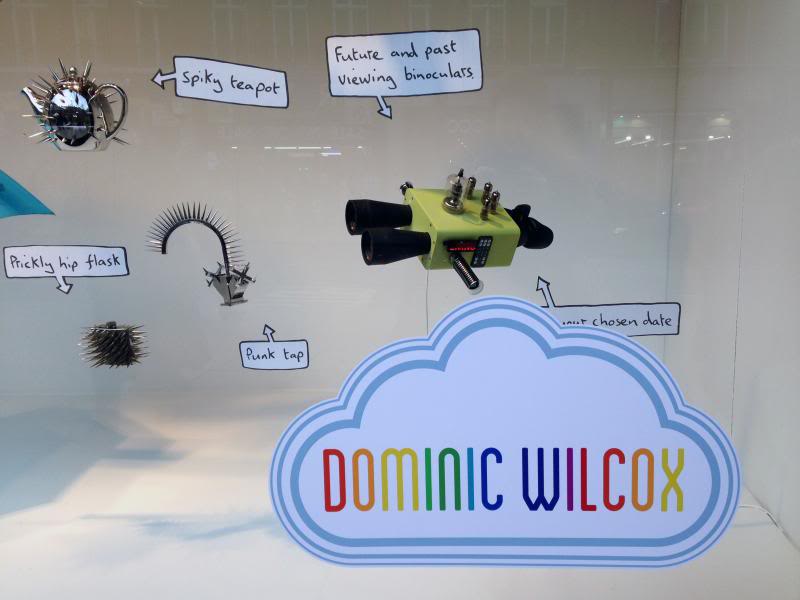 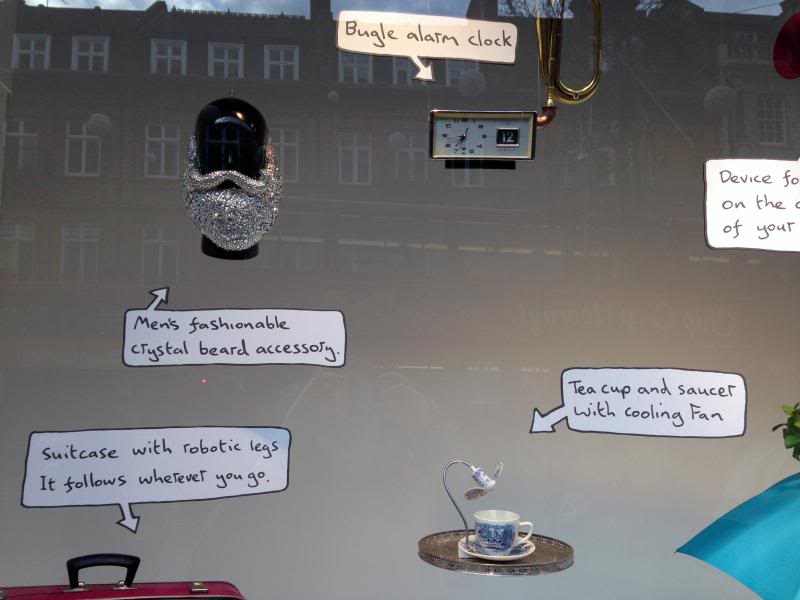 … blingy beard accessories, a suitcase with legs so you don’t have to carry it, a tea cup and saucer with matching fan so that your brew is never too hot… 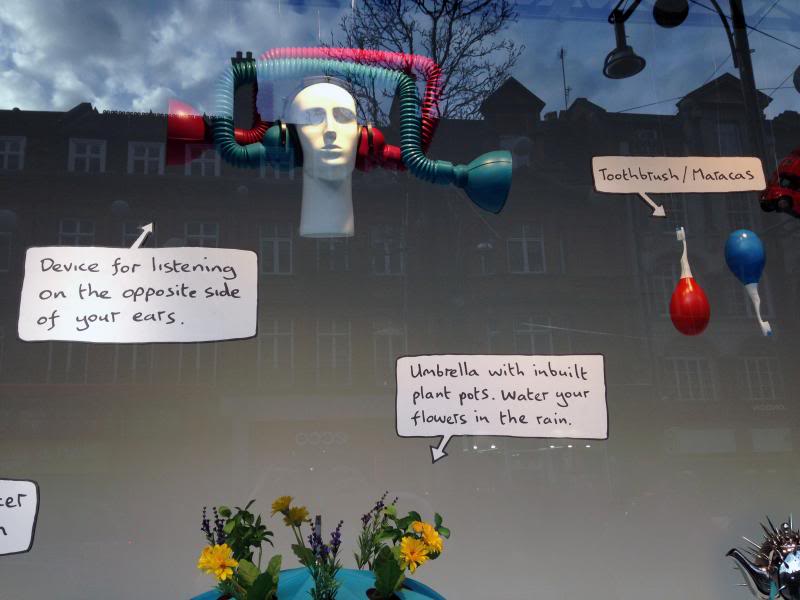 … a device so you can always be ‘all ears’, toothbrush maracas for a musical hygiene routine, an umbrella with plant pots so that you can always make the most of English weather… 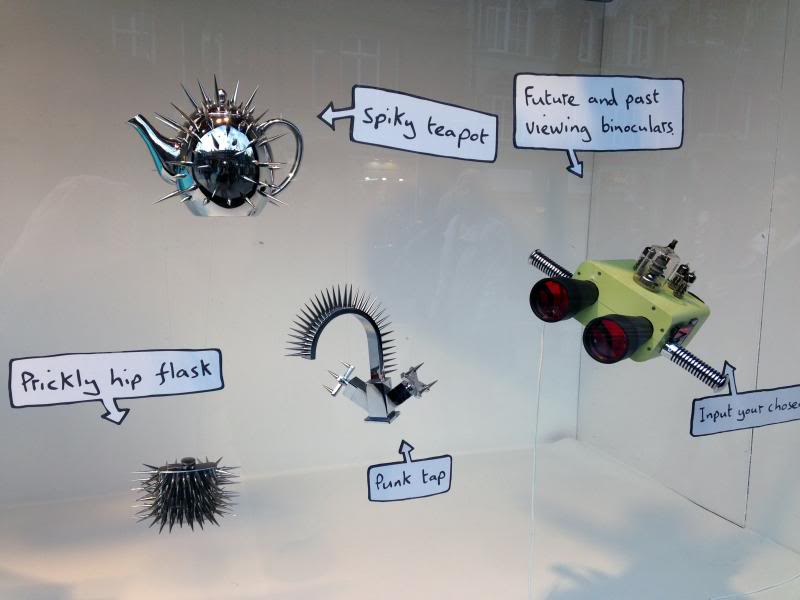 … amazing future and past viewing binoculars and a selection of spiky items – a teapot, hip flask and tap (although I’m not sure why they’re spiky other than for entertainment? Can’t deny that they look cool anyway! Dominic explains it all here) 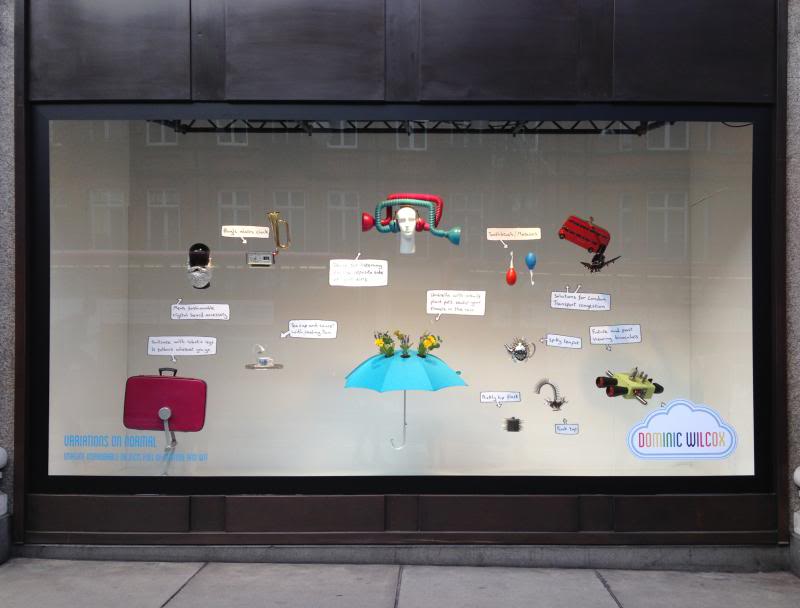 Overall the window display is clever, eye catching and smile provoking. I think that the Festival of Imagination is a brilliant idea and includes a programme of lectures, workshops and events across the London, Manchester and Birmingham Selfridge’s stores.

After a bit of research I discovered that there’s even an Imaginarium (Imagination shop) with 3D printers, impossible cameras and lighting installations inside the store which I didn’t visit but hopefully will get the chance to before it closes!

The imagination theme has also been used with the Valentine’s day campaign, although I’m not convinced… 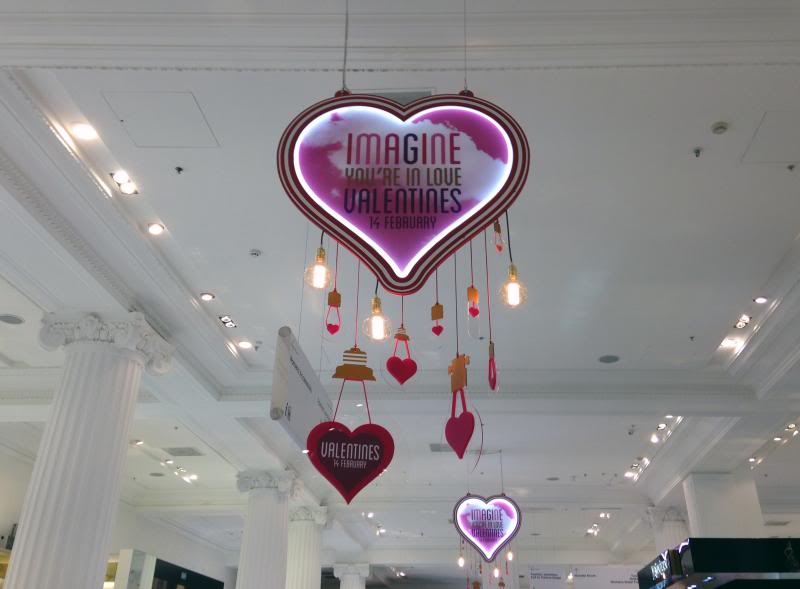 …’Imagine you’re in love’? If you’re going to be single on the 14th Feb 2014 I’m not sure that having an ‘imaginary valentine’ is going to be much comfort, but maybe just a bit awkward? Don’t worry though – you can find lots of lovely treats in Selfridges to help ease the pain! 😉

I definitely recommend getting yourself down to a Selfridges to get involved with the Festival of Imagination – let me know if you do. Long live imagination!