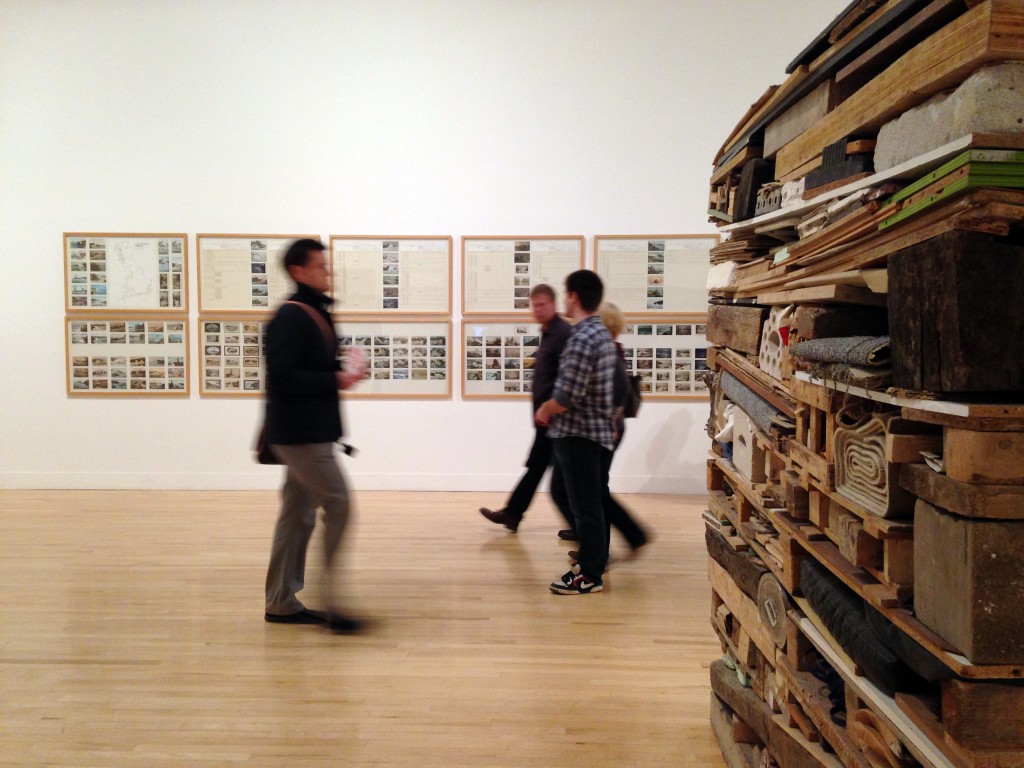 The Tate Britain is ‘The other Tate’ (in my eyes the Tate Modern is ‘the’ Tate). The Modern is a tourist hotspot and much more well known compared to it’s brother Britain which, until last year, I didn’t even realise existed – oops! As you know, I like to explore London so I headed to the Tate Britain to support all of the British art. 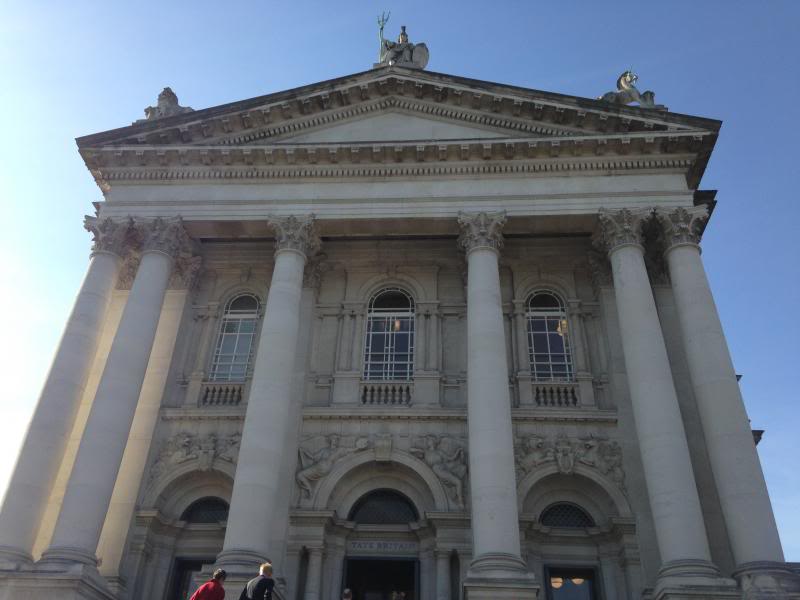 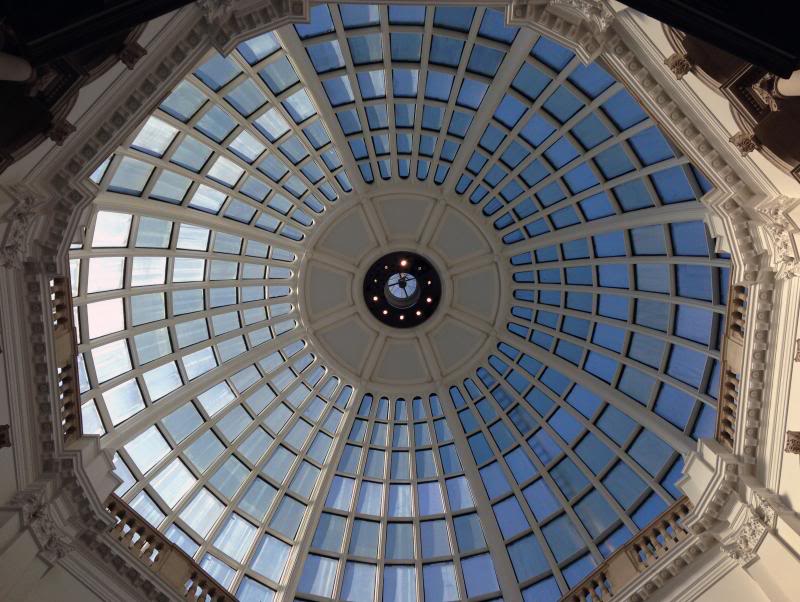 The Tate Britain has recently undergone a £45m update including a new staircase which is pretty cool although my photo doesn’t do it any justice! 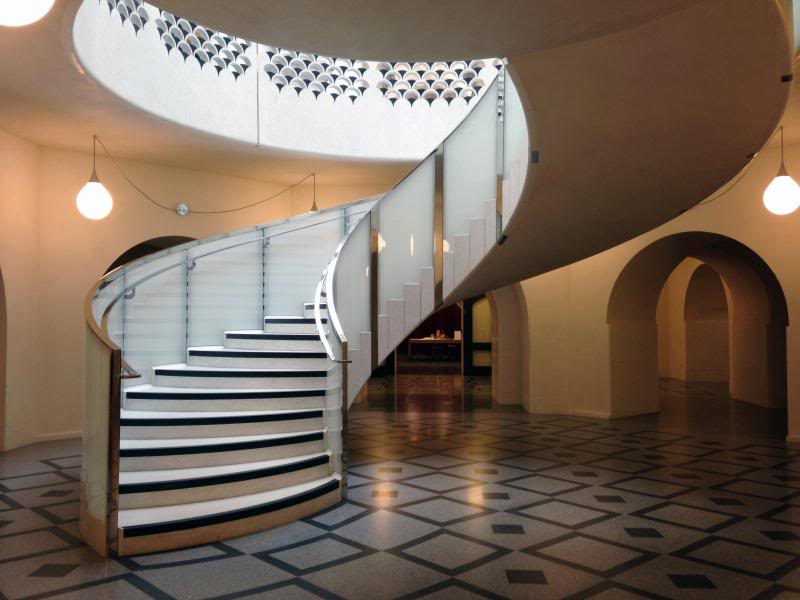 See some better photos and more about the upgrade here.

I really liked the simplicity of this way finding sign: 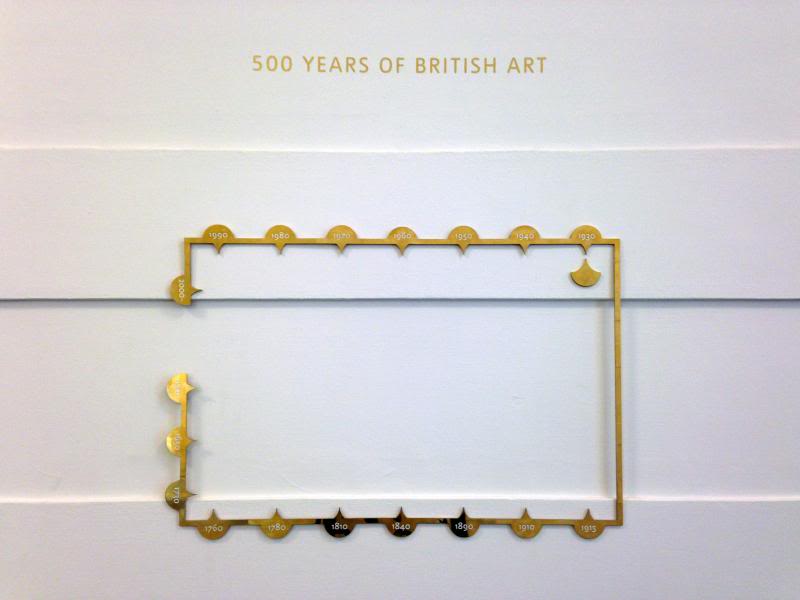 I wandered from room to room, looking and trying to understand. I won’t pretend, I’m not the biggest fan of abstract art but if there is an interesting/good idea then I can usually give it a chance. Behind a pile of rubbish (no, look on the right of this photo below – it’s literally a pile of well organised rubbish), I found a really interesting collection: Dedicated to the Unknown Artists is a display of 305 postcards collected by Sarah Hiller.

From a young age I’ve always loved sending and receiving postcards and have my own collection saved somewhere. I think they’re such a lovely but unfortunately dying form of communication in the modern day. Look at the different layouts and decorative elements used: 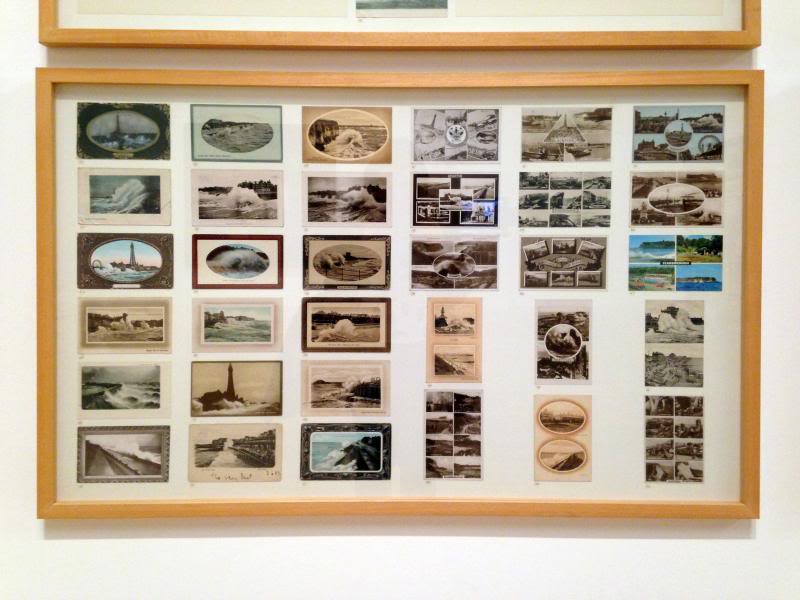 I know it’s not the fastest way to send a message, but it’s not always about speed is it? There’s just something lovely about getting a handwritten postcard from a friend or relative. There’s not a lot of space to write a message and usually the photos are awful but it’s just nice to have physical post these days – I’m sure I’m not the only one that enjoys getting post, right? 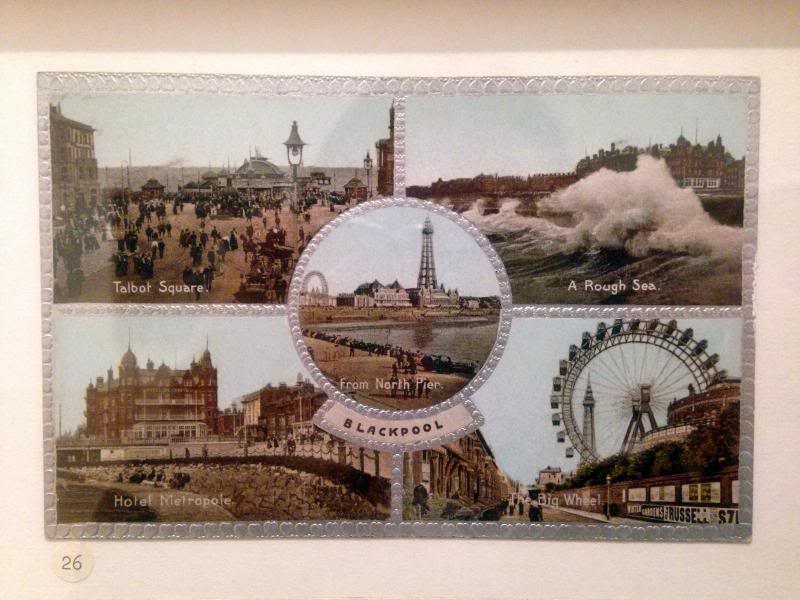 What I loved about the collection was the development and changes throughout history from the quality/method of image capture to the layouts. I even spotted a Blackpool postcard that uses a triangle shape: 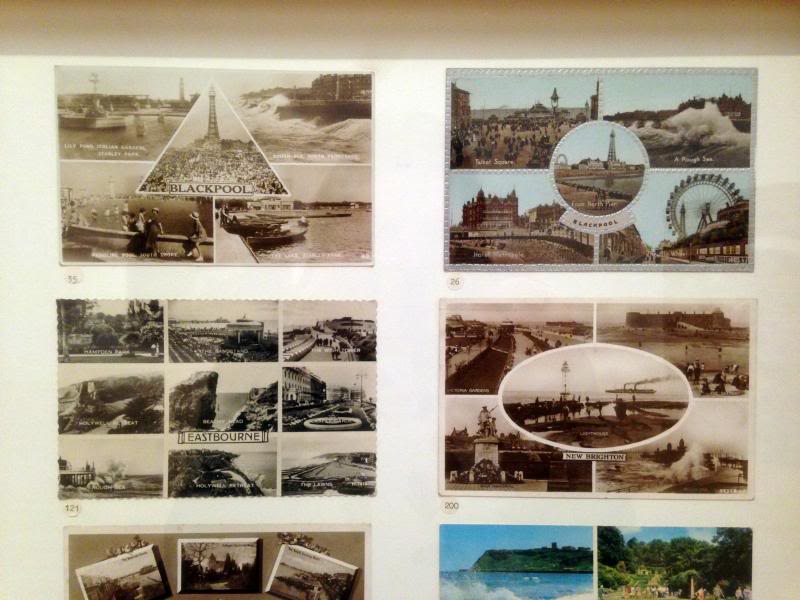 The postcards that I have known are double sided with a photo on the front and a blank space for a message, the recipients address and a postage stamp. What I saw within the collection was really interesting: 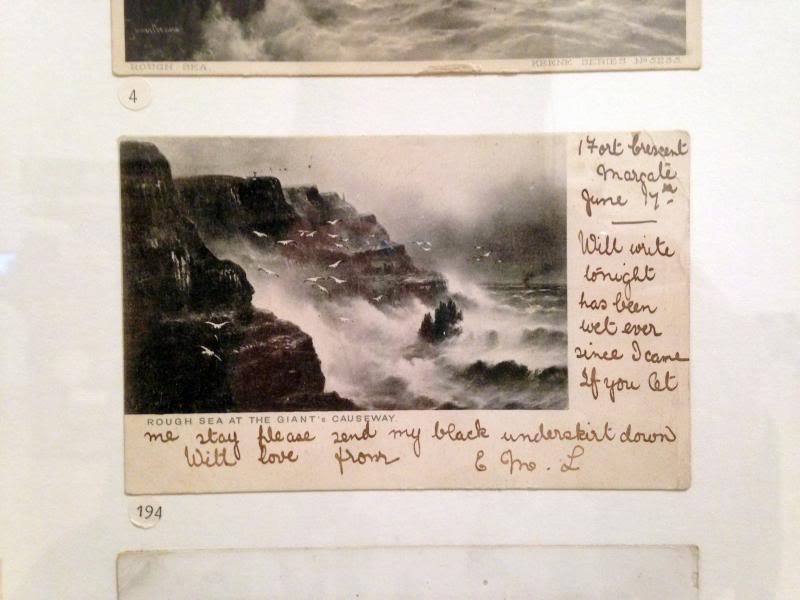 This postcard from The Giant’s Causeway seems to have a painting instead of a photograph. Yes, I know that photography didn’t always exist but I’m just used to seeing awful tacky photography on postcards nowadays so I think it’s lovely to have an artist’s work instead – It’s a piece of art in it’s own right. (However you’ll never know who spent all that time painting it, hence the collection’s title ‘Dedicated to the unkown artists’)

I think it’s a bit of a shame that the image isn’t full bleed and the message has been written in the gap on the front – what is that about? The address must be written on the back so why couldn’t the message be written there too? Strange! 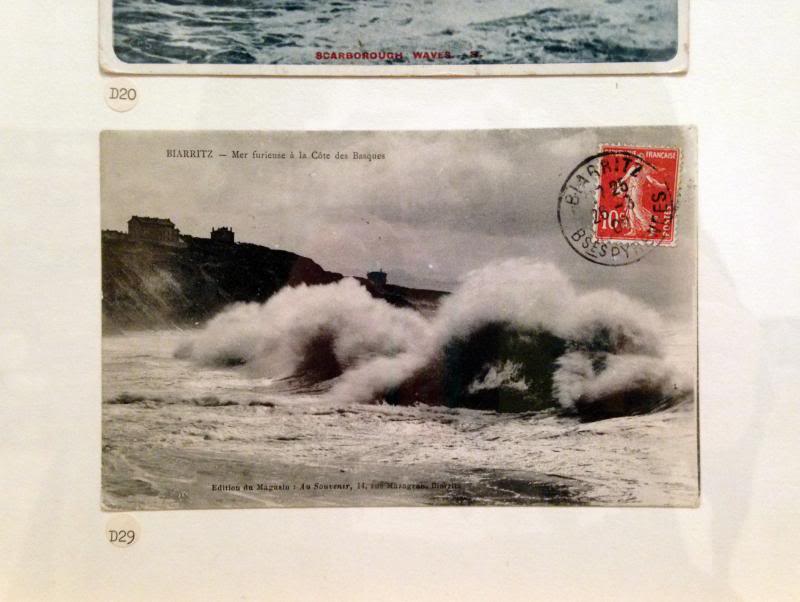 This might just be human error but it makes me smile – the stamp is usually placed above the address on the reverse but this sender decided to stick theirs on the front. 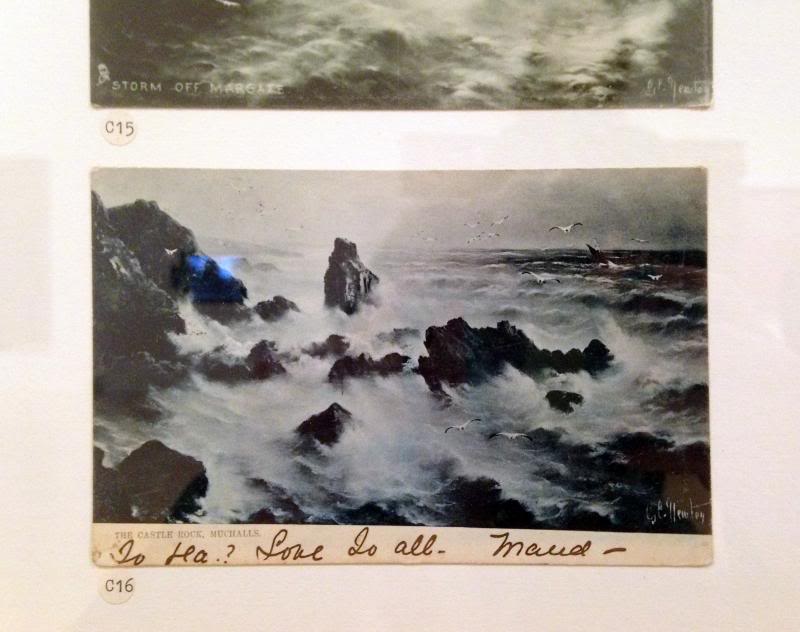 Either this is the shortest postcard message ever or ‘Maud’ ran out of space on the reverse side? ‘Love to all’ – aww people were so lovely and polite back then.

I was honestly so fascinated by Sarah’s collection – I really loved it. I wish people sent more postcards – I have a relative (Hi Diane) that has lived most of her life in America and I try to send her a postcard from everywhere I travel (so just London, Manchester and Lincoln at the moment I think ha). I love sending them to her and I think she loves receiving them. I really hope that ‘the art’ of sending postcards doesn’t die out because it’s so much better than getting an email or facebook message. 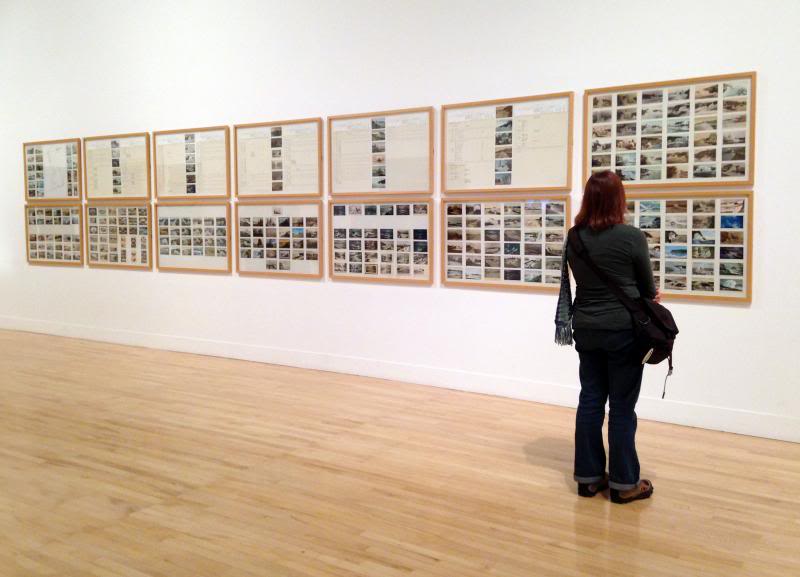 If you’re a postcard fan too, you might be interested in reading about Scarphelia’s NYC Postcard Project or this blog which I read about on the way to work one morning: 60 postcards. It’s the story of a daughter grieving for her mother, scattering 60 postcards around Paris and the discovery and responses from the postcard finders.