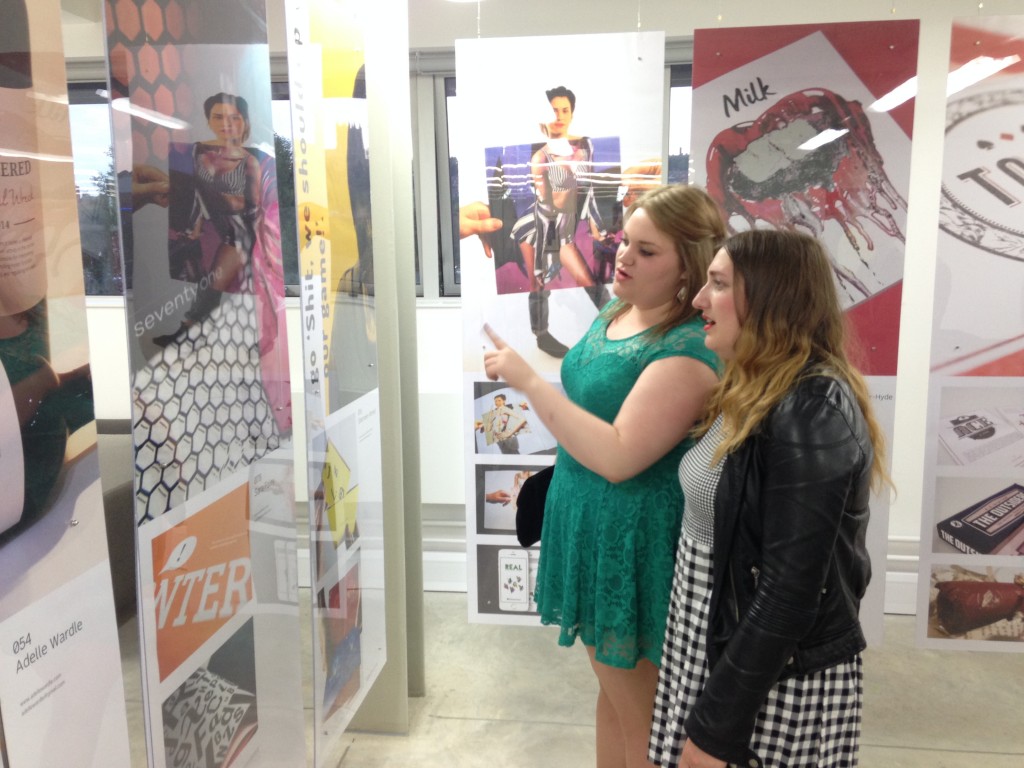 I really can’t believe that it’s been a year since Show Thirteen – where has the time gone!? 365 days on, I can’t call myself a ‘recent graduate’ anymore because there are now a fresh crop of talented Graphic Designers graduating from Lincoln – Show Fourteen.

I travelled to Lincoln after finishing work last night which meant that I didn’t arrive until late and unfortunately missed the tutor’s speeches – boo! There was still a buzz in the studio though: 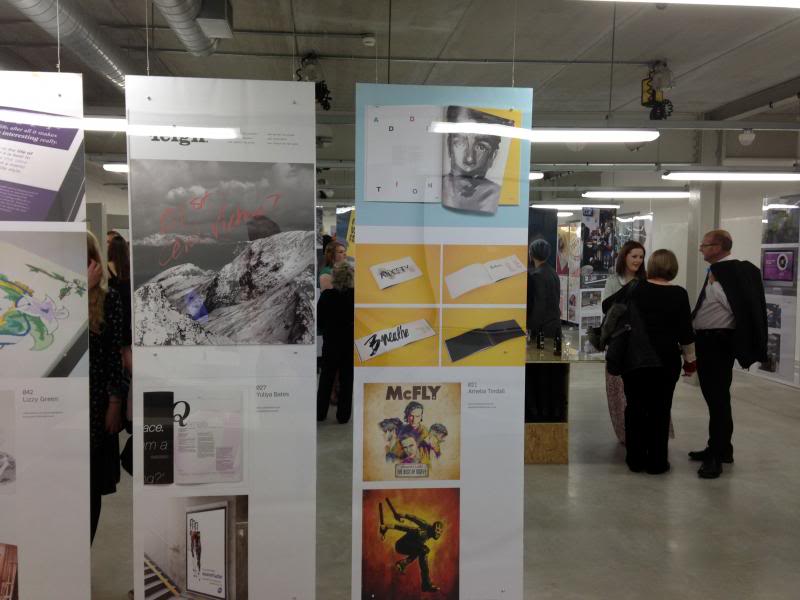 This year the work was displayed using perspex hanging panels. It’s a bit awkward to photograph with all of the reflections but I thought it was a great use of the space and matched the new contemporary building. A comment was made last year about Show Thirteen looking like ‘it had been thrown together at the last minute’ because for some panels it was ‘just a roll of paper attached to a wall’, so I hope the new system impresses! 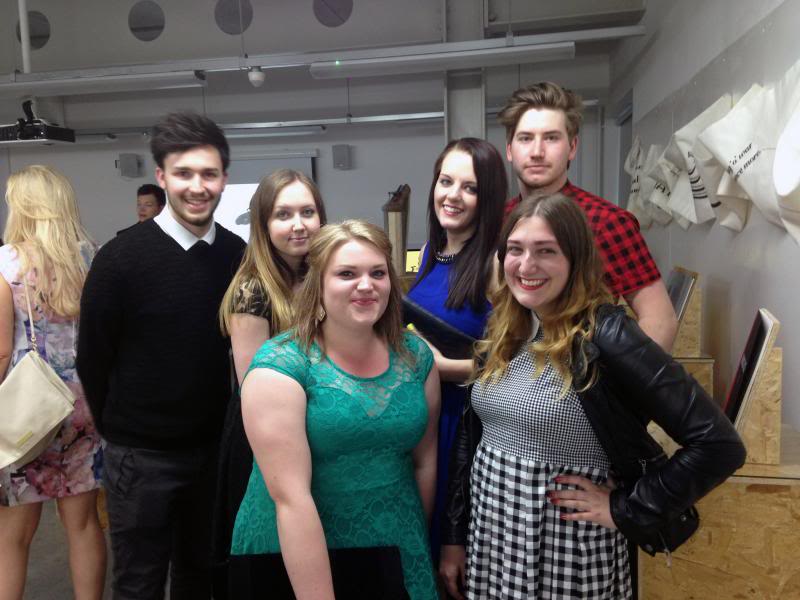 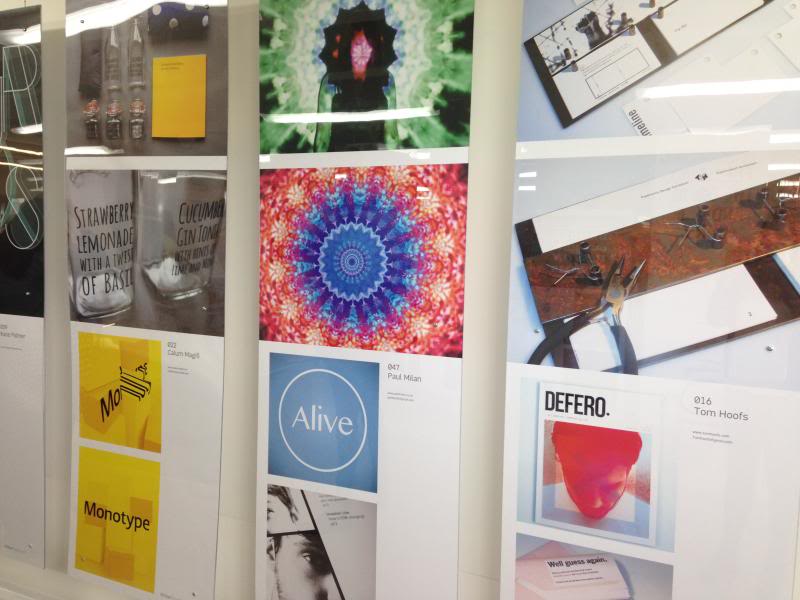 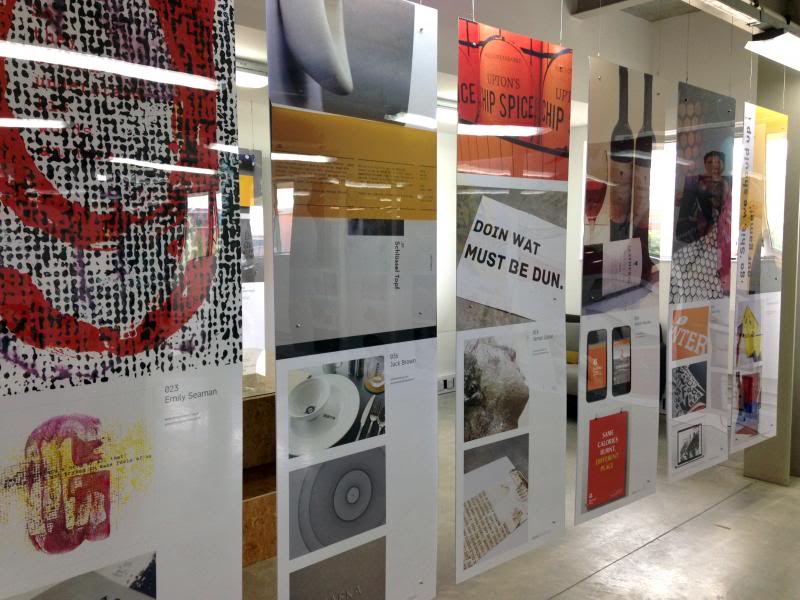 This wasn’t my first time in the new building but I actually found it quite hard going back to a course that I had so many memories of to find that almost everything had changed – the building, the surroundings, the methods, the atmosphere, the people. My time at Thomas Parker House felt like a distant memory and I was quite sad about it in a way. However one thing has remained the same – Lincoln still has great students which was clear from the work on show. 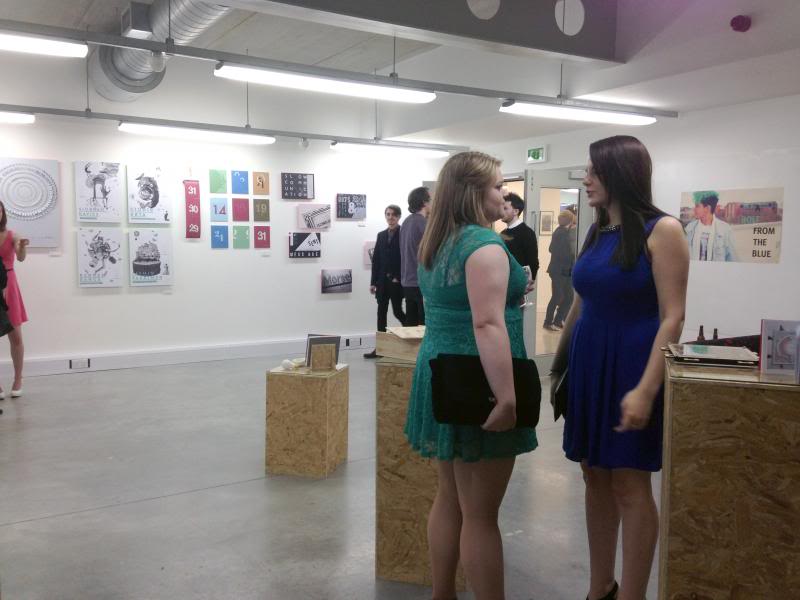 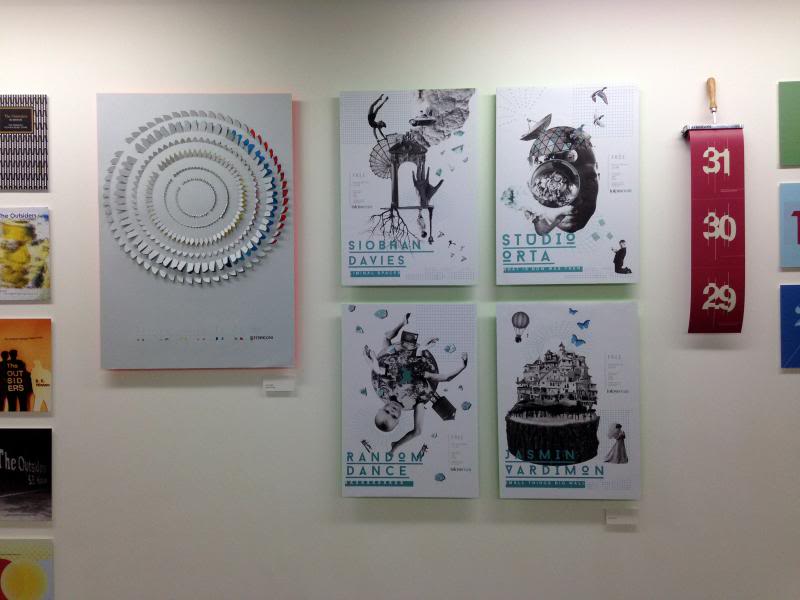 There was a selection of work from the second years too: fluoro mounting is a genius idea (where have I seen that before ha) and I really loved the Fedrigoni work by Emily Butlin and Louise Davies. 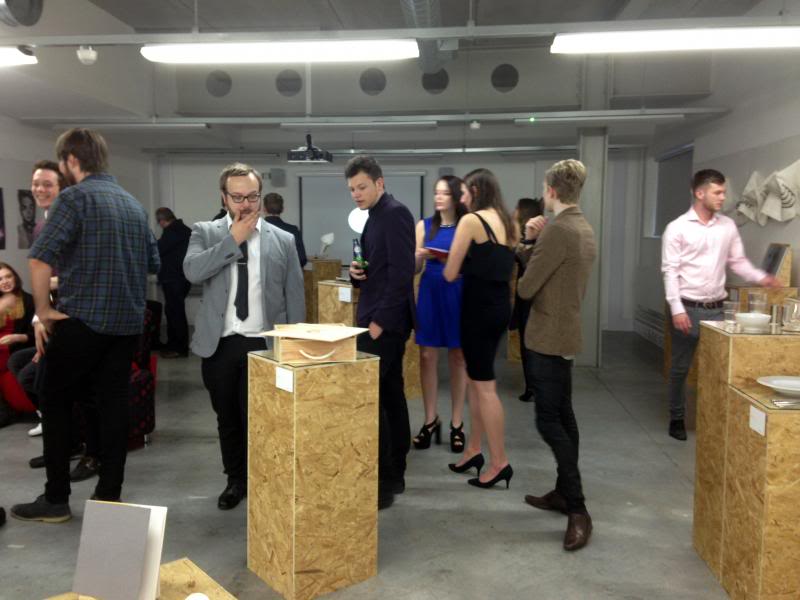 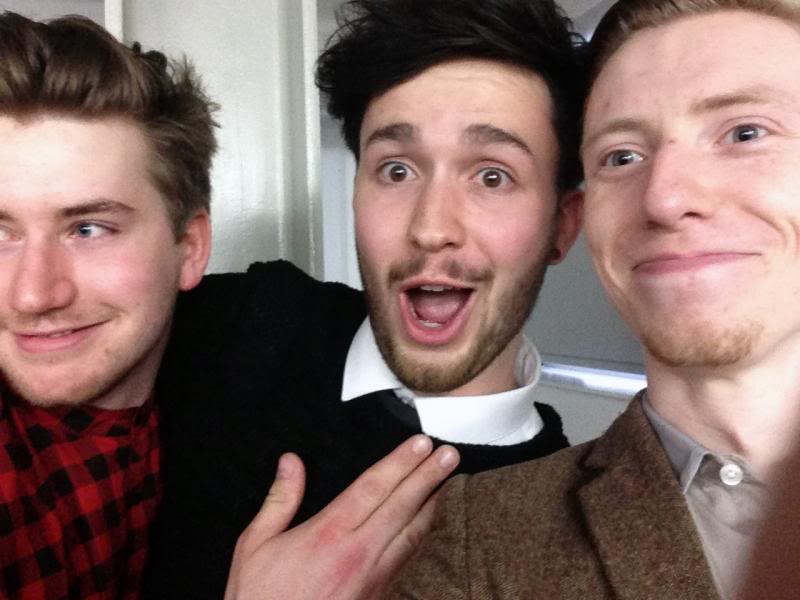 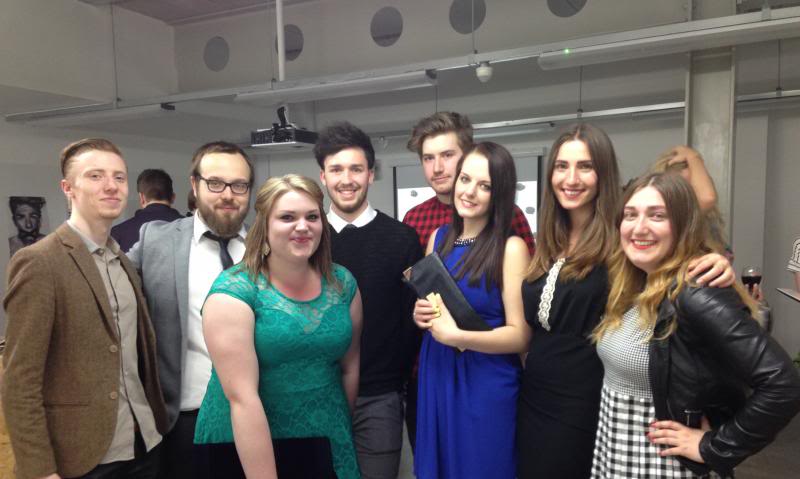 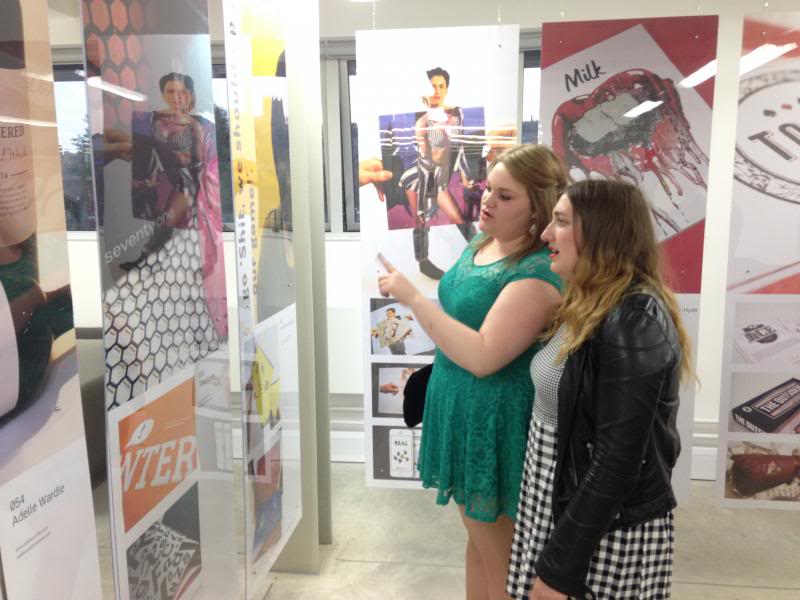 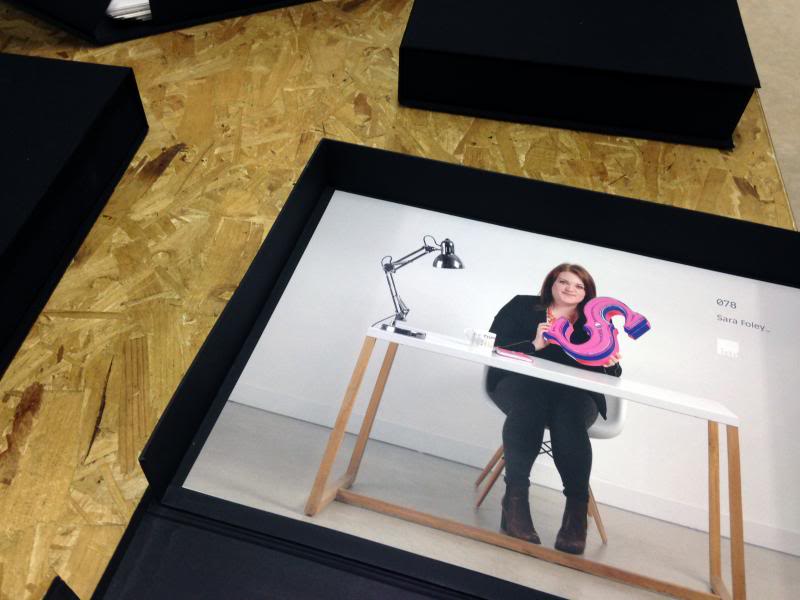 Each student had a box style portfolio which looked very professional and I preferred to the plastic sleeved ones used for Show Thirteen! 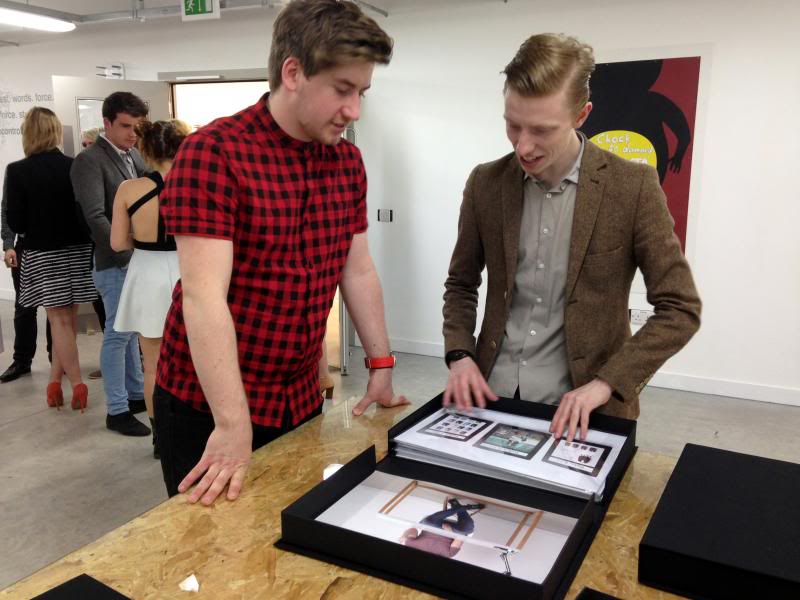 Glen talks Jack through his portfolio, whilst Ben tries to persuade everyone to pick up his business card: 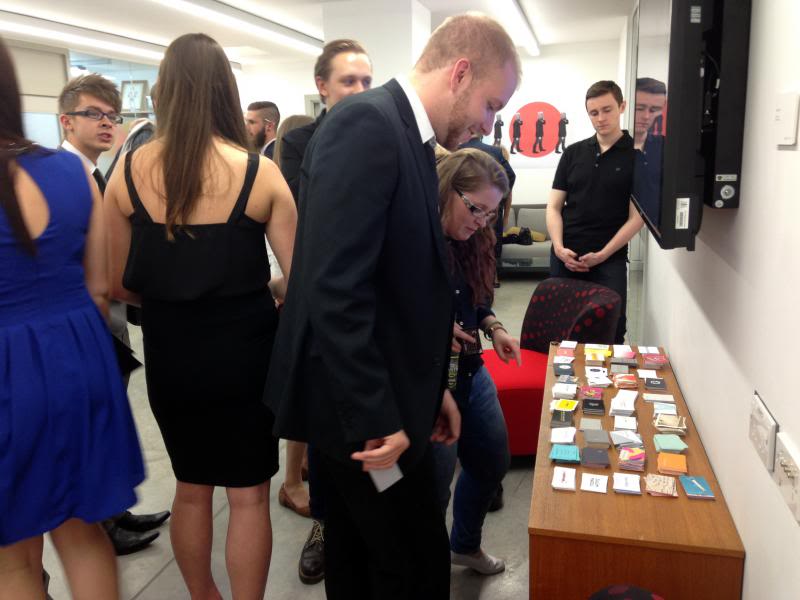 There are some real characters (Peel and Walker I’m mainly looking at you) in this year group and I think they will provide a lot of entertainment(and great work, of course) to the lucky studios that take them on for internships/jobs. I spoke to a lot of students who had already secured jobs or internships which is great news, so again congratulations to you! I think the Lincoln legacy is still going strong for another year at least – no pressure class of 2015!

Well done Show Fourteen – Show Thirteen was a hard act to follow but I think you pulled it off! 😉

Are you going to be around Lincoln soon? Show Fourteen is open now until Monday 16th June from 10am – 4pm. Go and check it out – there was way too much for me to fit into this blog post!