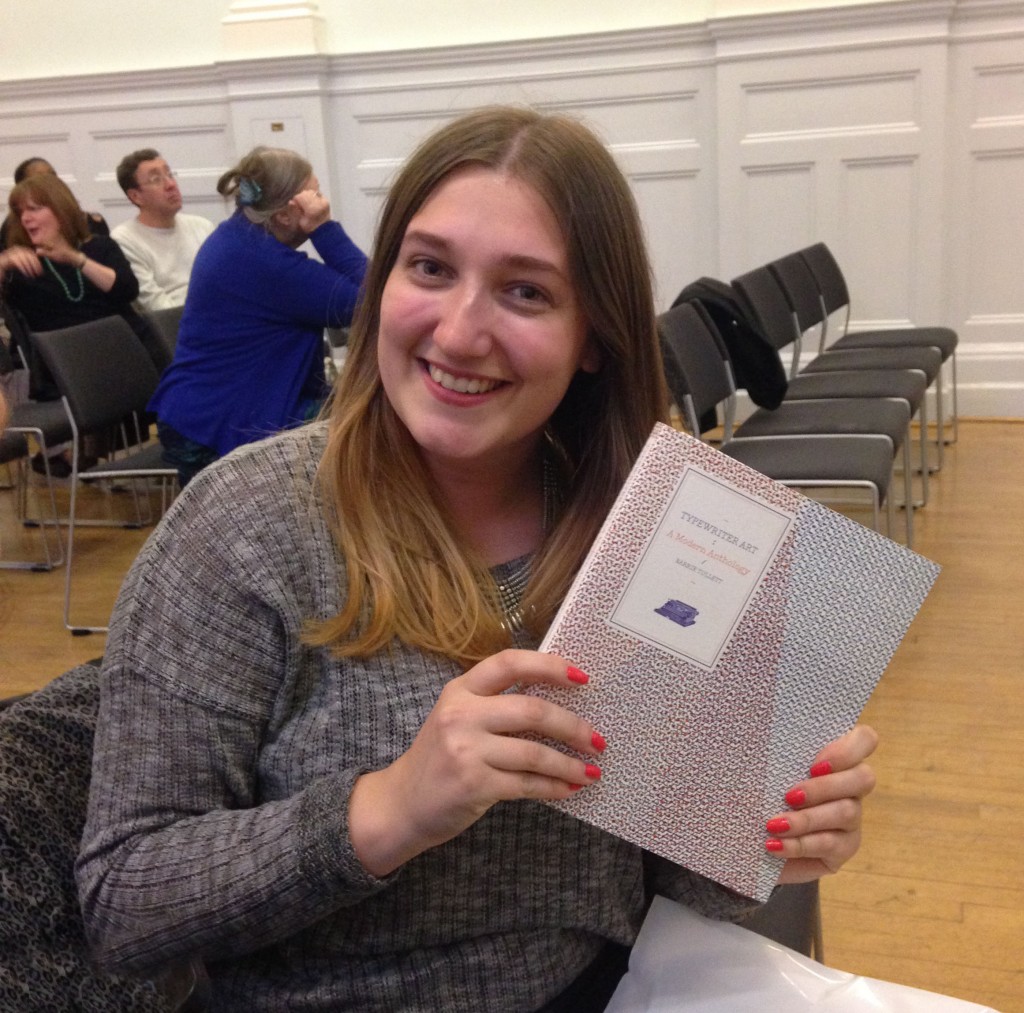 When I was in my 2nd year at University there was a rumour (on the grapevine) that my tutor, Barrie Tullett, was going to be writing a book. Well 2 years later and I was attending a talk about the rumoured book – it’s real! Typewriter Art: A Modern Anthology is a labour of love. Barrie and typewriters – I don’t know if anything could ever come between them (other than money) and that’s why Barrie’s book was always going to be amazing.

I saw on twitter that he was giving a talk about typewriters and his book, so I bought a ticket straight away. Any student from Lincoln will know that Barrie’s speeches are legendary, so just imagine what a whole talk would be like!? No pressure Barrie… 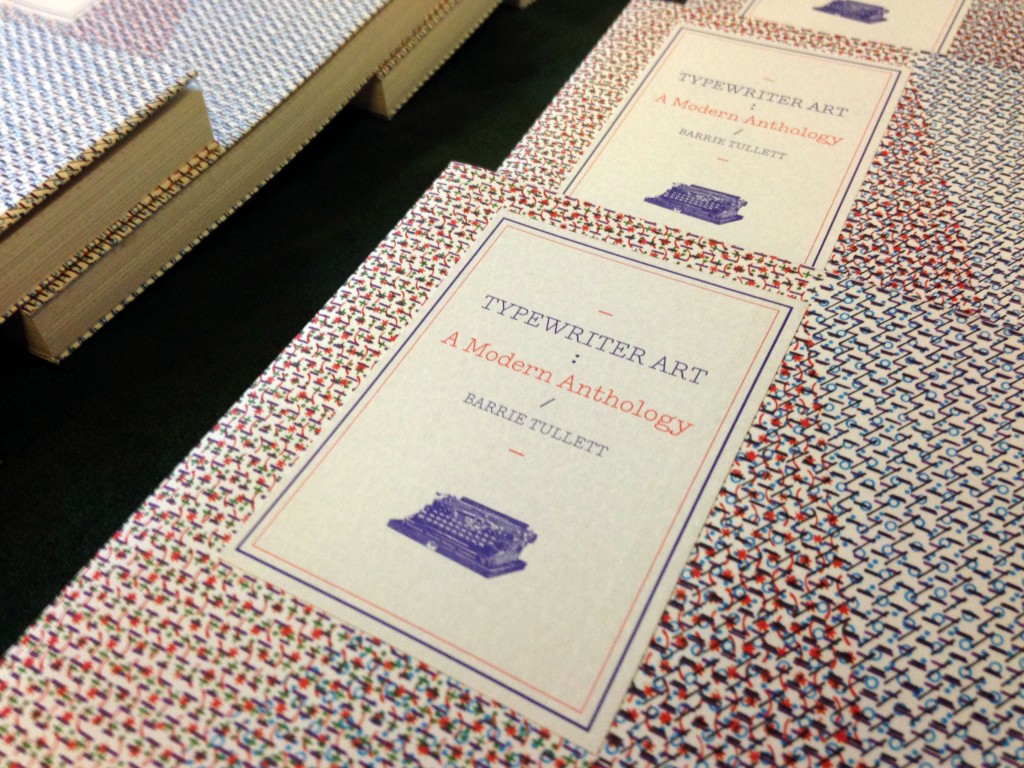 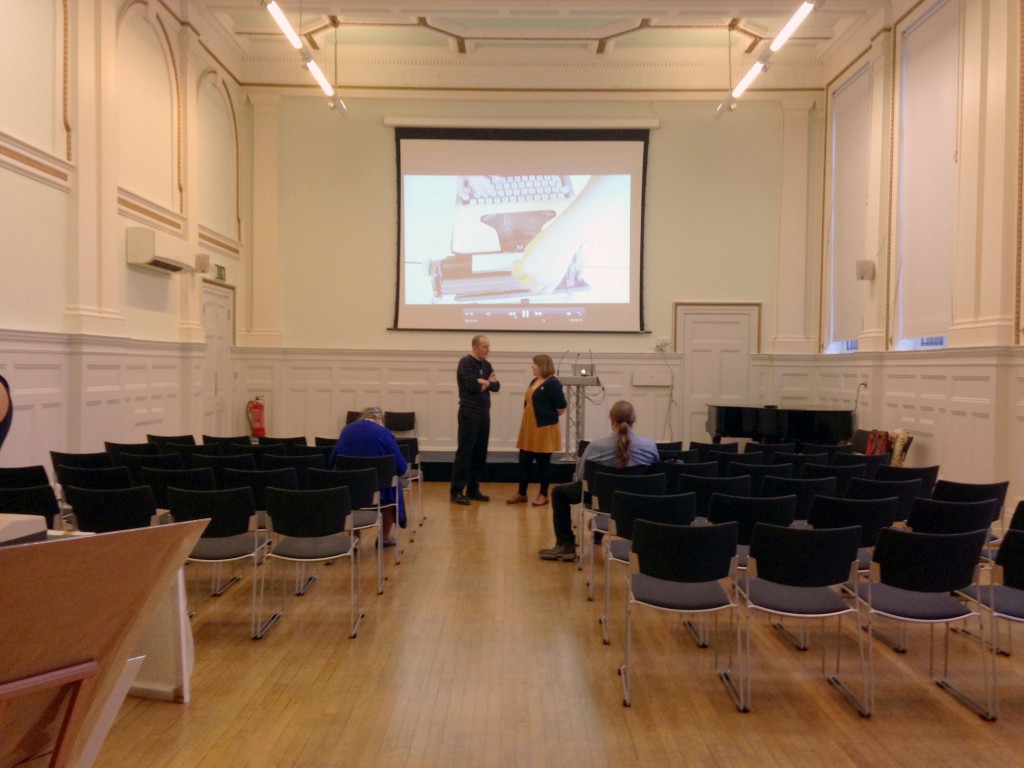 I met Sophie outside of St Bride’s Library where we were greeted by a nervous Barrie – he was worried that nobody was going to turn up, but the room filled up of course! We were joined by other more Lincoln Alumni – Ben and Dan Collier. The Lincoln support was strong in the room, and of course we were sat on the front row! Look at the excitement on their little faces: 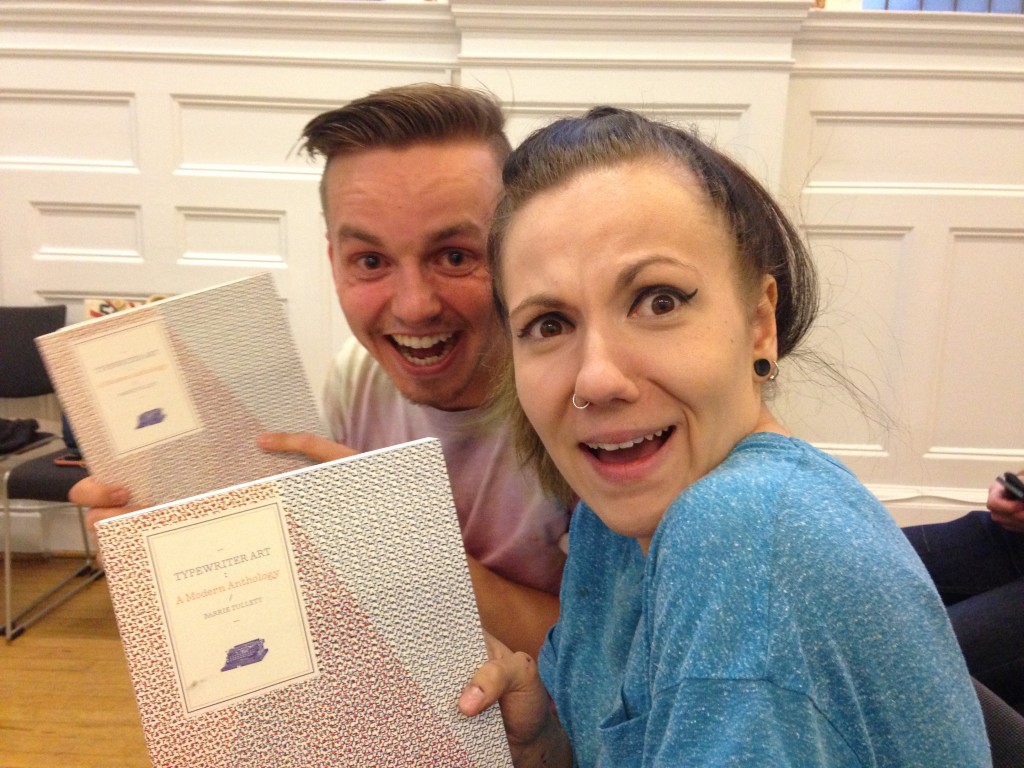 We bought a copy of the book each and Barrie kindly signed them for us: 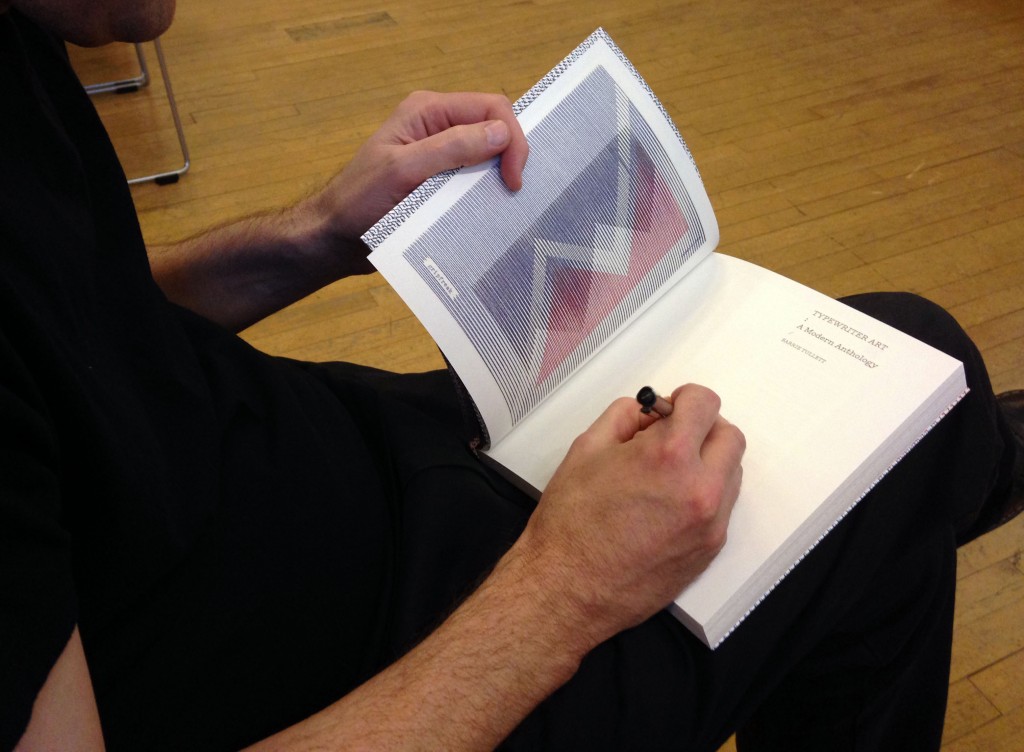 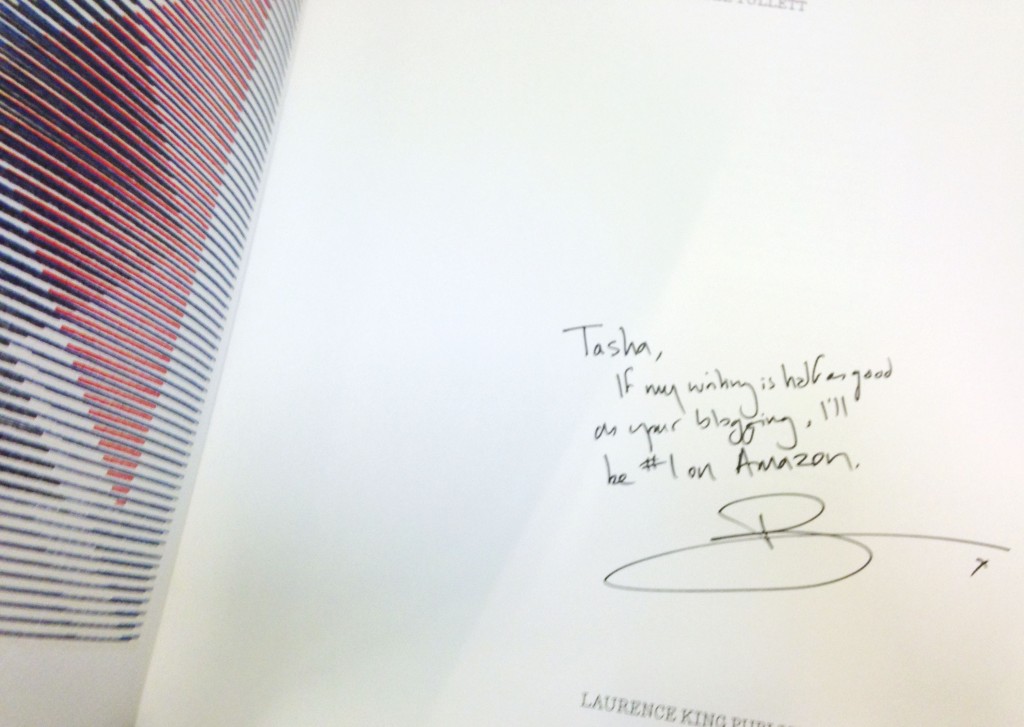 On the evening typewriter artist Keira Rathbone was ‘live typing’ drawing the audience. It was the first time I had seen this done and it was really interesting to watch how she would move the paper around and which letters she would press the most. 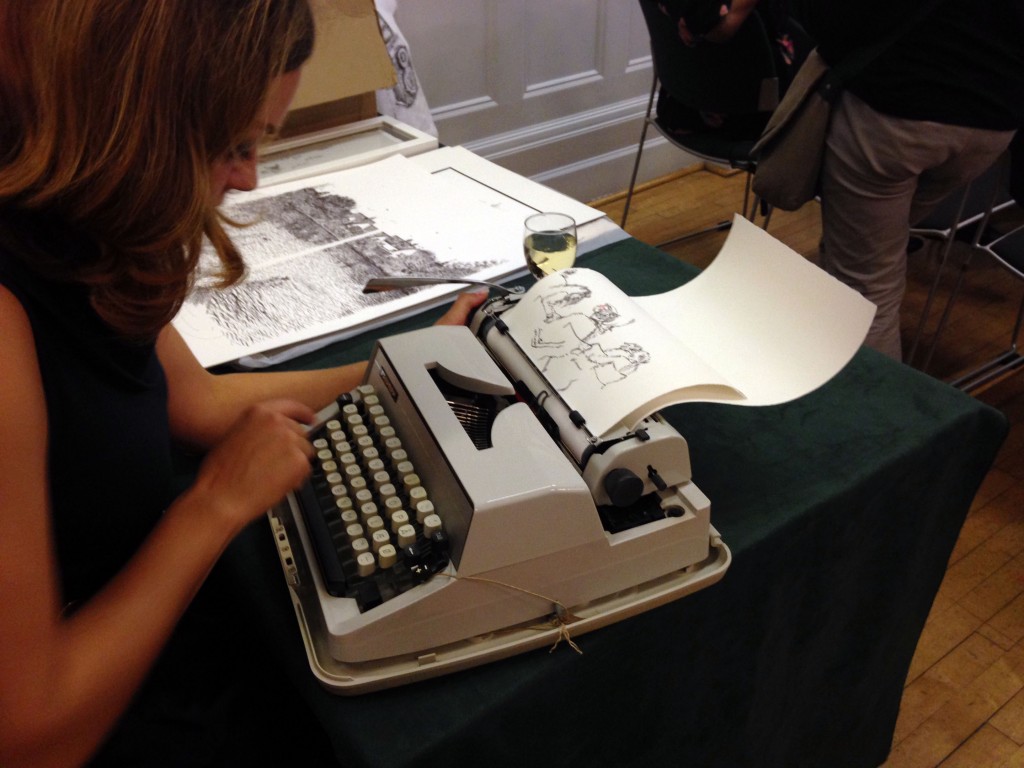 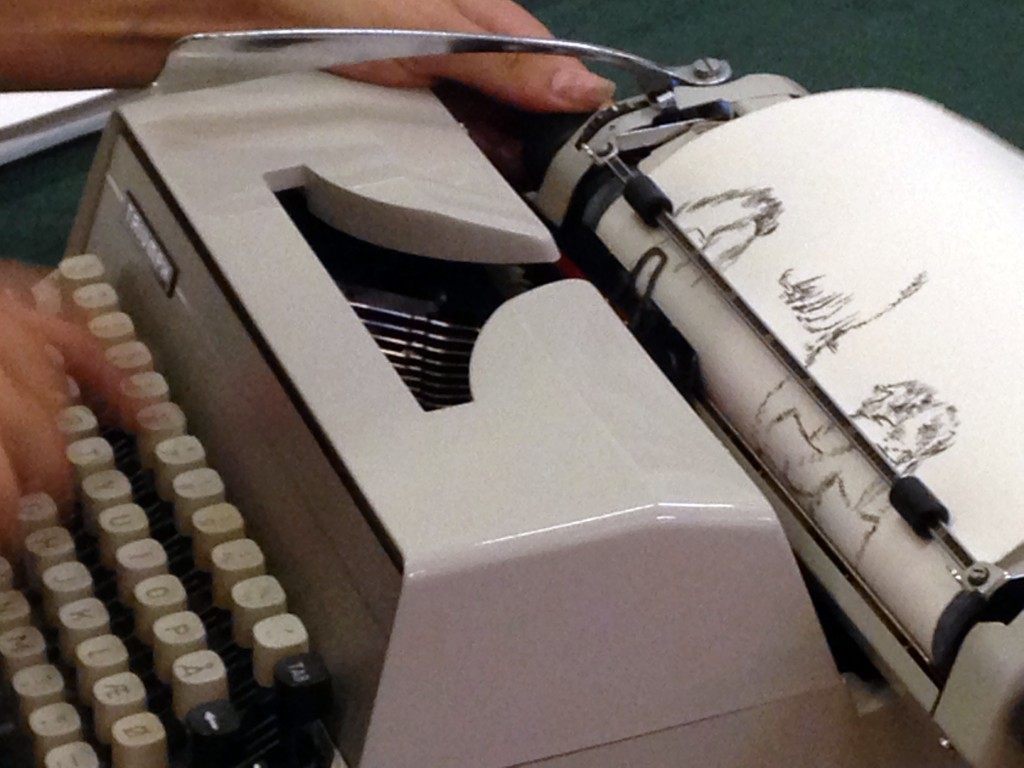 And then it was time for the main event – Barrie’s circus had come to town and it was time to unleash the typewriter alphabet: From Q to M! Q is for… Qwerty! 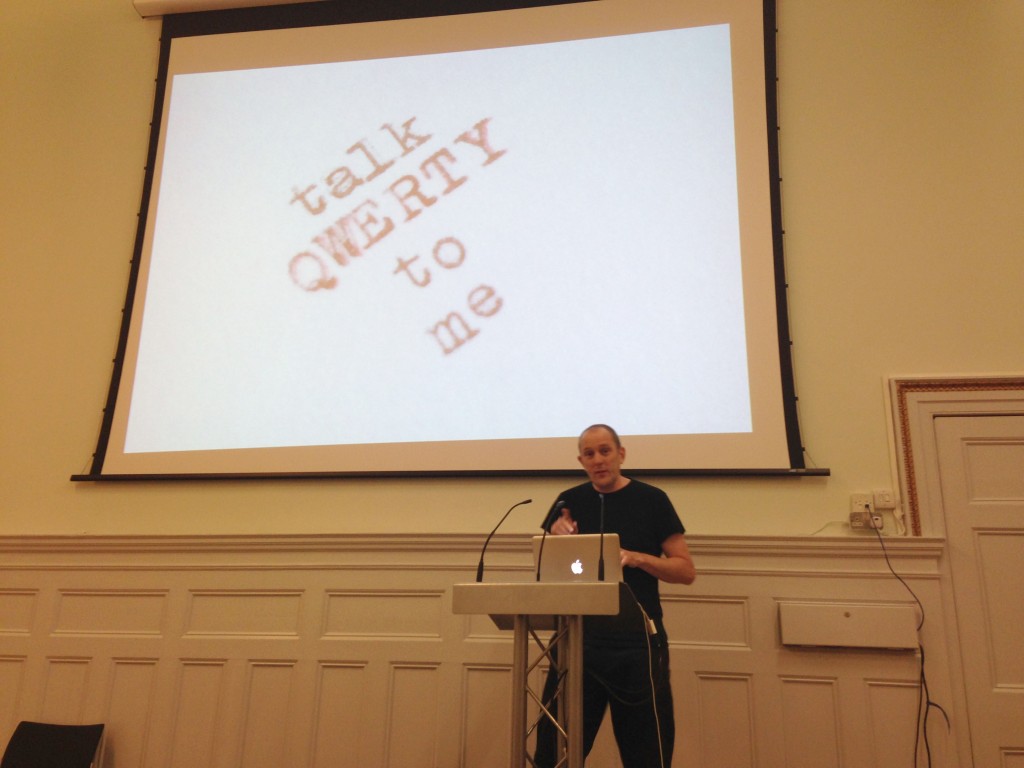 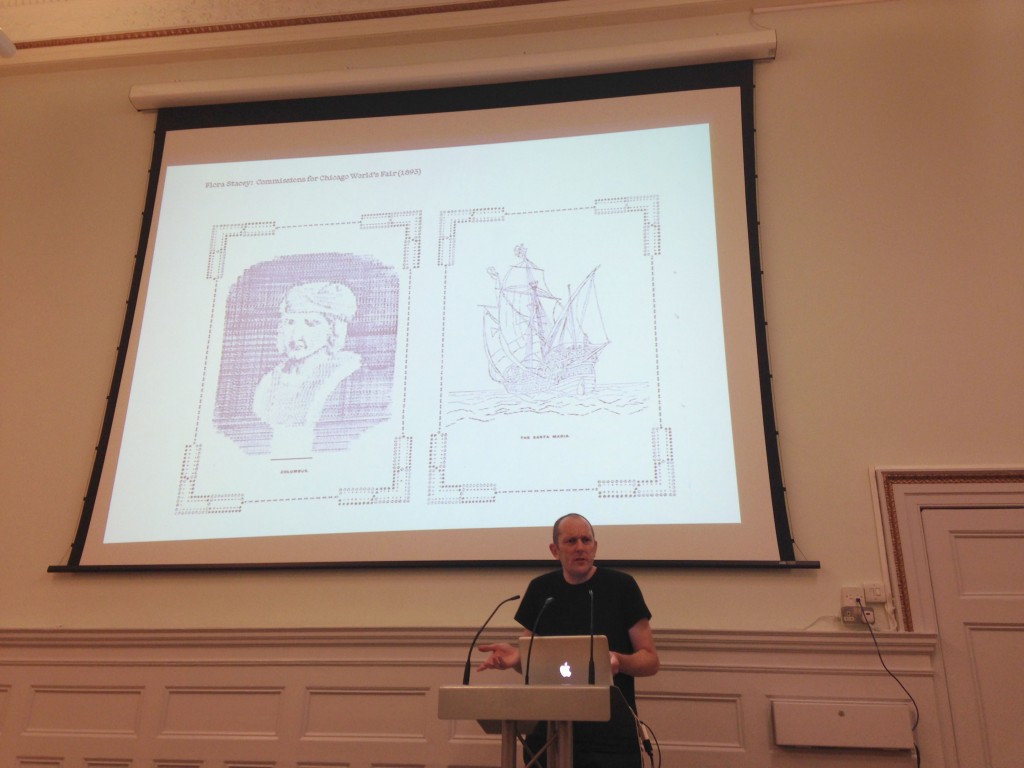 F is for… Flora Stacey – recognised as the earliest typewriter artist.

R is for… Ribbon. How cool are all of these different typewriter ribbon tins? 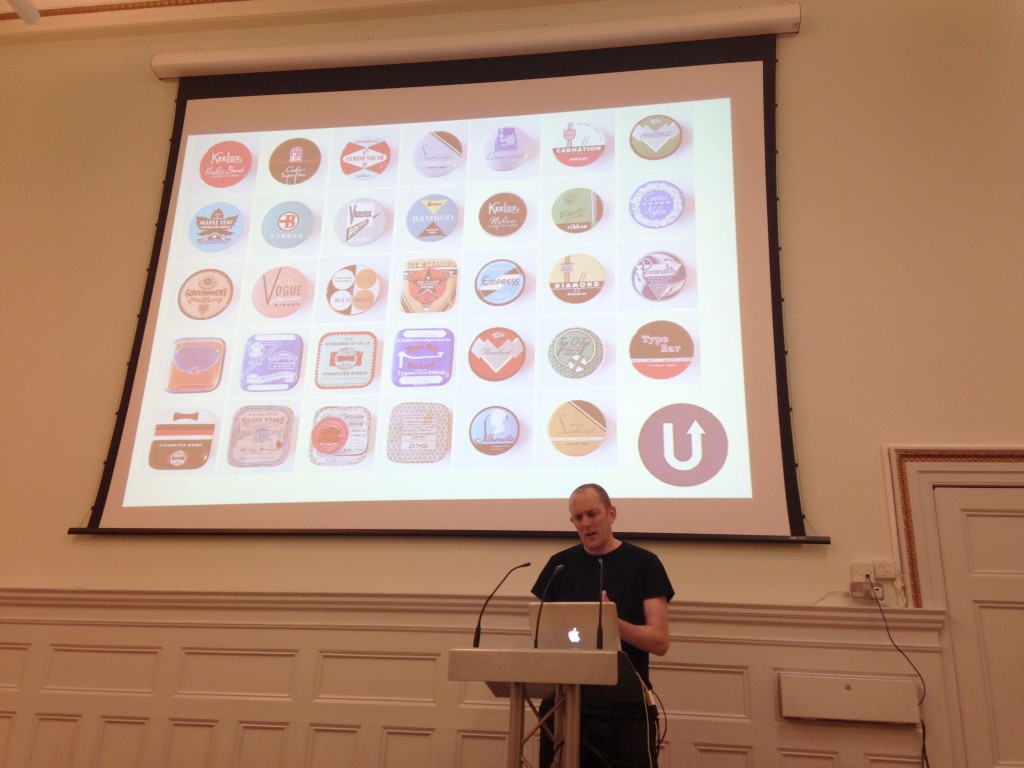 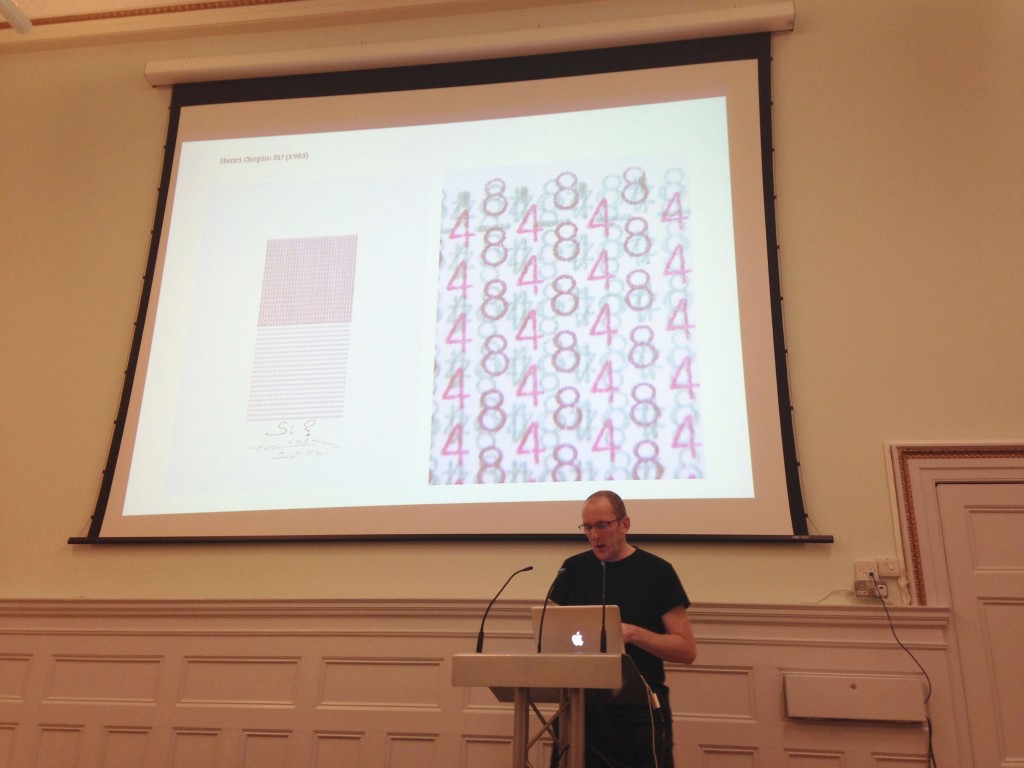 C is for… colour. The use and combinations of colour within typewriter art can add another dimension to a piece.

C is also for… concrete poetry. Barrie shared some of his own work (which is a rare occasion!) from his youth with us. It’s a wall and a bird, obvs. 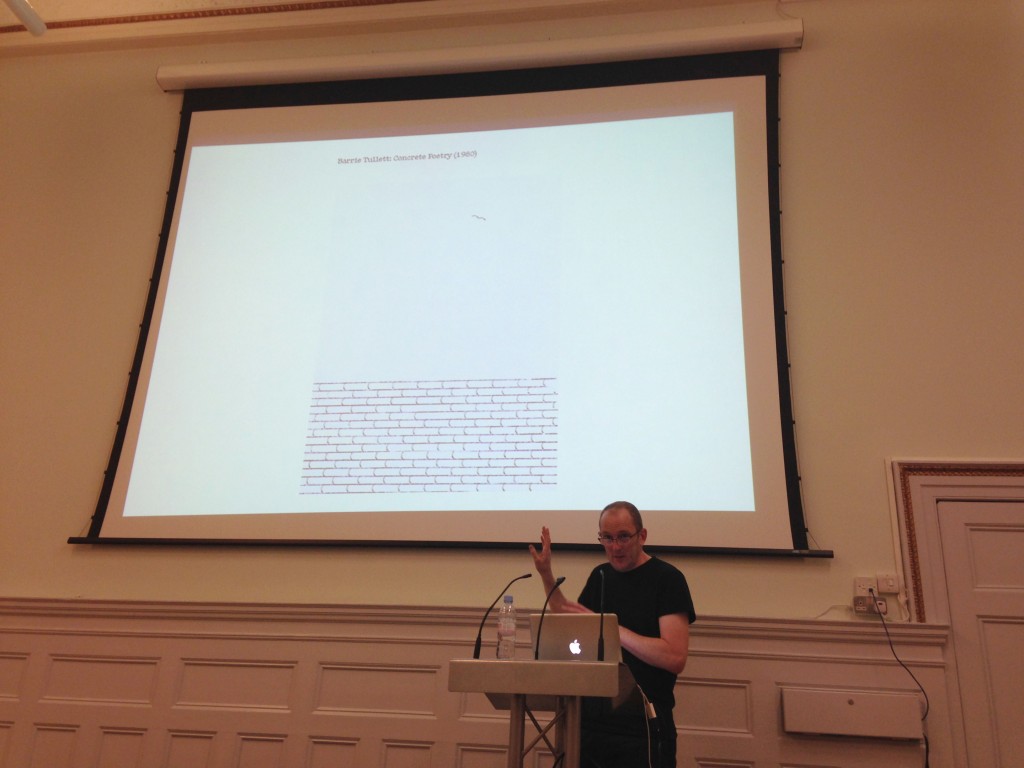 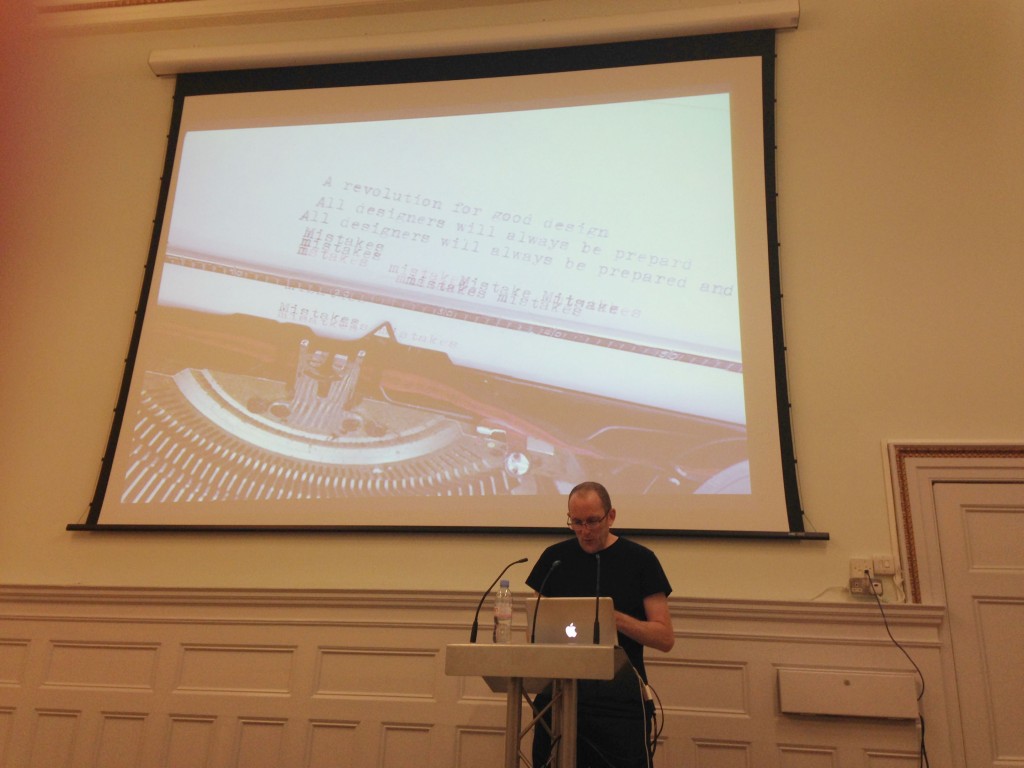 R is for… Russian. The Russian typewriter story. I loved this story because I was actually there when it happened. Last year I helped in a couple of workshops back at Uni with the 1st years. They were creating a manifesto without the use of computers (because the gestapo would find out) but could use illustration, letraset or typewriters. Barrie brought all of his typewriters out of the cupboard (which he never did for my year -hmpf!) and allowed the 1st years to use them, including a Russian typewriter. One of the students sat down at it, looked very confused and then walked away. Then Barrie played a bit of a trick on him – he swapped it with an English typewriter. It was quite amusing!

Barrie also shared some student work featured in his book, including Jo’s (who I work with at gpstudio) ‘Nothing’. 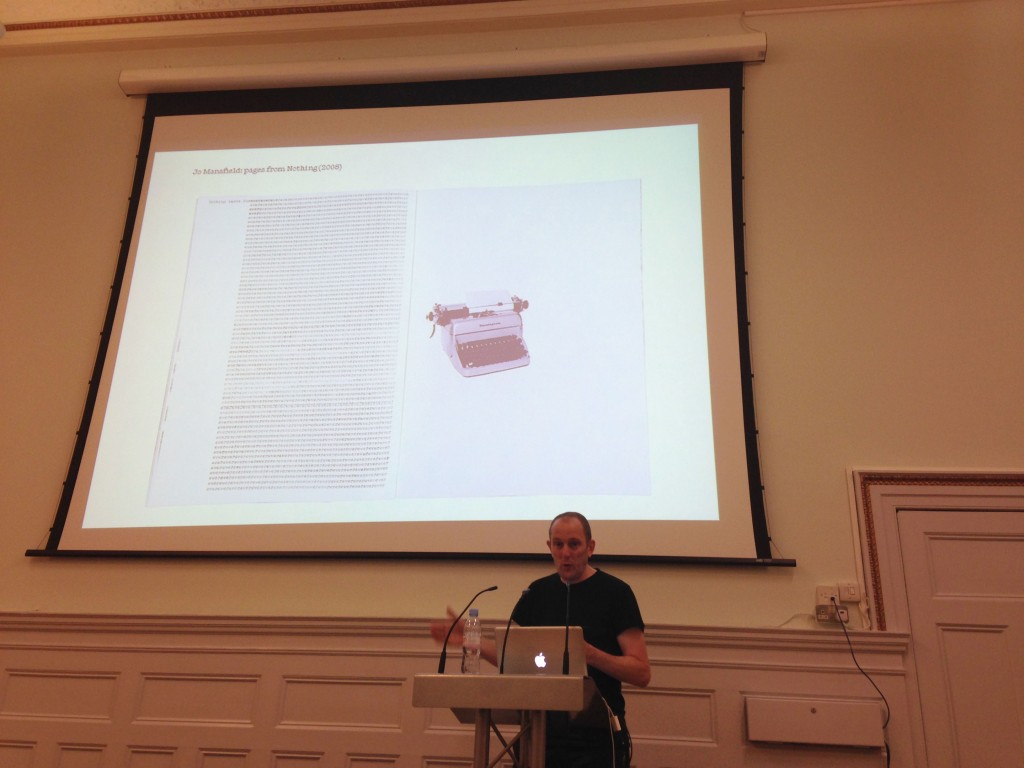 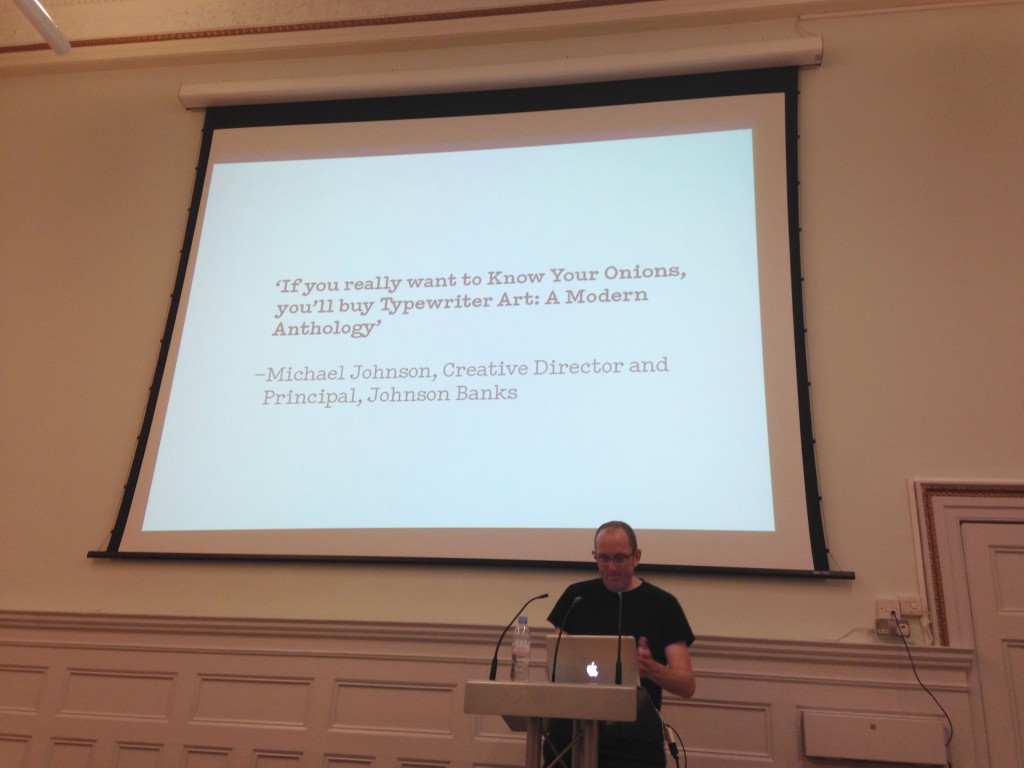 The talk ended on a humorous note with Barrie talking about his Amazon bestsellers list rivalry with Know Your Onions by Drew de Soto and putting words in the mouth of Michael Johnson of Johnson Banks. I wonder is he’s got anything to say about Barrie’s book yet…? Speak up Michael!

If you’re interested in reading more about Barrie’s findings, get your hands on a copy of Typewriter Art: A Modern Anthology. If you already know your onions from your potatoes, it’s the book for you! 😉

But in all seriousness, I’m really proud of Barrie. The book is brilliant and although he is very modest about it, it’s a real achievement. Well done Barrie – you continue to inspire me! You can find more of Barrie’s work at The Caseroom Press.

In it to win it