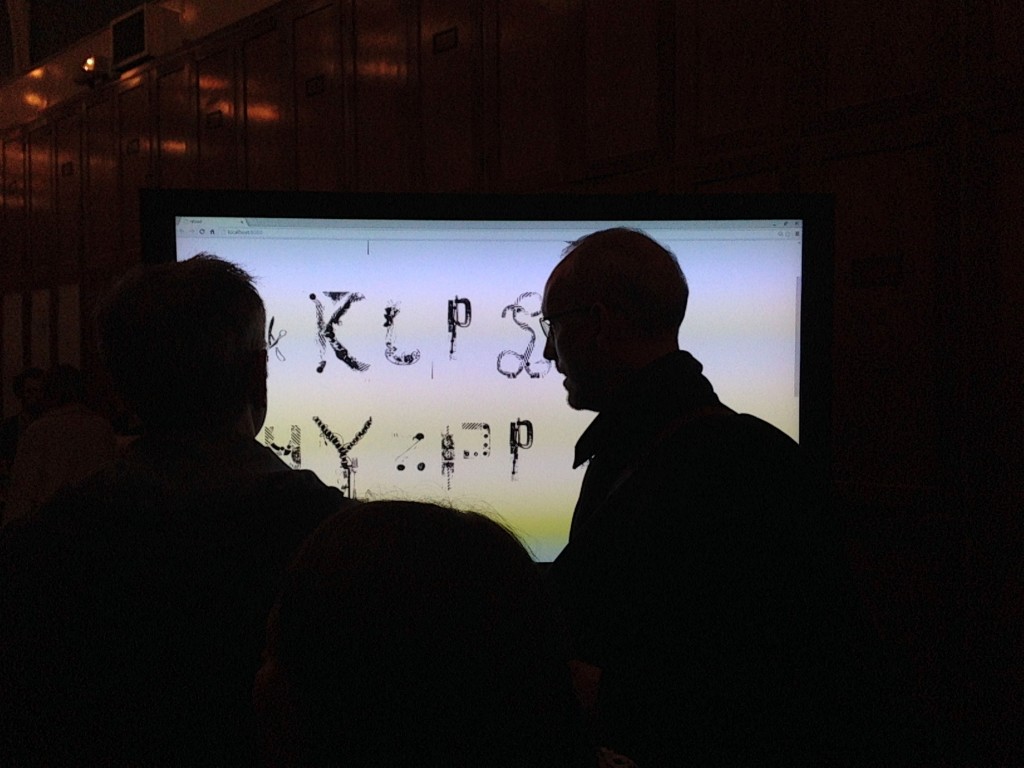 To most Friday 28th was Black Friday, but for Font Fanatics it meant a Typography edition of the Friday Lates at the V&A: What the Font!? After I had booked the day off and braved starting my Christmas shopping (without realising it was Black Friday – stupid move) Jack & I headed to the V&A for some culture… 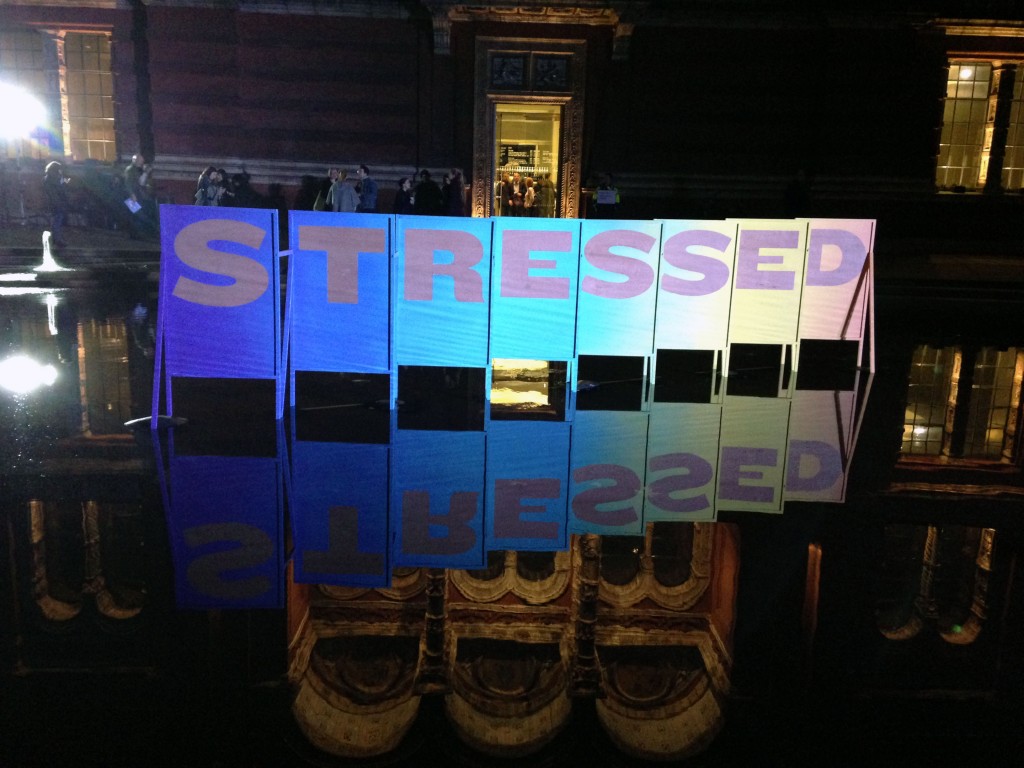 After the day I’d had, I thought the Stressed/Desserts installation by Netta Peltola was quite fitting!

There was a Dalton Maag UV letterforms installation in the Grand Entrance, with lots of noise described as an eclectic mix of ambient and electronic tunes from Dalton Maag’s resident DJ ‘Thee Hausfly’ with type on a screen to accompany… 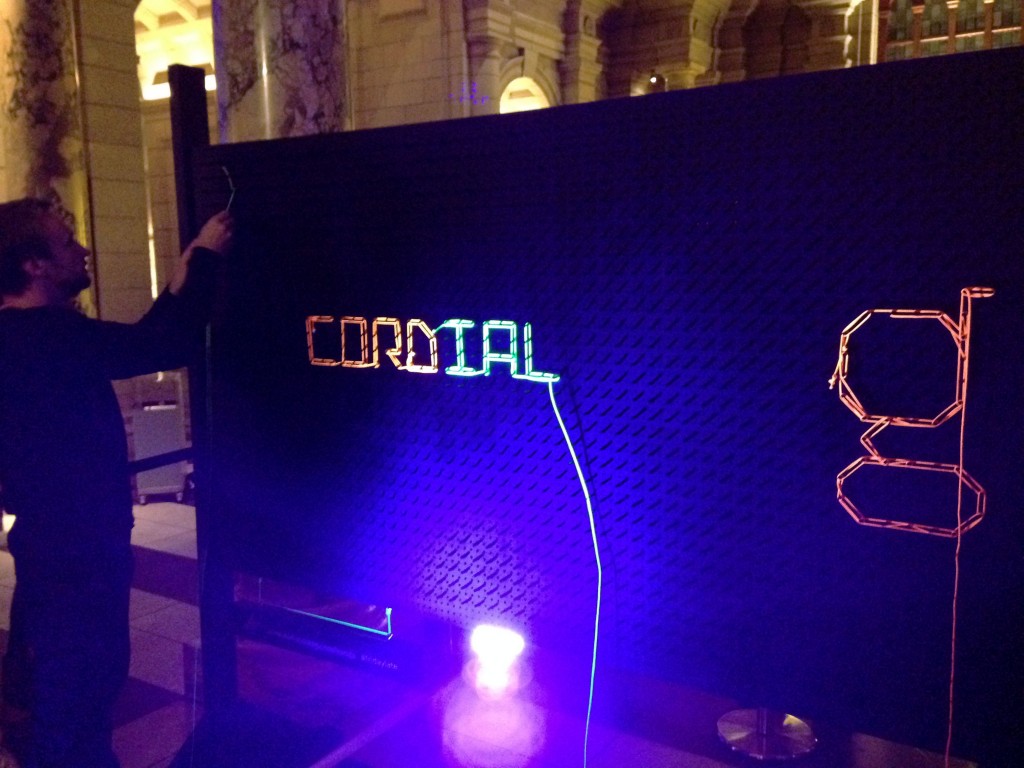 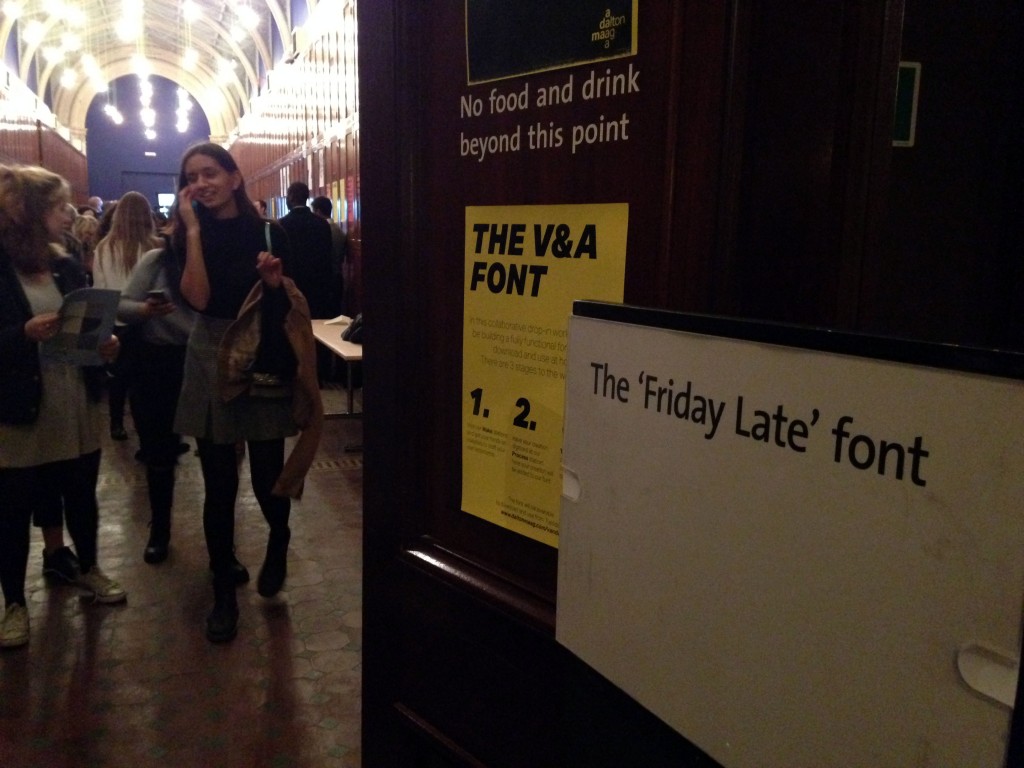 and in the learning centre there was a buzz about making a ‘V&A font’. Stamps and weird items of all sizes and shapes were being used to produce some striking and some vague letterforms: 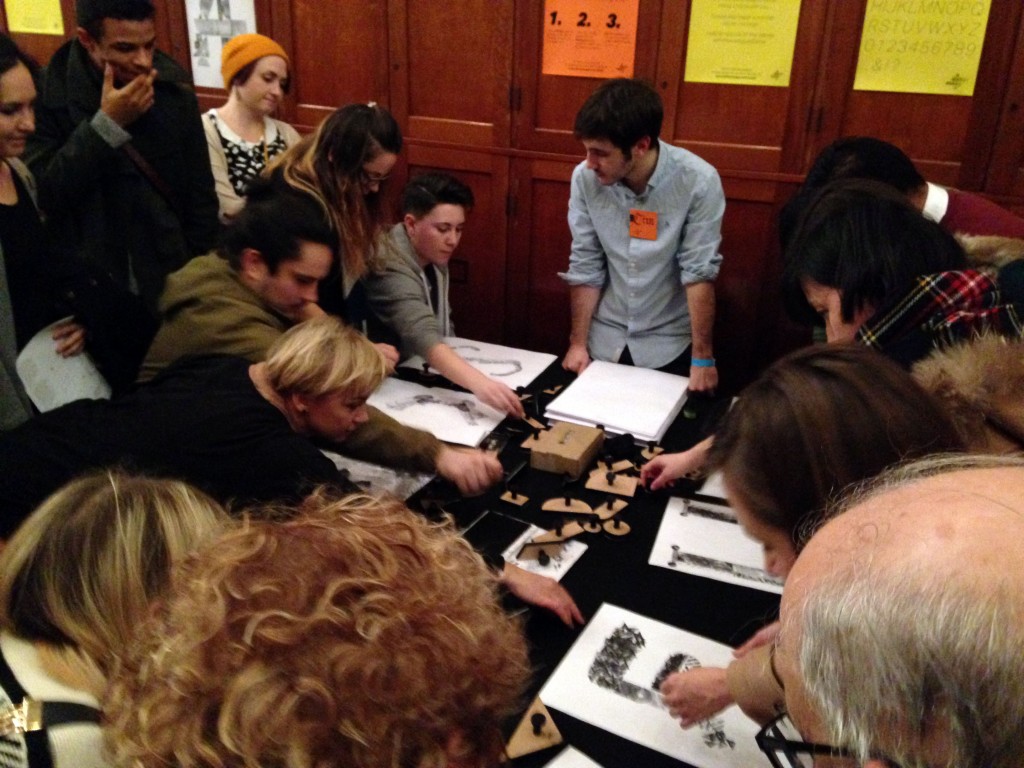 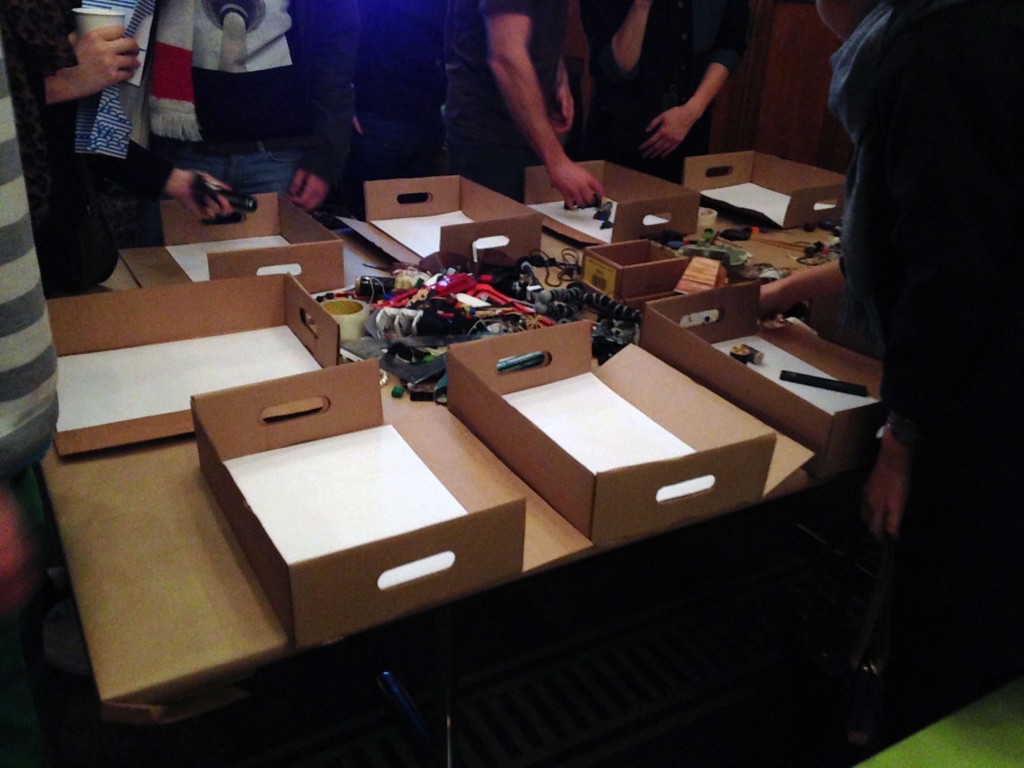 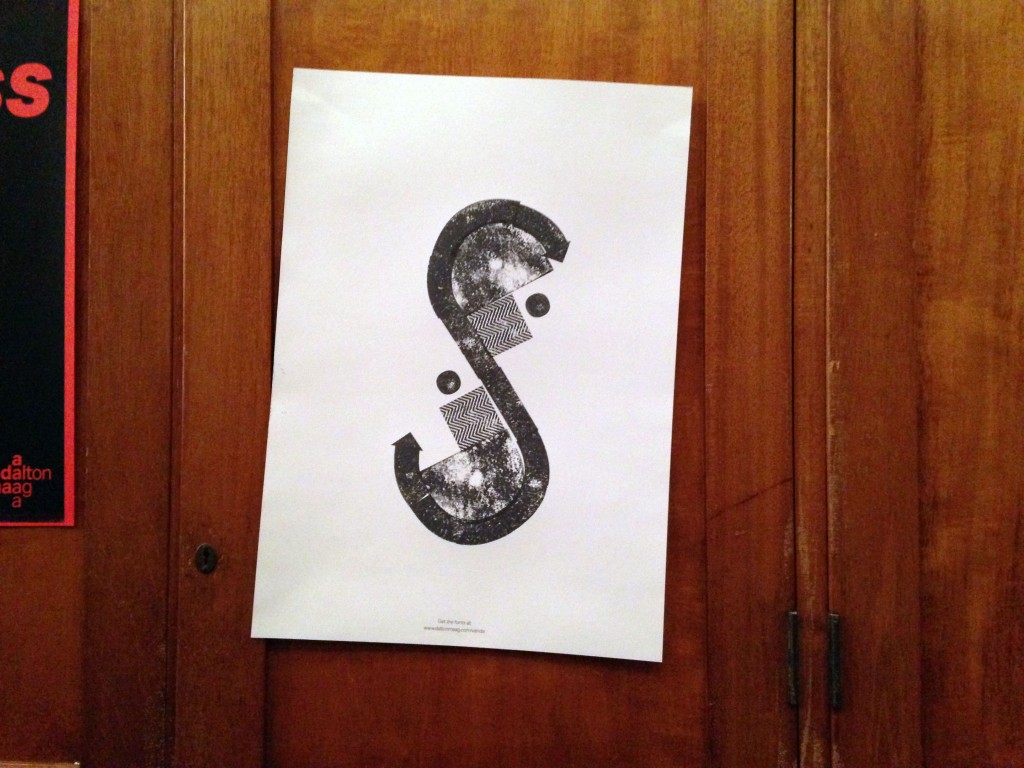 There wasn’t really any space for me to get involved (people were quite defensive over the stamps!) but from what I could see I thought some of them had turned out really well  – especially the S above!

At the end of the room there was a weird brown mass which people were creating clay letters to stick onto. I didn’t really get/stick around long enough to get what that was all about! (Anyone that can shed some light… please leave a comment!) 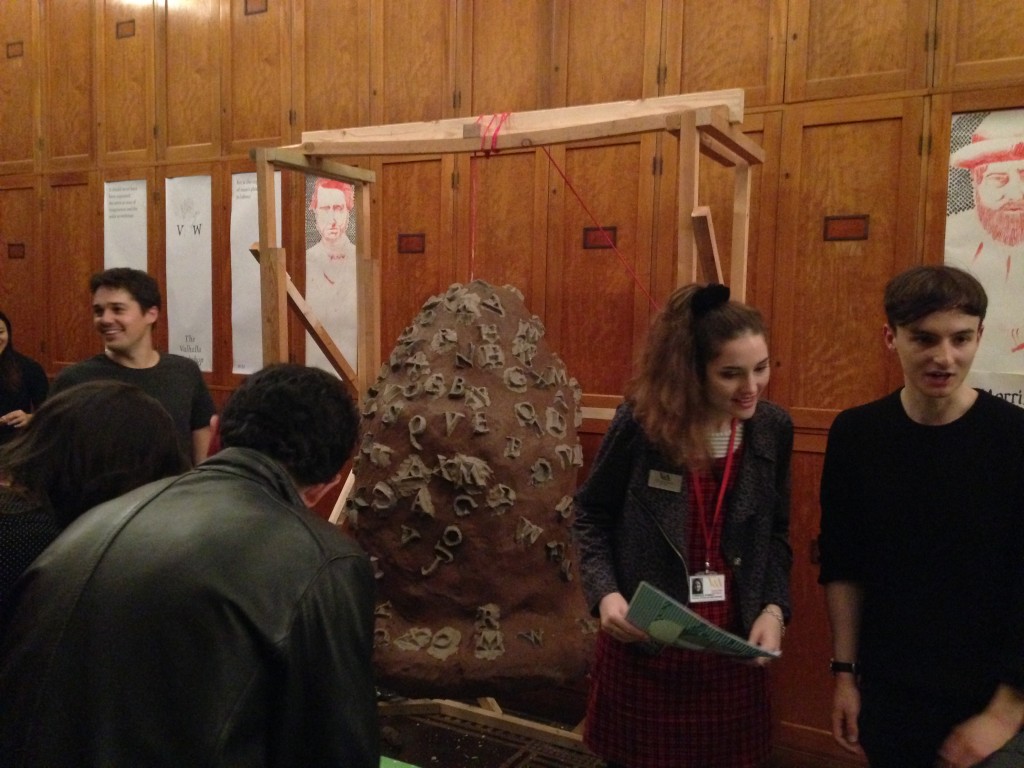 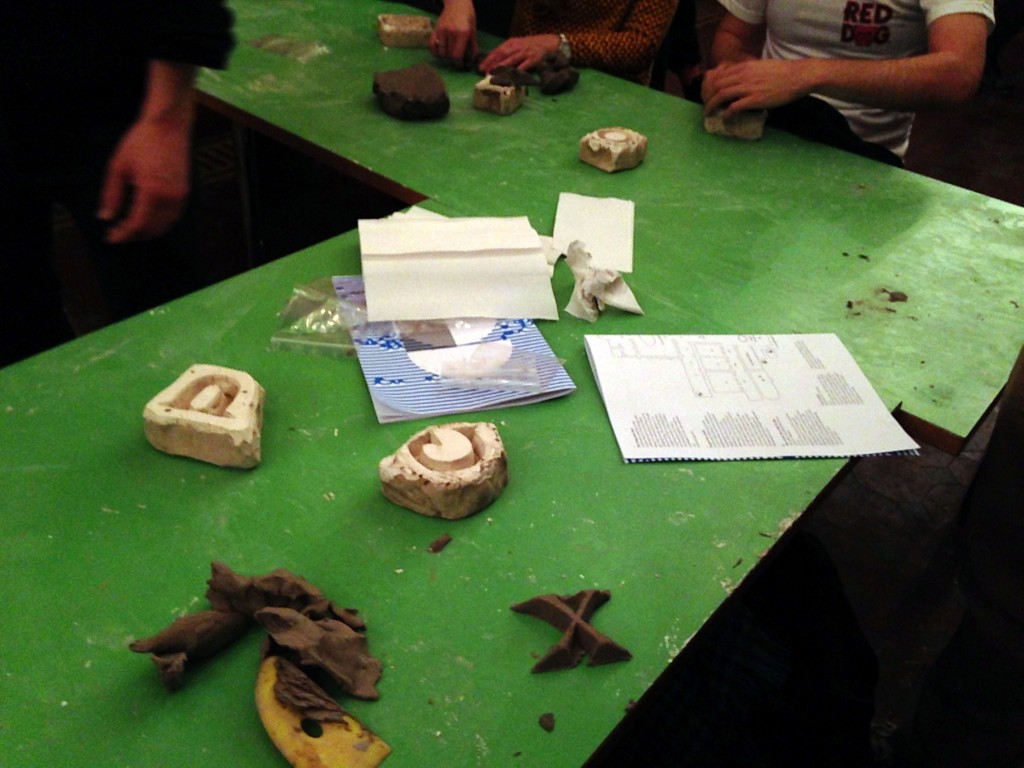 After that Jack & I found ourselves in a dark auditorium which had some really weird and random but all typography related gifs – from painting on roads to funny comments on paintings and post it notes: 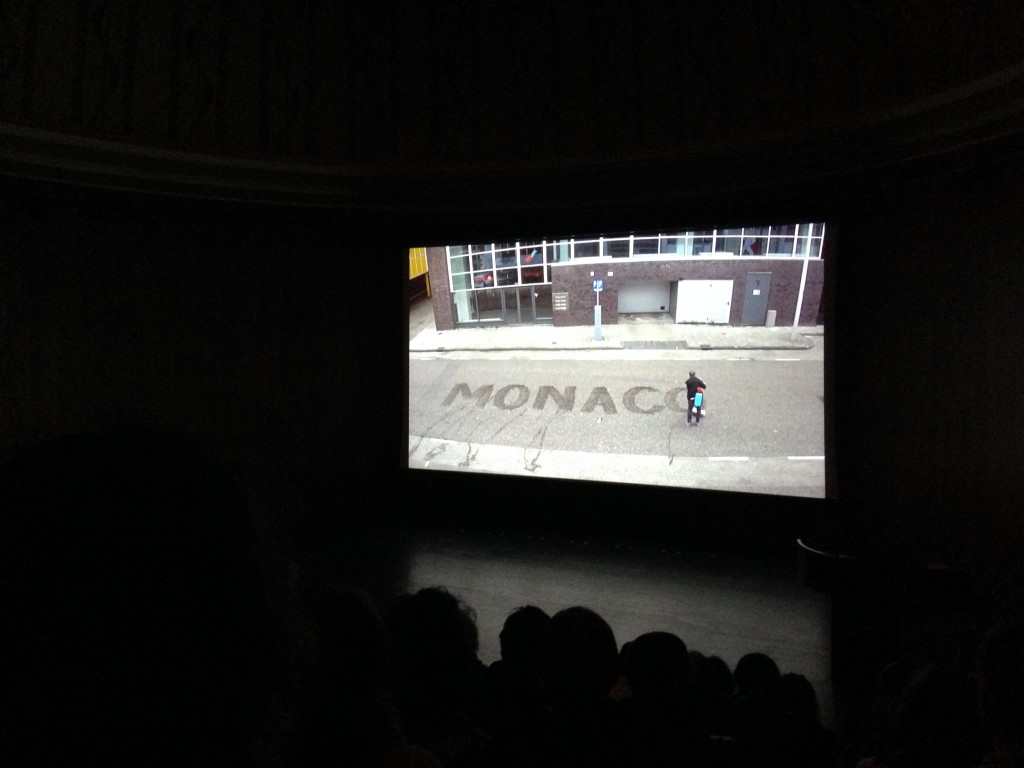 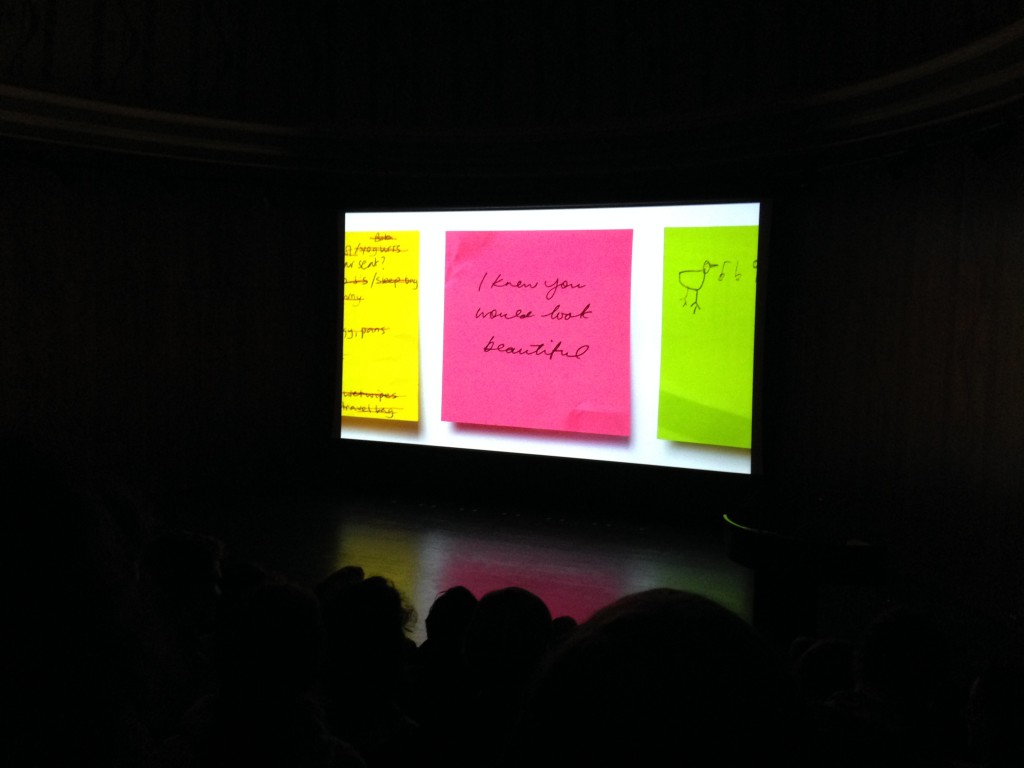 And then the lights came on and the gifs stopped – it was time for Vince Connare, the creator of Comic Sans, to talk. I didn’t realise the talk was due to happen but really glad that we stumbled across the talk as Vince explained the journey and background of the most famously hated font in the world: 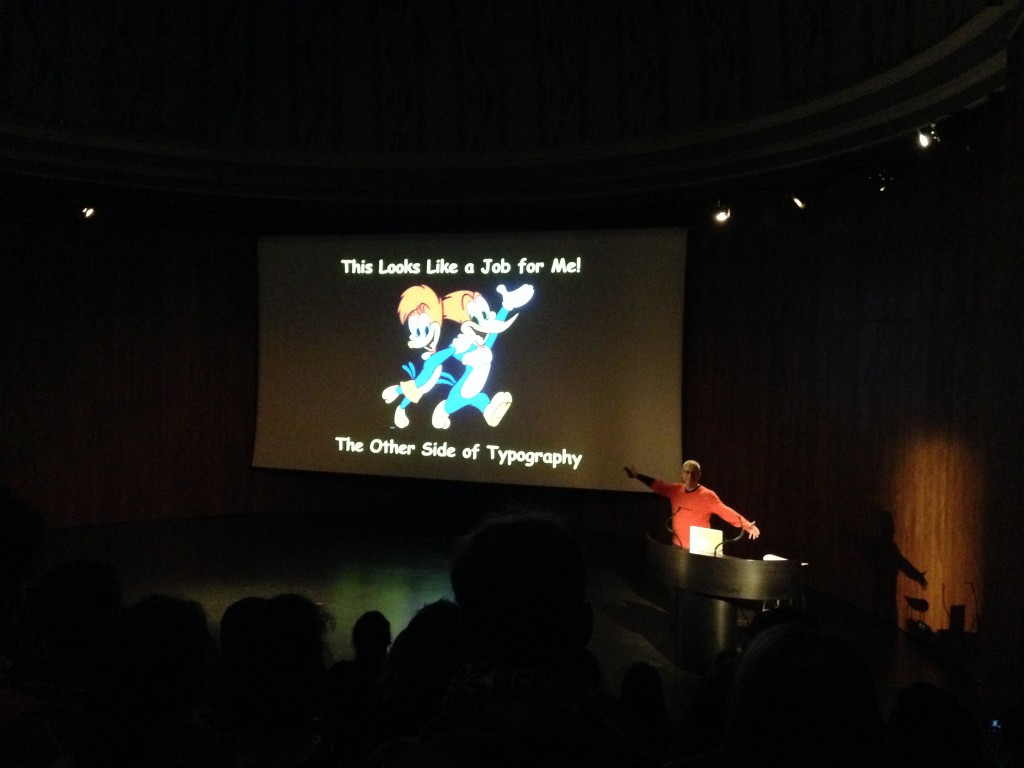 Vince gave us a bit of background about how and why Comic Sans was created. A painter and photography student with a fine art major, Vince was fascinated by the hand written popular calligraphic style of the time. For me, it was really important and interesting to learn this about Vince and I think it explains a lot. Vince talked us through a bit of his time at Microsoft (making glyphs) and the reason that pretty much everyone on the planet knows about Comic Sans. Windows 95 is mainly to blame, but the ‘misuse’ of a font inspired by handwritten comic book speech really catapulted Comic Sans into the spotlight. 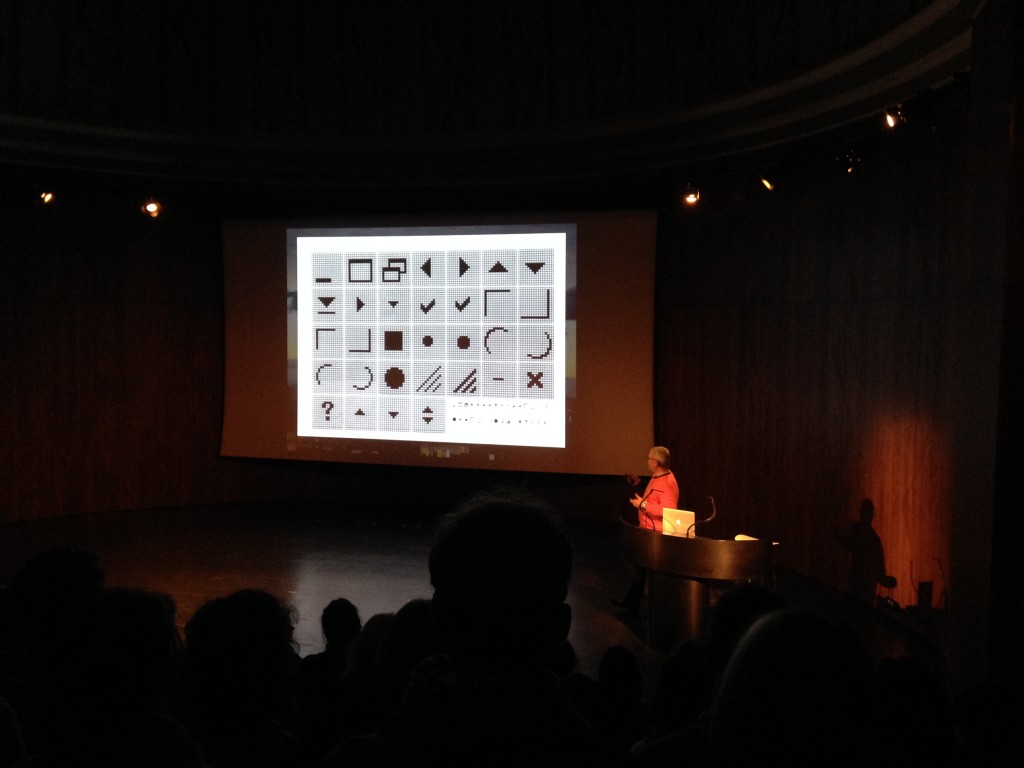 Vince explained that old age question of why Comic Sans was created. Who remembers the little Paper clip/Cat/Dog assistant in Microsoft Word? The earliest version of the assistant was called Microsoft Bob and Microsoft were looking to use Times New Roman for his dialogue bubbles. Vince said that the choice of font was too boring and formal for Bob, and so with inspiration from a Watchmen comic and his computer mouse he drew the letters for Comic Sans. (So essentially Comic Sans is a really rough version of Vince’s handwriting?) He said that his boss asked him to change the ‘wonky’ and ‘irregular’ letters but he didn’t because that’s what kept Comic Sans fun and human.

He shared with us some of the crazy things that have come out of Comic Sans – marriages, music videos and hate campaigns. When Pope Benedict resigned an online photo album was created with Comic Sans used for the captions. Eminem used Comic Sans in his ‘Without Me’ video. And recently there was the Comic Sans for Cancer exhibition which I attended earlier this year (and Vince shared my post on his Facebook!? HA) Sure, it is not the best font for everything but it has managed to raise almost £6,000 for Cancer so as Vince says… ‘It wasn’t a bad idea to make this font.’

The font, although not the best font in the world, was created for a purpose unlike many fonts nowadays that are purely about looking nice. Unfortunately Comic Sans just fell into the wrong hands – the fun-loving public! As I said, I am so glad that I stumbled across Vince’s talk because it was a fascinating story and he seems like a great guy. But I guess you have to have a good sense of humour to be the guy that created Comic Sans… ha

Thanks to the V&A for putting on the Font-focused Friday Late (I’ll be checking what’s on in the future) and to Soof for informing me about it all!

Get Hyped for Type