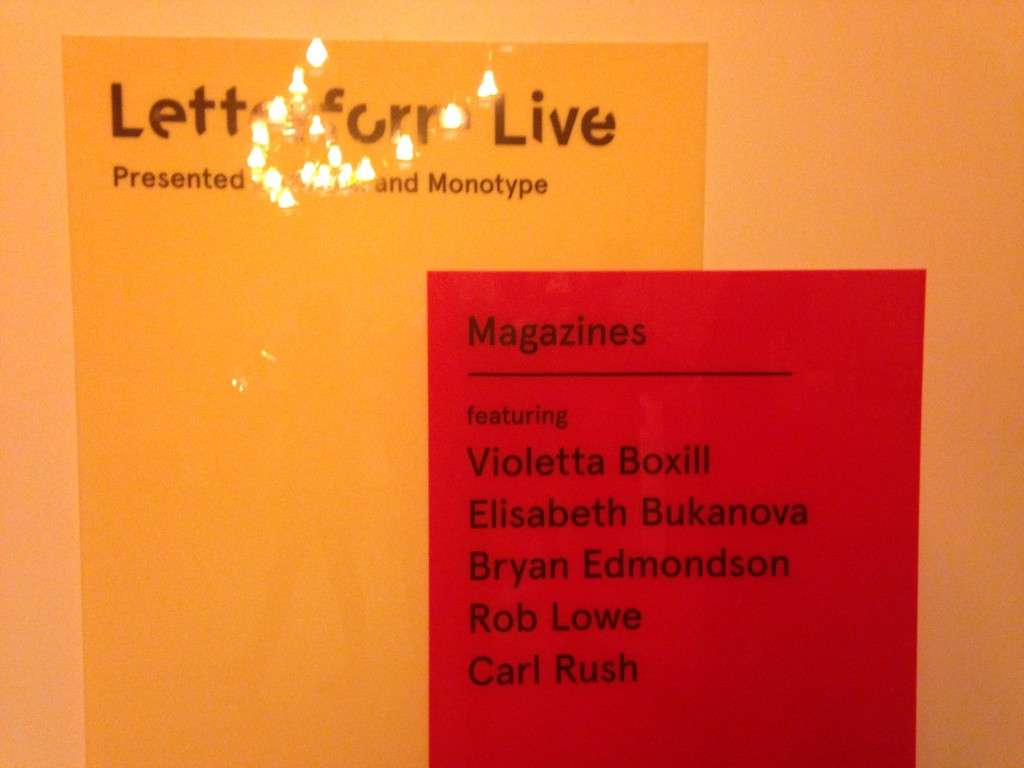 On Wednesday evening I met Sara, Ben, Sophie and Kevin (Sophie’s colleague) at the Protein Gallery in Shoreditch for a talk as part of the Grafik x Monotype series. The series has been going for a couple of weeks now but this talk, focusing on typography and Magazines was FREE! So it was no surprise that it was sold out (even though actually when everyone sat down half of the seats were empty, which was a shame). 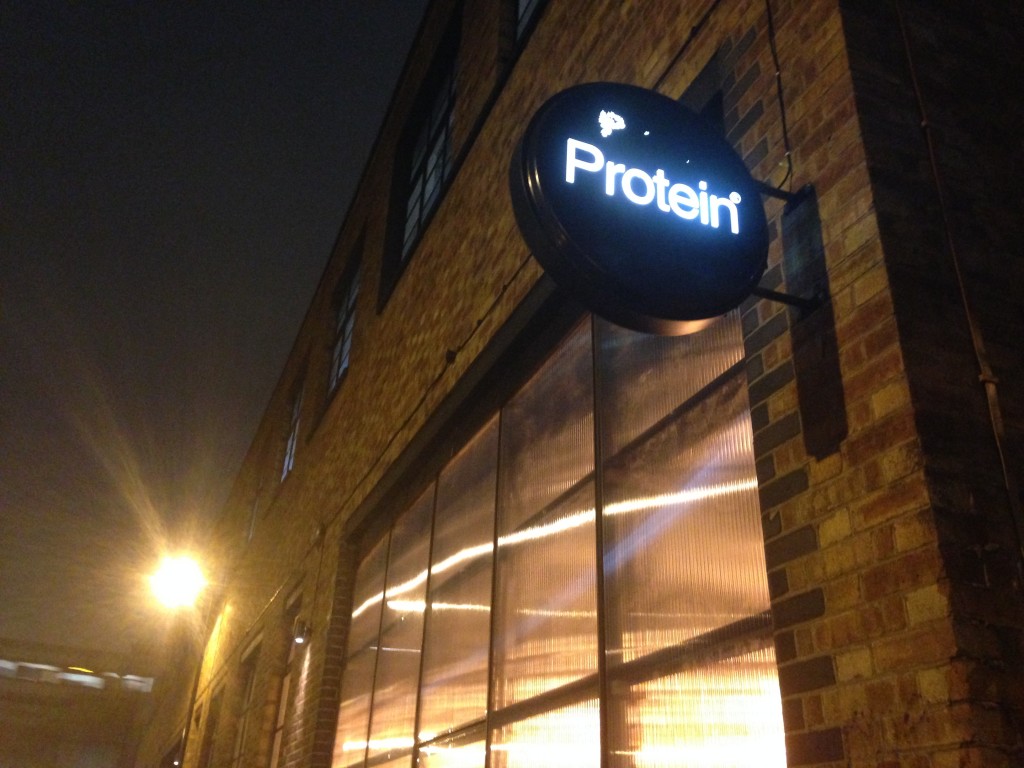 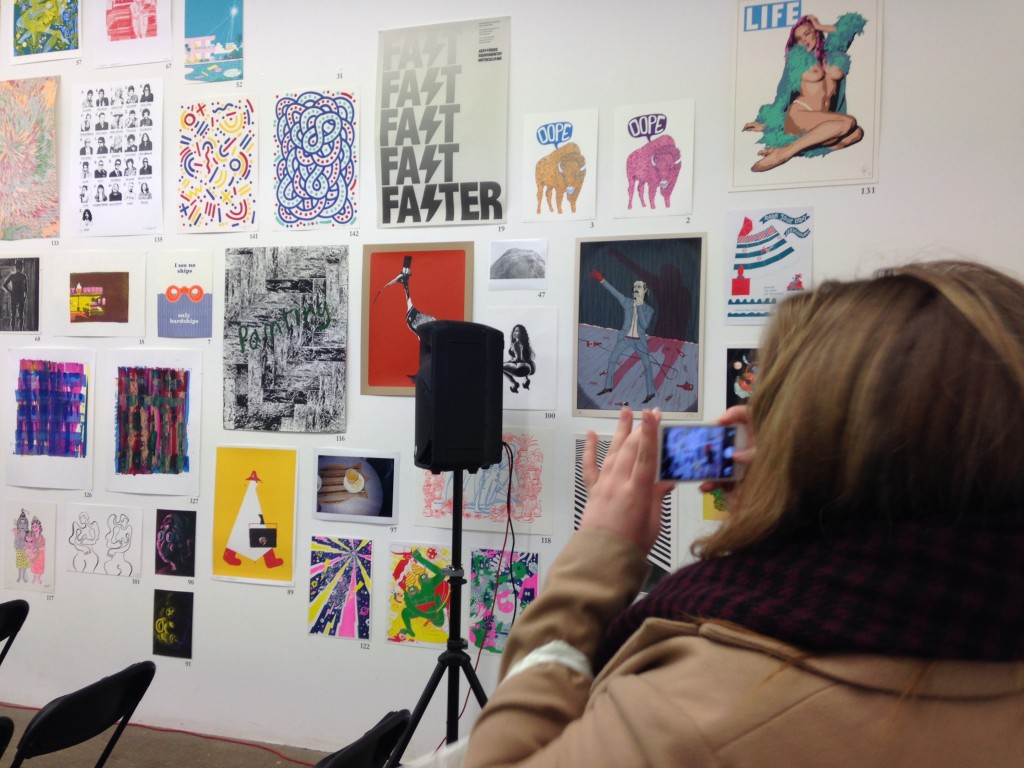 In the line up were 5 designers with different backgrounds and amazing portfolios of experience. Each were asked to choose their favourite letter from a typeface with relevance to magazines. Kicking off the evening was Bryan Edmonson from SEA who had chosen the lowercase ‘a’ of Futura extra bold. He shared an ‘interesting’ magazine cover using it which he said was ‘probably the shittest cover I’ve ever seen in my life’… 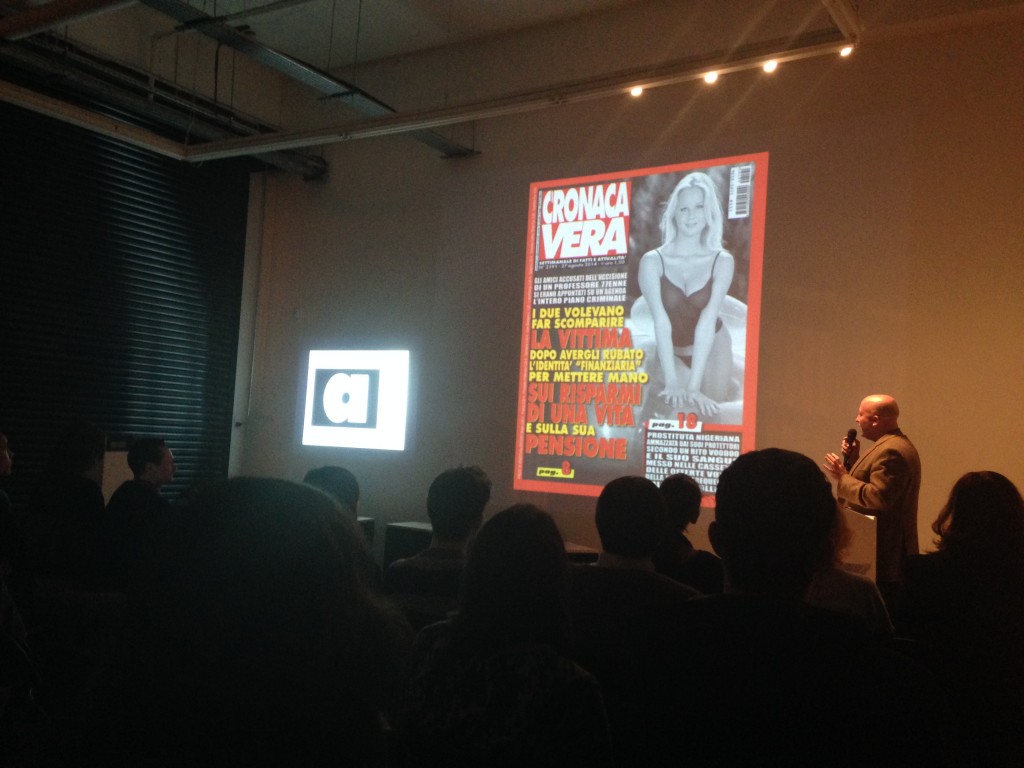 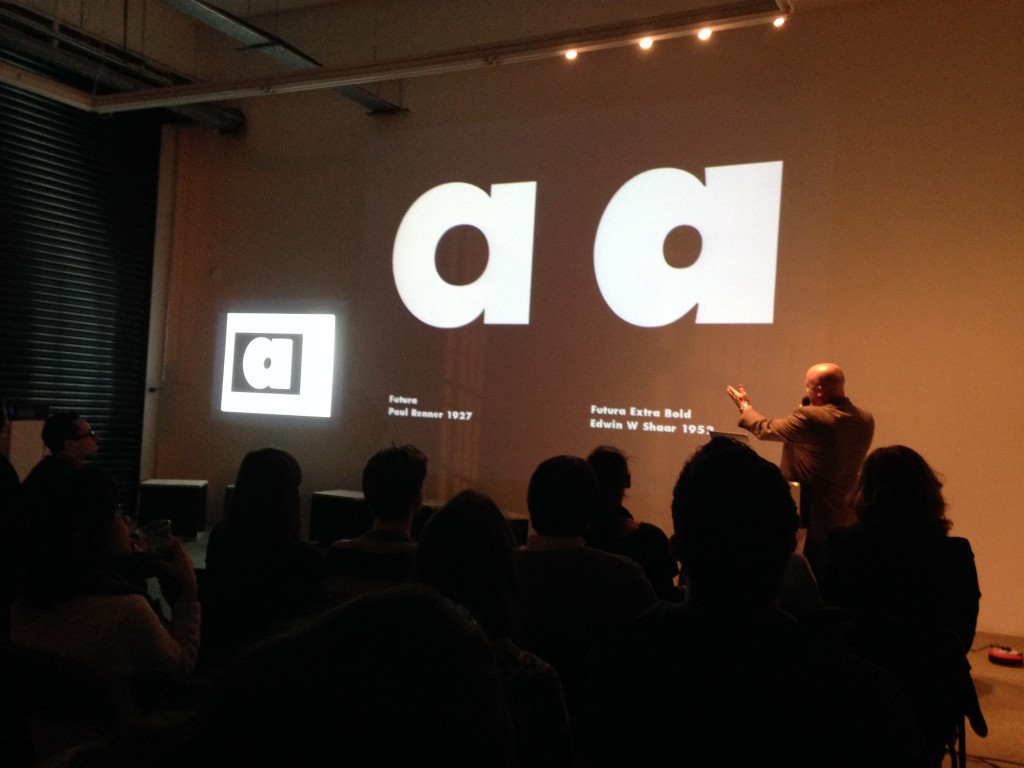 …and talked us through the curves and flares whilst likening them to Mr Men’s brogues – bet you’ve never noticed that before!? 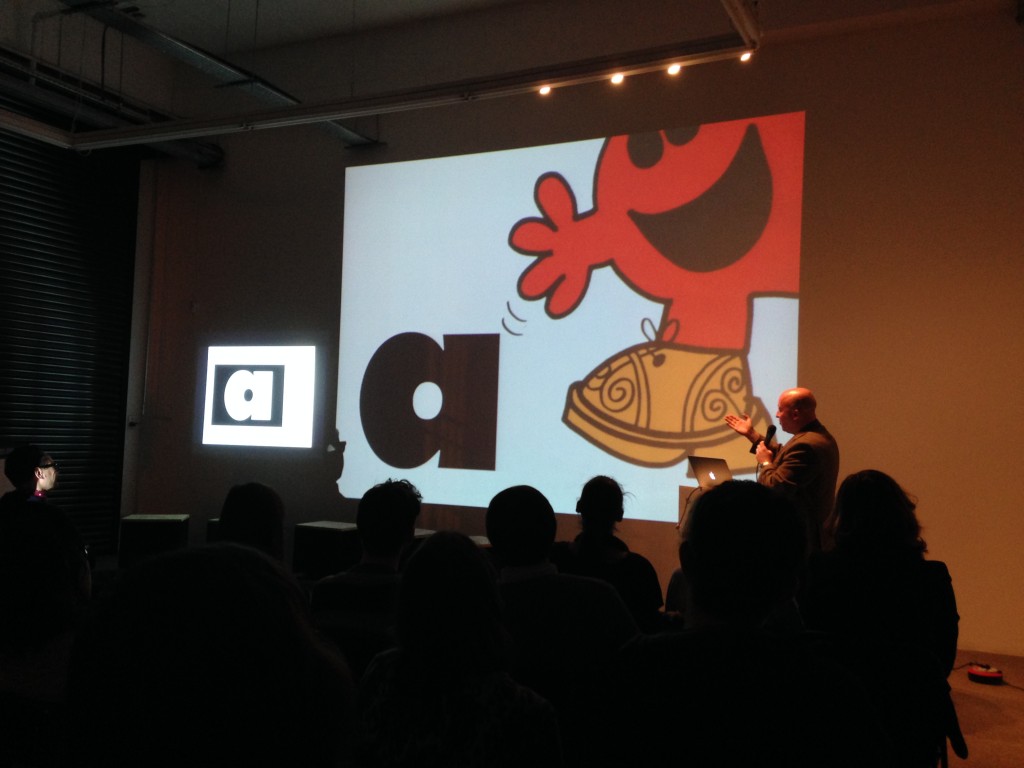 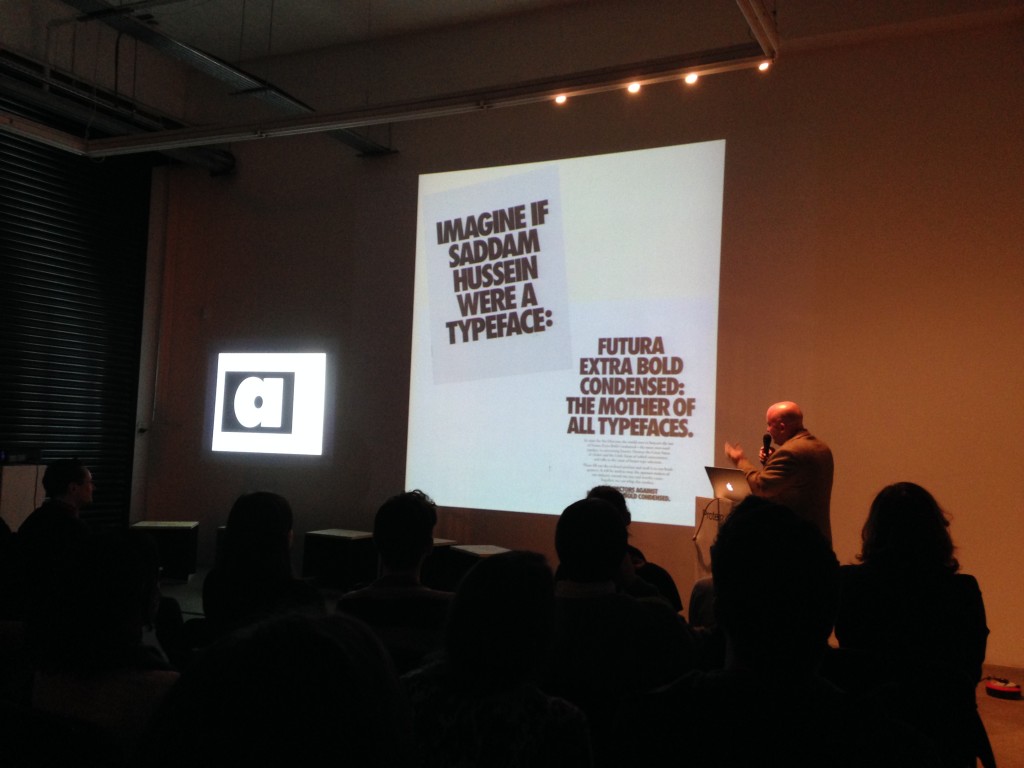 Bryan also talked about the ‘backlash’ against the condensed version of the font: ‘Imagine if Saddam Hussien were a font’ – a bit dramatic! I think that Futura extra bold is quite a hard font to use and get right but all of the Absolut vodka campaigns manage to make it look beautiful everytime.

Second on the microphone was Elisabeth Bukanova, a Fashion Designer turned Graphic Designer. She spoke about the use of typography in creative, abstract ways to make something visually pleasing and how she sees it as more of a canvas than a double page spread. 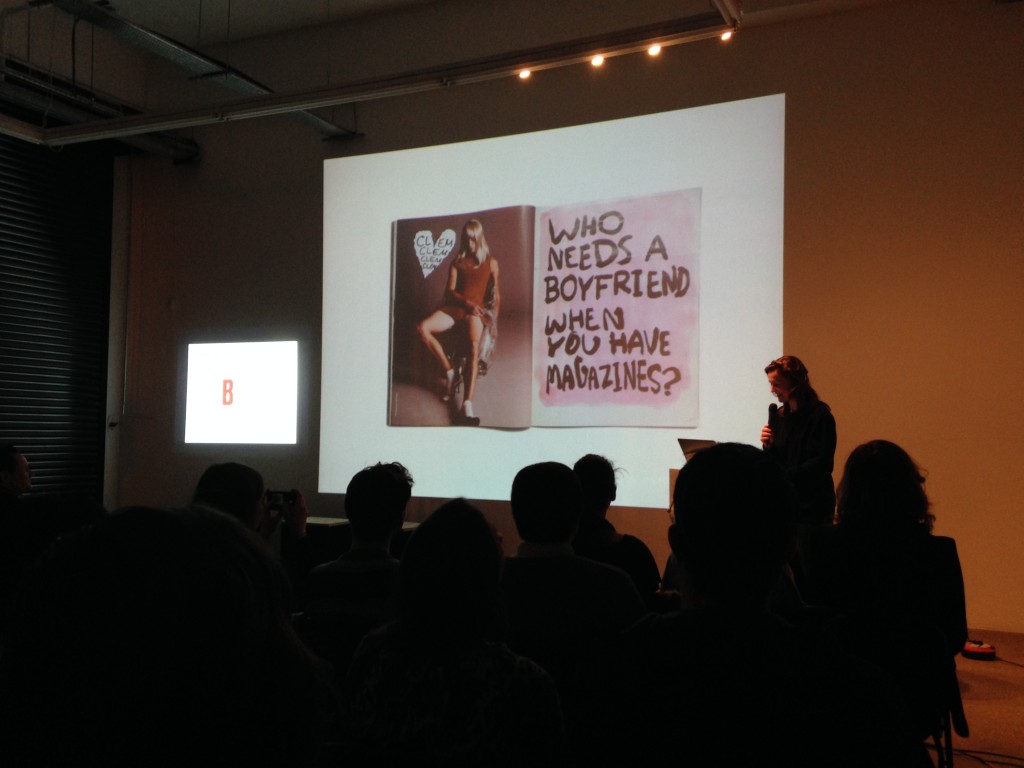 ‘We all have to conform in other areas of our lives so why not experiment in editorial?’ Elisabeth asked. She then explained a bit more about where her chosen letter, a red uppercase B, originated – briefly touching on the Dada movement: expression, immediate response and photo collaging. (I am a Dada fan too!) 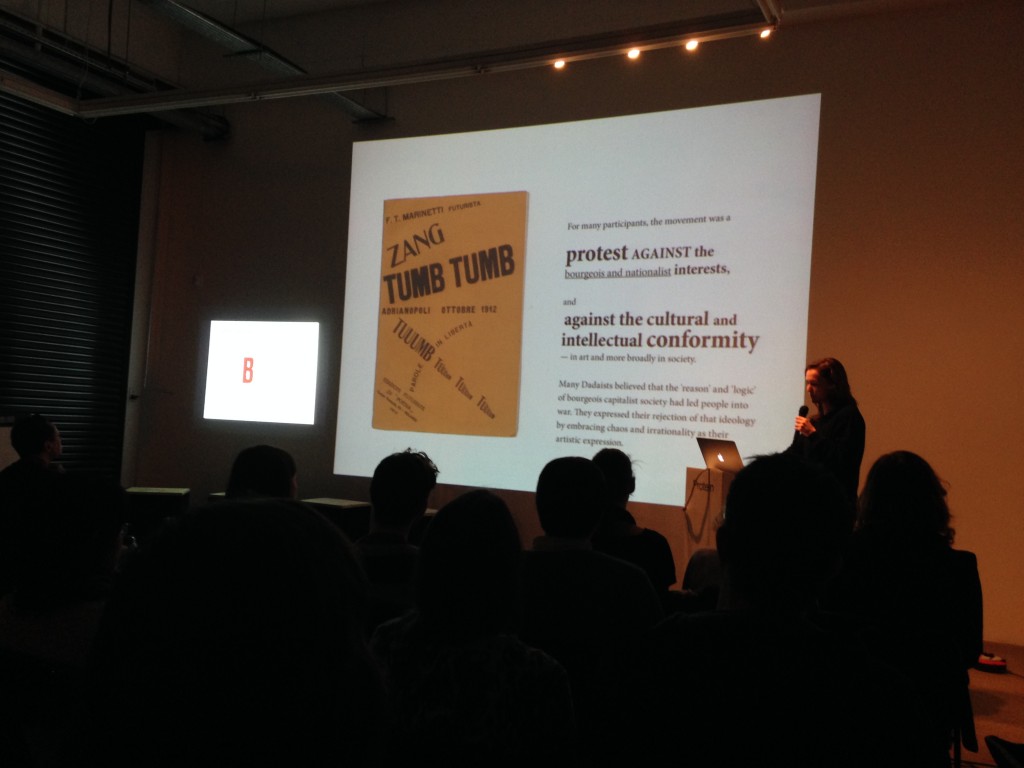 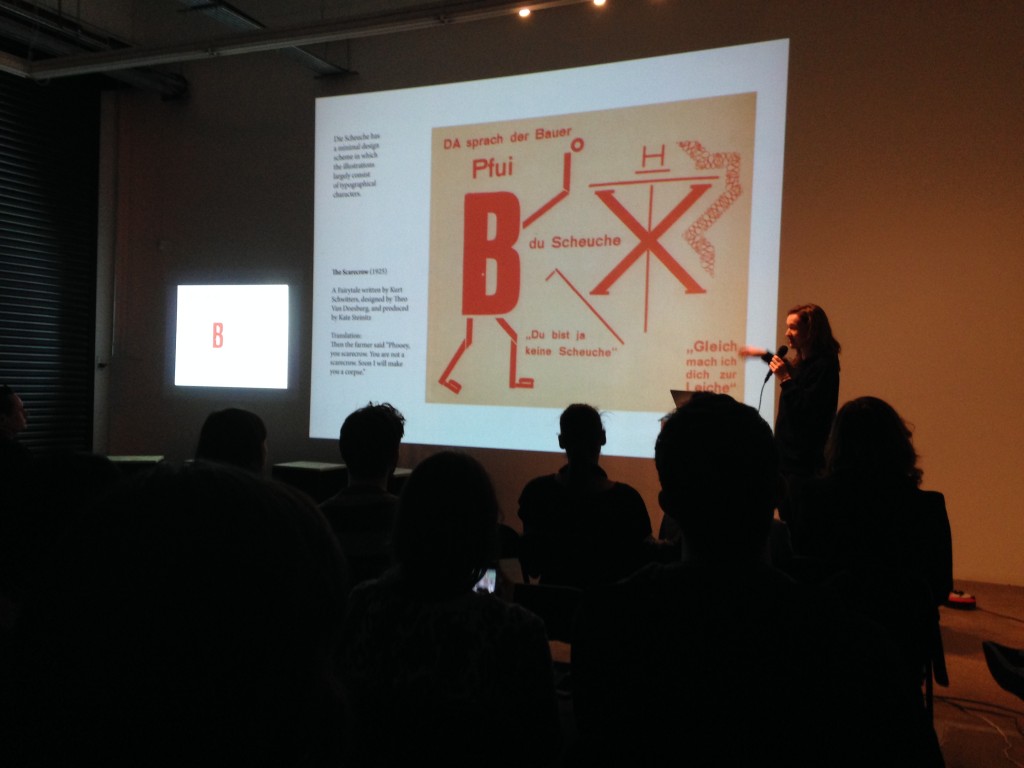 Her B is a farmer from a Kurt Schwitters story where a chicken is dressed as a scarecrow. That’s Dada for you!

The 3rd speaker was Carl Rush from Crush Creative who shared Oz Magazine, covering taboo and controversial subjects in Sydney during the 60s. The creators of Oz magazine were put on trial for publishing obscene material and corrupting the public, but it didn’t stop them from continuing to be tongue in cheek. 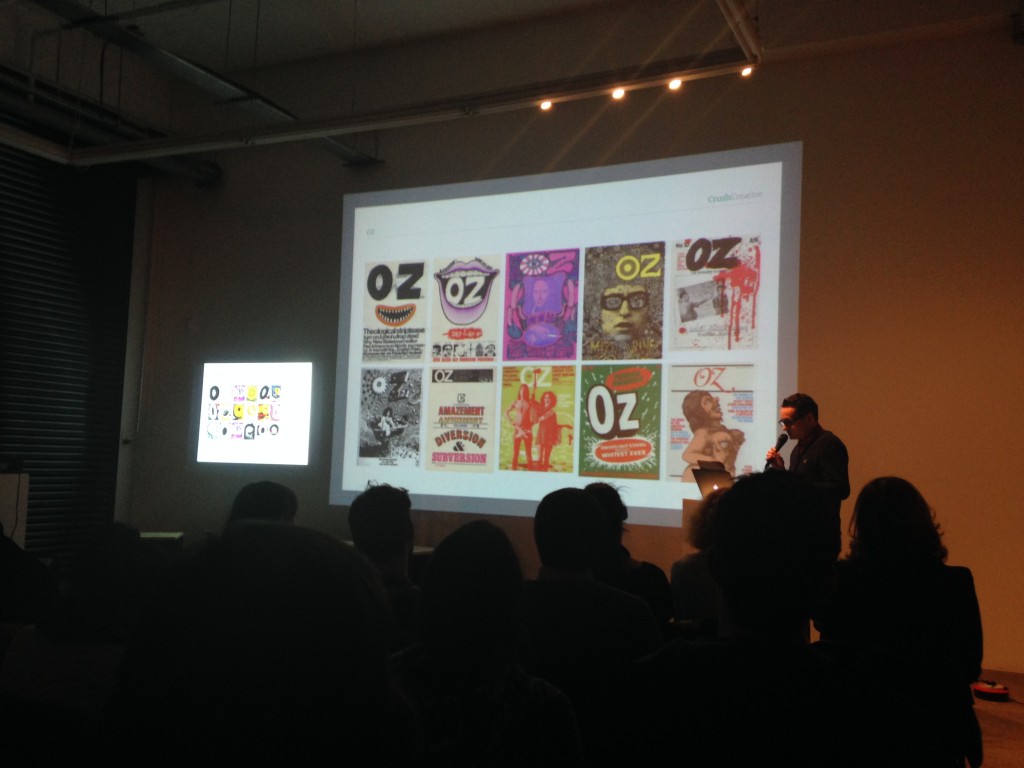 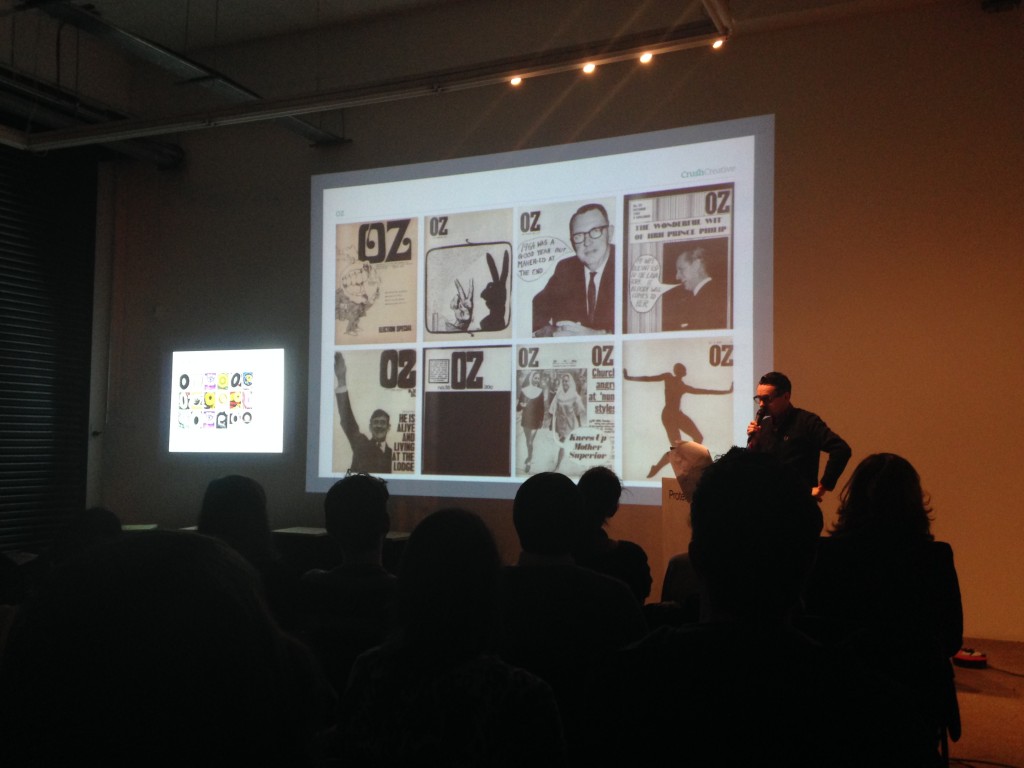 Every issue was completely different in design and content, making it more like a zine with quirky details and funny illustrations.

The penultimate speaker was Violetta Boxill who transported us to the world of fashion magazines with her choice of Vogue’s Didot & Bodoni mix, Didoni. A font that screams fashion, with a radical thick and thin structure much like the anorexic, skeletal form of the apparently ‘perfect’ model shape. 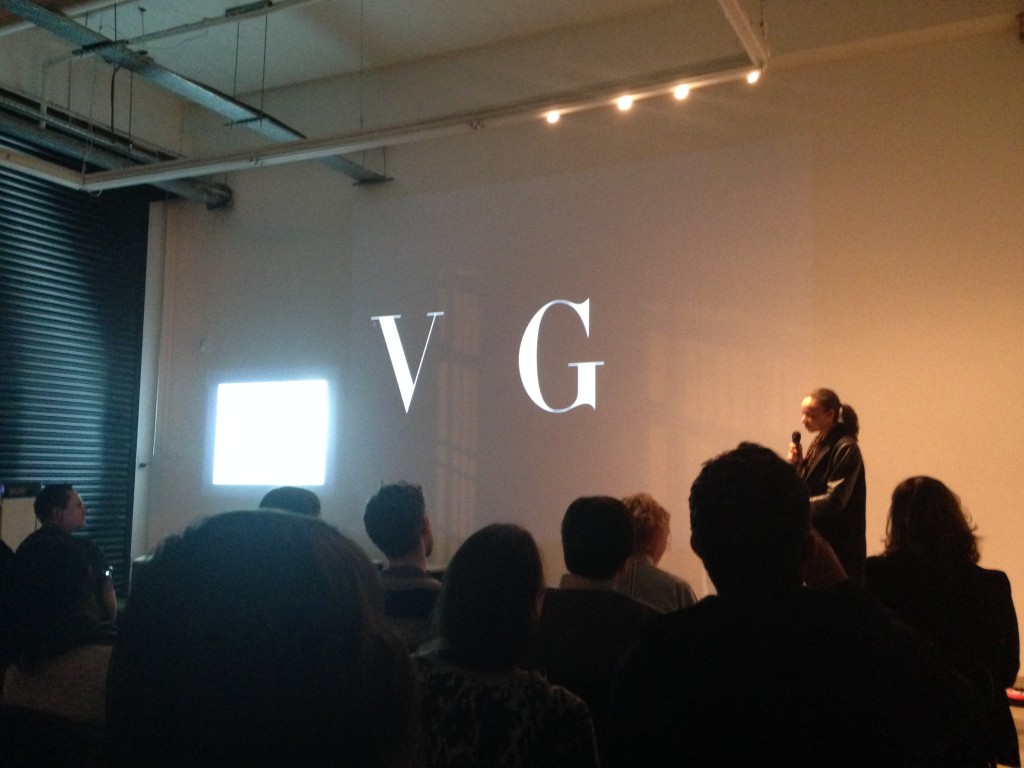 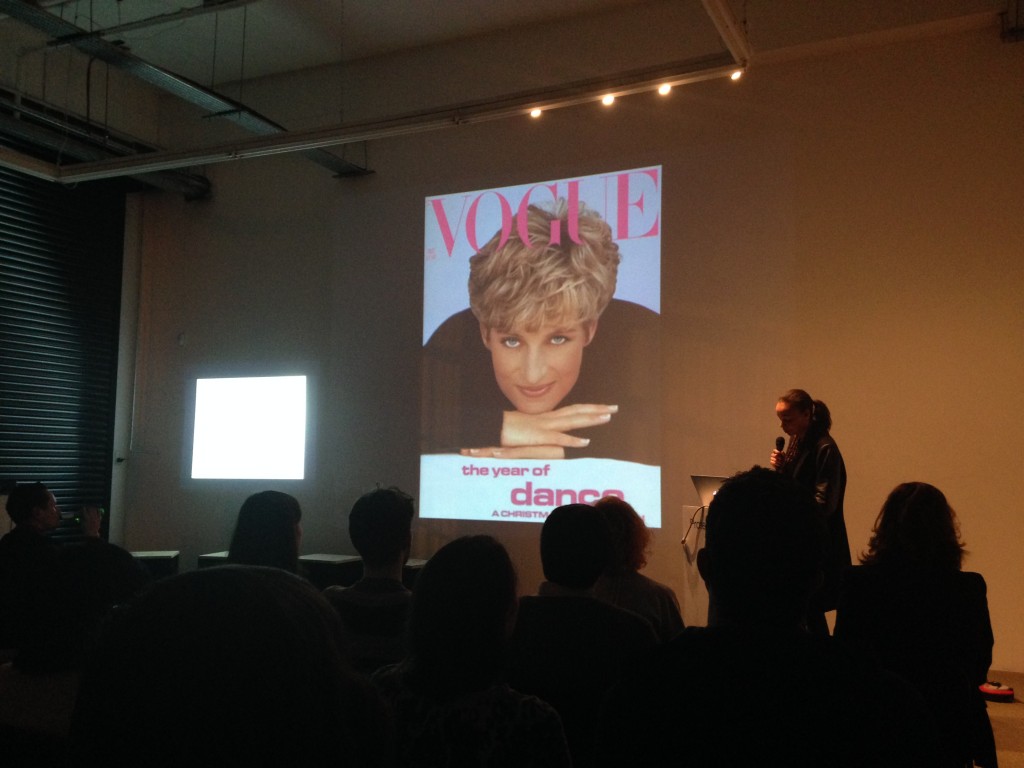 Violetta took us through a brief overview of her favourite Vogue covers and discussed the relationship between image, use of the logo header and headline quantity. Obviously from a design perspective a more minimal cover focusing on the composition of a great cover image is preferable but due to the need to grab attention amongst its competitors on a magazine shelf in shops, the covers have become increasingly cluttered. You might have noticed that sometimes some of the letters in the logo header ‘disappear’ in favour of the image, and Violetta had looked into it a little closer… 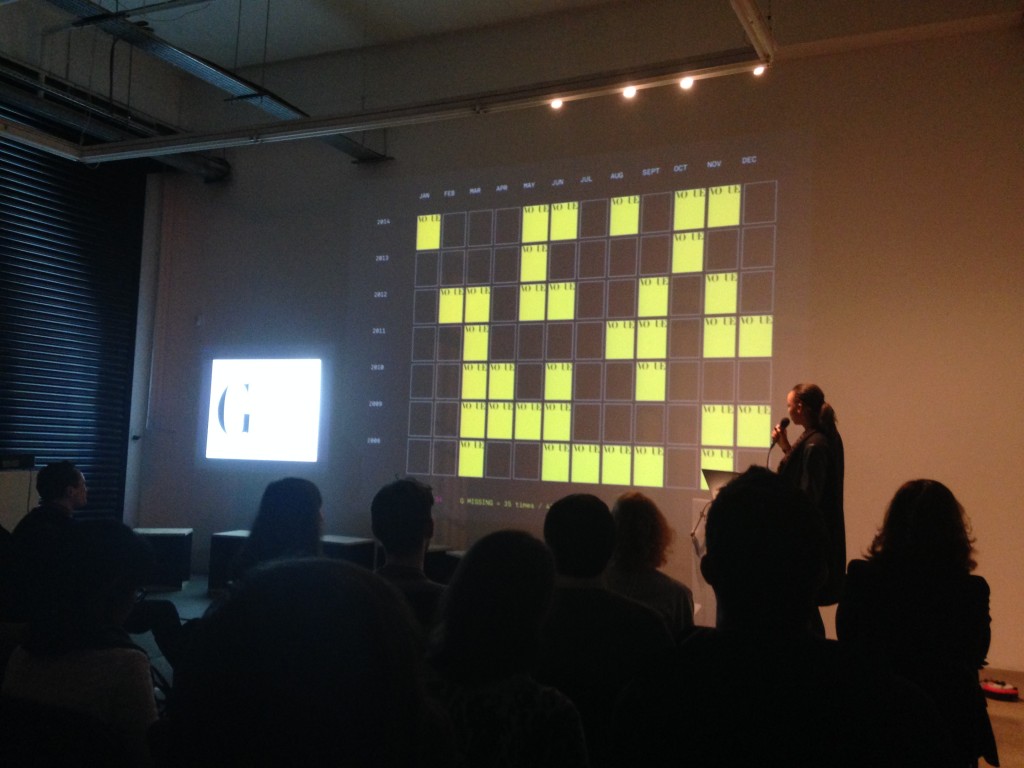 Which letter do you think disappeared from the logo most? The ‘over weight’, forgotten, middle child – the G. And one person was responsible for most of the disappearances of the G – who is queen of the G-spot? 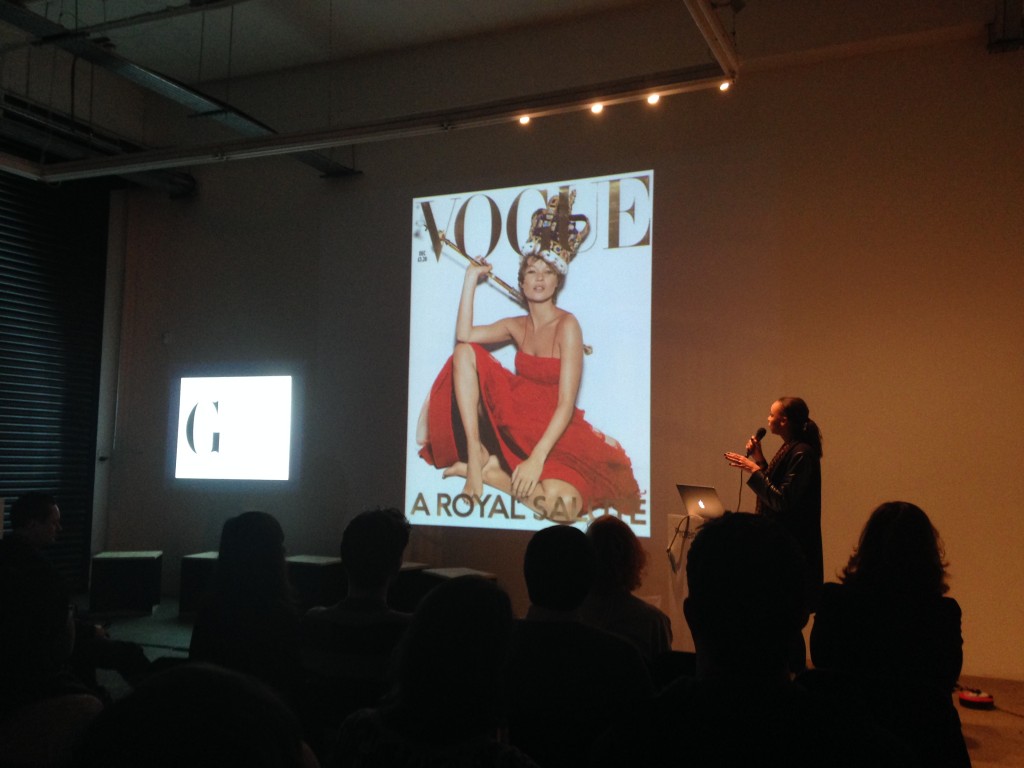 The final speaker of the evening was Rob Lowe with an angular uppercase A from Avant Garde Gothic. 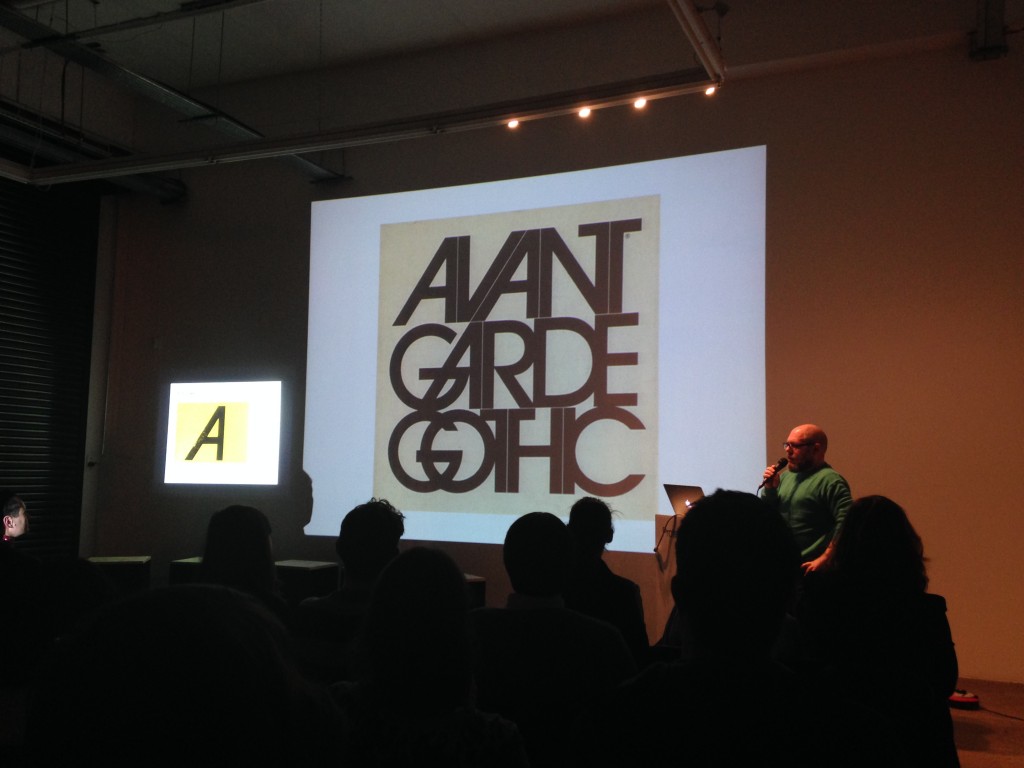 Designed by legend Herb Lubalin, the mixture of dramatic angles and curves makes all designers fall in love with it despite it being quite difficult to use. It might have something to do with the fact that it has several interchangeable letters and ligatures, meaning that kerning this bad boy is an art form and sometimes it can go ‘wrong’, like on this Tachen cover for the Stanley Kubrick Archives: 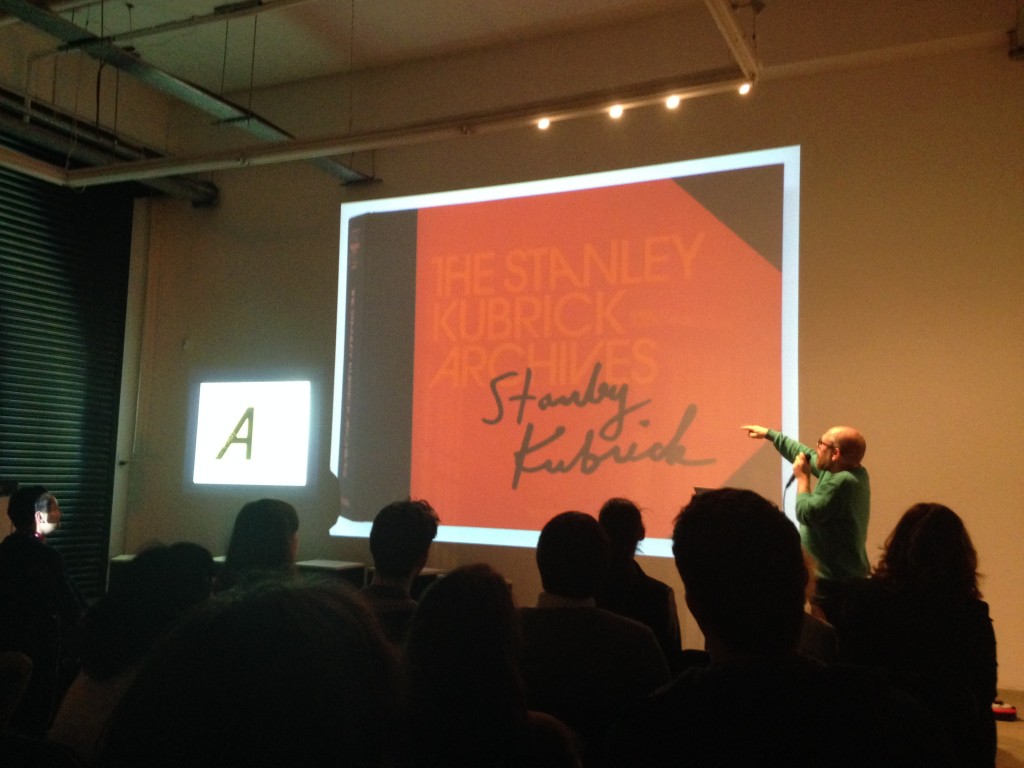 WHY would you use that A next to an N in Stanley? (Every designer will use it differently though I guess.) It does look amazing though when used ‘correctly’ – look at these ligatures: 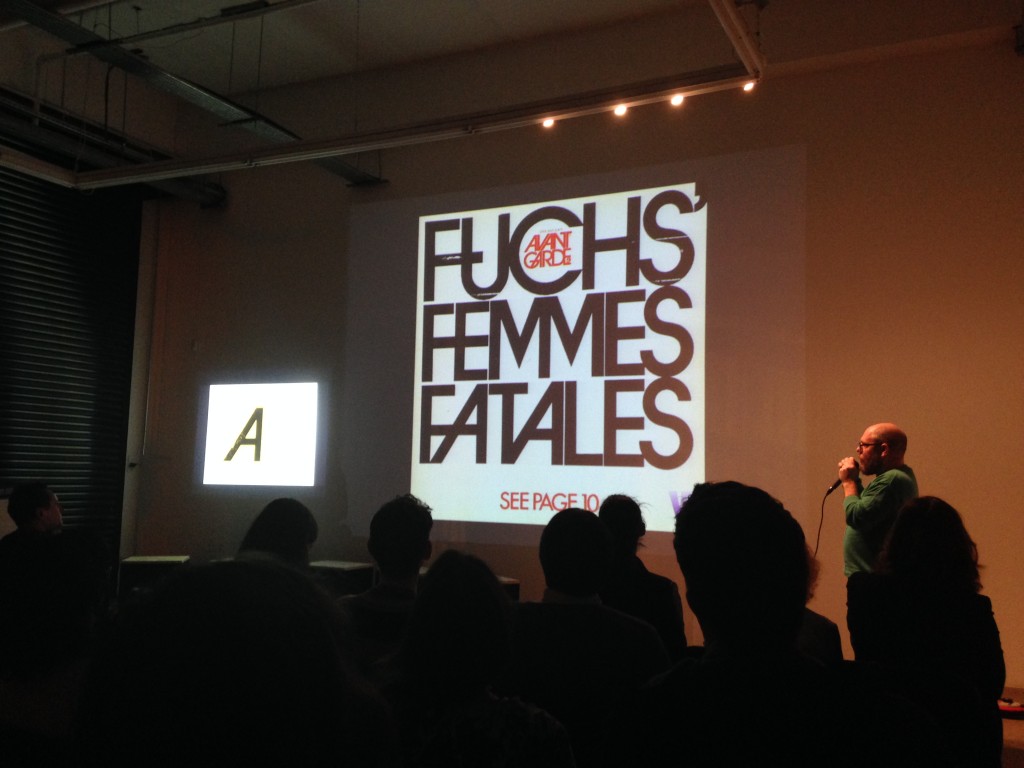 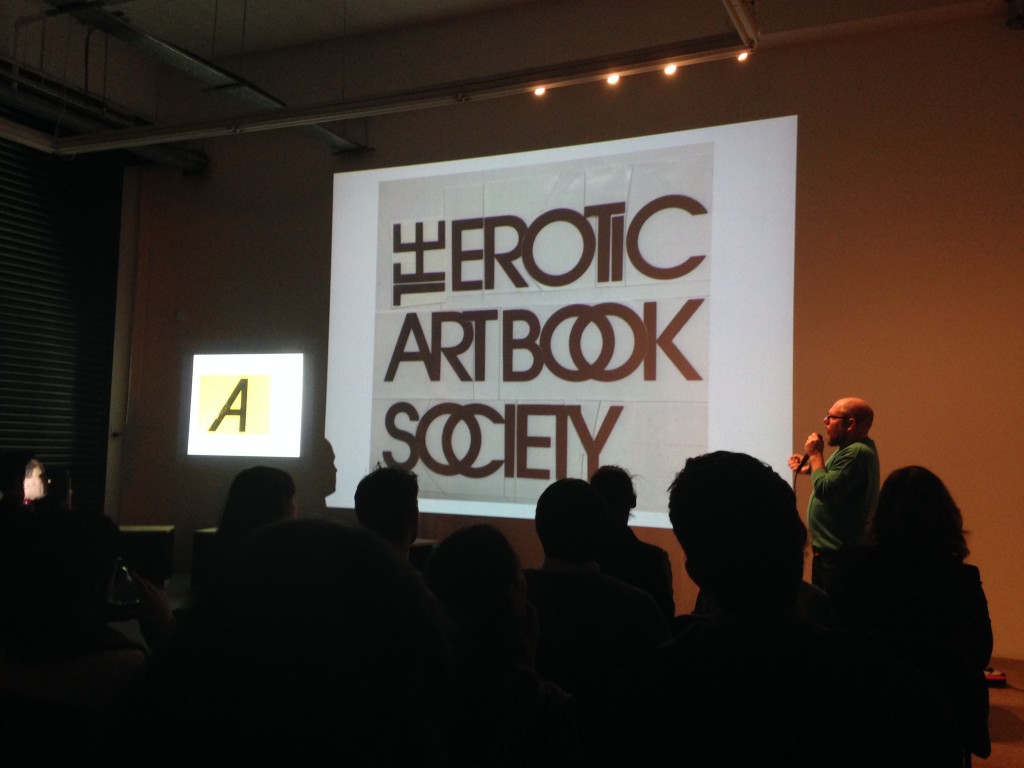 It is quite hard to judge though because we are so used to kerning type on-screen, when really the best way to experiment with Avant Garde is by good old fashioned paste up! 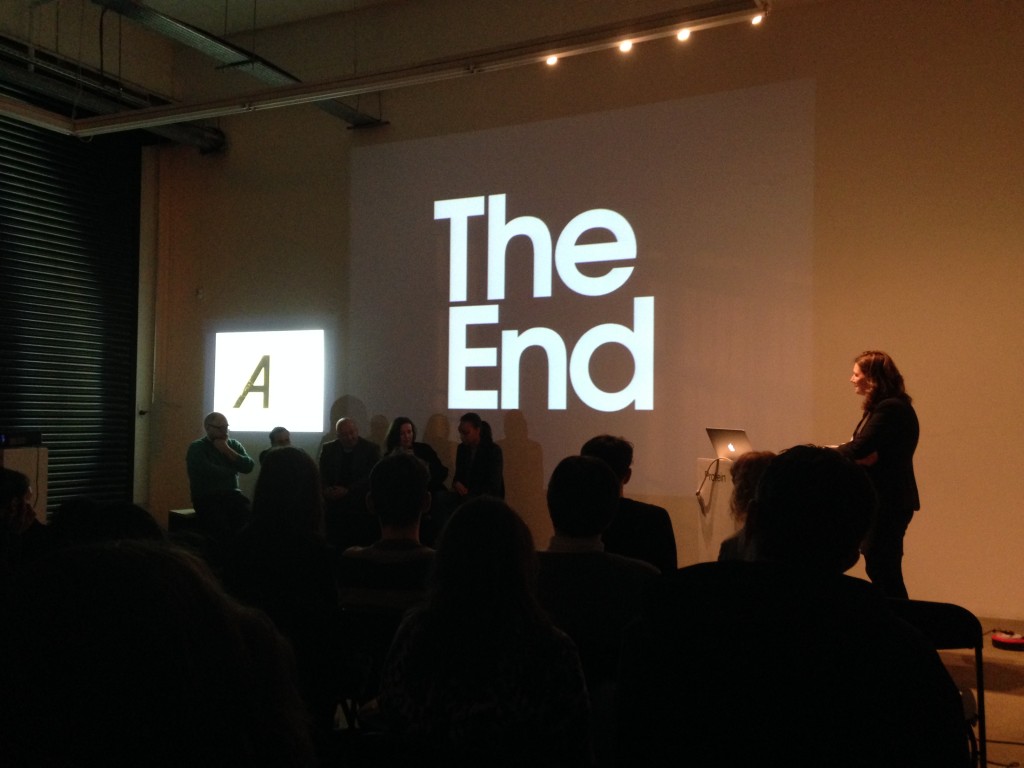 And to finish Letterform Live there was a Q&A with all of the speakers with questions about the future of magazines and typography adapting between print and screen. I really enjoyed the talk and after having a few stressful days at work it was so nice to just sit and listen to passionate designers and be inspired. After listening to the speakers achievements it definitely got me thinking about what I want to achieve in my career.

Thanks to Grafik Magazine, Monotype and all of the speakers – I still can’t really believe the talk was free!

What is your favourite font/letter? I find it too hard to narrow it down to just one but I do appreciate a bit of Didot and Futura so I was quite happy. I think all of the events are finished for the moment but I recommend keeping an eye on the Grafik magazine twitter and eventbrite page in the future!