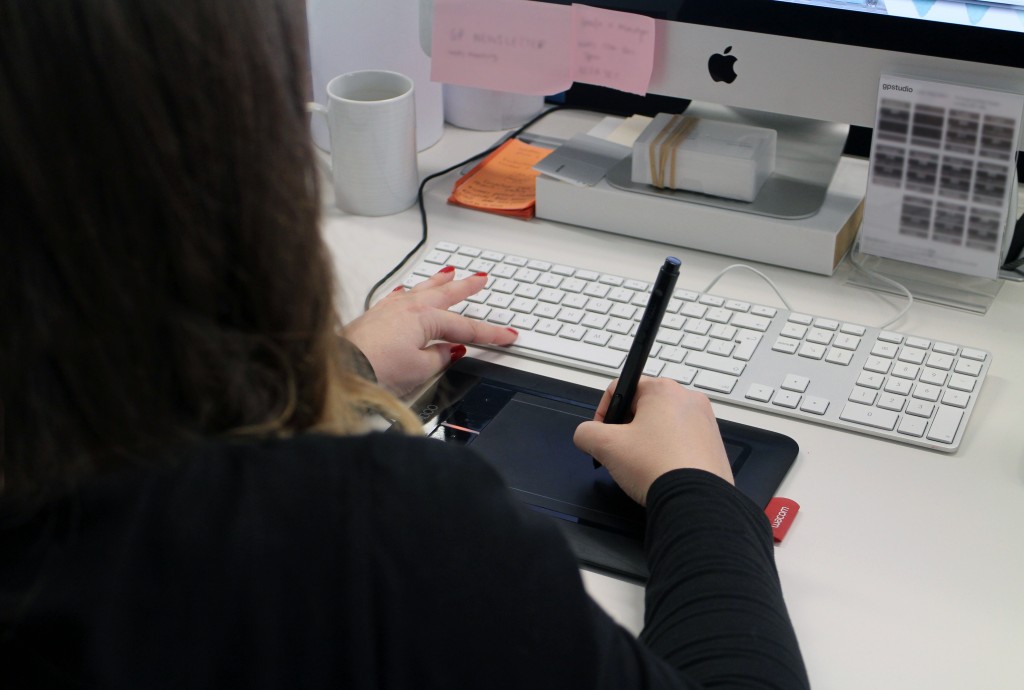 For the past 4 years I have been designing using a trackpad on my MacBook Pro. It took me a while to get used to controlling my digital world via a rectangle but I got there in the end. Prior to that I had always used a computer mouse with a wire and a scrolly button, oh, and don’t forget the mouse mat! 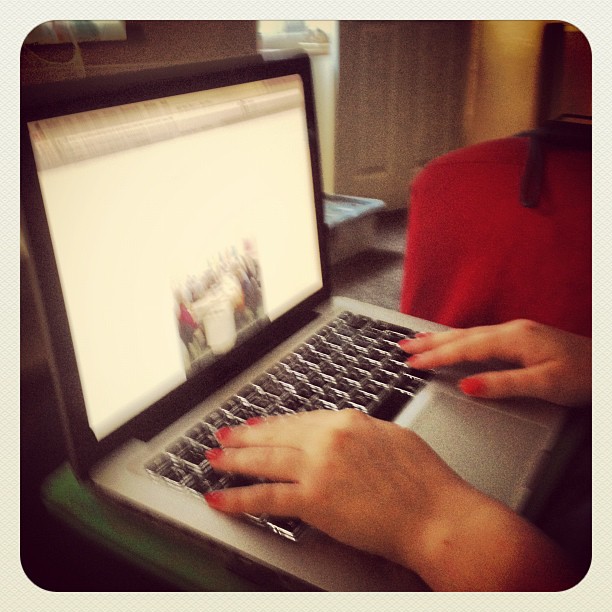 Where am I going with this? Well when I started as an intern at gpstudio in February last year I reverted back to the trusty old mouse. I don’t remember it being that hard to get used to (although I did keep over-shooting the mouse off the mat which was a bit annoying) but Jo (Senior Designer) was a whizz on the tablet.

I had never tried using a tablet before, but the idea of it didn’t really appeal to me as I didn’t think I had very good eye-hand co-ordination and I wasn’t very confident in my sketching ability(which I assumed was linked to using one). I remember at University a few of the other students discussing which was the best one to ask their parents for for Christmas but otherwise, the only time I had seen one was watching ‘real designers’ in interviews online… and Jo using one at work, obviously. 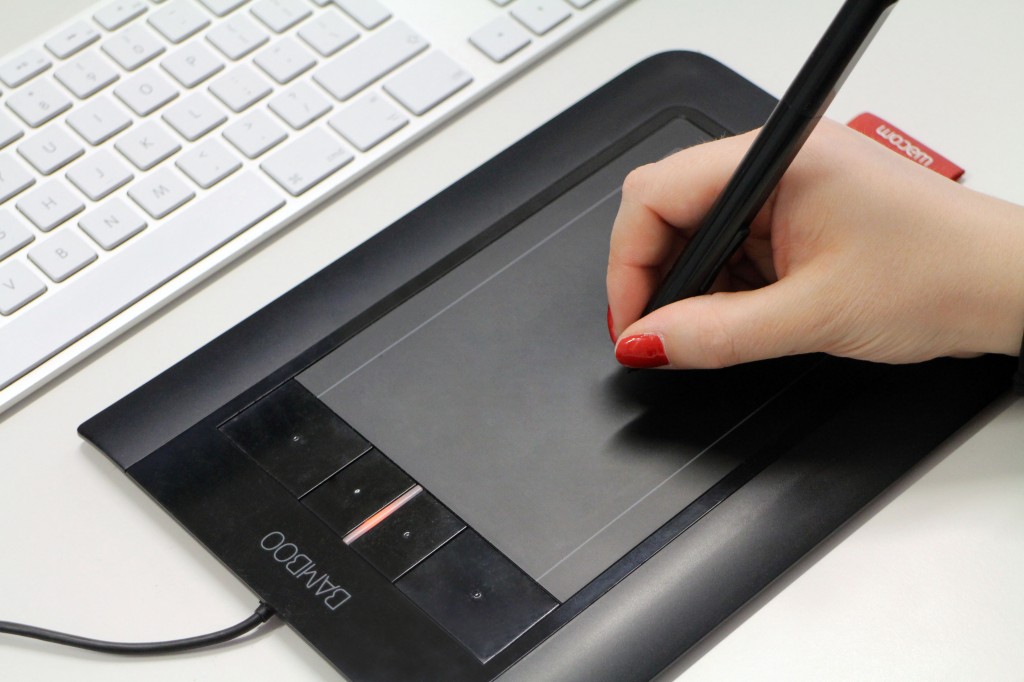 So when Jo got a bigger tablet, she asked me if I wanted to have a go with hers to how I got on with it. I took the challenge and she took my mouse away so I had no option but to get on with it.

That was (as you can see from my tweet) the 7th of November. So 2 months on, have I been converted to the tablet or have I given up and admitted defeat? 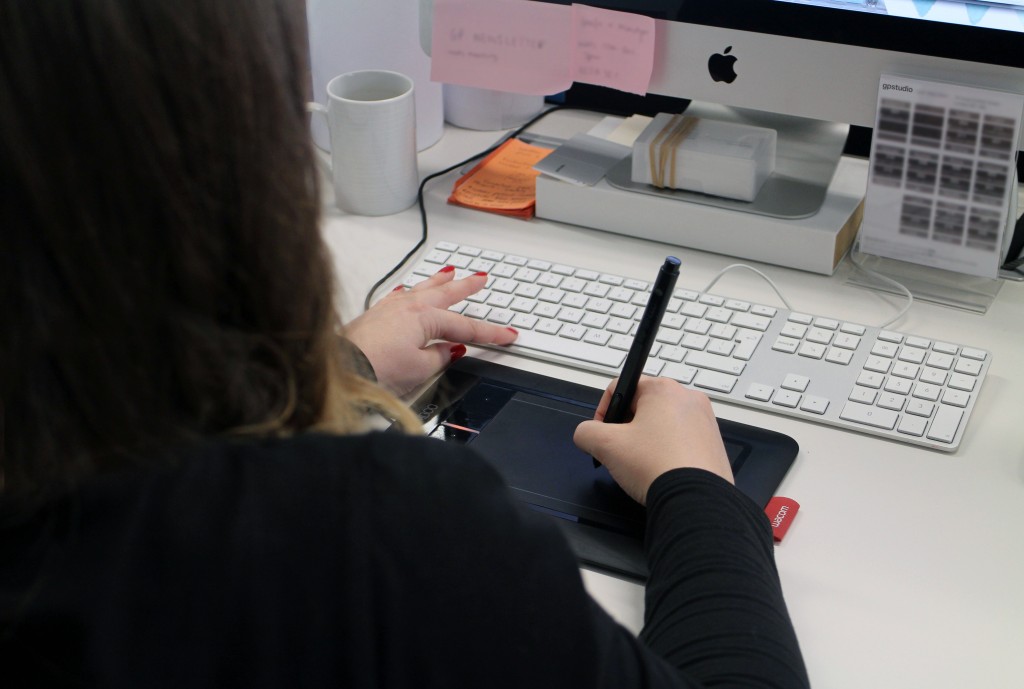 Well, I haven’t conquered it completely, but I am on team tablet! So just incase you wondered, the tablet I have been borrowing is a Wacom Bamboo tablet which isn’t available to buy anymore but I think this is the updated version.

I found using a tablet hard to get used to at first but I think the best way to learn was to throw myself in at the deep end without any choice. I think it probably took me a week to get properly used to it because I was afraid of going off the tablet when using anything at the top of the screen (so closing tabs or programmes etc). Once I had got used to the boundaries I felt more confident with my control, although I do still have moments when I lose my cursor on screen! I have got the speed of the cursor set on quite slow at the moment, but maybe I will be able to speed it up a bit in the next couple of months if I’m feeling brave ha

The hardest part of using a tablet for me (which I am still struggling with) is accuracy and clicking. As I feared, my hand-to-eye co ordination is a bit rusty. Let’s say I wanted to open a file – I have to double click on it. So I have to double click on exactly the same spot twice – I actually find that quite hard to do. There have been times where I’ve clicked and nothing has happened, so I click again which is too many times so it goes to change the name of the file. I have even cleared the file name too somehow(don’t ask me how!). There have been times when I have moved the file somewhere – flicked it into a different folder, onto my desktop or in a really weird place on finder. It just takes a slight movement because these tablets pick things up so easily! Which leads me on to say that you might have noticed there are buttons on one side of the tablet which I have turned off to lessen the chance of me pressing something I didn’t mean to. There is also a button on the pen itself which I also have turned off, but Natalie prefers to have it on – I think it controls scrolling or maybe it’s her right click, I’m not sure on that one.

The programme that I have experienced the most difference in using a tablet and pen with is (and this is quite obvious) Photoshop. When you’re cloning, painting, masking a mask or a lasso selection using a tablet is just like drawing with a pen and paper. You have a lot more control over your wrist movements so brush strokes are smoother and finer. The same goes for within Illustrator – a tablet allows you a lot more control over creating smoother curves on vectors and lines.

From using the tablet I think I have become a lot faster as well as combining use of the keyboard, which I have been learning a few shortcuts for from Jo and Natalie. I probably don’t push myself to learn and use the shortcuts as much as I could, but sometimes I revert back to the long way of doing things if I am under pressure (if someone is watching over my shoulder usually). I’m obviously still nowhere near as fast as Jo or Natalie, but (and I hope they agree) I feel like using the tablet has helped improve the pace of my work. I did find it a bit weird putting down the pen every time that I need to type on the keyboard to begin with, but now I seem to do it automatically and it feels a lot more natural. I haven’t managed to lose my pen yet either, so I think I’m doing quite well!

So I can honestly say that I don’t miss my mouse. In fact I find it weird when using other people’s computers without a pen now. And one thing I definitely do not miss about using a mouse is the clicking, which can be really annoying in a quiet studio/office!

Oh and one last positive (just incase I haven’t already sold you on tablets): watching non-tablet users trying to use your tablet can be quite entertaining – a little something to brighten your day and make you feel smug.

Thank you to Jo for letting me borrow her tablet (and also taking the photos!) and maybe one day I will have my own…

I hope this is of interest/helps you if you have been curious or considering getting a tablet. Or maybe you’re a tablet master? If so, please leave any tips or tricks for me in the comments 🙂

And you can quote me on this...