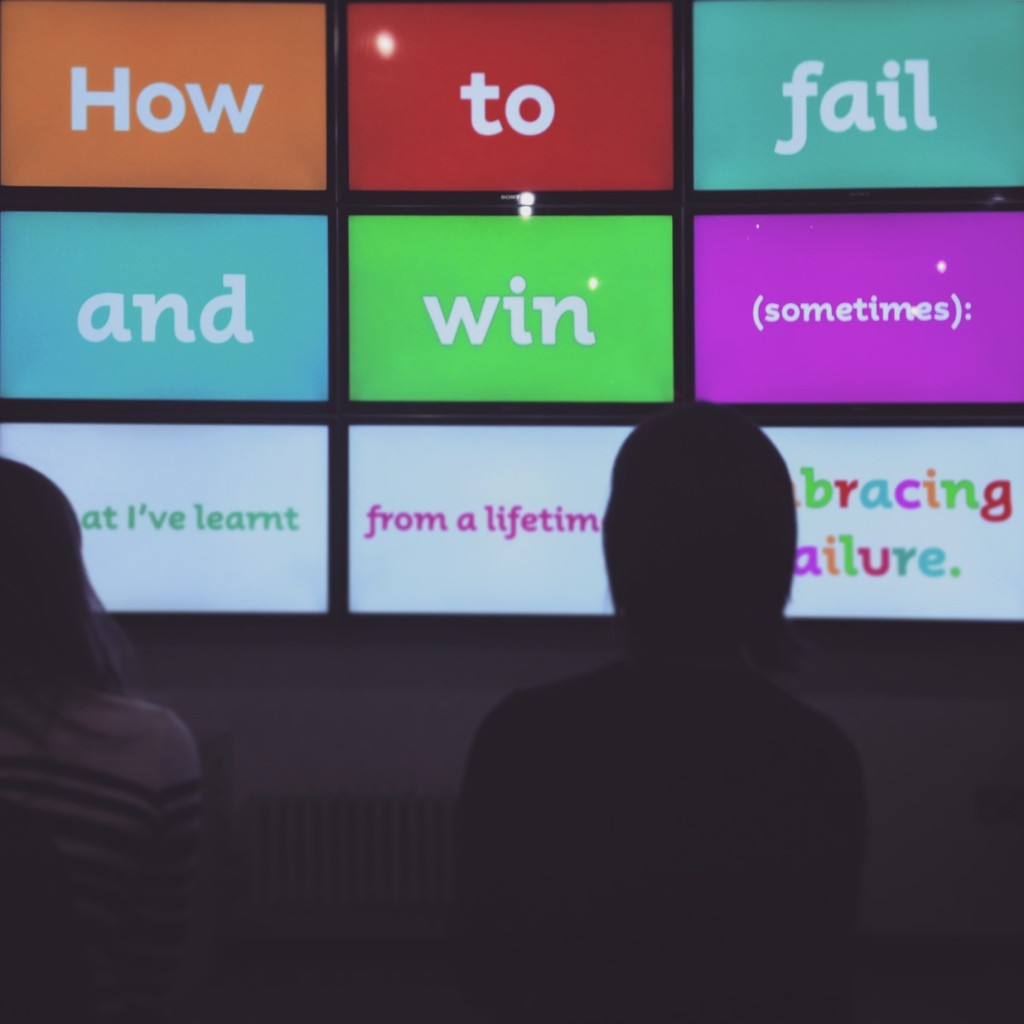 The other week (sorry I’m a little behind on posts) I went to a She Says talk hosted by advertising agency Wieden + Kennedy. Joined by familiar (Lucy, Natalie, Lily, Lucy, Casey, Charlotte, Mariana, Vanessa, Harriet, Zach and Jo) and also a new face (Sara), the room was buzzing and full to the brim – the talk had literally sold out in 5 minutes! 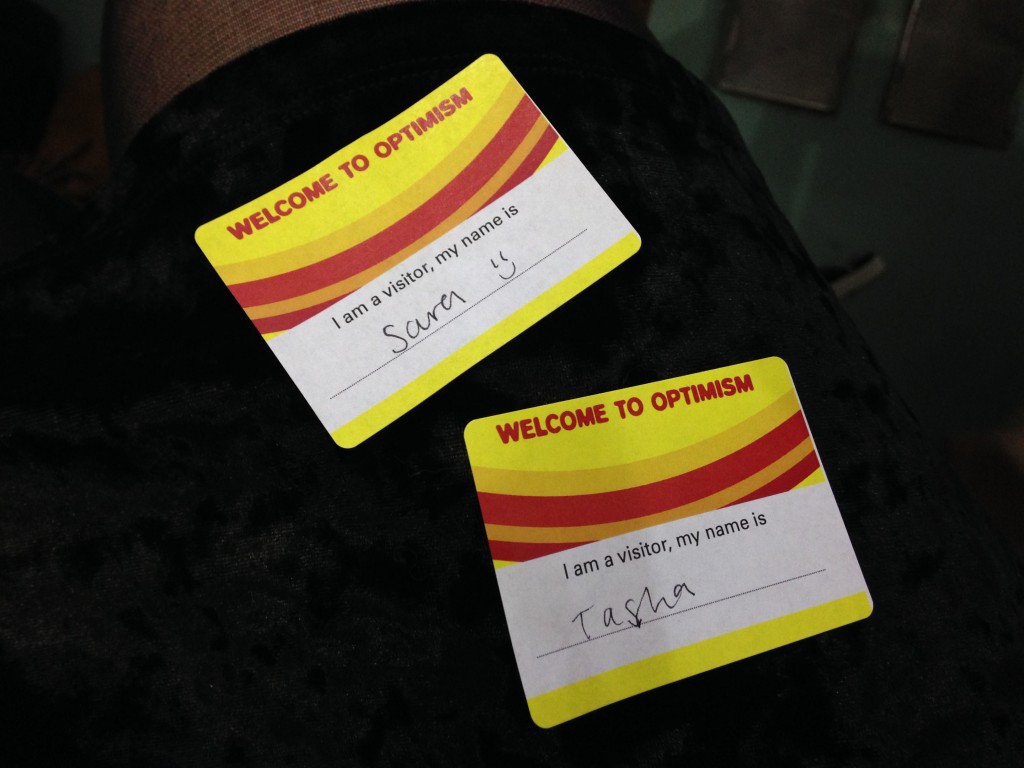 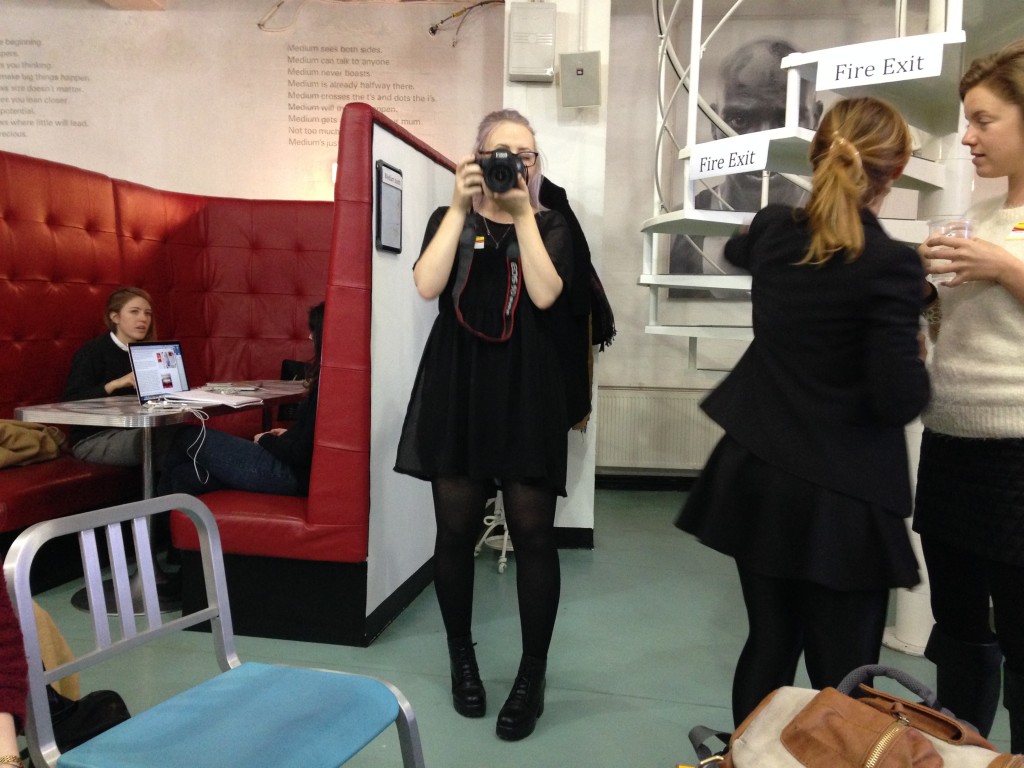 Lucy was on hand to photograph, whilst Jo from She Says acted as compère for the evening. It turns out that ‘Embrace failure’ is a bit of a saying at W+K, so the 3 lovely (and very successful) ladies were well equipped to share their stories and perspectives. 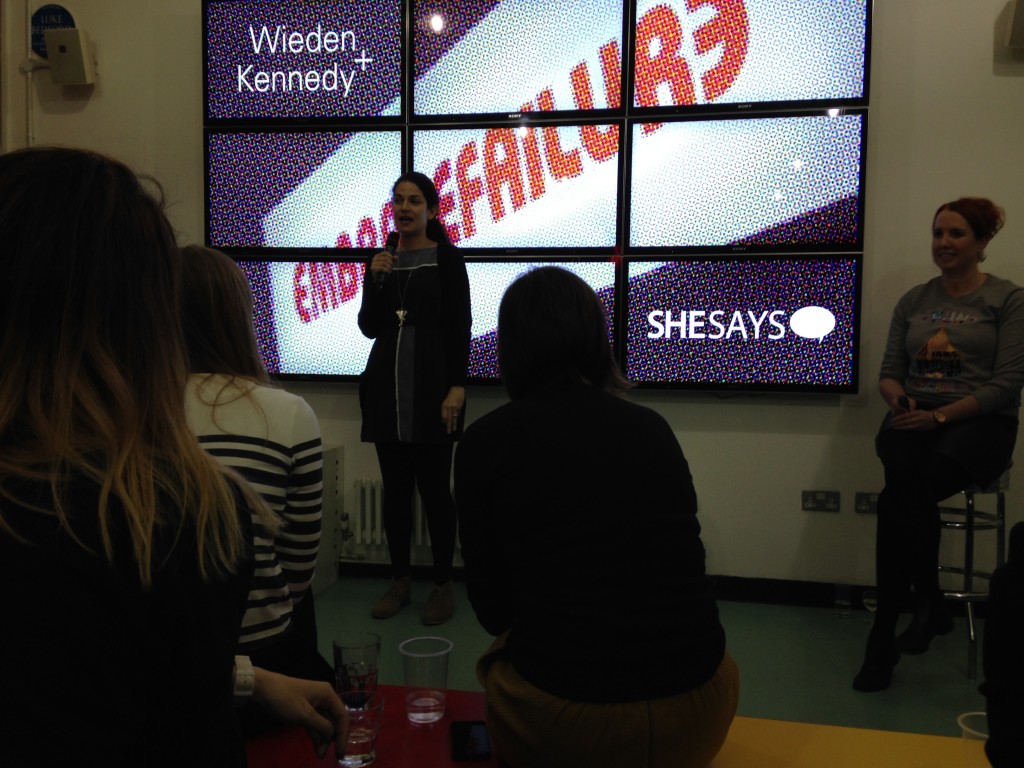 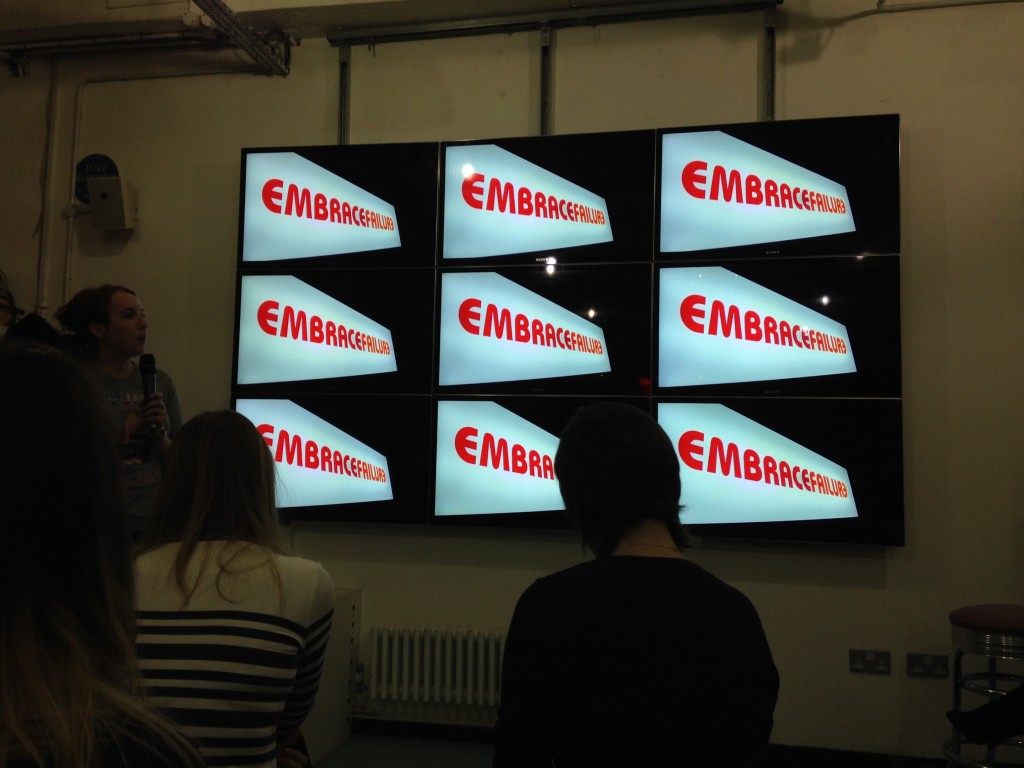 First to take to the mic was Helen Foulder, Deputy MD who explained that being scared is a natural part of creativity: ‘If you’re not scared, you’re probably not doing anything exciting or original!’

She talked us through her role at W+K and some of the campaigns she had worked on, including Cravendale. Remember those model cow adverts? Well, they were doing ‘ok’ (as Helen put it) but Helen decided that ‘ok’ wasn’t good enough and that they should convince the client to try something else. I don’t even work in advertising but I know that trying to persuade a client to try something new when what they’ve already got is working quite well is like squeezing milk from a lightbulb. But hey, sometimes you need to live a little and push the boundaries of creativity: 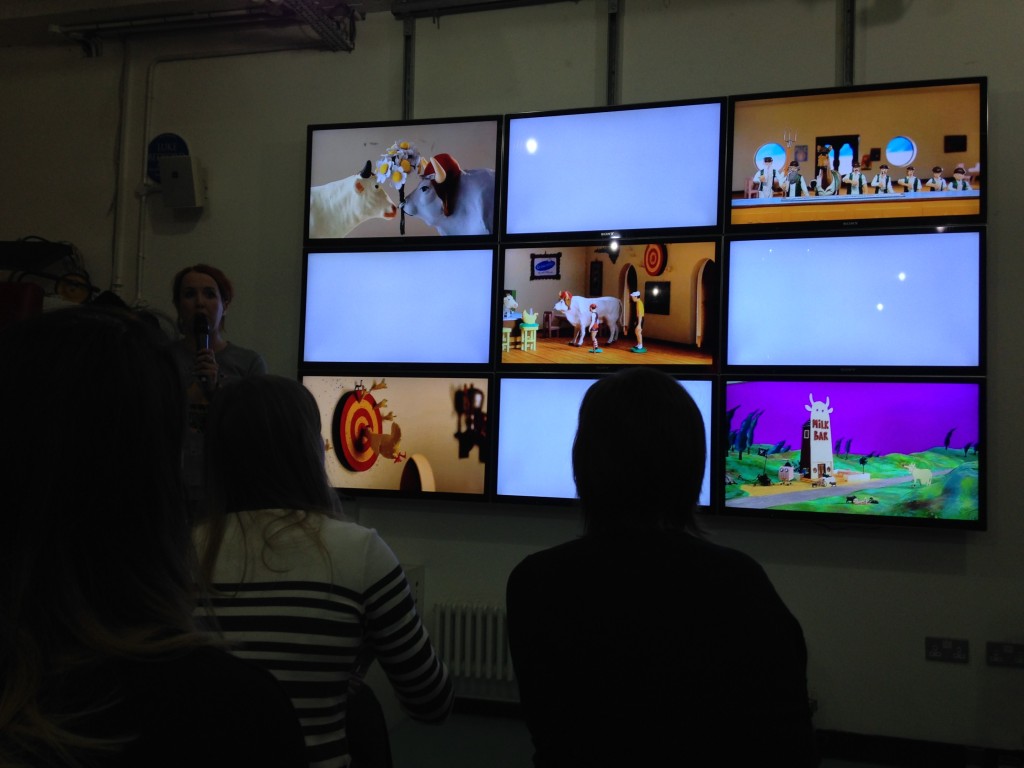 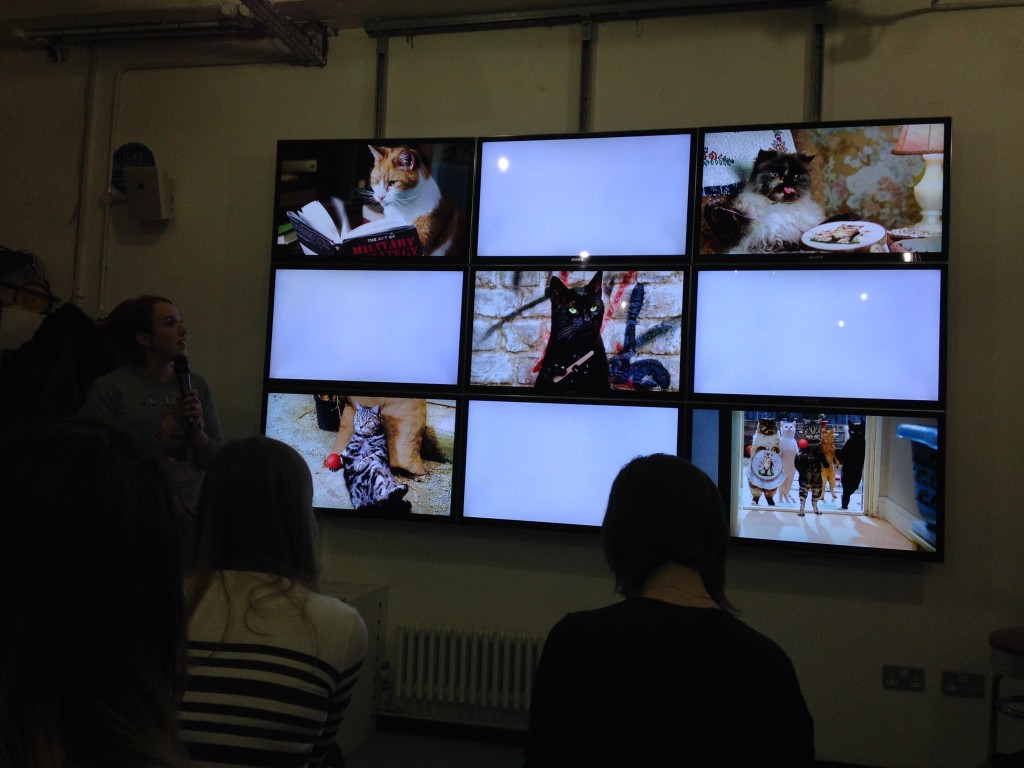 … and give cats thumbs! Those Cravendale cat adverts replaced (gave the finger to ha) and eclipsed the cow adverts – sometimes taking risks pays off. And this is proved again in Helen’s work on the dancing pony advert for 3 – ‘Are we crazy? Will people think we have lost our minds?’ Doing something that makes you uncomfortable is just what we all need – who wants to ‘play safe’ their whole life? (especially as a creative)

Other words of wisdom from Helen:
– ‘It’s ok to fuck up – gives you permission to try new things.’
– ‘Fear of failure stopped me doing things. I would only do things that I knew I could do well.’ (I can relate to this one SO MUCH – I’m always scared to try new things incase it doesn’t work out but I love a challenge and pushing myself to learn!)
– ‘We’re our own worst critic.’
– ‘Sometimes caring less = more interesting ideas/outcomes.’ (Never scrap an idea because it’s ‘too crazy’ because if we all had that attitude there wouldn’t have been a dancing pony!)
– ‘Reward yourself for having a go – what can you learn?’

Second to the stage was Vikki Kottler, Creative Services Director. I had no idea what that job title meant, and she explained that she didn’t know either before she applied for it.

Vikki talked us through her career journey – beginning with a degree in Art History and following her Mum’s advice to go into advertising. She explained how she left a job that she loved and felt comfortable with to take on a new challenge. ‘Leave to learn – don’t stay because it’s the safe or easy option.’

Like many, Vikki also has a fear of making decisions. I am SO indecisive, which often means that I leave things to the last minute until I HAVE to make a decision under pressure. Everyone makes thousands of decisions daily, from crossing the road to writing this blog post. Unless you live your life by a magic 8 ball (which is a decision, technically 😛 ), we all have the ability to choose an option. Sometimes you already know the answer, and the best way to realise/convince yourself is to talk through it with another person. It really helps to just get it out of your head, and by the time you have explained the ‘problem’, the chances are that you will have solved it!

Which leads on to: 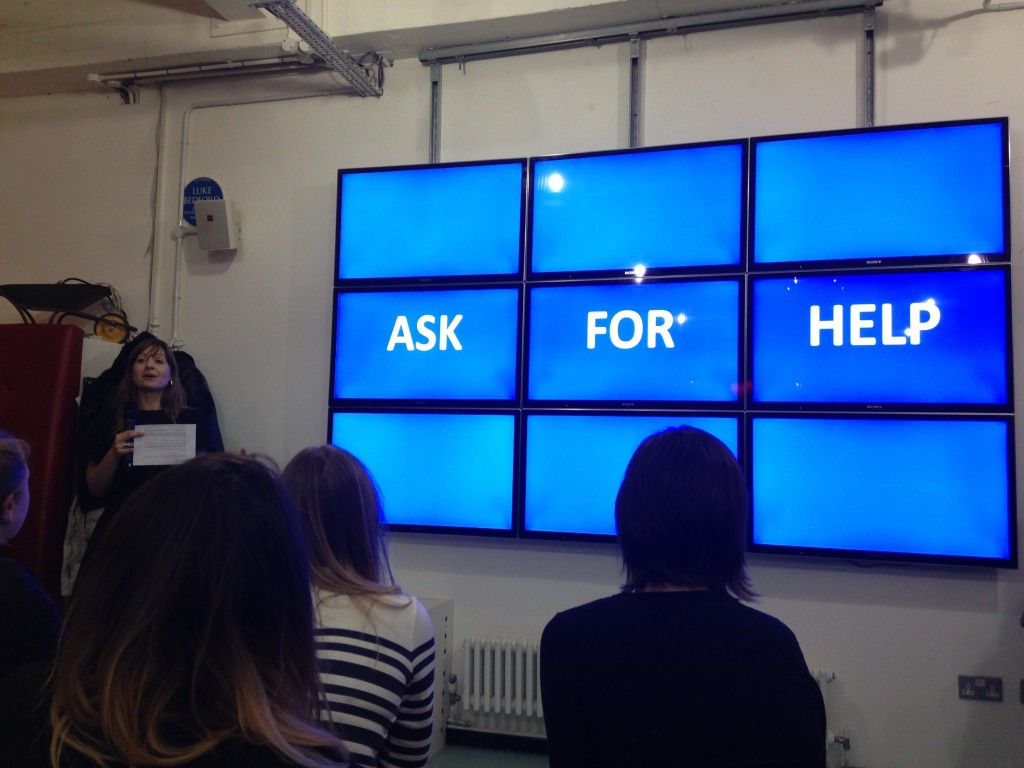 Ask for help! This is something that I highlighted in my talk at Lincoln a week later. You don’t have all of the answers, and nobody expects you to try something new and get it 100% perfect the first time. If we can all help each other in a small way (whether that be by passing on knowledge or lending a shoulder to cry on) the world would be a happier place.

And finally, keep perspective. Yes, our jobs are very important but we are creatives, not paramedics. If you make a mistake, nobody is going to die!

And last but not least, Creative Director Ray Shaughnessy took to the stage with her colourful presentation on ‘How to fail and win (sometimes): 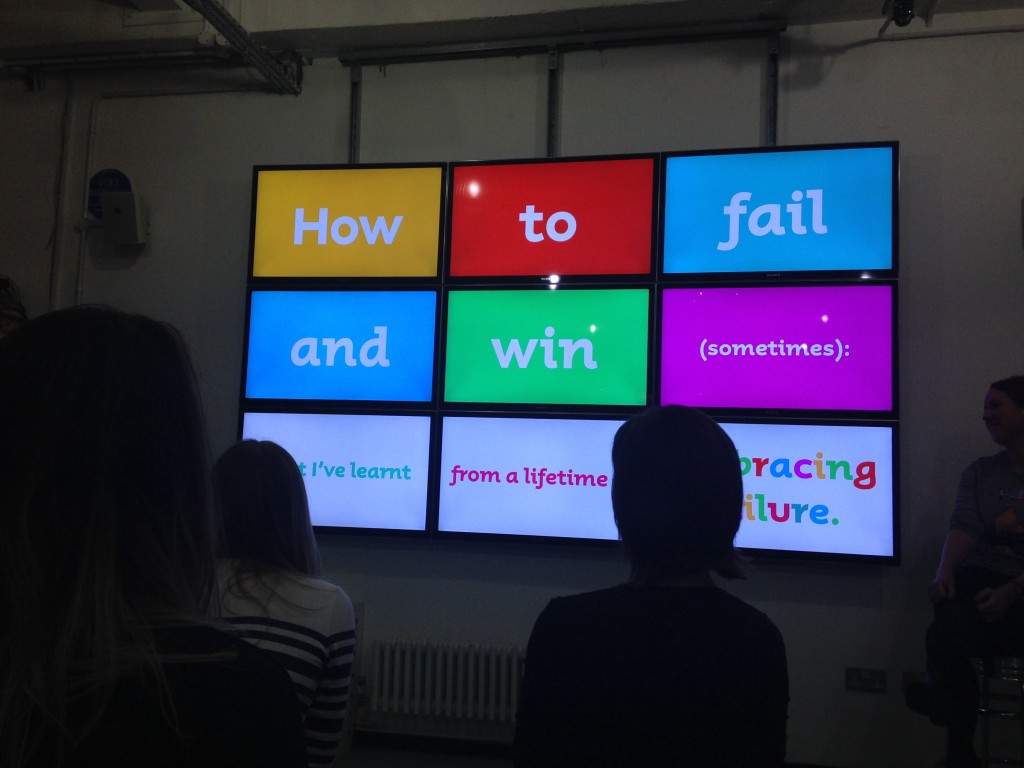 Ray began with a story about the time that she submitted layered collages instead of scamps(quick sketches) to a D&AD brief which was met with LOLz. She explained that she always felt like she was playing catch up to be as good as her creative partner (although clearly that’s not what he thought!) and basically just stumbling through with some luck.

She quoted Dave Wieden: ‘ You’re only good after you’ve made 3 tremendous mistakes’ and reassured us that ‘Fear is good – so you should own it.’

What I found particularly interesting about Ray’s story was that she included an insight to being a woman in advertising. Her first son was born between her time at sixth form and University, and she spoke about balancing motherhood and a career: ‘You’re a human being, not just a worker!’ She also talked about the 3% campaign by Kat Gordon and how she was very shocked to be the only female judge in an awards panel of 12.

‘When you get to a level and have worked shit out you should share it – send the lift back down.’ This is something which I really believe in and am already trying my best to act upon. I was talking about this with some of my work colleagues last week; how some senior creatives are punishing new creatives by saying ‘I had a hard time/I worked for free so you should have to too’. I really don’t agree with that attitude! 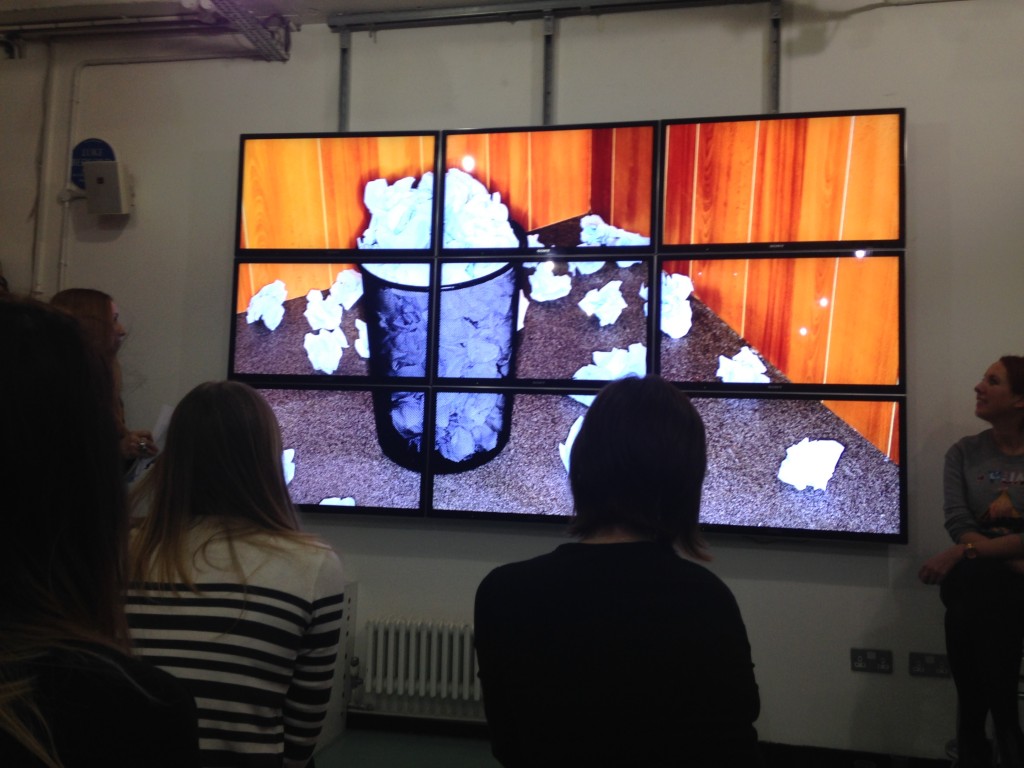 Final words from Ray:
– ‘You don’t want to suss everything out – never stop failing!’
– ‘Learn to switch off – put it in a box and leave it at work.’
– ‘Everyone’s just winging it!’ (which I borrowed for my Lincoln talk) 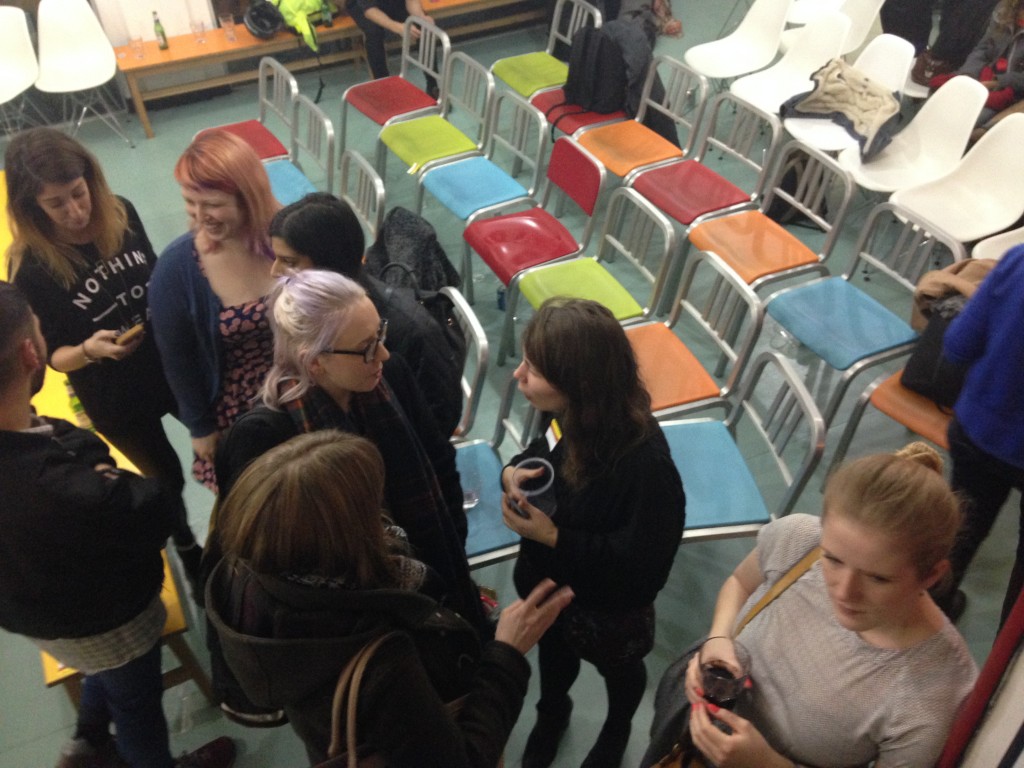 What a brilliant and inspiring talk! I felt so passionate leaving the W+K studio because I really agreed with everything the ladies had said and I think that it’s important for graduates to hear. Not everything in your career/life is going to go to plan – we are all going to fuck up at some point. And most importantly that IT’S OK! Learn, laugh and move on from your ‘mistakes’… and pass it on to the future generations 🙂

As always it was lovely to see the She Says crowd – there’s a fair few Lincolners (majority Creative Advertisers)that attend the events so it’s always good to catch up. I think that newbie Sara enjoyed the talk too. I feel that even though I’m not an advertiser it’s good to learn about, take inspiration and spin the advice to Graphic Design as it’s a similar industry and shows me another way of thinking.

What did you think to the advice? Are you going to embrace failure from now on? Or maybe you’re thinking about attending a She Says event? Let me know 🙂