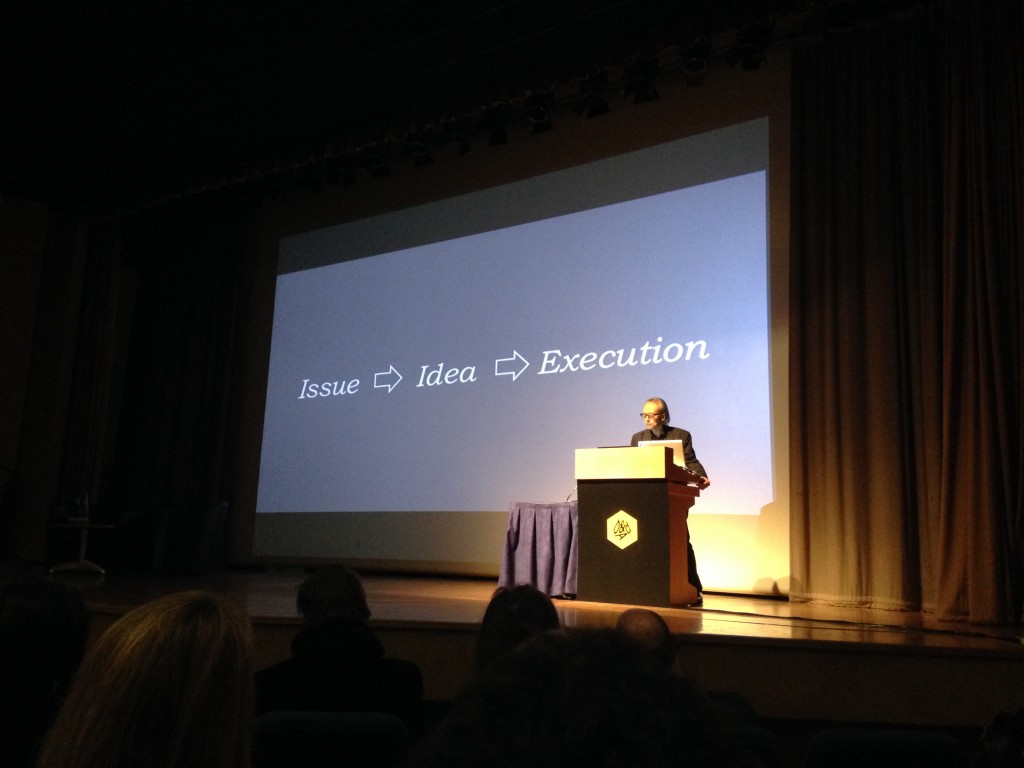 Last week I went to one of the D&AD President’s Lectures. My housemate Lucy had a spare pair of tickets so I was quick to snap them up for Sara & myself.

The speaker for the evening was Yuya Furukawa, Chief Creative Officer at advertising agency Dentsu in Japan. I’m getting used to hanging around with the advertising crowd at SheSays events, and although I am not an advertiser, I love to learn about how the creative process differs/has similarities for me as a Graphic Designer. What I’m finding is that most of the time there’s not much difference at all. But still I continue to learn and learn I did from Yuya’s talk: 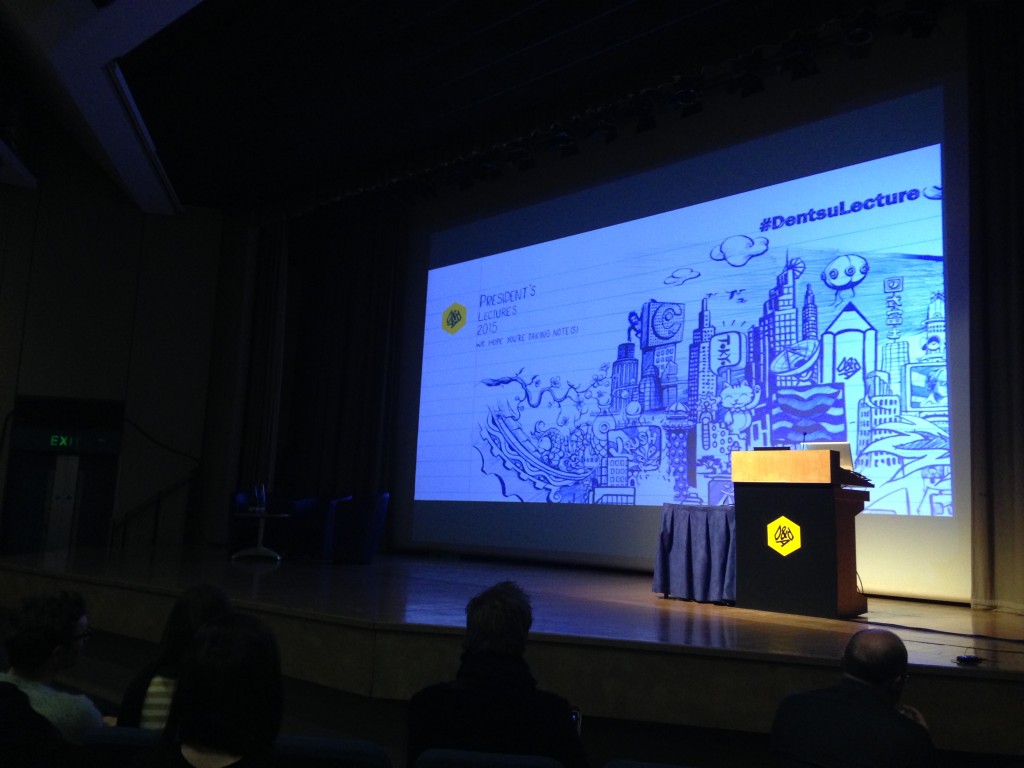 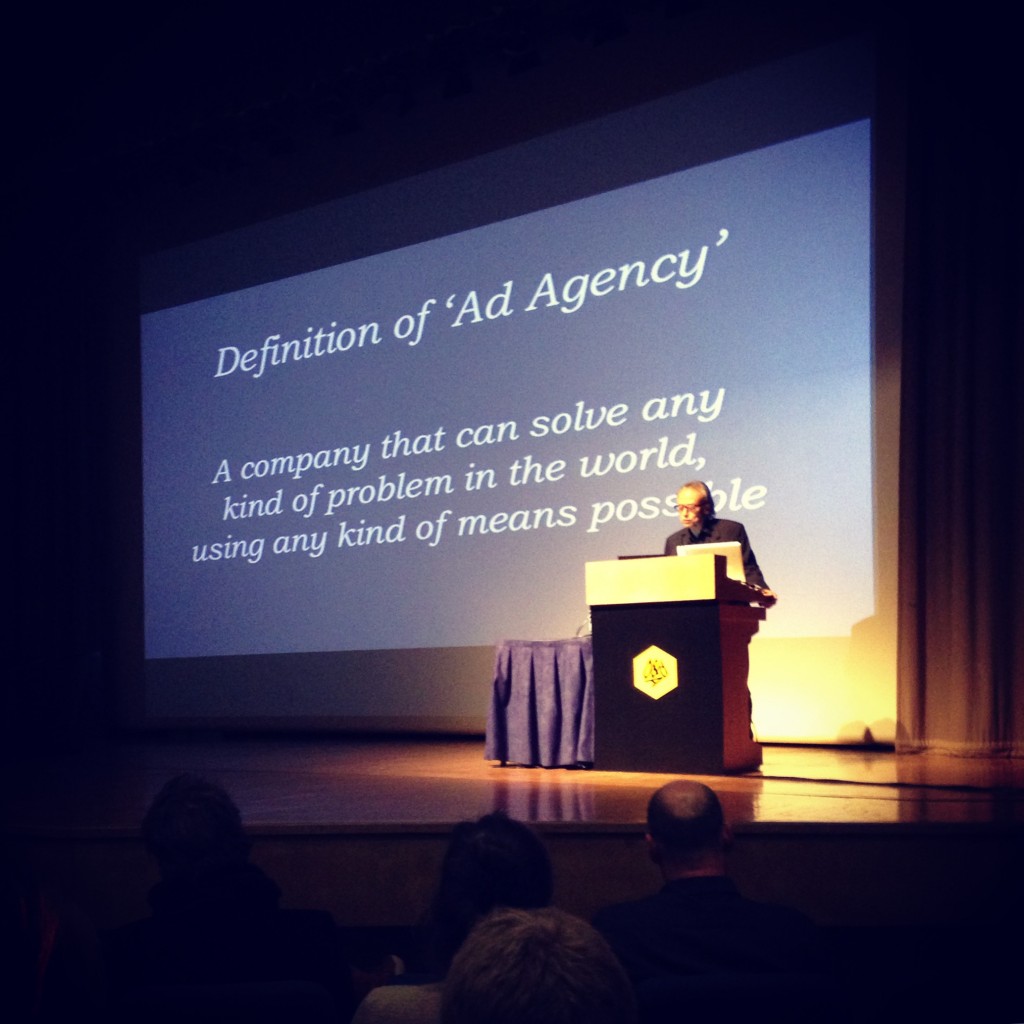 Yuya’s talk was based around a list of things which are important in the world of advertising. The list had over 20 items but he focused on just Design and Technology. Yuya shared some of Dentsu’s work for D&AD and Honda, with lots of inspirational quotes and insight into his creative mind.

As a curious person, my attitude to life is to learn, adapt and relate. I try not to take things for the ‘face value’ because that would be only one way of thinking. When he flicked onto a slide that read:

‘Ad Agency: A company that can solve any kind of problem in the world, using any means possible’

I was excited – what an amazing thought that advertising can change/save the world. And yes, we all know that advertising has the power to influence people to think/do/buy something, but is it really advertising or ideas or creativity that should be the hero here? (I know that he was just talking about advertising because he is an advertiser, but I’m just sharing how I listen to people and adapt/question) One thing is for certain, creatives have an important role in the world – we’re not just there to make things look nice! 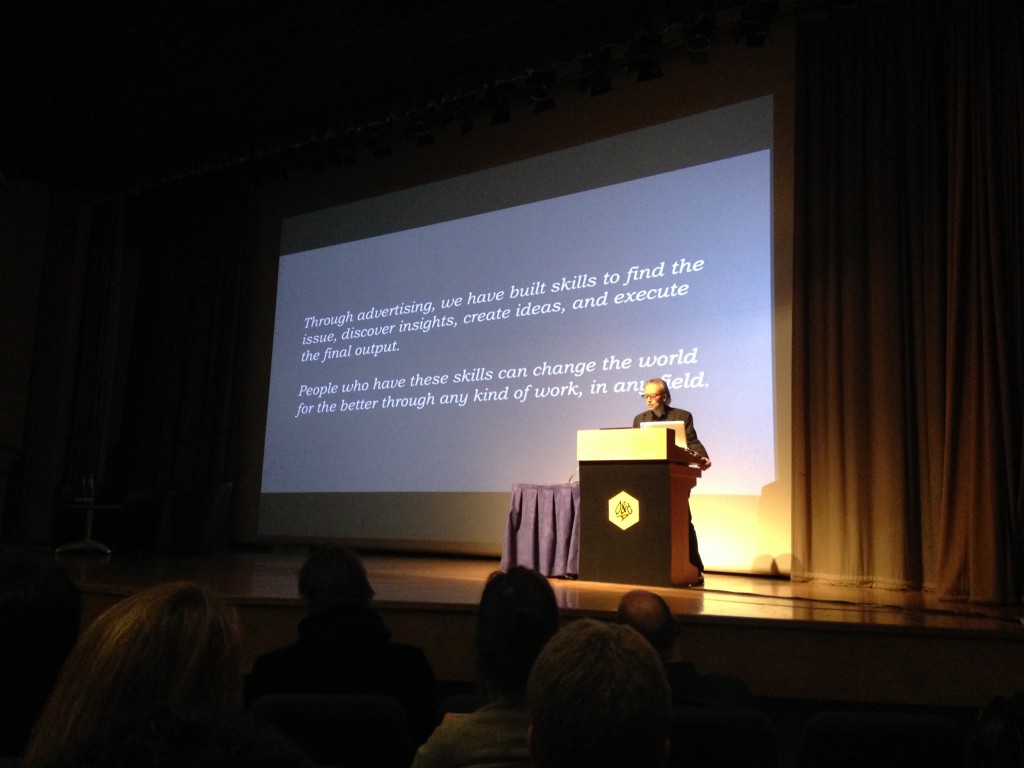 So as I mentioned before, the similarities/differences between Advertising and Graphic Design fascinates me. But essentially they both comprise of 3 steps:

Creatives are problem solvers. We might not all be able to solve complex algebra, but we can look at the way humans behave, assess the situation, generate ideas and (hopefully) solve the ‘problem’. We might not be saving lives in a literal sense like doctors and nurses, but we have the power to influence, and hopefully for the better.

‘Creation – when parts of information come together, it all makes sense.’

I have admitted before, I am a bit of a data geek. I did’t realise until in my 2nd year of University we were set a data visualisation brief which involved researching, collating, analysing data and then designing it so it could be read and understood by an outsider. Trends, patterns, repetition and anomalies – I find it all very interesting, so when Yuya started talking about data and technology I was pretty happy:

‘Data is evidence that will remain forever’

So what does that mean? Dentsu worked with Honda to pay tribute to Ayrton Senna, a F1 driver. Using data and a sound recording, Dentsu were able to recreate Senna’s 1989 lap with lights. Why does this matter? My Dad is an avid F1 fan so I am used to the sound of cars whizzing around corners on a Sunday, but I never thought I would choose to be watching a light go round a racing track. It’s pretty cool and atmospheric – see for yourself:

‘Technology has meaning only when it moves people’s hearts’

Yuya showed us Pepper the robot – we are used to the idea that robots are built to replace humans, like within high risk and repetitive jobs. But Pepper is a different kind of robot – it can learn our habits, preferences and emotions – it’s partner for humans. If I’m honest, the idea of a robot that can learn and adapt is kinda scary to me (although has anyone seen that they’re just releasing a film called Chappie?) but Pepper looked pretty sweet from the photos Yuya showed.

Along the same lines, Yuya shared a video about how a Japanese celebrity (Matsuko) became an android Matsuko and a celebrity in her own right. The android joined Matsuko on her chatshow, where it became a conversation between human and android clone – very interesting. Would you want your own robot clone? Apparently it takes only 6 months to make and costs £110,000 – not as expensive as you would expect.

‘We are in an era of change. Where will our industry be in 5/10 years time?’ It’s a good question, to which I am right in saying that nobody knows. These days it is very hard to predict the future because everything is changing, adapting, developing all the time – our lives are so fast paced! 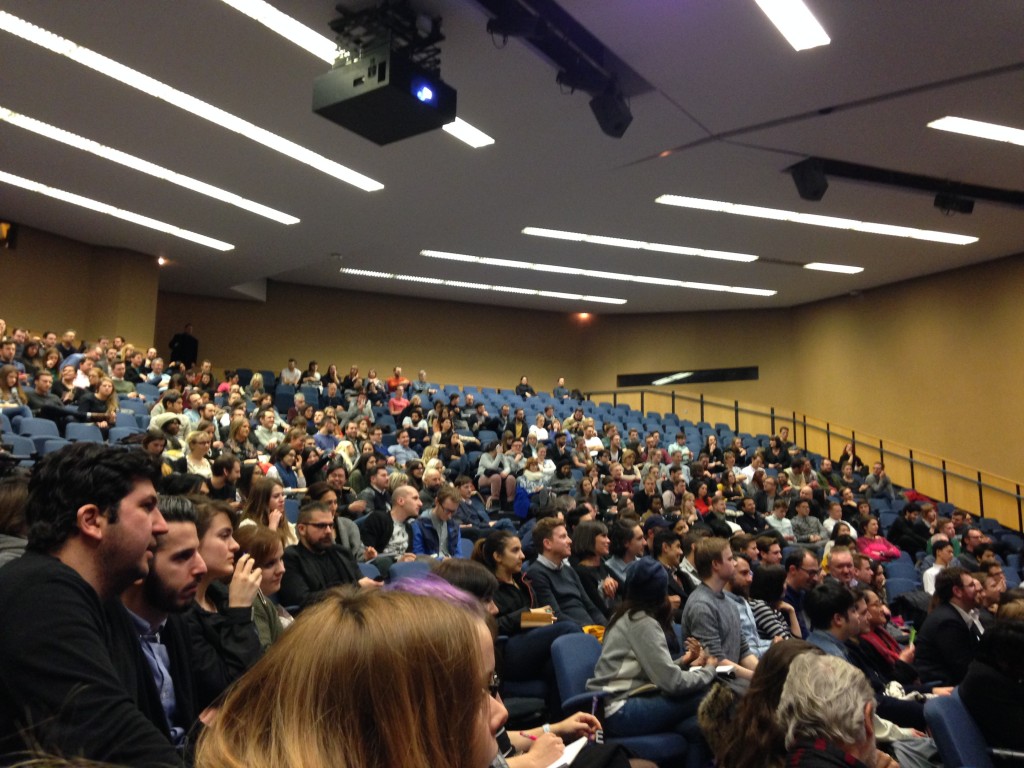 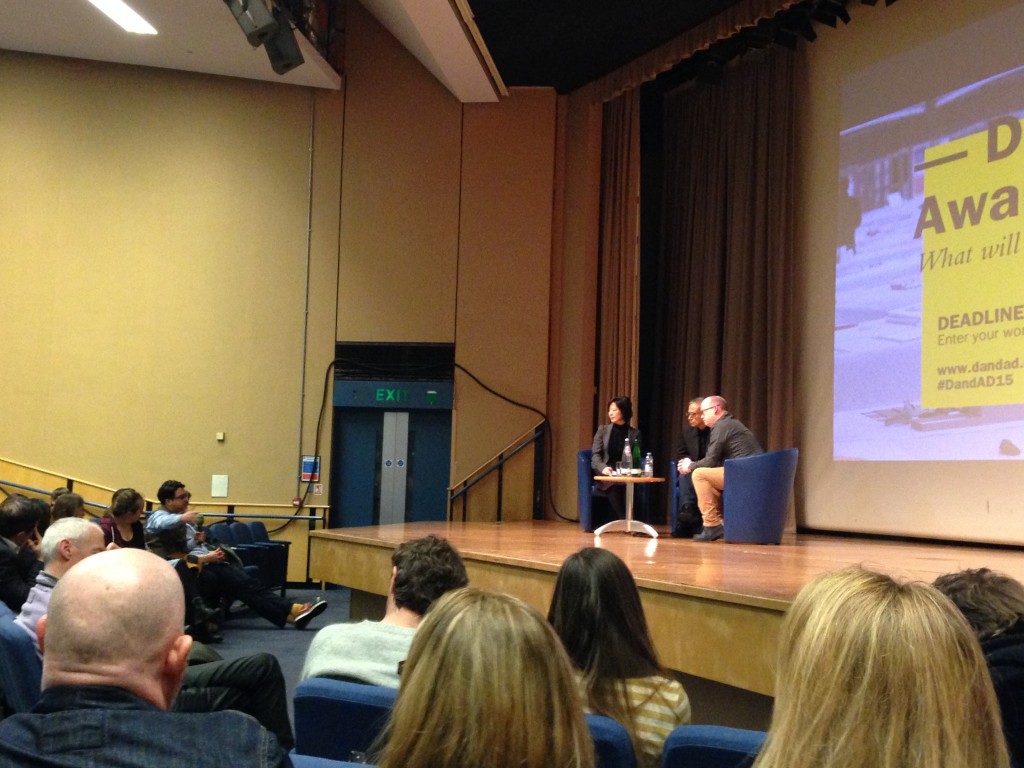 After the talk there was the chance to ask questions (using an interpreter) and here are a few quotes of note:

‘Creative process is basically the same for every job, no matter where in the world (Issue -> Idea -> Execution)’

‘Advertising creatives are very powerful because they are already trained to come up with 100 ideas in one day.’

‘Any brand has the potential to create a brilliant campaign’ even everyday items.

And when asked for his advice to young creatives trying to break into the industry, his response? ‘Don’t listen to old people like me.’ Which was met with laughter.

There must have been over 500 people in that room; packed with creatives from all walks of life. I enjoyed the talk, and thought that Yuya did a great job – speaking to a crowd is not easy and especially when English is not your first language. Thank you to D&AD and Yuya for the inspiration.

Were you at the talk too? Or maybe you couldn’t make it but have thoughts on the quotes I have included – let me know 🙂