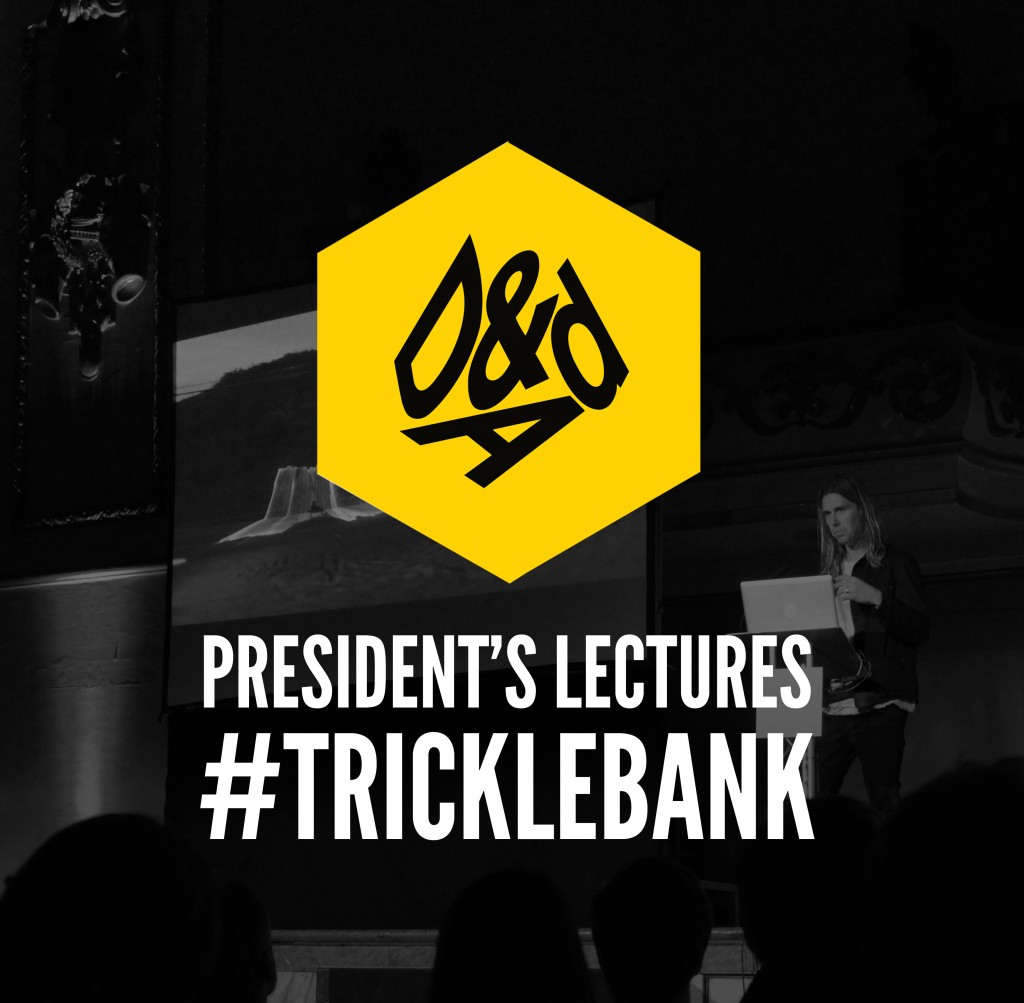 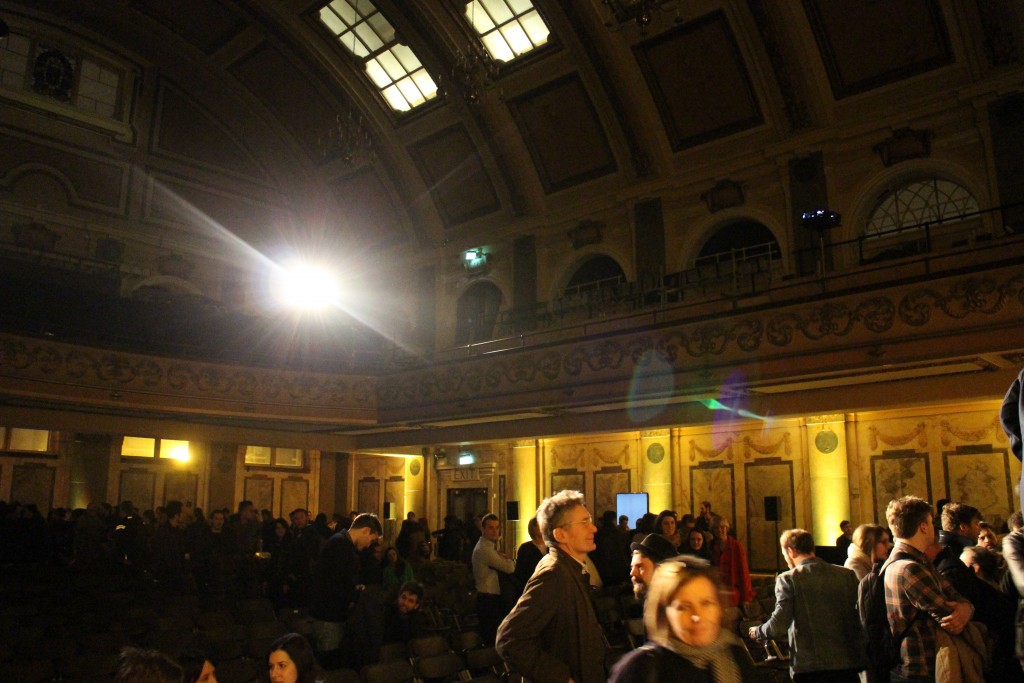 The other week I went to 2015’s first D&AD President Lecture by Yuya Furukawa on a whim and, as always, left feeling so inspired and motivated. After posting my thoughts about the talk I was really excited to be invited by D&AD to the next lecture: Ben Tricklebank. On Wednesday I headed to Shoreditch Town Hall after work – a beautiful building, it was jam packed with people eagerly waiting for Ben’s talk.

Ben is a, well even he said that it’s hard to explain what he does to people. In my eyes Ben is a creative, an innovator, a do-er, an idea pusher. He works mainly with digital technology to produce videos/experiences. 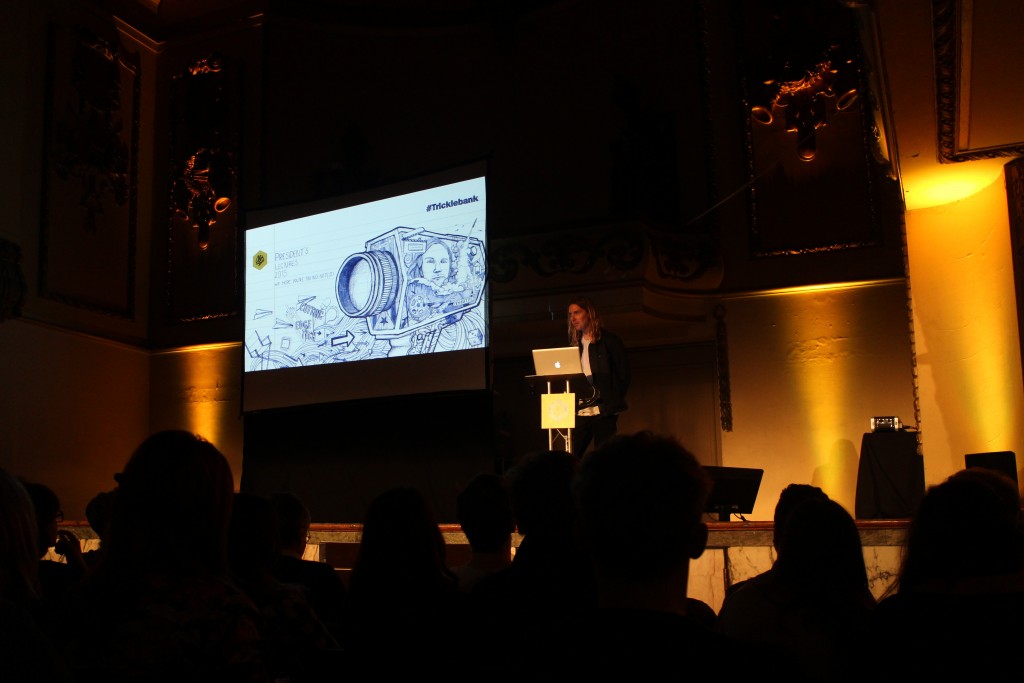 As a student, Ben studied Music Production in Manchester before discovering a digital world where music and moving image could be brought together via After Effects and CDs. He moved to New York seeking big opportunities, and from the show reel he played, big opportunities is what he got: the Dita von Teese Perrier advert, driving cars over the internet and the interactive Arcade Fire music video.

Just the other week I posted ‘The future of video’ and included the Arcade Fire music video, not knowing that it was produced by Ben. It was great to hear from the creative behind it and to understand a bit more about his creative process.

After working with directors, who were mainly focused on making good film, Ben decided that he wanted more control over his work and to fuse story telling and film with interaction. This is where Clouds over Cuba came in – a story that had been already told, but Ben wanted to tell it in a different, unique way.

‘It’s not about using the latest technology – it’s what’s right for the story.’

He explained that it was really intimidating working with Bob Richardson (a renowned cinematographer) but that it was so he could get those kinds of opportunities that he moved to LA – to open doors!

Ben shared an anecdote with us about The black light ‘look’, from working with Mini Cooper. ‘Always trust your instincts’, he says from experience. He shows us the set up for one of the Mini Cooper adverts; 140 8ft tubes filled with fluoro paint to create a line of black lights… 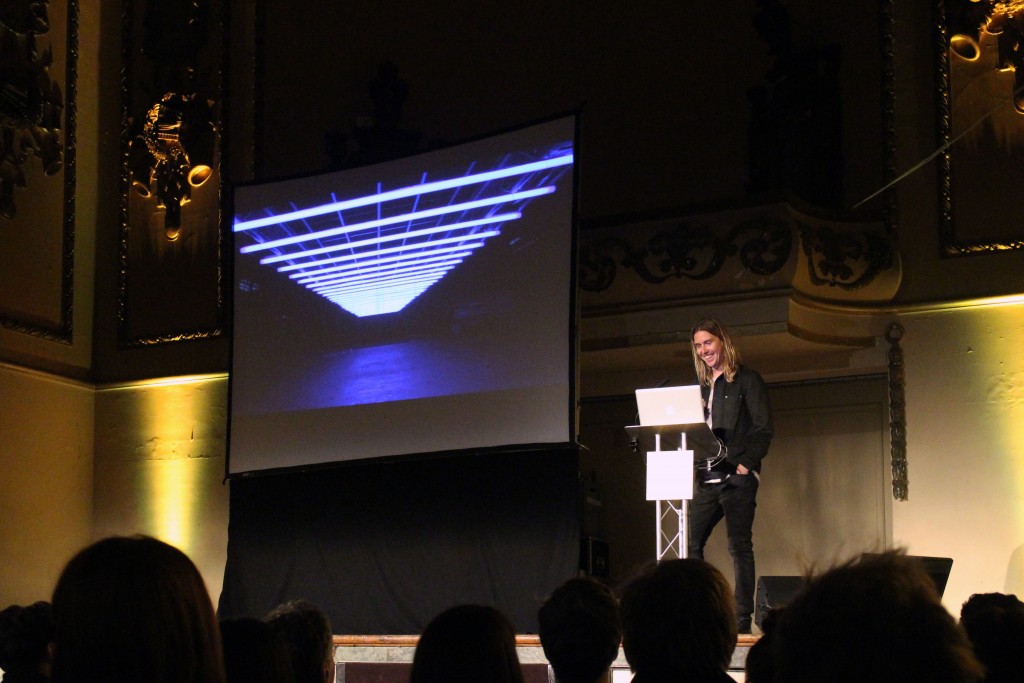 … except what he actually had was 140 tubes of paint made to look like black lights. The guy that had bought the tubes was told that these would give ‘the perfect black light look’, but Ben didn’t need ‘the look’ – he needed the real deal! He said at first they tried to make it work but in the back of his mind he knew that they would have to start again from scratch and find 140 odd real black light tubes. With 1 take, what they created in the end had to be amazing, and it was! 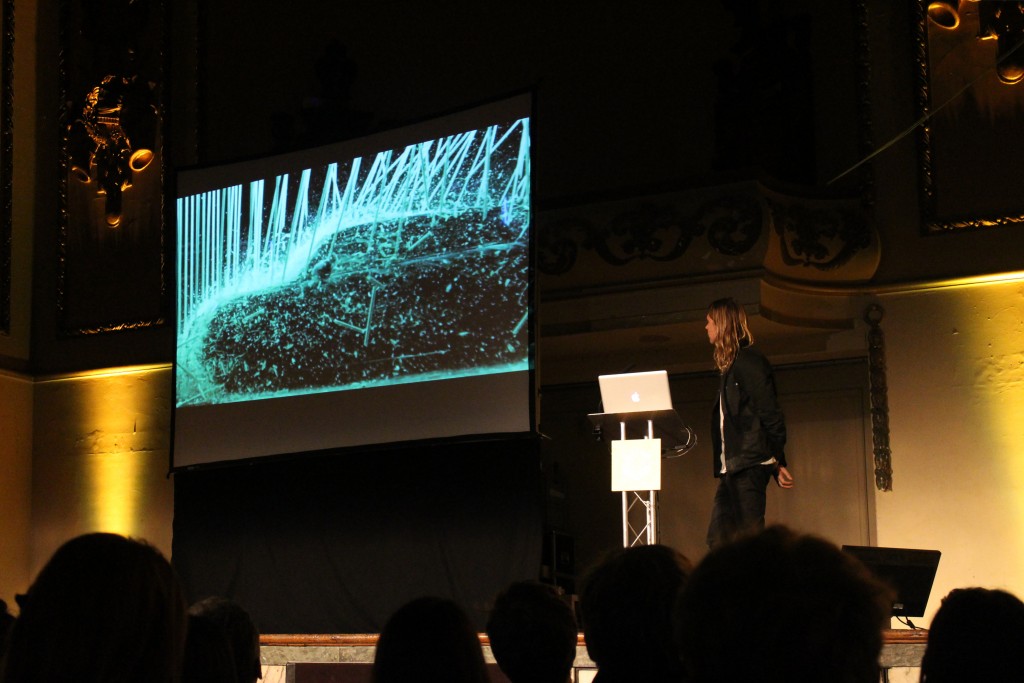 ‘Always put the story first. If you don’t have a good story it doesn’t matter what technology you use.’

Talking about the importance of stories, Ben spoke about an alternate reality mystery game which played out via Tumblr – clues were released and the fans then took the clues onto message boards to discuss and find the answer. Just because there is the technology to do something, it doesn’t mean that we have to use it – finding the right platform is key to an idea working, telling the story and connecting with people. It sounds insane, but in this game you could follow the clues to a flat in Lithuania to unlock a safe & get a CD copy of the actual game – how amazing is that!?? 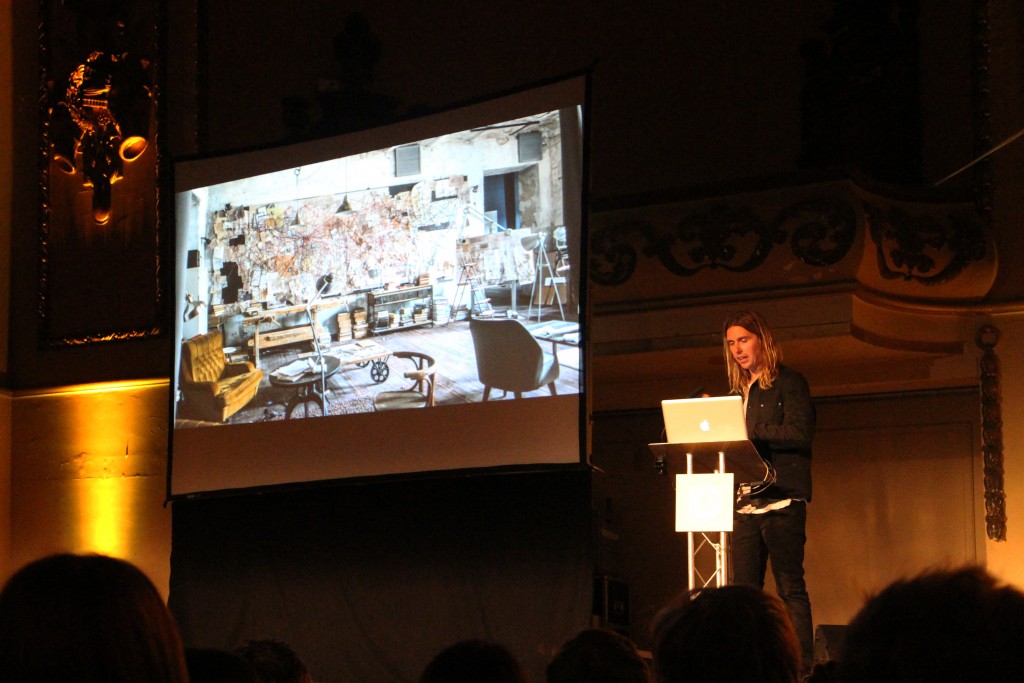 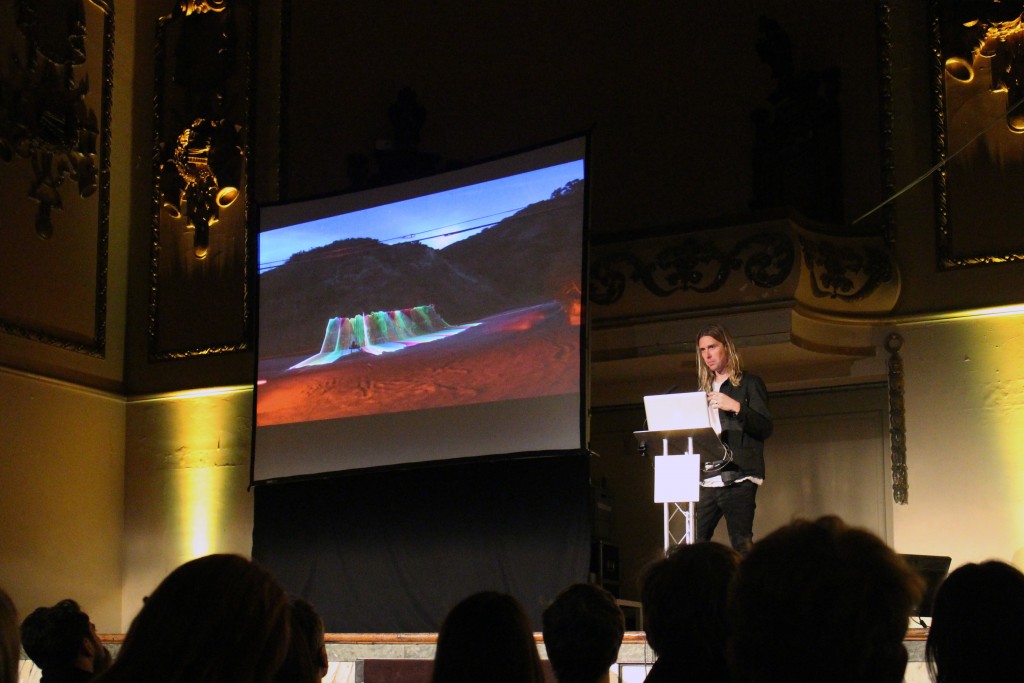 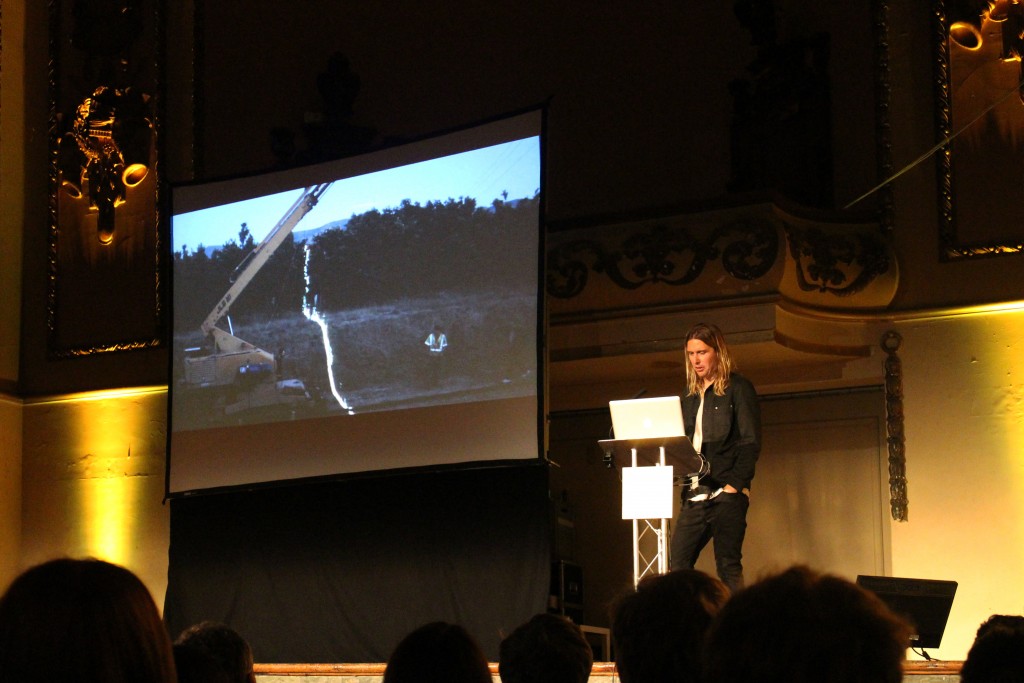 In the deserts of LA he experimented with the dark, lasers (freaking some people out) as paintbrushes and projecting multiple images onto objects (a sheep’s skull). He said he didn’t really know what he was going to produce in the end, but through experimenting with different methods, exposures etc he discovered it was possible to map a surface with light and movement. With a crew, a train track and crane they shot a series of sequences in which the lasers were invisible to the human eye, until dust started flicking up (which you can see in the above photo). The final video is amazing – watch it here. 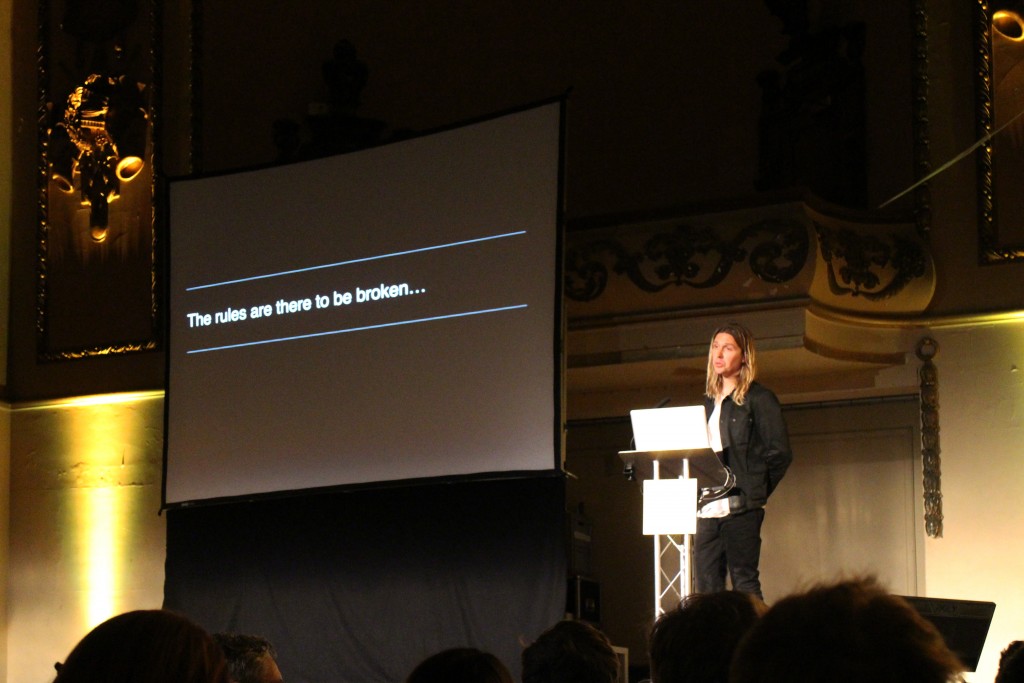 ‘Rules are there to be broken’ – probably something all creatives have heard at one time in their career. The new Converse campaign, launched just the other week, is based around the idea of putting yourself into somebody else’s shoes. Using a collection of Converse to represent influential artists and musicians, a series of virtual reality films were produced and installed in New York. 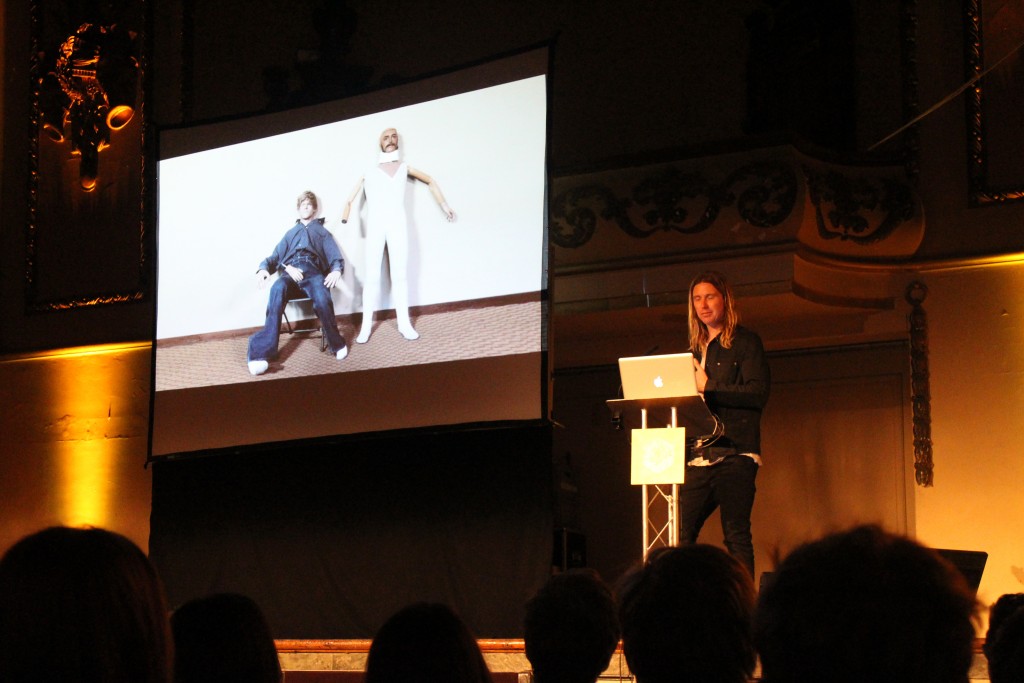 For the personality to shine through the shoes, and to really experience the world through their eyes Ben explained there was some boundaries which they had to overcome whilst filming. With 12 Go-Pros strapped to a helmet, they were able to shoot from a viewers perspective; looking down at the shoes, being on the edge of a high building etc. Ben was told that Go-Pros didn’t have the best close up focus, and that any filming would need to be a couple of feet away to ensure seamless filming from all 12 cameras. But he wasn’t going to let that stop him – he sent the helmet guy down a man-hole… one of the smallest spaces in the world! He said that at first the shots didn’t work, but that they spent some time and MADE them work: ‘Break the rules but be prepared to spend time fixing the problem.’

He finished with a brilliant quote:
‘If everything seems under control, you’re not going fast enough.’ – Push yourself, because if something seems to easy then you’re not being creative enough!

At the end the floor was open for a few questions. I heard a familiar voice and turned around to see Mariana and Vanessa (advertising creatives who I met through my housemate) so that was a nice surprise considering I thought I was in a room full of strangers! 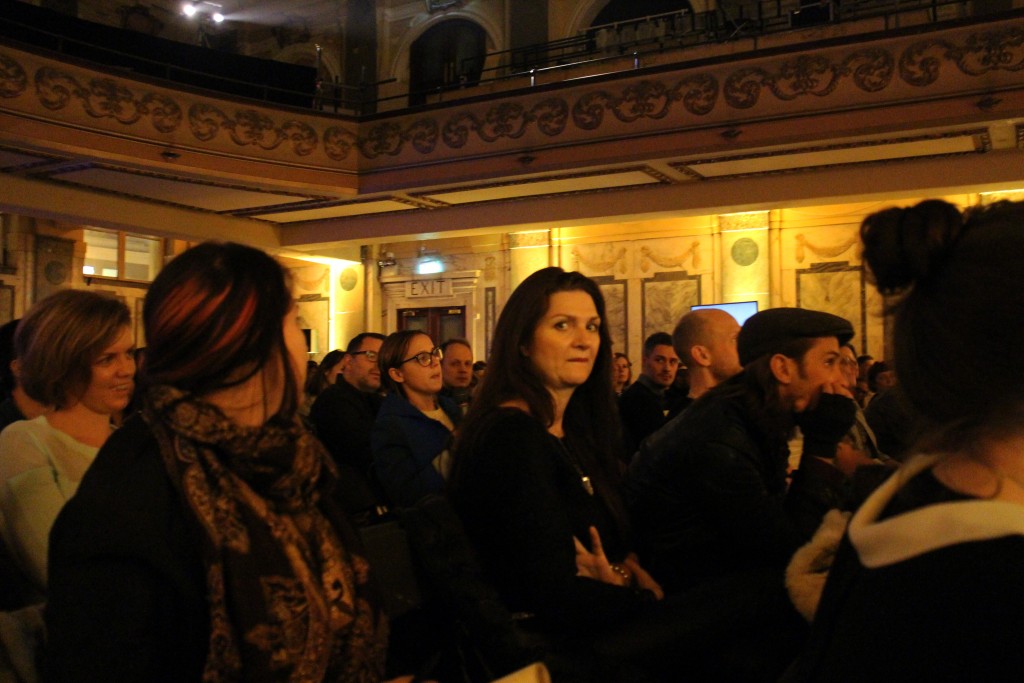 So what did I take away from Ben’s talk?

As a Graphic Designer working in a team/studio with 15 interior designers, I was really interested in the way that Ben spoke about using platforms. Sometimes it feels like retail experiences have everything going just to tick boxes (‘We’ll just put an iPad in  so people can look at the clothes’ – isn’t that why they’re in the shop!?) when actually it’s not always appropriate. In my mind, technology should enhance an experience, not own it. A brilliant example of using technology to create an experience was the The Marc Jacobs tweet shop sticks in my mind as a brilliant use of social media – tweets & instagrams were used as currency to ‘buy’ perfume samples, key rings etc. It created a massive buzz on and offline, and introduced a younger audience to a luxury brand that might have seemed unobtainable before. Very clever!

I totally agree with Ben that you need a great story before you can really build an idea – you can roll a turd in glitter but nobody will buy into a shit idea. So put away that glitter and get your thinking caps on guys!

Were you at the talk too? Let me know what you thought and what you took away from it. Thanks again to D&AD for inviting me – I can’t get enough of talks!