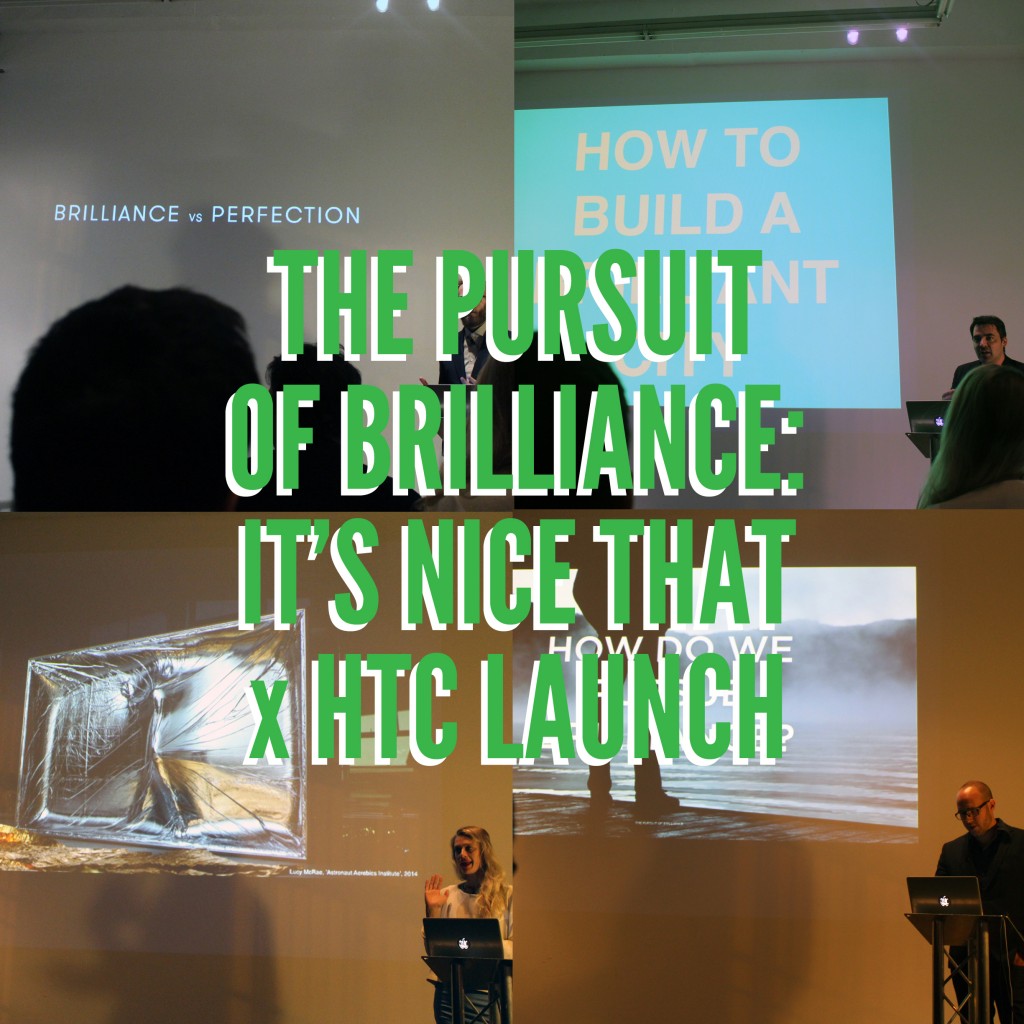 Last week was quite a busy one for me – 3 events on 3 nights in a row, that never happens. I’ve been making a real effort to push myself to go to more talks because I feel like I live in London with all of these great things happening and don’t really get to reap the benefits. So I was happy to be invited to the It’s Nice That x HTC talk on the pursuit of brilliance at Protein gallery on Wednesday night.

As an ambitious and determined person, I am always aiming to achieve ‘brilliance’, wether that be in design or blogging or sandwich making :), and so I was looking forward to hearing from some like minded people. 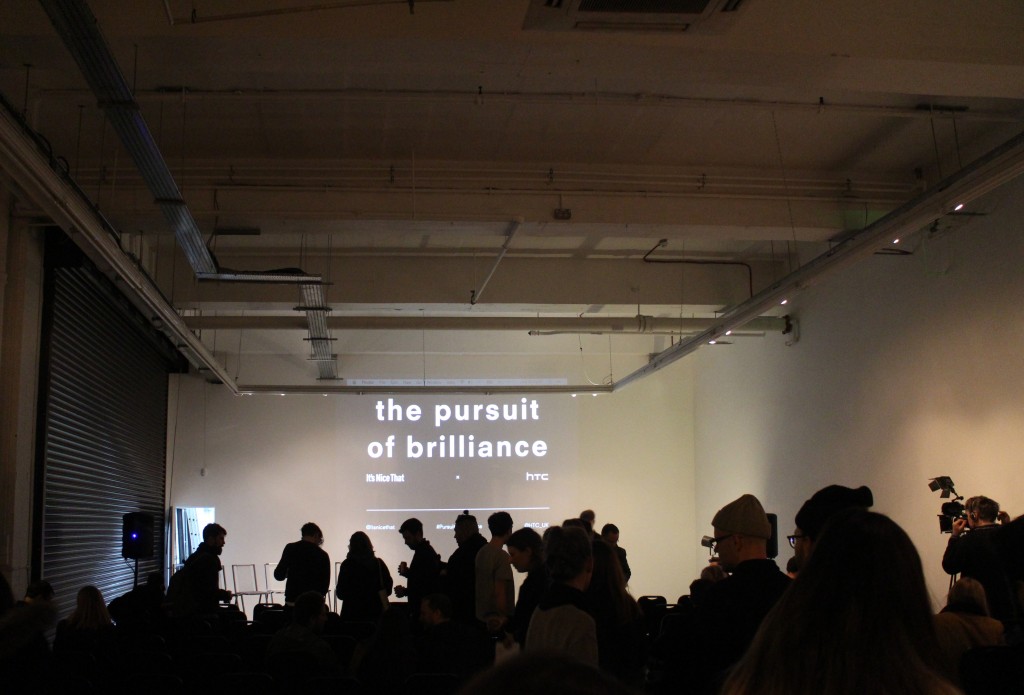 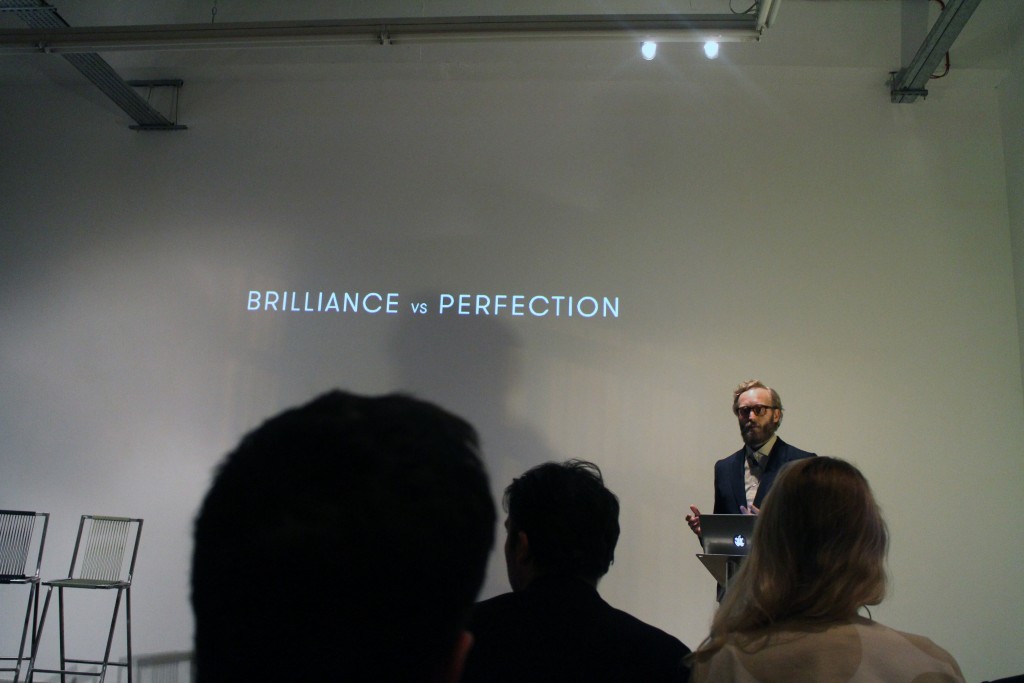 First to the mic was Nicolas Roope, the brains behind the Plumen lightbulb and digital agency POKE. He began with some examples of iconic design to explain the difference of brilliance and perfection including Concord and the iPod – both brilliant ideas that are not in use anymore, but are still brilliant.

He spoke about a silk worm pavillion at the MIT Media Lab in America which used 6500 silkworms to ‘3D print’ a dome – an amazing idea which was allowed to develop on it’s own without the interference of the designers. This is brilliance, when designers are unable to control everything.

Nicholas then told us about some of his own work, including the Albion tweet bakery alert ( a device that would tweet to a special bakery account when the bakery had freshly baked goods available – nobody wants to miss out on a crossiant!) and the Ted Baker regram campaing ( patterns and messages would be revealed when campaign imagery was regrammed).

Finally he explained how the Plumen lightbulb came around; he spotted a problem with lightbulbs – the way they looked when packaged on the shop shelves and the way the new environmentally friendly bulbs looked. After initial concepts, testing and development it took 2-3 years for the Plumen bulbs to reach market but they are now the bulb of choice for designers. I’ve started seeing them pop up everywhere; London Design Festival, Protein gallery, and most recently Plumen collaborated with the Design Museum for an installation in their Think Tank. 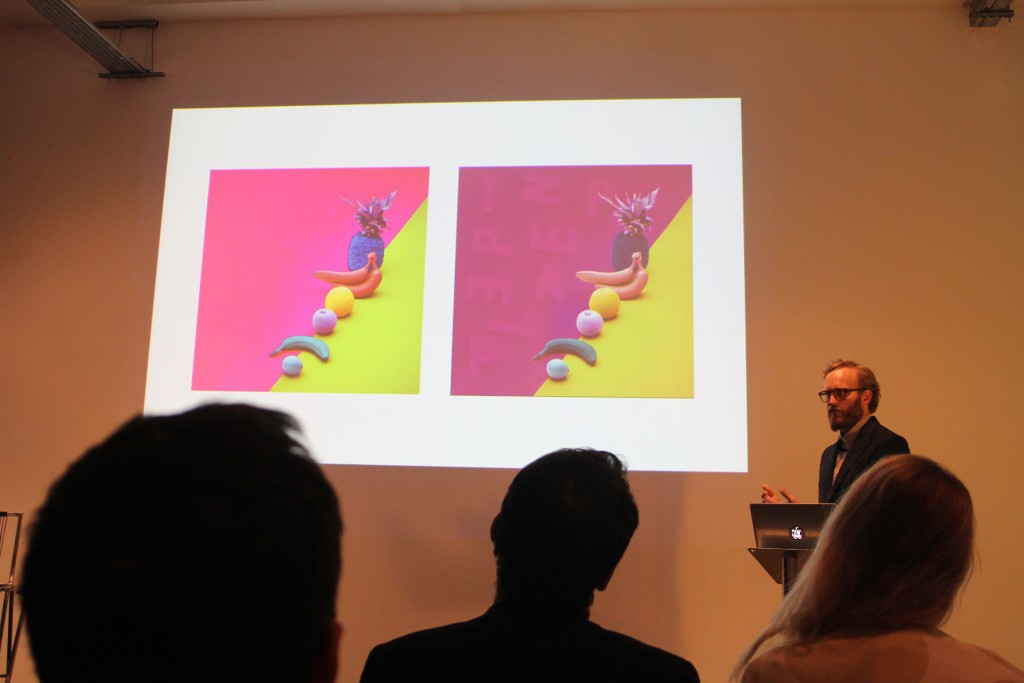 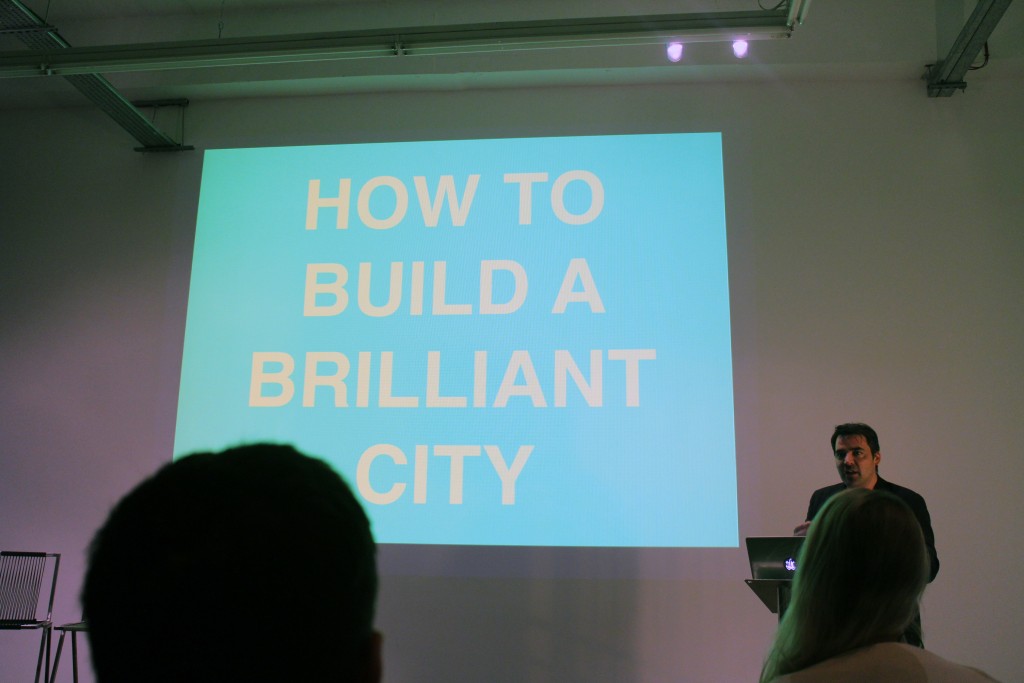 Next to speak was architect, Sam Jacobs, explaining the brilliance and imperfection of cities.

‘Cities are the places that we share our lives’

He pointed out that even though we have a lot of control in the modern day, you can’t design a whole city because they are over 2000 years old – that’s 8 generations. But the brilliance is that they are never finished and continue to evolve – an idea handed down. Sam explained how some cities can transform extremely quickly: Dubai turned from a desert into a metropolis in 13 years and Shanghai in 10 years.

With humans developing cities at such a high speed, the shape of our skylines can change within 5-10 years. Anyone working and living in London will notice that massive buildings can go up within months, seemingly blocking views and the iconic London skyline. But don’t worry, there are rules and regulations in place to protect – did you know that St Pauls is the most important building in London? Everything is planned with a viewing corridor in mind so that St Pauls can be seen for miles across the city! Interesting stuff.

Sam spoke about the make up of a city as an ecology of nature, history, money, data, planning and people – it’s very complex. Who even thought about cities in this way when everyone lived in small towns and villages? The godfather of the modern city is Ebenezer Howard, who looked at bringing all of the elements of town life and country life together to create ‘town country’, or as we know it, the city!

We will keep developing and changing our cities for generations to come, but the brilliance will be knowing when to stop. 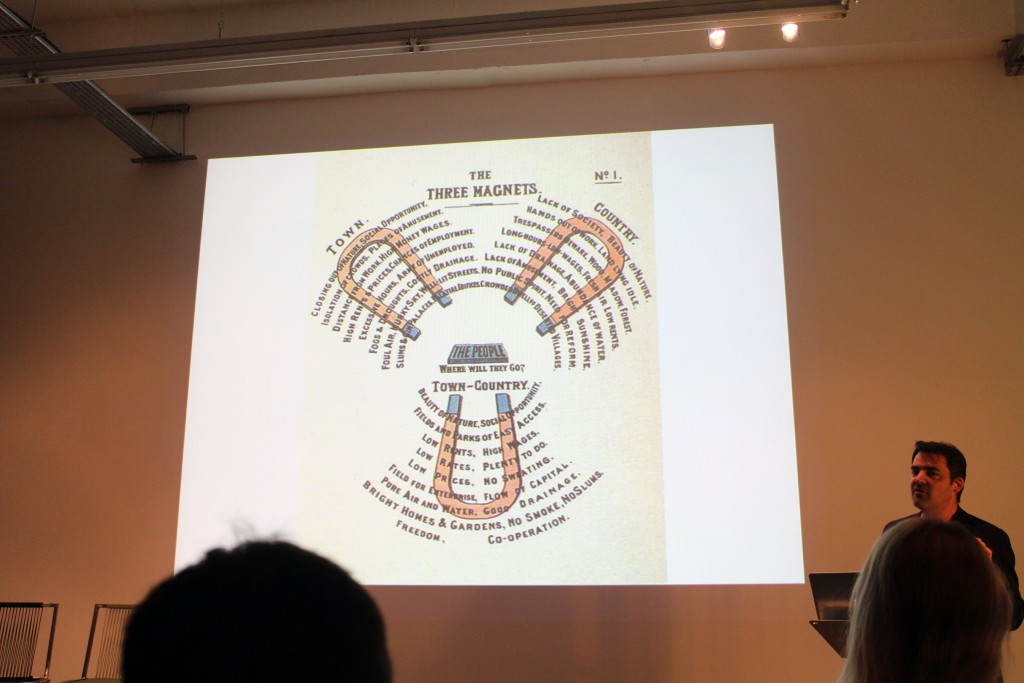 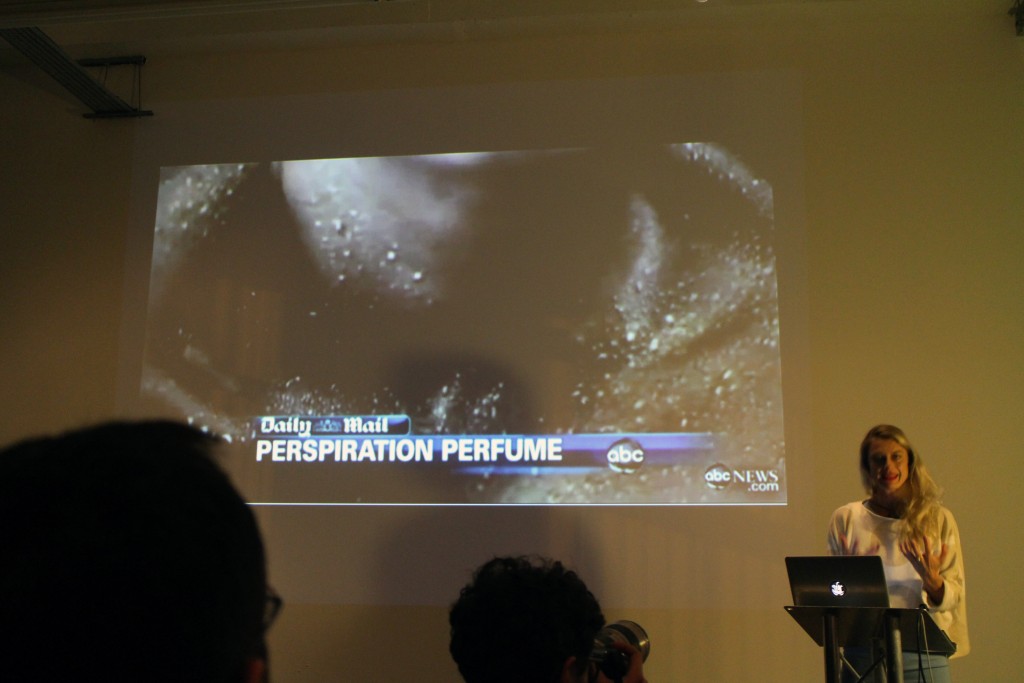 Third speaker of the night was Lucy McRae, a dancer turned researcher/scientist. She began by talking about our relationship with technology and science and how it challenges what we think we know. Lucy explained that we are pushing the limits of the body because technology is pushing us to redefine the limits through gender & identity for example, and how they could be changed and mixed (genetic metamorphosis).

She talked about her work with Phillips and the development of crazy things like a heart rate sensor dress, a material made from washing up liquid and asking questions like what if skin could sprout? What if we looked at the skin as an accessory? And working with Aesop, Lucy looked at the future of beauty and wether we could change the way we shampoo.

She also shared that time that ABC news featured her fictional swallowable parfum as a real product. Allowing you to sweat colour or fragrance, Lucy’s concept was a hit and she received an influx of emails asking to have her product delivered ASAP!  She also received emails from people suffering from hyperhidrosis(excessive sweating), saying that her product was going to change their lives. That must have been an amazing feeling – hopefully Lucy will be able to develop the product & help those people one day!

Currently she is training to be an astronaut, looking at the way that humans are effected by zero gravity. Is there anything that she can’t do? From her studies so far she has discovered that zero gravity can radically change health and bring a sense of calm. In collaboration with Mini Cooper, she showcased her experiment live at London Design Festival 2014 – demonstrating the beauty in feeling uncomfortable. Lucy’s work definitely pushes the boundaries of society, coming between science and imagination. The whole audience were in awe for her whole talk about all of her weird and wonderful experiments looking how to link beauty with pharmaceutical. 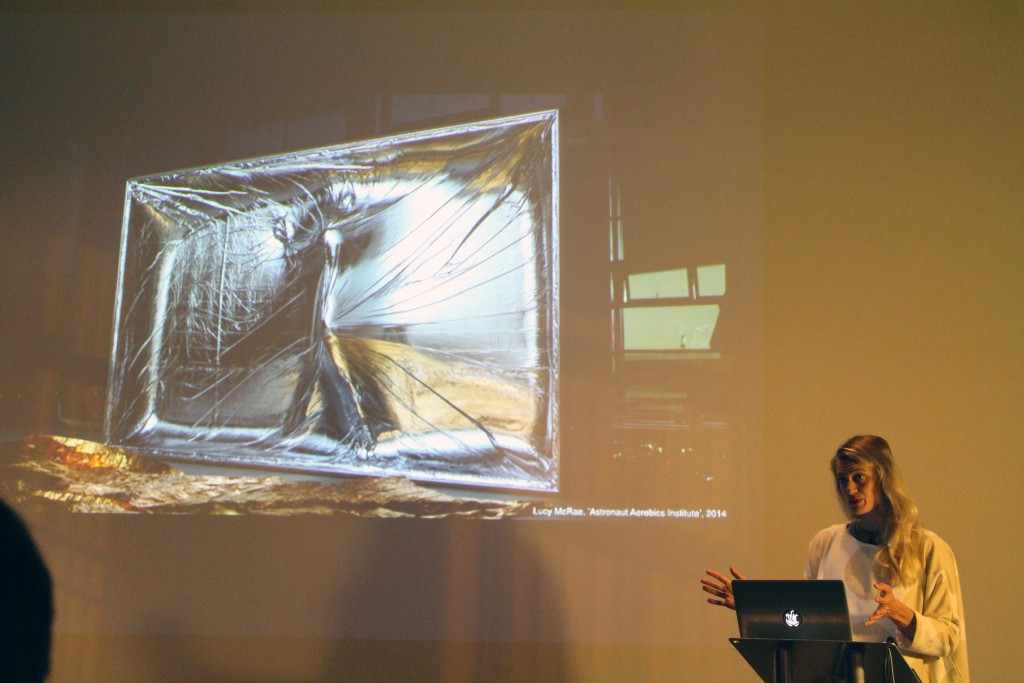 The last speaker of the evening was Daniel Hundt, a HTC creative. As this was the launch of the new HTC M9, he talked about the background of HTC and how they look at brilliance. Describing it as a melting pot of creatives he said they aimed to bring the unexpected together: art & science and business & creativity. He explained that at HTC when developing a new product they have 3 main points in mind, it has to be: simple, human and crafted. Have HTC achieved this with the M9? I don’t know… I’m an Apple girl myself, sorry! 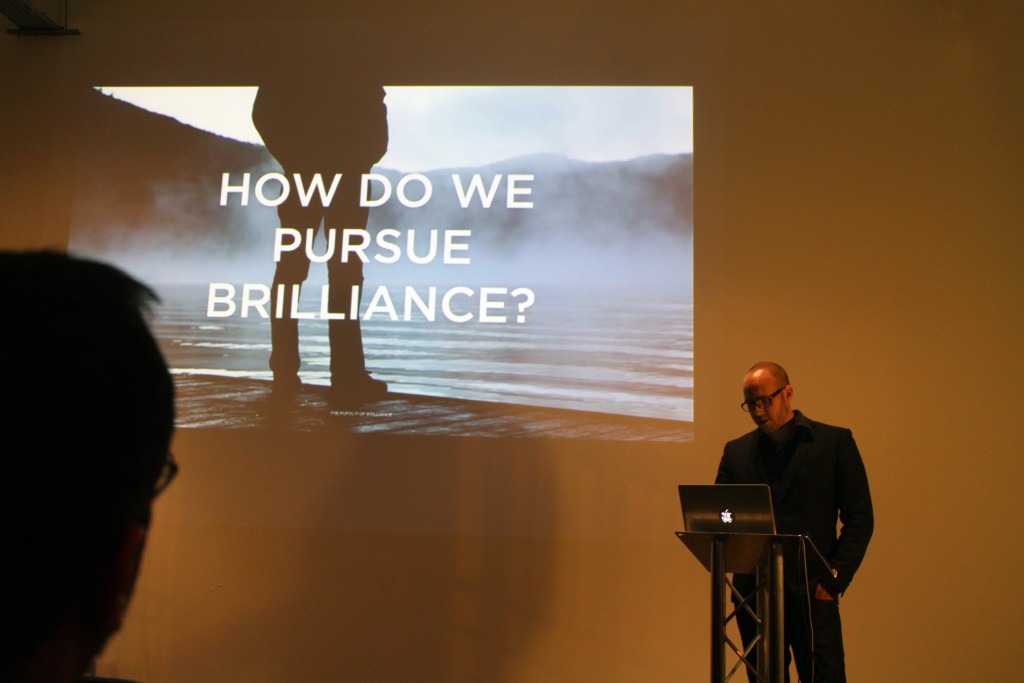 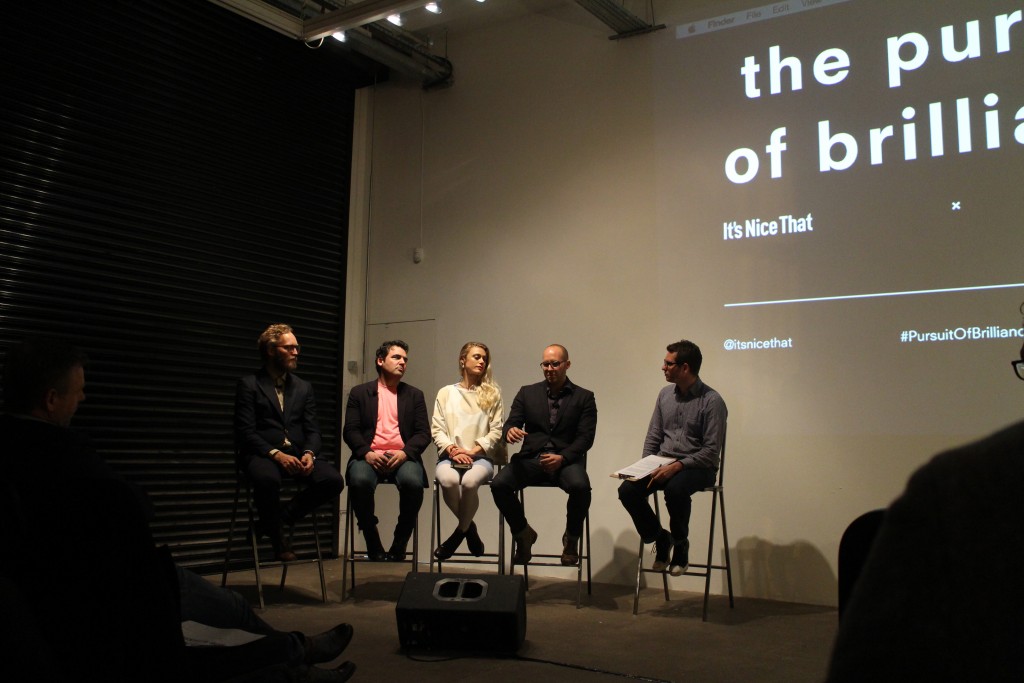 To finish, there was the opportunity for questions.

When do you know its an amazing idea?
Lucy: You forget to eat – that’s a sign of being so interested that you feel like you’re onto something.
Nicolas: When you don’t know what’s going to happen.
Daniel: Make people uncomfortable – thats how good ideas happen. Personal relationships are important; you need trust & room to explore. The best part about design is that you don’t know whats happening yet.
Sam: When you’re totally vulnerable and thinking ‘This is the stupidest thing that anyone have ever done’. But trust in yourself! The people you’re working with have to be stupid; stupid enough to do something nobody else has done before. You have to open yourself up to looking like a dick.

On the process of reaching brilliance…
Daniel: To get to the next level you have to expose yourself to risk
Nicolas: Perfection closes opportunity off. Agreeing on perfection makes it powerful. See design as a journey, you might never get to perfection.
Lucy: It’s about the process – you never know what you’re going to uncover but when it happens its fucking brilliant! (Everyone laughed at this)
Nicolas: iPods – an amazing product but who uses one now?
Lucy: If you have the expectation ‘this has to be brilliant’ an idea is never going to happen.

A massive thank you to It’s Nice That, Nicolas, Sam, Lucy and Daniel. It was a brilliant talk (no pun intended) and really made me think about how brilliant things can come from the weirdest ideas. Push the boundaries and amazing things can happen!