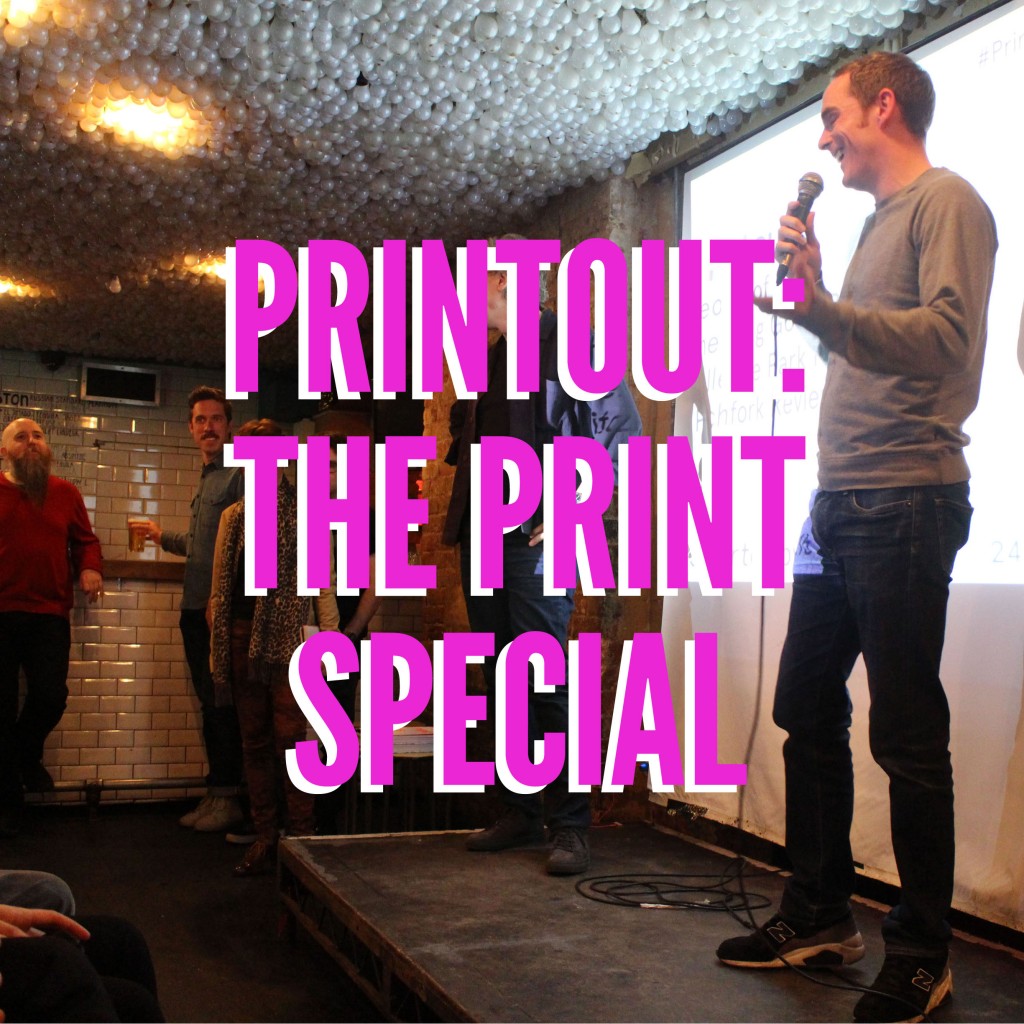 Last week I found myself at the Book Club once again for the second Printout of the year, this time a Print Special. Originally I was going with Sara but she had to work late(boo), so I persuaded Jo to come along and stop me from being a loner.

Hosts Jeremy from MagCulture and Steve from Stack Magazines introduced the speakers and then we were ready to talk print:
1.People of Print
2. The Long Good Read
3. Belleville Park Pages
4. Pitchfork Review 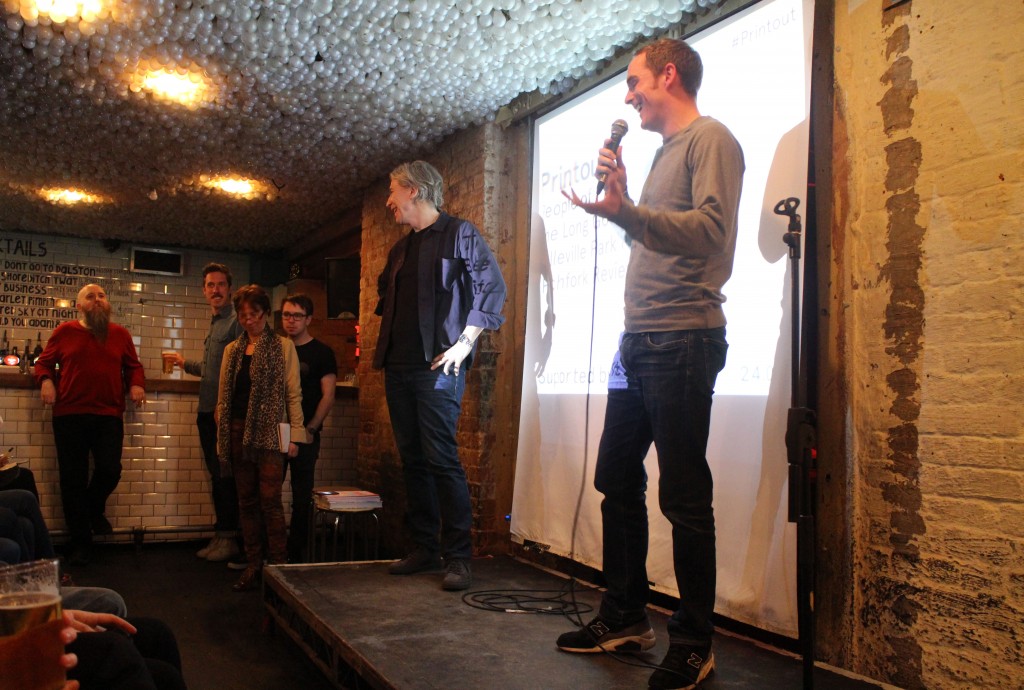 Founder of People of Print, Marcoy began by explaining how PoP began as an online directory of print (a blog). As an illustration grad, Marcroy headed to Manhattan to work in an design agency for a bit, and returned to an influx of emails from people wanting their print work to be included in his directory. And so People of Print was born!

Nowadays People of Print can usually be seen at most print related events in London either screen printing, collaborating with other creatives (you can spot Marcroy in my post from the Anthony Burrill exhibition @ KK Outlet back in November 2013) or talking about the PoP magazine, Element. I attended the Print isn’t dead magazine launch party at the London Graphics Centre and was definitely impressed by the growing support for a new magazine in an age where print is supposedly dying out. Print isn’t dead! 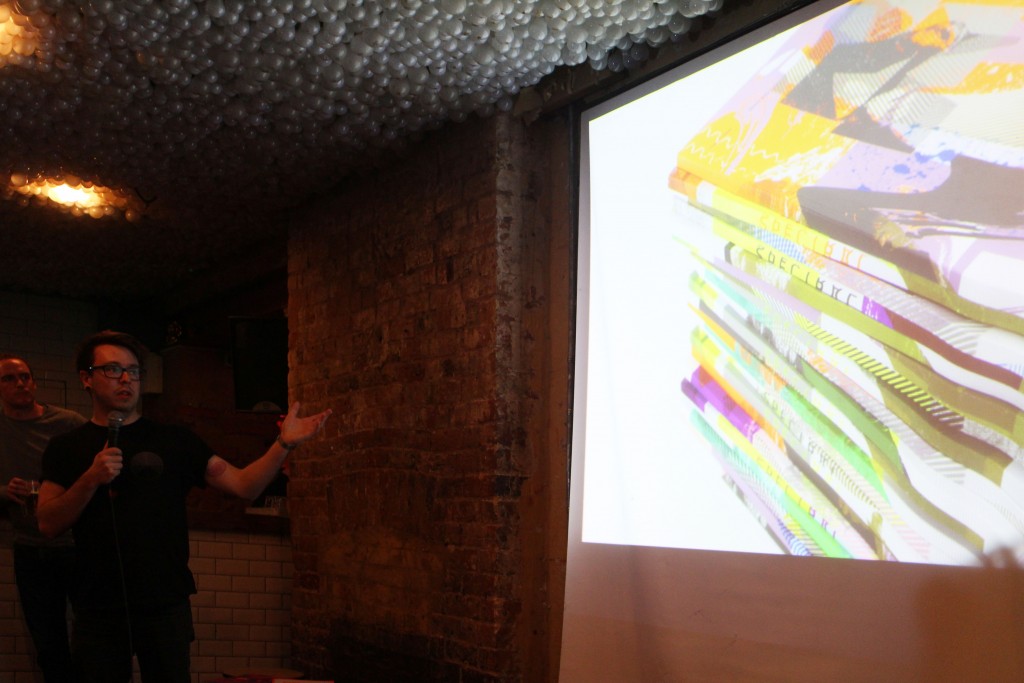 Tonight Marcroy was talking about the latest and soon to be released issues of Element: #2 & #3. For Issue 2, he collaborated with Studio Heretic to produce a fluoro aesthetic for the whole magazine as well as 500 unique limited edition covers. 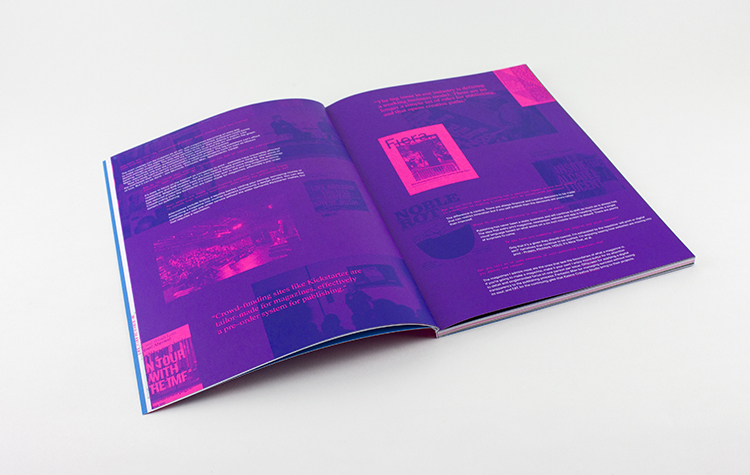 The result is pretty striking, and no wonder as the magazine is printed using 6 colours – CMYK and 2 fluoro inks. For issue #3 People of Print have teamed up with Fedrigoni & HP Indigo Ink to print white ink on black stock and create personalised covers where you can write whatever you want… within reason. 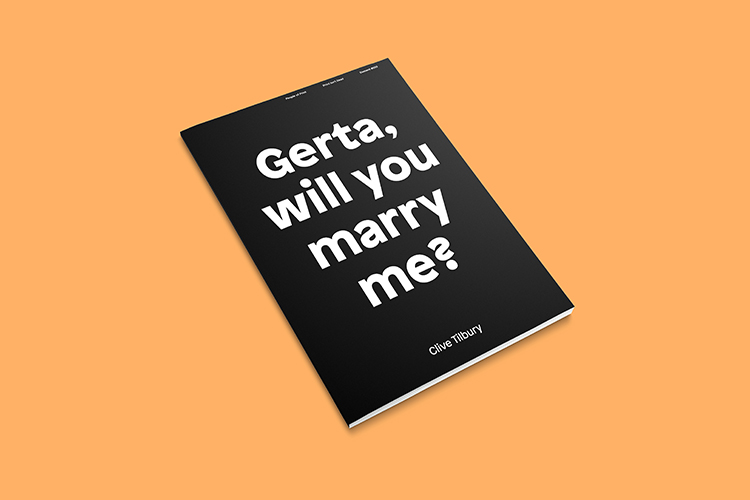 It’s a pretty cool idea if you ask me. I love the idea behind this magazine – it’s fun, innovative and the voice that print needs to help people fall in love with tradition again.

Next to the stage was Dan Catt, a techie who stumbled into the world of print. From producing a newspaper based on Post codes using The Newspaper Club, The Long Good Read was born. Working at the Guardian, Dan was looking at the most popular/best bits of the news and the patterns in the data. The supplement proved to be quite popular and, as a bit of a data geek myself, seems very interesting. 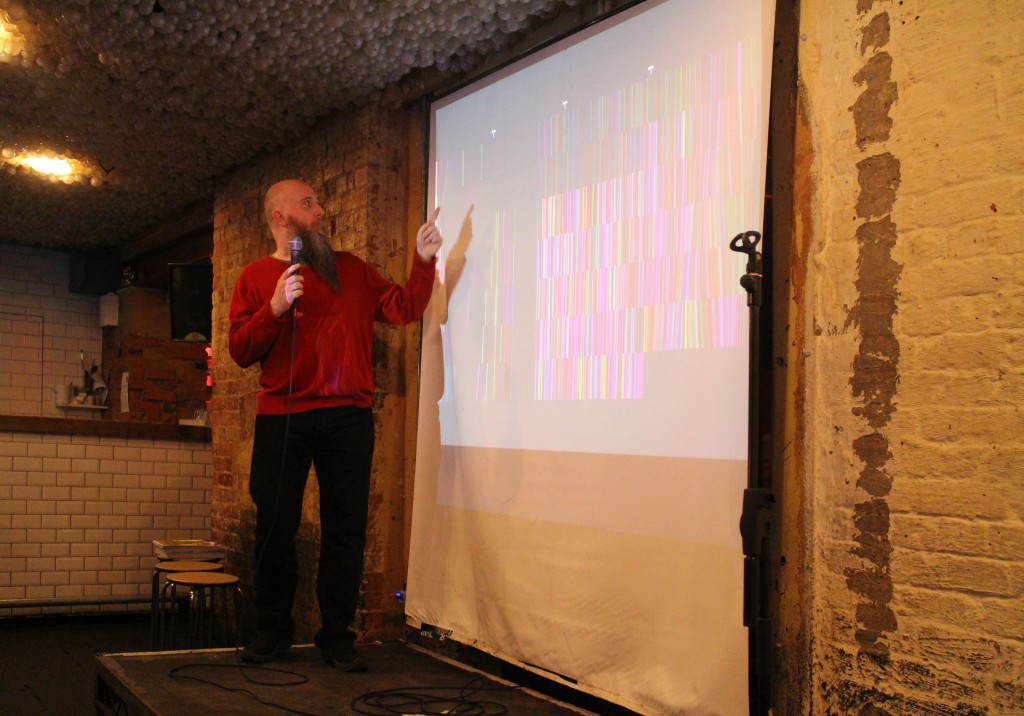 Dan explained that although he knew nothing about design he was able to produce a half decent looking newspaper thanks to Arthur, The Newspaper Club’s online system. 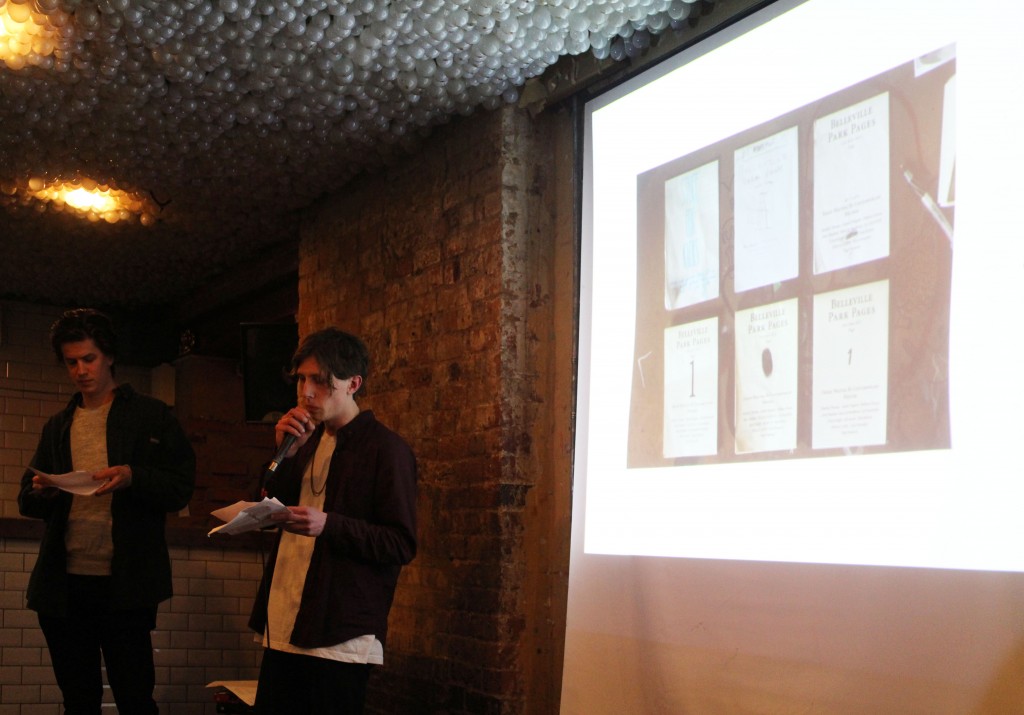 Starting with just 40 Euros in the pot, James and Will wanted to create a platform all about the writing of people who had never been published. ‘Tangible, fresh and accessible’ were the 3 words the lads aimed to achieve with Belleville, and so they agreed that their publication had to be cheaper than a pint to avoid a price barrier. Now stocked in 29 stores in 9 countries, it’s amazing how far these guys have come with their simple idea.

Unlike the focus on the other publications visual aesthetic, the Belleville Park Pages black text printed onto white paper means that the focus is purely the content and priced at £3, is accessible for everyone! It’s a lovely story which proves that with some elbow grease (the first print run was 250 copies, hand folded by James and Will themselves) and determination a great idea can be a success.

The last speaker had flown all the way from the USA to speak – Michael Renaud from music magazine Pitchfork Review. Beginning as an online zine in 1996, the Pitchfork Review is a printed edit of the best articles as Michael explained that online, articles are uploaded so frequently that good content was often being overlooked/lost. 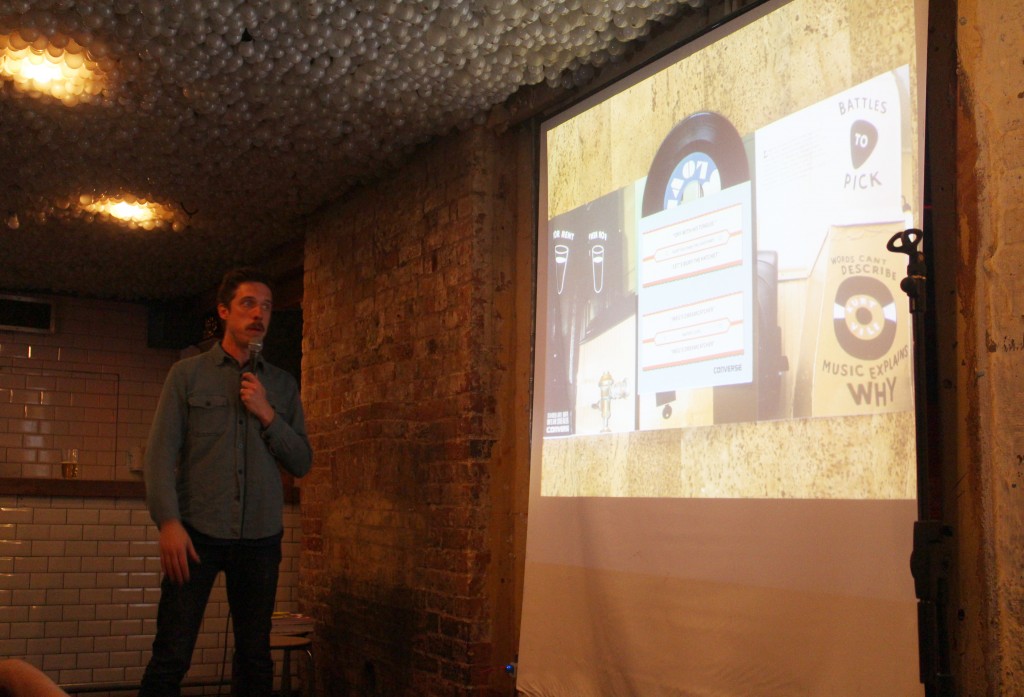 With this in mind the Pitchfork Review wanted to republish the content in a new way, and so the magazine is created to be timeless and something that would be collected, loved and kept to come back to years later. An investment like vinyl, it definitely makes sense as a magazine for music lovers.

Michael explained that the cover of the magazine was deliberately kept simple and free from clutter so that it would look good at every size, even as a tiny thumbnail on the internet, and so the double gatefold cover unfolds to reveal the stories.

There was a bit of time at the end for questions, and I was eager to find out why People of Print’s magazine Element, which focuses on print with the tagline ‘Print isn’t dead’, is available to download online as a pdf. Marcroy explained that this was a decision made to enable the magazine to reach a larger audience, which I understand but I feel kinda goes against the principles of the magazine.

Again, a great talk from Printout – the room was rammed with print fans eager to here about ink and paper. If you enjoyed reading this then I’d really recommend attending future events if you live in/can make it to London because at £5 a ticket it’s a bargain! Keep an eye out on the Eventbrite page, but if you can’t make it the guys record every talk as a podcast (which I am trying to find a link to).

Do you plan to attend future events? Maybe you went to this talk – what did you think to these magazines? Let me know which is your favourite publication from the evening and maybe I’ll bump into you at the next event?