Tuesday evening I headed to the For The Love of Music Videos talk at Somerset house with Jo, Sophie, Ben and Kev. First we stopped off at the Secret 7 exhibition which via twitter Jo had persuaded Somerset House to keep open for a bit longer – power to the people!

We didn’t have long though & whizzed around the 700 vinyl covers. And if you’re a creative and/or a music lover and you don’t know what Secret 7 is, read up on it right now! 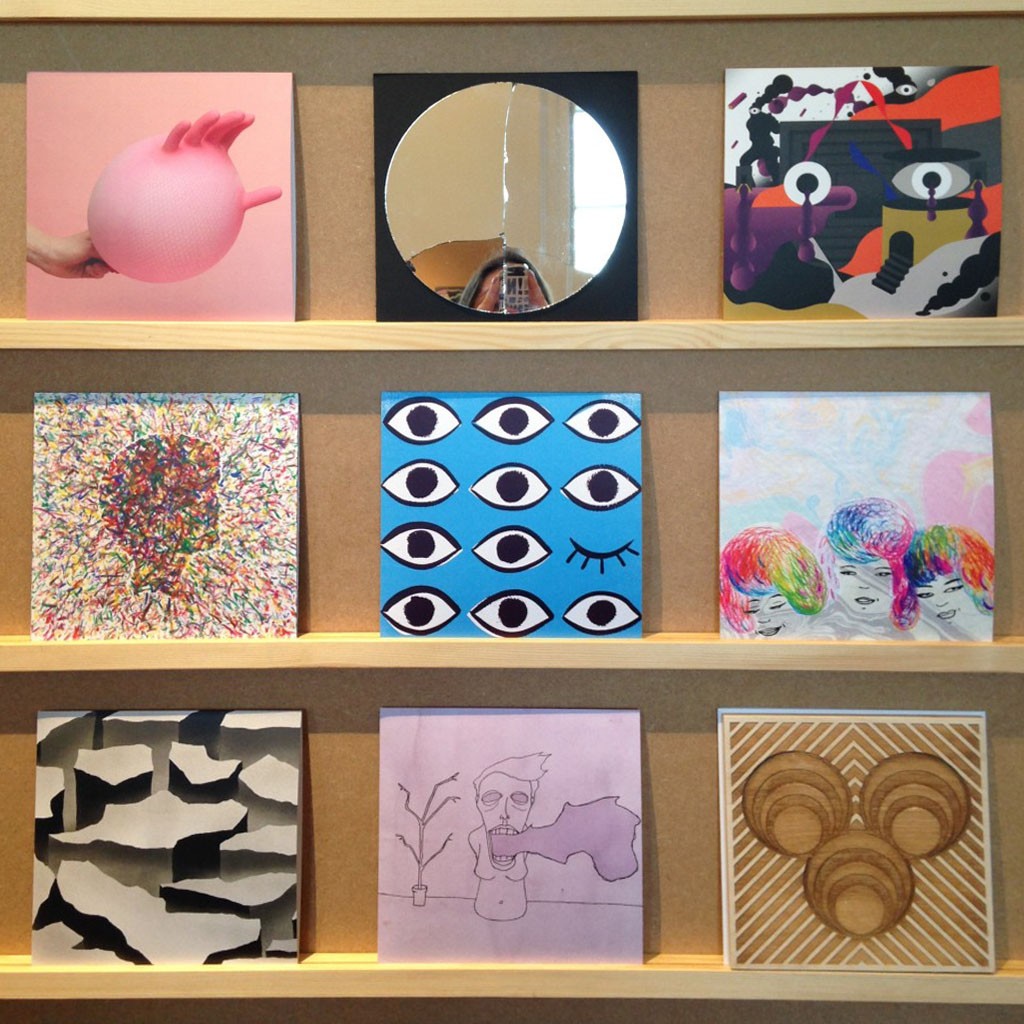 A yearly event, creatives produce & submit a 7″ vinyl record cover design themed on 1 of 5 songs. The Secret 7 team sort though 1000’s of entries to decide on an edit, this year it’s the top 700. All covers that are deemed the cream of the crop are displayed anonymously and then auctioned at the end of the exhibition for £50 each. So you could buy something by Paul Smith or by a regular Joe like me.

Anyway, back to the talk – the line up included a variety of people involved in the making of music videos. First to share the story behind a Benga video were Us Studio – Chris Barrett and Luke Taylor. Chris and Luke shared the whole process from initial concepts to prepping and shooting. The guys explained that they wanted to use the shape of the music to create a sculpture showing the beat and tempo of the music using vinyl records. It sounds like it involved a lot of maths working out how many records they would need to represent the music, and then they had to put it into production with difficult job of sourcing the 960 records, persuading someone to cut the vinyl down (without burning or scratching or just generally trashing it) and assembling it all onto a bar (which had to be strong enough to hold everything. 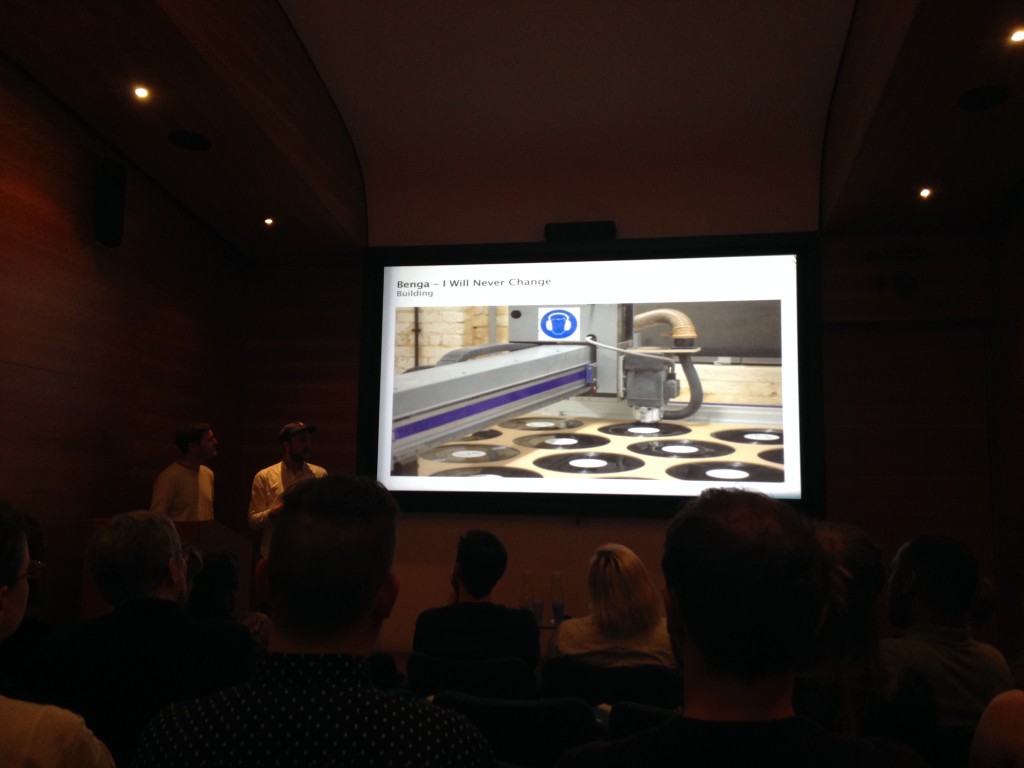 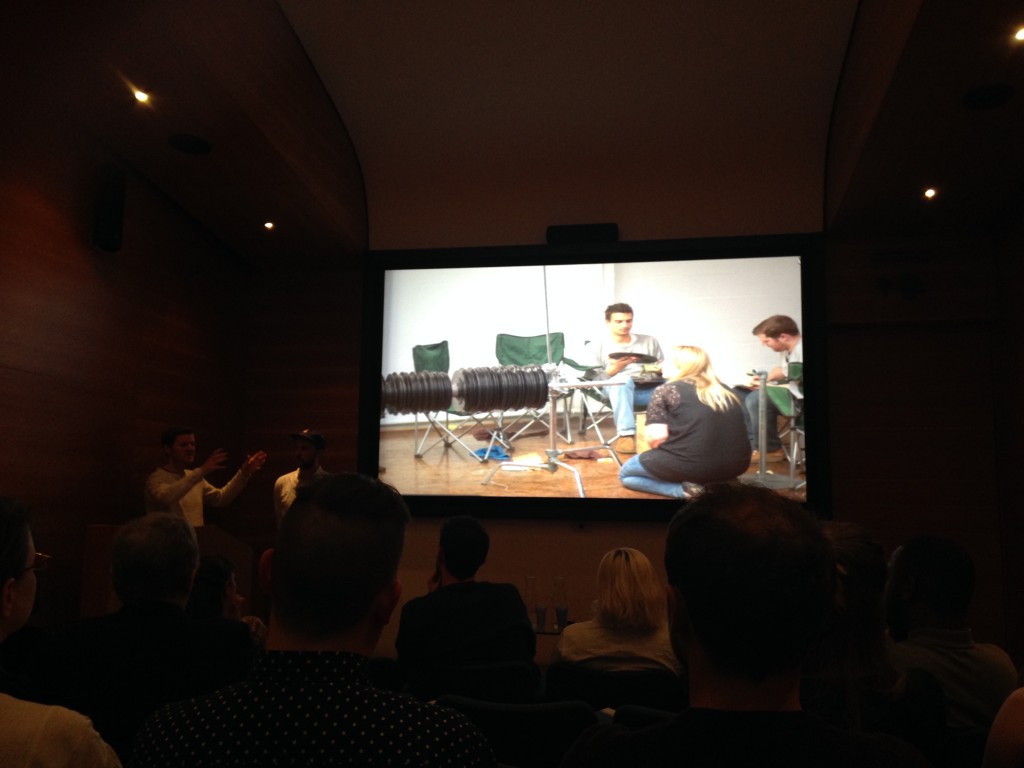 The process is something that I completely related to as a creative and I was very intrigued and amazed to see the behind the scenes making of because, well, I’m just nosy like that! And it turns out that after all of the polishing and creating a thing of beauty, the sculpture was actually built to be destroyed because the only way they could make the animation was to take the records off the pole and smash them. The removal of the vinyl took 4 days to shoot, and the guys shared their technique – they used fake nails! The finished video is AMAZING:

From the other side, James Hackett from Virgin EMI, shared his experience of commissioning music videos for 10 years. He used Jack & The beanstalk as an analogy for the way that music videos work – you have the cow (the artist) that you take to the market and hope you’ll get some magic beans (ideas) in return.

James explained that often he found that it is always the success of music videos that is shared, but that there was another side to things – when music videos go wrong! It was really funny but unbelievable to hear about the making of a high-profile music video. James couldn’t share the band in question, but with a £250K budget we knew it was a big ‘un. Without revealing too much he explained the process including paying £200K of the budget to the director without a contract or a script, the nightmare of the director being stopped at customs and refused entry to the country, being locked in a studio in the middle of shooting the video and the reason to why after all of the bother and panic, the video was scrapped.

IMAGINE THE STORIES – it sounds like such a cool but majorly stressful job! 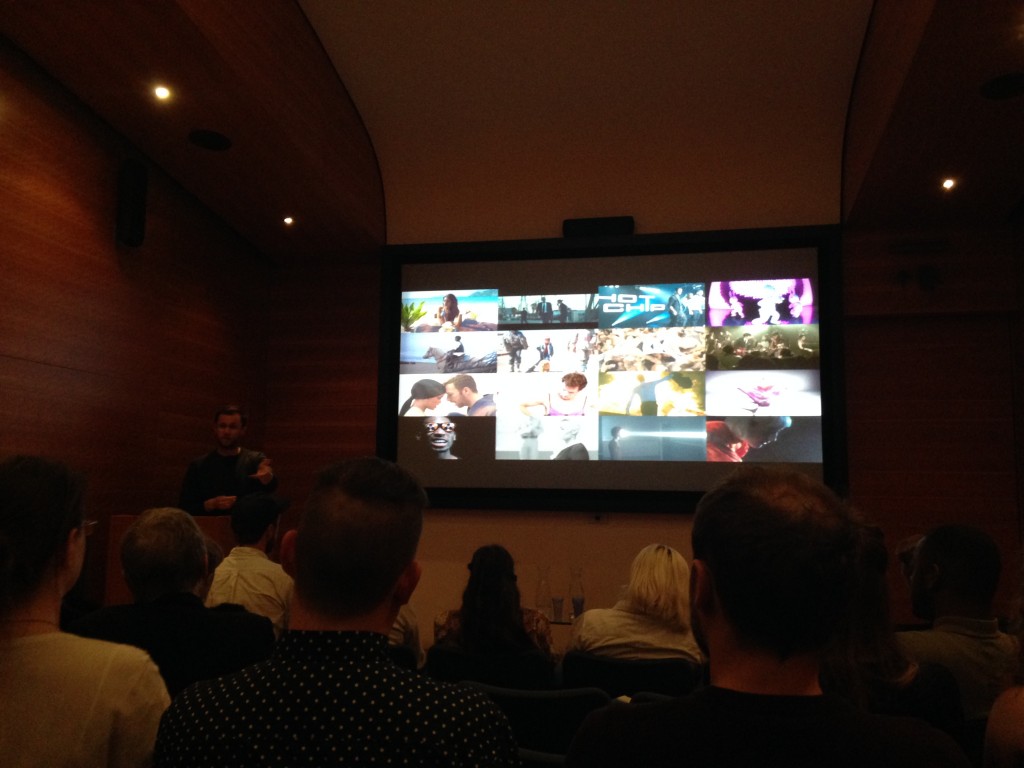 Next to share another side to the music video story was  Daniel Brereton, a director. Initially studying as a Graphic Designer at college, Daniel began by shareing how he got into making videos: ‘I wanted to make people laugh at college, but also my tutor said my drawings were shit’. Daniel explained that he makes videos to:
– Share ideas
– Explain my point of view
– I want to relate to you

Challenging the stereotype that ‘Being a director = being a knob’, Daniel seemed like a cool guy that didn’t take himself too seriously. And I think that shows in his work too – the video for Metronomy involved painting the band in crazy colours and he said he didn’t ask permission really so hope that they didn’t mind! Watch the video:

Last up wasHanna Hanra, the editor and founder of BEAT Magazine. She explained a bit about what it’s like to interview musicians and shared with us her favourite music video – the random adventures of Rapture by Blondie:

Overall it was a really interesting set of speakers, sharing anecdotes, perspectives and nostalgia surrounding music. It really made me think about the connection that music brings to people across the world and the creativity involved in expressing music and engaging music fans. Thanks to It’s Nice That and Secret 7 for an inspiring evening – here’s to hoping the auction goes well!