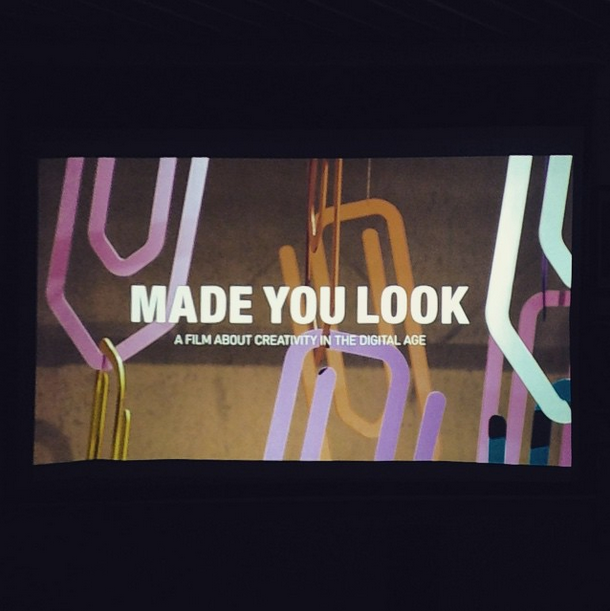 At the beginning of April I was invited to the screening of Made You Look, a film about creativity in the digital age. You’re probably thinking ‘A creative film? This sounds like a couple of interviews just sewn together? I’ve seen it all before…’

I had a feeling that this was going to be different. With interviews from creatives such as Fred Deakin, Anthony Burrill, Kate Moross, Hattie Stewart and Jon Burgerman, I had high hopes for the film by Look & Yes… 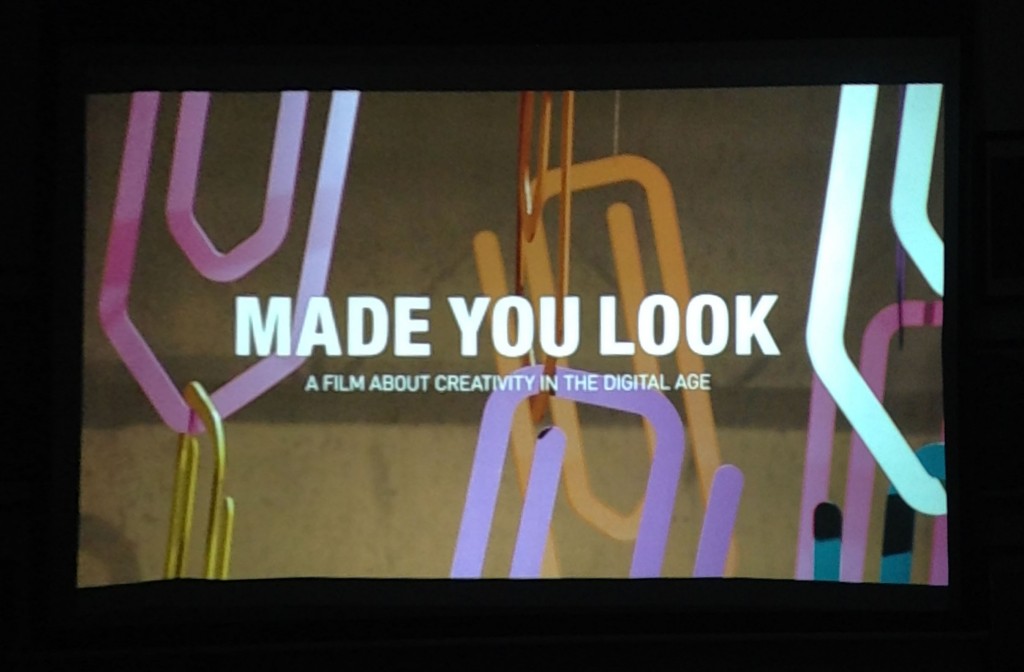 … and I wasn’t disappointed!

As usual I was taking notes throughout (inspiration for later) and I thought I would share some of my favourite quotes(which may not be word for word because my handwritten notes are terrible!) as a teaser and to show you the flavour of the film:

Adrian Johnson: I’d be more than happy if the internet blew up right now.

Print Club London: People want something handmade – not to go to IKEA and buy something not printed by hand.

No Brow Press: Making a book is about making something for generations to come.

Hattie Stewart: When I was younger I wanted to draw aliens – the best thing about it was that no one knows what they look like so I could draw anything!

Kate Moross: Nowadays things are shared so much, people don’t know the author of the work anymore.

Anthony Burrill: At school I was good at Geography and Art. I could have been a Geography teacher but I chose Art instead.

Fred Deakin: If you’ve got the idea, energy & talent, just do it!

Jon Burgerman: Tablets are just like going back to analogue pencils. Paint tubes were a type of technology at once upon a time.

I’m sure you’re intrigued now and wanting more, right?! Made You Look is about the creative process, idea generation, idea development, creative production, illustration, graphic design, art, typography, animation – it’s brilliant. It’s basically an insight into the minds/daily lives of successful creatives and we all want to know what makes them tick. Honestly, I absolutely loved it.

I took my housemate Lucy, an advertising creative, with me as my plus 1 and she loved it too. It just goes to show that it’s a film for creatives in general/ anyone interested in creativity. I don’t think you have to be a designer by profession to enjoy Made You Look at all because the people and the stories are so interesting and overall the film is shot really well – a more formal interview style paired artsy shots of work and workspaces.

I really think that for creatives this is THE FILM to see in 2015!

The film is being screened at Somerset House tonight as part of Pick Me Up 2015 including a Q&A with Anthony Burrill and Ian Stevenson! But of course, it’s sold out, sorry guys! Don’t despair though, because I’ve done some digging and found this tweet from Pick Me Up: 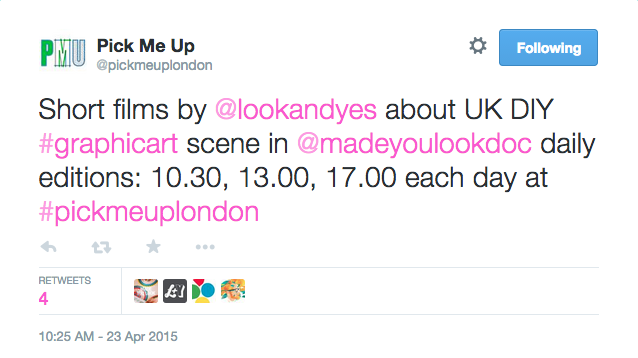 … meaning that parts of the film will be shown at Pick Me Up I’m guessing? And if you don’t happen to catch any of those, the guys are also showing it in a few other places around the country so check out the screening dates. Hopefully the film will become widely available soon because I think it’s important for young creatives to see.

Are you going to the screening tonight at Somerset House? Or maybe you’ve caught one of the short films? Or maybe you can’t make it to London, in which case… which is your favourite quote? I really loved Ian Stevenson – he is SO funny! Let me know who you’re most looking forward to hearing from.