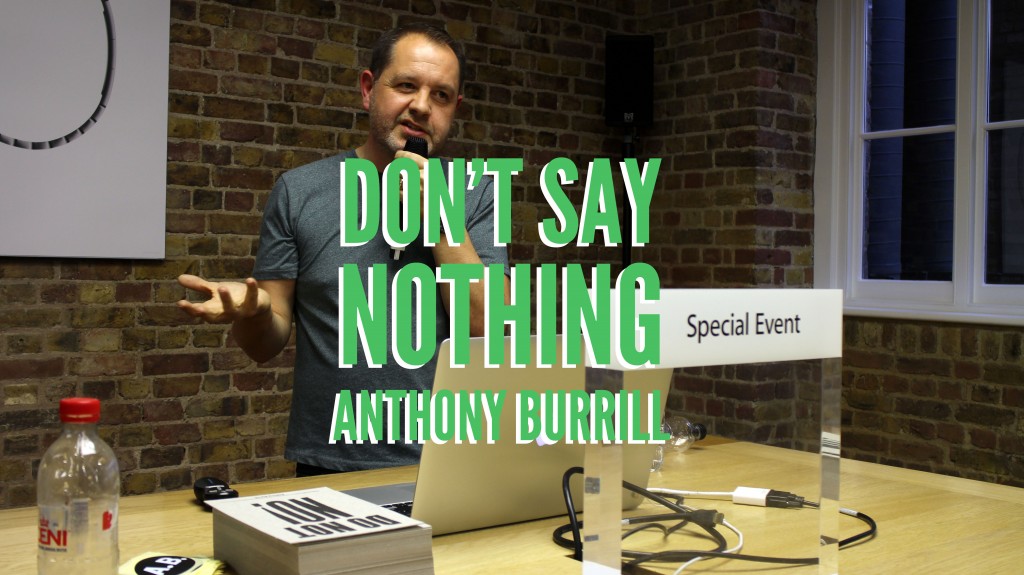 Last night I headed to the Apple store in Covent Garden to see Anthony Burrill talk analogue and digital.

I guess I’m at risk of sounding like a stalker, but I have seen Anthony talk quite a few times – Something to Say at St Brides, Leeds Print Festival and I’ve screen printed with him too at KK Outlet. Why do I like Anthony Burrill so much? Well, I think the work speaks for itself – it’s iconic. It’s the simplicity and communication of his posters – traditional typography with purpose and a modern voice. His work is typographically beautiful and informative, whilst having personality (often humorous) which is quite a hard task. He’s a genuinely nice guy, always has anecdotes to share and he googles himself. AND has no shame in admitting it. (I am definitely guilty of some self googling)

Anyway, on the talk; Don’t say nothing. Anthony began by talking about his childhood and how analogue was king at the time – computers didn’t really exist until he got to college. His interest in Graphic Design was first sparked by The Human League’s artwork and the discovery of Letraset. Making the connection between the two Anthony admitted that it was the ‘first time I realised what Graphic Design was’. Letters and images that could be moved around and applied by rubbing onto paper etc to create Graphics, Anthony explained that they had a Letraset rep visit them at college and he fell in love with it (who wouldn’t!?). Anthony explained that computers didn’t really become a thing until the late 80s/early 90s and even then it was only the real geeks that used them – ‘Cool kids didn’t use computers’. Showing more of an interest in the hand made side of design, Anthony admitted ‘the tutors didn’t really understand me or my work’ which I’m sure a few creatives can relate to. Students know that design education can sometimes be quite subjective when it comes to grading! Sharing a page from his college portfolio he said that it was a phrase which really caught everyones attention: ‘negativity stifles creativity’. I bet those tutors are eating their words right now?

‘I am an analogue brain working in a digital age’

Anthony shared several rounds of work for the famous Hans Brinker hostel in Amsterdam – famous for being shit and proud. The clever copywriting has always made people smile and even though it might be considered to be ‘bad design’ I think it fits in with the overall brand perfectly! I loved the latest Facebook-esque campaign complete with thumbs up and FB ping sounds – check it out! Burrill’s most popular piece is the ‘Work Hard and Be Nice To People’ poster which features in homes, offices and restaurants across the world. Anthony explained that he initially produced 300 copies to send out to his friends as a self promo, but 10 years on and 30,000 prints later there doesn’t seem to be an end to it’s popularity! The simplicity of the wood block typography and simple but clever phrase is what really works and is continued throughout more of Anthony’s work. On the eve of the election it was quite funny to see that even David Cameron is a fan of the poster… 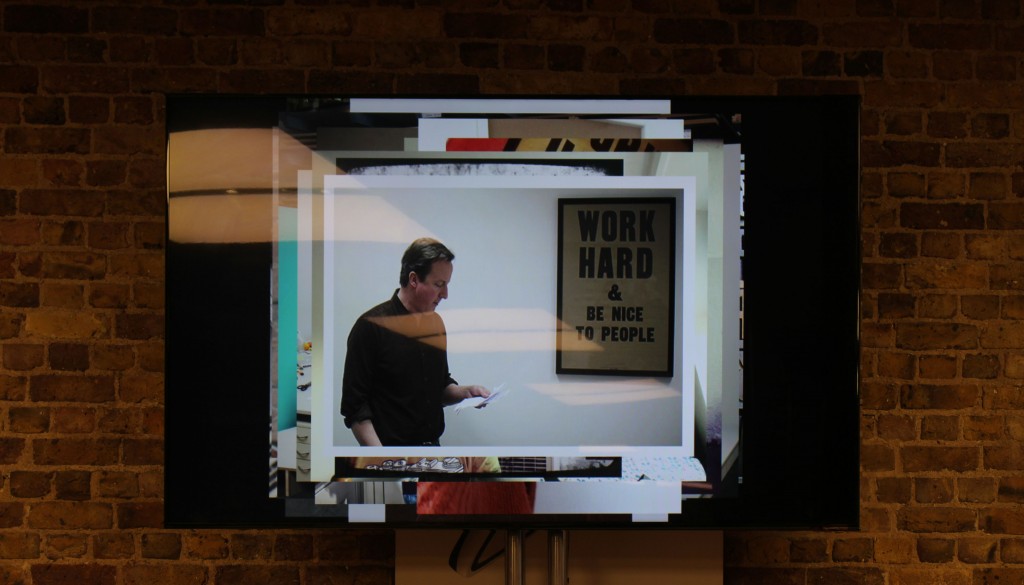 On collaborations, Anthony showed fluoro posters printed by Colby in LA, ‘Work hard and be cool with the people’ with Grafica Fidalga in Brazil and also luxury brand Hermes which came as a surprise to me. Working with two other creatives Anthony produced a simple illustration turned animation as an installation for the opening of the Hermes store on Rodeo Drive. It was pretty mesmerising… all those shapes and colours and palm trees! 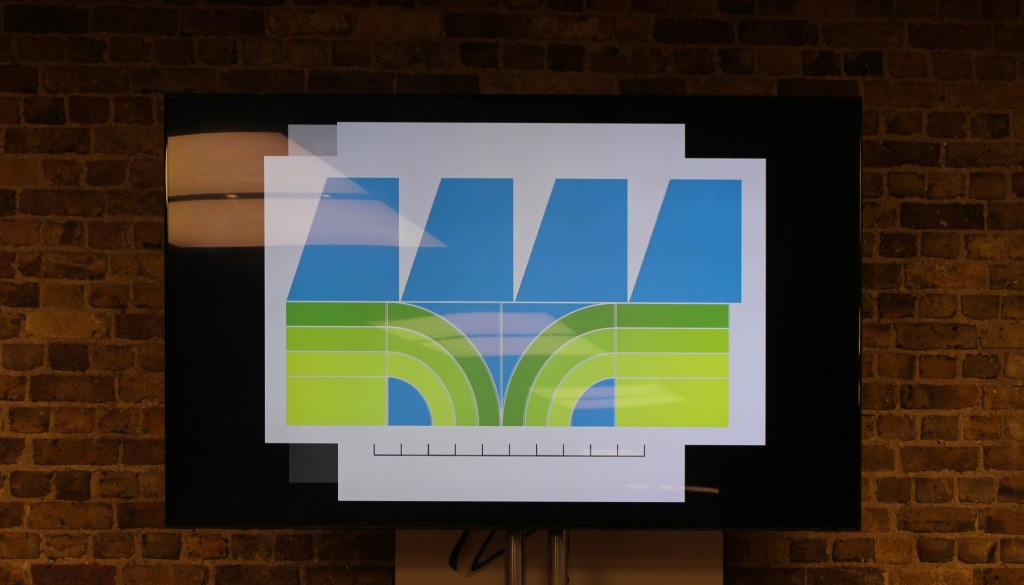 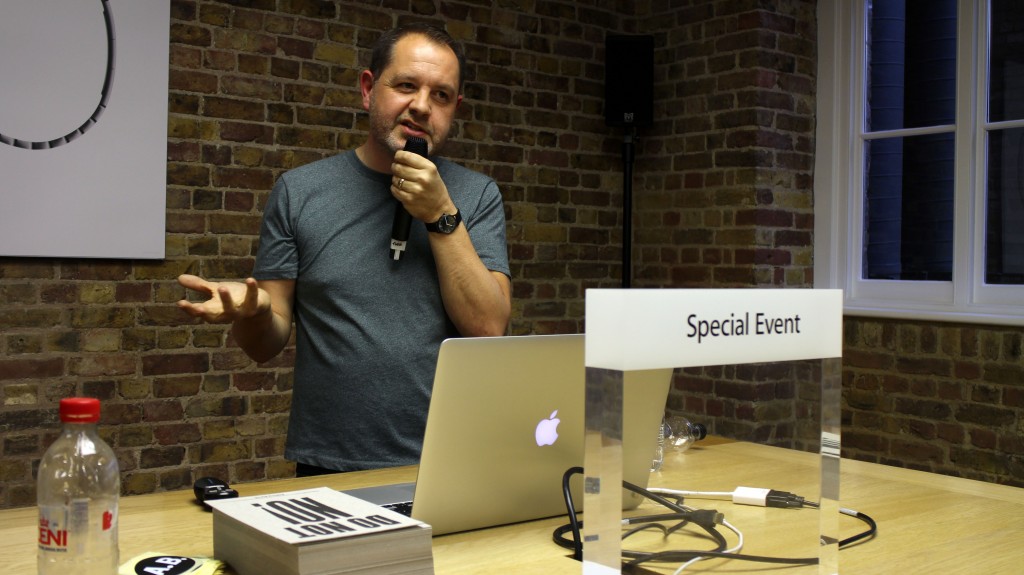 After the talk there was a bit of time for questions. When asked about how he felt about his moral responsibilities, Anthony explained that he believes Graphic Designers have the ability to communicate and should use that for social ideas. ‘I’m just interested in things’. On analogue vs digital design he said ‘technology makes it easier than when I started. Who knows what will happen next? Bring it on.’

It was great to hear Anthony talk again so thanks to him and to Apple Covent Garden for putting the talk on (and for free!). And then I ran home to vote! 🙂

Are you a fan of Anthony’s work? Maybe you own one of his posters? Maybe you’re not familiar with it – do you like it? Let me know what you think!