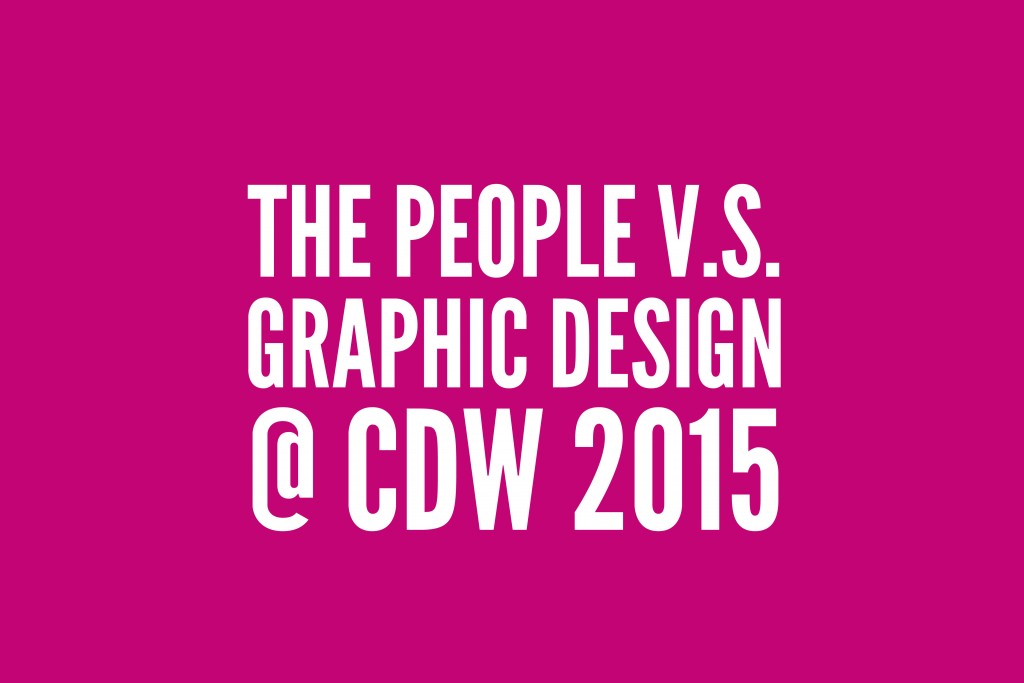 Well look at that – it’s almost June and time for Clerkenwell Design Week again! After attending CDW for the first time last year, I was underwhelmed by the lack of Graphic Design represented at the festival showcasing Interior Design, Textiles, Lighting Design, Product Design, Architecture, Innovation and Technology. You’d think that Graphic Design would be a good fit amongst all of that, no? Anyway amongst the 2015 line up I was happy to discover a talk: The People vs Graphic Design. The talk was scheduled for lunchtime, and after some persuasion our Boss agreed to let all of Team Graphics attend – we don’t get the chance to go to of talks/events as a team.

I was really looking forward to the talk, and I wasn’t disappointed: 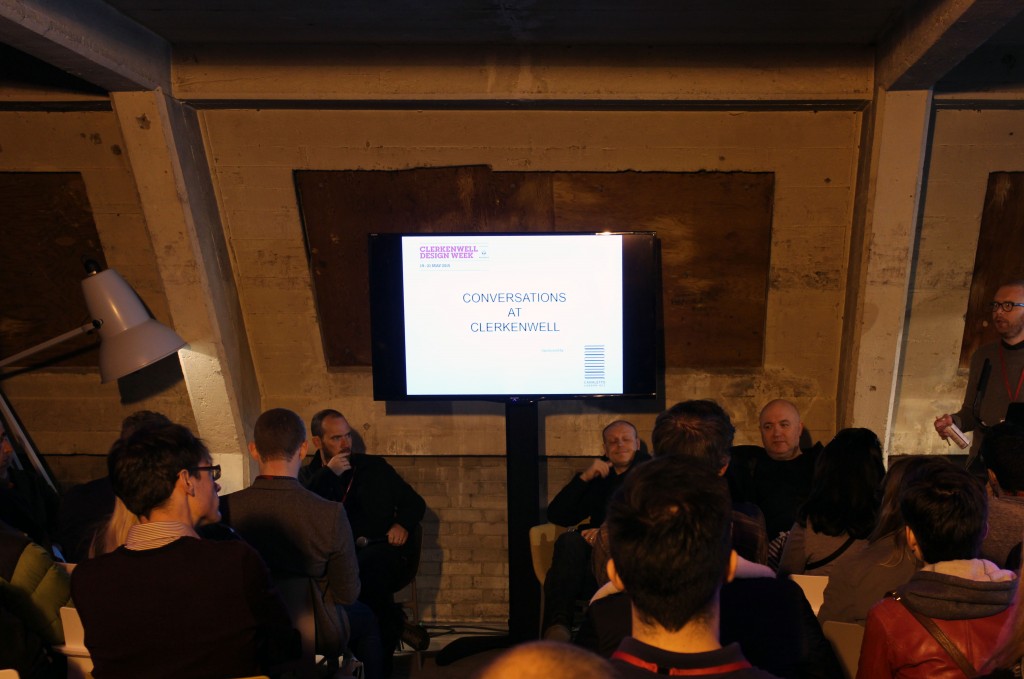 Discussion was prompted by questions on designing for the public, how involved the public should be in the process and a few other design related tangents. Stood at the back, I was noting quotes and snapping away as per usual so I wanted to share some of my favourite quotes from the designers. (I can’t 100% guarantee these quotes are word for word as my notes are quite scribbly – I need a dictaphone, but you get the idea! Read: Designers don’t sue me if I’ve misquoted you slightly!) My comments are in bold italic and I’ve used initials as a key for quotes in the order of the discussion; TB: Tony Brook, JB: Jonathan Barnbrook etc…

On consideration of the public

TB: ‘There are always 3 people involved in the design process; the designer, the client and the people looking at it. It’s about people being visually interested, engaged and entertained by design.’
‘A big part of my life is trying to keep things (ideas) out of the waste basket.’

JB: I don’t know what they want or what I want either.
‘Do you really want to do this?’ to Bowie about The Next Day album cover.
‘To keep design interesting you have to disregard what the audience is expecting; think about what is right and what isn’t right.’
‘A lot of the time public spaces are product design focused, e.g. benches which aren’t comfortable for people to sit on.’

JS: ‘Design is always thinking about the end user, but it’s also as much about entertaining yourself – it’s a personal investment.’
‘Hoardings should be wonderful to walk past rather than a CGI image & a massive phone number. I should be thinking ‘I’d like to look at this!’
‘You don’t ask people if they like it at the end – it’s how they feel.’ 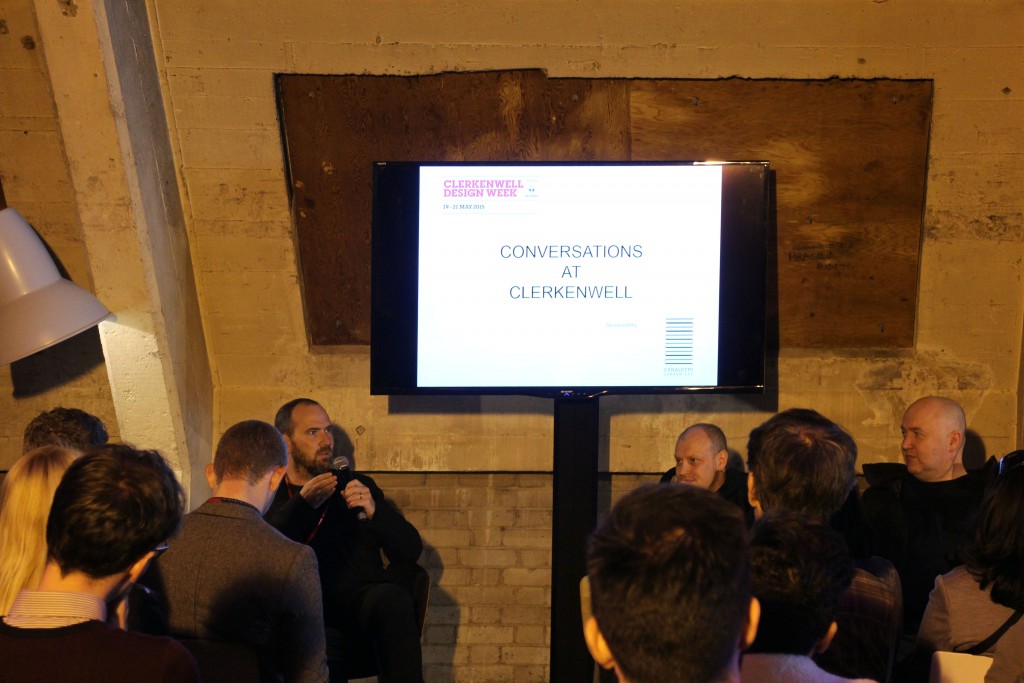 SH explained that as her work is mostly self initiated, she works without a client. Sarah has just published a book and runs workshops/’experiments’ introducing non-designers to the world of fonts; ‘It’s asking people to respond’.

Having taken part in one of her experiments last year at London Design Festival myself, I wasn’t surprised when she explained that some of the results are unexpected;
SH: The Bauhaus font, considered cool and iconic by designers, is seen as a comedy typeface by non designers.

PM: ‘I design for other designers, which I see as a privilege, but it’s not easy. Producing work for an informed, opinionated audience that doesn’t necessarily like it, and isn’t afraid to tell you that. You have to stay up to date with industry.’

JS: ‘It’s hard to design for designers, but don’t go out and ask what they want or they might as well have done it.’
‘Don’t design something badly because it will be gone in 3 months – books will be around forever. Always design to the best of your ability at that moment in time.’

JB: ‘Whatever I do a large part of the world will be fucked off about it – a creative representing another creative.’ (On designing for Bowie)

TB: ‘It’s making the best thing we can with the material given’

Talking about the longevity of design, TB referenced Paula Scher who began her career designing record sleeves, later moving into environmental graphics. The record sleeve designs are most remembered even though they are now considered ‘out of date’.

JB: ‘Design is an intellectual exercise in pushing Graphic Design forward. It’s part of solving the problem  and producing a response.’

PM: ‘Looking back at design from 25 years ago with different social context.’
‘Looking back at the redesign of Blueprint magazine now, I wouldn’t do the same. The brief has changed.’

TB: I have a bottle top collection which is beautiful. It’s throwaway ephemera but somebody took time to design the bottle caps and someone thought they were worth keeping.

SH: ‘I shouldn’t admit to this, but I designed the PJ & Duncan record cover’ 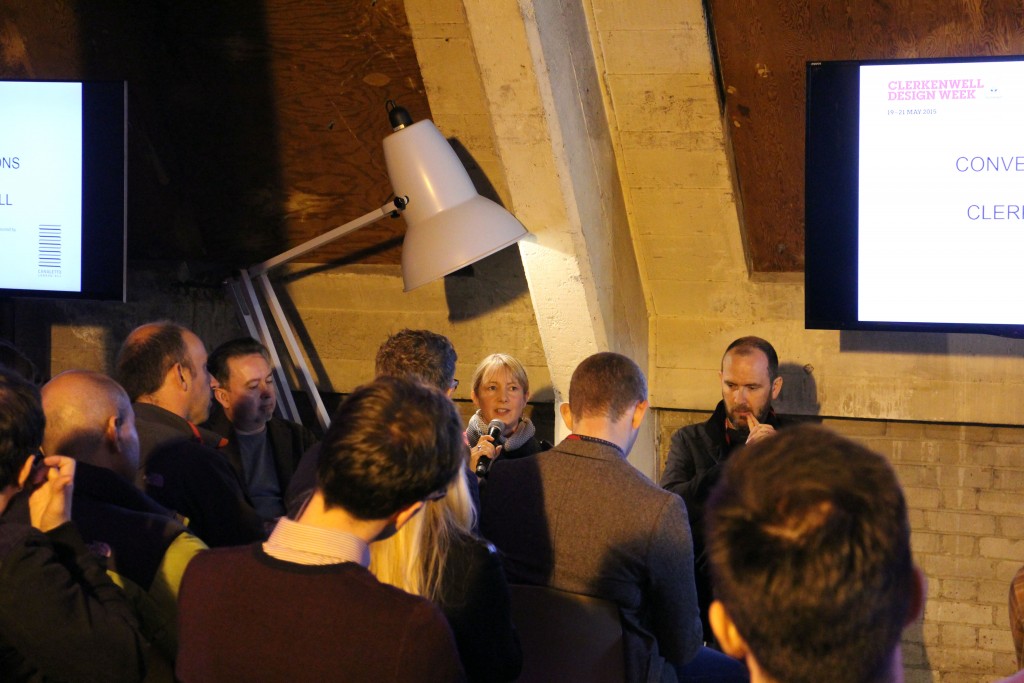 TB: ‘UCA branding sparked backlash from students, created a change.org against it, pointing out you could make swastikas if you rearranged it.’

JB: ‘I’ve learnt not to respond to twitter because you could be defending yourself for days.’
‘Criticism does hurt but you can take on board the comments and learn from them.’

Jonathan mentioned comments on Creative Review posts about his work being harsh. I have often thought the same and that it is usually a case of  keyboard warrior syndrome – a snide remark with no context from the comfort of behind their screen. Designers always seem to be fighting each other, a bit like school kids?

PM: ‘Graphic Design is only ever criticised in the public eye: the best example of this is the London Olympics logo. People saying they/their 5 year old could do better.’
‘Graphic Design only makes the headlines when people see it and have bad things to say. Design is there all the time but not celebrated.’
‘People don’t really understand Graphic Design. That is the bottom line.’

The discussion turned to something which I am ALWAYS struggling with: nobody knows what Graphic Design is. Do your parents/grandparents/siblings/friends know what Graphic Design is, because mine don’t. ‘I’m a creative blogger; covering Graphic Design, Art, Culture…’ ‘So what do you blog about?’ I am constantly justifying/explaining what Graphic Design is to everyone. And maybe I’m not that great at it, because people don’t get ‘It is everything’; it’s too abstract. So I explain is it road signage, logos, packaging, billboards, adverts, books… everything! I’m not saying it’s EVERYTHING as in it’s the most important thing in the world btw, but it is pretty essential for communication in the modern day.

JS: ‘London doesn’t really have anywhere that specifically celebrates Graphic Design. There was Kemistry gallery, which was always rammed at an opening of an exhibition, which proves there is a demand for it, but it was tiny. You don’t see Graphic Design at the Design Museum, it’s just chairs – Graphic Design is like the poor cousin of Architecture and Fashion.’

SH: ‘In Fashion there are personalities – these people are celebrated and admired by the public. We don’t have that in Graphic Design.’

Sarah asked a group of GD students studying at a Fashion college about the difference between Fashion and Graphic Designers. They said they thought it was ‘because you don’t see Graphic Designers on catwalks (well, obviously) or presenting their work’.

JS: ‘But it should be about the work, not the designer?’

The panel start to lead the discussion towards designers talking about design:

JS: ‘The level of discussion in industry is thin.’

JB: ‘It’s something that needs to be taught to students.’

TB: ‘I was told that I should be ashamed.’ (About the UCA identity)

SH: ‘Maybe we need to show more of the process behind design?’

JS: ‘But is that interesting?’

I find this interesting because recently I have been filming (SPOILER ALERT) ‘A week in the life of a Graphic Designer’ video, to which my Senior Designer Jo’s sarcastic reaction was: ‘Well that will make thrilling viewing’. I’ve finished filming now and admittedly, I don’t want to ruin it for you but, it is probably going to be a 3 minute video of me typing on a keyboard, moving some shapes around a screen, adjusting kerning and excitedly cutting some paper. I still think it’s important for students to see it though – it’s not always glitz and glam! Watch out for the video (because I’m sure you’re all really excited for it now 😉 )

TB: ‘I don’t think the culture is there to listen to that.’

SH: ‘It’s about how you engage non-designers – helping them to understand design using other means; e.g. taste and personalities.’

With some time for questions from the audience, the ywanted to know: Should the public be more involved in the design process? E.g. ideas presented to public and they vote on the outcome they want.

TB: ‘Identities grow on people. New is not familiar and that scares people – they are conservative and worried about change.’
‘All of the research and testing with people should happen before designing.’
‘Design withdrawn based on twitter comments – how can a twitter comment change the whole reasoning and design journey of an identity that was right one day, and wrong the next? You get comments like ‘My 15 year old could have done that’!’
‘Identity Design is like Music – 3 stages of listening:
1. Don’t get it.
2. Warming up to it.
3. Best thing I’ve ever heard’

The tables then turned; the panel asked the audience ‘How can more Graphics be displayed/appear at Clerkenwell? Is it the right environment? How would you do it?’ Somebody suggested wallpaper, however I don’t agree that would be the best representation of Graphic Design either!?

So what are my thoughts on the talk? Not long after getting back to the studio I tweeted:

This talk FINALLY put a spotlight onto many issues which I have been discussing with people, thinking and struggling with for a while. Did you go to the talk? What did you think to the discussion? What’s your overall opinion on Graphic Design’s relationship with the public? Answers on a postcard (or below in the comments!)…

I usually leave a talk feeling passionate, energetic and fired up, but I found myself more motivated than ever before. This talk really got my heart. I’ve been wanting to write a post about my role as a creative blogger amongst a sea of fashion bloggers for a long time, and although it will be hard, I think it’s time. Watch this space…