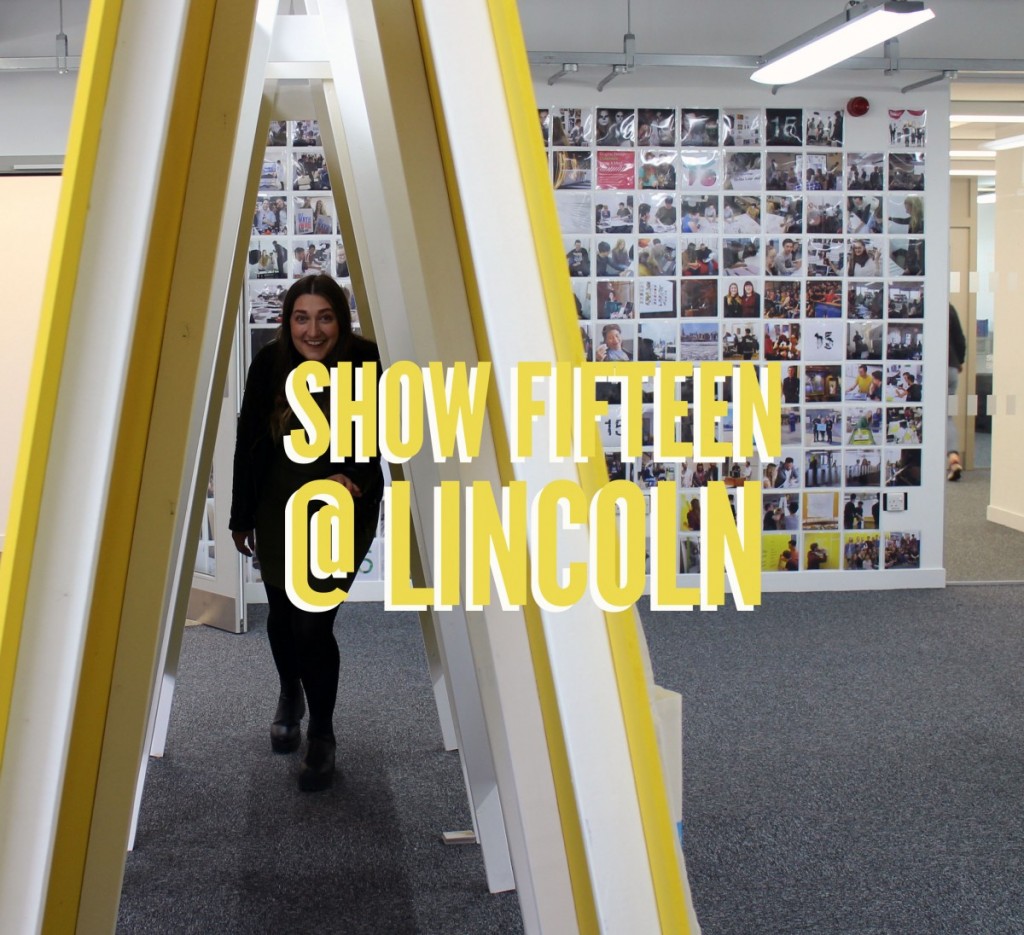 I can’t believe it’s been 2 years since my degree show/graduation, time flies… As mentioned in week 8 of #100daysoftriangles, I popped back to Lincoln last week for the annual reunion – the degree show! Show Fifteen had been causing quite a stir online with their humorous/weird GIFs, so I was excited to go back and see how all of these little caterpillars had turned into butterflies. 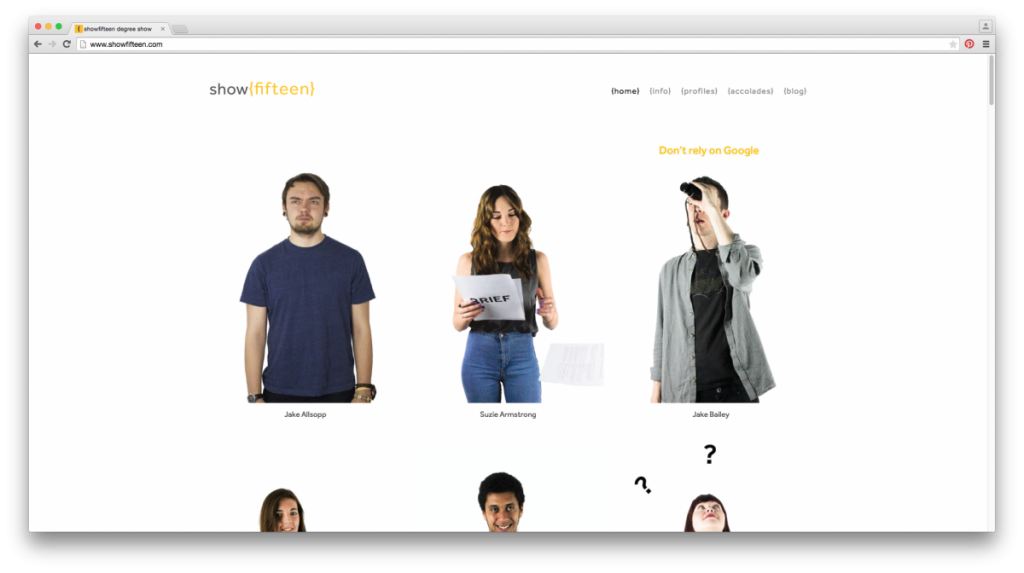 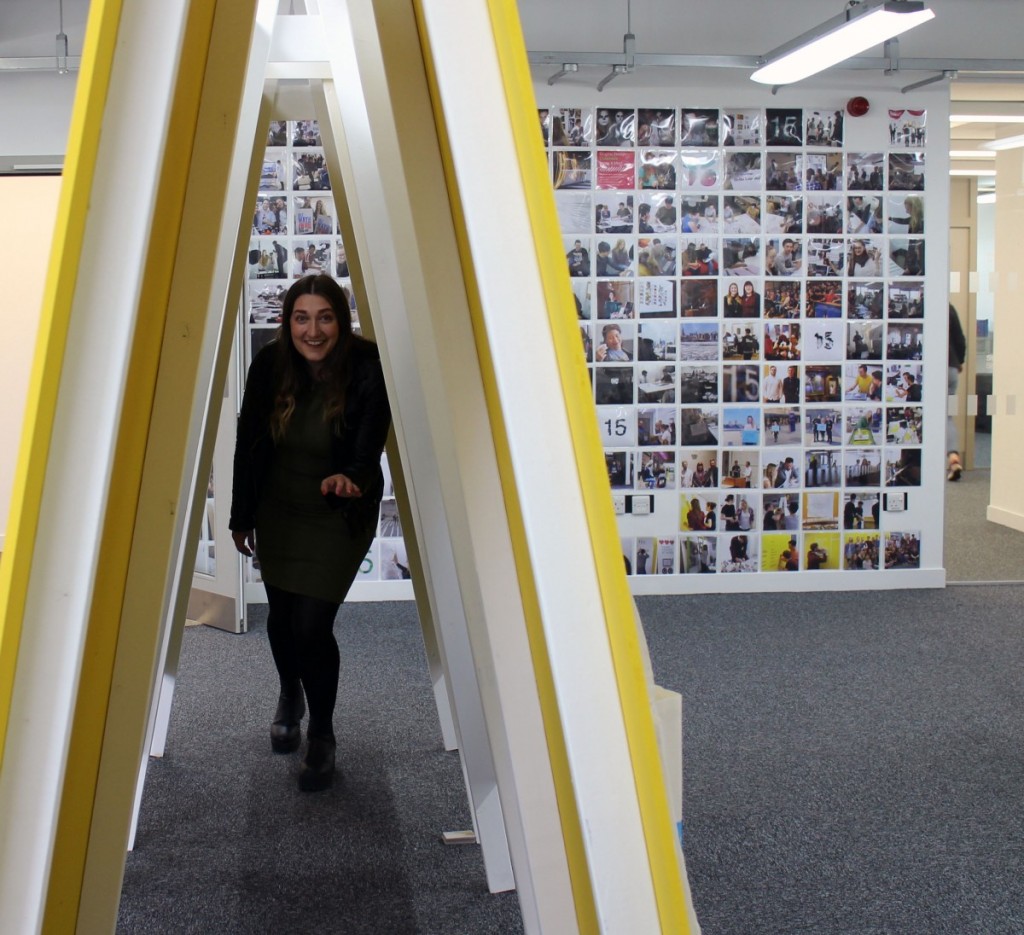 From the hidden depths of the yellow unknown, I’m bringing you the scoop… Although if I was an under cover reporter I definitely failed my mission! There were so many friendly faces wanting to chat that I only managed to move a few steps the whole night and didn’t really see any of the work. I went back in the morning though, obviously.

As always there was a massive, heat inducing crowd eagerly awaiting Barrie’s speech. Having witnessed 4 now, I’ve discovered that although it always contains a number of usual Barrie-isms, it means more every year. Every year spent away from Lincoln makes me realise how brilliant the bond of our little family is. I didn’t really realise the strength of the bond until I spoke to other grads who questioned the what LSDT meant and why I was going back to do a talk. Sure, the new AAD Building is not a patch on the character, history and memories of Thomas Parker House, but somehow it always feels like I’m coming home. (Soppy but true!) 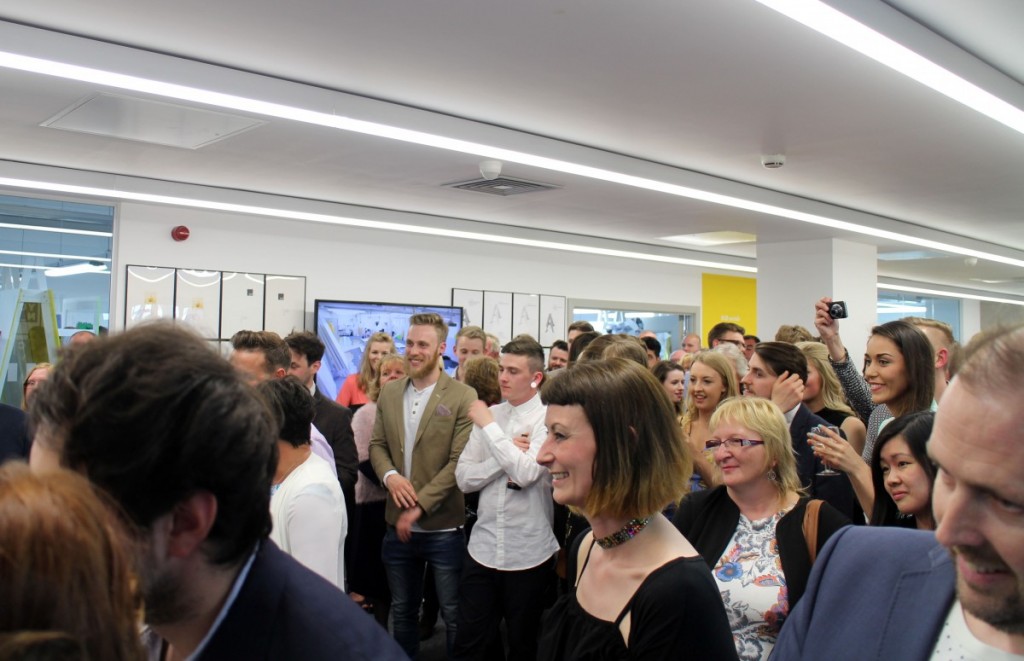 Of course it was also time for new LSDT intake. With it being the first time I’ve been able to contribute to the goody bag the pressure was on, so I went with triangles, colour and memories – the class of 2015 is the last year that had been taught in TPH to graduate after all. This year we welcomed 4 new students; Connor Robertson, Katherine West, William Timney and Emily Butlin, as well as and 2 staff members; John Dowling and Matt Smith. ISTD may have killed our dreams, but it hasn’t dampened our spirits – I’d much rather be a reject anyway 🙂 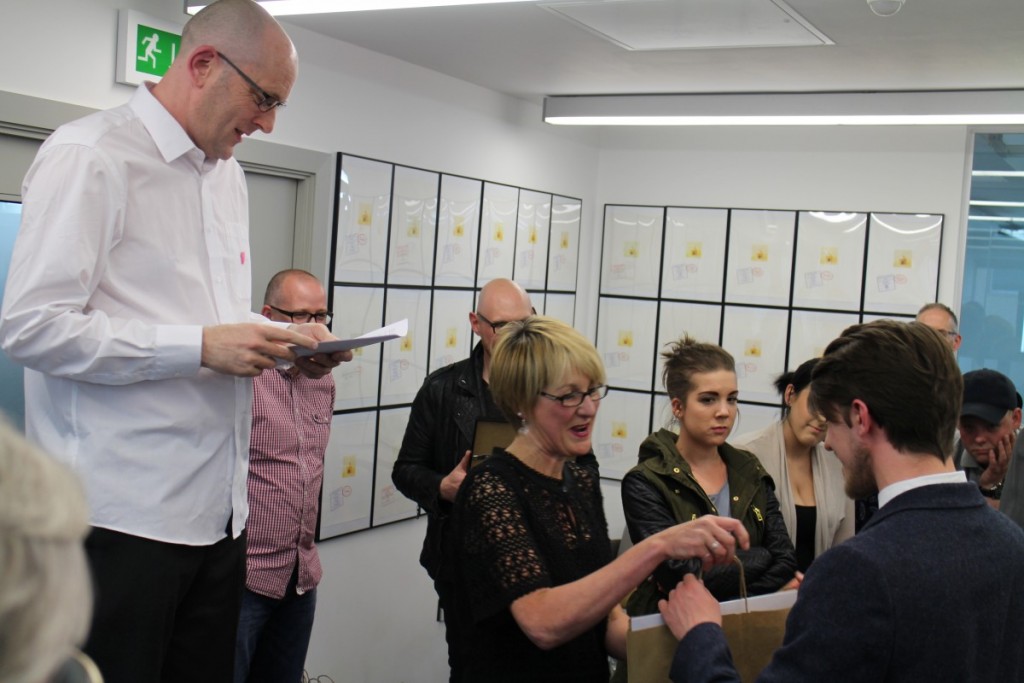 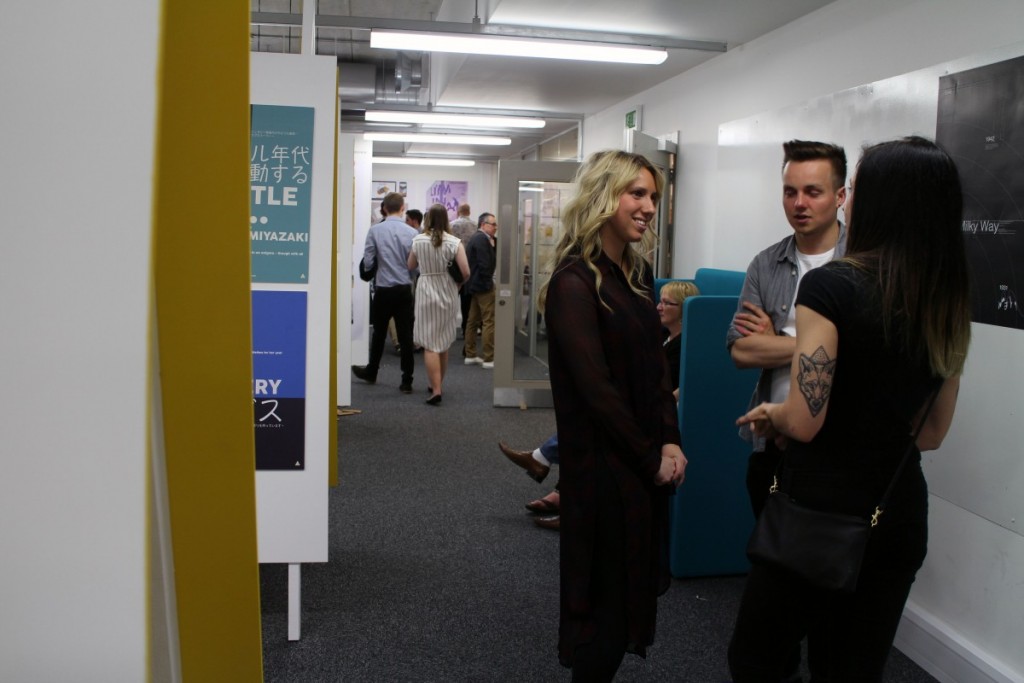 That’s pretty much all of the photos that I managed to take that evening, but here are a few silly ones stolen from Sophie: 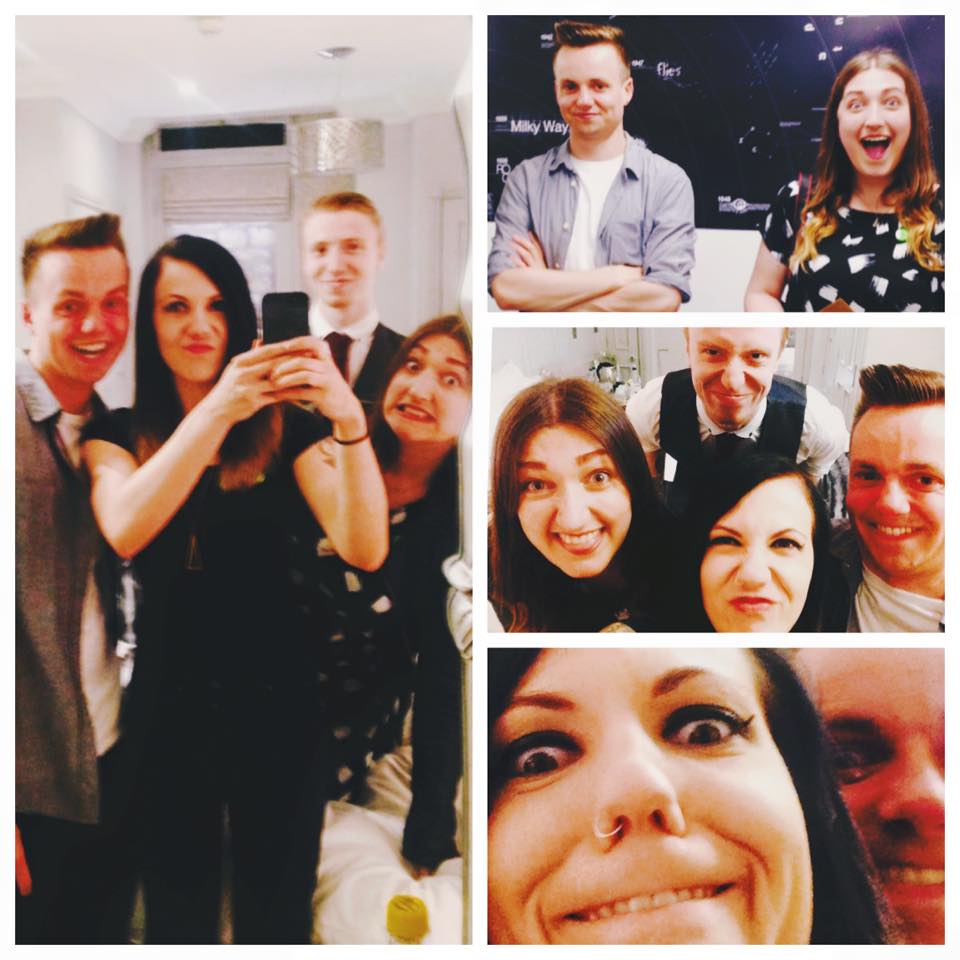 So after a hearty Superbull-cancelling fry up, we headed back to actually look at the work. With all the students nursing their hangovers, it was very peaceful in contrast to the night before. There are probably some haters, but I love the bold choice of yellow and the use of it throughout the show (just look at those A-frame boards!) and branding – subtle hints mean that it stands out but isn’t too in your face. Thinking back to Show Thirteen, we used grey aka boring, dull and safe… yawn!

Publications are always a strong point from Lincoln, and 2015 is no exception to the rule. Some people believe that print is dying but I still stand by the smell of ink; there’s nothing quite like being able to feel nice paper between your thumbs. 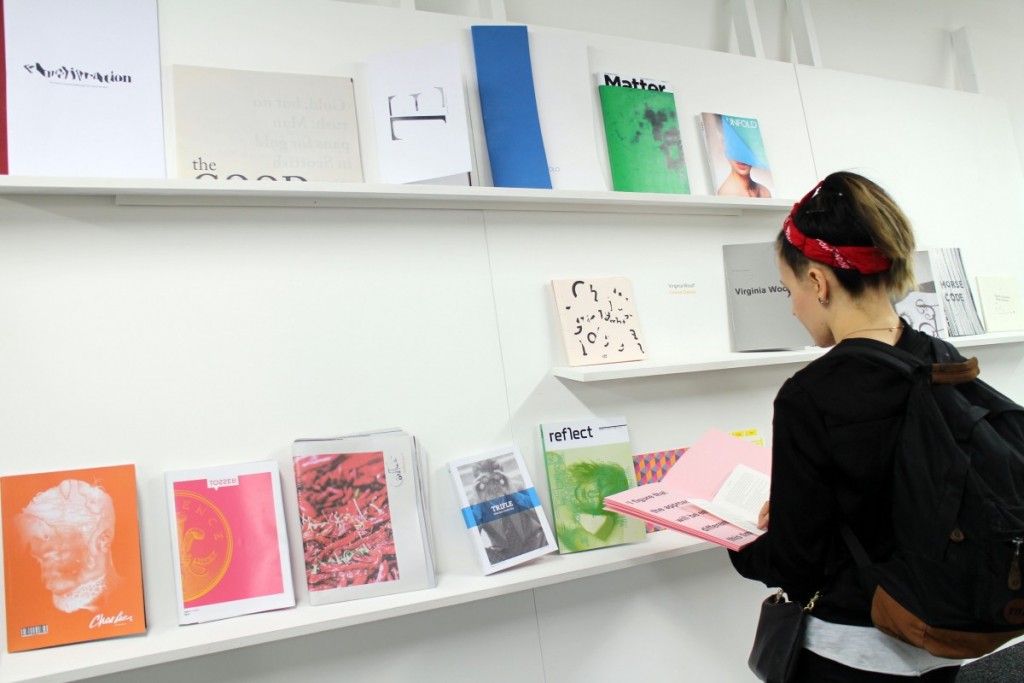 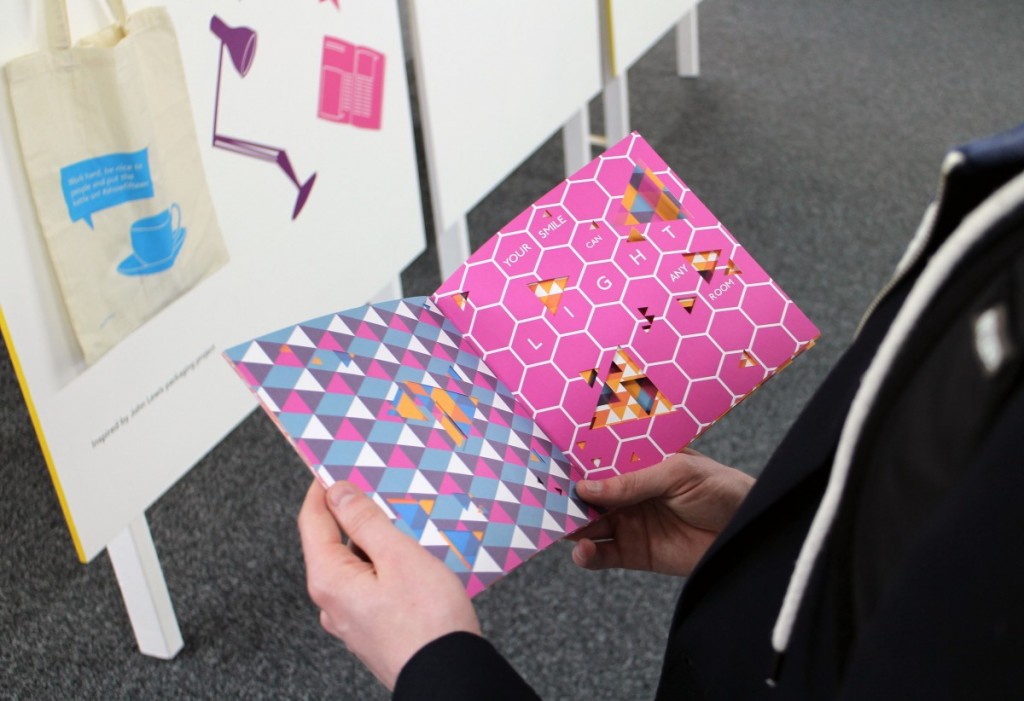 I found a fellow triangle lover in Emma Thompson & her lighting company branding. 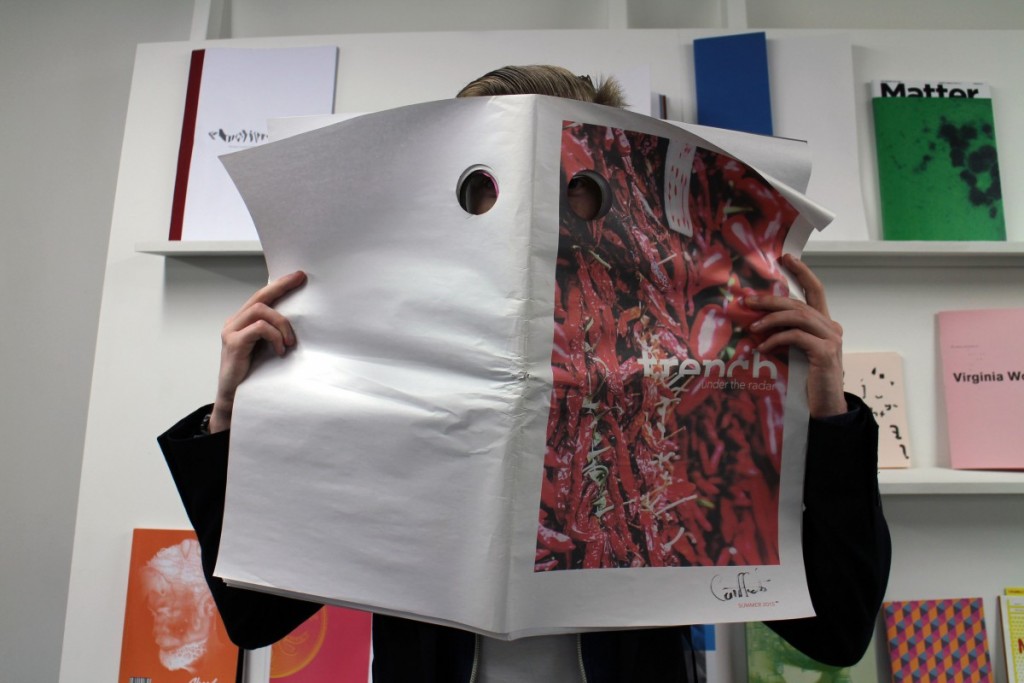 A magazine that caught my eye came from Nick Cruse, Matt Causbrook, Liam Richardson & Tonelle Madsen – LOVE the eye holes so that you can hide behind the newspaper and watch everyone! See more of Trench on Liam’s website. 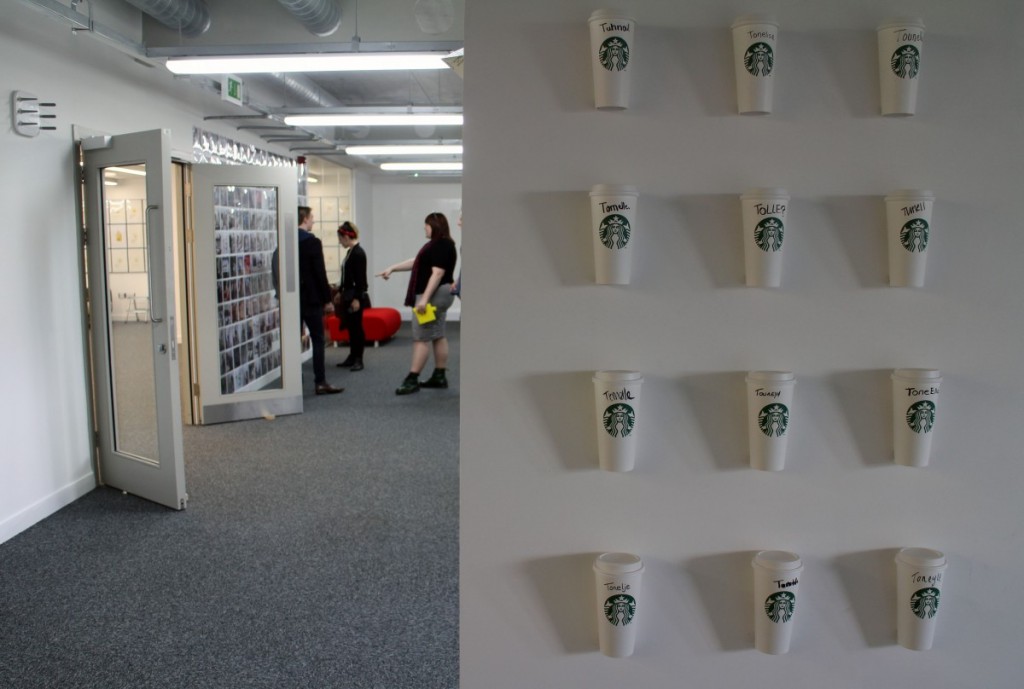 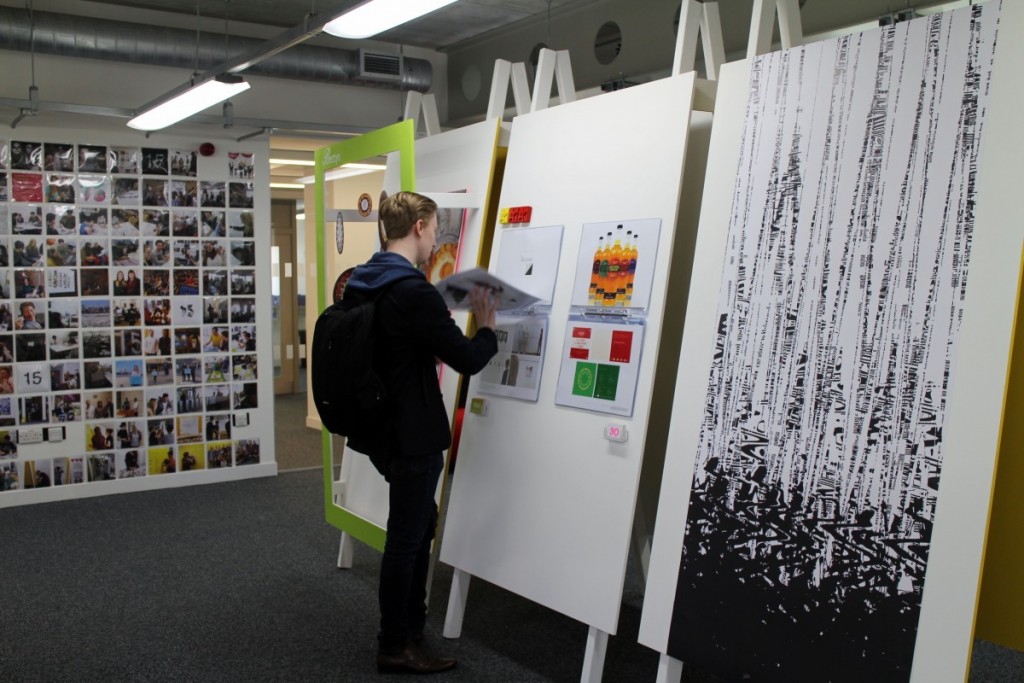 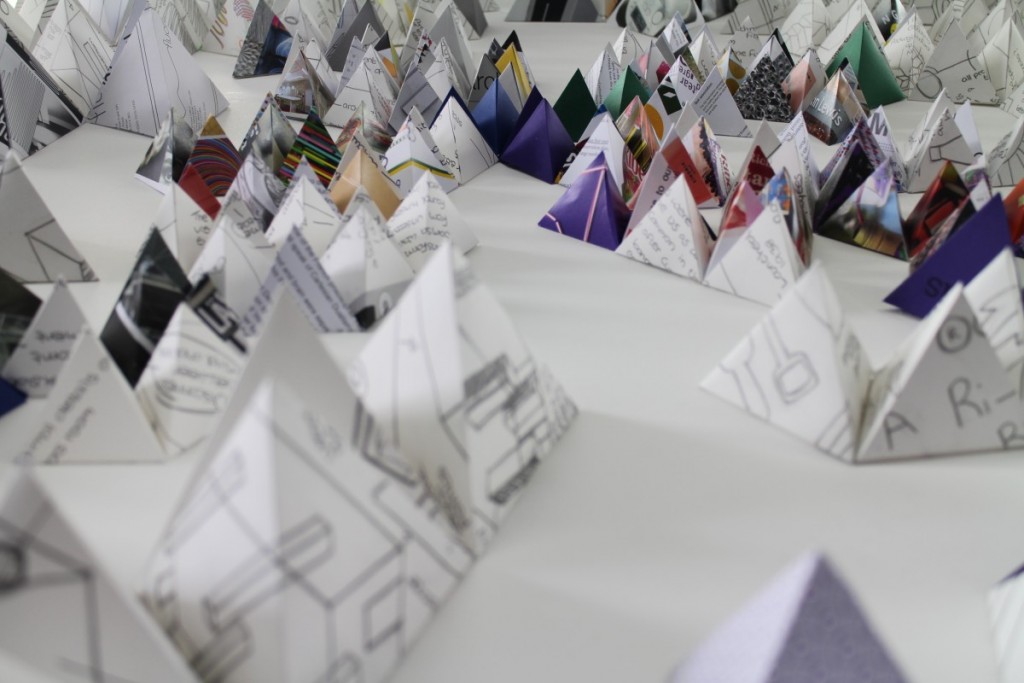 I found another triangle fan in Connor Robertson, who produced his whole board by folding snippets of his work into triangular form. 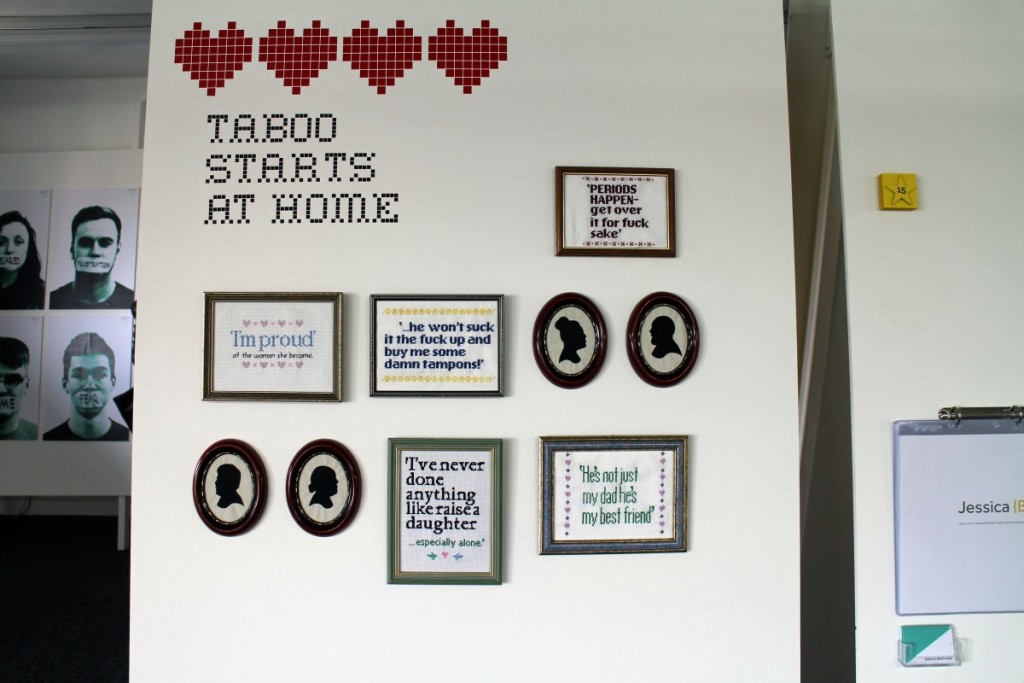 And the interactive boards just kept on coming, with beautiful cross stitching about periods by Jessica Brayford  and Jake Bailey’s vinyl application for his Colman’s branding. I can taste the mustard from here! 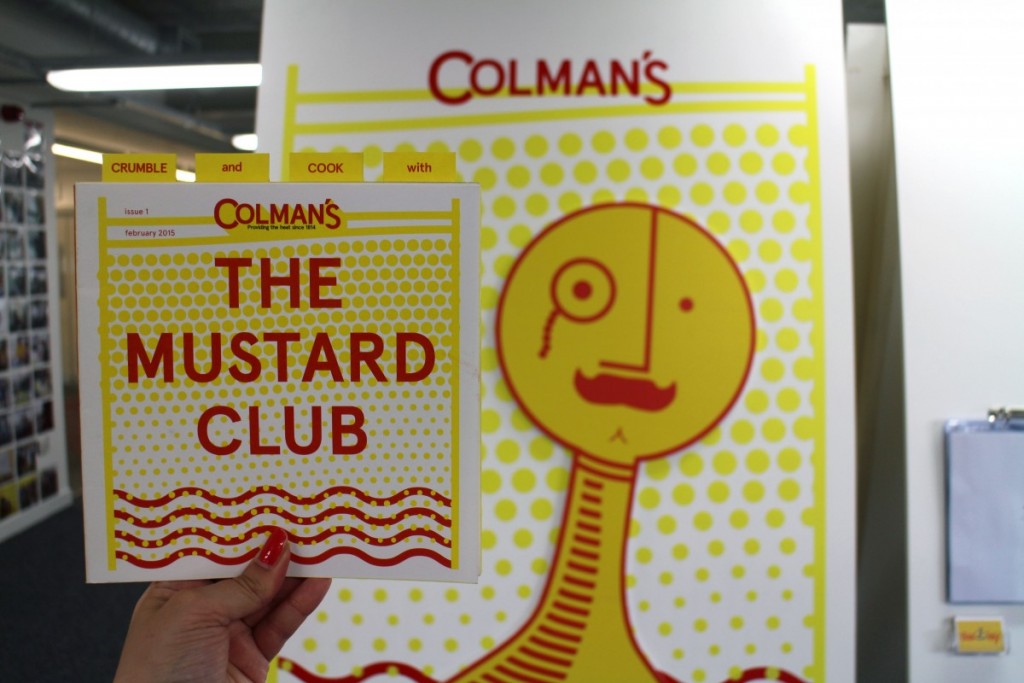 In the next room, Hannah Tomlinson’s playful branding for Great Yarmouth caught my eye – love the mix of patterns with type and image. Sugar overdose in a stick (rock) and a colourful identity, now just need to work on the weather! 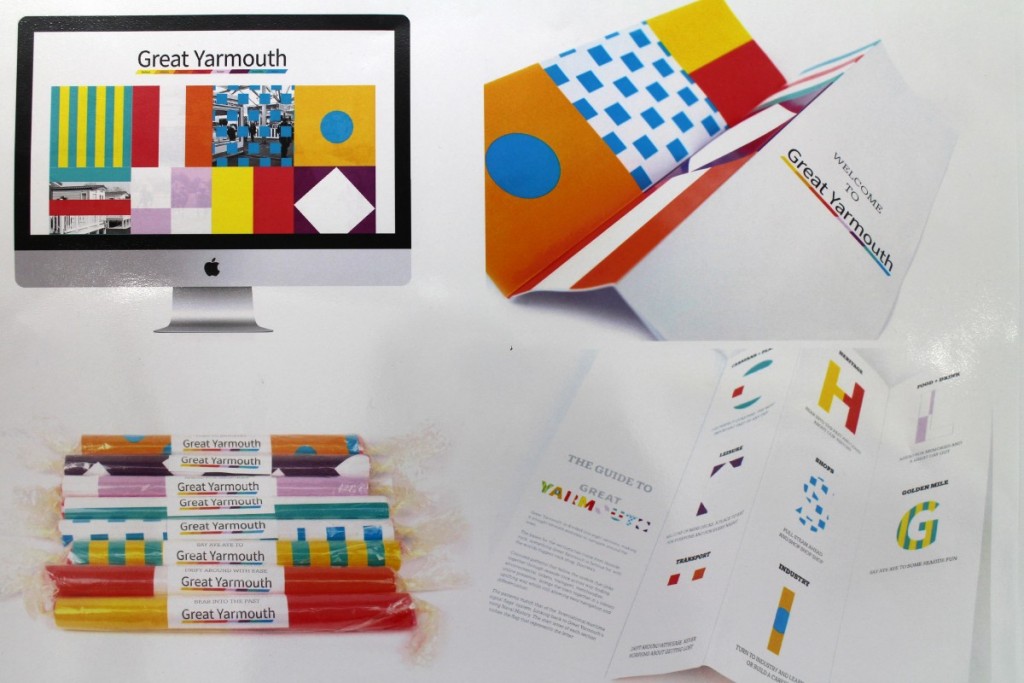 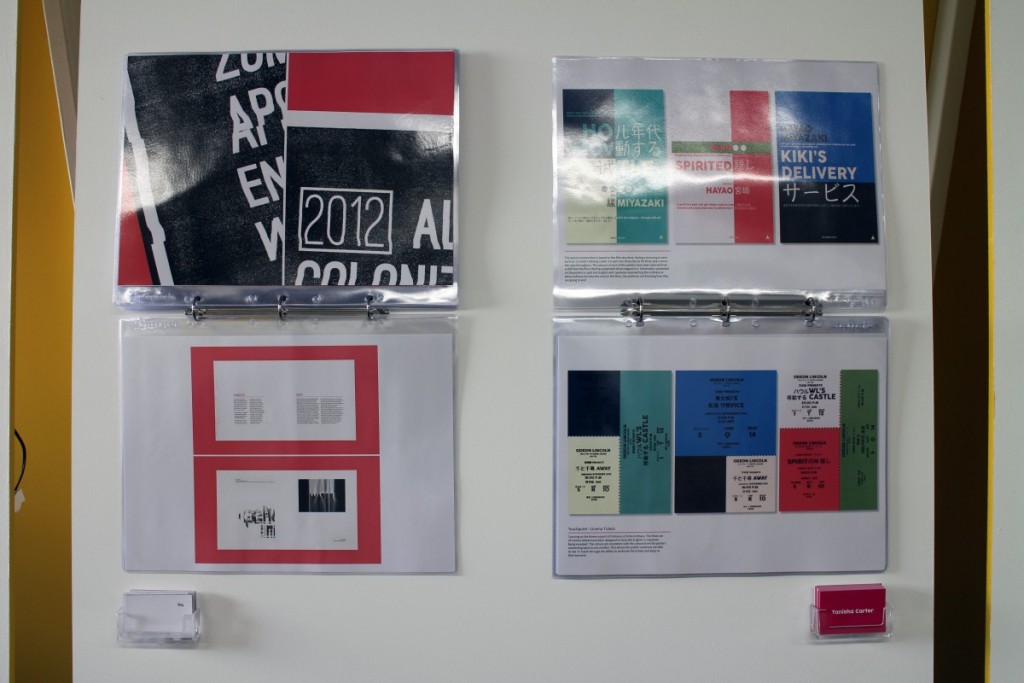 I found some lovely pieces of work flicking through the portfolios of Rajan Solanki and Tanisha Carter – colourful and confident use of type.

And last but not least, Sophie Bundell’s panel had all of the alumni in a fluster; 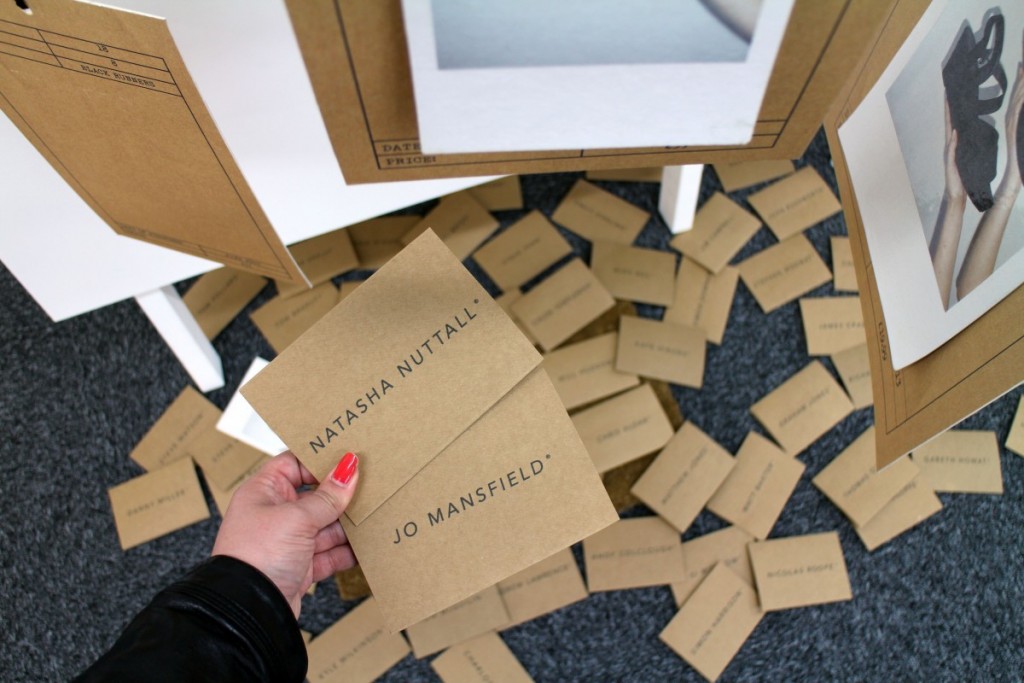 A clever way to get people to engage with her work, Sophie used the names of Lincoln Alumni (and other designers) to peak our interest and entice us to open an envelope. I also really liked her idea for a tights ‘swatch book’ where you can hold the tights material to the skin so you can check the density of the denier – genius! I’m always wondering if tights will be too thin or thick – #girlproblems! 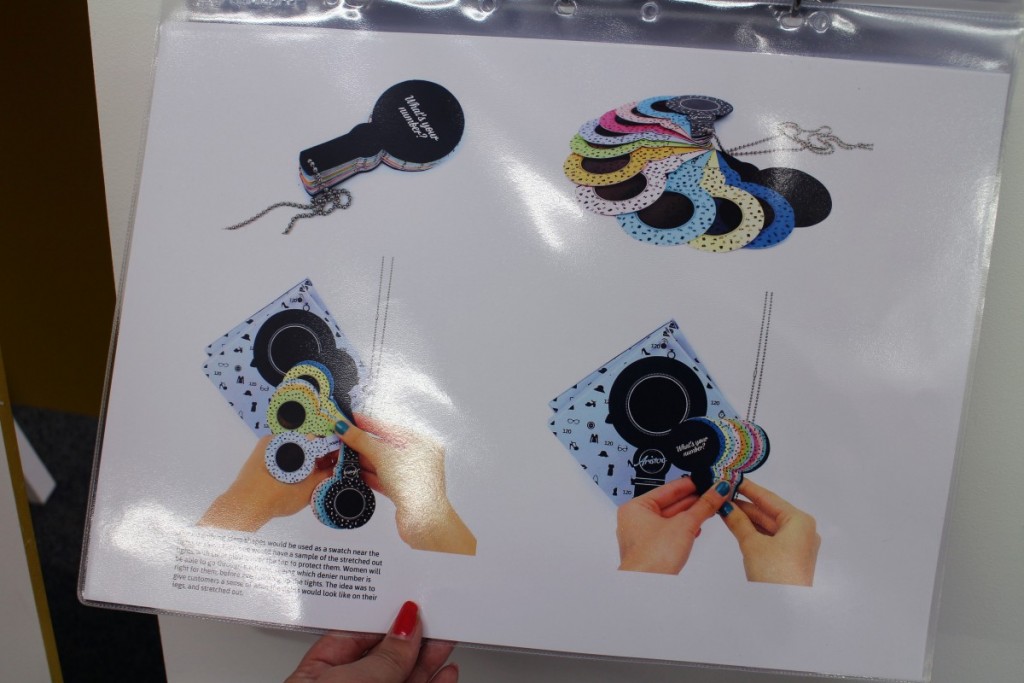 It was a pretty surreal night actually – burnt bridges repaired and everyone partied in harmony. It was very odd, but it was very nice. And I still can’t believe we went to Superbull – OH GOD WHAT WERE WE THINKING!?

There are some brilliant designers graduating from Lincoln so take a look at the Show Fifteen website and if you can, offer some a placement or a job if you’re feeling generous! Lincoln grads are hard working, have a great eye for detail and a lot of potential. They’re going to be amazing one day(not that I’m biased) and I can’t wait to bump into some familiar faces in the future! Well done guys and don’t be a stranger 🙂

Are you going to be visiting Lincoln for the degree shows? Let me know your highlights!