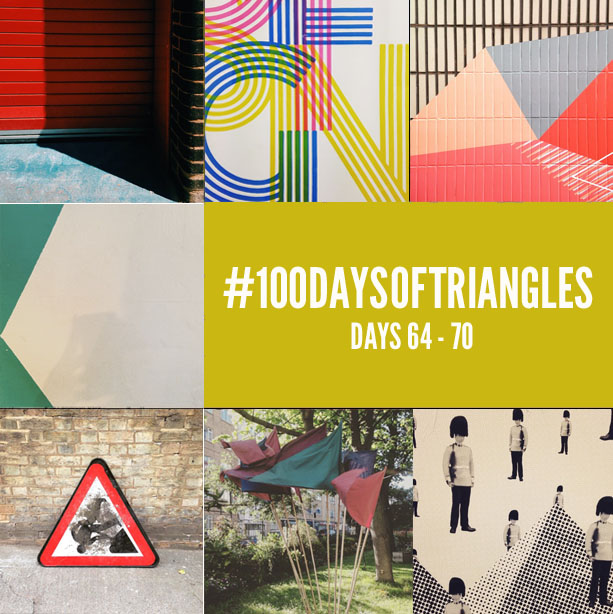 So this week Instagram made some changes to their layout – the new simplicity looks great, but they’ve removed the header meaning that I now have to make a weekly roundup montage rather than just screenshot the generated one – boo!

In terms of #The100DayProject, Week 10 has been the best yet because something really amazing happened! So every Monday there is a #The100DayProject newsletter which features inspiration from #The100DayProject feed and top picks from some creatives (including Olimpia Zagnoli, Jessica Walsh and Timothy Goodman and Debbie Millman). This week it was the turn of artist and illustrator Lisa Congdon who picked 3 of her favourite projects… 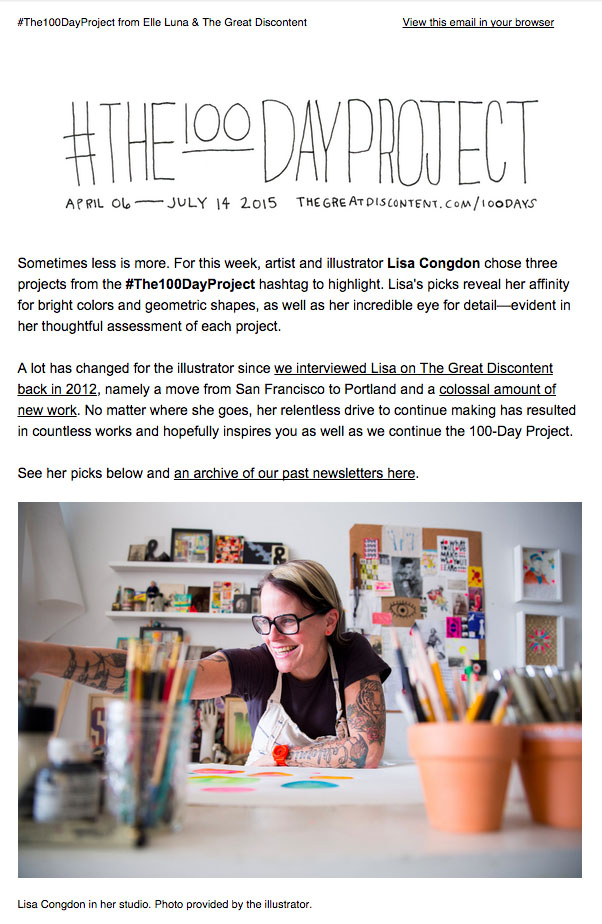 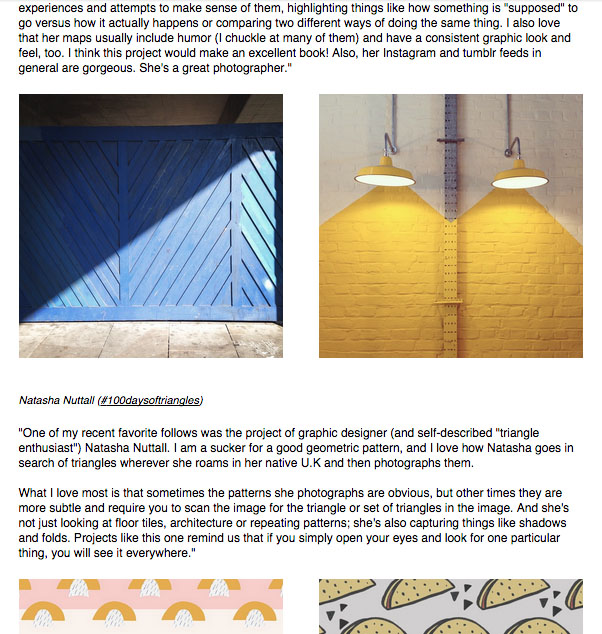 …1 of which was #100daysoftriangles! I was so shocked but happy to find my images featured as one of Lisa’s picks – what an honour to be selected out of all of the amazing projects! And this is what Lisa had to say:

“One of my recent favorite follows was the project of graphic designer (and self-described “triangle enthusiast”) Natasha Nuttall. I am a sucker for a good geometric pattern, and I love how Natasha goes in search of triangles wherever she roams in her native U.K and then photographs them.

What I love most is that sometimes the patterns she photographs are obvious, but other times they are more subtle and require you to scan the image for the triangle or set of triangles in the image. And she’s not just looking at floor tiles, architecture or repeating patterns; she’s also capturing things like shadows and folds. Projects like this one remind us that if you simply open your eyes and look for one particular thing, you will see it everywhere.”

Check out the newsletter for yourself

Thanks SO MUCH to Lisa for featuring, enjoying and totally getting #100daysortriangles. It definitely is about seeking out the less obvious, but always surrounding us and looking at the everyday in a new way! 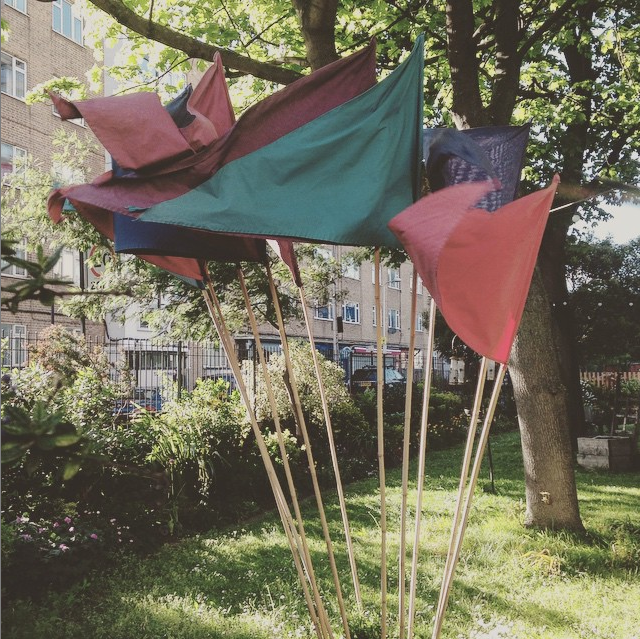 64 – After finding #100daysoftriangles in the newsletter I posted this to celebrate flying the flag for triangles. I’ve walked past these on the way to Waterloo station a couple of times but it was just perfect for marking the occasion! 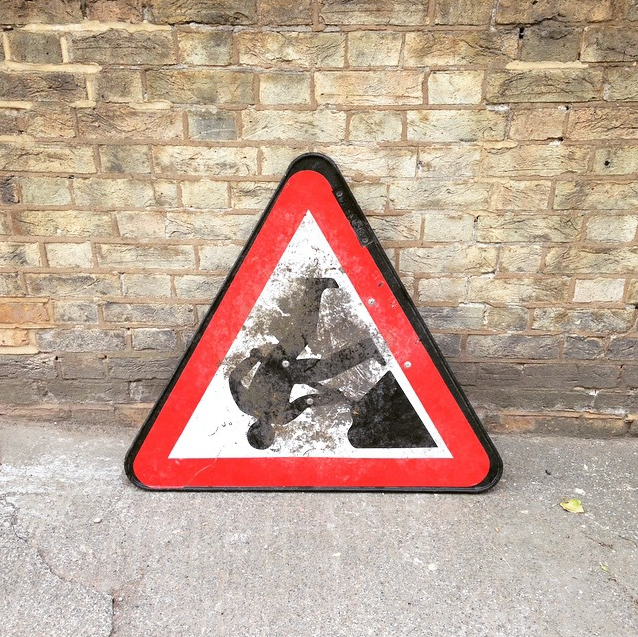 65 – I walked past this battered sign on my way back from lunch and thought it was a great way to illustrate when a work in progress doesn’t quite go to plan. A lot of time things don’t go to plan but it’s about how you overcome the obstacle in the road – defeat it and it will make you stronger. 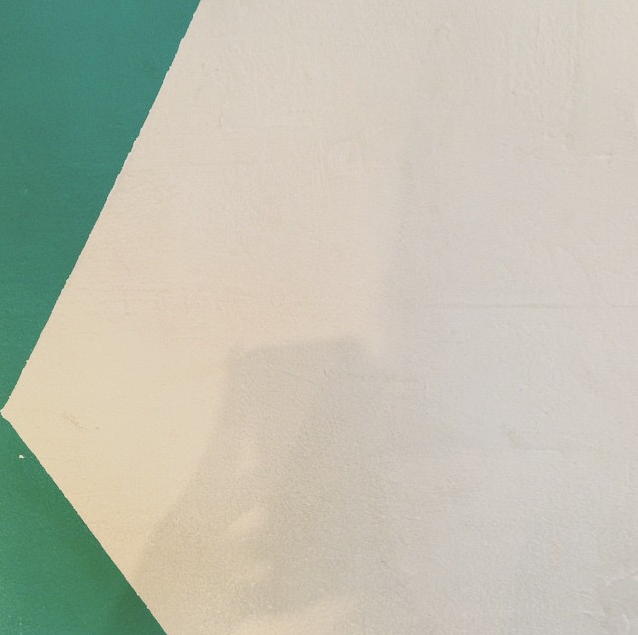 66 – I’ll admit that this was actually taken on a visit to DF Mexico a few weeks back. I love that place – the branding and interior design has lovely detailing and the food is great too! 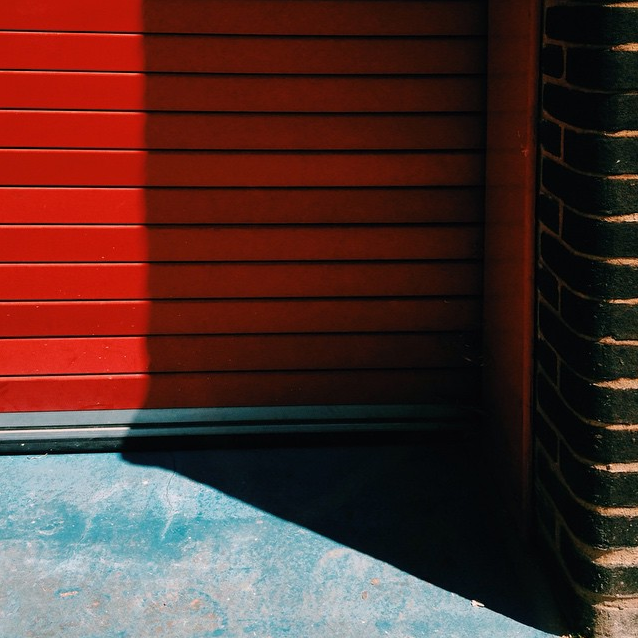 67 – SUNSHINE! This week I found it hard to believe that I was in England some days – the sun was blazing! And with the sun comes shadows. I stumbled across this in the doorway of the Fire Brigade museum – strong shadow game! 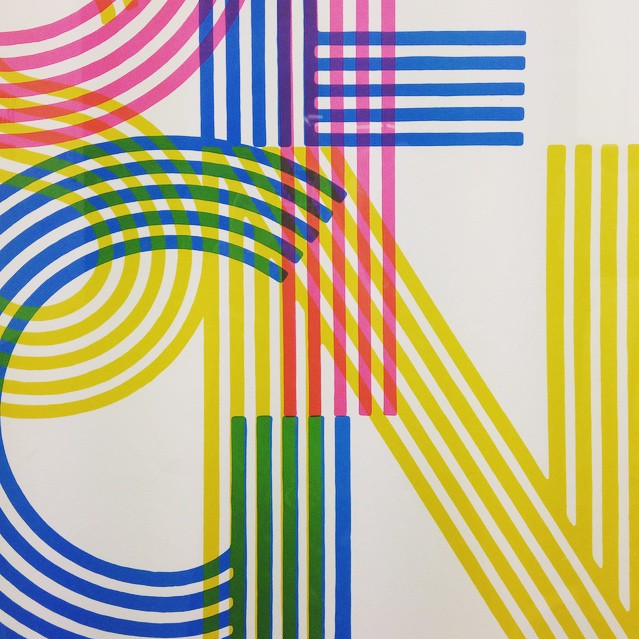 68 – The Made in Italy exhibition by Fedrigoni celebrates some of the best, innovative typography all the way from Italy, but I did manage to do a bit of triangle spotting too. This piece by Giancarlo Iliprandi is like a written rainbow… with hidden triangles. 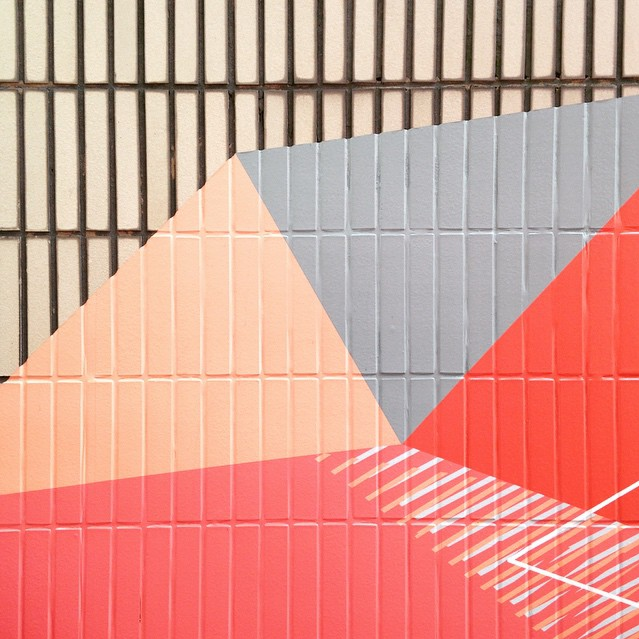 69 – Only one shape could be right for the wall art at Old Street station aka hipster central/Shoreditch. OF COURSE it’s the triangle. These patterns definitely brighten the area anyway… 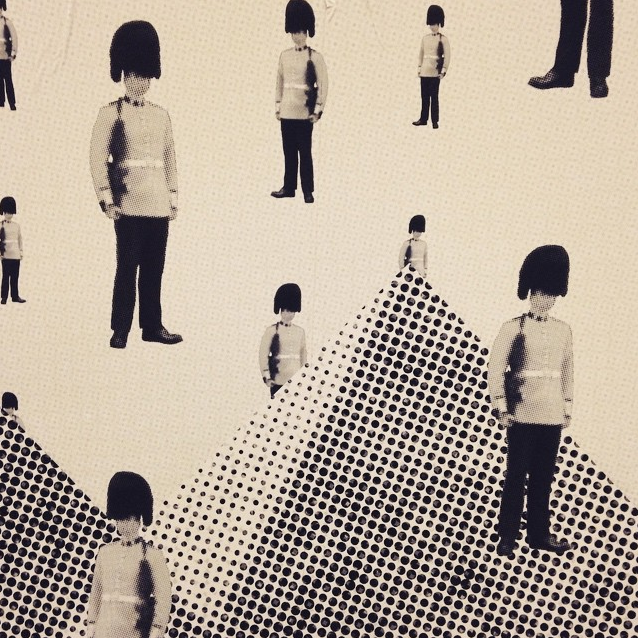 70 – Who would have thought that I’d find a pyramids and soldiers pattern in a disused underground station? Jack & I went on a Hidden London tour of the old Charing Cross station, where several films, TV shows and music videos have been recorded including The Bourne Ultimatum, Skyfall, Spooks and Madonna’s Hung Up apparently.

Thanks for everyone’s continued support – only 30 days to go now! What will I do when the challenge is over?! Don’t forget that for daily triangle updates follow me on Instagram @natasha_nuttall and via my hashtag #100daysoftriangles.

Made In Italy by Fedrigoni @ Studio 2