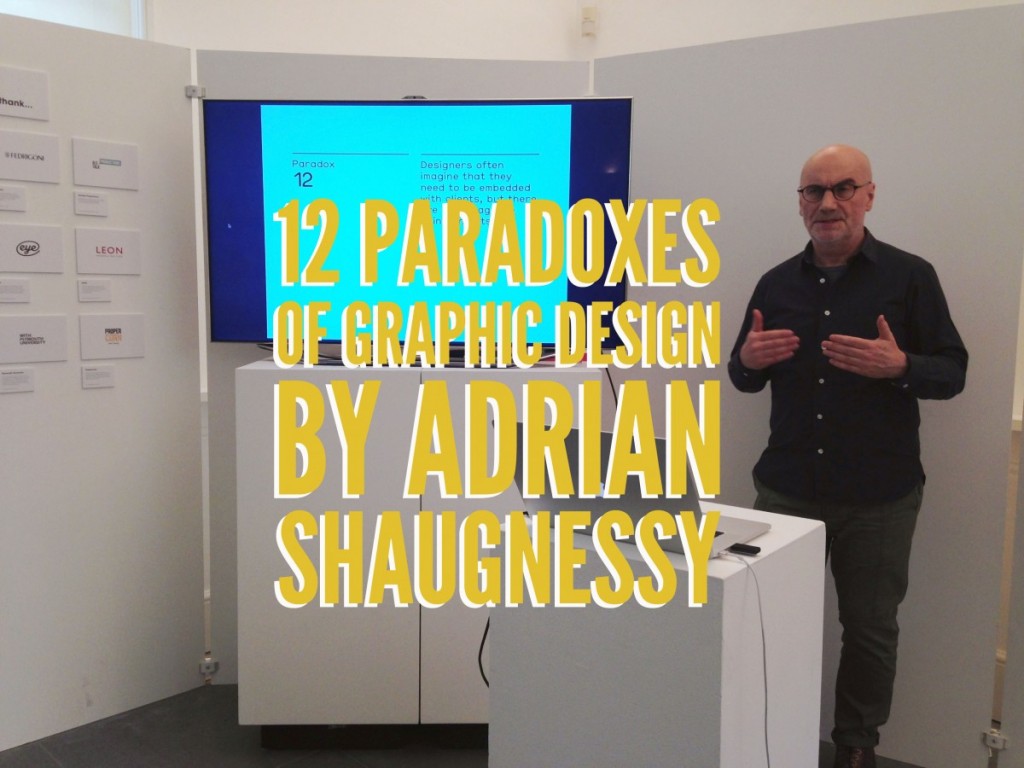 A couple of weeks back (yeah, I’m a little behind with my schedule sorry!) I found myself at Pearlfisher studio for the 233 Miles Design Festival. Organised by a group of Graphic Design soon-to-be grads from Plymouth University, the festival brought their degree show to London whilst hosting a series of free lunch time talks from Adrian Shaughnessy, Michael Johnson (Johnson Banks) and Alan Kitching.

I already had the 8th July booked off, so I signed up for a free ticket to Adrian’s talk. Adrian Shaughnessy author of the brilliant book How to be a Graphic Designer, Without Losing Your Soul it’s a must read for all Graphic Designers, and something that you can dip in and out of throughout different stages of your career. 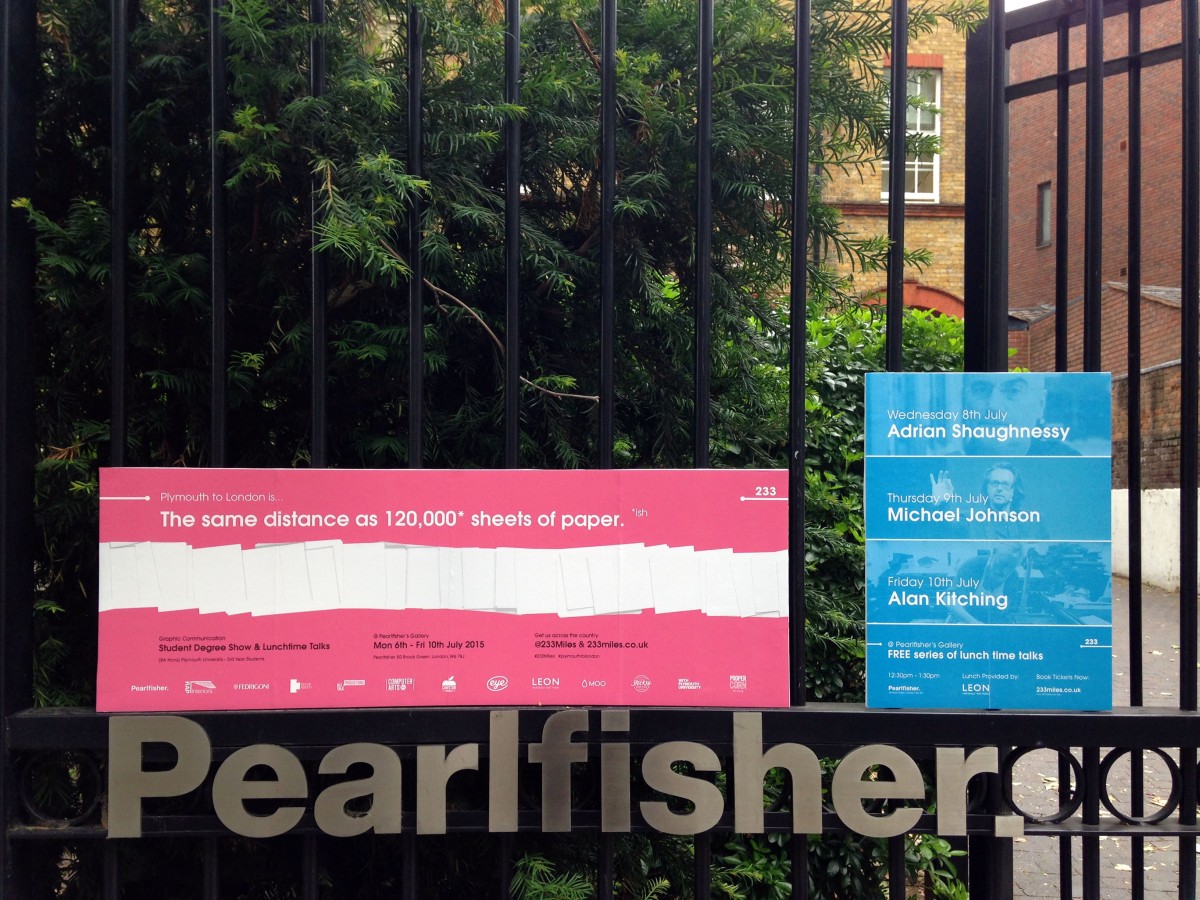 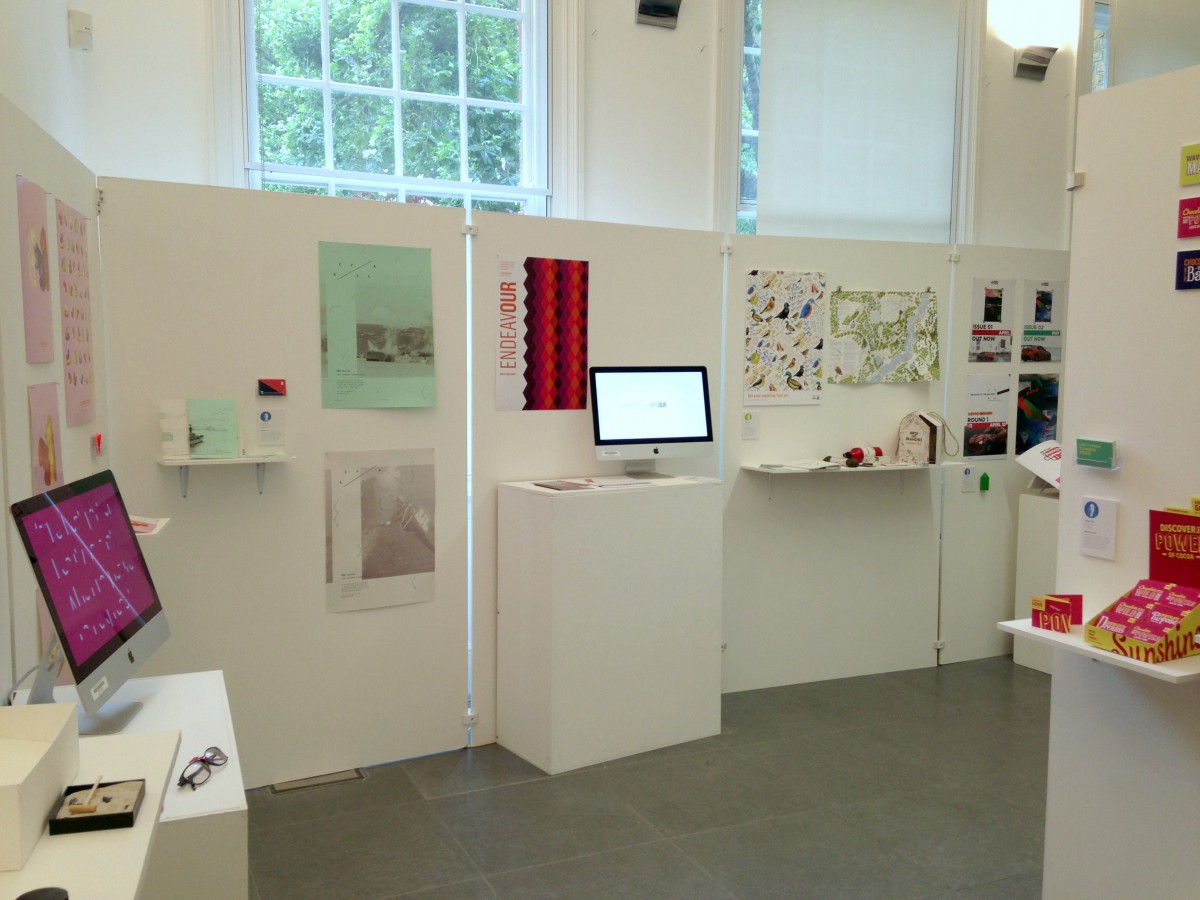 Before the talk I had a look at the student’s work; everything was well presented and there were some really good branding concepts, packaging and editorial work. I was approached by some of the students too, which I was impressed by – it’s important in this industry to be confident enough to talk about your work to a stranger!

I’ve seen Adrian talk/host talks a couple of times before (Paula Scher at LDF 2014, Studio Culture at Design Museum 2012) but as there was no ‘theme’ or talk title I didn’t know what to expect. After a quick introduction, Adrian revealed his talk: 12 Paradoxes of Graphic Design. 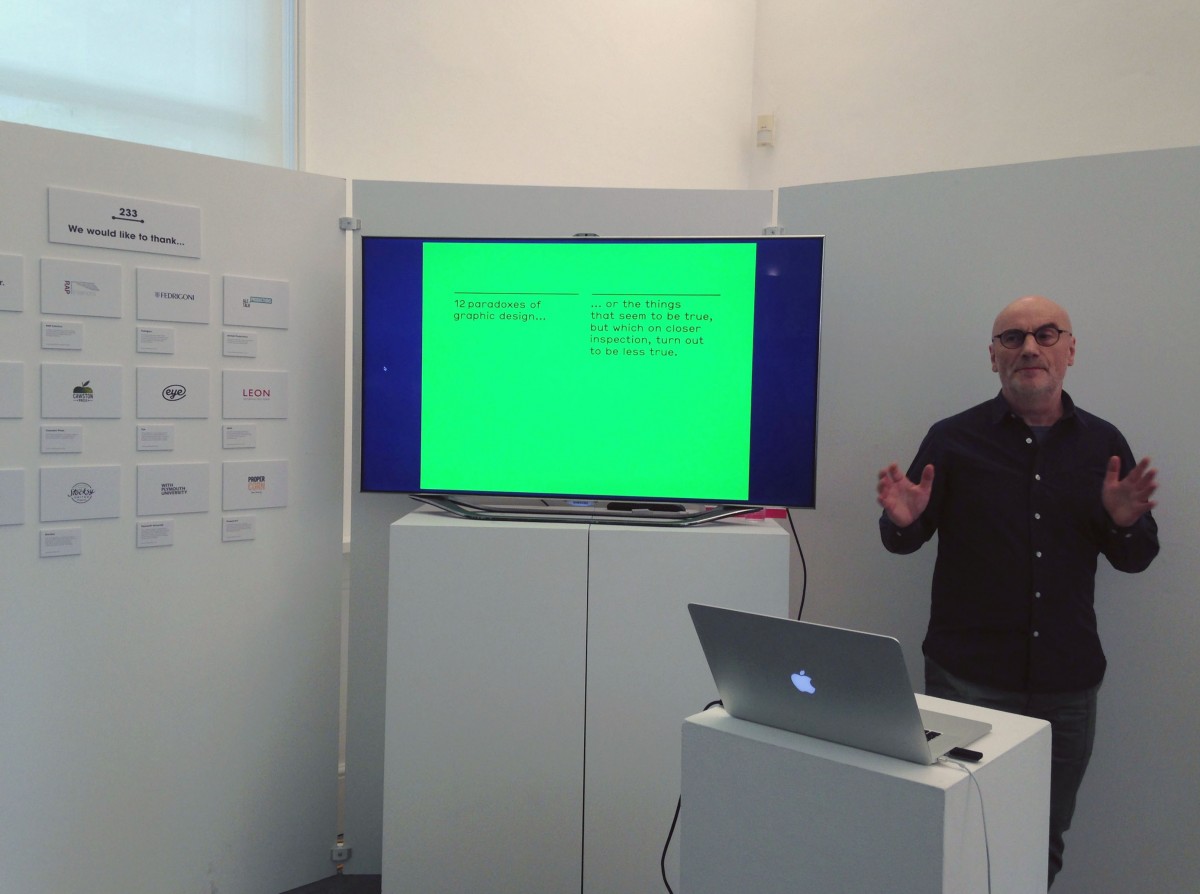 1. There’s no such things as bad clients, only bad designers. Adrian explained that instead of blaming the client, we should look to ourselves to understand where it’s going wrong. Communication is key.

2. The best way to become a better Graphic Designer is to spend time as a client. Seeing the design process from the other side as a client really helped Adrian to understand the relationship.

5. For Graphic Designers, possessing verbal skills is as important as possessing good visual skills. You could be the best Graphic Designer in the world, but if you can’t talk about your work or to clients there’s only so far you can go.

6. Most ideas fail not because they are bad ideas but rather because they are badly presented. Adrian explained that back when he owned a studio he was confused to why some of the best ideas weren’t being picked. They looked at the way they were presenting and decided it wasn’t working. 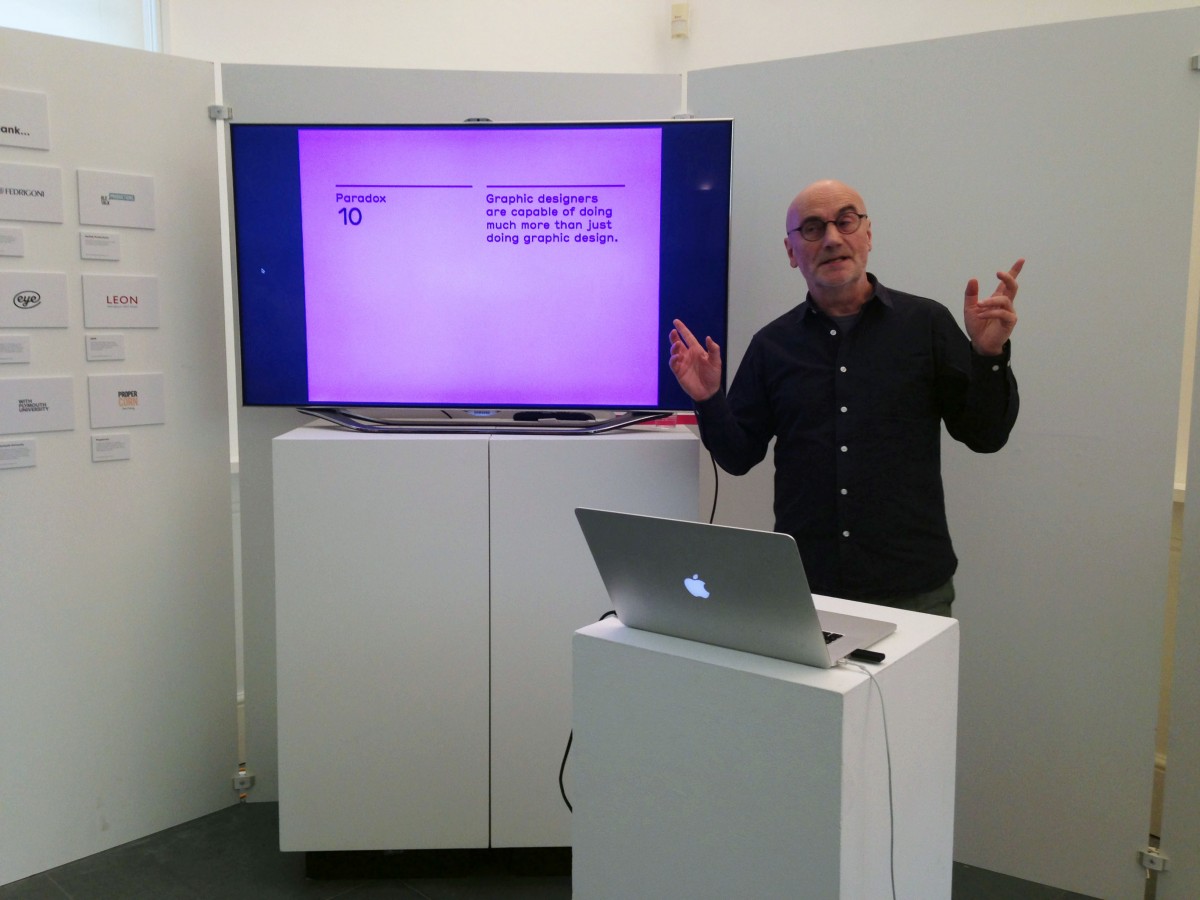 7. Designers who use the argument ‘ I know best because I’m a professional’, are usually unprofessional designers. Just because you’re a designer, doesn’t mean that you know best about everything in design.

8. We often imagine that all the good projects go to other people. Not so. In fact, nearly all jobs start off as neither good nor bad. Every project is the same, it’s what you make it.

11. If you believe nothing, then your clients will have no reason to believe in you. What do you stand for? What are your beliefs and morals? Don’t want to pitch for free? People will respect you for that.

12. Designers often imagine that they need to be embedded with clients, but there are advantages in being an outsider. Being an outsider brings a fresh point of view and a new pair of eyes to the table. If you’re too involved, you might not see the full potential of an idea. 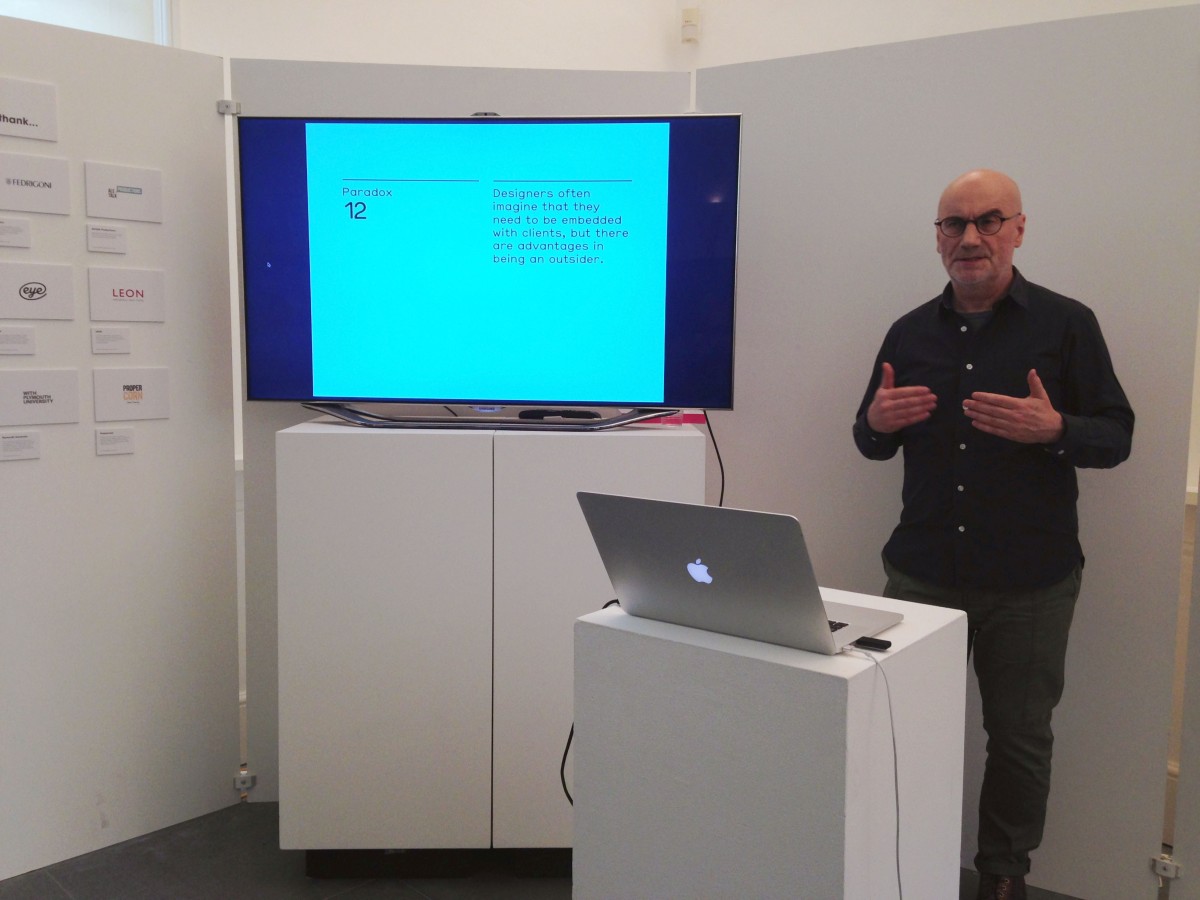 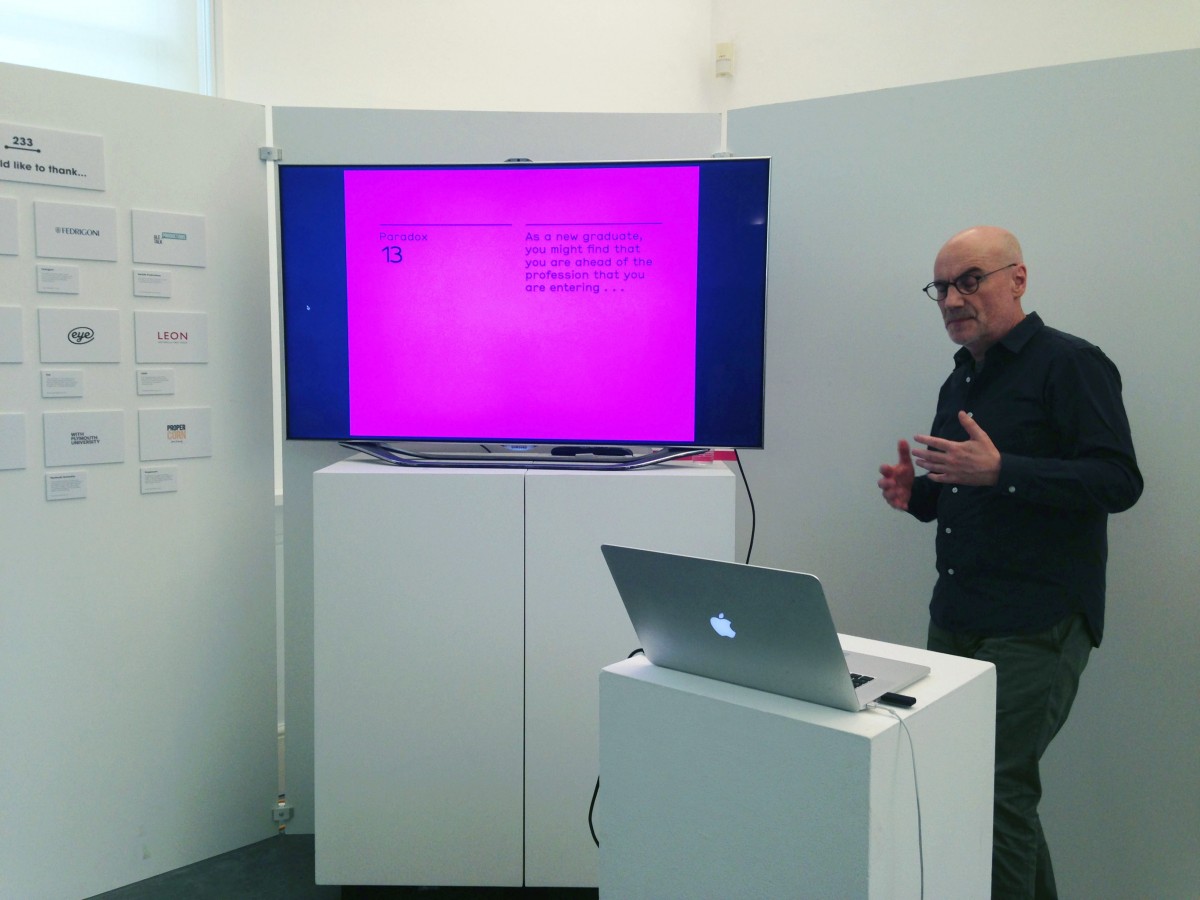 But it didn’t end there…

13. As a new graduate, you might find that you are ahead of the profession that you are entering. As students, your only client is your tutor you’ve got an ‘unlimited budget’ (in the sense that you don’t have to get quotes and think/design based on client budgets) and you can push an idea to crazy heights. Leaving University you have so much enthusiasm and radical ideas that when you get into the industry you have to slow down.

Overall I was really impressed with the Plymouth students – as a Lincoln graduate I know how hard it is trying to persuade people to visit your degree show because it’s not based in London. It’s a long way to travel to see student work, so they used their initiative and brought their course to London. It’s not easy organising an event, especially one with speakers and sponsors, and I think they did a brilliant job! Good luck to them all.