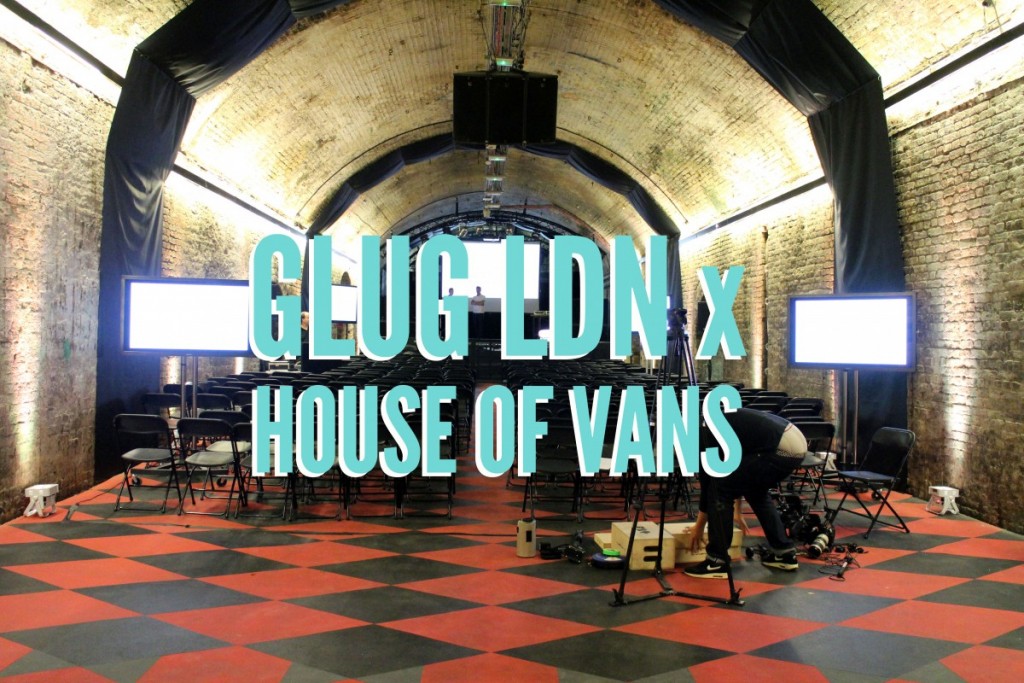 A couple of weeks ago I was lucky enough to bag some tickets to the glug LDN x House of Vans event. Glug run a series of talks/creatives events around the world, but I’d not been to a glug event… until now. After hearing good things I was excited, PLUS this time tickets were free so everyone was keen to get their hands on them.

Last Thursday it was glug time! Jess(who has just travelled down to London to begin her internship with Sophie) & I were pretty early… I was expecting a massive queue but actually there was only about 20 people in front of us. Can you spot me on my phone at the end of the barrier? (I was trying to get hold of Lucy) 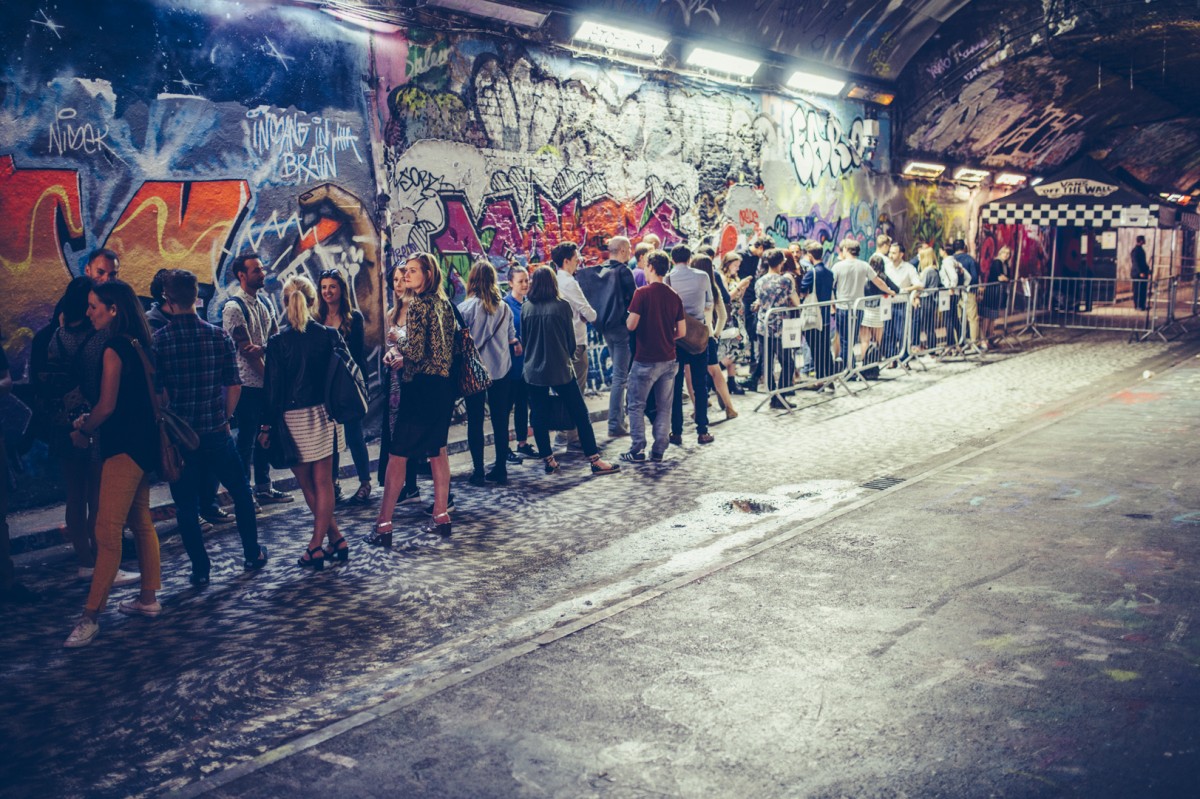 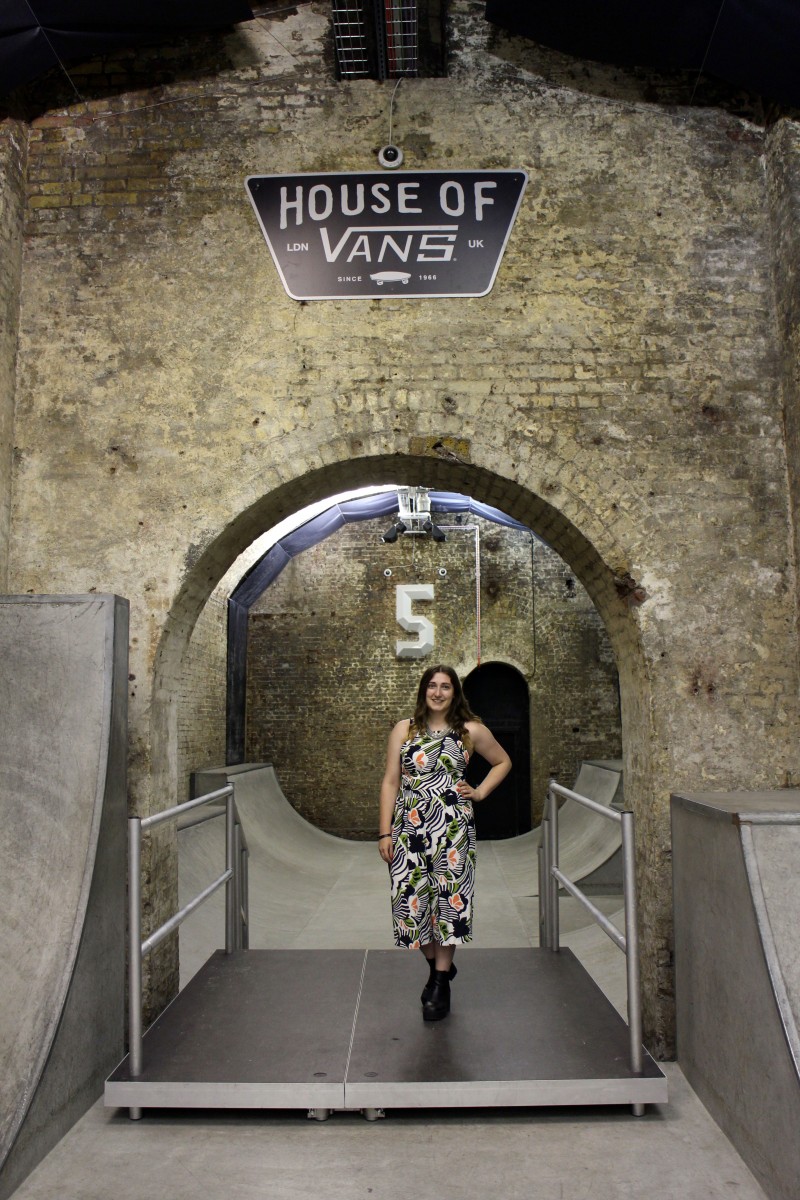 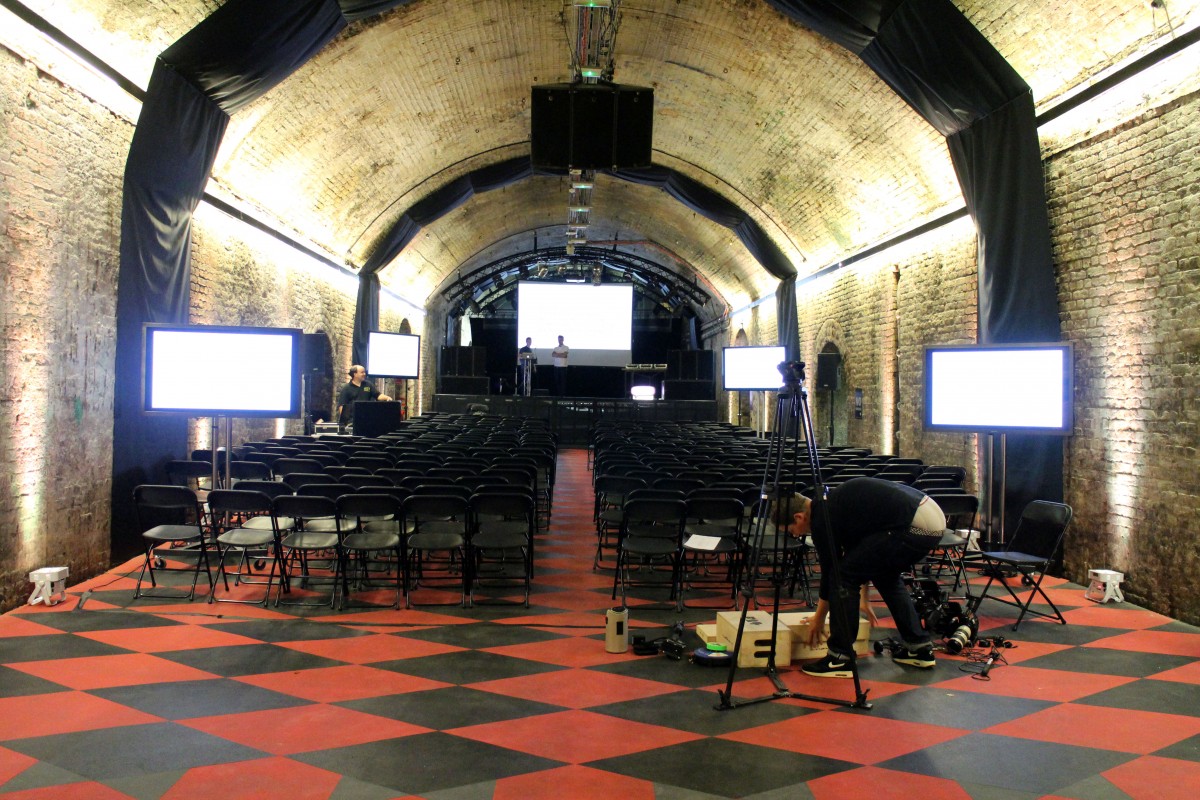 As one of the first ones in it was great to see the full scale of the space, but it didn’t stay quiet for long… 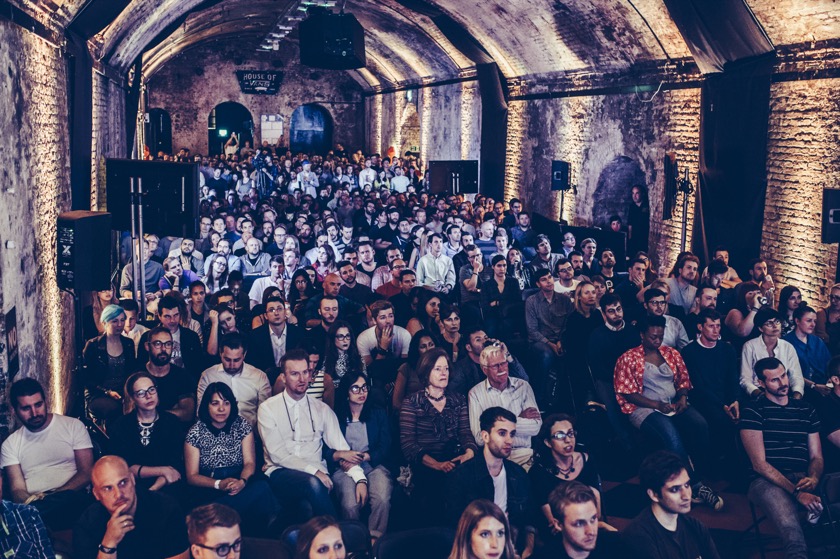 Spotted: Tim, Jess(with a can up to her face), Lucy & I 3rd row in on the far right (Photo credit glug/House of Vans) 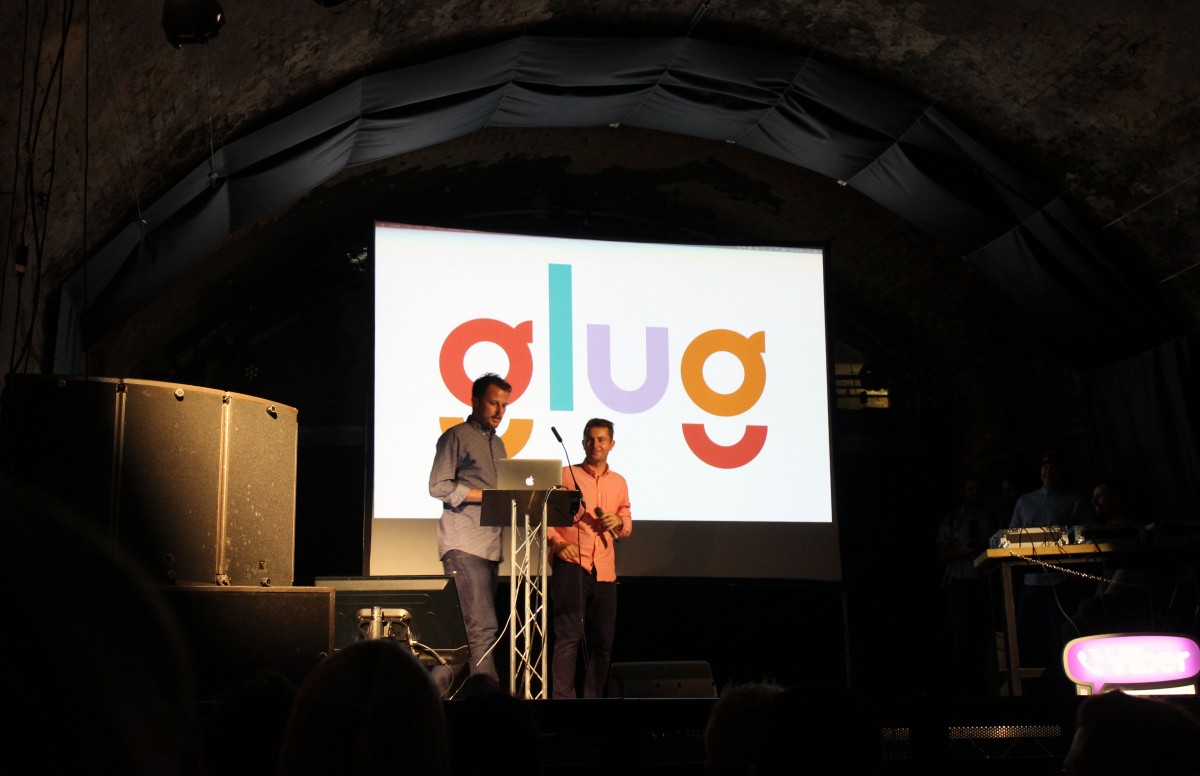 Before the masses of people poured into the venue I had a little snoop around to see what was going on – talks, cinema screening room, exhibition, gaming area, photo booth and of course, a bar (or two).

With everyone seated, the glug guys (Nick and Ian) did a quick intro to the night and then there was a bit of time to hear from Rick Lomas of Super Hi (a new coding school launching soon – which I have applied for so fingers crossed!) who was running a code surgery on the night… 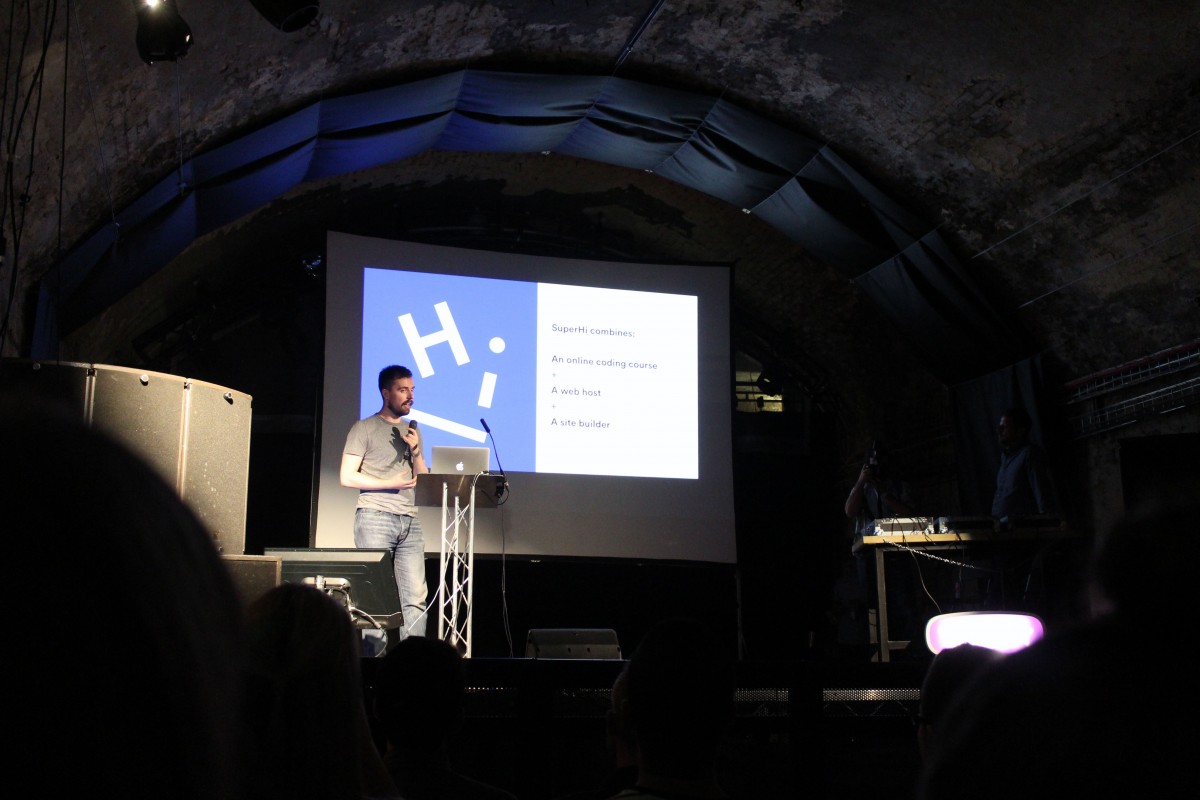 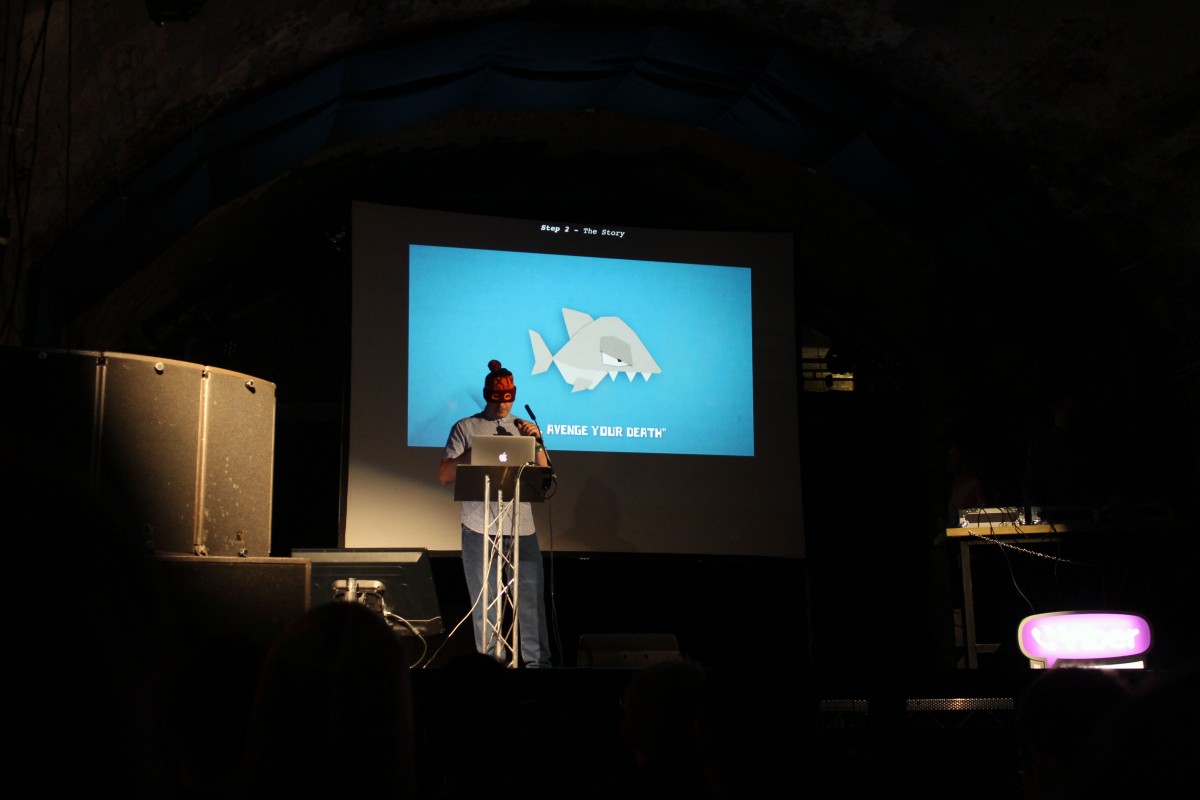 … and Ronzo (wearing a wooly hat with eye holes…), who shared the process of making a video game which you could actually play next to one of the bar areas: 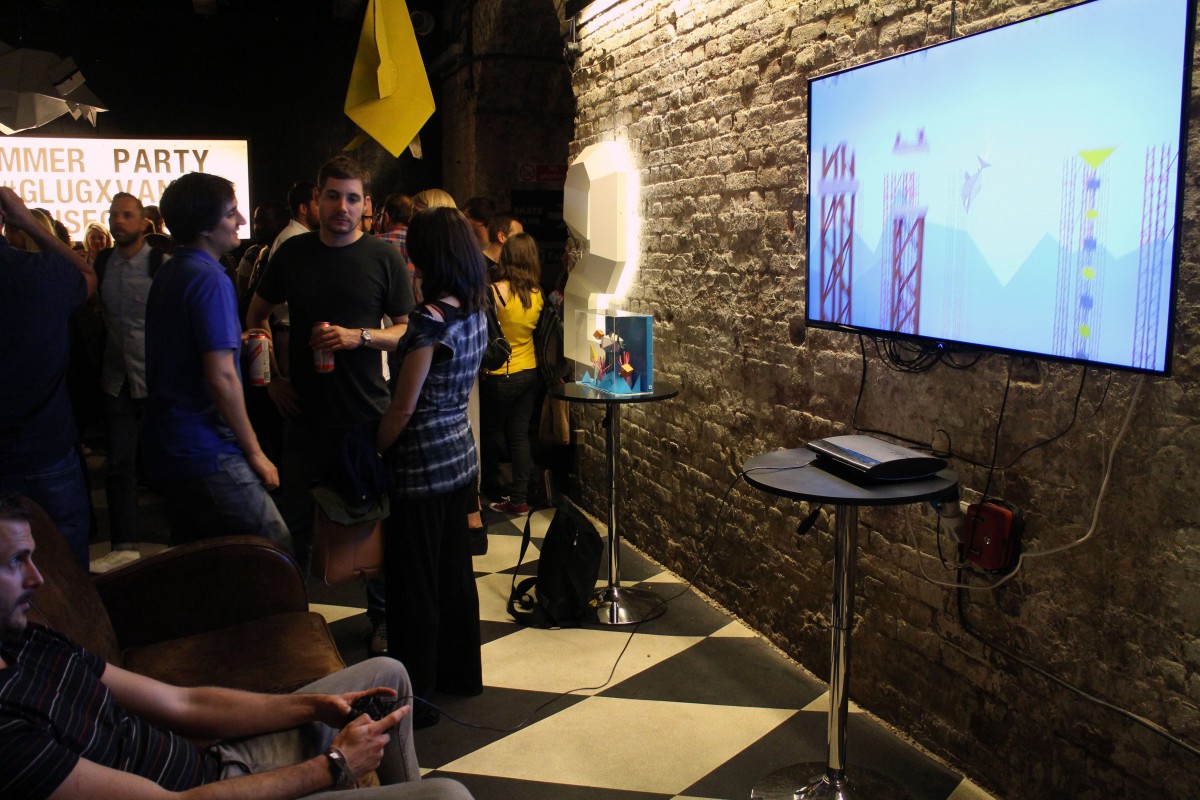 Then it was time for the line up of speakers to begin! First up was Mr Bingo, most famous for his hate mail postcards and use of explicit language. He recently launched a kickstarter to fund a book of his hate mail collection and has raised over 3 times of the goal – impressive!

Introducing the kickstarter, Mr Bingo created a rap video(obviously) and shared the process with us… 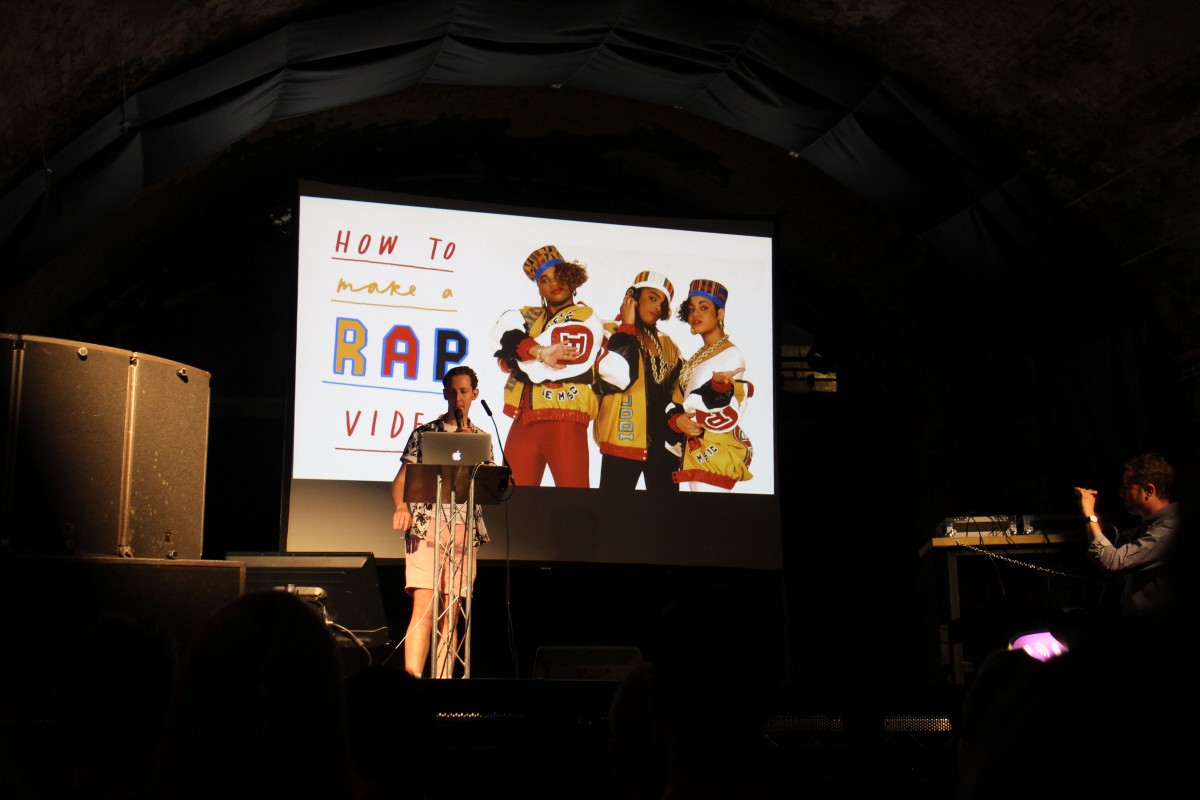 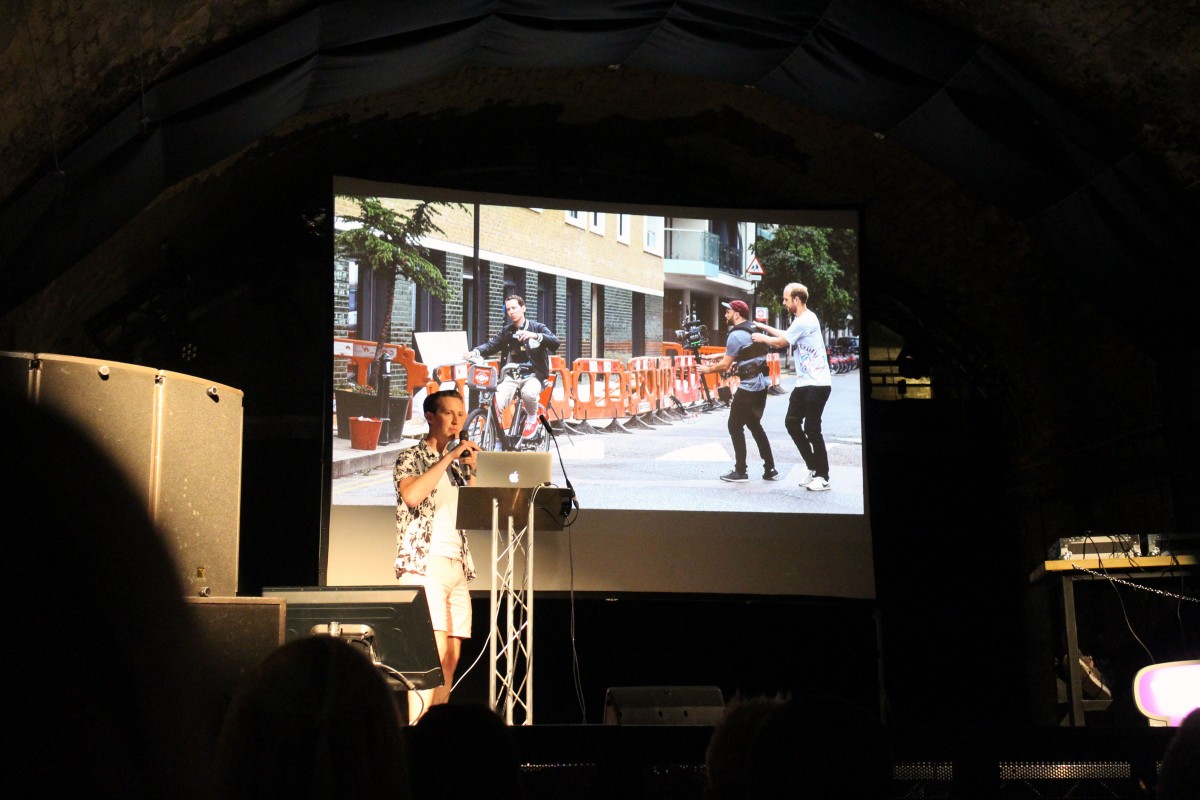 … from writing the rap and scouting locations to sourcing costumes and gathering a ‘crew’ – it seemed like a right laugh. I expected Mr Bingo to be a bit of a Marmite character – I’d either hate or love him. I actually really enjoyed his talk and think he’s a really genuine guy. It’s sometimes hard to gauge from someone’s online persona but he doesn’t take himself too seriously, so he’s not a dickhead.

After a light hearted talk with enough swear words to last a year, Ume from UsTwo took to the stage to tell us about the development of Wayfindr, an app to help visually impaired people use public transport. It was a complete contrast to Mr Bingo’s talk and a reminder that design is not only for entertainment; design can really make a difference to people’s lives. 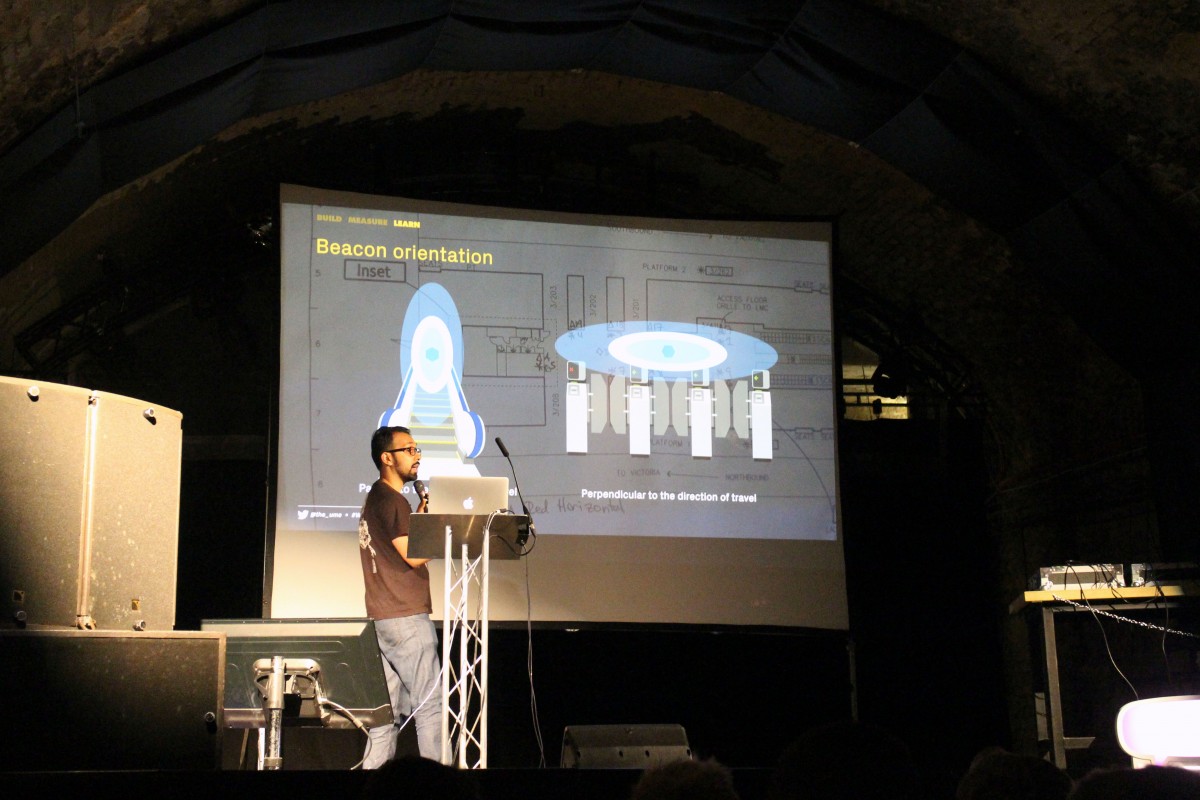 The app (which isn’t ready yet) uses beacon technology within underground stations to send messages/instructions/help to users. The app allows a visually impaired user to be independent and travel around London seamlessly. It’s amazing technology and think it’s safe to say that it touched everyone’s heart.

After roughly an hour on what seemed like the most uncomfortable chairs EVER, Jess, Lucy & I (joined by illustrator Tim Easley) decided to go and explore the rest of the vaults. We found this exhibition from some Illustrators and Artists of Bernstein & Andruilli: 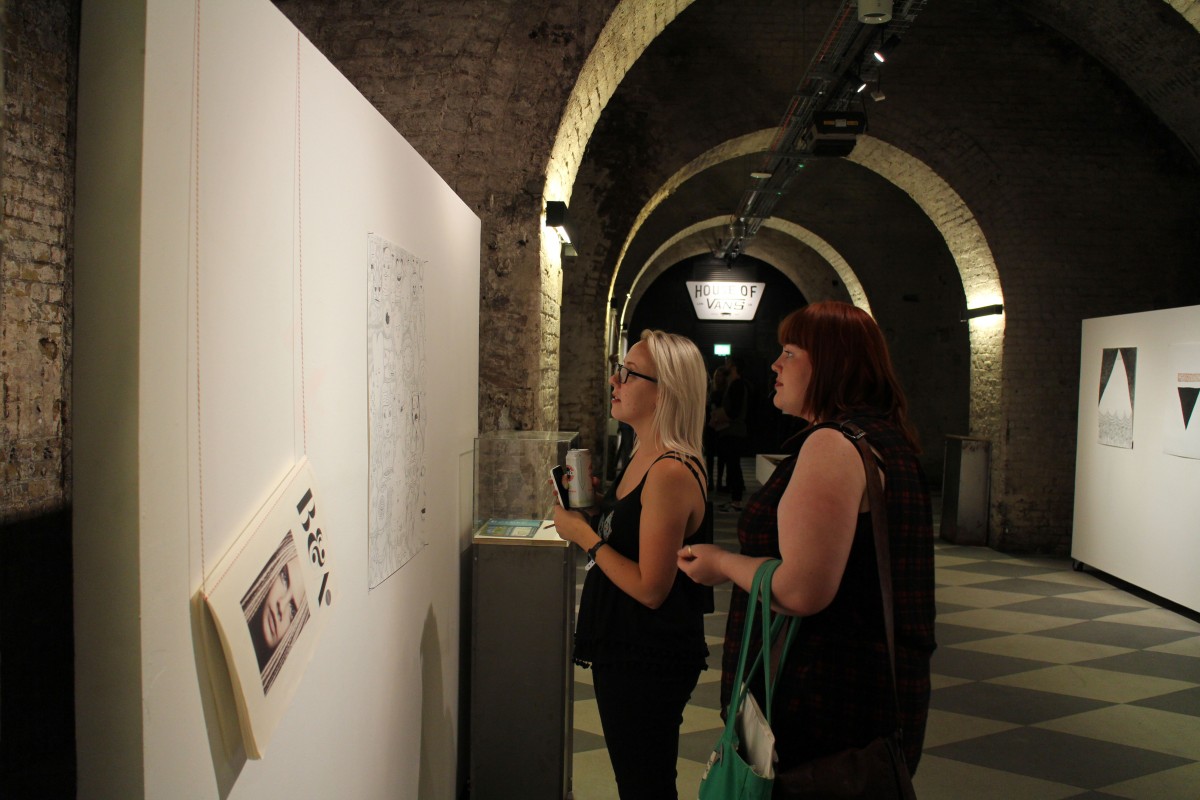 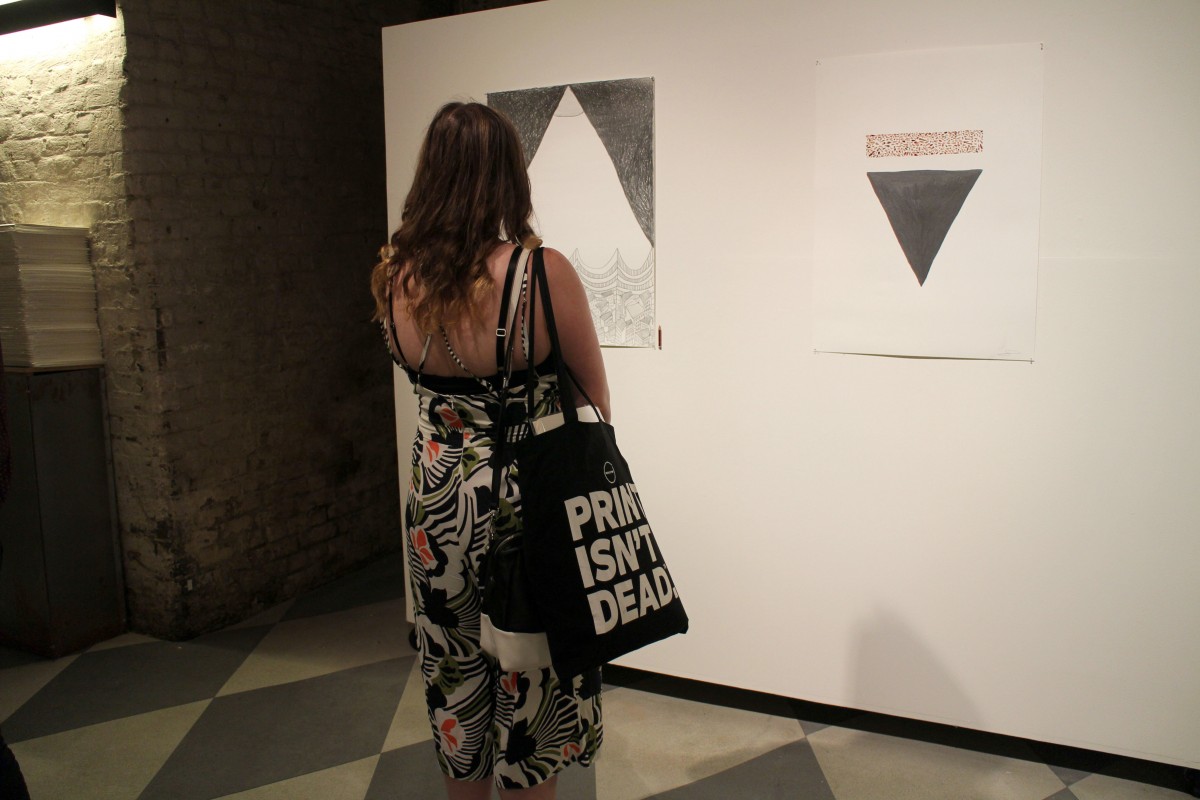 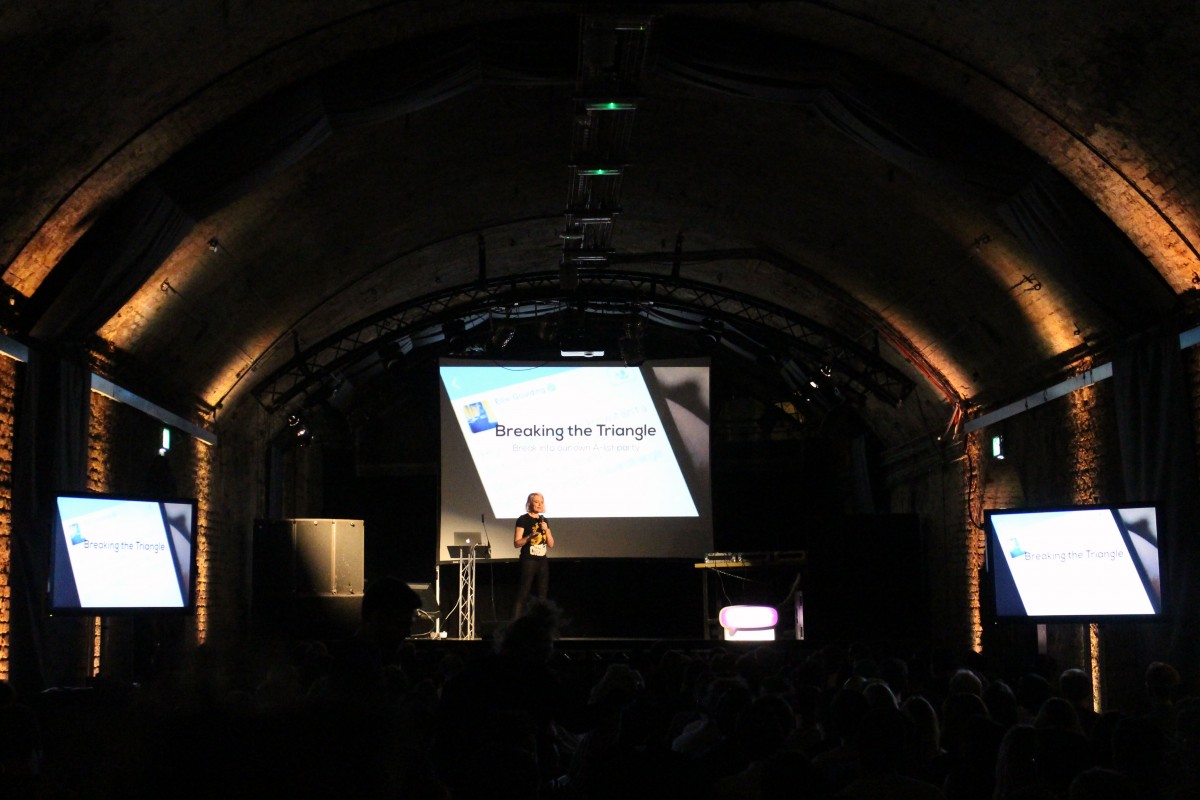 … or three! After a bit of a break we headed back into the main talk room to see Laura Jordan Bombach talk about triangles, well about the Bermuda Triangle anyway. Laura is an advertising creative, who I actually saw at an event the other week – she’s one of the founders of She Says! Sharing some of the thoughts behind campaigns for Grey Goose and Barcardi first, Laura then turned to campaigns for social issues – have you heard about the #MyMothersNameIs campaign? If not, watch this video:

I’m sure that you’ll agree – it’s unbelievable that in 2015 a woman can ‘lose’ her name! Laura also highlighted the gender disparities in the industry; something that is often discussed at She Says events – where are all of the women? Why is the creative industry so man-heavy?

I think it was really important for Laura to talk about this to a mixed group because often at She Says I feel like we’re a group of women sitting in a room discussing ‘womens issues’ (which I guess is part of the problem?). Everyone at She Says events is female and interested in changing the industry for the better. But to make any kind of changes we need outsiders/men to listen and get involved too. Feminism isn’t JUST for women, y’know? 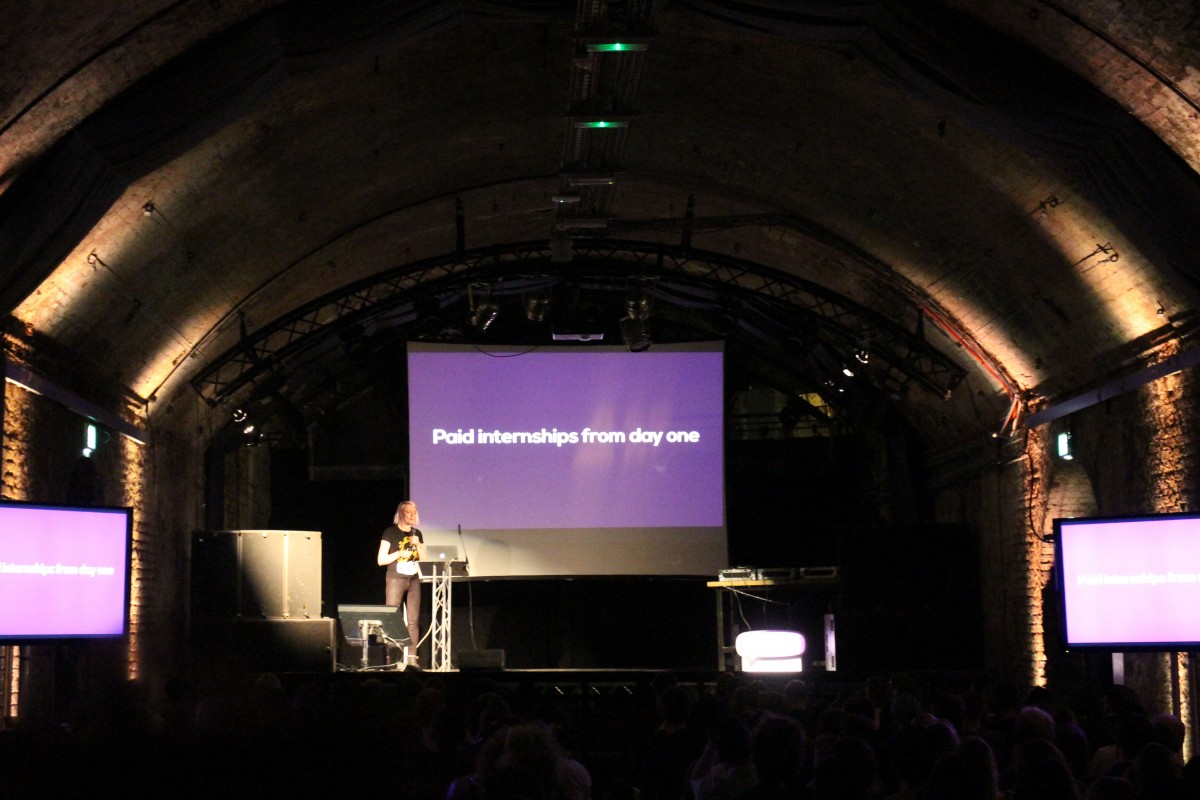 The last talks were from James Greenfield from studio Koto, a studio focused on improving culture via design. James talked us through the studio set up and then moved onto some work, explaining that ‘everyone thinks the logo is dead, but we think it’s the future’. He shared the development of the ‘controversial’ (Is it a heart? Is it a bum? debate) Airbnb logo, and how the brand colours were changed from blue (which the client thought was warm!?) to the red we are all familiar with now. 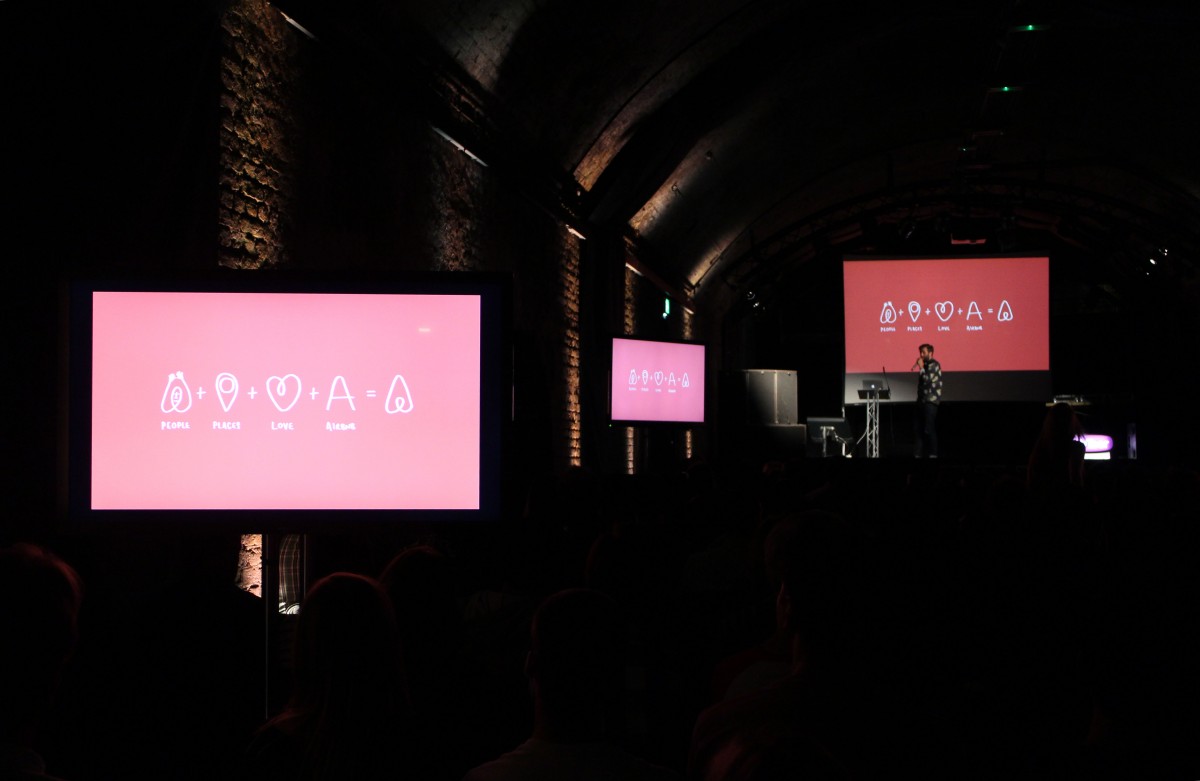 He also discussed modular typefaces & logos in branding for a new soup brand, Super Hi (the coding school) and Augustus Pili luxury shoes (at £400 a pop).

The final talk that I saw was from the guys at Music, a studio based in Manchester. The 3 guys gave us a flavour of what it’s like to work at Music, introducing a few members of the team with weird/entertaining videos/references/nicknames, whilst sharing some of their history and work.

From fit inducing flashing gifs to a google bot tour inside a building, these guys don’t take themselves too seriously! They even shared some of the comments they’ve received about their work over the years including ‘What a load of shit’ and ‘I expected better from a studio like Music’. I thought it was quite funny to share them, because as I’ve said before (in The People vs Graphic Design debate at CDW 2015) people are very quick to judge design even though they don’t know the story or reasoning behind it. 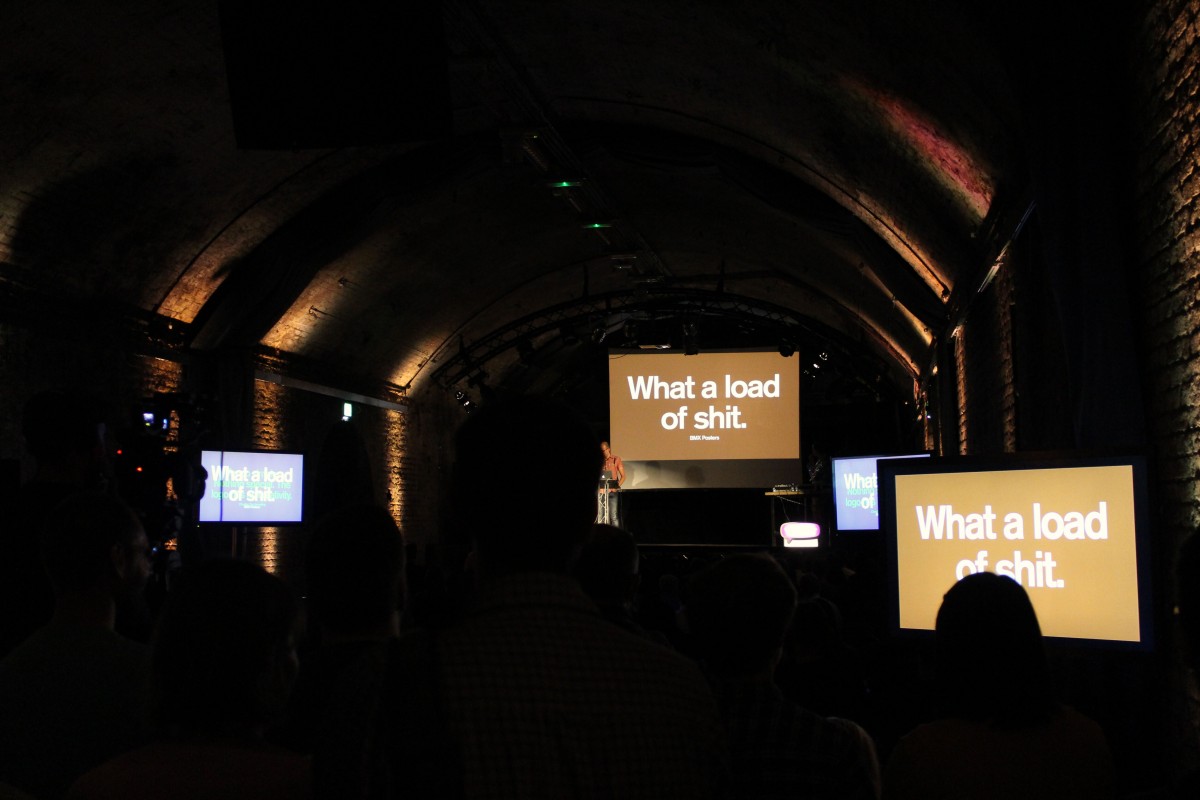 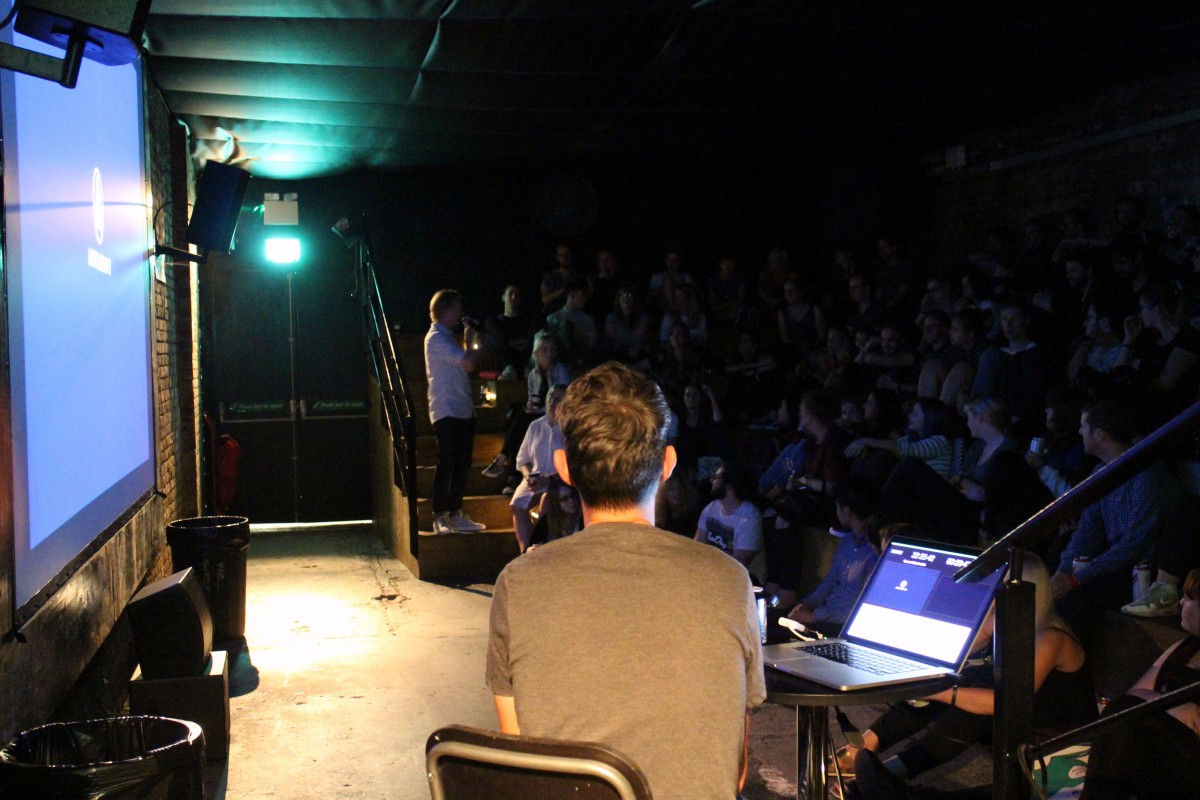 Last but not least, I managed to catch the end of the Q&A with Art & Graft in the cinema room – talking about moving image and relationships with clients. And then it was time to party/network. I spoke to the guys from Viber, a new app which is a mix between Whatsapp and Skype – from what I understood it’s conversations by ‘influencers’/events which people can join in with, so like message boards but real time chat. I also spoke to the guys from wework, who offer collaborative spaces to creatives around the world; 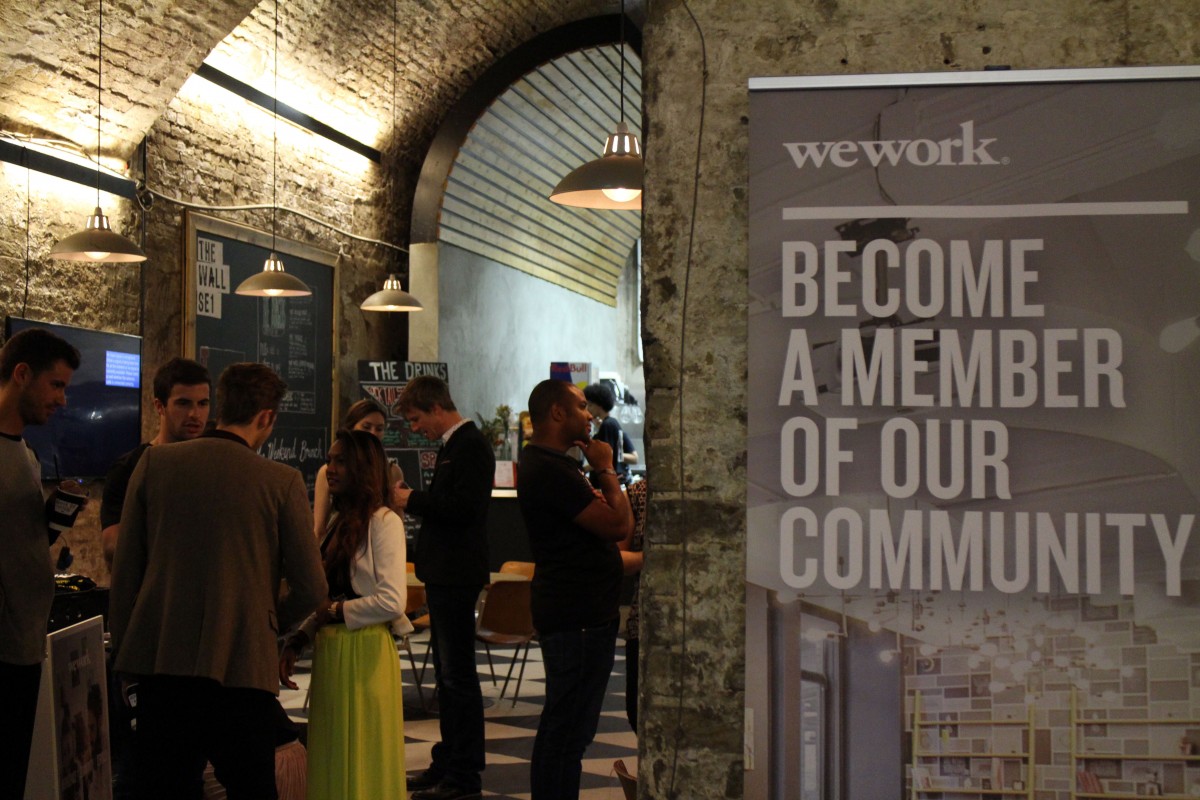 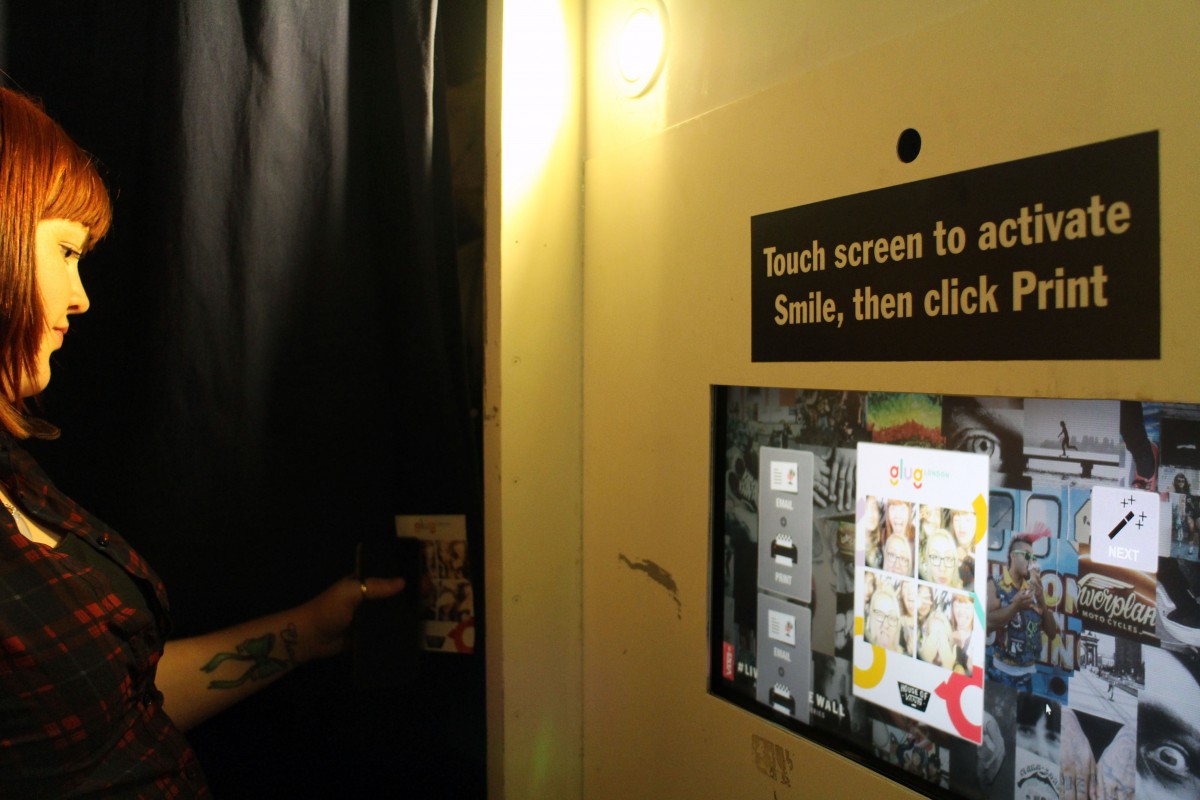 … and OF COURSE there was time for some photobooth action! Although I think we need some serious work on our poses… 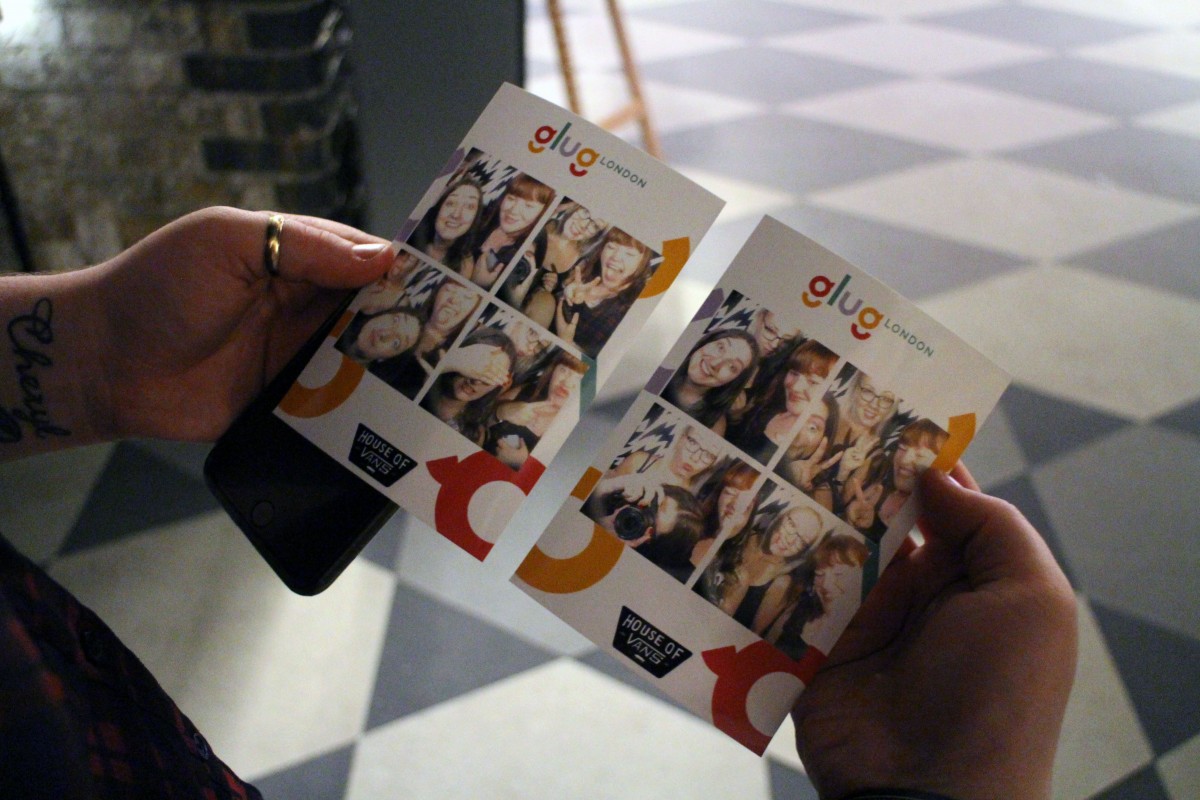 Overall I had a great night – my first glug was a success! There was ALOT of people and I did have to stand for half of the talks, but you can’t moan because it was a free event.

Thanks for having us glug, the super cool venue House of Vans (which you should definitely check out if you’ve not been before) and to all of the speakers for your words of wisdom – see you next time!