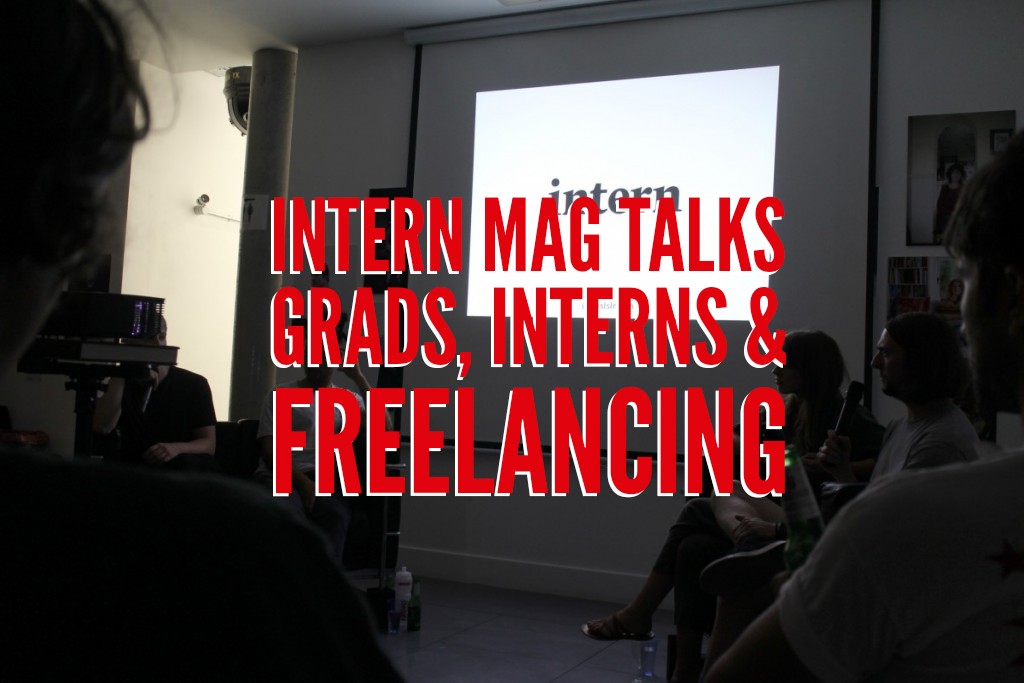 The other week I went to a talk hosted by Intern Magazine, who I posted about a few moons ago. If you’ve been reading my blog for a while you’ll already know my feelings on internships (I won’t go into a rant right now but see my screen printed Fresh Meat posters to get the jist ha) but if you’re new to the topic/debate then I’d definitely recommend you check out Intern magazine to get clued up. Born from a Kickstarter campaign ( which I supported ) in 2013, Intern is ‘for and by the creative youth’ – a voice for thousands of creative graduates trying to get their foot into the door. The magazine features interviews, discussions and debates the current industry practice and treatment of interns.

Now on Issue 3, Intern founder Alec, had rounded up 3 brilliant talents to talk all things ‘Graduation, Internships and Freelancing’. 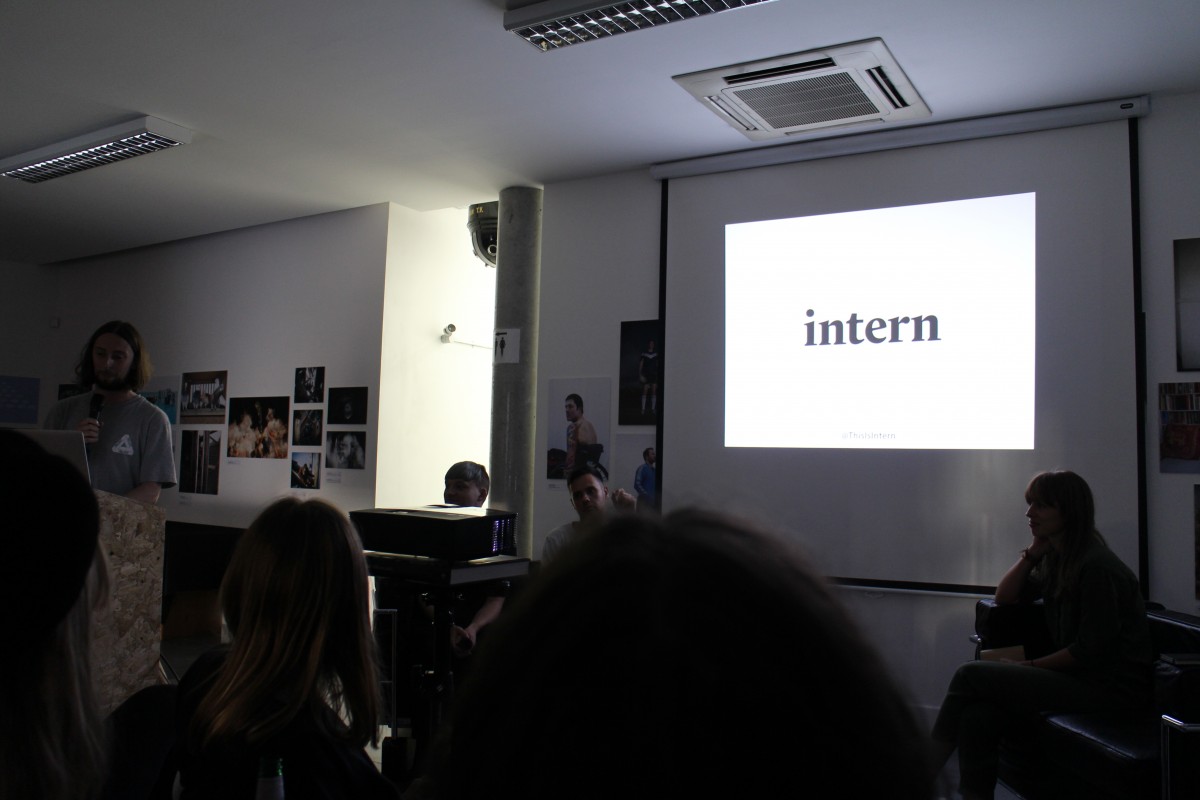 First to the mic was ‘The Nomadic Designer’ aka Daniel Cooper. 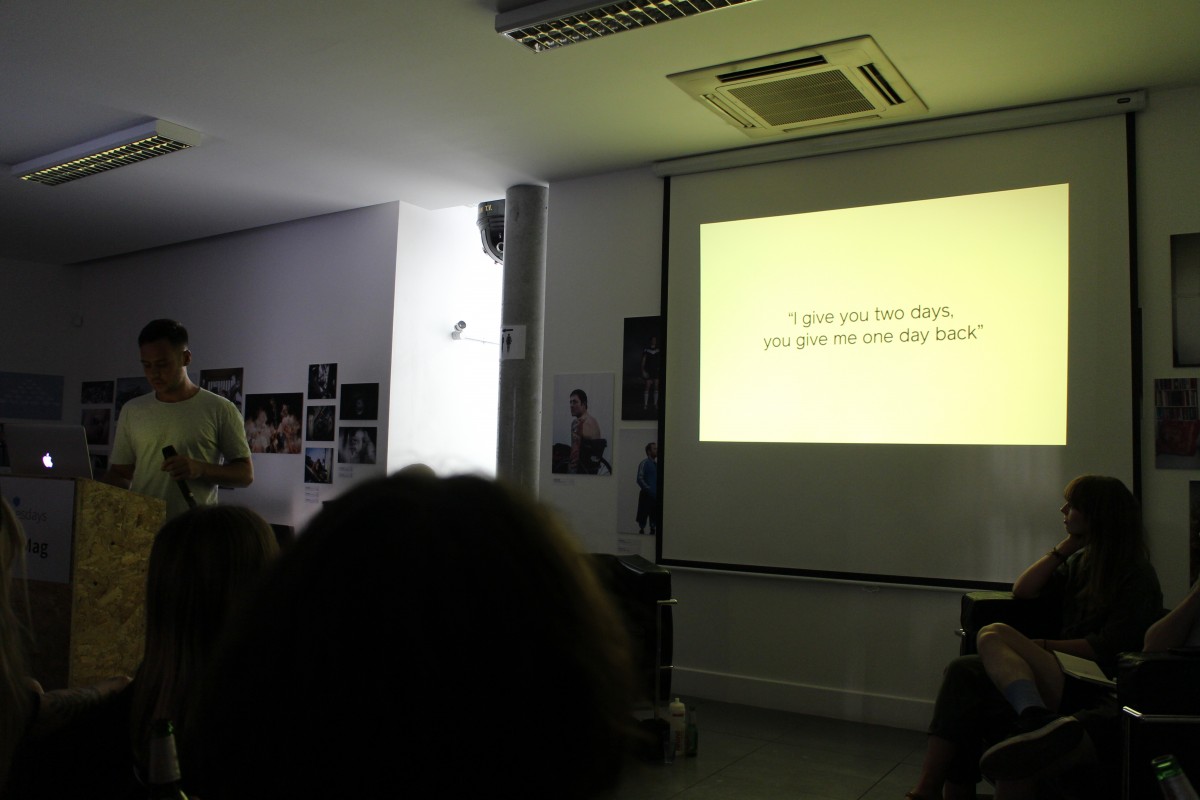 Inspired by Boat Magazine (who I talked about here), Dan set himself a self initiated project based on a nomadic lifestyle of travelling.

After receiving advice from the founder of Boat Magazine ‘If you’re going to do it, go big’, Dan engaged the interest of an Ad Agency to help him travel the world. The concept was to spend a couple of days helping different creatives rather than stay in one studio for a couple of weeks, which seemed to catch attention. It was something new and fresh, rather than the usual ‘Can I come and be your intern for a month?’.

Starting his journey in Iceland, Dan worked on briefs with designers in exchange for their knowledge/tour guide skills, passing through Istanbul, Belgrade, Zurich, Berlin and Copenhagen to finally end in Amsterdam. Dan shared some great anecdotes from his travels including a variety of  culture, people, creative disciplines and travel nightmares. Sounds like it was a character-building trip of a lifetime and although it had it’s ups and downs, has managed to help Dan stand out from the crowd. He explained how he felt lucky to escape the apparent ‘internship culture’ of graduates fighting over internships, travelling whilst the rest of his course prepared for battle.

Dan’s tips:
– Approach people with a different perspective: Catch their attention and appeal to their creativity.
– Take it one step at a time: He didn’t plan everything before he set off which left room for some spontaneity and kept things fresh.
– Keep it a simple proposition: A lot of the studios that he received replies from had actually ignored his previous ‘standard intern’ emails. The fact that he was offering a bit of his time for a bit of their knowledge was refreshing and sealed the deal.

A great story and example of a non-traditional route that paid off – Dan now works at Boat Magazine funnily enough! 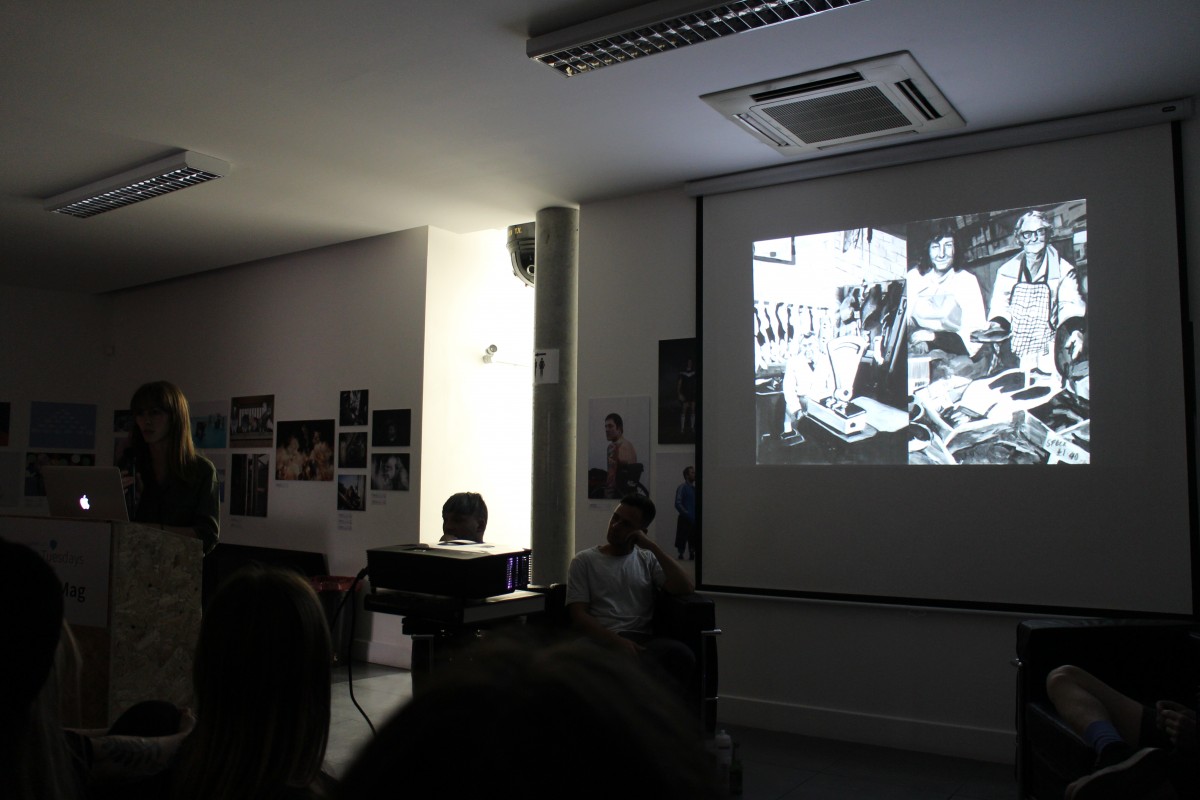 Second to the stand was Alice Tye, sharing her experience as a freelance Illustrator and intern at Camberwell Press. I found the Camberwell Press concept very interesting indeed! Graduating students at Camberwell can apply to intern at the Press, a fully functioning studio, for a year’s worth of experience(2 days a week). The premise being that Interns can gain experience of the industry with the guide of the Camberwell tutors. Everyone in the studio is an Intern, creating a level playing field, and can use the rest of the week to freelance or work to support themselves financially. It’s basically like an apprenticeship of sorts.

It sounds like Alice really enjoyed her time at Camberwell Press, as she actually stayed on for an extra 6 months to help ‘coach’ the next generation of interns and to organise an exhibition.

The Camberwell Press concept sounds amazing on first glance, but I do have a few concerns that pop up in my head; If everyone is on the same level how do you learn about the hierarchy in a studio? How can you fully learn about your place as an intern? The studio is run by Camberwell tutors, who I’m sure have plenty of experience and knowledge of the industry, but they’re still tutors so do they have an educational head on rather than an industry head on? Being at University is a bit like being wrapped in cotton wool, until you graduate and are thrust into the cold cruel world. It seems like this internship is kind of just delaying the release of grads into the real world. Some might say it’s easing them in, but sometimes you have to be cruel to be kind? Anyway, that’s just my thoughts from experience. 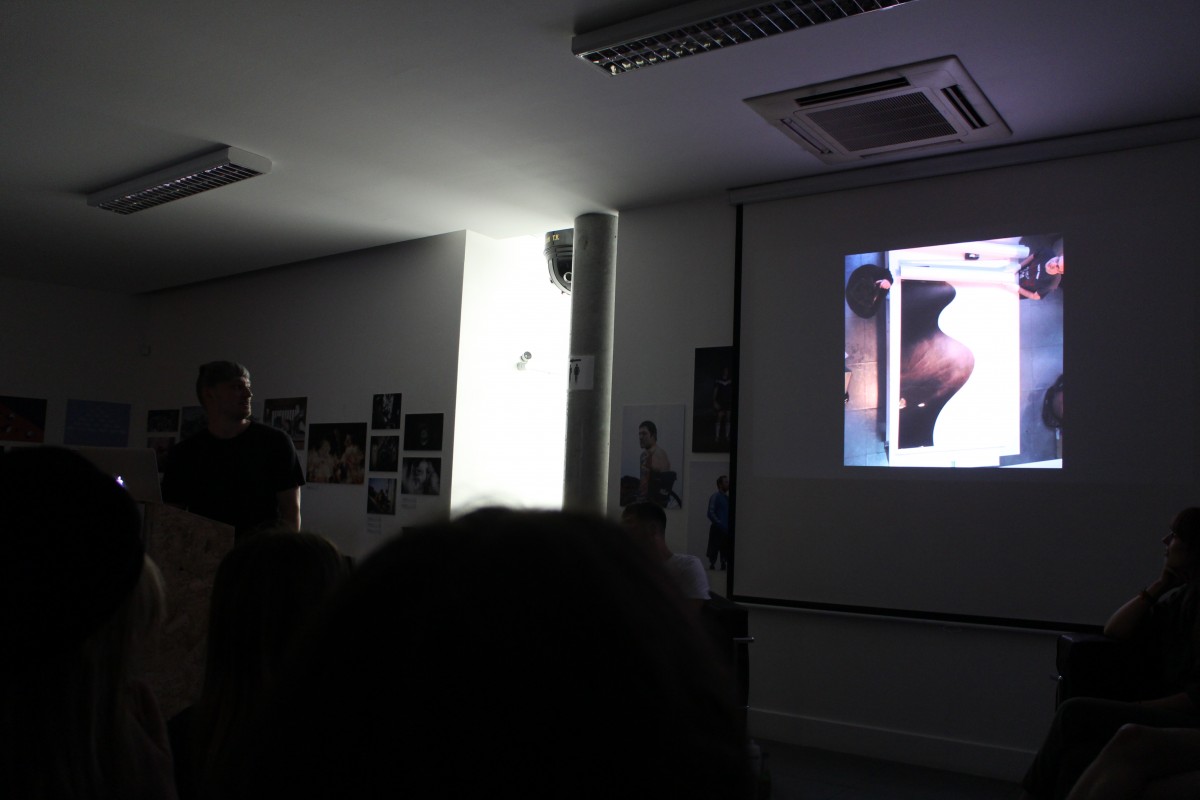 Last to speak was Photographer Luke Evans who after interning, decided that it wasn’t for him and became his own boss. A Graphic Design and Photography student, Luke experimented with unusual materials and struck gold.

Using cardboard, baking soda, flour and a bit of Photoshop Luke creates amazing landscapes that look like something from out of this world. He explains that a lot of the time he doesn’t get ‘the shot’ until 1251st picture, but his perseverance and determination definitely pays off. After all, it’s not everyday that Charles Saatchi wants to buy all of your work. Yep, he wrote his first invoice to Saatchi! It’s a crazy world that we live in…

Luke on…
– Internships: They’re really helpful for figuring out what you do and don’t want to do. You won’t know until you try it though!
– Being his own boss: I decided working for someone else wasn’t for me, so I moved back home to Wales and got my own studio.
– The Internet: Without it, none of this (his success) would be possible. You don’t need to live in London thanks to the internet!

And then there was a bit of time for questions…. 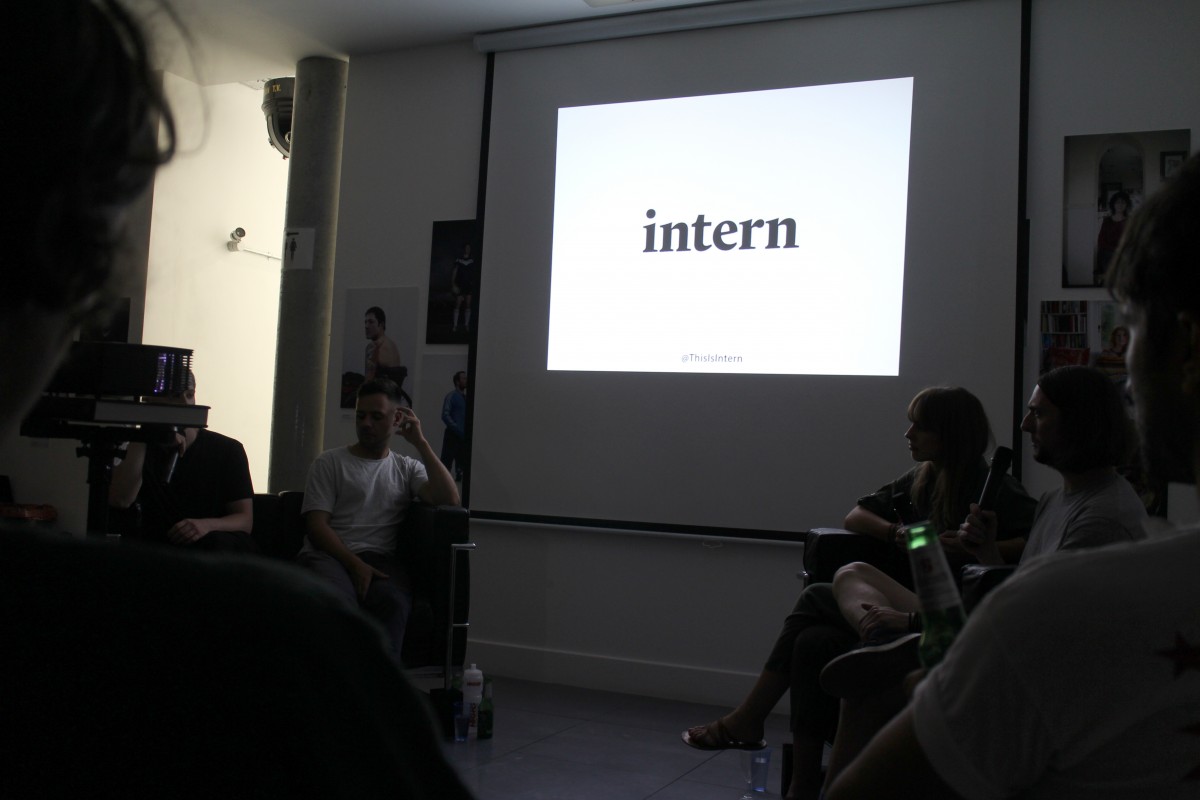 How valuable is an internship?
Alice – Not necessarily as essential for Illustrators due to other skills
Luke – I wasn’t prepared for industry by my time at University. Sometimes working for free is a necessary evil to help you build up your confidence or contacts. It’s a trust thing, knowing that something else could come from it
Dan – It’s rarely worth working unpaid. If they’ve approached you it’s an instant ‘Fuck off!’. You should gauge the client; don’t work for cheap for a shit client. The test is to meet on mutual ground (a cafe) and see how they treat others ‘serving’ them as you will be. If they talk down to them with no respect then you can probably guess they will do the same to you.
Alice – It depends what your role is… is it worth working for free or is it going to be a shit experience?
Luke – Take the risk. Do your research and speak to other interns about their role, way they were treated etc. Assess if it’s a stepping stone to get you somewhere else.

Unpaid internships: Looking at the wide picture… does the current situation mean that only the rich afford to be interns?
Dan – Diversity needs to start at University really – people from different backgrounds.
Alice – This is the major benefit to part time internships – you can support yourself whilst learning.
Luke – Internships are a luxury item because not everyone can afford them. There is a feeling of guilt around getting support to intern.

Is Uni preparing young creatives for industry?
Dan – My course was always so industry lead, which as students we didn’t appreciate at the time but looking back now I do. The tutors were very harsh, always telling us ‘You won’t be able to handle it’ – it was like a Devil wears Prada worst case scenario.
Luke – It felt really weird to sell my work because up until then I was just doing my work. Especially with my first sale being to the Saatchi gallery – I can’t just write my invoice as number 1. I didn’t even know how to write an invoice – that is a skill you need to know. How many 0’s do I put in front of the numbers? I don’t know how many invoices I’ll be writing…

Let’s talk about freelancing – how does it work?
Dan – Most of my freelancing was through word of mouth – a friend of a friend. You have a different mindset to being in-house; you’re known as ‘the freelancer’ and left out of meetings. You do get paid more though – that’s a bonus!
Alice – I sent out over 200 emails and received only 4 replies, but they proved to be valuable. (Quality not quantity!)
Luke – A lot of creatives are getting work via Instagram nowadays – it’s a thing.
Dan – Twitter is also good for finding freelance jobs. I replied to a tweet and got the job just because I was the first person to reply and send my portfolio over – I stayed there for 6 months in the end. Use twitter wisely… I love Morag Myerscough’s account. She just posts random colours. I don’t know what she’s upto but it’s been going on for about 4 years now and I can’t wait to find out.

Best career advice given to you?
Dan – Meet your clients. Check them out and make sure they treat people nicely.
Luke – Be outward facing and open to criticism. Just show your work to as many people as you can!
Alice – Say yes to as many opportunities as you can for contacts and future opportunities – who knows where it could lead?

A great discussion with SO many points and things to think about. It was really good to see and compare the different routes – it definitely reinforced for me that we are all individuals and there’s not a ‘One size fits all’ for us. That’s the beauty of creatives – we’re all unique!

Thanks to the speakers and to Intern for being a great host. Check their website and magazines out for more info and discussion on Interns. What’s your opinion/experience with internships? The debate is open so let me know…

Taking the words right out of my mouth...

#The100DayProject: Global Meet Up in LDN