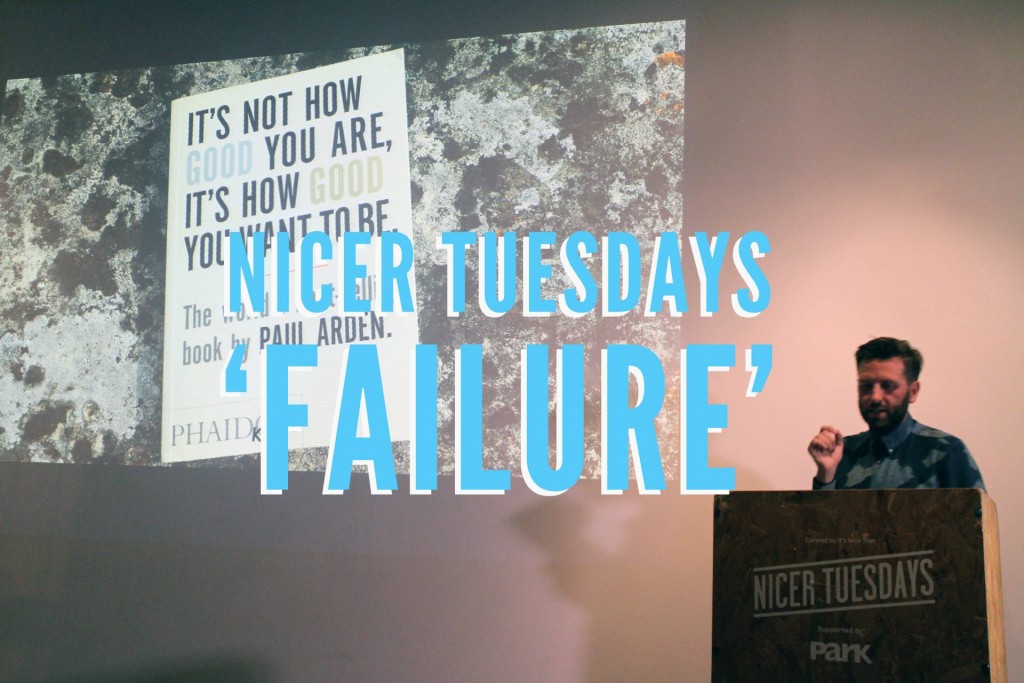 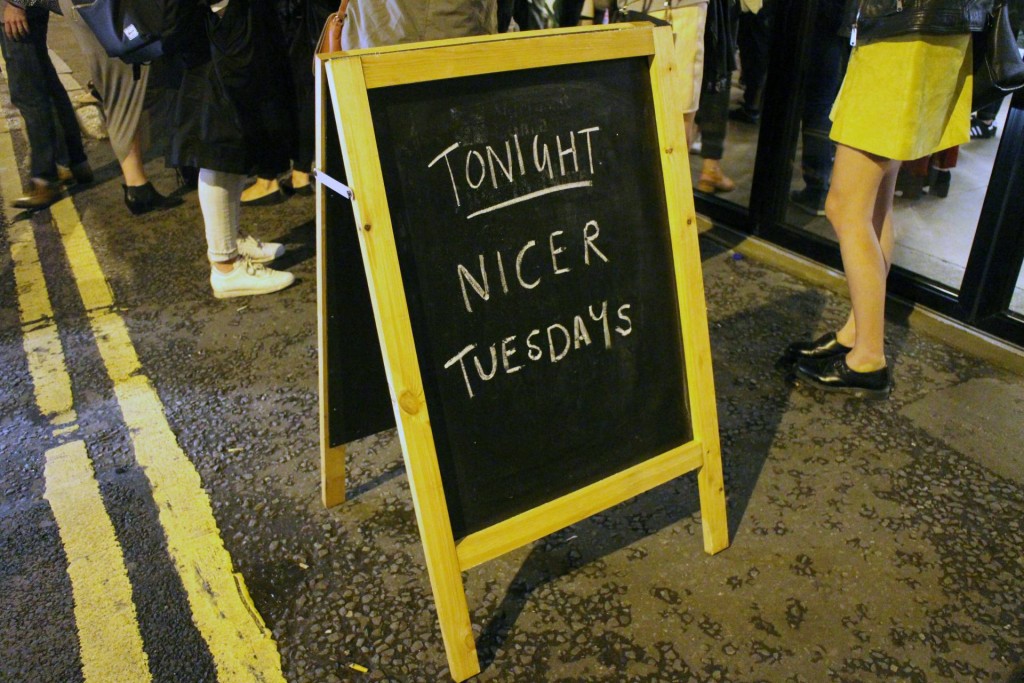 A couple of weeks back I went to one of the Nicer Tuesdays talks with Jo and Natalie from the studio. Hosted by It’s Nice That at the Protein gallery space, each talk has a different theme, with this one focusing on ‘failure’.

I hadn’t originally planned to blog this talk, but decided to post about it in the end as I think it’s a really important topic and it was a brilliant talk. As always, my notes are briefly and scribbly so this is what I can translate from them – I really need to get a dictaphone or learn shorthand or something… 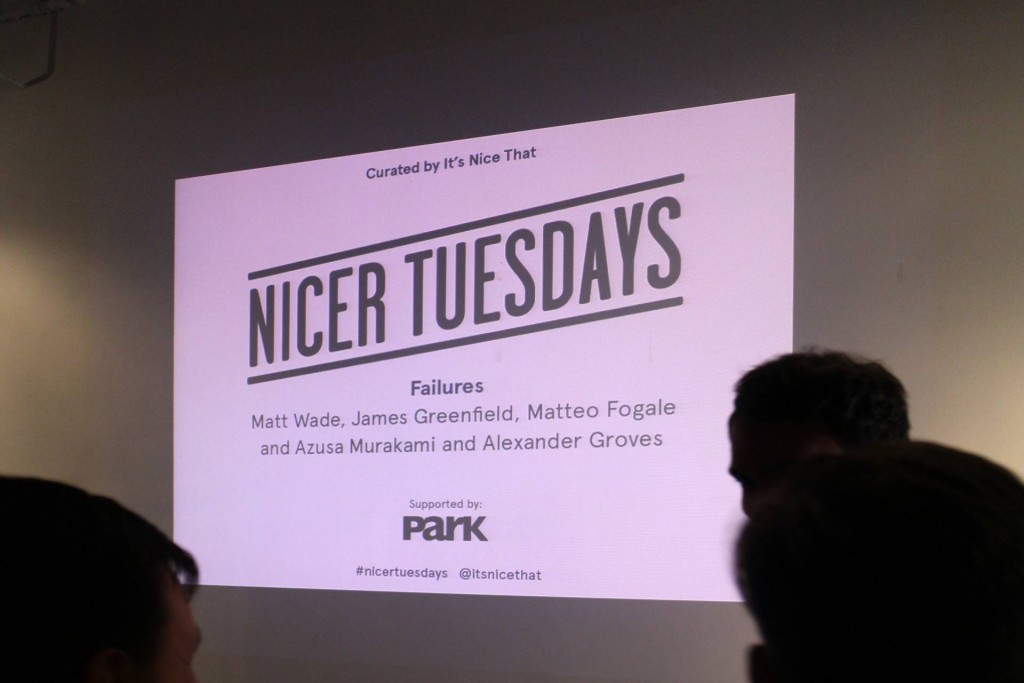 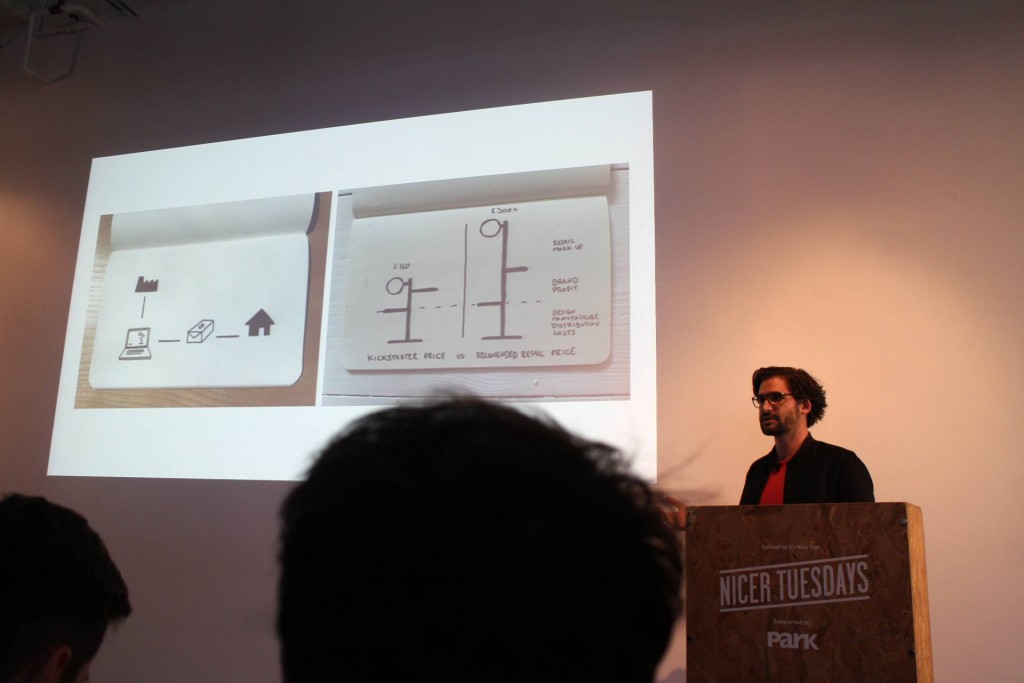 The speakers were a mixture of creatives, from product designers and entrepreneurs to graphic designers.

First up was Matteo Fogale, a product designers who began a Kickstarter for his furniture venture which was 122% funded. Matteo spoke about learning everyday with the business side of things, and even though the product was delivered 3 months late, they did it! Originally they had aimed to produce 50, but made 125 in the end. However with all of the money spent & all the products sold, Matteo closed the online shop & company. Ending his talk, Matteo explained that he ‘Tried and will try again. We learn from our mistakes’. 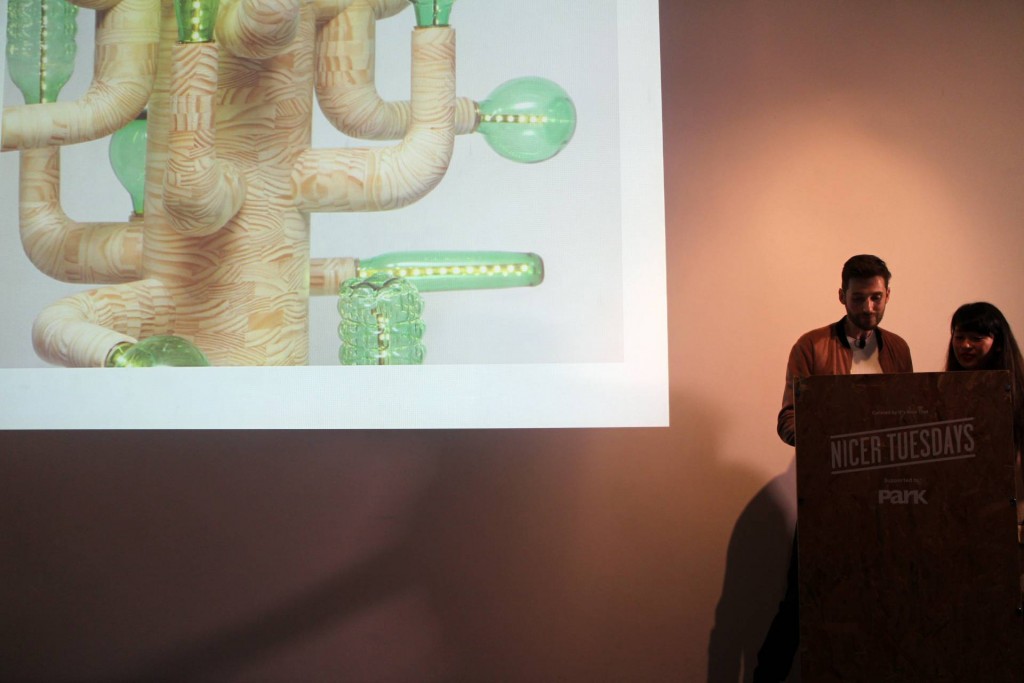 The duo had been on stage for less than a minute before admitting their first mistake – the name of their studio. They explained how after graduating they were up against really good design grads in London so they made a decision – they needed to either get better or leave London. They left for Sao Paolo…

In Sao Paolo they spent a lot of time walking around, which lead to keeping a blog of unusual things they saw on the streets. What they discovered was that people are very resourceful and will collect and recycle anything and everything to make something else. With this observation, they decided to recycle some cans to make furniture… It didn’t really turn out how they had expected, but these guys are VERY determined and seem to be able to turn every situation into something good. It sounded like they’re actually unstoppable and had the audience confused and amazed at every corner and turn of their story.

They also experimented with human hair from a hair market in china and plastic collected from the ocean, fully embracing new and extraordinary methods. ‘The mistakes are what made the furniture unique’ & ‘If it was easy it would have already been done.’ 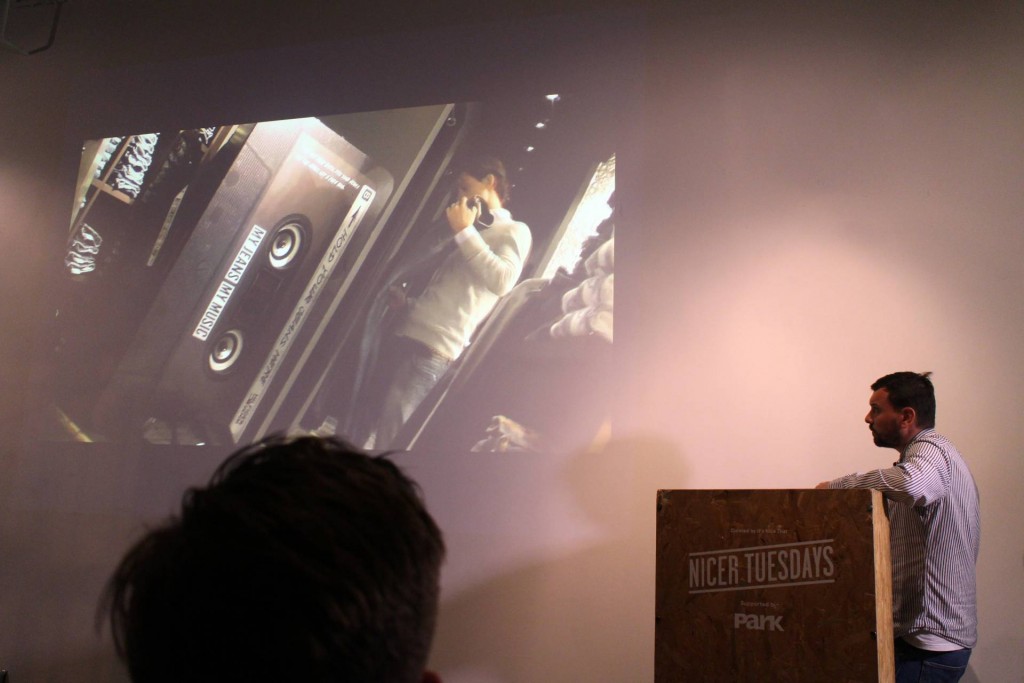 Third to the stage was Matt Wade from Kin Design who admitted: ‘Everybody says ‘learn from your mistakes’ but it gets tiring’.

Sharing some of his ‘failures’ with us, Matt talked us thorugh D&AD flags that couldn’t stand up, the end of a 30 day programme trial and sending brand new Nokia phone prototypes (1 of 2 in existence) into the air… and losing them, both.

He also spoke about that time when he had hired a guy that said he’d drawn Jessica Rabbit… to later discover he hadn’t drawn THE Jessica Rabbit, just a shit version – nobody had checked!

And to end, Matt shared a project which they don’t talk about in the studio… an unspeakable. After working on an interactive experience for 38 Tommy Hilfiger stores across Europe, it was time for the big launch! On the launch day all of the stores opened… and the stores were met with this screen: 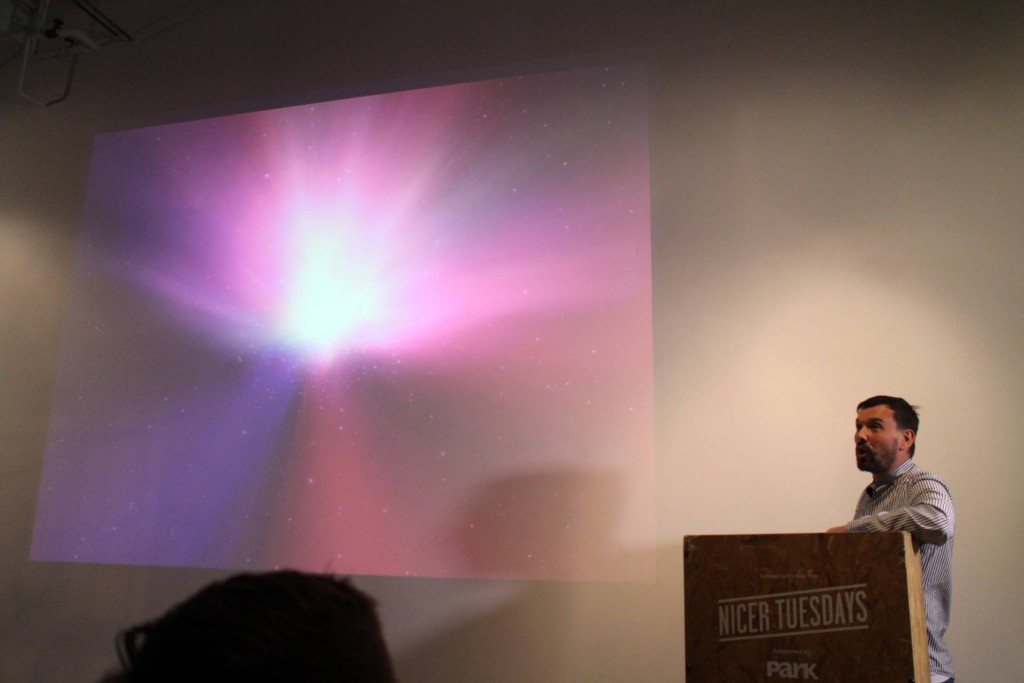 … the screensaver of dooooooom! For all 38 stores, the guys had forgotten to disable the screen saver. They had to send someone across Europe to repair and reset all of the technology – oh dear!

Last but not least, James Greenfield of Studio Koto shared his 10 tips to embrace/avoid failure with a talk entitled ‘How I learnt to be better by being rubbish at first‘ : 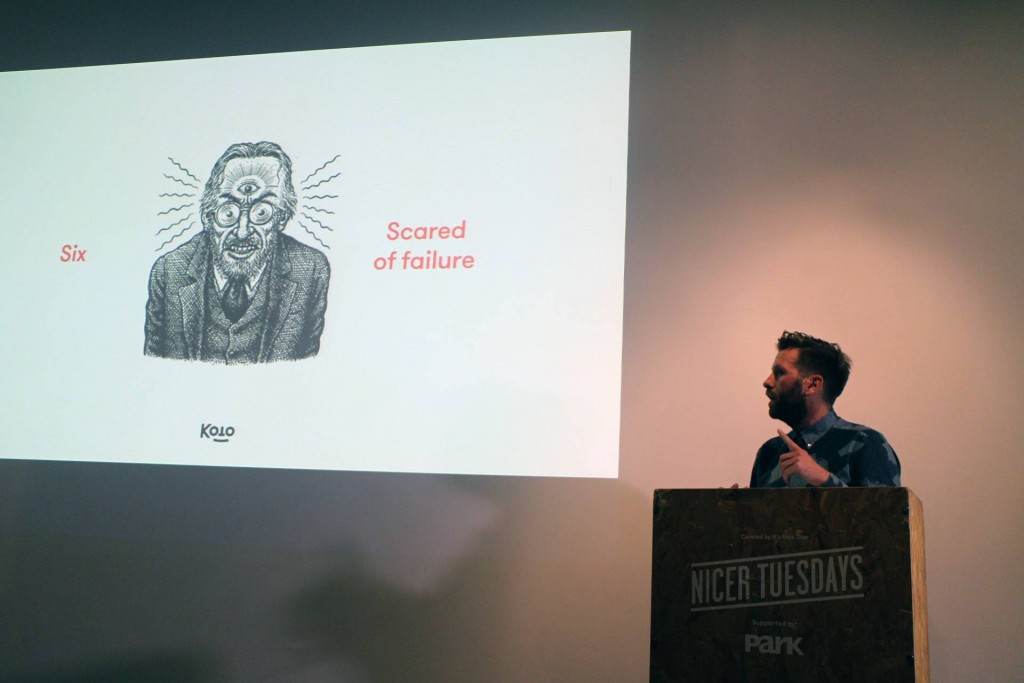 James recommends Paul Arden’s book It’s not how good you are, it’s how good you want to be – which I have since read and thought was great for thinking and questioning. 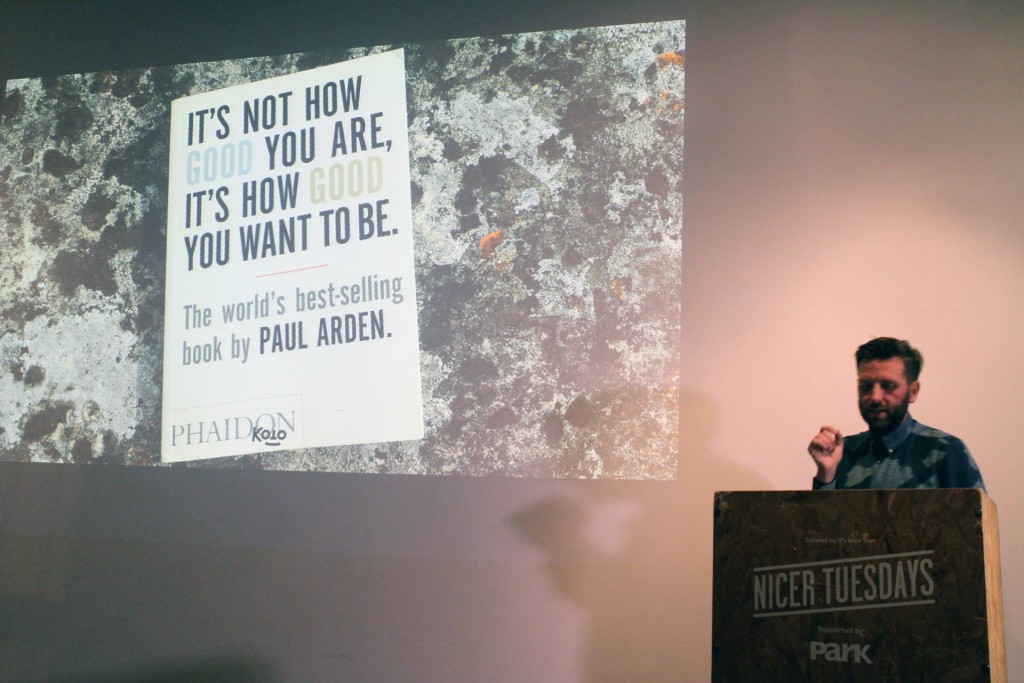 If you haven’t been to one of the Nicer Tuesday talks I’d 100% recommend it – the topics are always very interesting. They usually happen towards the end of the month, so keep your diaries open and eyes peeled for tickets as they go like hot cakes! What did you think to the stories about failure? Has it made you feel determined or deflated?