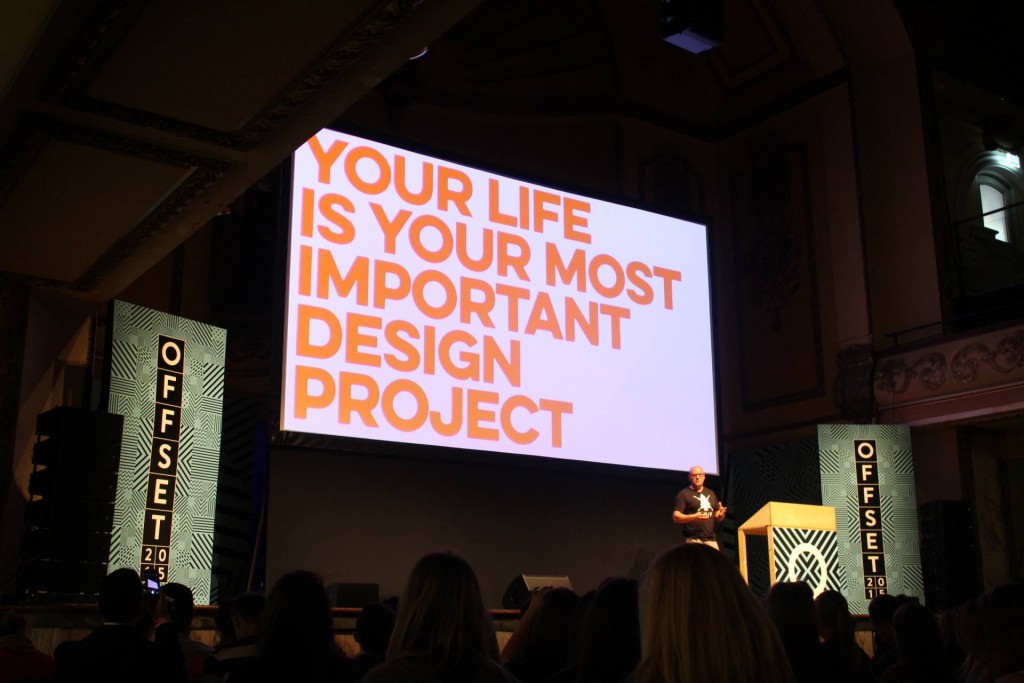 It feels so long ago now, but the other week I spent 2 days at Offset London ‘festival’. Offset usually takes place in Ireland, and after hearing that it would basically be on my doorstep in London I was determined to get my hands on a ticket.

Having already decided that I was going to hand my notice in at this point, I knew I wasn’t going to be able to afford the £200 ticket price BUT luckily Computer Arts came to the rescue, choosing me as a winner of a ticket via twitter! Did I mention that I love social media?

So after persuading my boss to let me have 2 days off work unpaid, I was SO happy to be heading to Shoreditch Town Hall on Thursday morning rather than my desk… So as I took like 20 pages of notes I’m not going to include all of them in this post, but a few quotes & I’ve also finished my vlogs so you can watch those too (DAY ONE & DAY TWO). BRING ON THE INSPIRATION:

Just as I was taking this photo I bumped into Liz, a fellow creative blogger, and her colleague Elsa who were also attending Offset. Luckily for me they adopted me so I wasn’t alone all day… 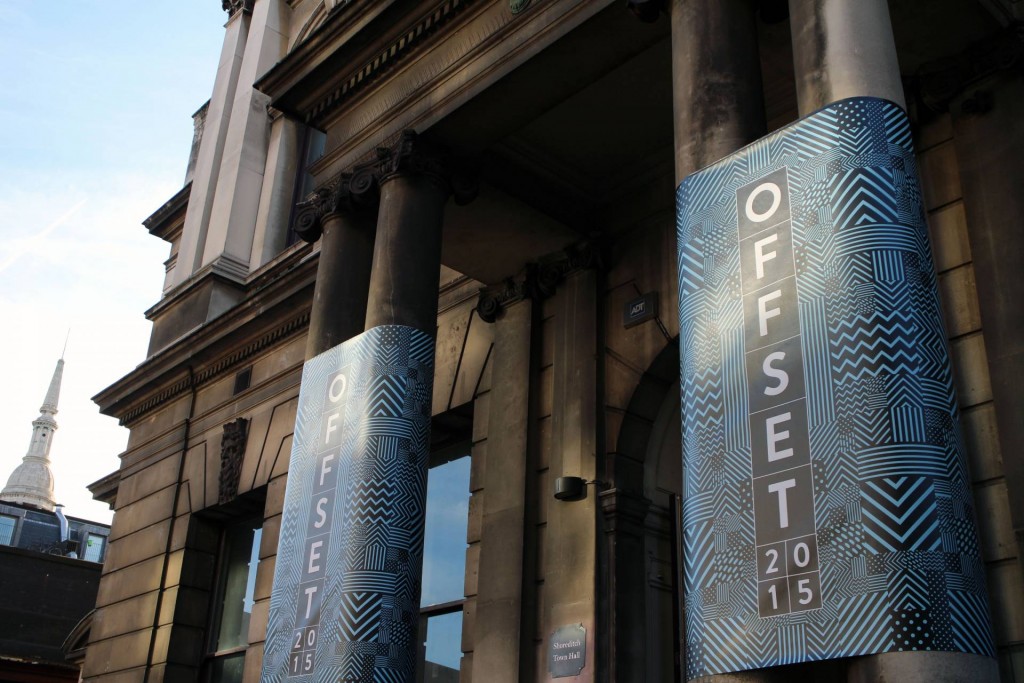 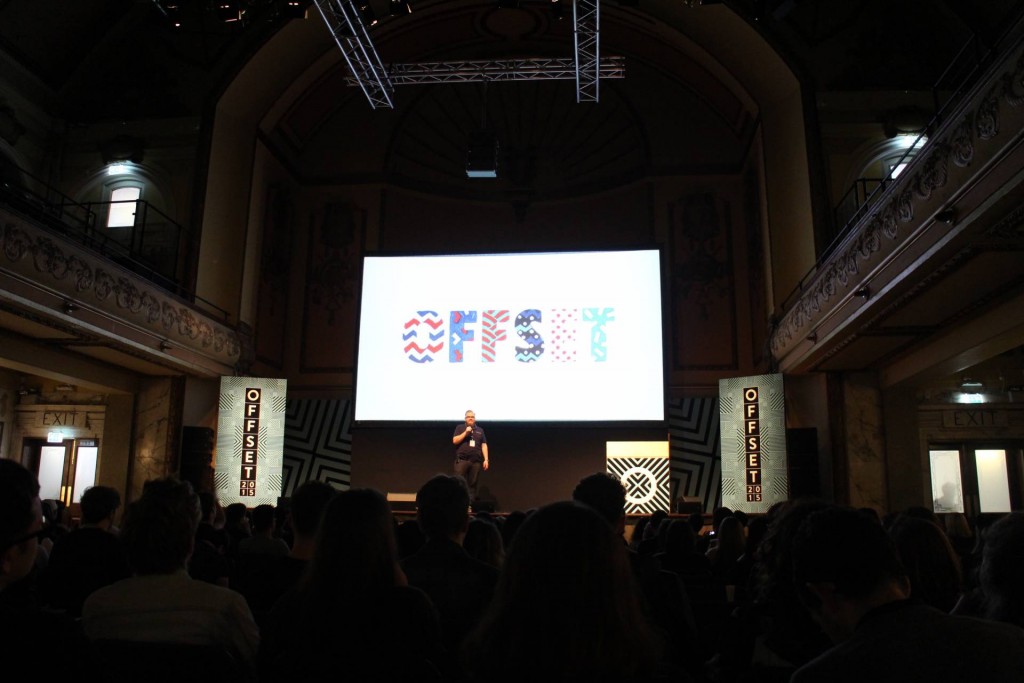 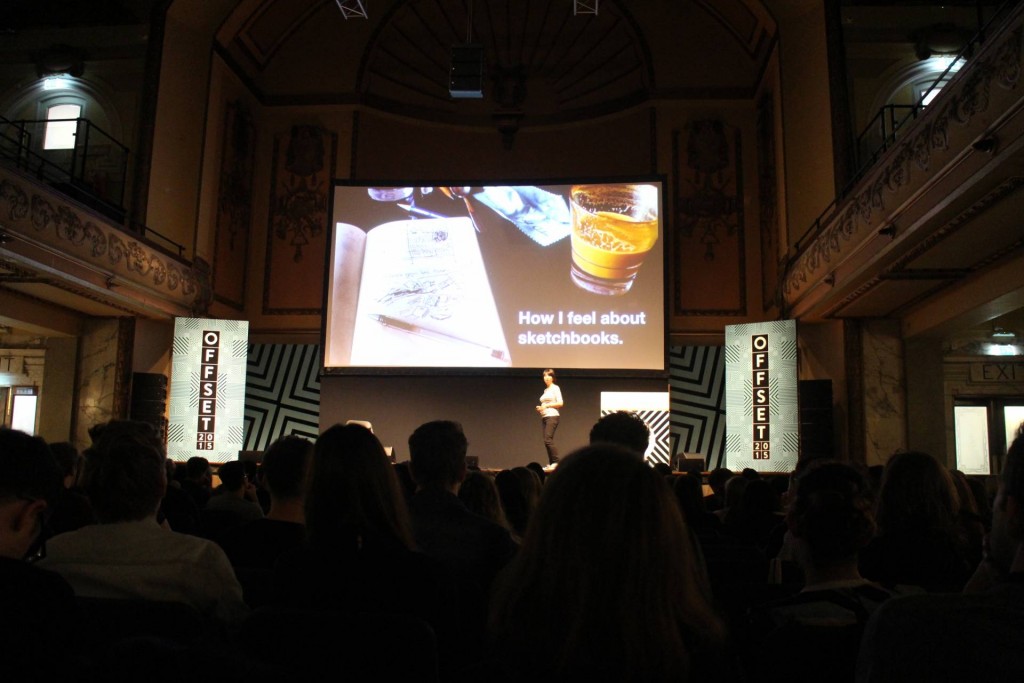 Yasmeen Ismail
‘Growing up in a small Irish fishing town, I didn’t know what to do with myself. I wanted to be a millionaire/animator/comedian. It didn’t occur to me that Illustration is a job.’
‘Be fearless – just do it, like Matisse and Warhol.’ 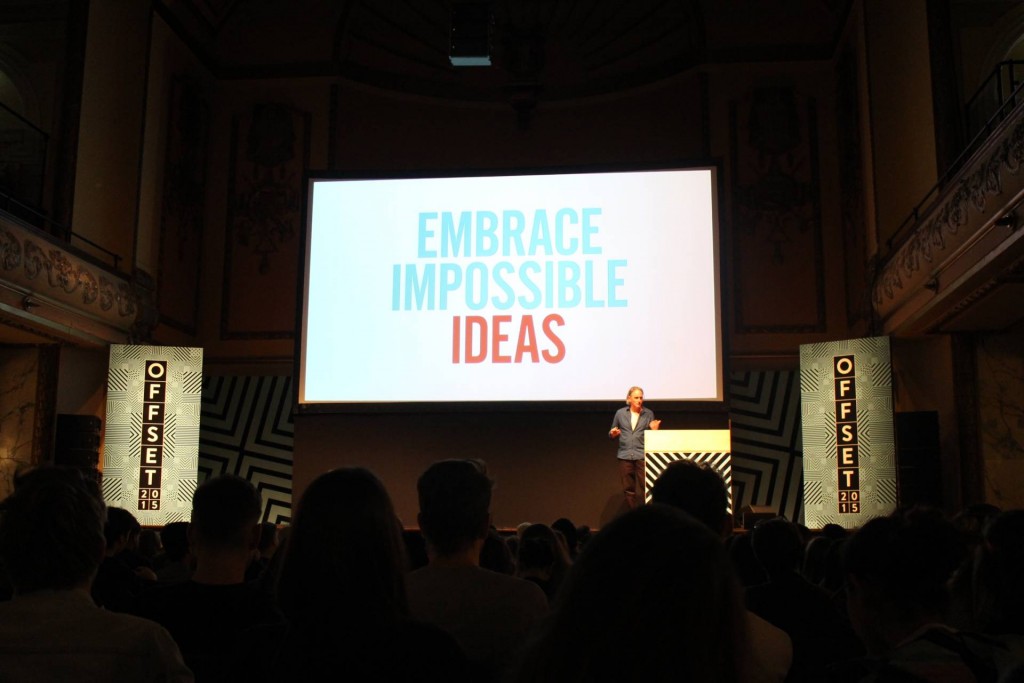 Erik Kessels, KesselsKramer
‘Make an idiot of yourself at least once a day’
‘If no one hates it, no one loves it’
‘Embrace impossible ideas’
‘A good idea has no border’
‘Mistakes are good’ 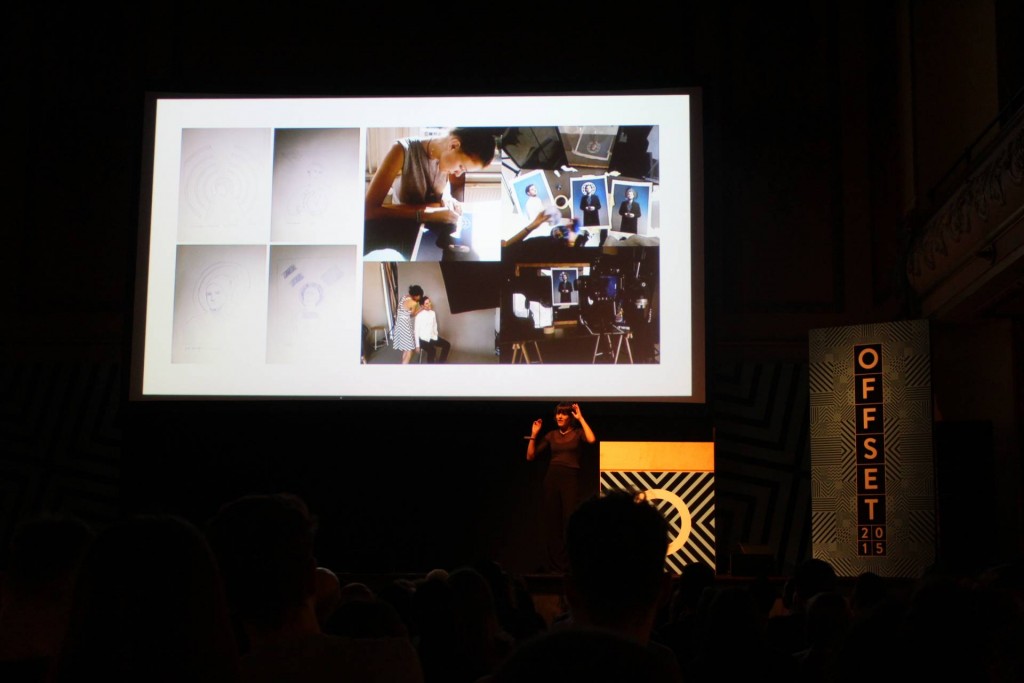 Aisha Zeijpveld
‘Freezing paper inside ice cubes seemed impossible, but you have to try it to find out. It turned out great in the end actually!’ 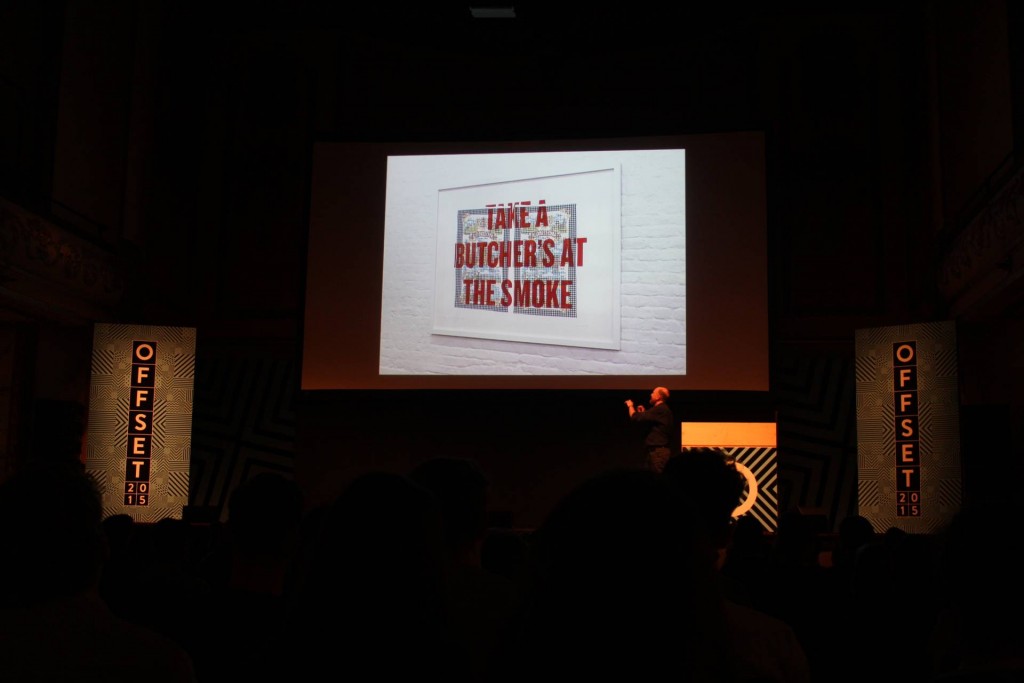 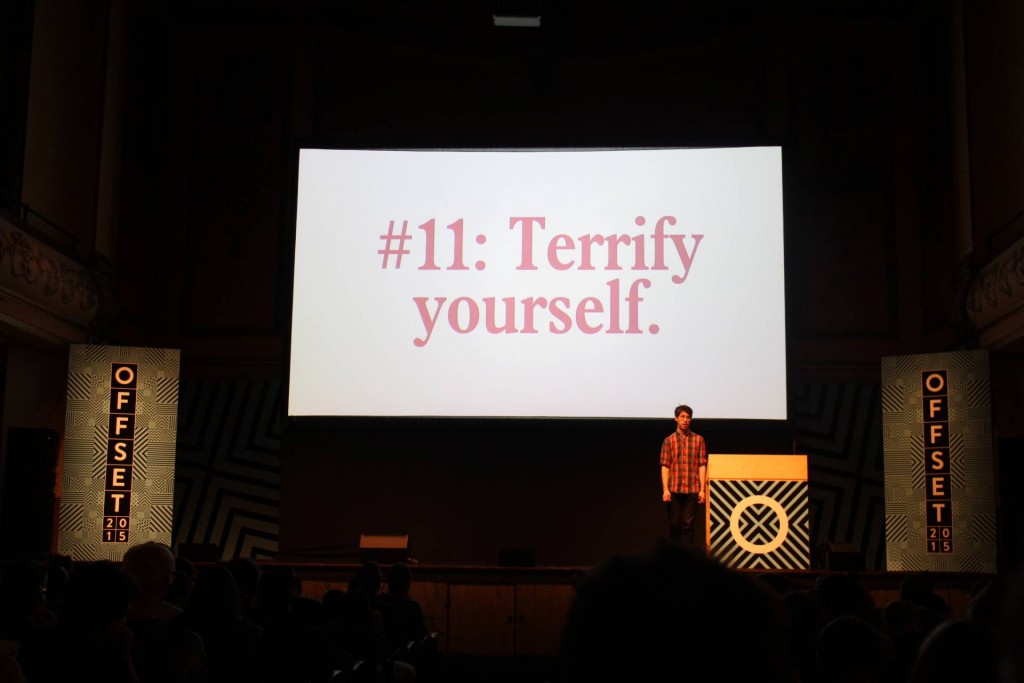 Johnny Kelly
‘Sometimes just jump ahead and make stuff rather than getting stuck in your sketchbook.’
‘Lists are helpful.’
‘Constraints are good.’
‘Terrify yourself.’ 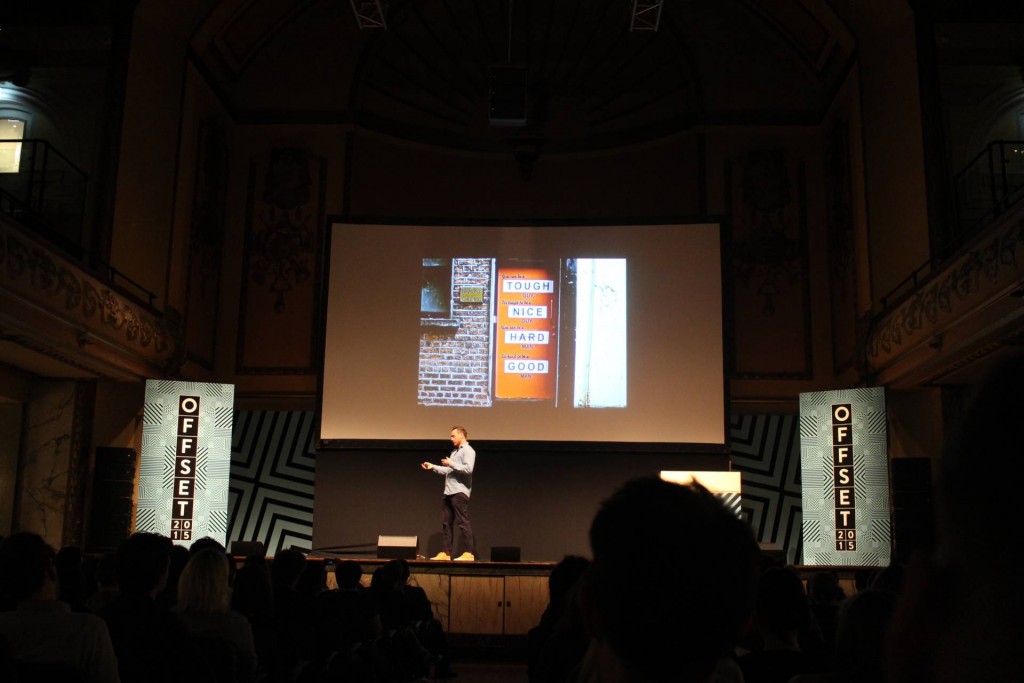 Maser
‘I wanted to be an artist but I was afraid.’

After an inspiring first day, I was even more excited for day two at Offset. I bumped into Ross, a fellow Lincoln GD grad, which was nice to catch up and have someone to discuss the talks etc with. 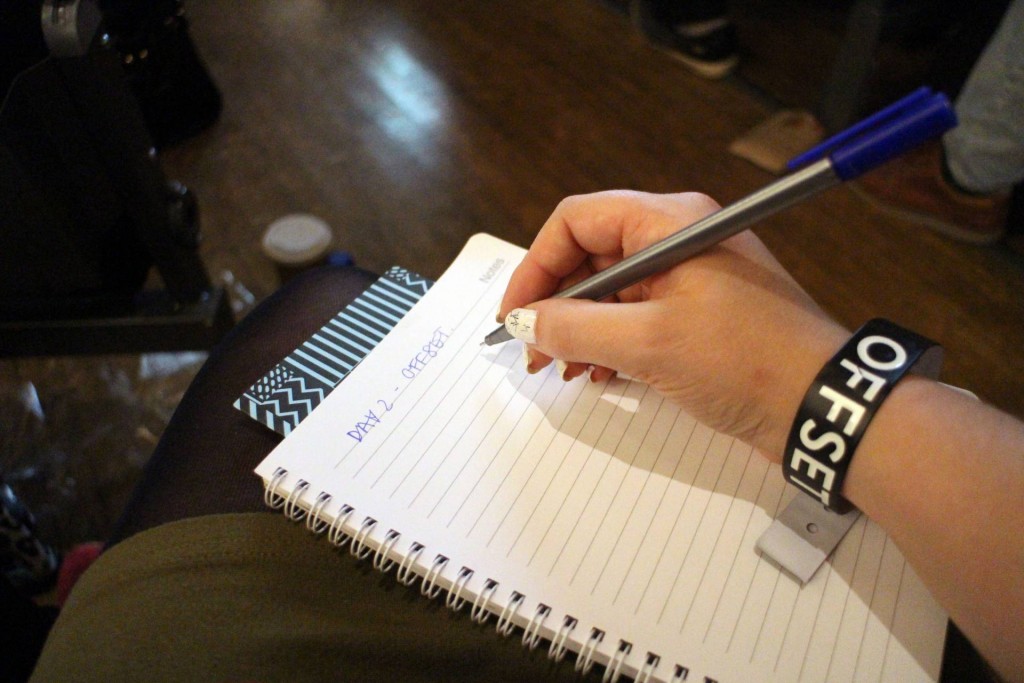 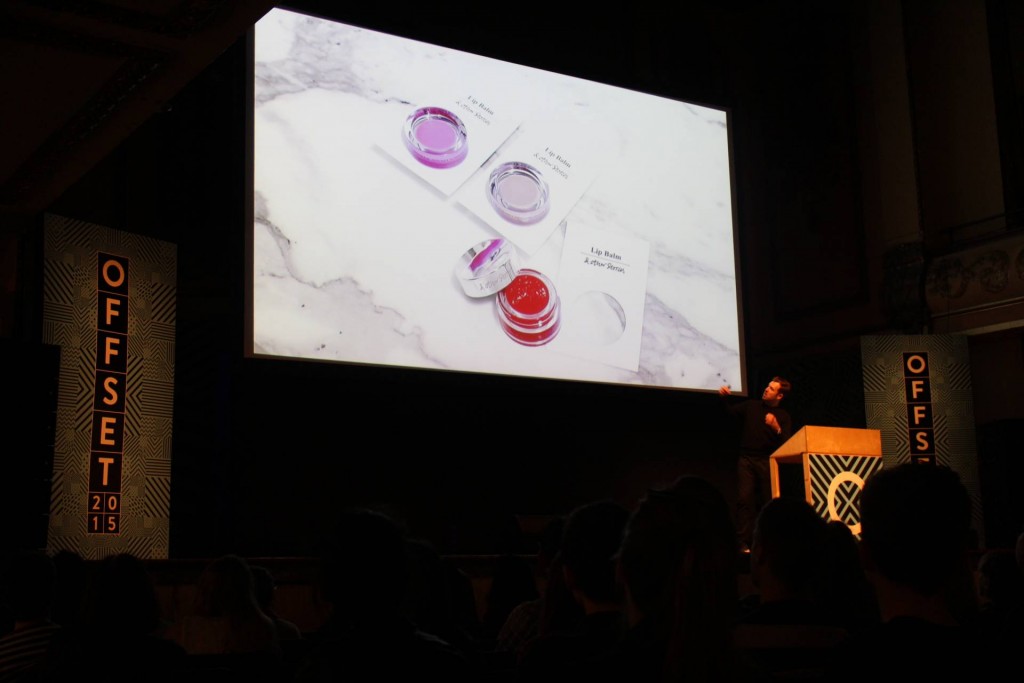 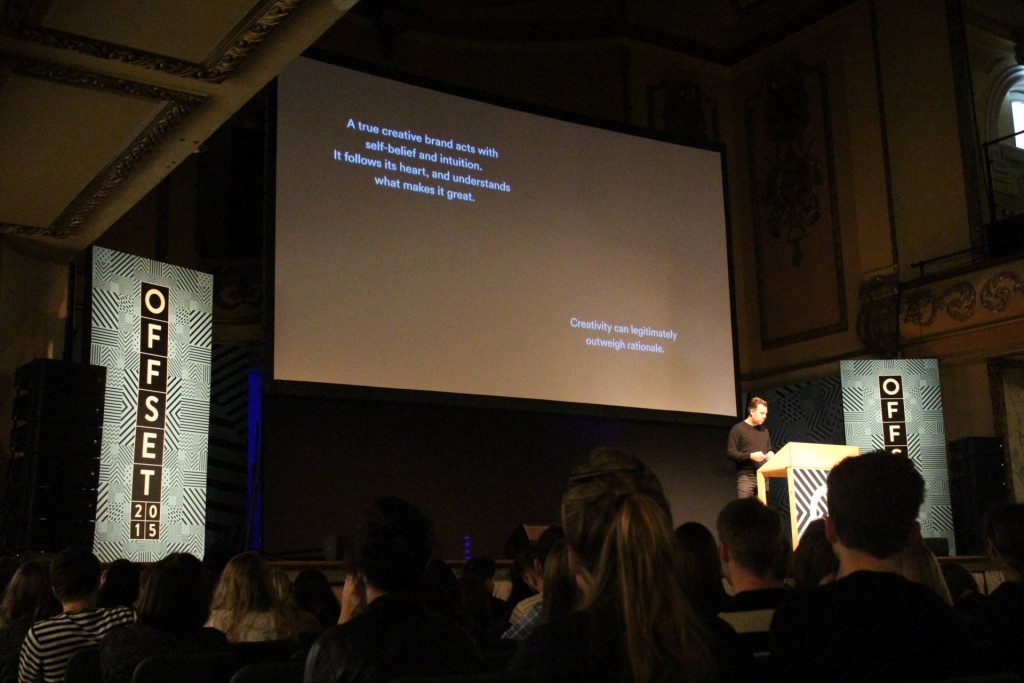 Paul Austin, Made Thought
‘A true creative brand acts with self-belief and intuition. It follows its heart, and understands what makes it great.’
‘Creativity can legitimately outweigh rationale.’
‘Don’t always just answer the brief – go further!’
‘You’re only as good as your client.’
‘Always look up, not over your shoulder.’ 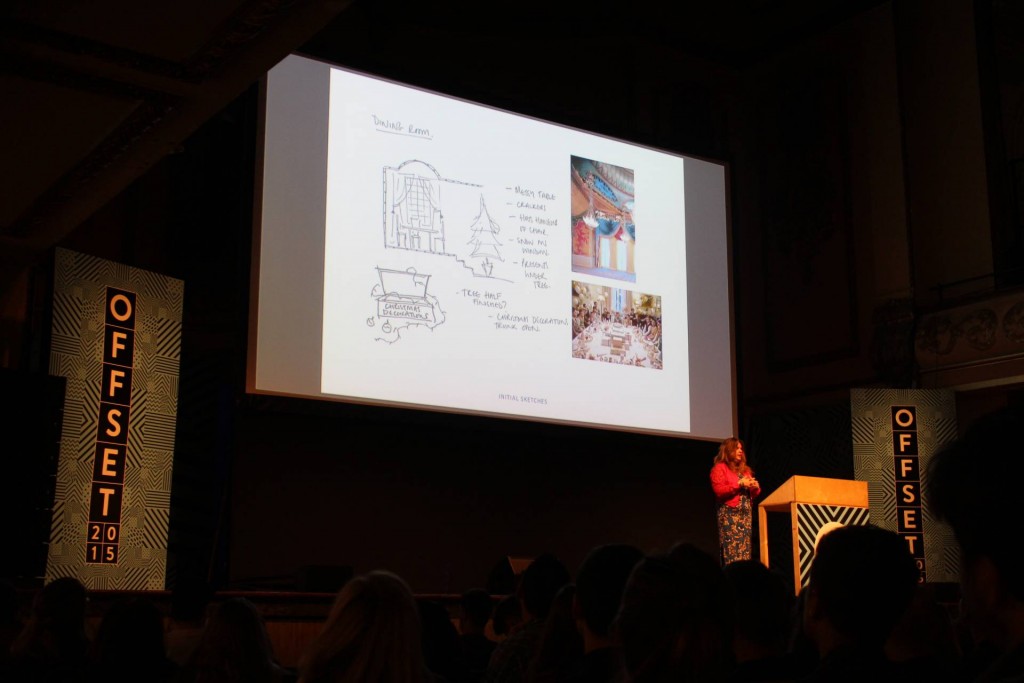 Liz Silvester, Liberty of London
‘The best way to work is to sketch it all out on paper.’ 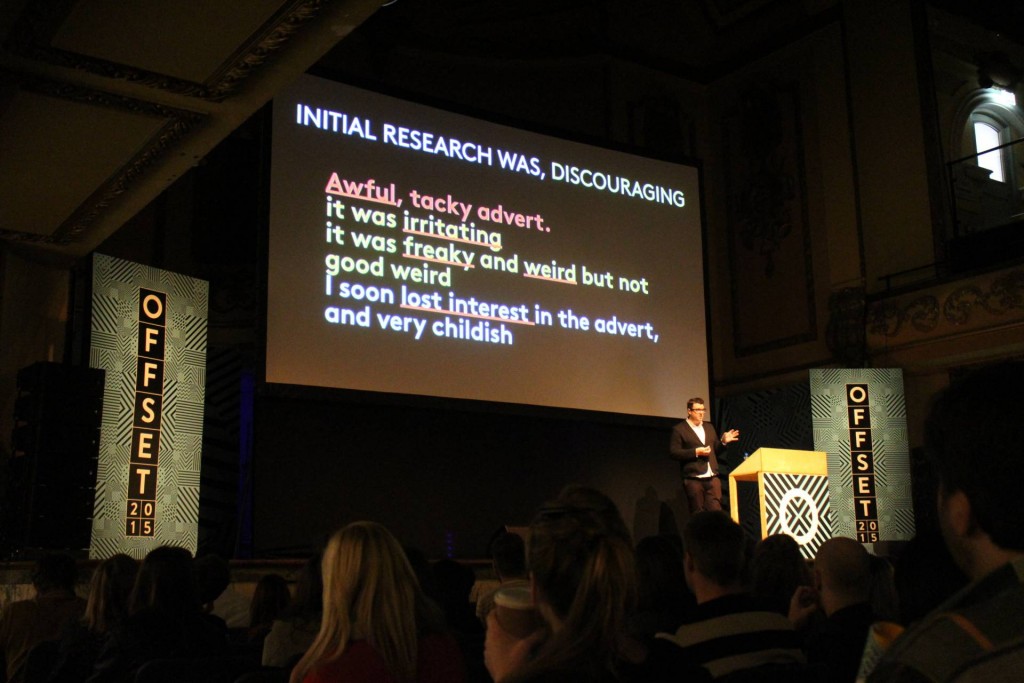 Chris Gallery, Mother
‘Really good work happens when you go that extra mile.’
‘You can always do more when you give a shit.’ 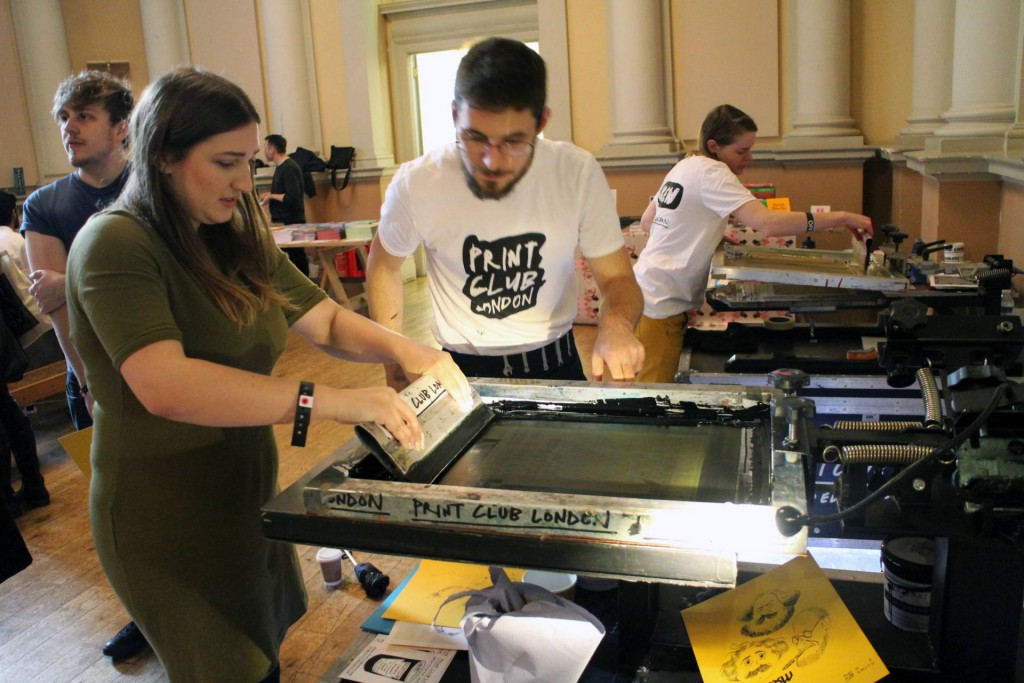 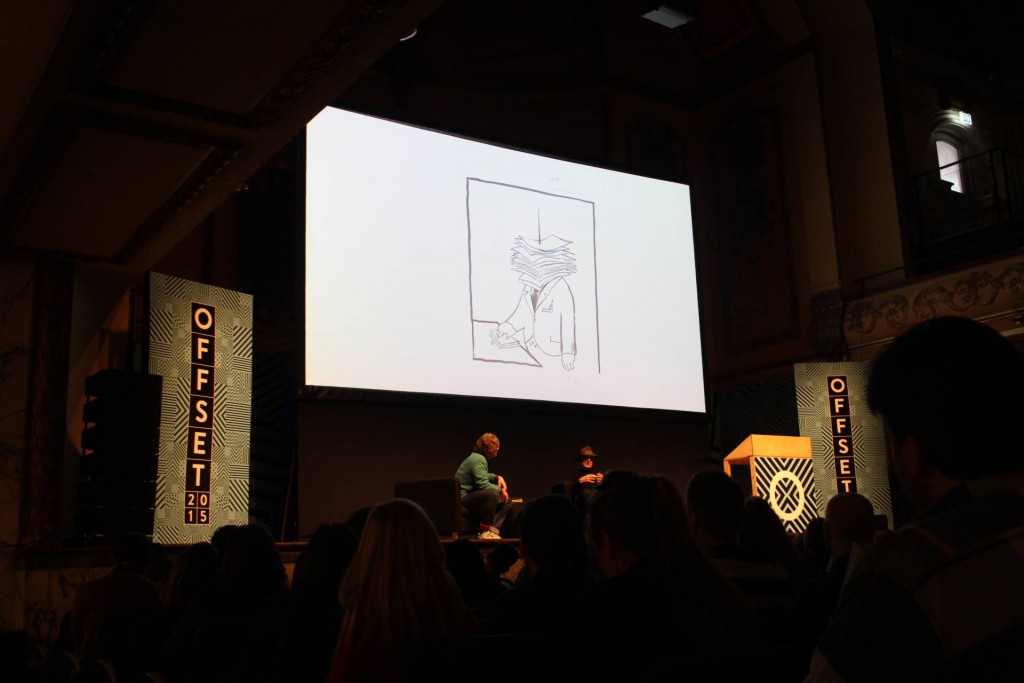 Tomi Ungerer
‘I educated myself, and I’m still educating myself.’
‘For me, the essential discipline is to collect knowledge.’
‘Curiosity is enthusiasm.’ 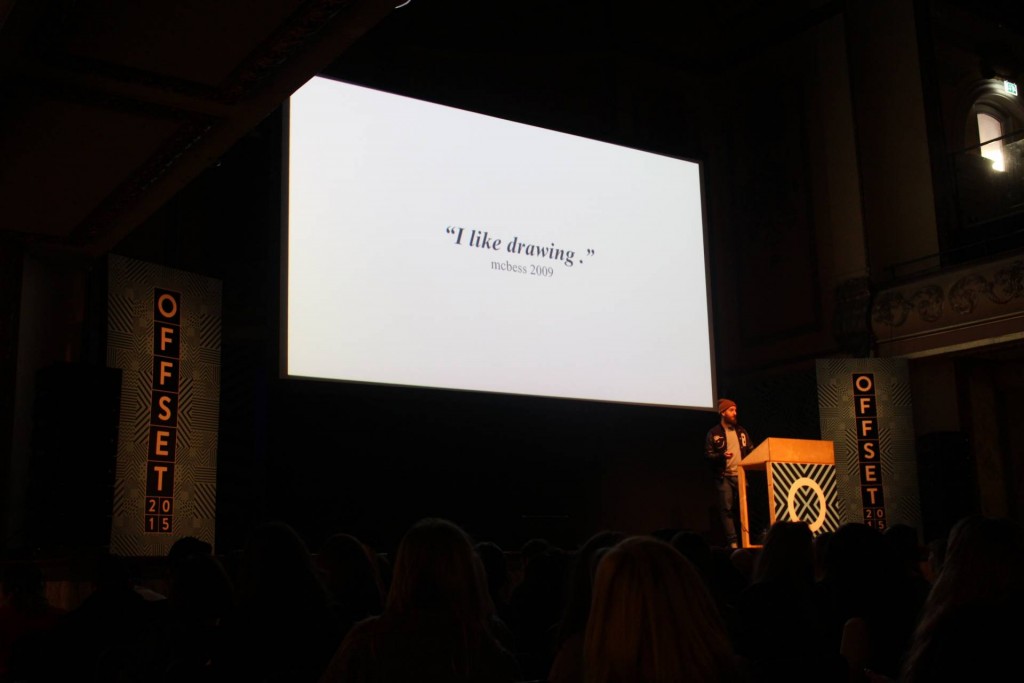 McBess
‘Rule #1 – if you want to be successful on the internet, get a cat!’

Vince Frost
‘I realised, I was taught to be a designer for 2 years, but not a human being.’
‘We go to other people to help us, but I needed to focus on my own wellbeing rather than looking to someone else to solve my problems.’
‘I get goosebumps when somebody has an idea.’
‘There’s nothing wrong with asking for help – I thought it was a weakness for a long time, but now I see that you don’t have to be good at everything.’
‘Say yes; it could open 100 doors in the future. Say no and you close the doors.’ 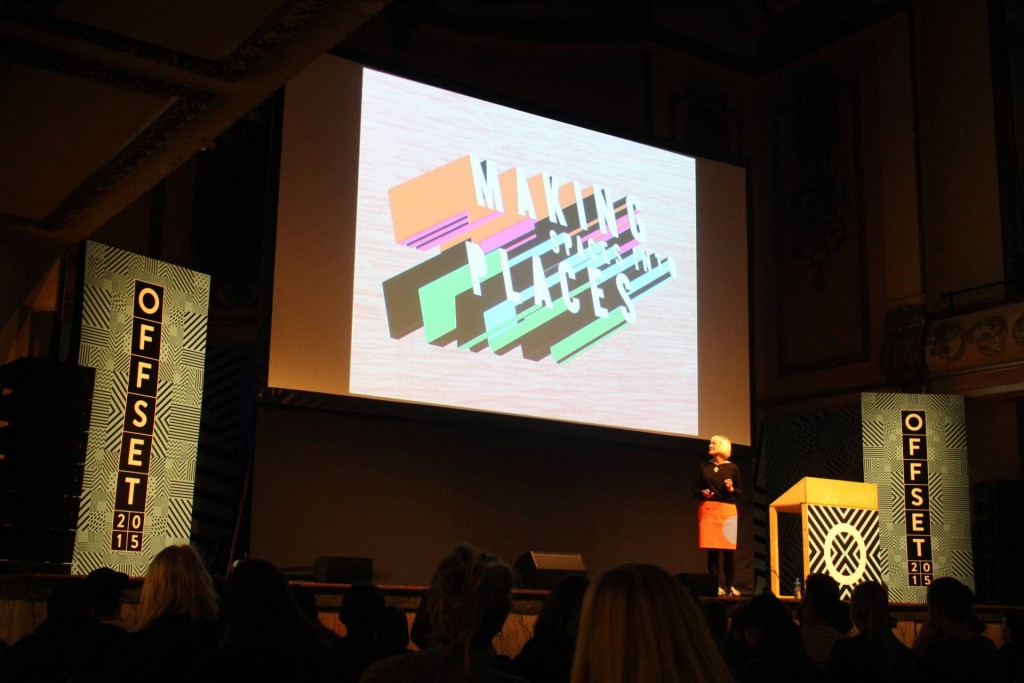 Morag Myerscough
‘After you’ve made a piece of work like that you think you can do anything.’
‘I don’t really even know where these things come from, I just do them.’
‘It’s about getting people to be a part of it.’

GOODIES.
What’s a design event without some nice design bits and bobs? In our goodie bags we received some magazines (including WaysAndMeans and The Drum), some Offset notebooks and I nabbed some popcorn to nibble on too. 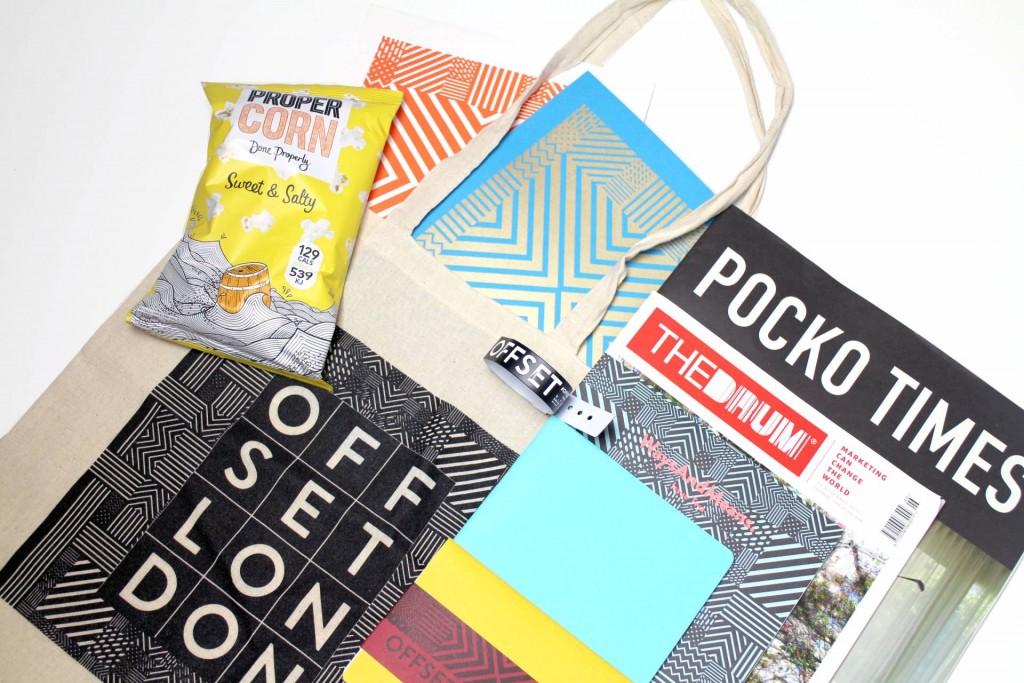 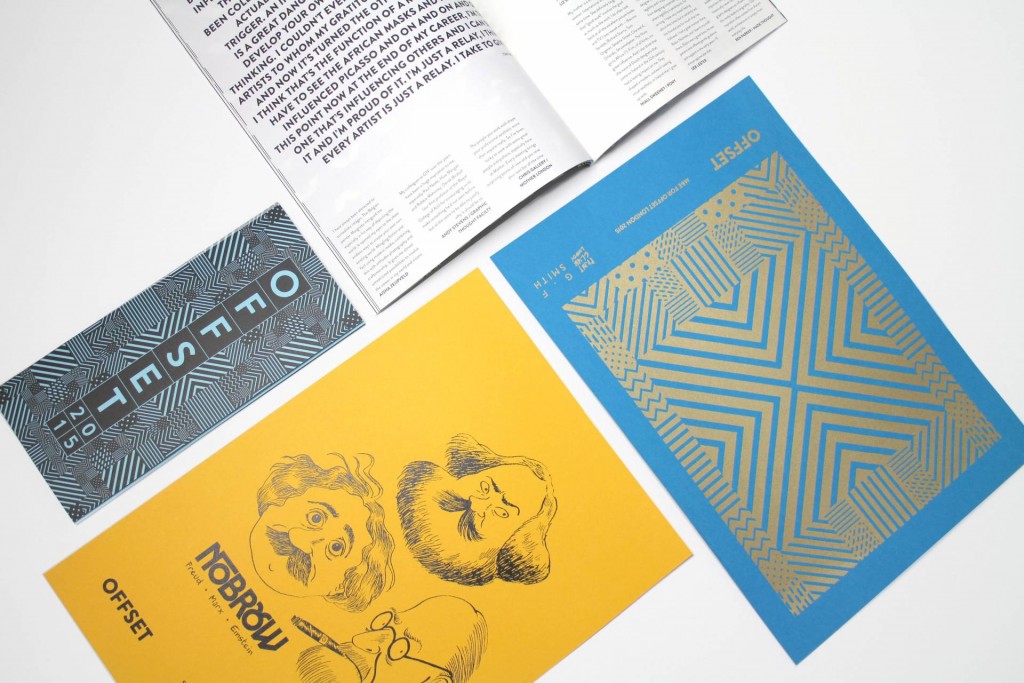 And here are the prints that I printed thanks to Print Club London – loving that gold ink!

So that was my Offset London experience. I had such a great time and it was just what I needed to inspire me and reassure me that I had made the right decision! I’m so glad that I got lucky and won the Computer Arts twitter competition – I saw it as a sign 🙂 Make sure you watch both vlogs & subscribe to my Youtube channel too, please and thanks!

Did you make it to Offset London? What did you think? Who was your favourite speaker? Also what do you think to me vlogging? Let me know in the comments 🙂