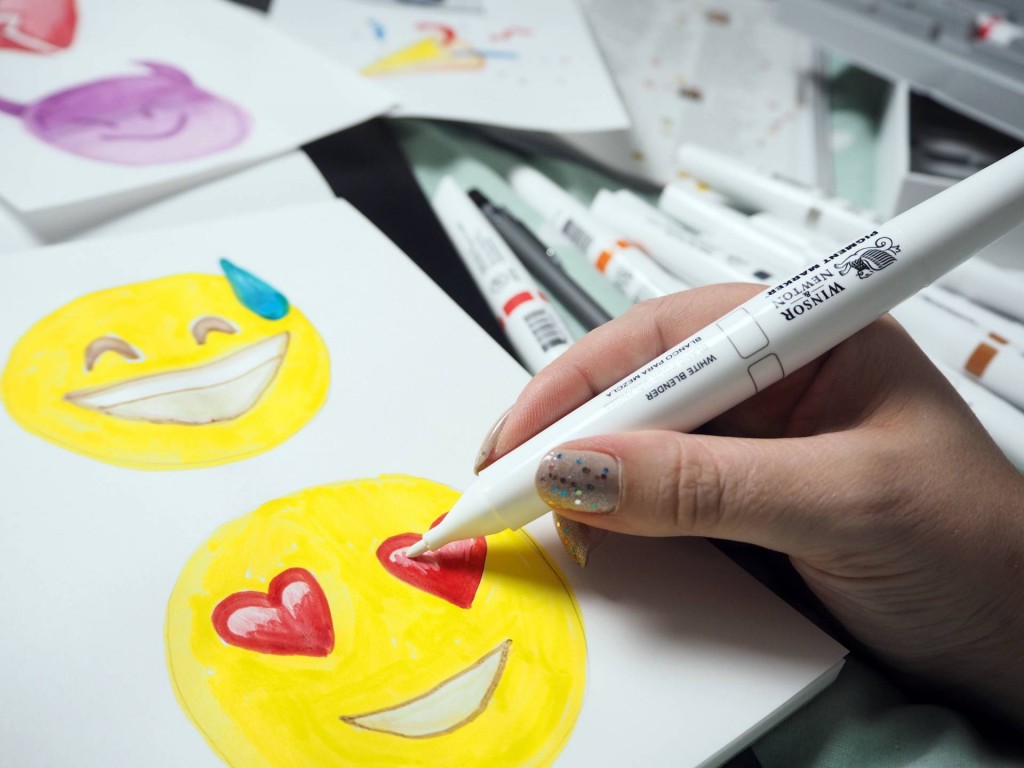 A few weeks ago Cass Art offered to send me a mystery new product – how could I say no? I’ll admit, I’m a bit behind on posting these but if you’ve been reading recent posts I’m sure you know that I’ve been a bit busy! (If not, where have you been!?) So, what arrived on my doorstep? 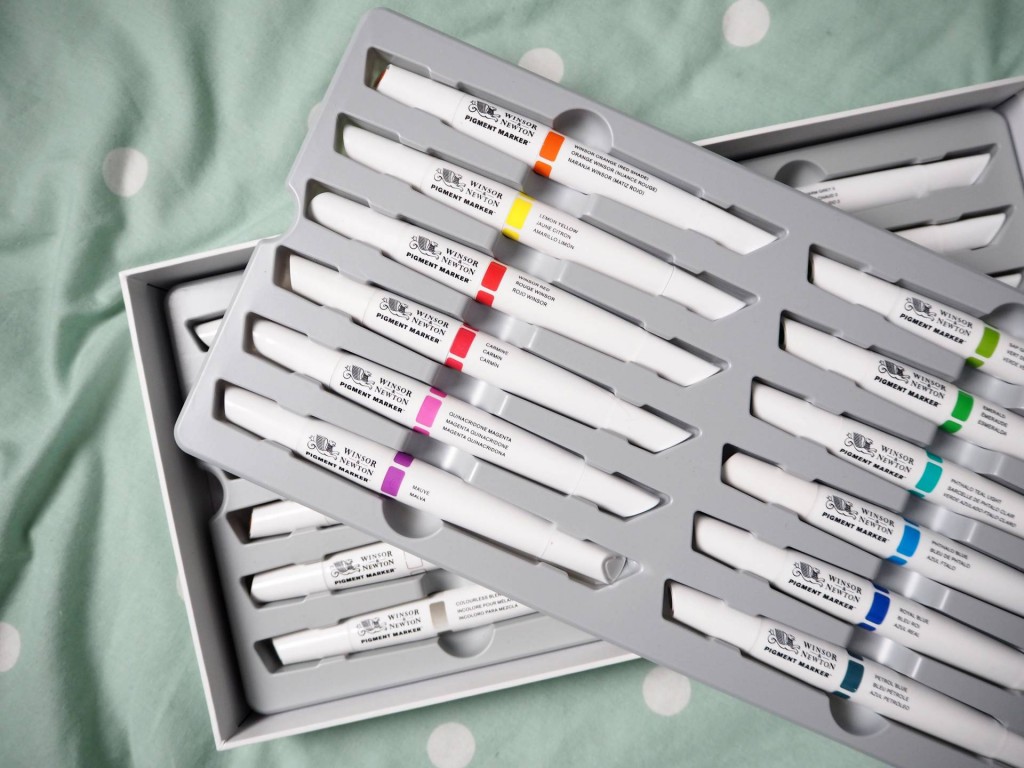 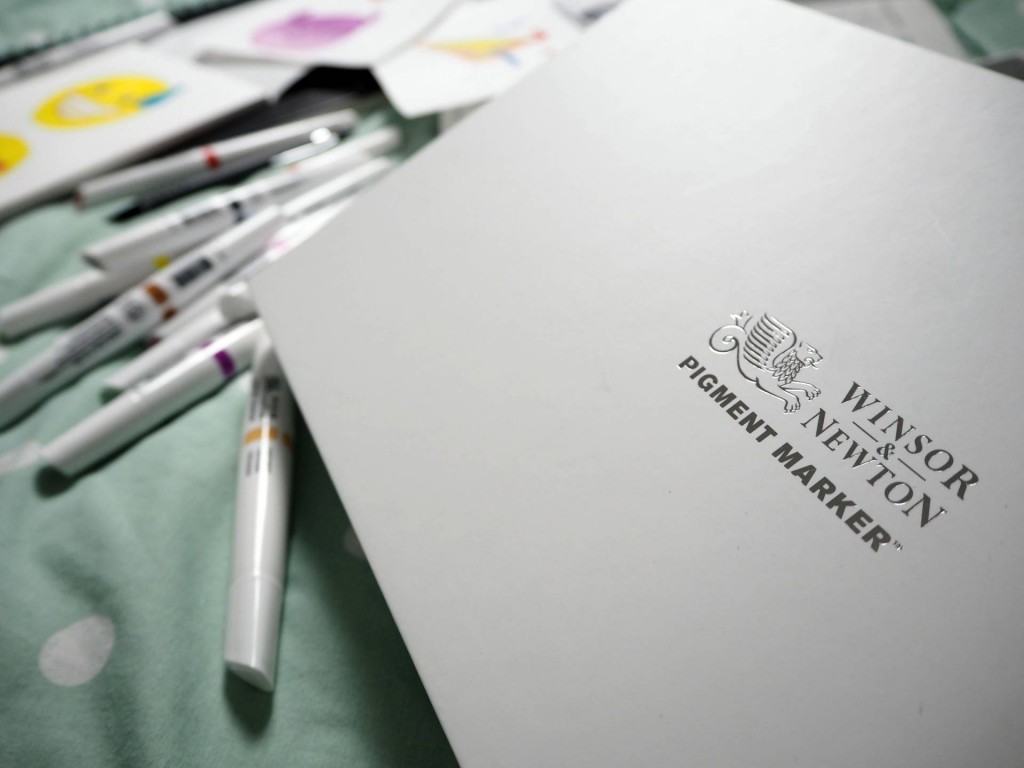 At the beginning of November Winsor & Newton released an amazing new product: Pigment Markers. It’s like painting, but with a pen. I love trying new things/a challenge, and painting with pens has been exactly that.

As a Graphic Designer used to markers and someone thats always been baffled by watercolour, I was a bit scared at first. It felt quite weird to be holding a pen but painting like with a paintbrush – it took me a while to get my head around it (and I’m still not sure I’ve mastered it… but practice makes perfect, hey!)

With the new issue of Porter magazine popping through my letter box and the recent reveal of ‘the word’ of 2015, I was inspired to test out the markers with some emojis: 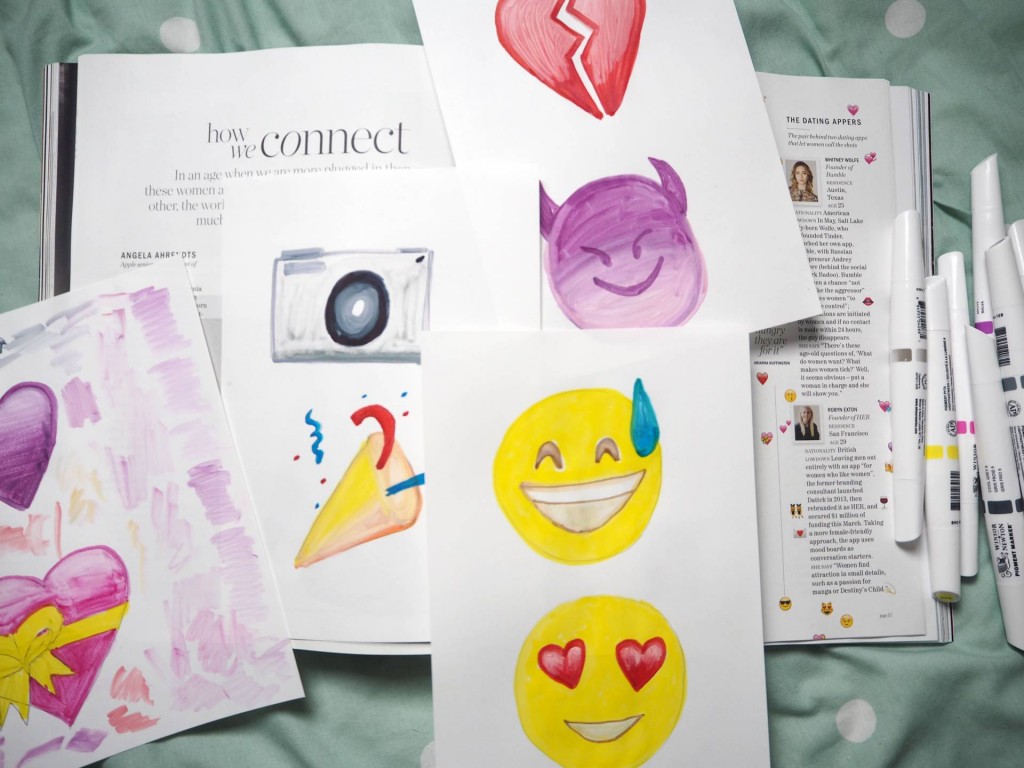 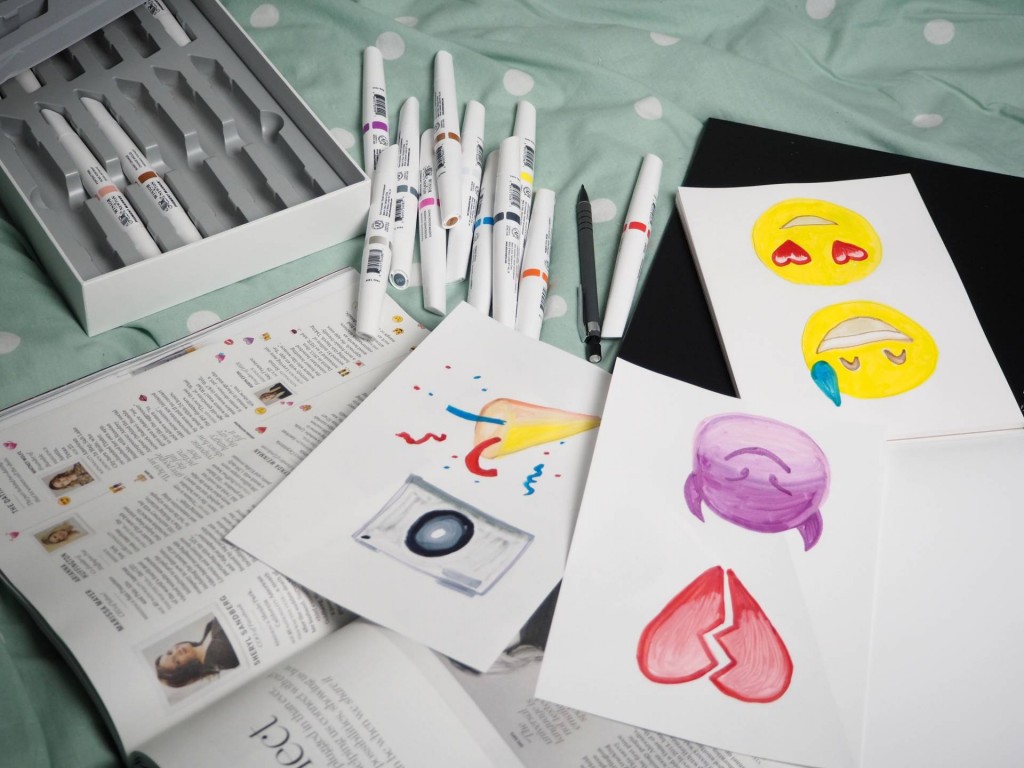 ‘Ok, so they’re fancy pens?’ you say… yes, but there’s more! Because the markers work like paint, alongside the rainbow of colours there are also 2 special pens: a white blender and a colourless blender. These are what really make these markers come to life as paint does: 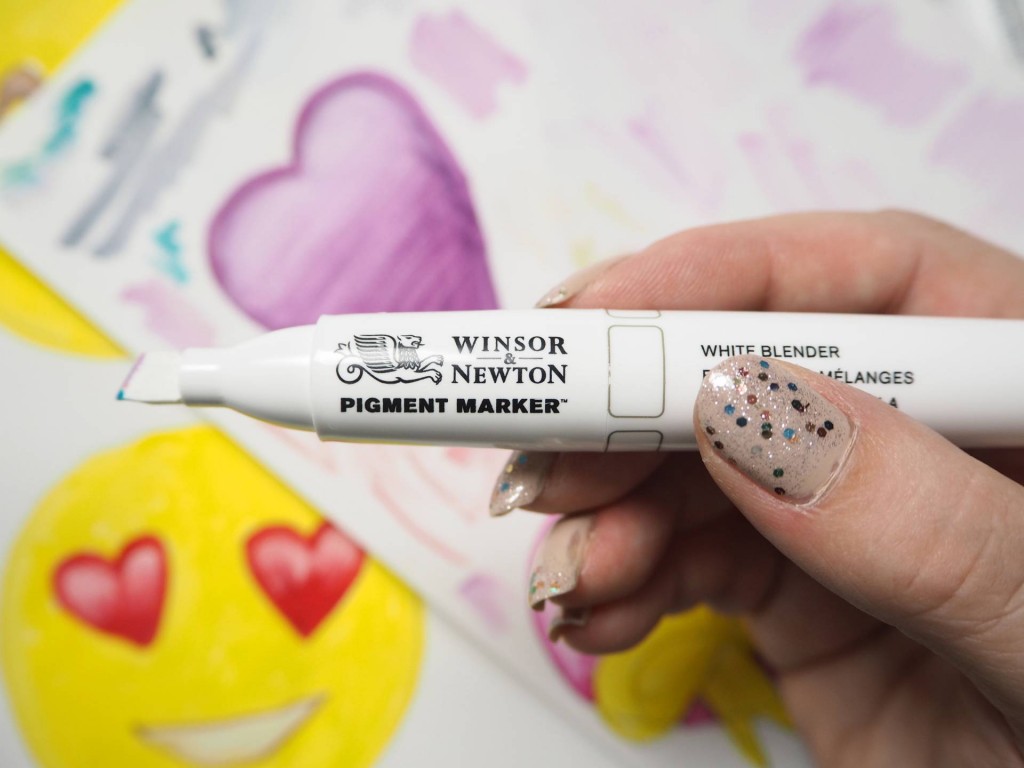 Like with watercolour, the blenders allow you to achieve a massive range of tones and shades, so you don’t just have 1 colour; you have HUNDREDS in one box! Another amazing feature of the pigment markers is that they dry within a few seconds like pens, but like paint, you can go back and make changes with the blenders for a few days after. WOW! Am I right?

I was lucky to learn all about the markers first hand from Camille, a lovely Winsor and Newton rep at a LGC event (watch the pens in action in this video). 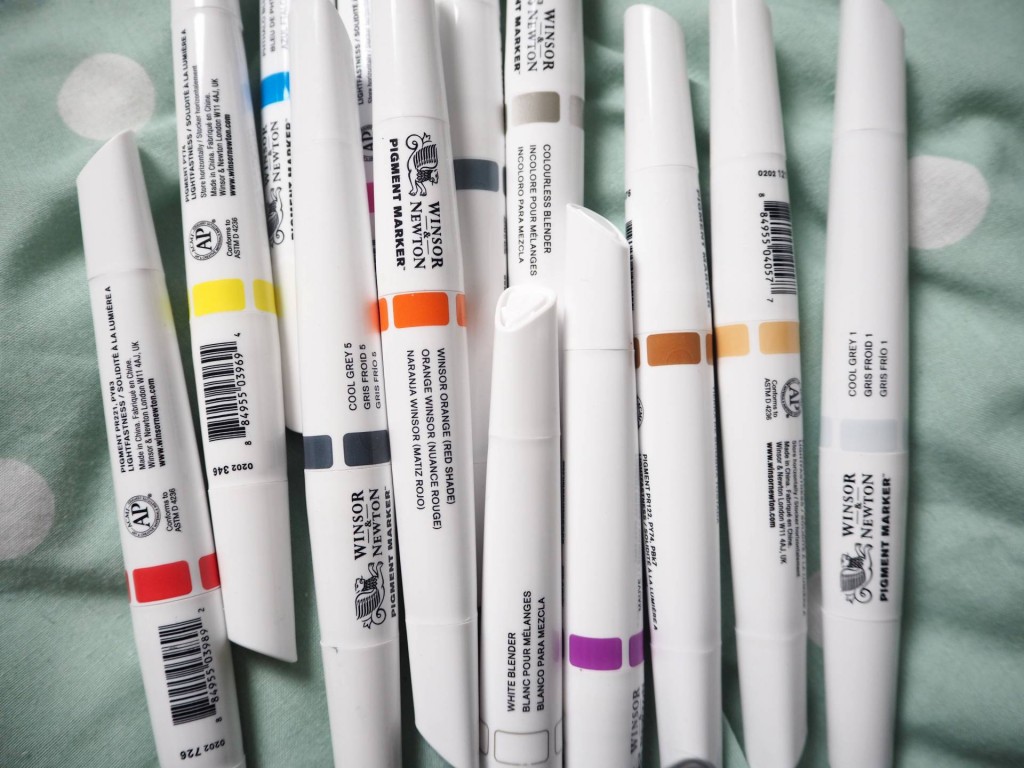 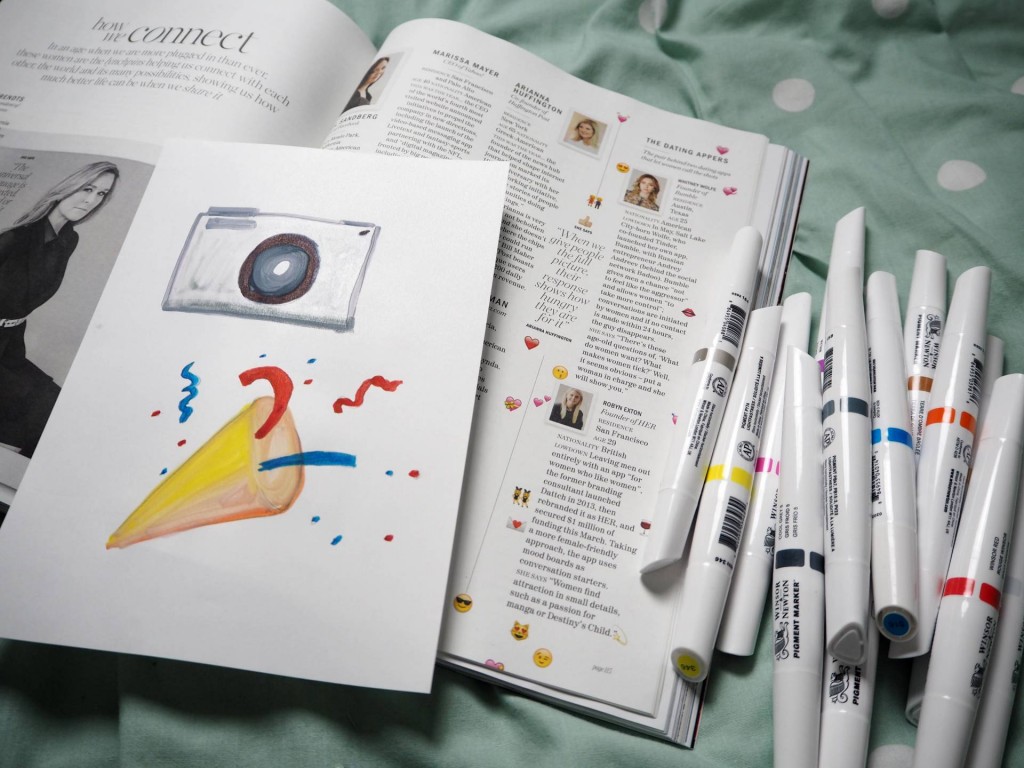 These are quite quick sketches, but I actually enjoyed drawing the emojis and am thinking of maybe doing some neater versions. Also the process of these will be in my Vlogmas Day 4 video over on Youtube, so look out for that if you’re interested in seeing some behind the scenes footage! (P.S. If you’re not subscribed to me on Youtube, I’m attempting Vlogmas – vlogging everyday until Christmas!)

So, are you as impressed with these markers as I am? I’m going to be playing with these more over the festive season to improve. If you’ve been good this year hopefully Santa will be bringing some to you on the 25th! Thanks to Cass Art for the surprise 🙂

[ I was sent the set of markers by Cass Art but as always all enthusiasm and bad emoji drawings are 100% my own!]