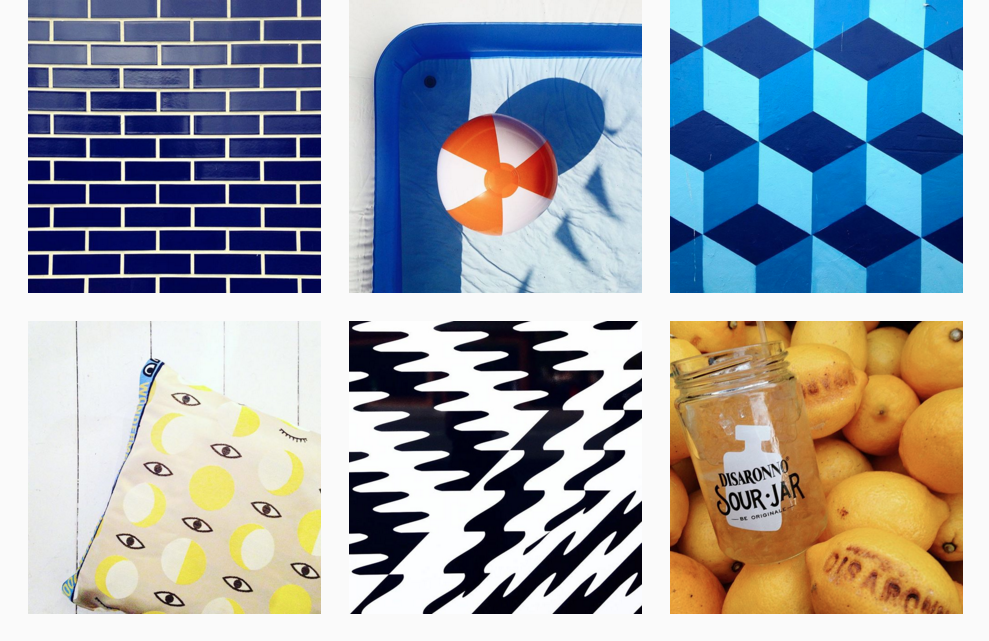 Some days I would think to myself; ‘This is hard, so why am I doing this?’ and this smug feeling is definitely the answer. 100 posts and 12,030 likes later (yes I just went through all 100 photos and added them all up) the project is finished! It’s a mix of emotions; pride, relief and sadness. Sure, I’m really proud of finishing again but let me tell you it wasn’t easy! Luckily I wasn’t alone this year, and because the community was a really important part of the project I wanted to congratulate…

The projects that are slightly behind schedule, but still awesome & I can’t wait to see the end result:

And my ‘soooo close’ award goes to:

I really hope that we are able to arrange some sort of London community meet up (like last year) and I’m totally up for taking charge of that, so let me know if you’d like to attend!

My favourite thing about doing the project this year was being surrounded by other people that I knew doing it too. It really egged me on to keep going when I started to struggle and it was so lovely to be able to talk to others who really understood. At some points I felt like I took a bit of a motherly role, reassuring and encouraging the newbies. I felt a bit responsible if I’m honest, as I had encouraged a lot of people to try the challenge, and honestly didn’t expect everyone to make it. 100 days is a massive commitment and what I’d like to say to everyone that started but didn’t quite finish is YOU ARE AWESOME. You shouldn’t feel like a failure. Even deciding to commit to a project is honourable and the content you did create is awesome – I saw all of it 🙂 Life is too short, and I think you’d be silly to continue doing something that you don’t enjoy. Also sometimes life gets in the way, and makes a silly project seem so insignificant. You made the right choice for you, and I admire you for it 🙂 A lot of you were still heavily involved in the project anyway, cheering on and supporting the rest of the community – and that is what it’s all about really.

So onto the end of my project. I don’t like to blow my own trumpet usually, but can I just say that I’m so so happy with how the last 21 days of the project went. These are exactly the kinds of images that I want to be posting all of the time, but sometimes you just can’t make everything Instagammable! So now I’ve bigged it up, have a look for yourself: 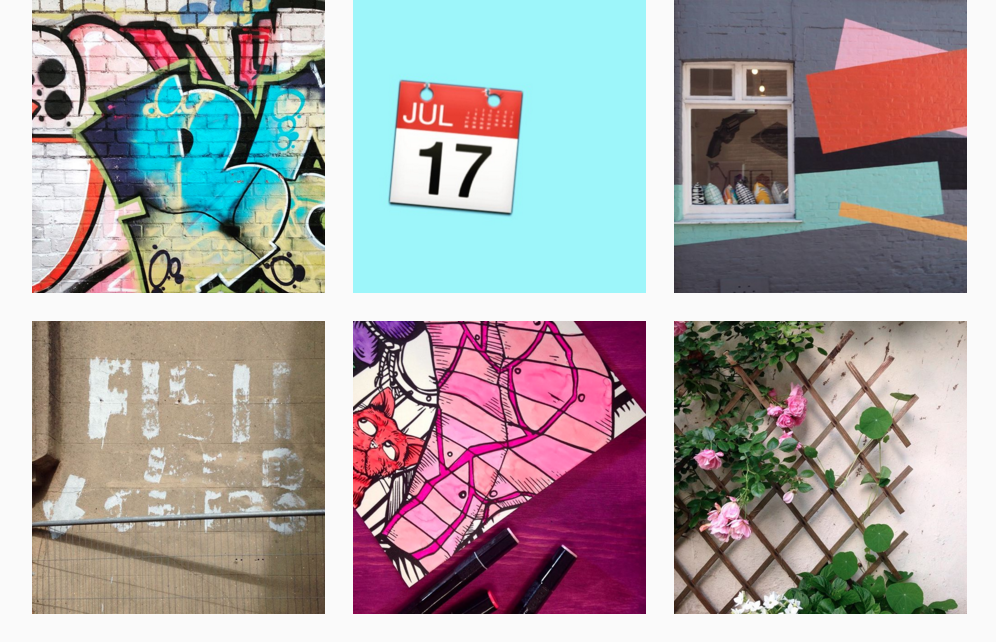 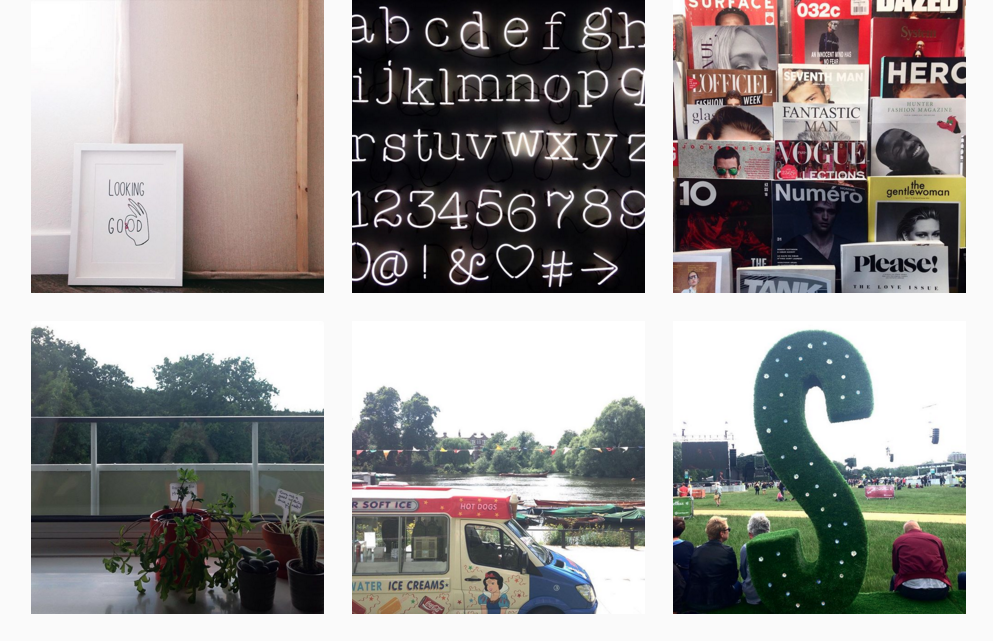 I really enjoyed the last 21 days (I really don’t like 74 – 76, but I’m glad I tried something a bit different). You might remember that I was a bit hesitant at the idea of another #The100ayProject attempt. I was really worried that whatever I did this year would be over shadowed by #100DaysofTriangles but actually I’m so much happier with #100DaysofGraphique. I’ve got no guilt in saying WOW, my photography skills in terms of composition, lighting and eye for detail have really come a long way. GO ME!

I’d been posting really late in the day because 8 – 10pm seemed to get the best response (because I think the majority of #The100DayProject users are in the US) so I had all day to think about what I was going to finish on. I felt fine about it. The lovely Laura (#100DaysOfPublicTransport) tweeted me at 4.30pm…

… and then I started to panic. I genuinely didn’t have any idea what I was going to post, and I only had 4 hours to find it. I scrolled through my phone, looking for inspiration – maybe I’d taken a quick photo of something to remind me to revisit at a later date? Then I stumbled across it – the image that the organised me had saved to help the stressed out me when I needed it:

💯/💯 🎉 ET FINI 🎉 OH, what a challenge that was! Thank you so much for your support – I can’t explain how much I appreciate it! 😘 To those people that liked my posts every single day: I noticed you 😉 💙💜💚💗💛 The final #100daysofgraphique post was always going to be hard, but the beautiful pastel tiles from THAT Insta-famous house are good enough in my books 📓😍👌🏼 THANK YOU FOR 100 DAYS OF LOVE & GRAPHIC APPRECIATION 💗 And don’t forget to let me know which day was your favourite…

And as you can see… it did amazingly! I couldn’t believe the response – in 45 minutes it had already hit 100 likes, which you can see is my average total if you look at the rest of my feed. WHY and HOW? Well, I did a bit of digging and I think that it was a mix of the beautiful image (that house is Insta-famous, but hidden away in the depths of East London), the suspense of it being the 100th post, the speed of the reaction to it, the support from all of my followers AND the hashtags. I know there’s been a lot of grumbling about Instagram’s algorithm changes, but maybe it worked in my favour this time!

…But it also featured in the MAIN hashtag for the project, for almost 48 hours! And sat next to the project founder’s post too for a while, I might add 😉 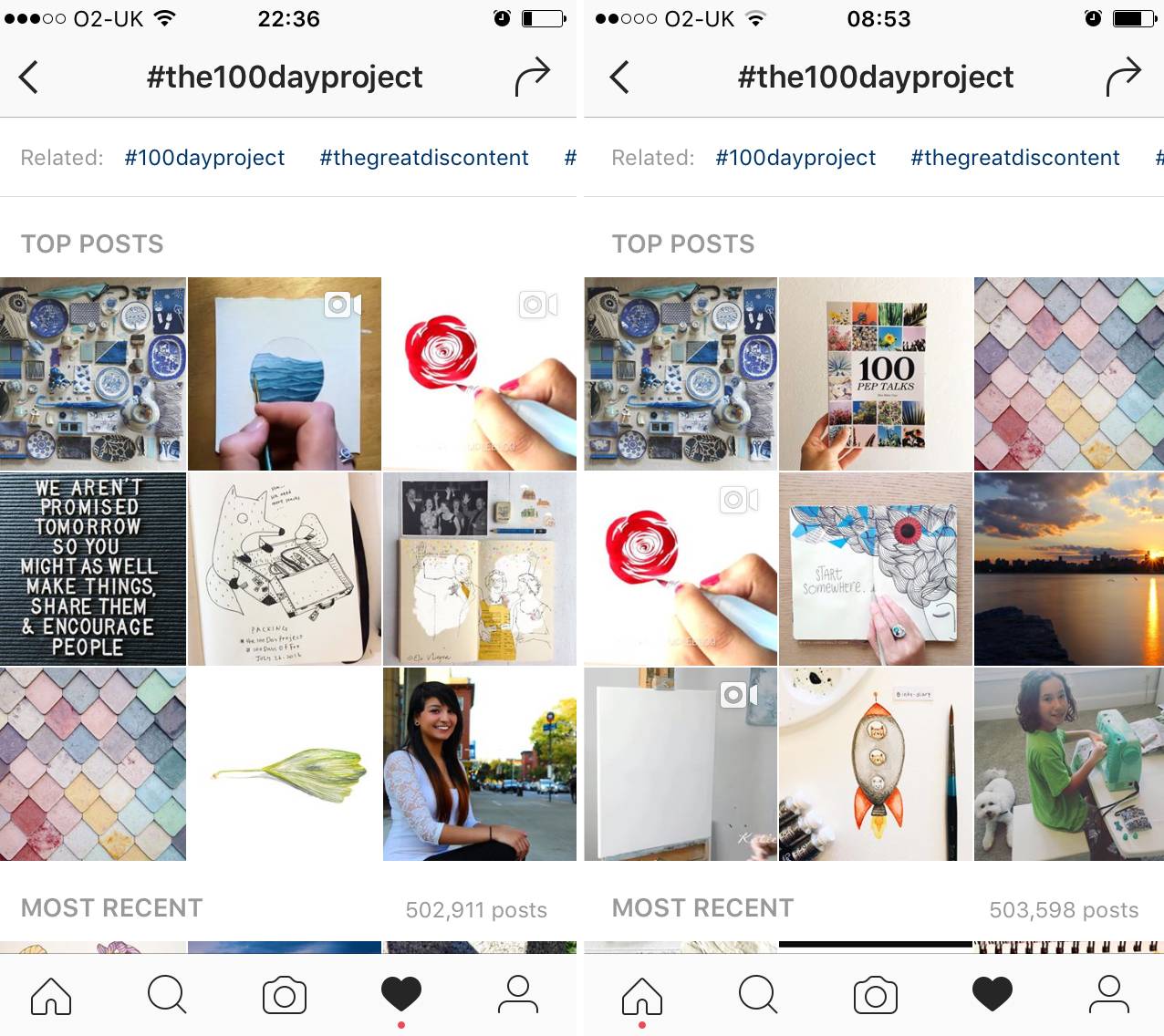 I was super excited when I saw that it was creeping up to 300, as 320 was the most likes that any of my Instagram posts has received (an image from last year’s 100 Day Project actually), but then it just kept going… and it’s still receiving likes this morning! Whilst I’m writing this post it’s at 686, which is just mental. It might not reach 700, but blimey that’s pretty mental and I don’t think I’ll ever beat that again!

And that is my #The100DayProject story for 2016. Thank you to everyone that supported me, liked the posts and put up with me taking a million photos when we met up. I honestly can’t explain how much I appreciate it, especially as my life is very different right now compared to when I began the challenge. The challenge really helped me to keep going and be creative even when I thought I had no more creativity left to give. Sob.

So what’s the plan now, you ask? Well I’m going to try to continue to keep the standard high and graphic 🙂 Who’s with me – FOLLOW ME! And as for doing #The100DayProject in 2017… I’ll have to think about that ha

Behind the scenes: How I edit my Instagram Pics