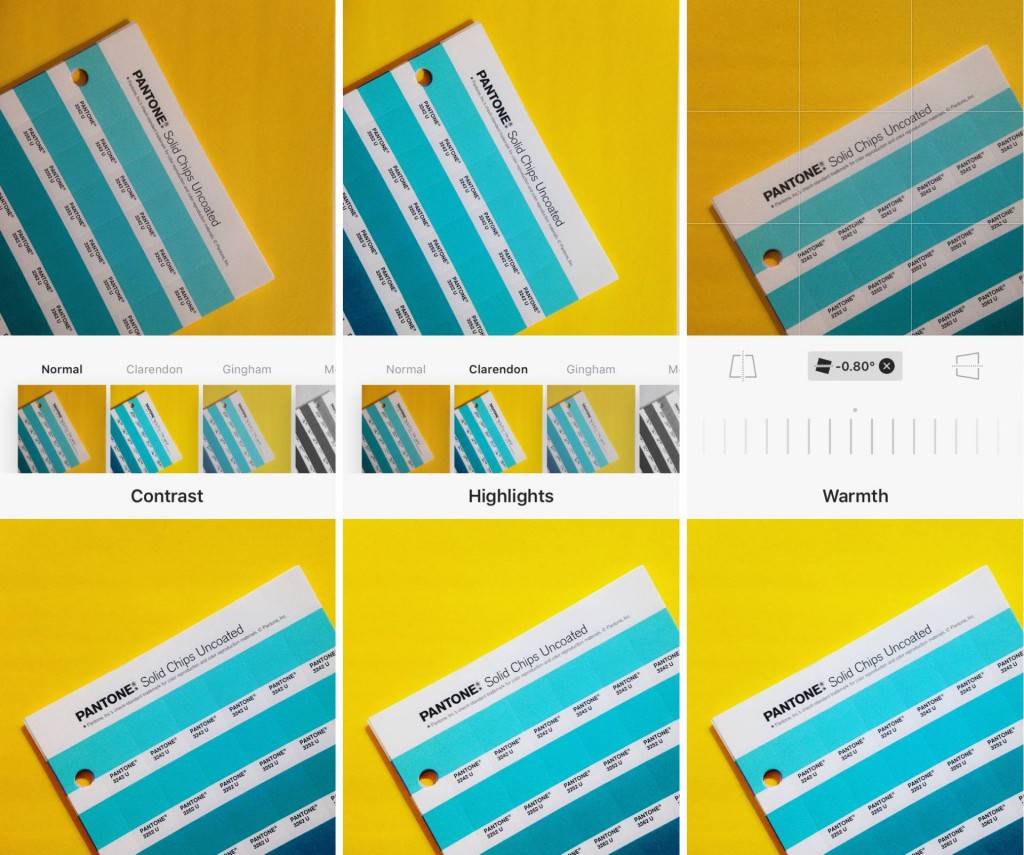 I’ve had this post saved in my drafts for ages (you can tell because look, it’s the old-style vsco screenshots!) but found myself too caught up in #The100DayProject to finish it. Now that I’ve posted all 100 days and #100DaysofGraphique is done and dusted, I thought it was time to get this one ticked off my never-ending to-do list. One step at a time, hey?

You might have seen this kind of post from other bloggers, but I wanted to do my own take as a creative and because my feed is different to a lot of other blogger’s feeds. If I had to sum up my Instagram feed I’d say it’s graphic, with bold colours and dynamic angles. I like contrast, straight lines and patterns. I like angular composition with a bit of breathing space, and I really like it when things all line up, like when something lines up diagonally with the corner of the frame. Oh, I do like that!

I didn’t realise that I had a ‘style’ as such, but somebody on twitter said that when they’re scrolling through their social feeds, they can always recognise an image as mine. So I guess I do, and I’m cool with that 🙂 I don’t post the blogger cliche flatlay too often, but when I do I’m quite particular about how it looks so I thought I’d share a bit about my editing process… 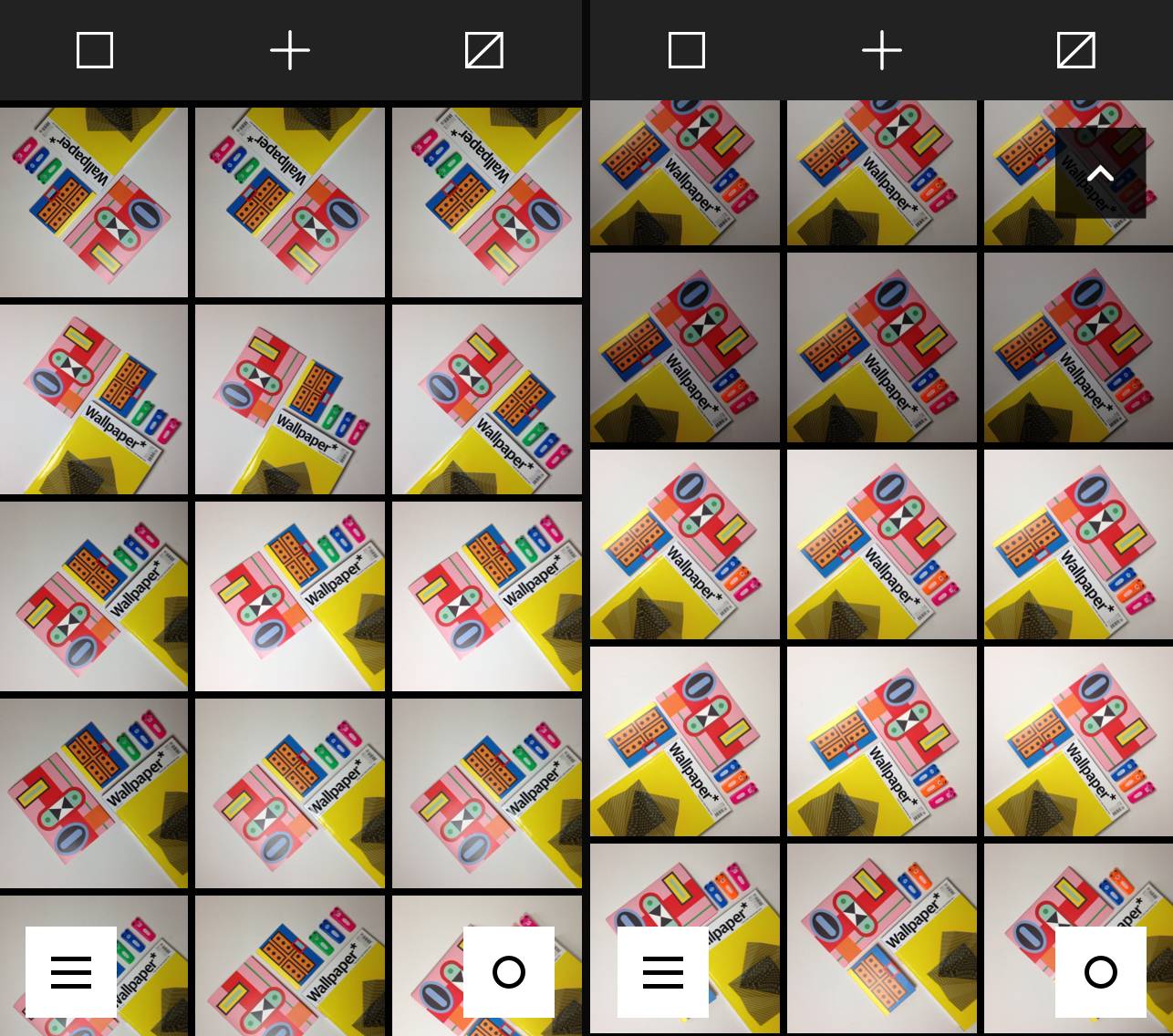 Like all of the other bloggers, the process definitely begins with taking about 200 photos of the same thing. But it’s not the same thing – the angles are slightly different, I might nudge something to the left a bit or change up the composition. It might not seem like a big deal, but when you’re looking for good angles and clean lines, detail is everything!

To take most of my Instagram photos I use vsco, which is a free photo editing app. The reason I prefer to use vsco to the normal iPhone camera is because it has an option where you can tap the screen, split a circle into two and control the focus and exposure separately. This is handy when you’re working with shadows or low light because you can more the exposure around the screen to get your preferred lighting – see the difference below: 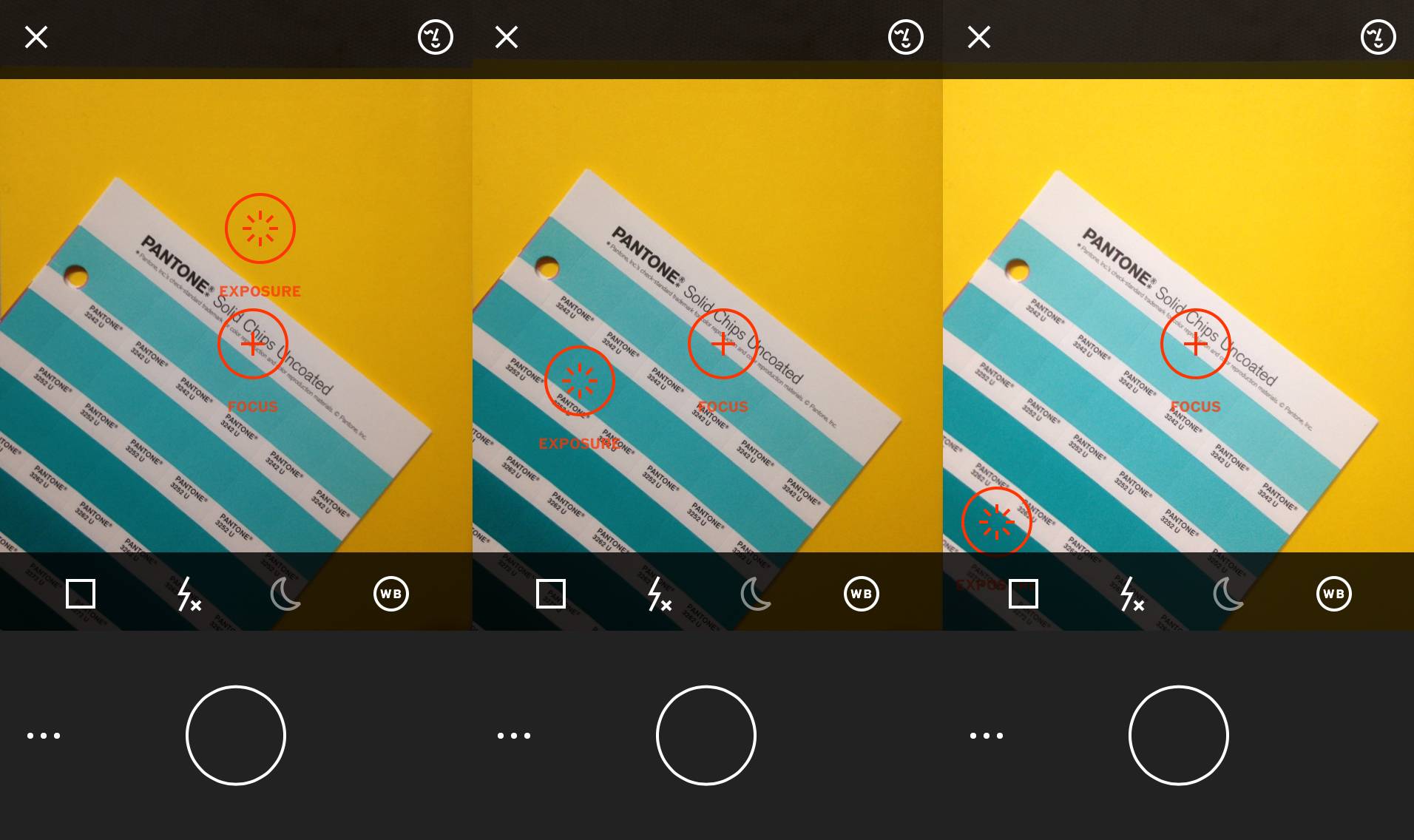 So from my 200 photos (ok I probably only took 40 photos) I go through and whittle it down to a couple. I saved these 3 to take into Instagram and play around with an edit. Even though they are essentially all the same image, they do have slightly different angles and lighting – look at the strength of that shine on the wallpaper magazine on the image on the right compared to the other two!

Because I’m a perfectionist when it comes to white background flatlays, I actually take the image into Photoshop. I have spent so many hours trying to edit images in Instagram and have never quite been able to achieve what I wanted, and as a Graphic Designer I know my way around Photoshop so it just makes sense for my sanity ha

Ok so in Photoshop I duplicate the layer; the top layer is going to be the background colour and the bottom layer, the objects. So with the top layer, I create a mask (which is the red overlay below). 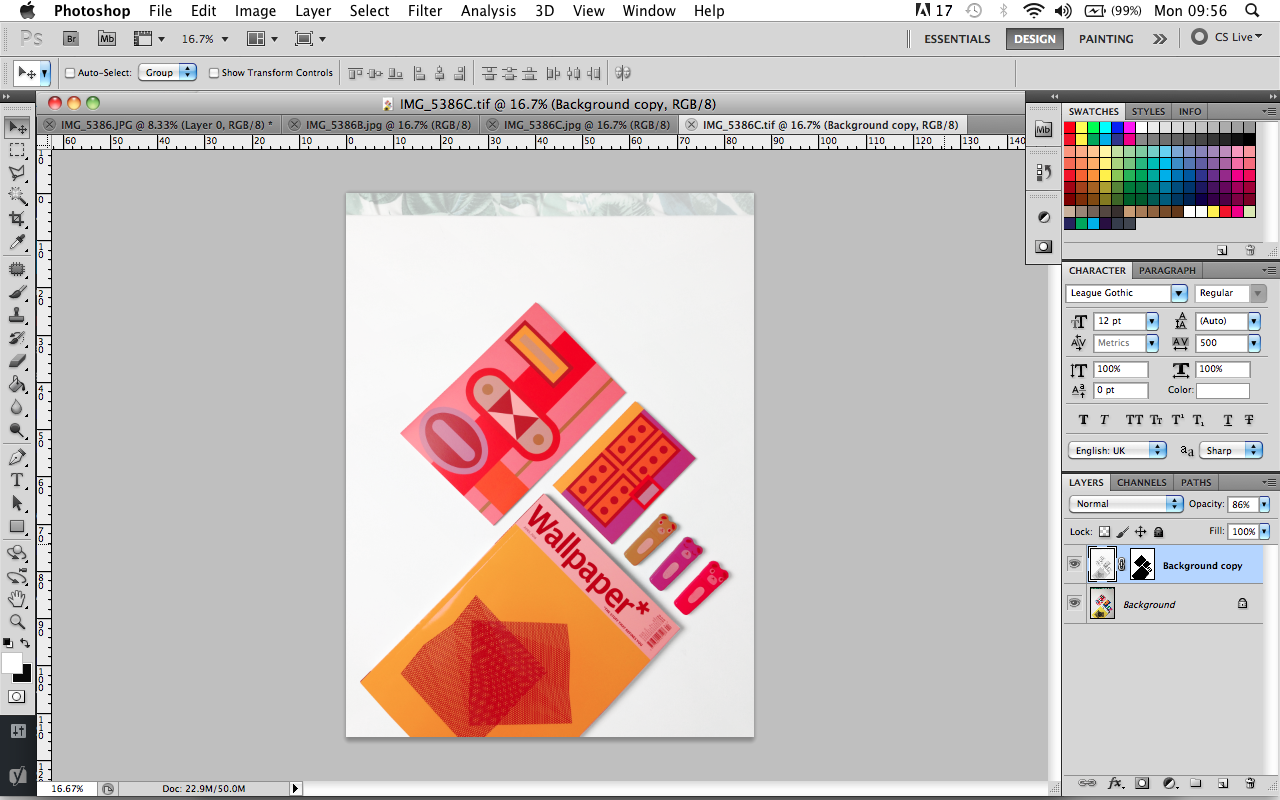 This basically hides any section I don’t want to edit, so you can see the objects from the layer beneath. With the objects masked out, I’m just playing with the background now so I desaturate the layer to get rid of any yellow tones and bump up the contrast and brightness. Sometimes I clone any dodgy grey areas out, so the background is as pristine and beautiful as it can be, but I do like there to be a bit of texture to the white and for the objects to have a bit of shadow.

When I’m happy with that, I then look at the bottom layer which contains the objects. I don’t do a lot to this usually, just making it a bit brighter so the colours are more vibrant. You can see below (middle and right image) that the colour edit is very subtle, but does add to the overall effect of the image. 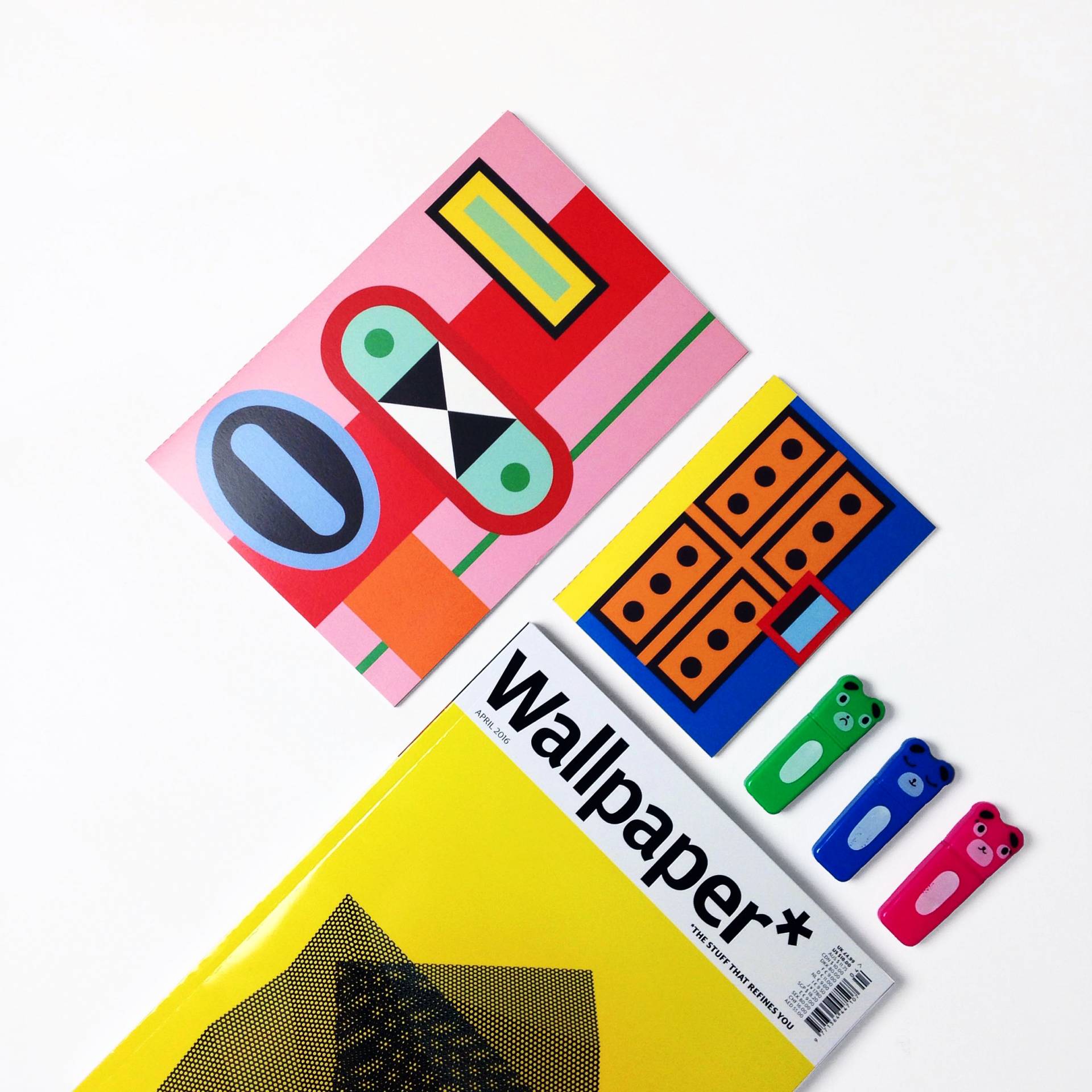 Et voila; the final image! Bright, white and bold. I’ll then take it into Instagram and check that the white is close to the white of the Instagram app (pretty particular, I know), write a witty caption (because I’m SO FUNNY 😉 ha) and then keep my fingers crossed that you guys will like it.

You can see below how it fits into the rest of my feed, and how when 2 flatlay images are edited consistently it looks best: 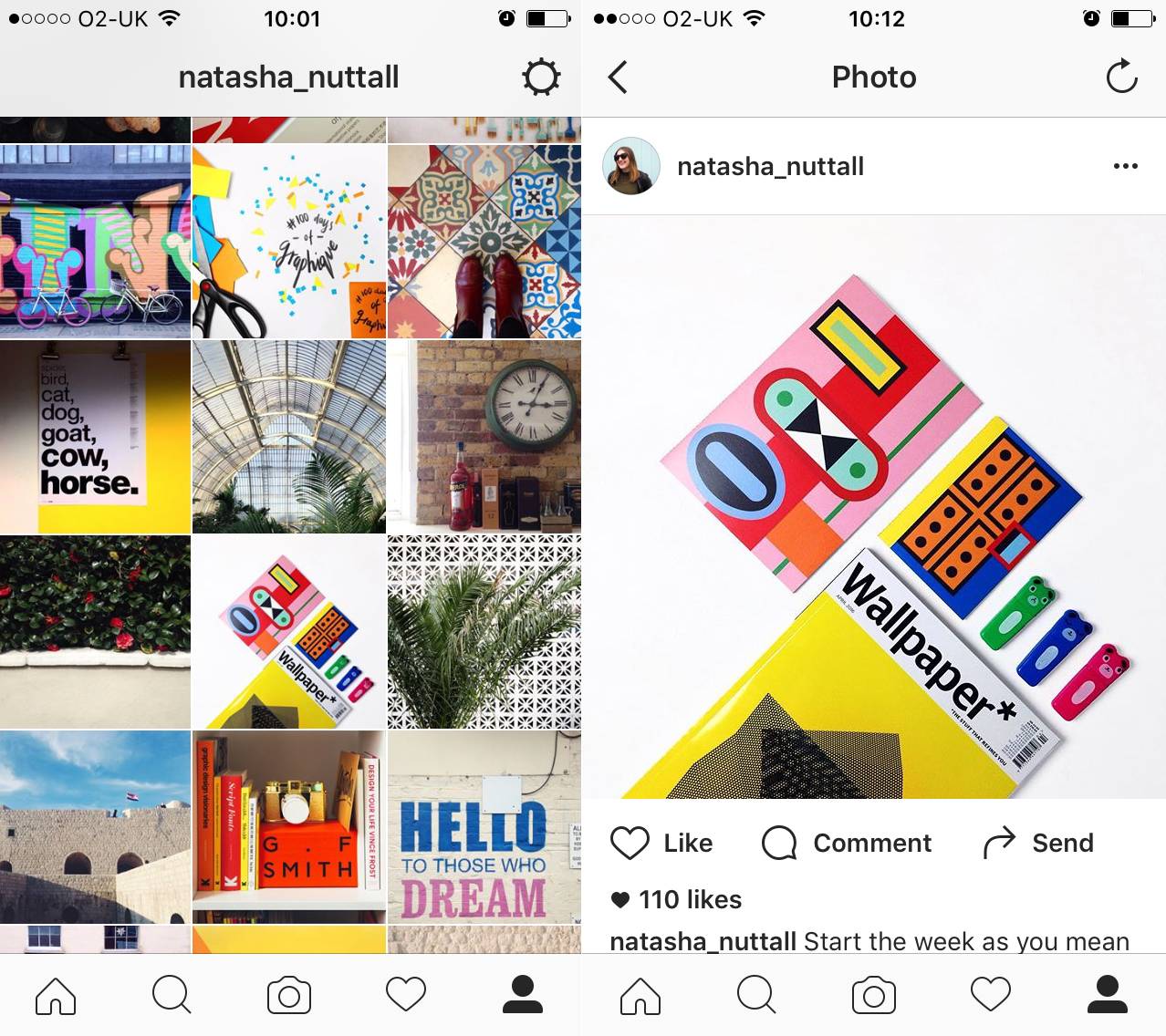 That is a pretty complex editing process, I know, so I thought I’d also share how I might edit one of my more ‘normal’ Instagram posts. In the final days of #The100DayProject I was struggling for inspiration, stuck inside my flat and running out of time so I decided to just use what I had around me on my desk. I’d bought some Pantone chips the day before, and paired it with a giant Post-it note pad that I found when I visited my parent’s house for a clear out of my college and University work (watch the vlog here).

The contrast of colours was lovely, but I knew I was going to need to work on the editing because the lighting in my flat is really bad. I decided to go for an angular slant, showing just the corner of the Pantone chips with some negative space for the yellow to shine through. This is something I’m often looking to achieve with photos on my feed (see below right) and after about 20 photos, all with slightly different angles, I thought I’d got the shot. (P.S. I made the boyf stand on a chair to take the photo below, bless him) 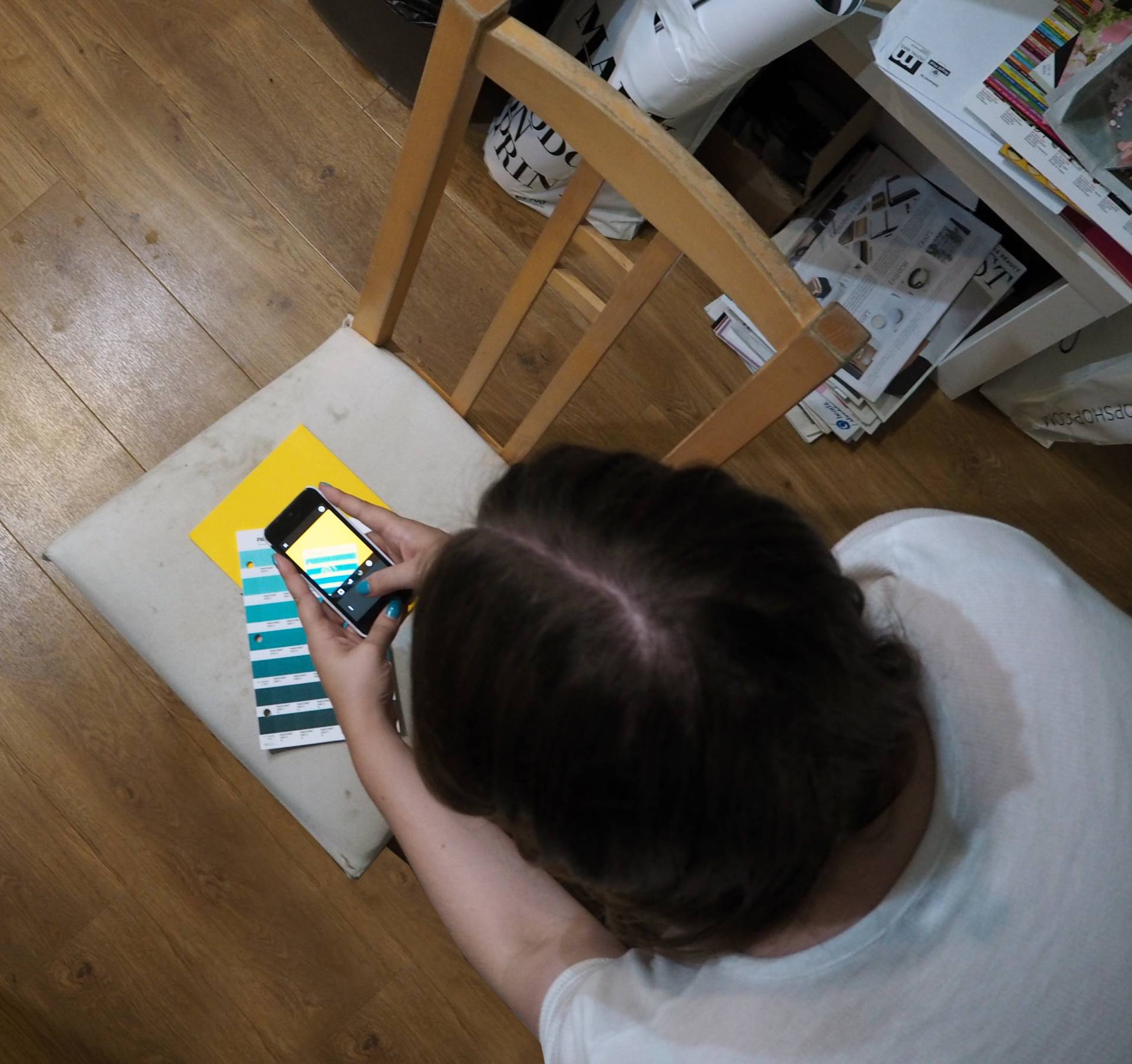 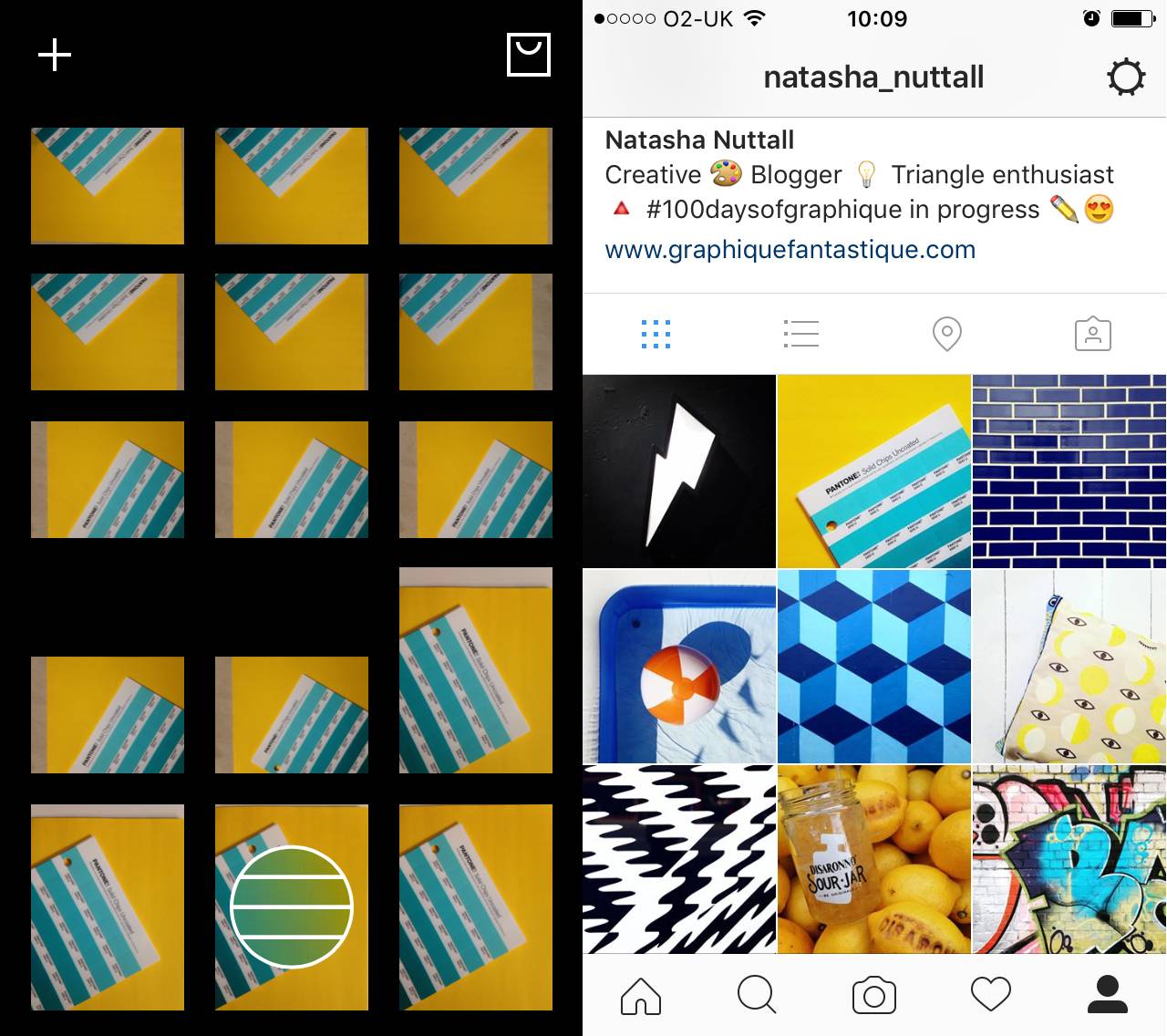 Again, I narrowed it down to 3 images and saved them so that I could play around with editing them in Instagram. I chose the image on the right in the end because I liked the angle and the shadow on the top left – it helped it look 3D rather than flat. 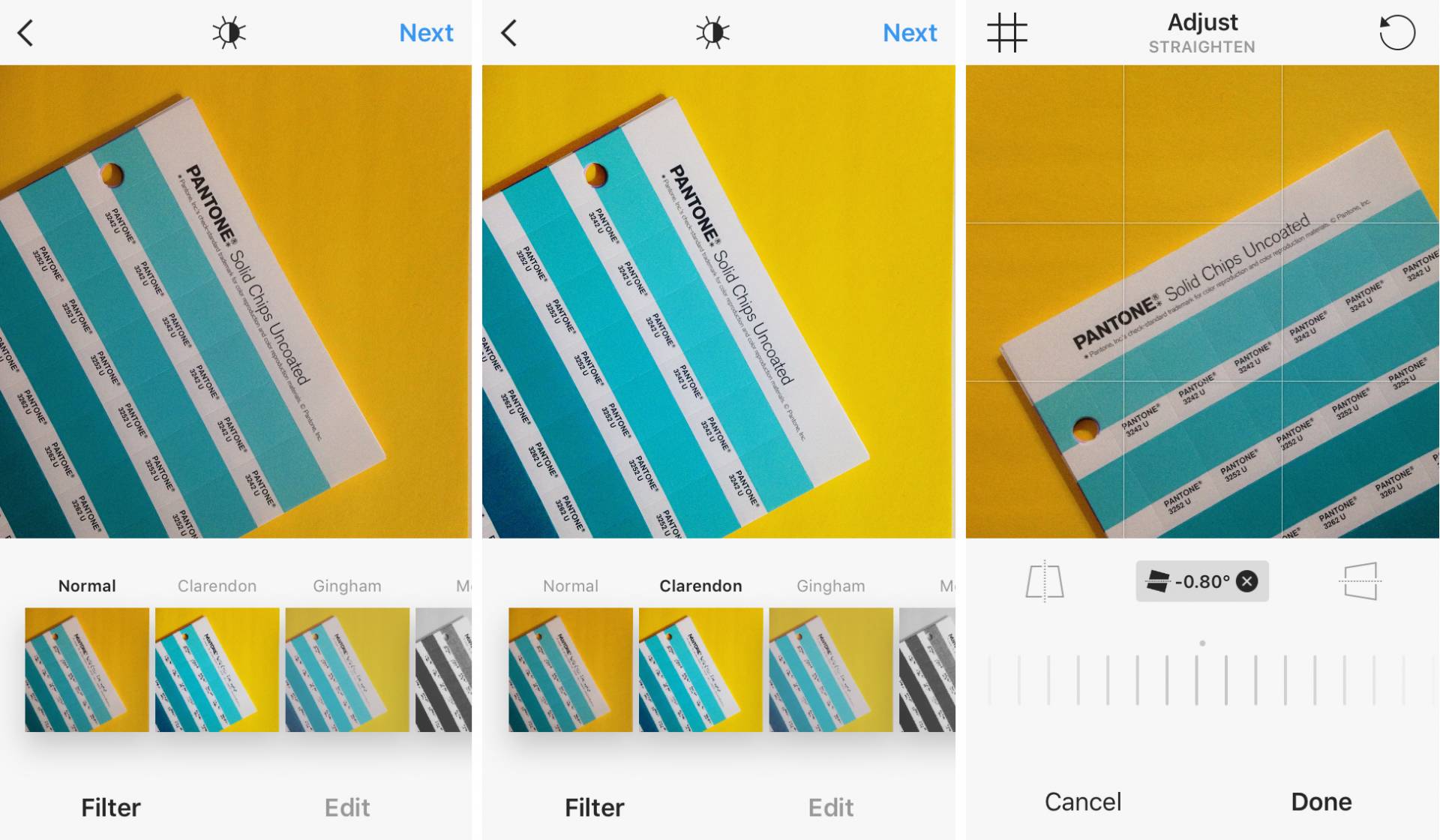 So because of my flat’s awful lighting I knew that the image was going to be quite yellow toned and I’d need to cool it. I don’t usually use the filters on Instagram, but after playing around with the Editing tools on their own a bit I just preferred the look (and ease) of Clarendon. It’s a really blue toned filter, so unless blue is your thing you’ll rarely use it compared to the other filters.

I’d managed to take the photo quite straight on, so I didn’t edit the angle of the image that much, just rotated it and tilted it by 0.80 degrees. This gave a good amount of negative space with a dynamic composition and a balance between the two really bold colours – lovely!

I love a bit of contrast, so I upped that along with the highlights. This made the white of the Pantone sheet whiter and brighter – it’s subtle but worth it! I also decided to take the warmth of the image down a touch, just because I hate yellow tones and it makes the yellow brighter – can you see the difference!? 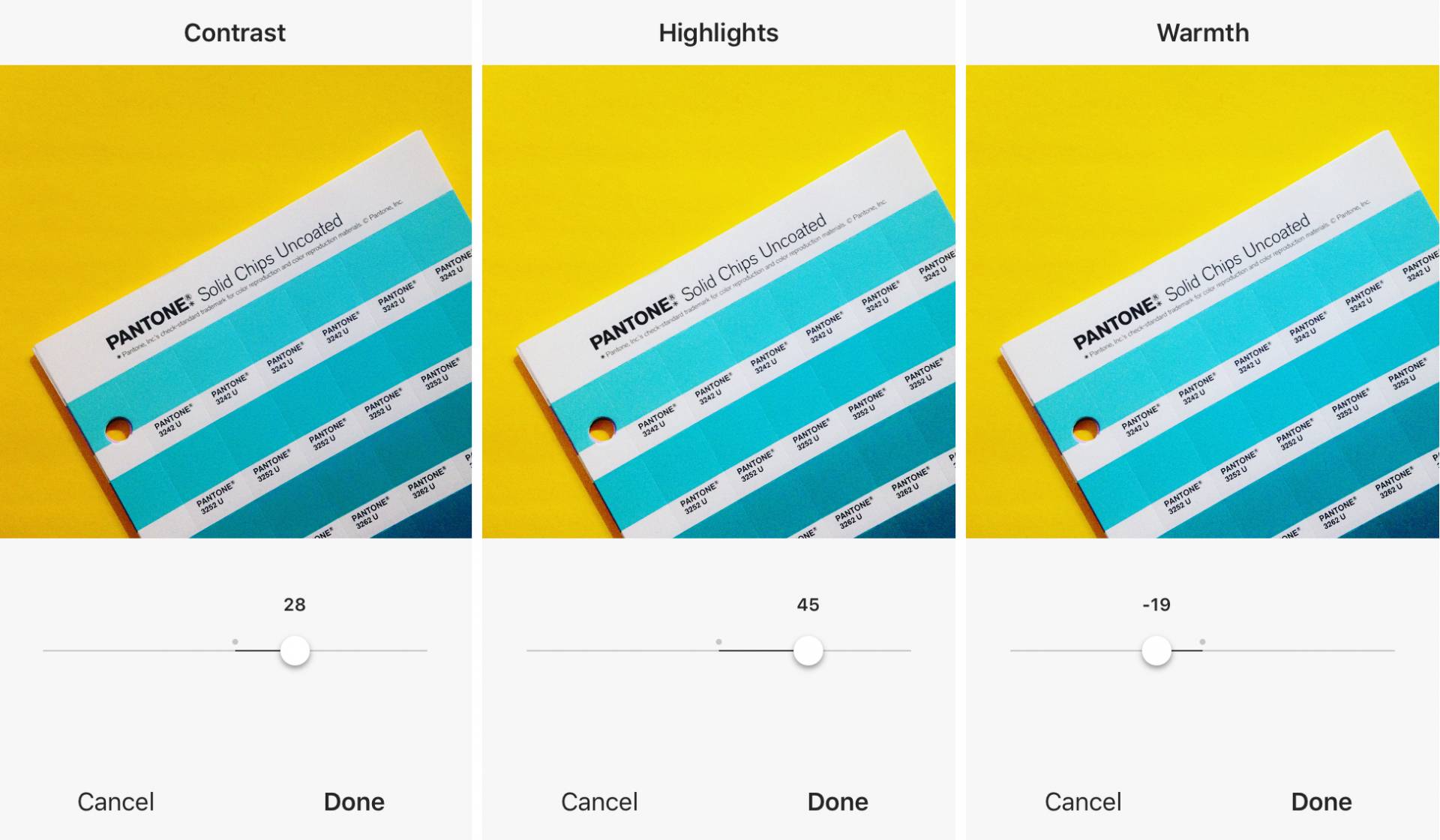 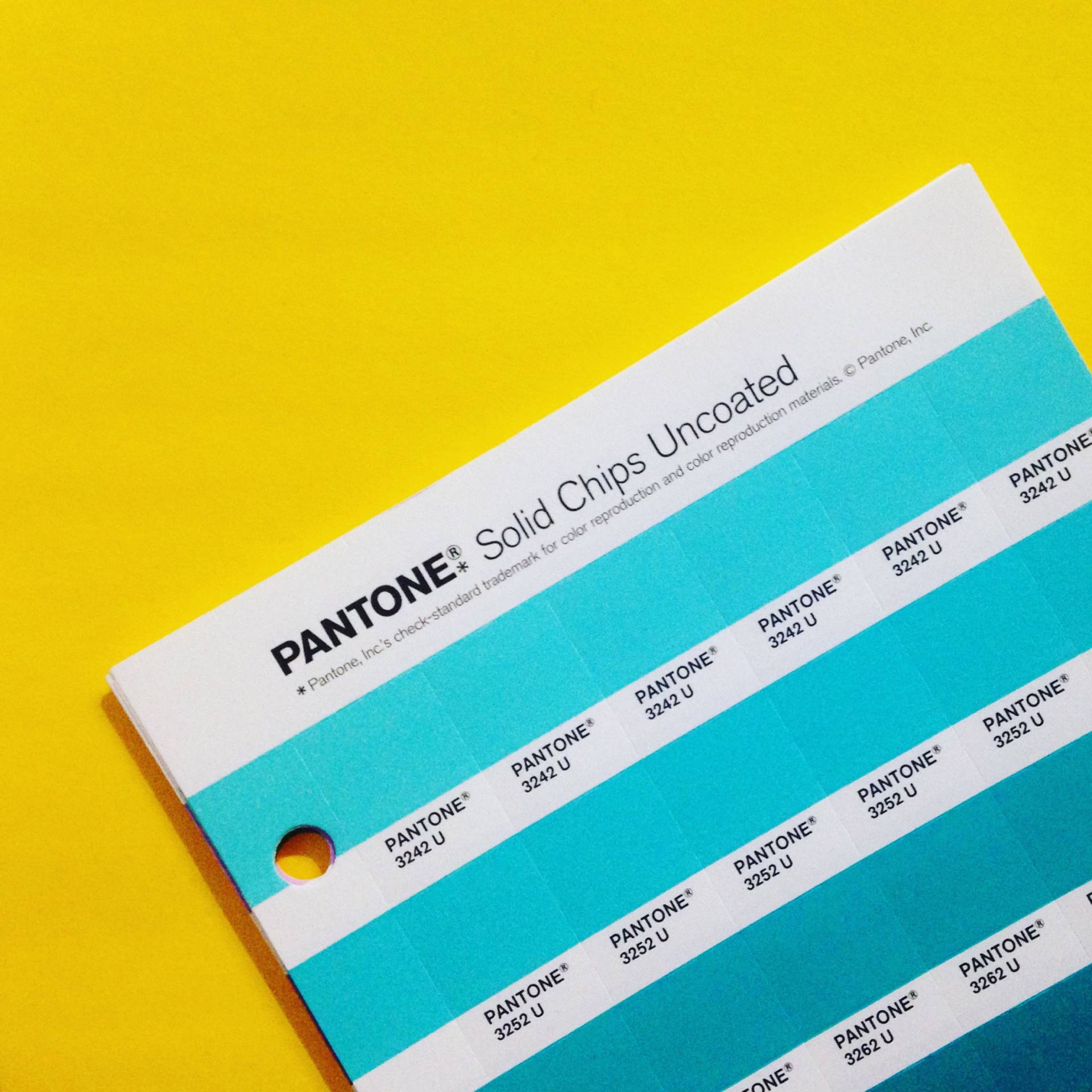 And there’s the final image. I seemed to be going through a bit of a blue and yellow phase that week, which is a bit weird, but just look how they all fit together… so nice. I wish my feed could look like that forever! ha 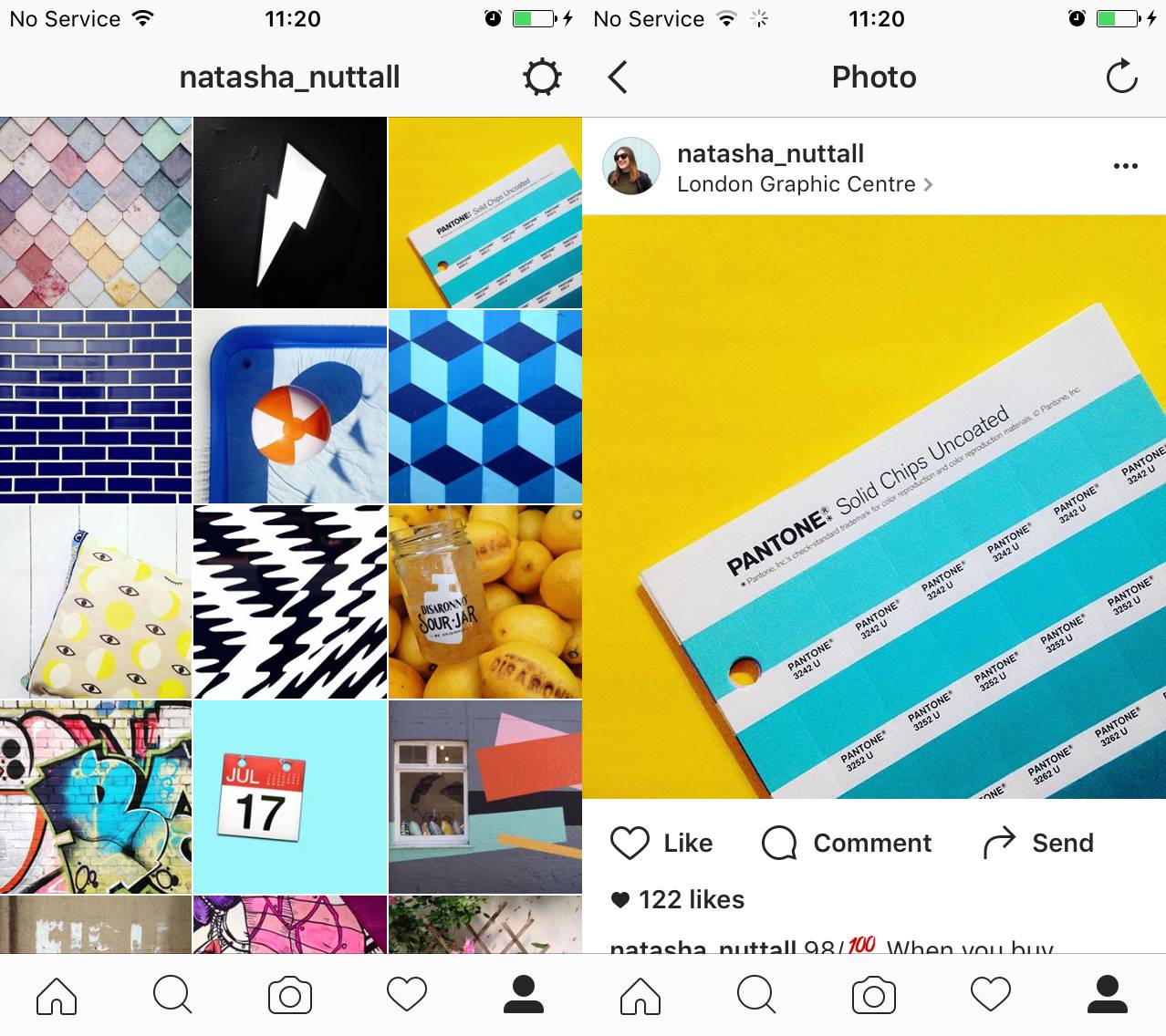 And again, despite a lot of people having no clue what Pantone chips are, it did well in terms of engagement (for an account of my size anyway). The caption probably helped with this one… I picked up the Pantone chips in a lucky dip at London Graphic Centre because they matched my nail colour. How could I leave them? It was meant to be if you ask me!

And that is a little behind the scenes look at how I edit my Instagram photos. I hope you found that interesting? I tried to give as much detail as I could whilst explaining it without rambling on too much. Obviously every image on my Instagram is different, so don’t think that I take the exact numbers (on the contrast, highlight and warmth options) and edit all photos to those. I honestly just do it by eye, having learnt what I like and what I think works.