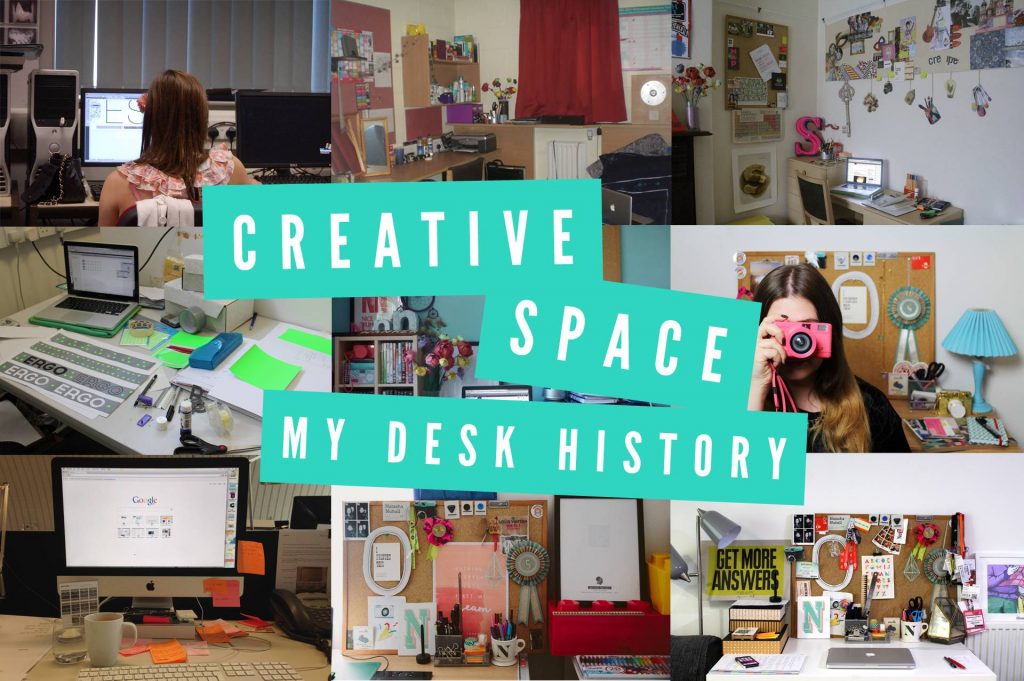 Sorting through one of my hard drives the other day I found this montage, probably the earliest ‘photo’ I have of my creative space: 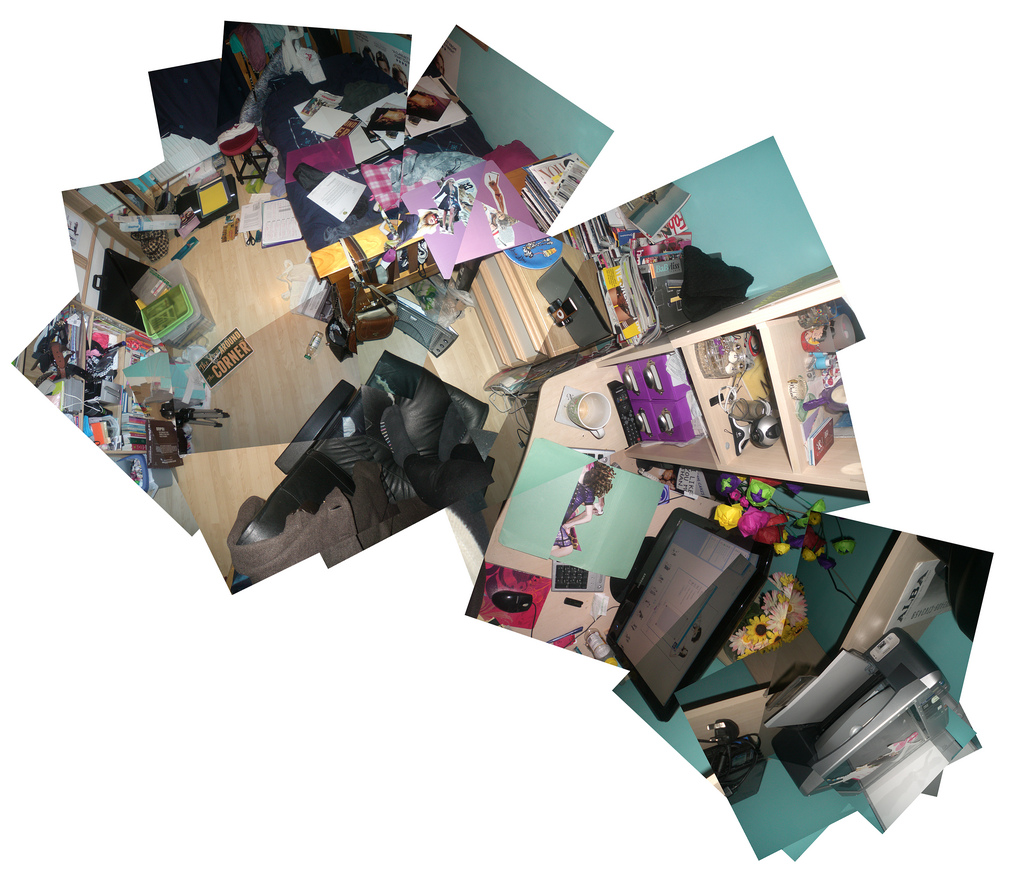 Apart from questioning why photo montages were ever a thing, it got me thinking about my working space and how it had developed over the years. It didn’t take long for me to find several photos of my desk – why is it that creatives take photos of their desks? On the face of it it’s a bit weird, but I guess it’s the place where we spend most of our time; a place where the magic happens! So I thought I’d share a little history of my working mess/space – let’s travel back in time…

Our first stop on Memory Lane is 6 years ago in May 2010, where my working space is mainly in the computer room at college. Here I’m working on my Final Major Project, a Graphic Design Festival called DES!GN… how inventive of me (the project itself wasn’t actually that bad). I used to spend a lot of time at college, even my ‘days off’ – I loved it there. 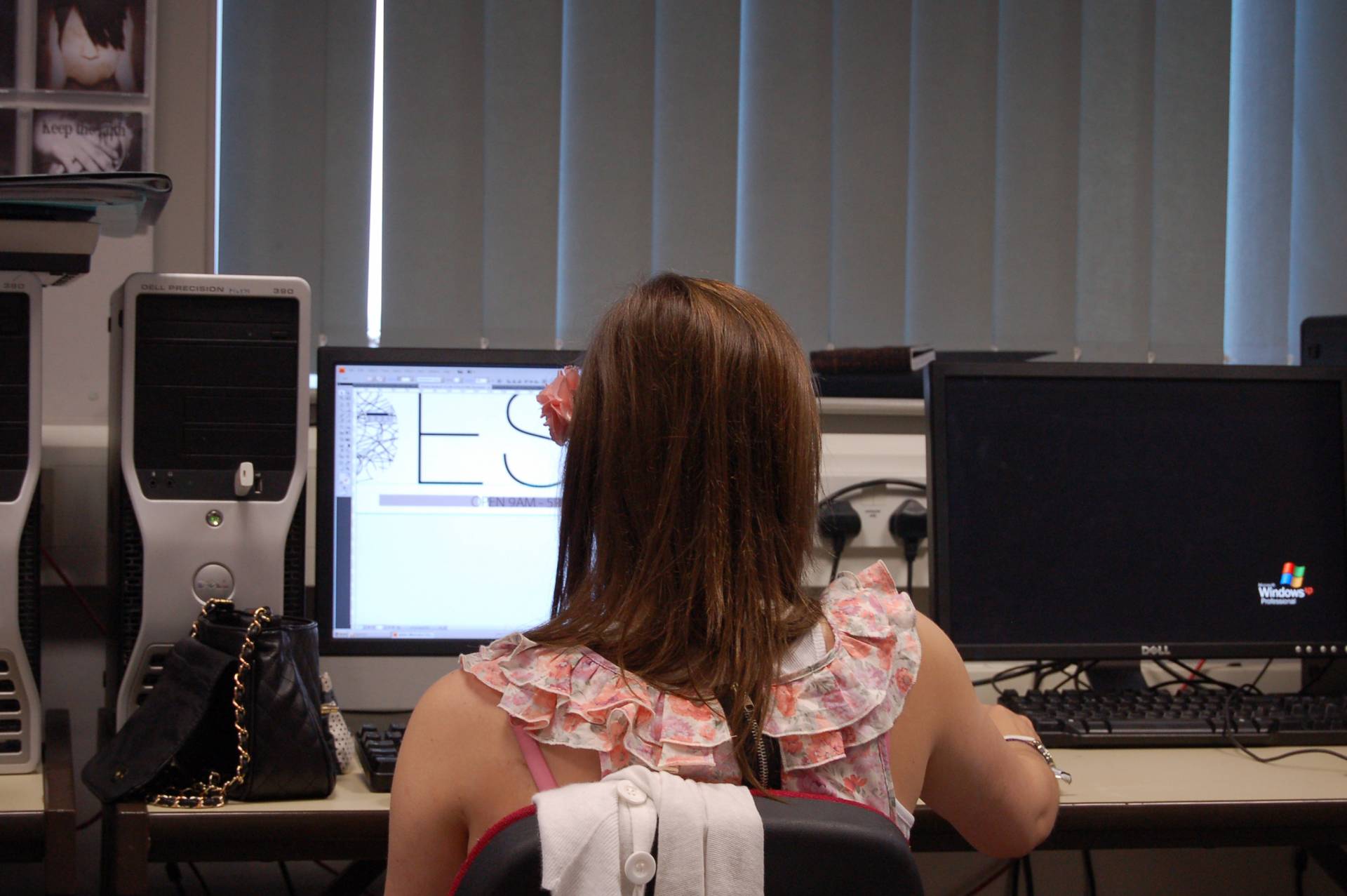 Welcome to my student halls room at The University of Lincoln in September 2010. Every room in the block was basically the same, and there wasn’t really much room for personalisation but I don’t remember spending much time working in here anyway (although I do remember one evening before a deadline where I was falling asleep making zines so my friend came over to keep me awake, even though he’d finished his work – thanks Bobbins!). I preferred to be a bit more social, working on the big table in the kitchen/communal space and inviting friends over. Luckily my flat mates were cool with this – they pretty much kept themselves to themselves anyway. 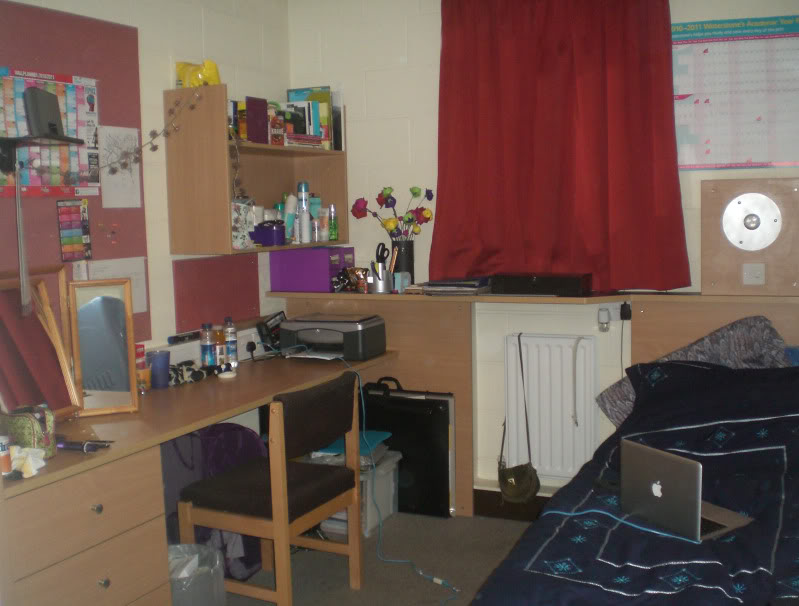 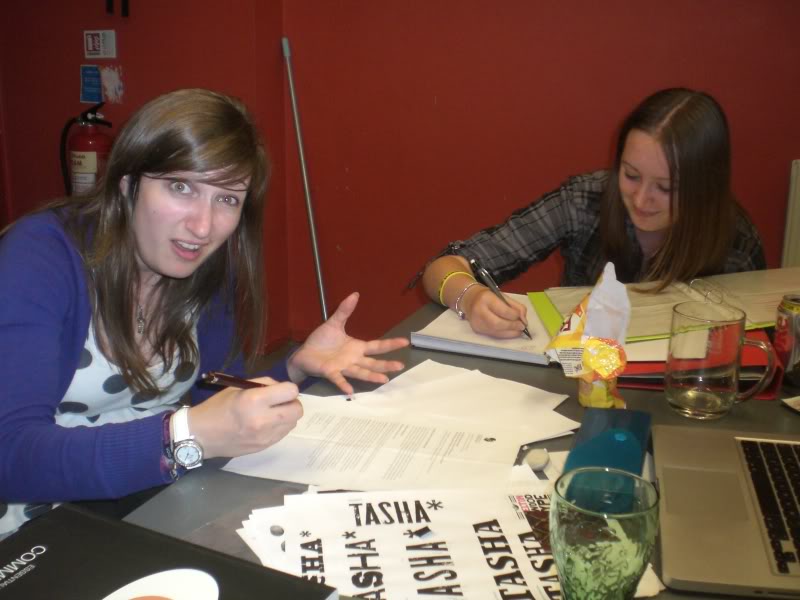 In August 2011 I moved into a shared house with some of my course mates and really put some effort into my creative space. With tall ceilings and a picture rail, I decided to make the most of the space and hand a strip of wallpaper to stick inspirational bits and bobs to. This is the first appearance of my cork board, which I used to curate memories via gig tickets, business cards and photos. The desk that came with my room was quite small, so most of the time I preferred to work on the floor so that I could spread everything out (A habit which I obviously kept from the first photo/montage). I really loved that room – it had so much light and space and it felt like my first chosen home, because up until then my parents had chosen where I lived. I was pretty sad to leave that house, my little family of housemates and Lincoln in general really. 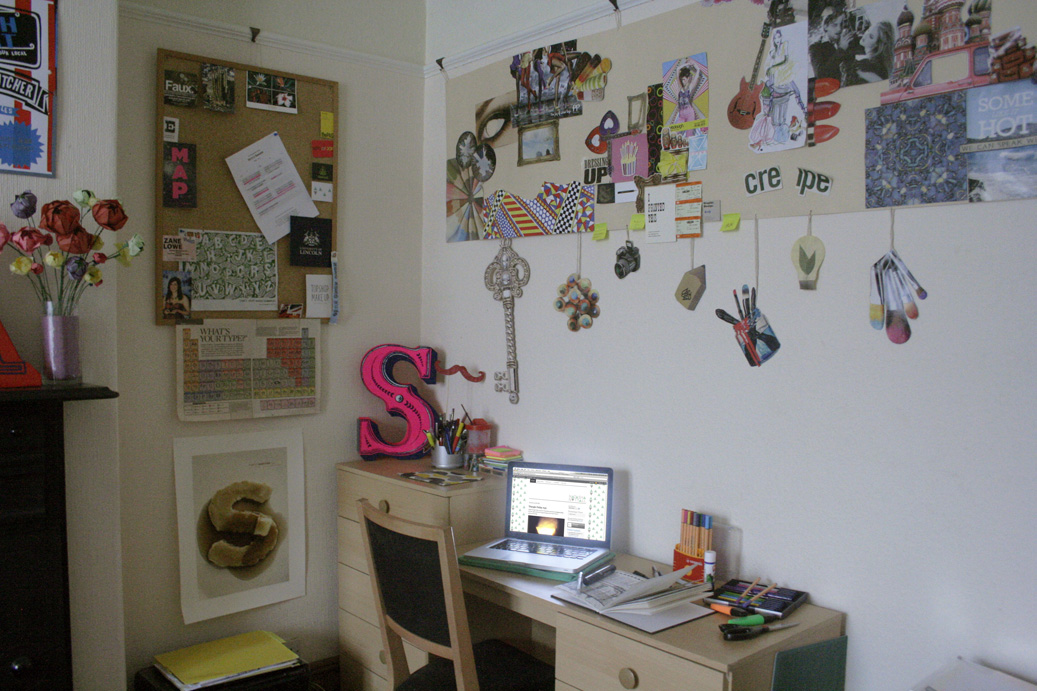 But before I get too sentimental, towards the end of my degree in April 2013 I was spending a lot of time working at the studio. By this point there had been a bit of a divide in our year because everyone was working hard on doing their own thing, but if you needed a bit of company you could always surround yourself with people in our battered Uni building, more affectionately known as TPH (Thomas Parker House – it doesn’t exist anymore and now UoL students have a shiny new building). 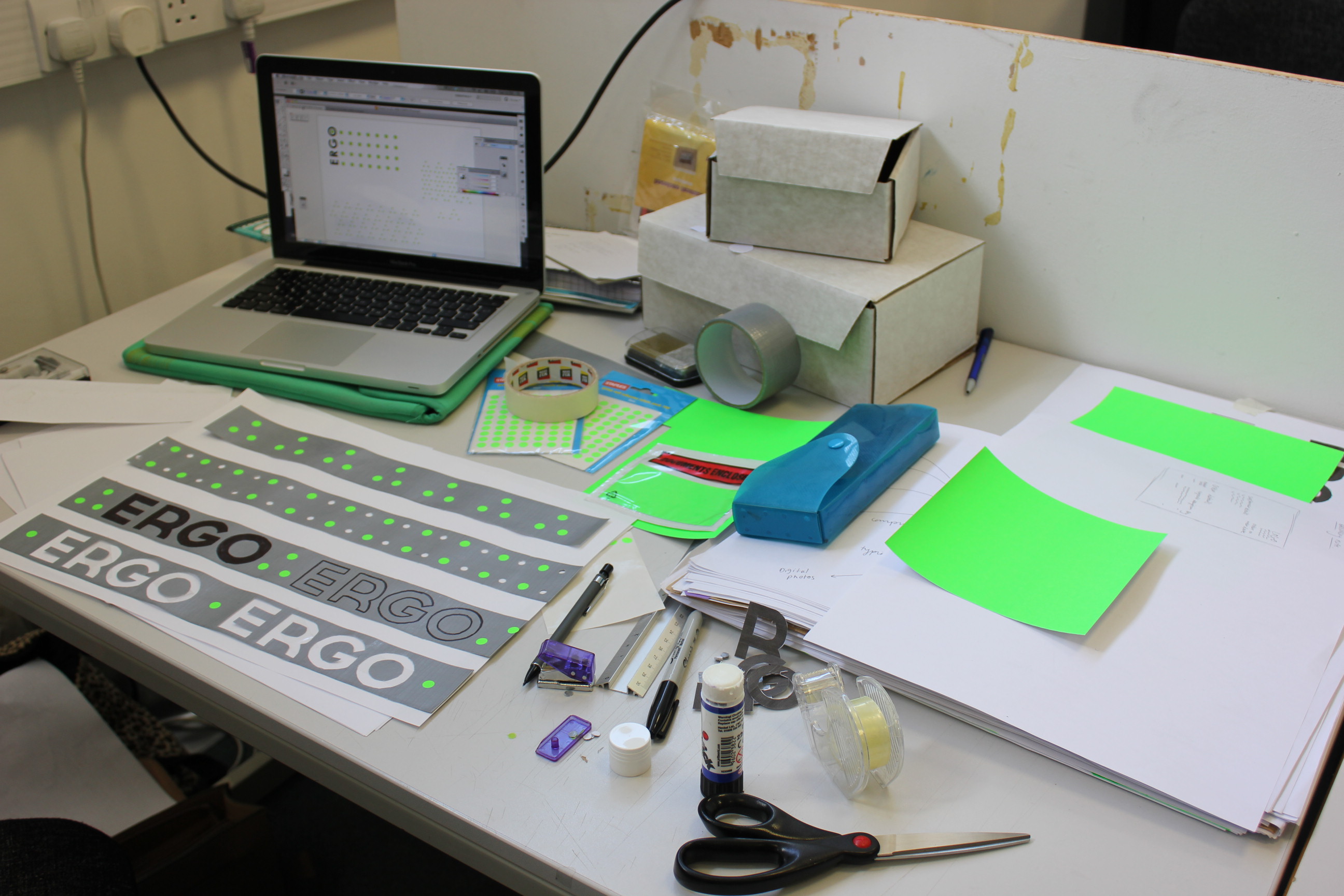 After finishing University, I left Lincoln I headed back to my parents house in August 2013. Feeling very lost and isolated (it’s a small market town in the sticks), I rearranged my whole room in the hope that having a nicer working space (I mean, you saw my pre-Uni desk area) would kick my bum into gear and help me find a job. Well, it didn’t really help me that much (I did briefly head back to Lincoln for an internship) but in January 2014 I wrote a blog post that changed EVERYTHING. And if you don’t know the story then you can find out what happened here. 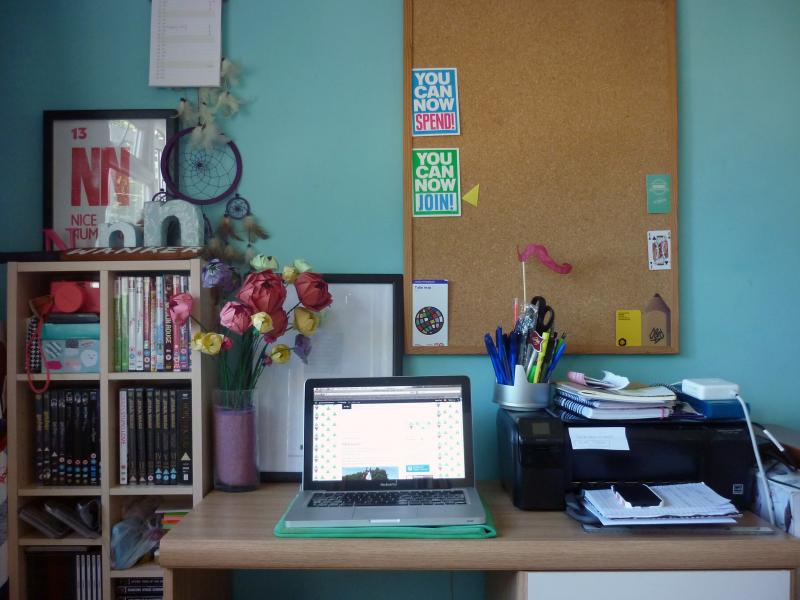 …because then in February 2014 I moved to London.

It was a few months of sofa surfing before I got my first room (and desk space) in London. I took this photo posing in front of my desk in October 2014, and that cork board has been a solid feature on my desk ever since. (It actually still looks pretty similar now if you compare the latest photo – I still have the rosettes, stamps, button awards and Legoland driving license displayed!) 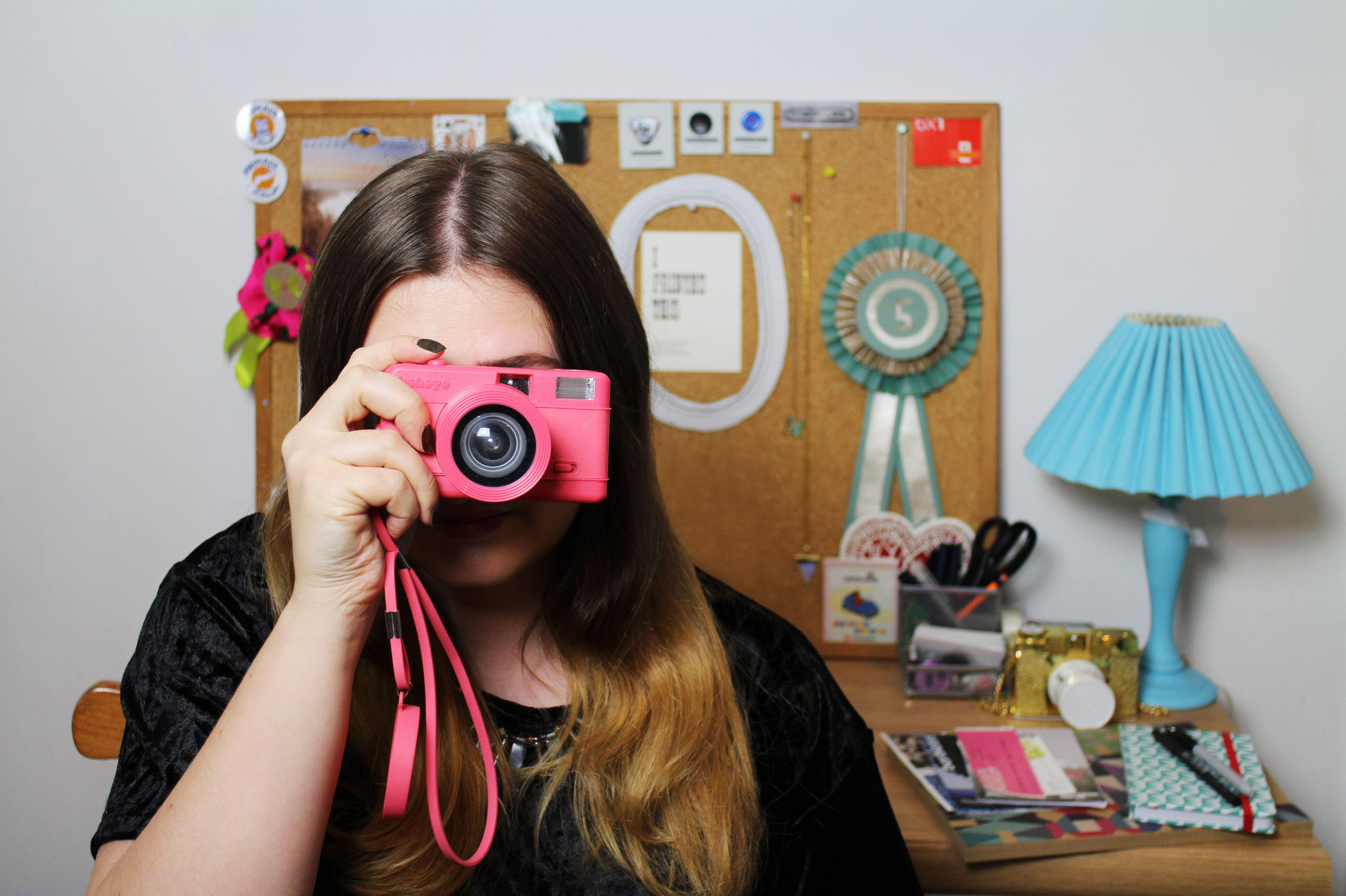 Whilst working as a Junior Graphic Designer, my daily view was a lot less appealing than my home desk set up. We weren’t really allowed to have anything ‘fun’ or for display on our desks, just a computer, phone and lamp really. I tried to jazz it up a bit with brightly coloured post it notes, but they were more because I needed to remember things rather than for decoration. I 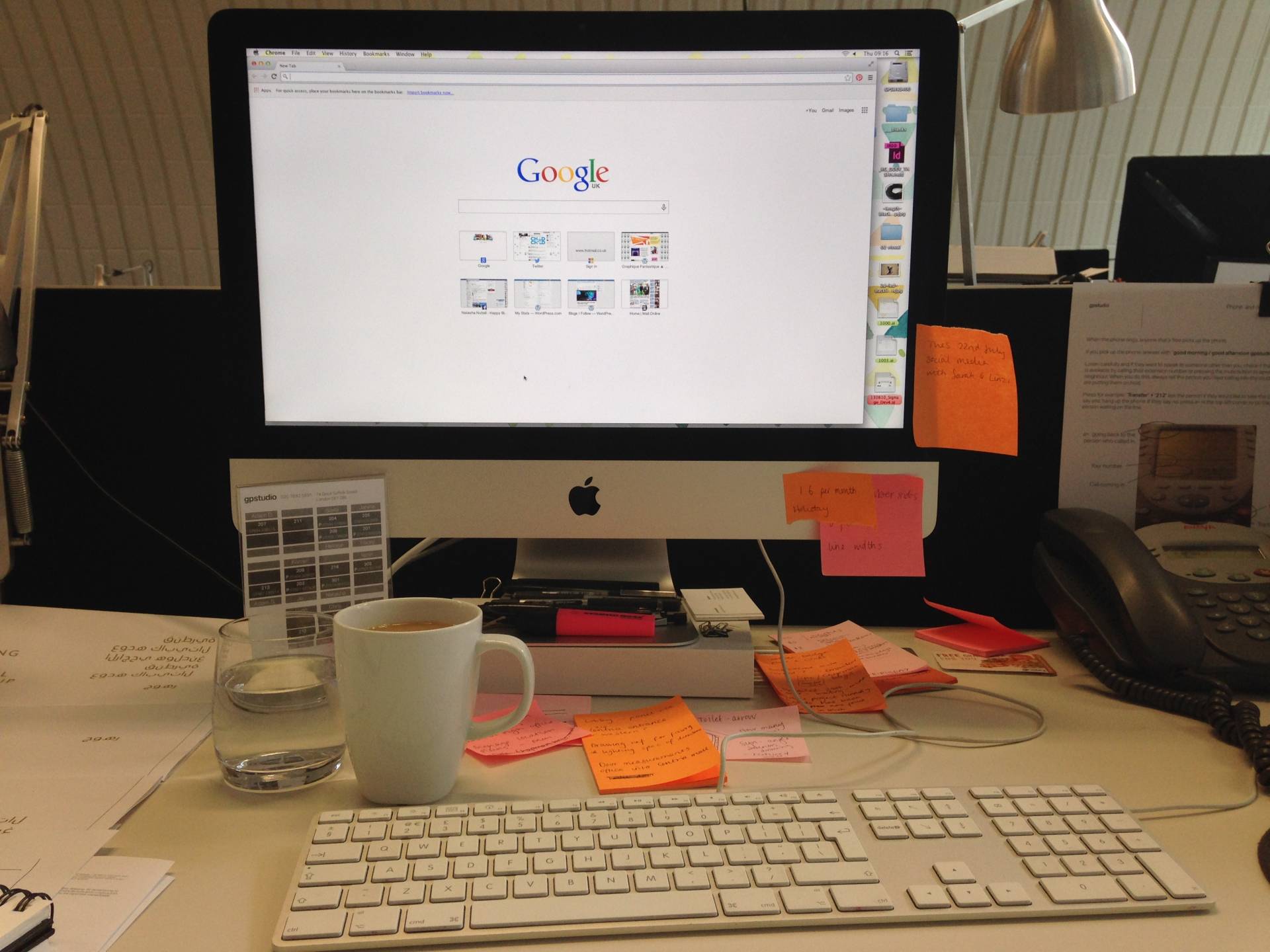 After quitting my job in December 2015, I found myself taking a permanent residence at the desk in my room. 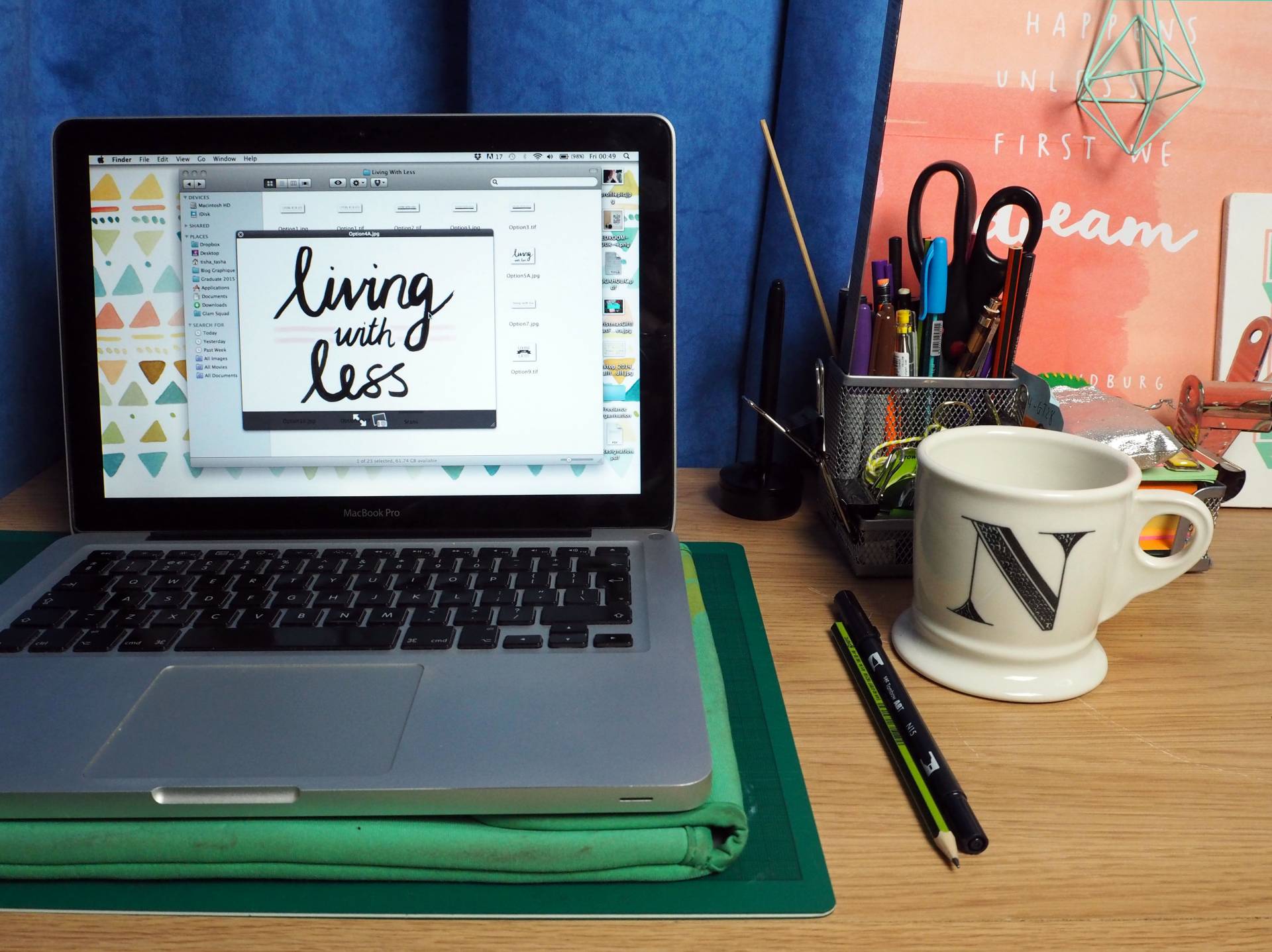 In March 2016 the lovely Jo Crawford photographed came to my house to photograph my desk space for her Bloggers at their desks series. And because I’d spent so long tidying everything I decided to film a Desk Tour video for my Youtube Channel. 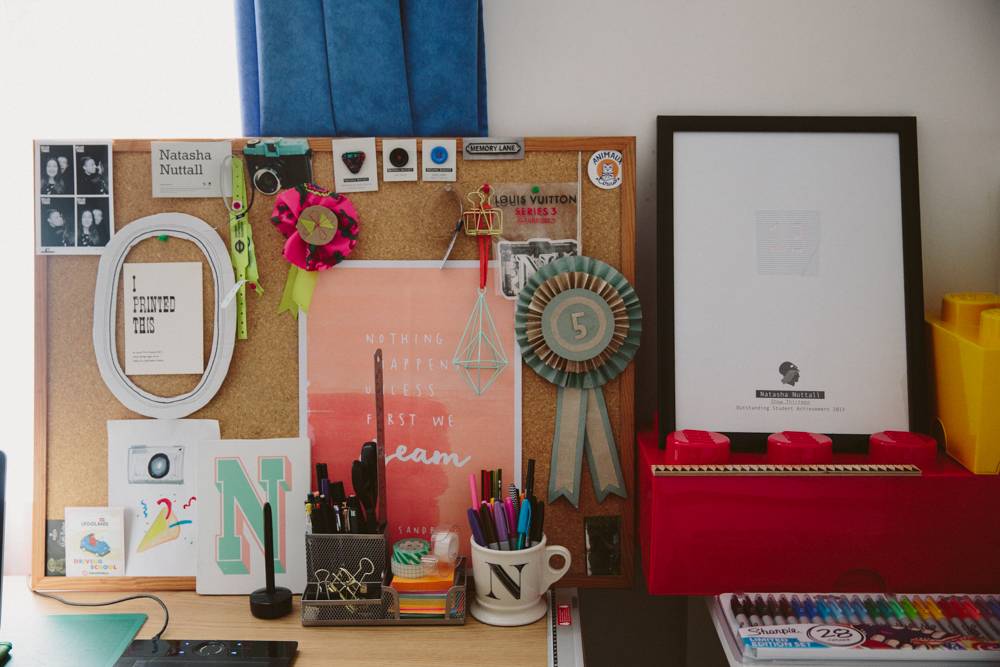 Which brings me right back to the present day, sitting and writing this post at my desk in our new flat; September 2016. As you can see, it’s kinda similar to the set up that I had in my last room with the cork board laid landscape against the wall and decorated with lots of things. I’ve got a new white desk (which was a £15 BARGAIN from IKEA) with lots of leg room underneath (because I’m a fidget) and I’m feeling quite happy with this little set up at the moment. 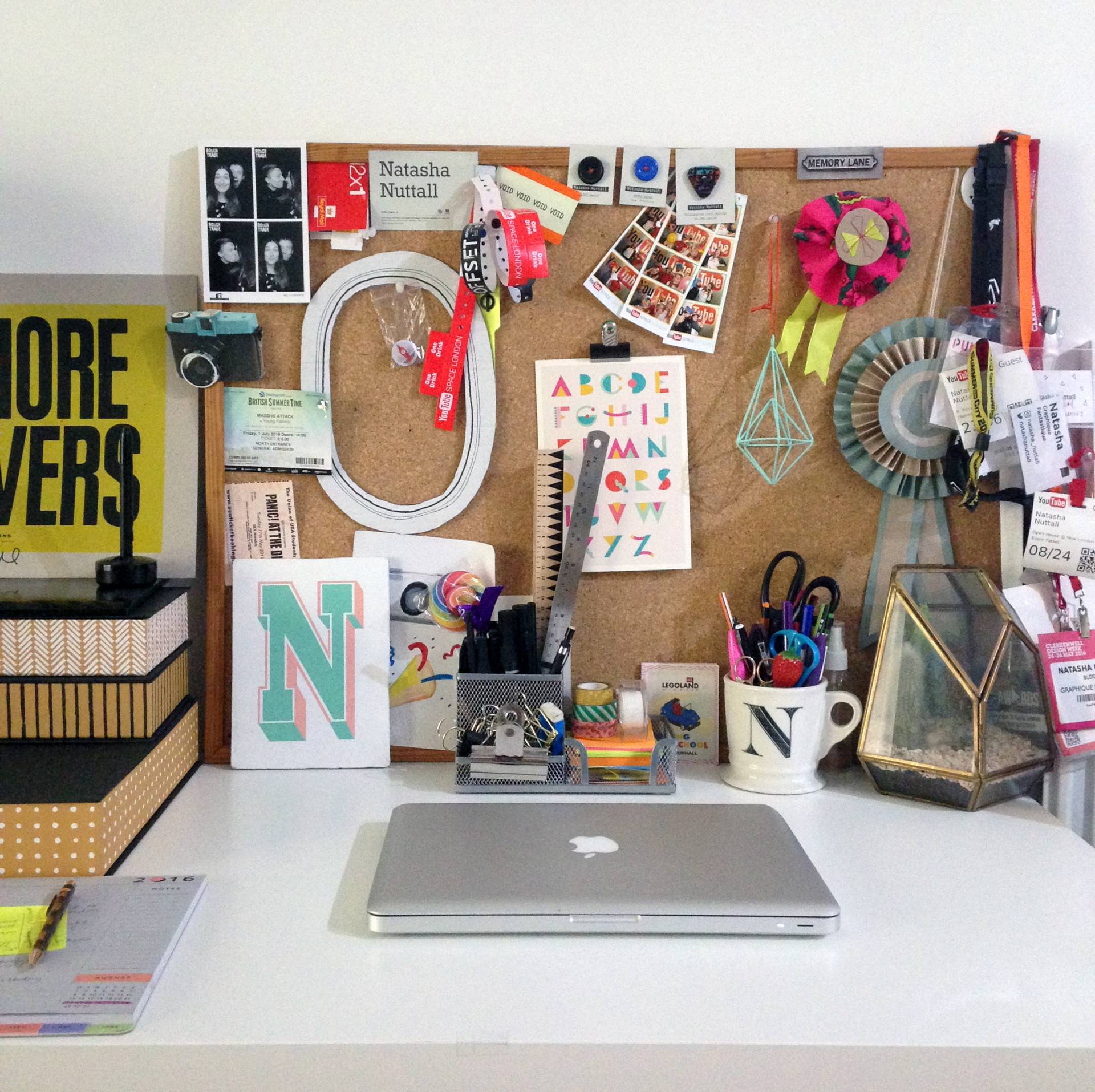 I might film a new Desk Tour video if that’s something you guys would be interested in seeing – leave me a comment and let me know!

What does your creative space look like now compared to 6 years ago? Maybe you’re sat at the same desk? I’d love to see, so I’m tagging a few of my favourite creatives; the lovely Ella from Ella Illustrated, Amy from The Creative Outlook, Daisy from My Green Cow and Fab from Snail Mail Love – please send me blog post links or Tweet Me photos.

And if I haven’t tagged you, I still want to see your desk space anyway 🙂

There Will Be Fun: Magic & Mystery at The British Library