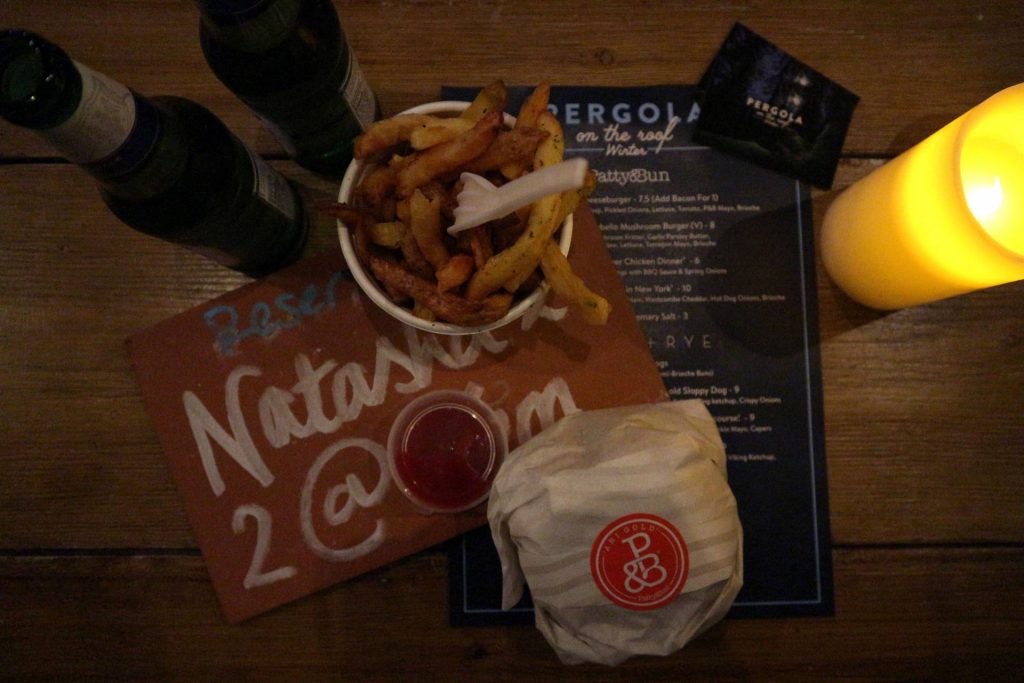 December is notorious for being the dark & dingy month. That month that nobody wants to be outside… unless pretty lights & hot food are involved. Some might head to Hyde Park for that wintery fair which I can’t even type because it stresses me out – overpriced food, rides and massive crowds of inconsiderate people. Do I sound like the Grinch yet? Luckily there are better options for a festive evening!

Some might think going to the top of a car park is a bit odd (I don’t know what my parents would say to that idea) but (despite the grumpy stereotypes) us Londoners are open minded and optimistic. Y’know it’s pretty amazing what you can do with some foliage and bark chips, and Pergola on the Roof would know. You might have heard people talking about going for drinks at Pergola on the Roof back in the warmer months? (P.S. I didn’t make it) Well it’s winter now, but that doesn’t stop the neon a glowing!

From the outside, it looks like the Television Centre car park, but with the push of a button (in the lift) you’re transported to… well, join me on the journey: 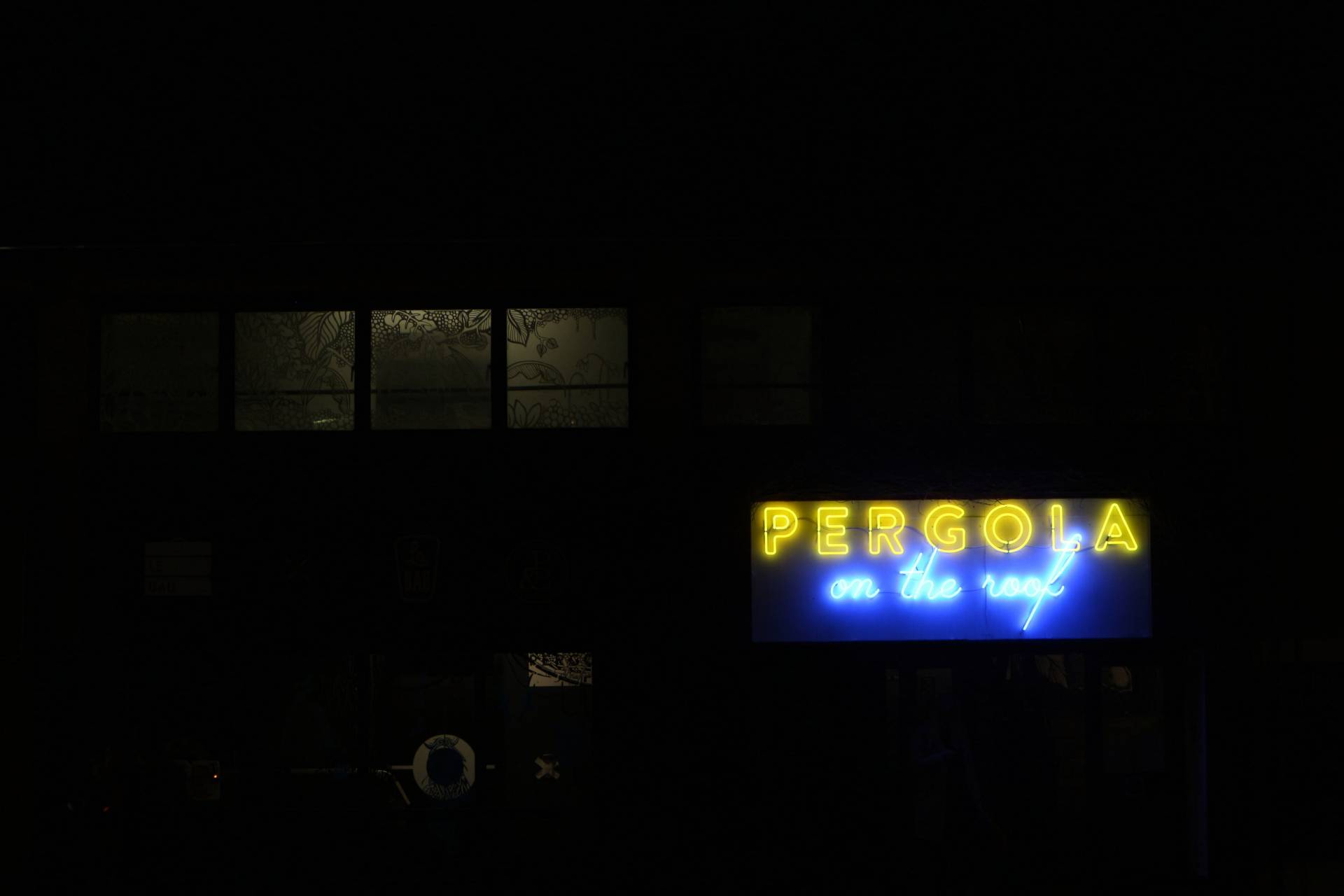 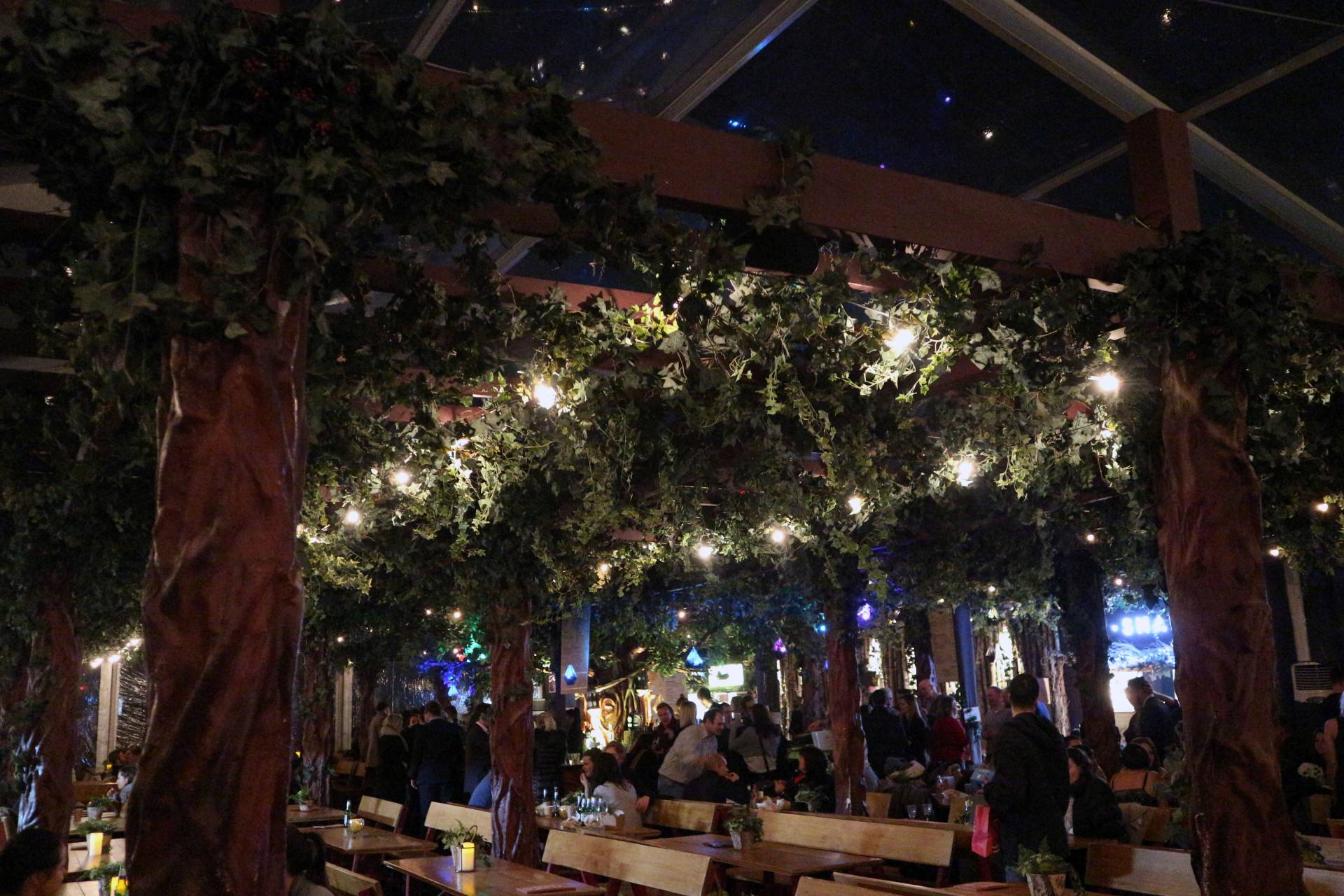 Accompanied by Jack (it was date night!), I walked into what I could only describe as a Scandi-forest in the sky. It was deceivingly warm (I’d wrapped up in lots of layers because I was expecting to be cold), buzzing with merry people and honestly, quite magical.

Like I said it was buzzing but not crazy busy (it was a Wednesday at 8.30pm) but I’m glad we had booked a table (which you can do for free via the website) as we simply walked in and got seated straight away. 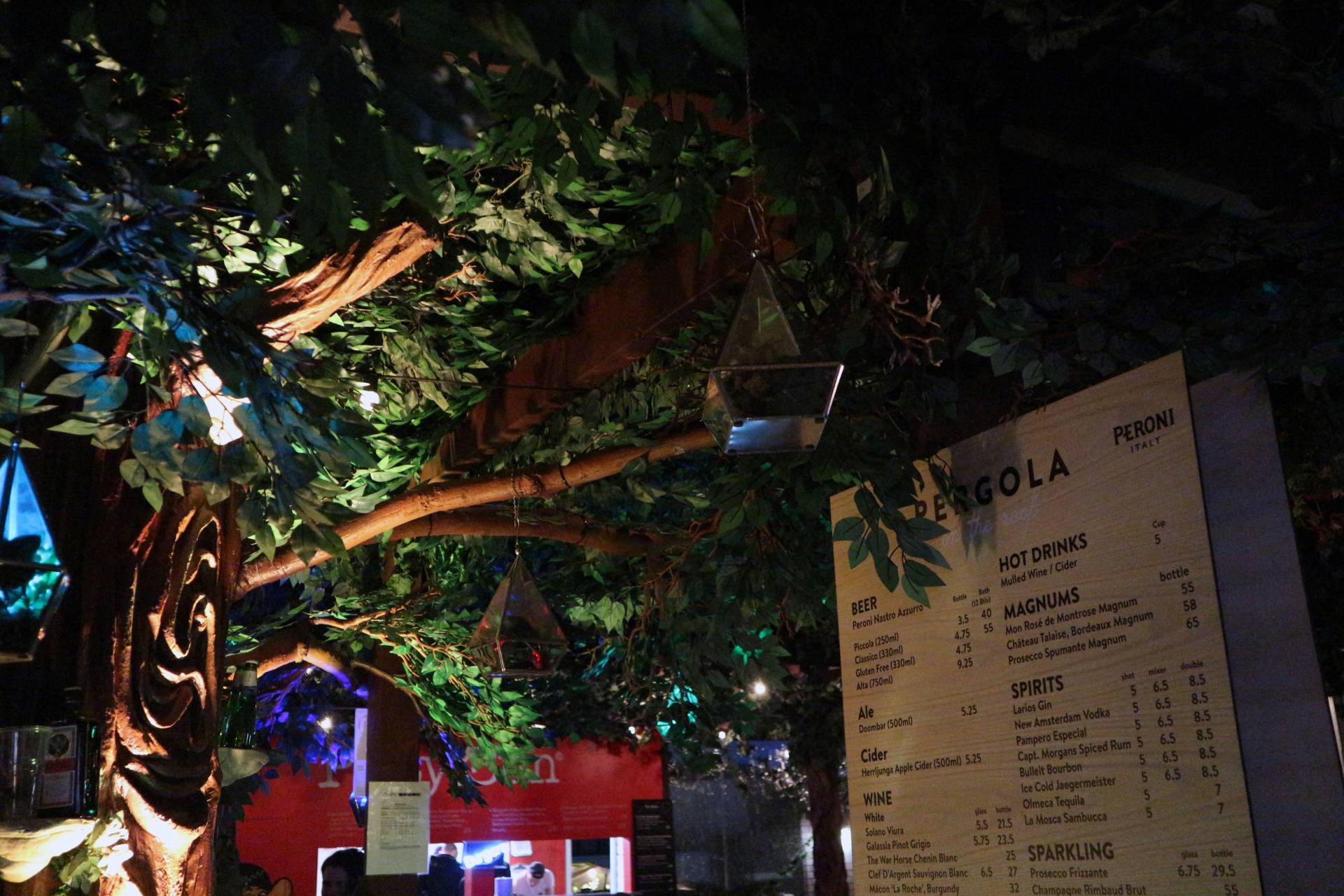 After soaking in a bit of the atmosphere, we settled down to the important things: food options. As our table was literally 2 metres from Patty & Bun I couldn’t resist opting for a burger, which Jack said was a predictable choice – what can I say, I love a burger!? I’d seen Patty & Bun at a few other events but hadn’t yet sampled their meat so I thought it was time to test it out.

I kept it simple with the Ari Gold, which is essentially a fancy cheeseburger (think Brioche bun, Aged Beef, pickled onions and all of the condiment trimmings) alongside some Rosemary salted chips. Oh, and a Peroni (or two) to stay hydrated – of course I quickly flatlay-ed it before Jack came back with his food… 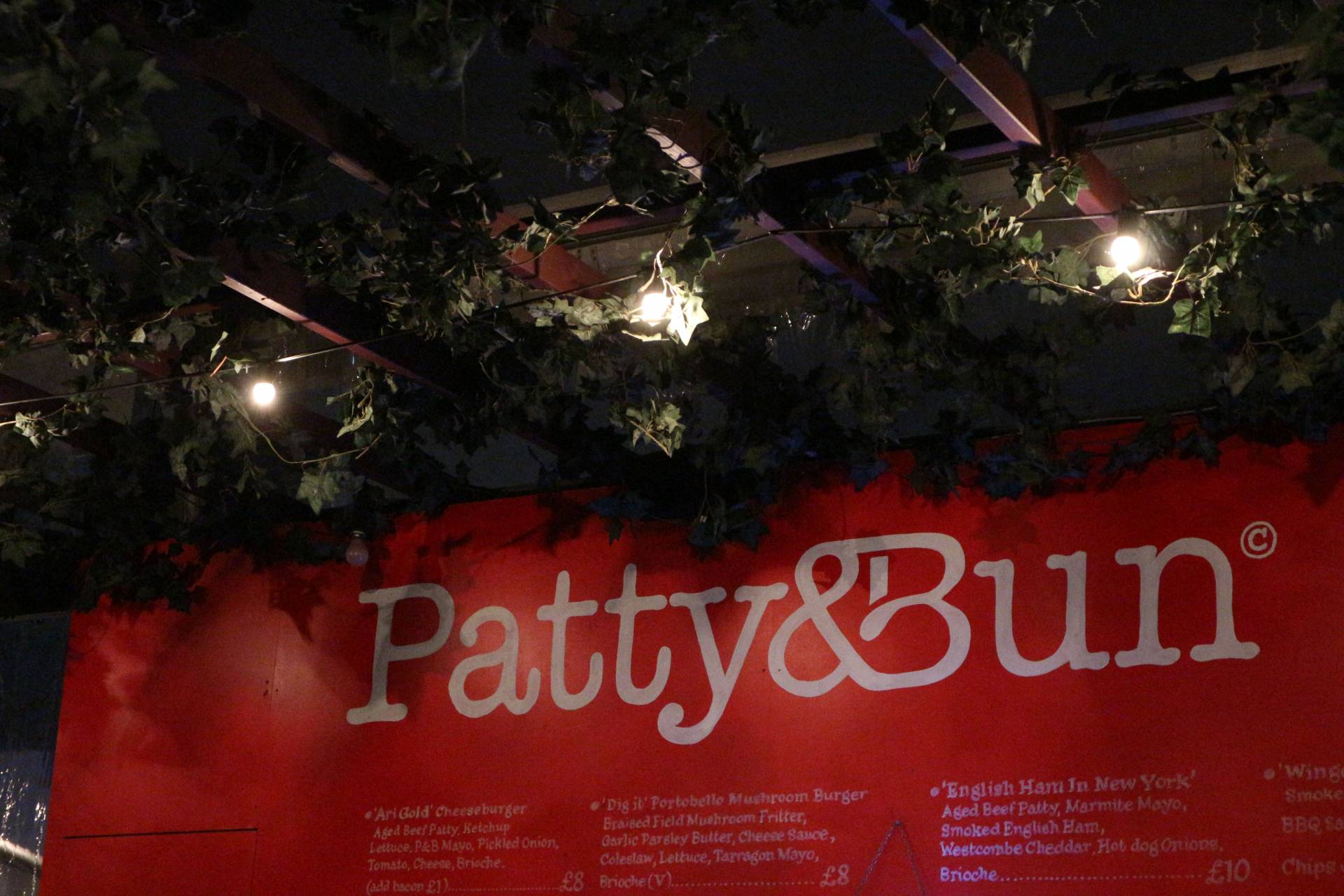 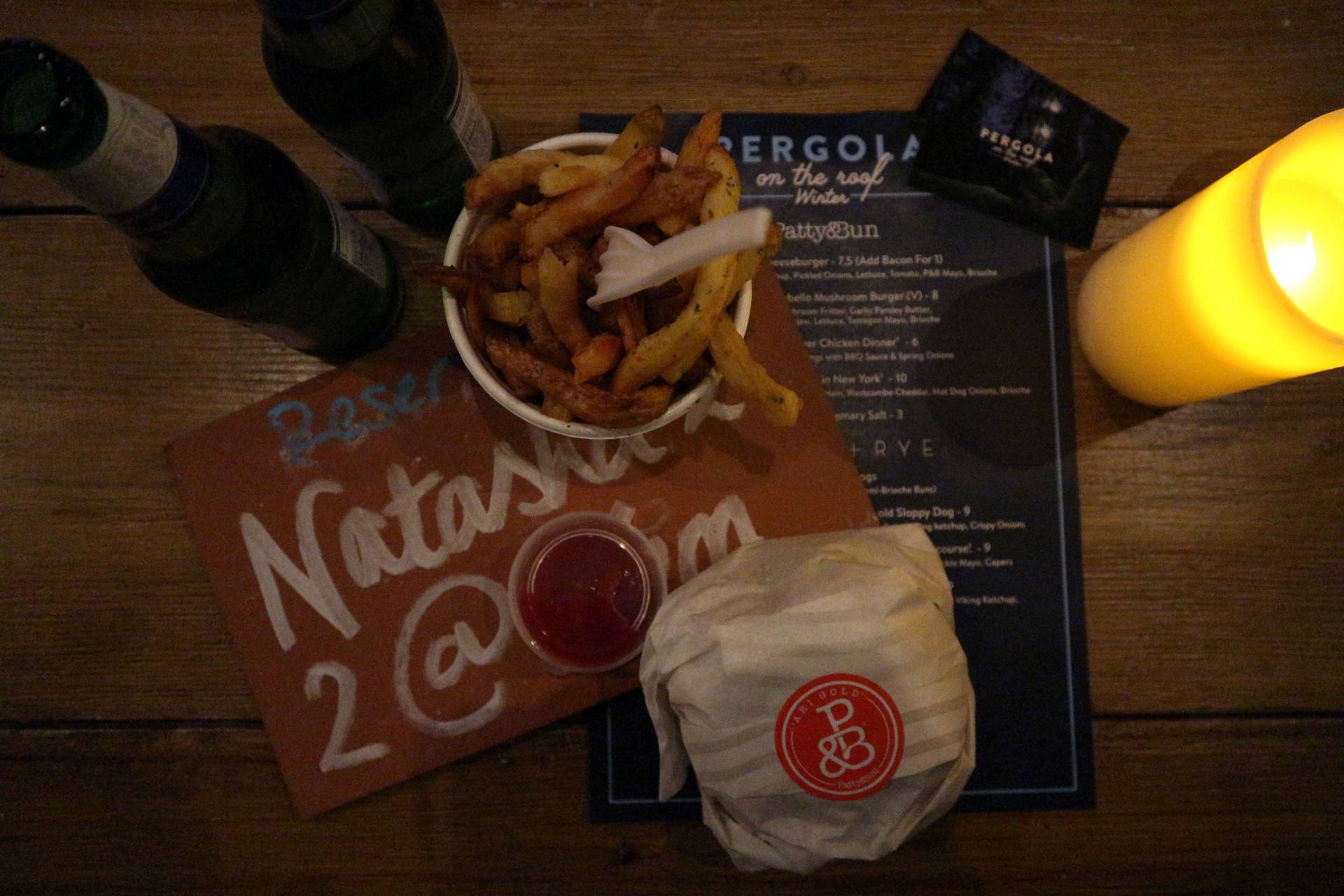 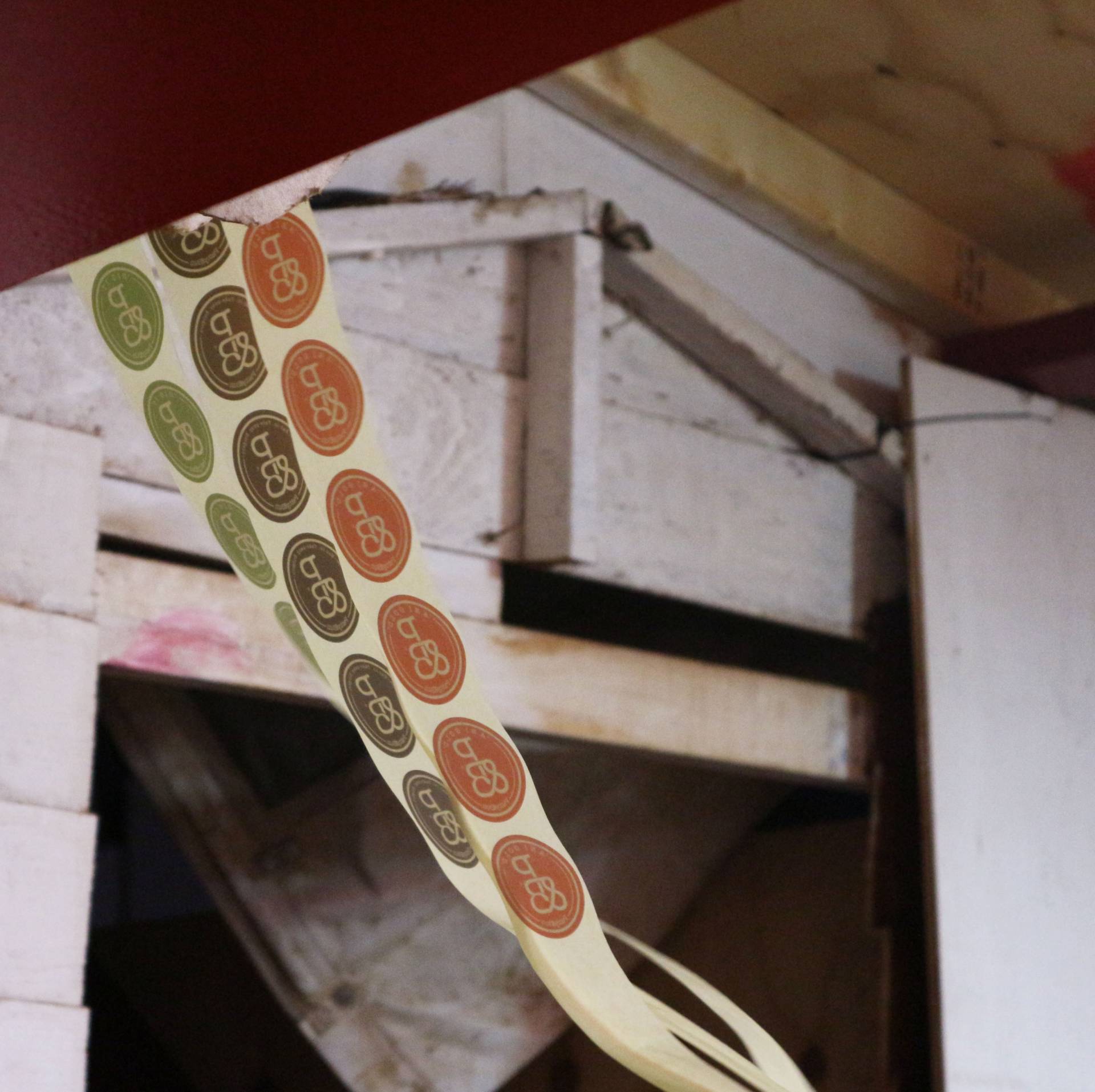 Ok, let’s talk design before I bite into my burger. In terms of branding, I think Patty & Bun have a good balance of simplicity and detailing. Their tagline is ‘Eat in, takeaway burgers’ which suggests that they are tasty but still a bit greasy, y’know, like a proper good burger van burger.

I like the simplicity of the full text logo mixed with the ‘P&B’ symbol and how they use it for the stickers on the burger wrap, which deserves a mention too. I didn’t take a photo (mainly because I was too busy demolishing the burger, ooops) but their burger wrapping has a cool concentric circle design which makes the burger the focal point as it’s ALL about the burger. Maybe I’m the only person to ever say anything about the wrapping, but hey, I’m a design geek alright? Anyway… the burger was pretty tasty and so big and juicy that I actually used a knife and fork to eat it – that’s probably all you wanted to know, right? Like I said, ALL ABOUT THE BURGER. 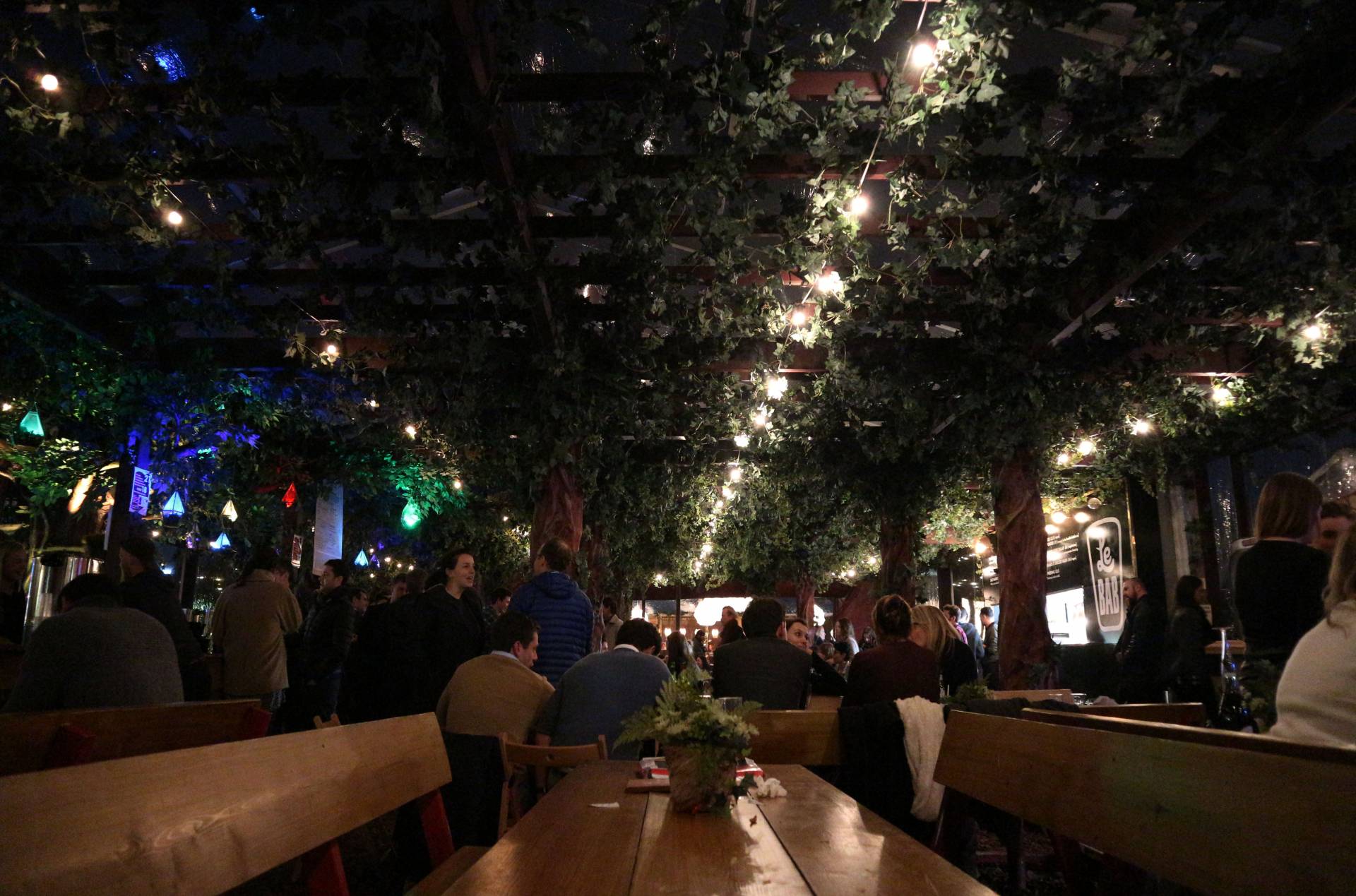 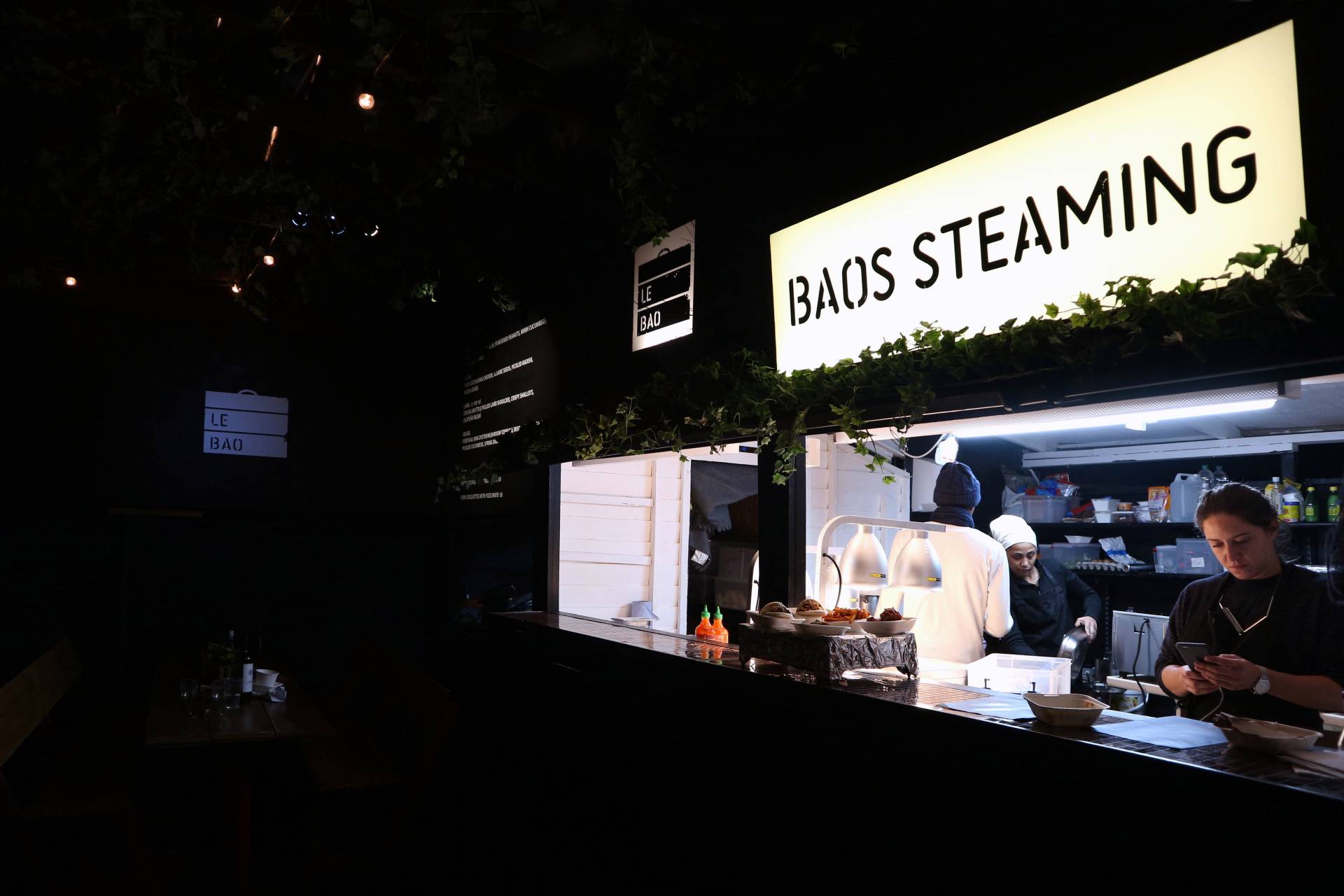 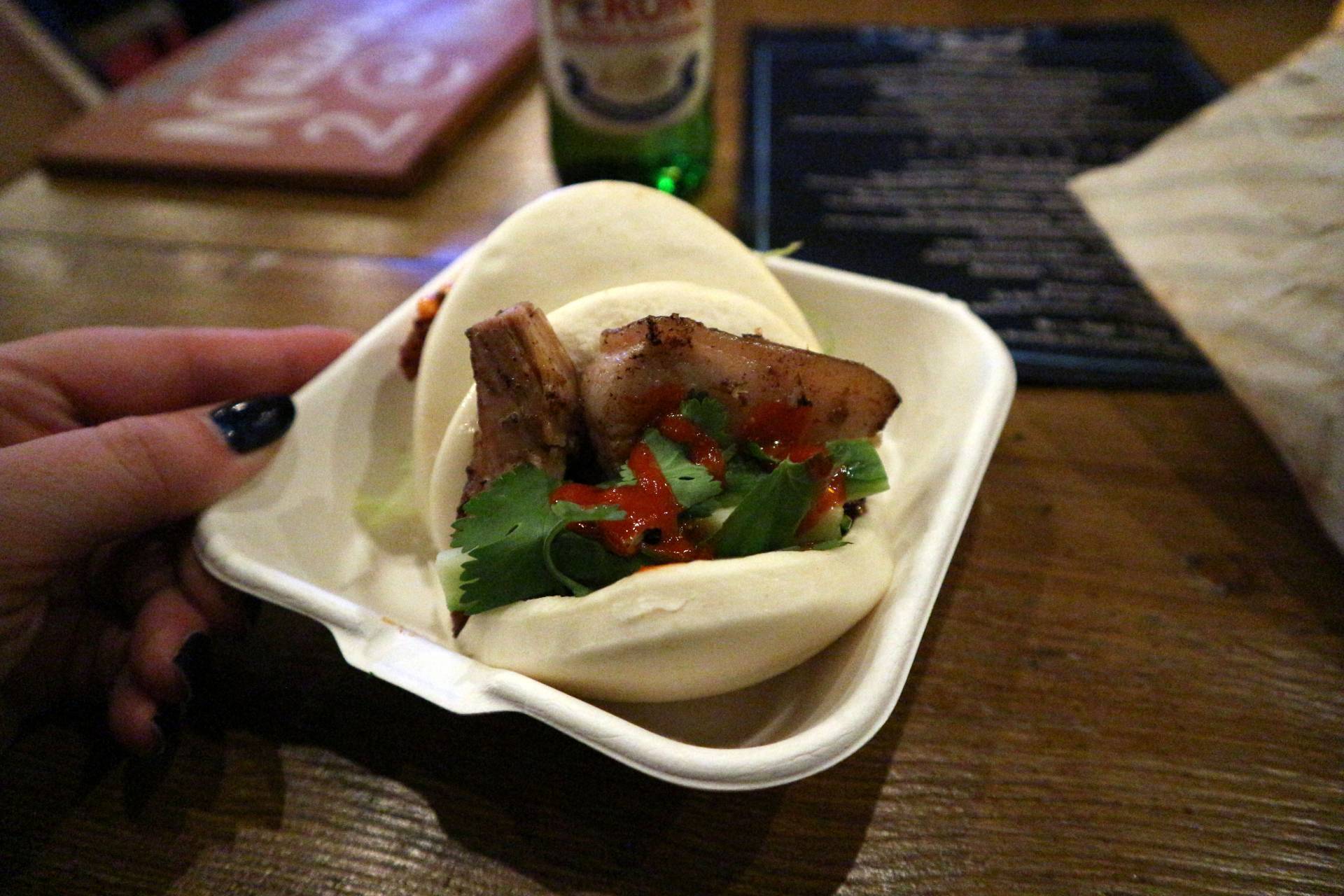 I already knew what Jack was going to opt for (he’s predictable too, bless him) after seeing the restaurants on the website – steamed buns from Le Bao! He chose the Pork Belly and Chicken buns, which had a bit of a kick teamed with a peanut paste – he said he enjoyed them both. He did offer me a bite to try the peanuts, but the steamed buns didn’t compare to my Patty & Bun. 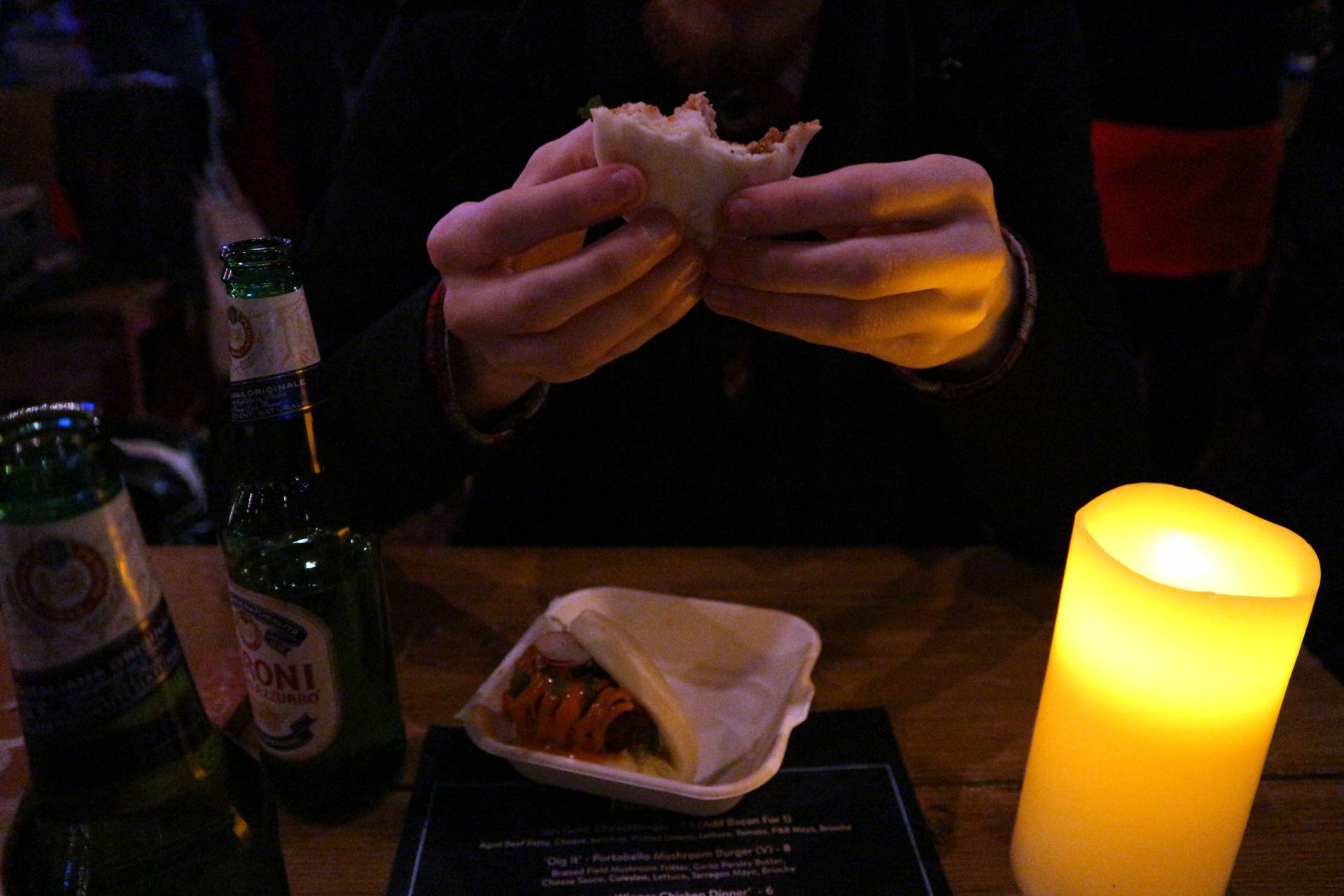 If buns aren’t your thing then don’t worry because there are 2 other food offerings from Danish restaurant Snaps + Rye (whose branding I love) and Le Bab, who offer a twist on… you guessed it, a kebab. Would also like to point out that both of these have options that sound perfect for a cheese lover – Emma Jane Palin, I’m talking to you. Check out the menu here for the full offering, including some great veggie and sweet tooth options. 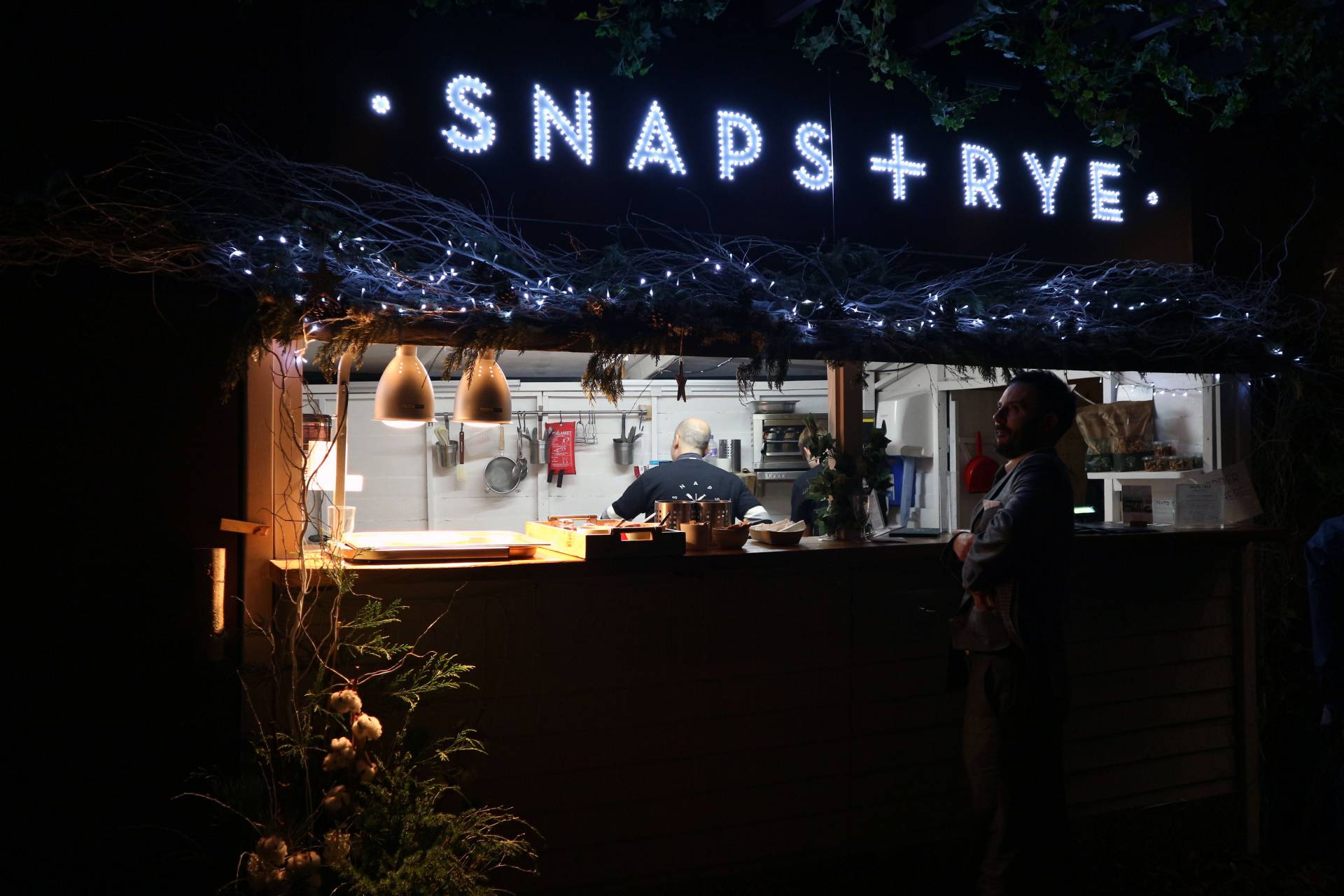 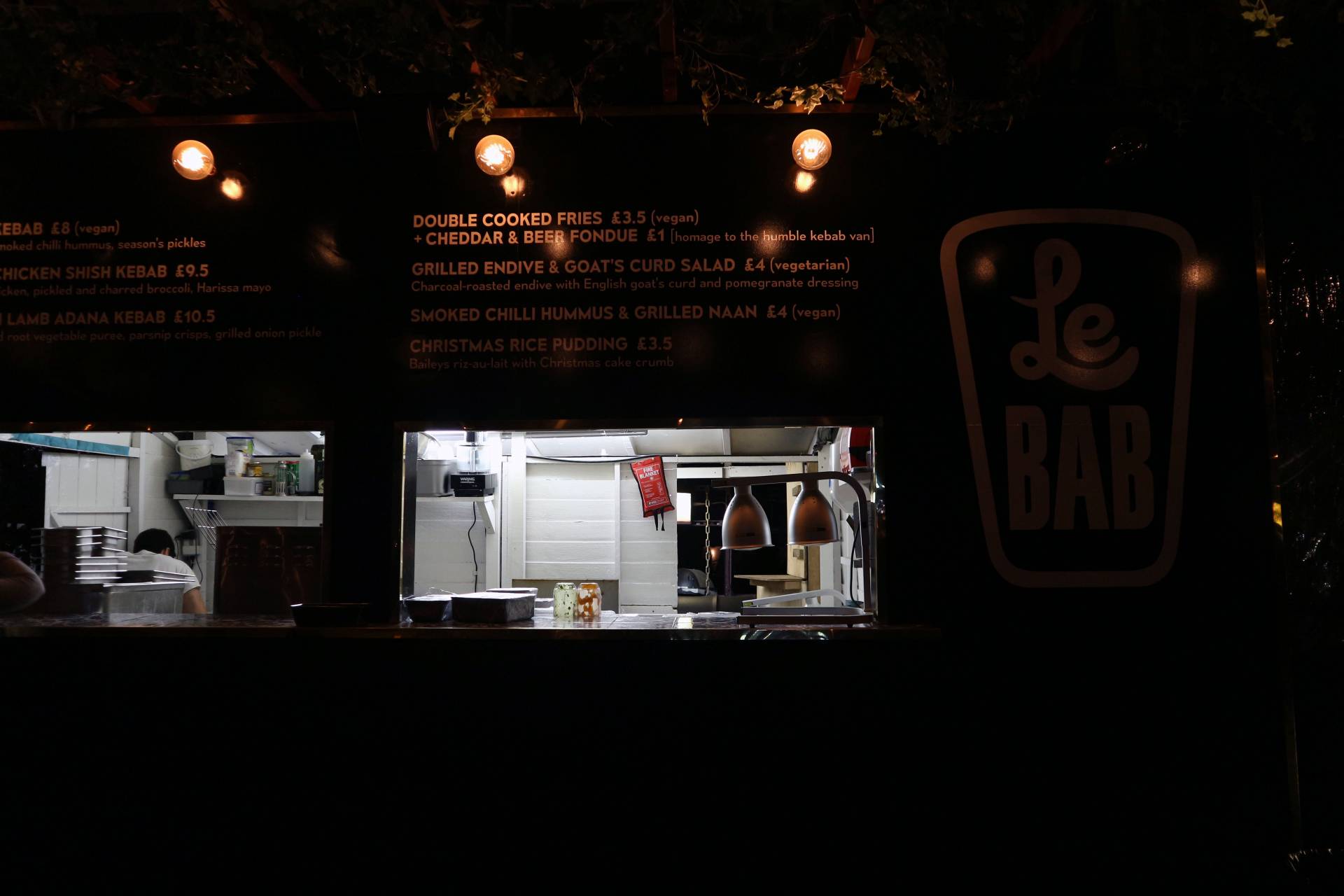 With full bellies & a few beers down, Jack & I remembered that we weren’t actually in a magical Scandi-forest, but on the other side of London on a school night so it was time to head home. 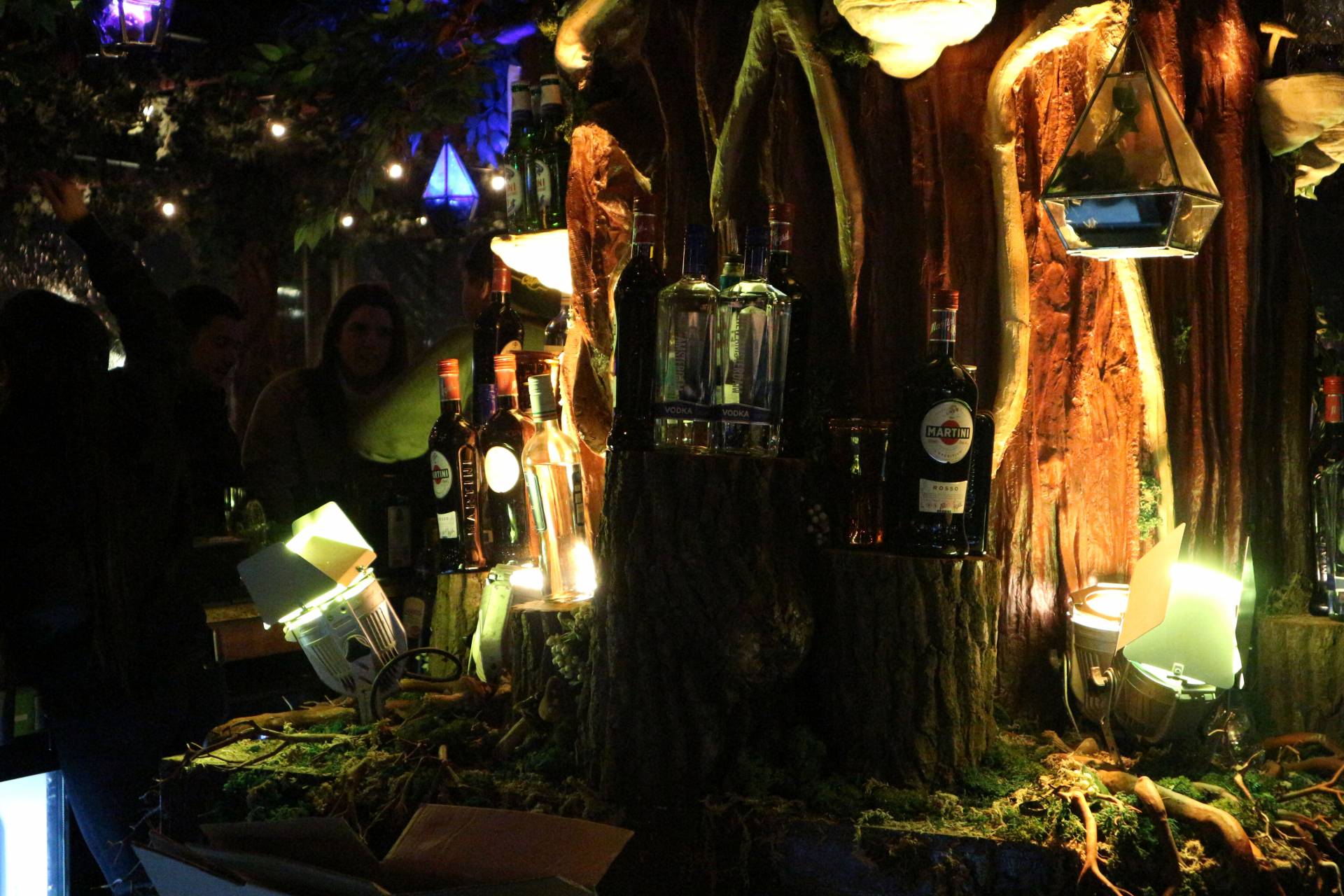 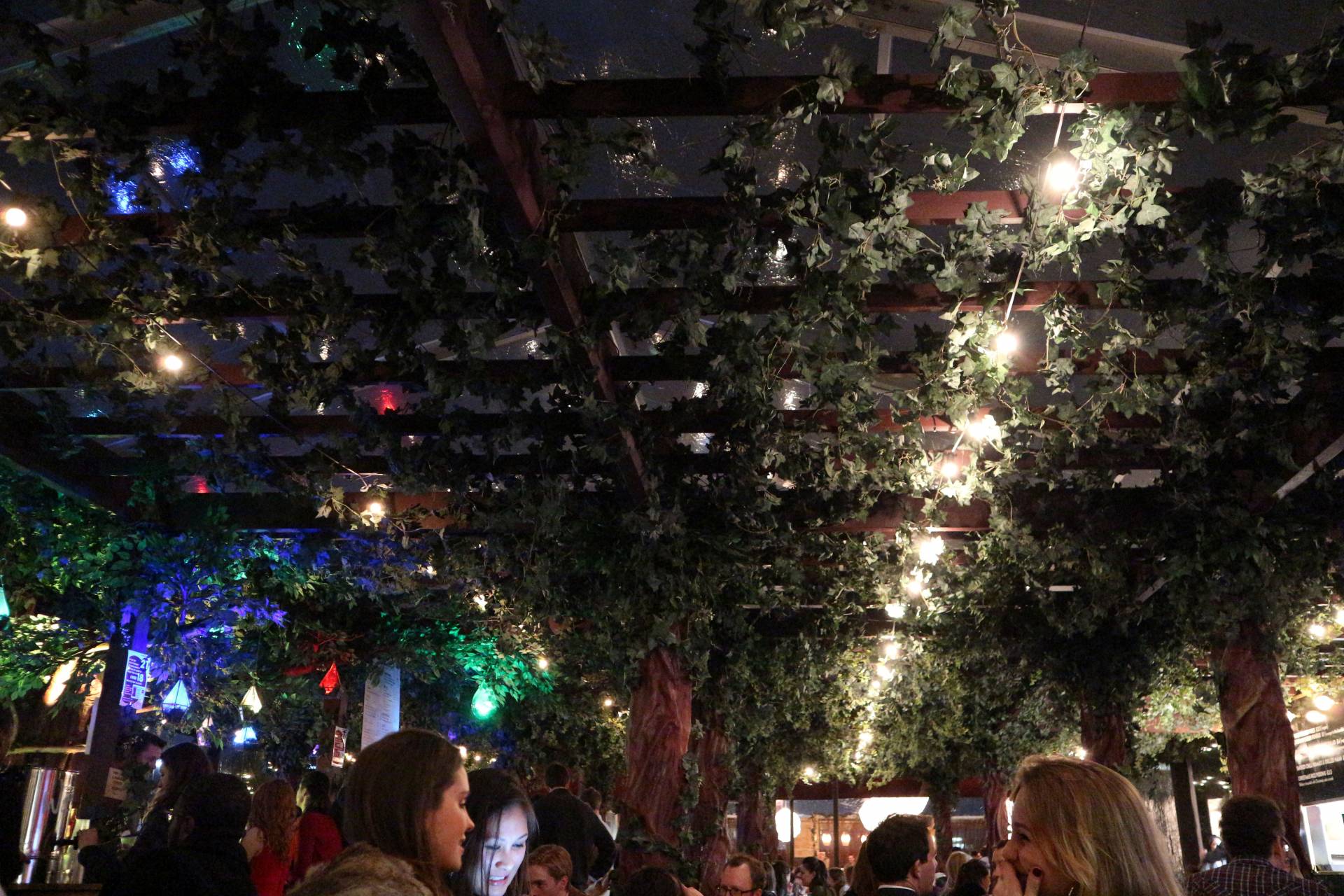 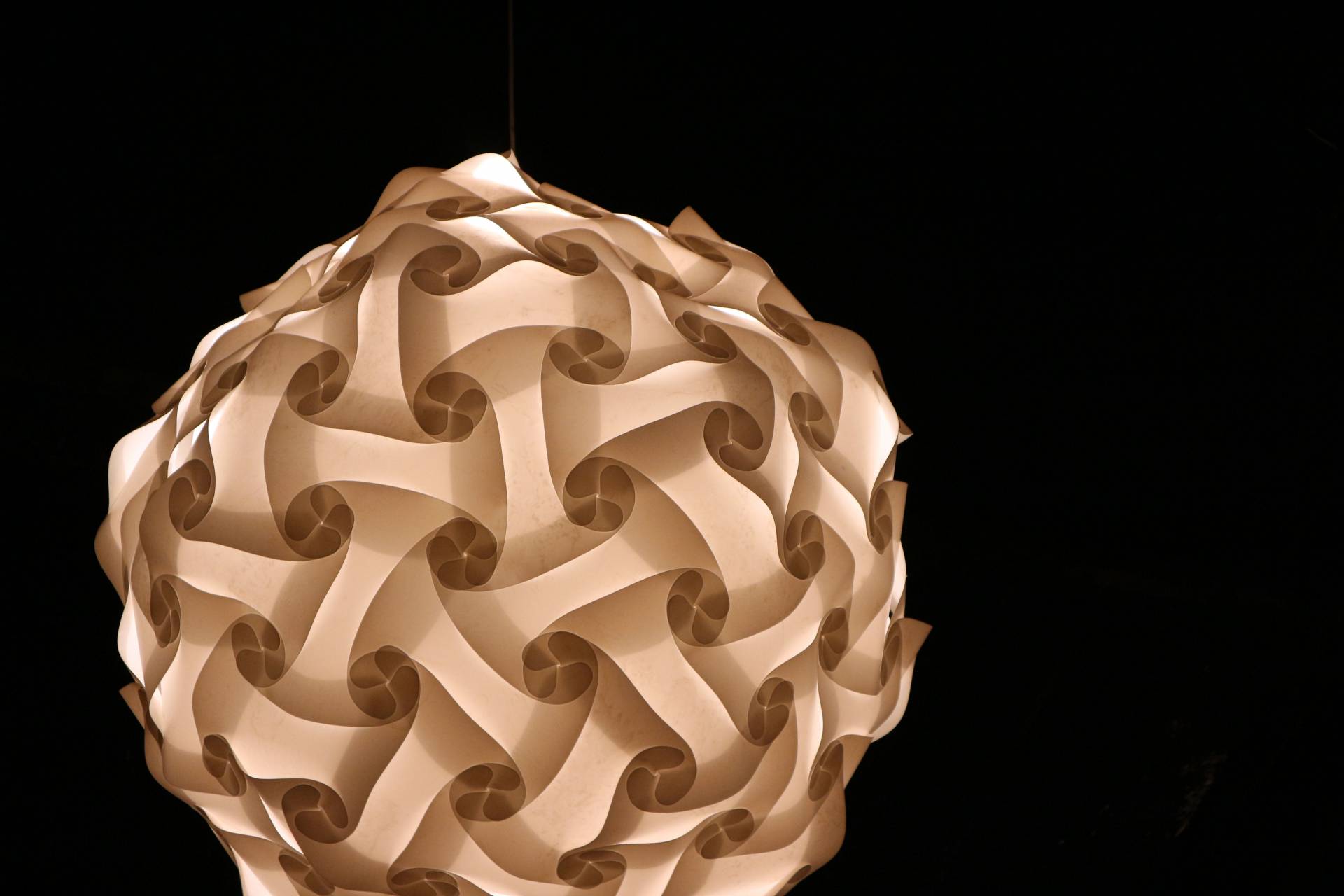 We had a lovely date night – and that’s not just the beers talking. Have you been up to Pergola on the Roof yet this December? If not, it’s open until Christmas Eve Eve (23rd December) so you’ve got plenty of time to get yourself booked in. Would you opt for a Burger, steamed bun, Kebab… or maybe all 3? 🙂

This post was written in collaboration with the Television Centre, but as per usual all enthusiasm about Burgers and Burger wrappers is 100% my own and honest!