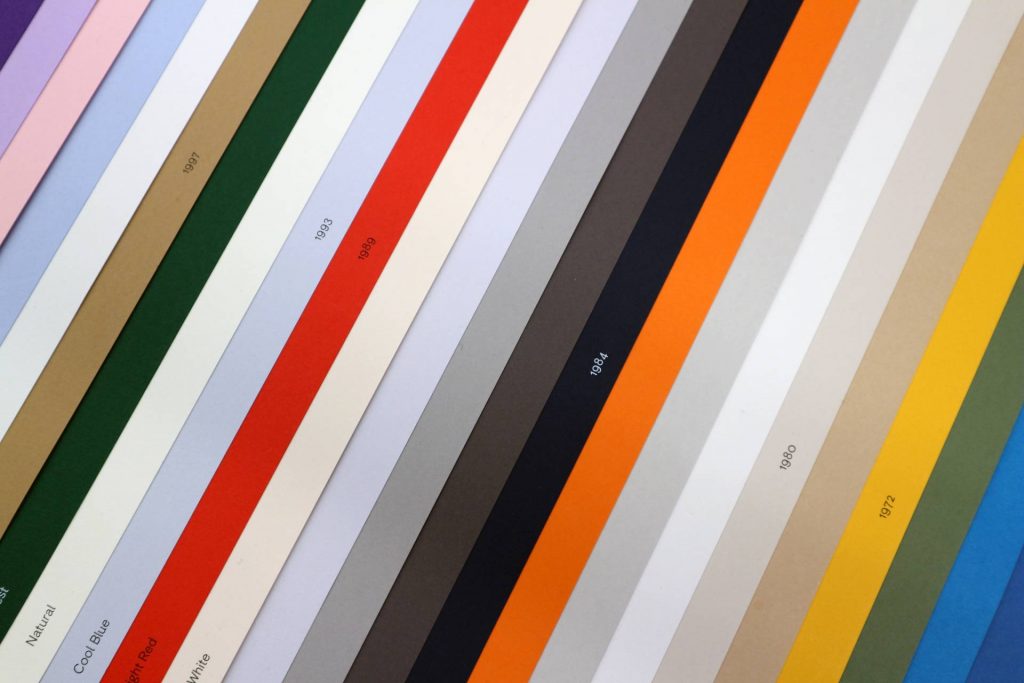 As a Graphic Designer, one of the perks is that I get to geek out about weird things like Pantone chips, fonts and paper and kinda get away with it. I mean, a lot of people don’t really get it but in December I discovered a place where I can ‘ooh’ and ‘ahh’ without judgement. Paper geeks rejoice; GF Smith have opened a show space in London! (It’s just off Oxford Street btw.) 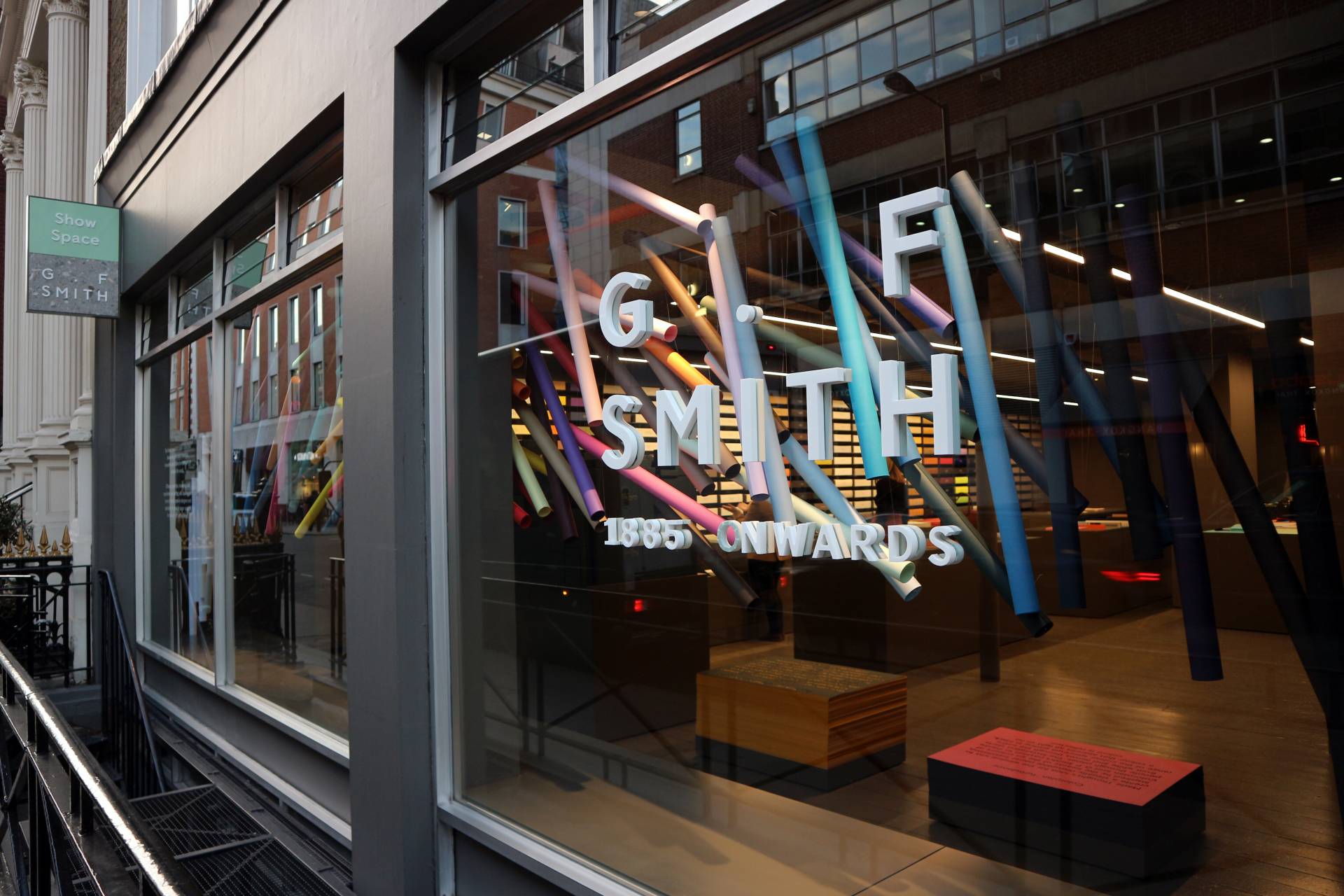 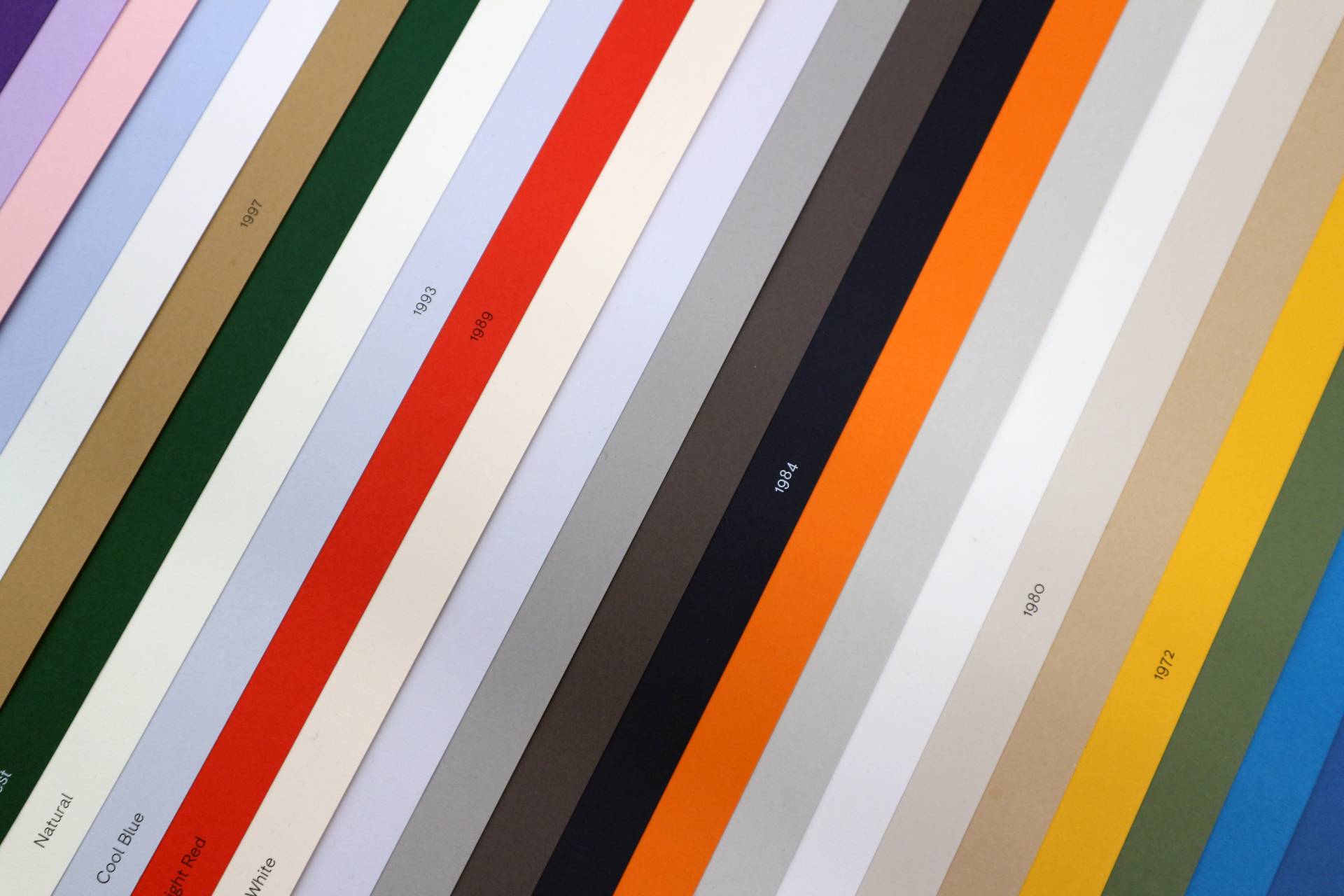 Paper. It’s like a basic everyday thing, right? But how different would your life be without it? Handwritten notes? Nope. Posters on buses and billboards? Nope. Box for your cereal? Nope. I know that most people think that print is dead (for the record:it’s definitely not), but paper is more important than you realise.

If I wanted to use a cheesy pop culture metaphor, I’d definitely go with: You could say that GF Smith are the Justin Timberlake of the paper world – they’re bringing sexy back. Their ever expanding collection of paper stocks teamed with slick branding by Made Thought and a NEW innovative interactive paper experience – geeking out is totally justified. (Who remembers that JT album from 12 years btw?)

With design it’s ALL in the detailing, and from the guestbook and the ‘weather wall’… 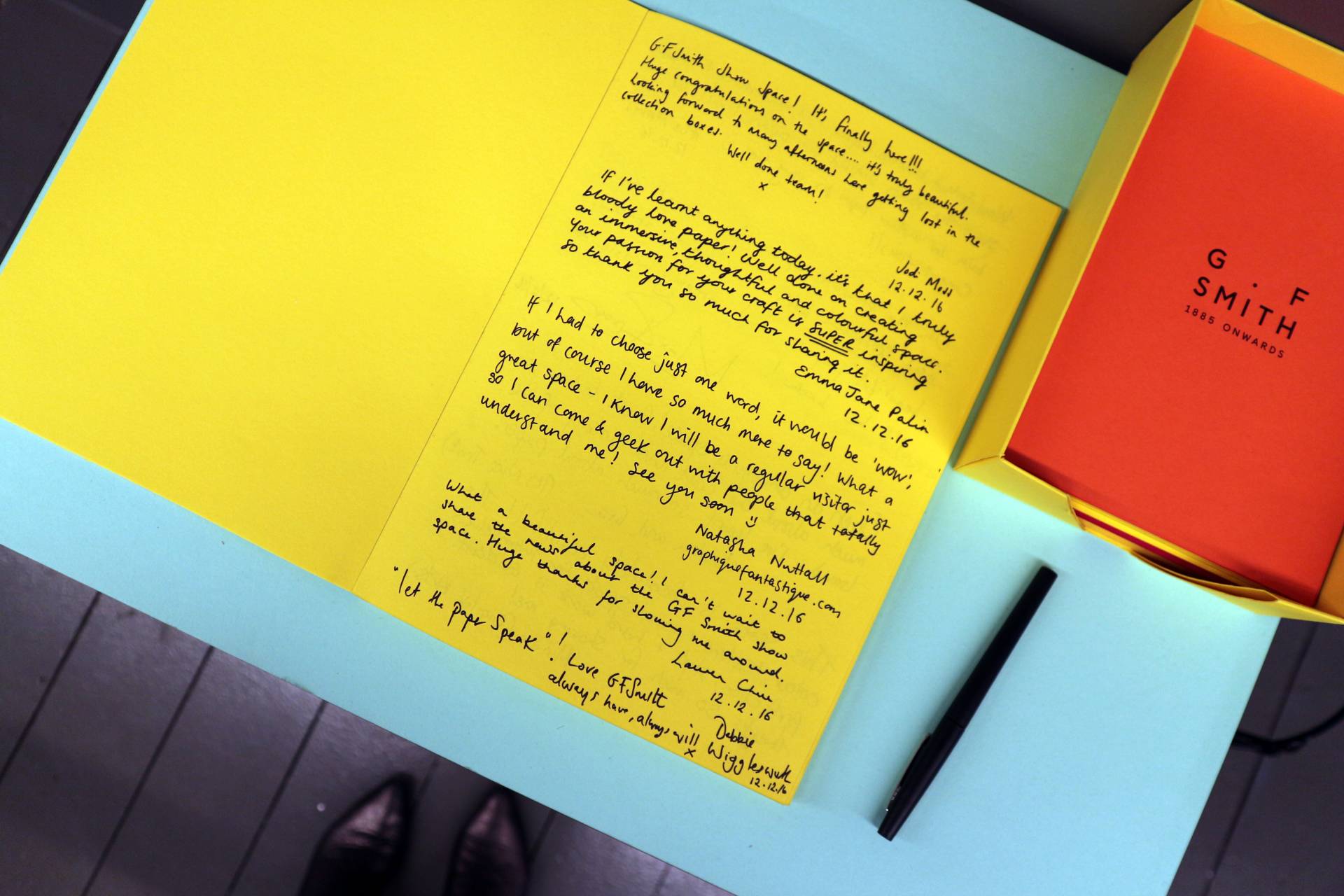 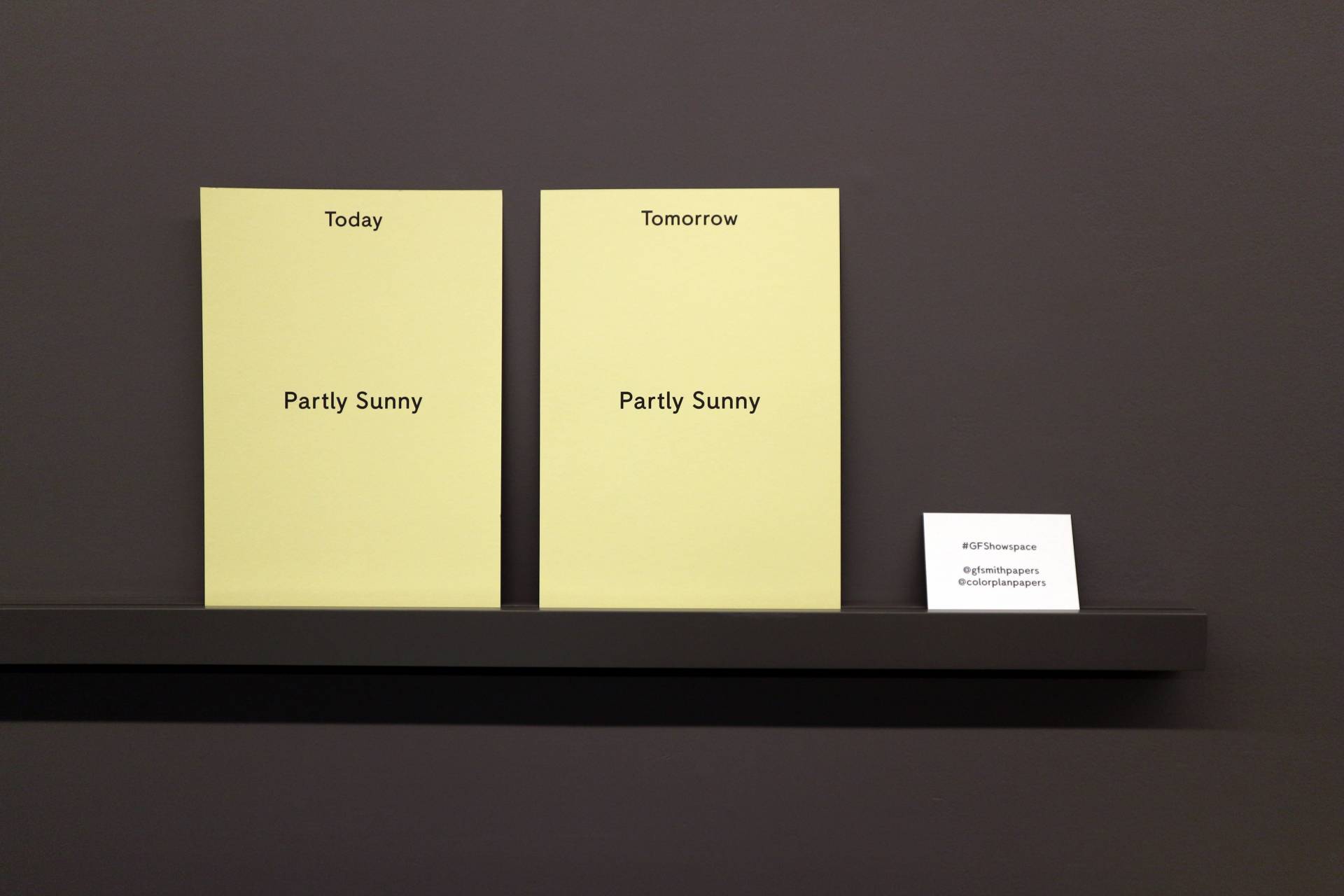 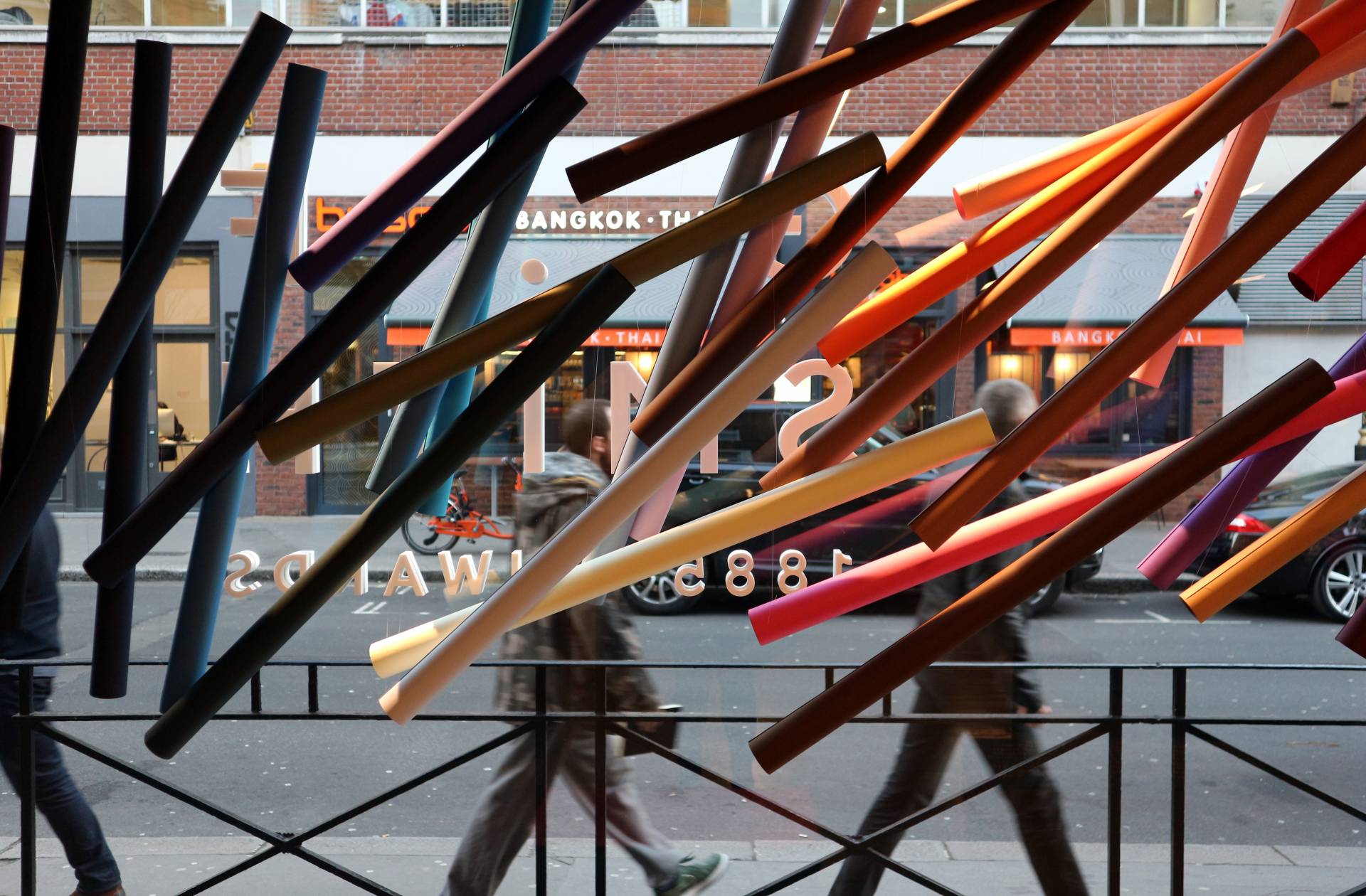 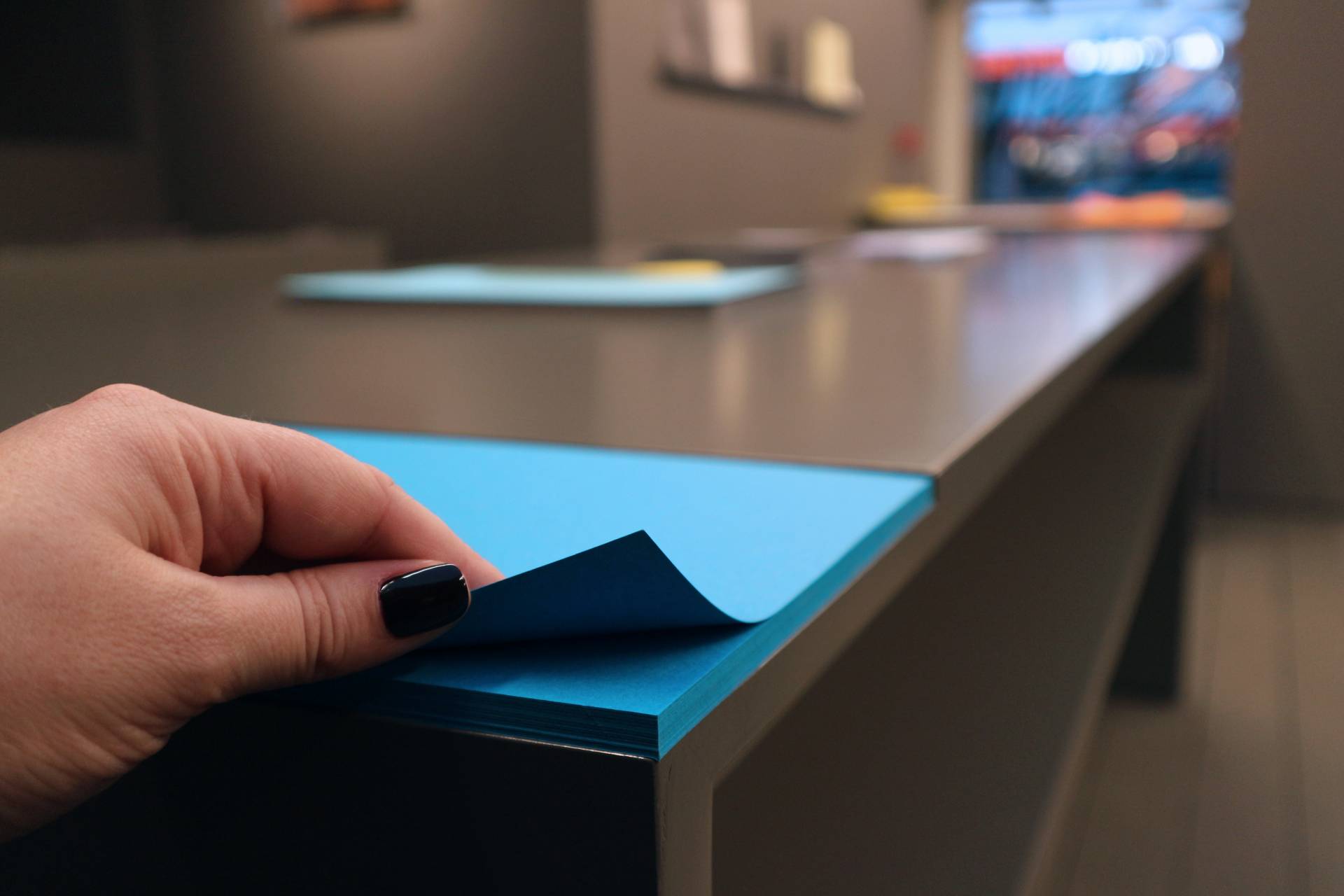 … to the window display and meeting tables complete with paper corners – they have thought about everything and MORE. You can even watch a little behind the scenes video here.

The space not only displays the full GF Smith range, from Colorplan to Make Books and Make Frame, but tells a story; how the brand was created and can be used. Wanna educate yourself on the paper making process? You can. Want to look at 3 white paper stocks side by side? You can. Everything about the space is cool, angular (like a paper fold) and modern… 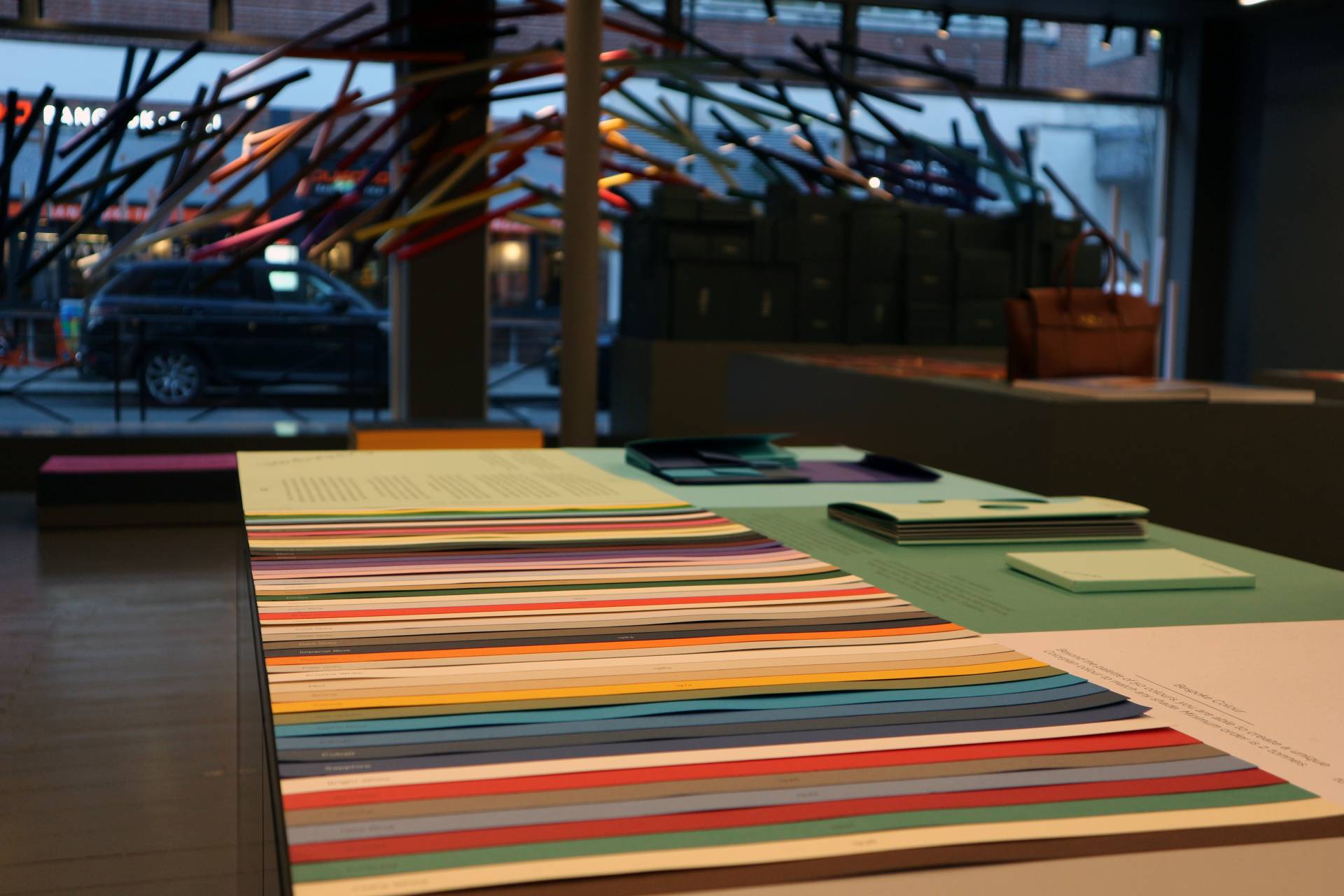 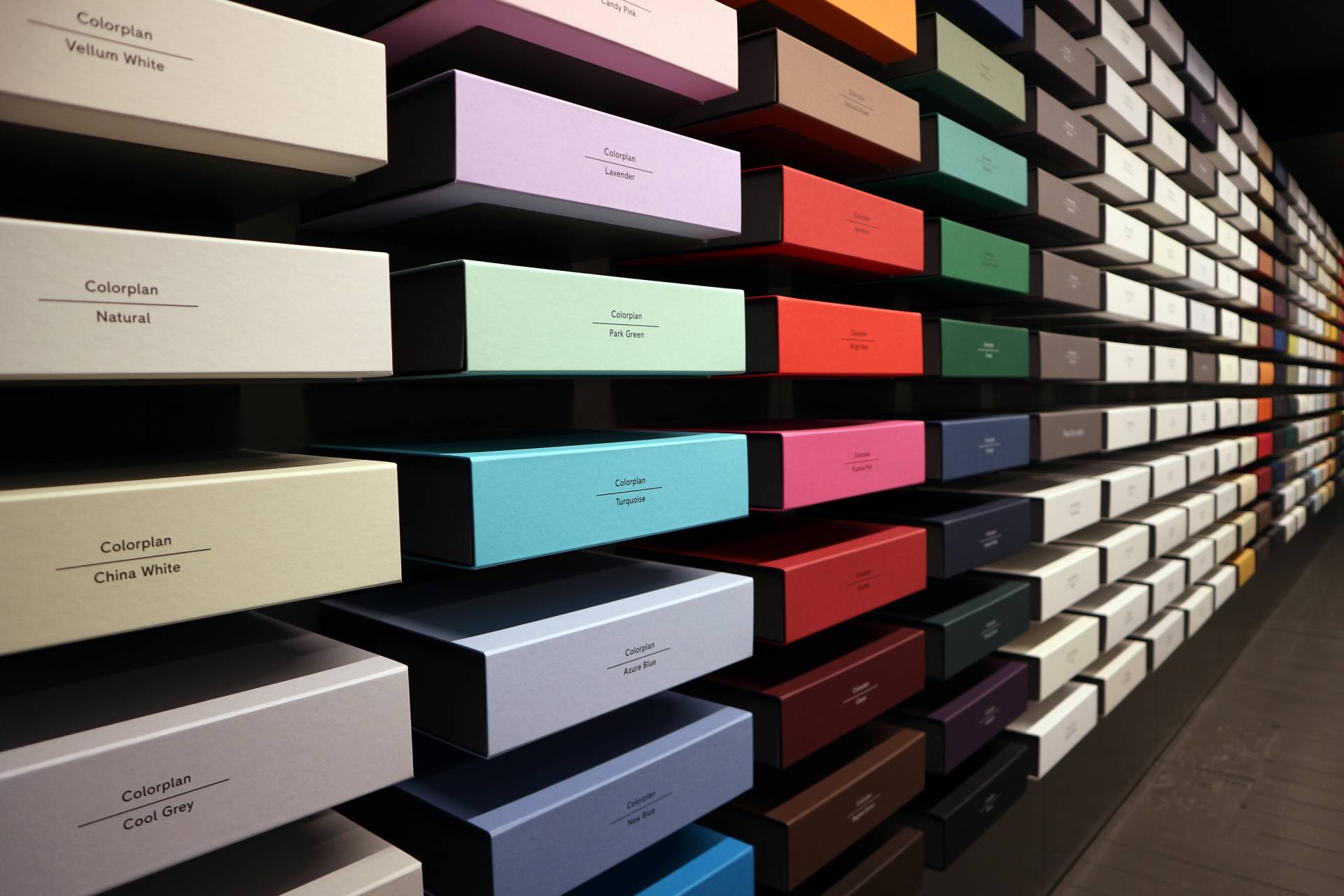 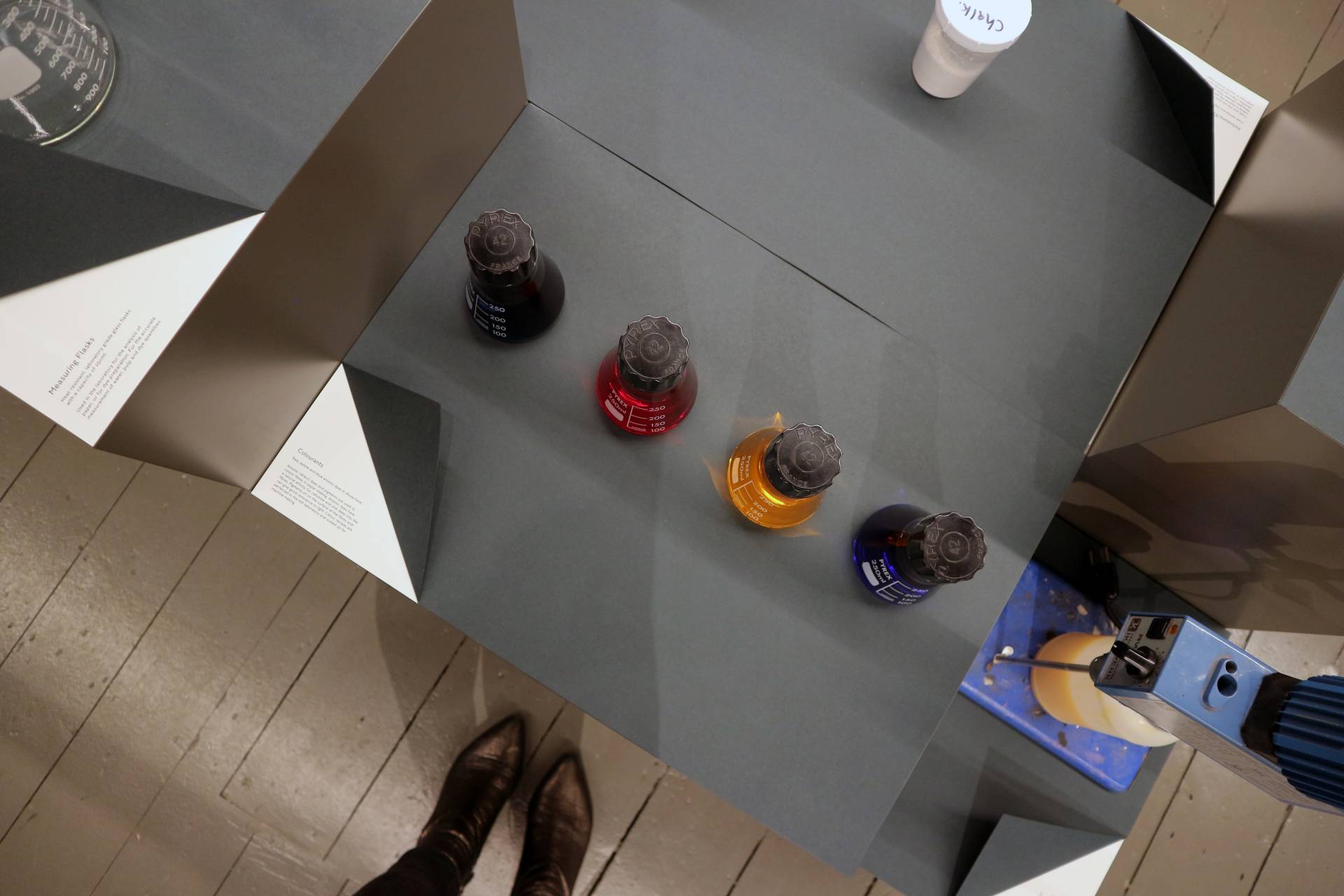 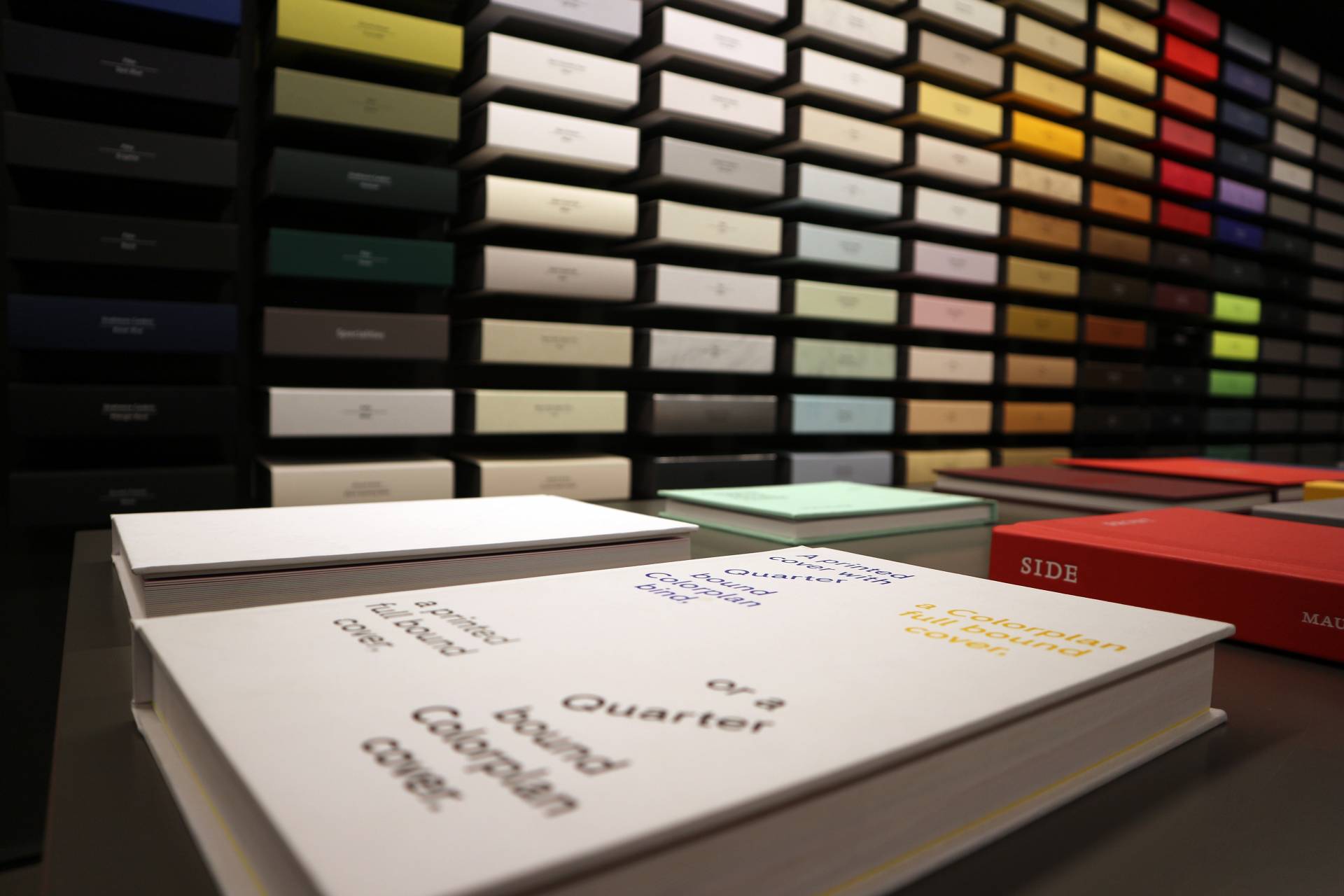 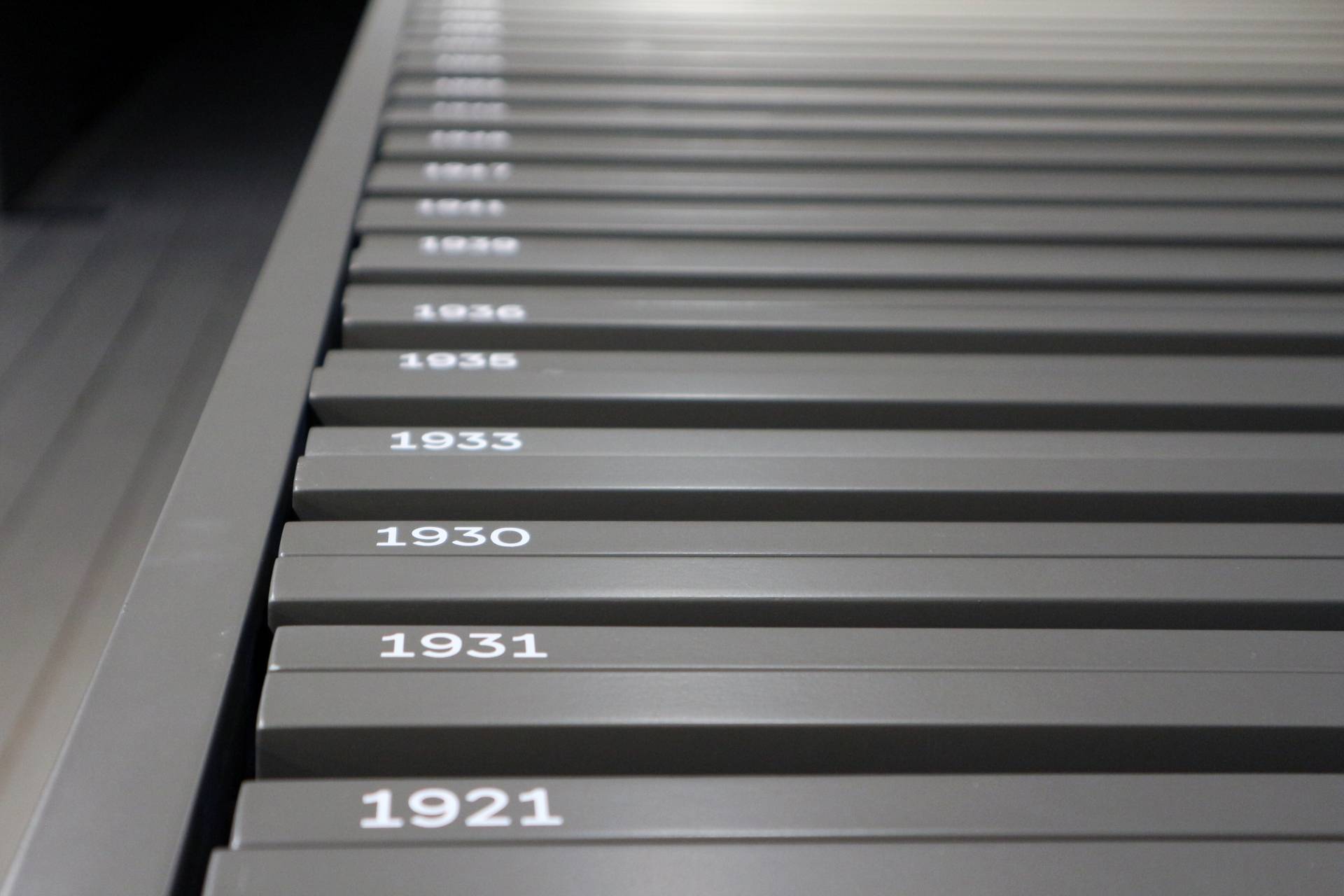 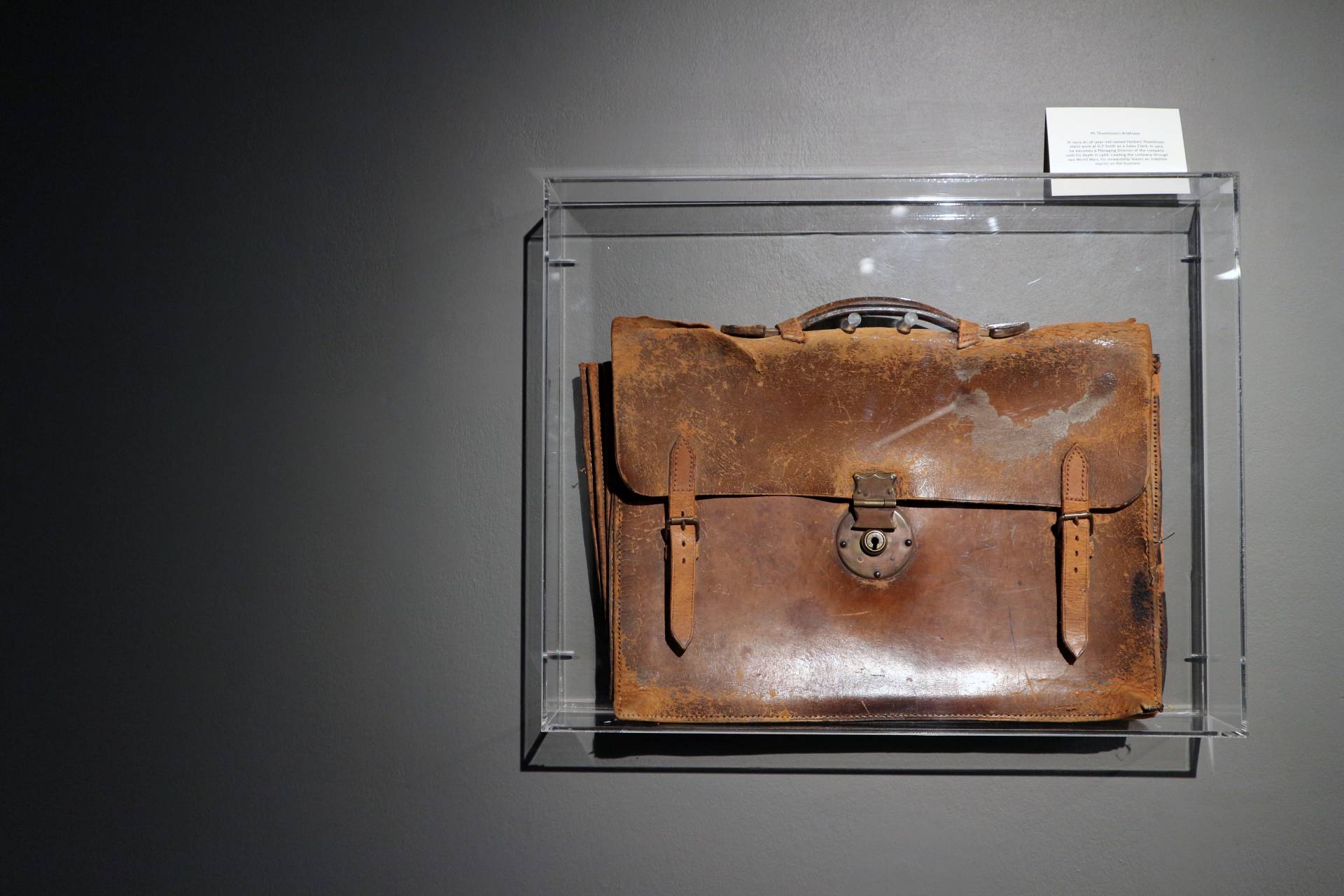 … contrasted with tradition and an archive of GF Smith history, and as they were established back in 1885 they’ve got plenty to share. And you might wonder why there’s a battered old briefcase displayed on the wall? But this isn’t just any old briefcase – it’s Mr Tomlinson’s briefcase. Joining GF Smith as a sales clerk in 1905, Tomlinson went on to become managing director in 1915 until his death in 1968, leading the company through two World Wars! If only this briefcase could talk – I’m sure it’d have some stories to tell. 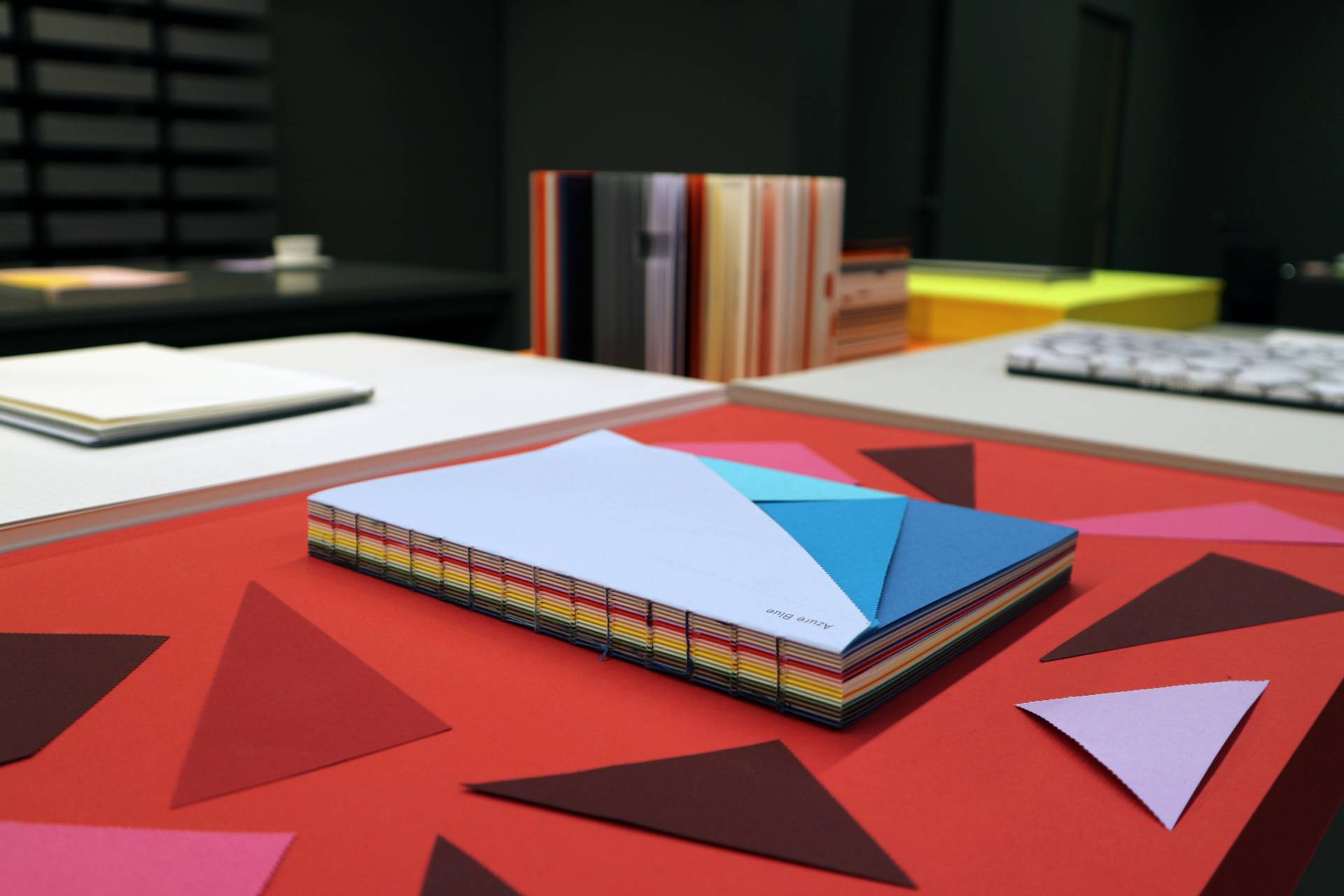 But anyway, back to the paper: if you need to touch or sniff paper (what did I say – no judgement!), this is the place for you. The paper consultants are on hand to talk through your paper needs and find the perfect weight, colour, texture for your project. Whether you’re printing a poster or packaging a Mulberry bag – there’s a paper solution waiting for you. And that’s not all… 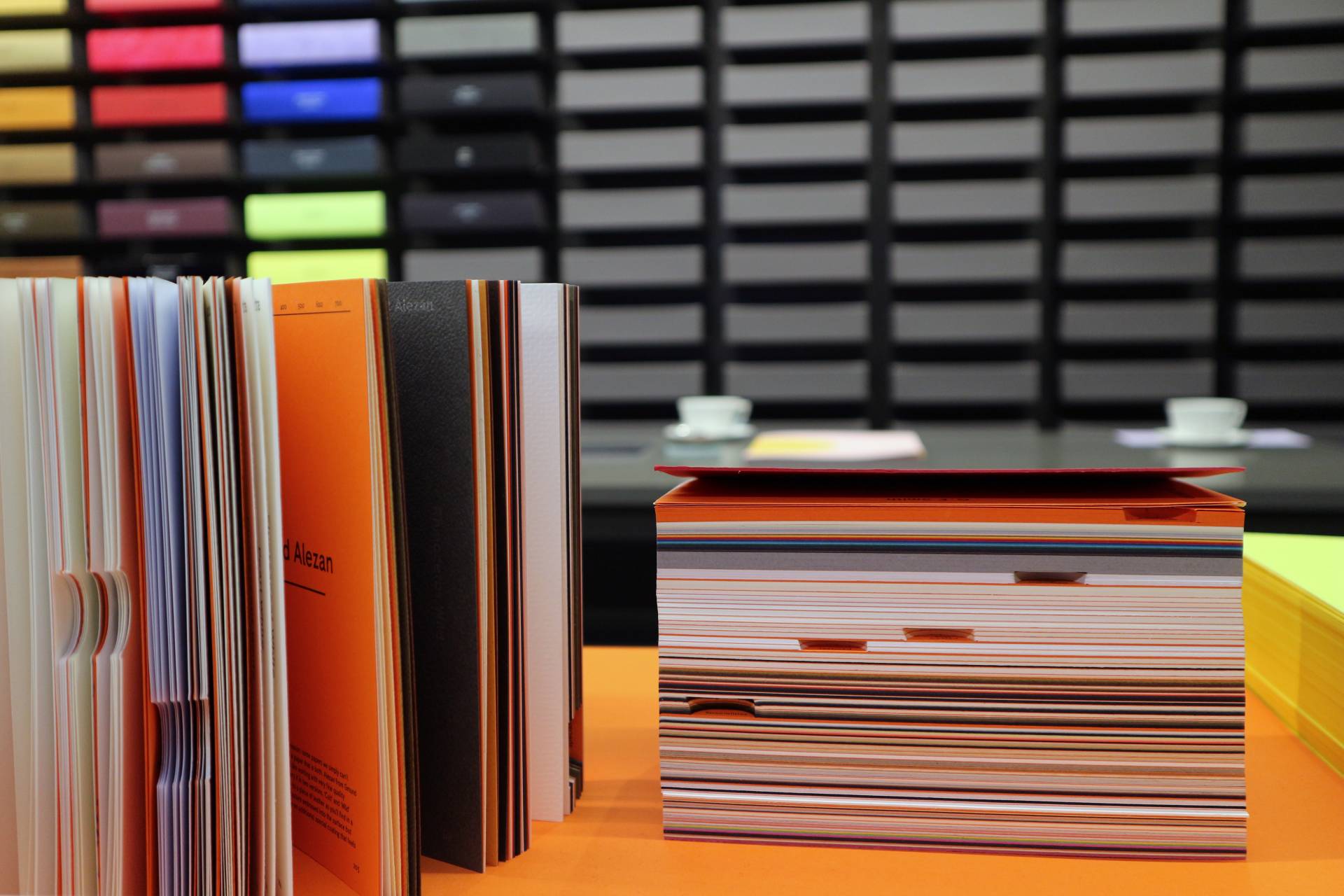 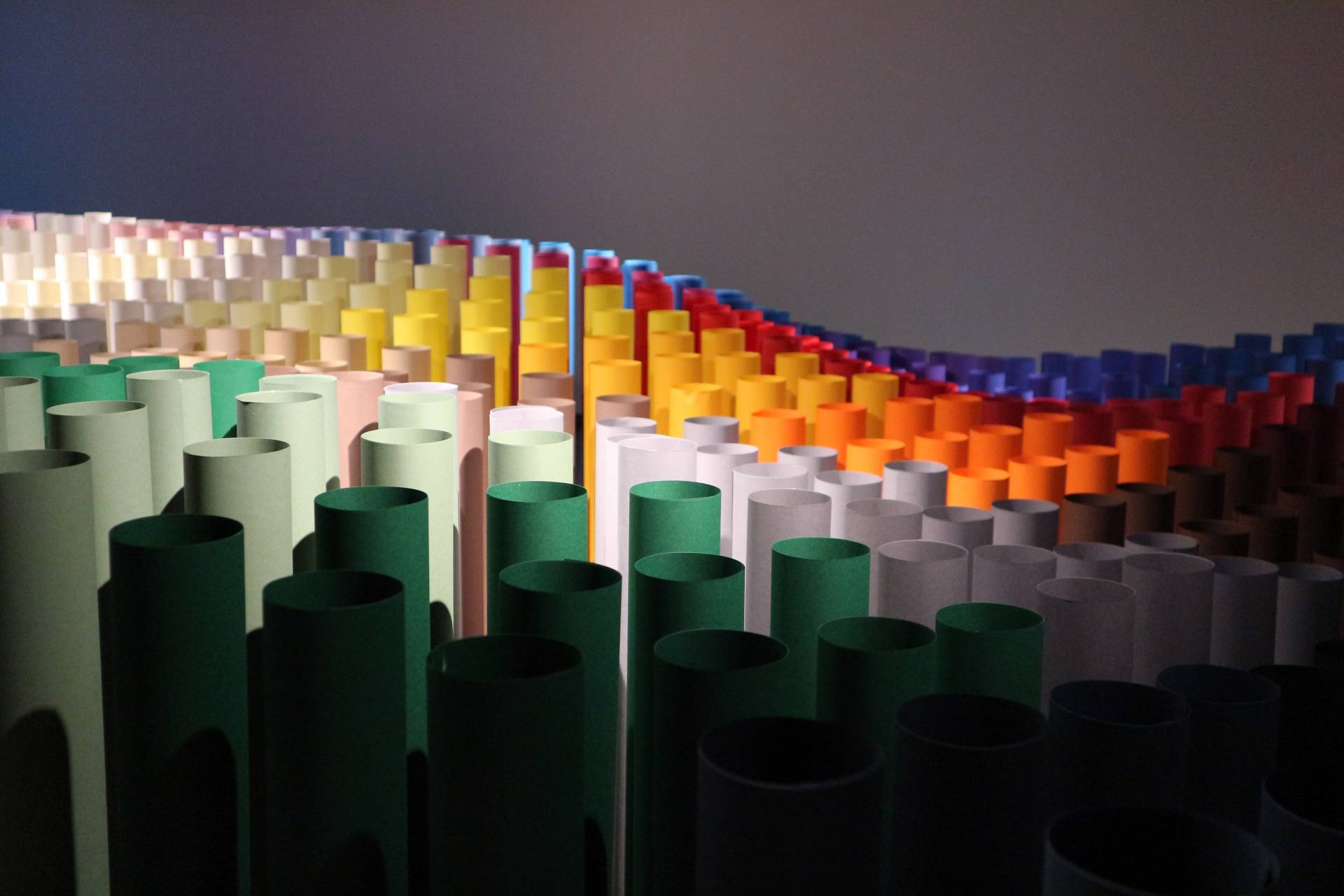 So usually it’d be a bit rude to just wander downstairs in someone’s house, but when there’s an exhibition/ gallery space it’d be rude NOT to wander downstairs. At the moment the space is home to ‘Tidal’ which as you can see from the photos is an awesome, colourful wave made from rolls of paper, but rumour has it that this will change soon so make sure you get booked in to see it in real life. (Visits to the Show Space are by appointment at the moment btw!) 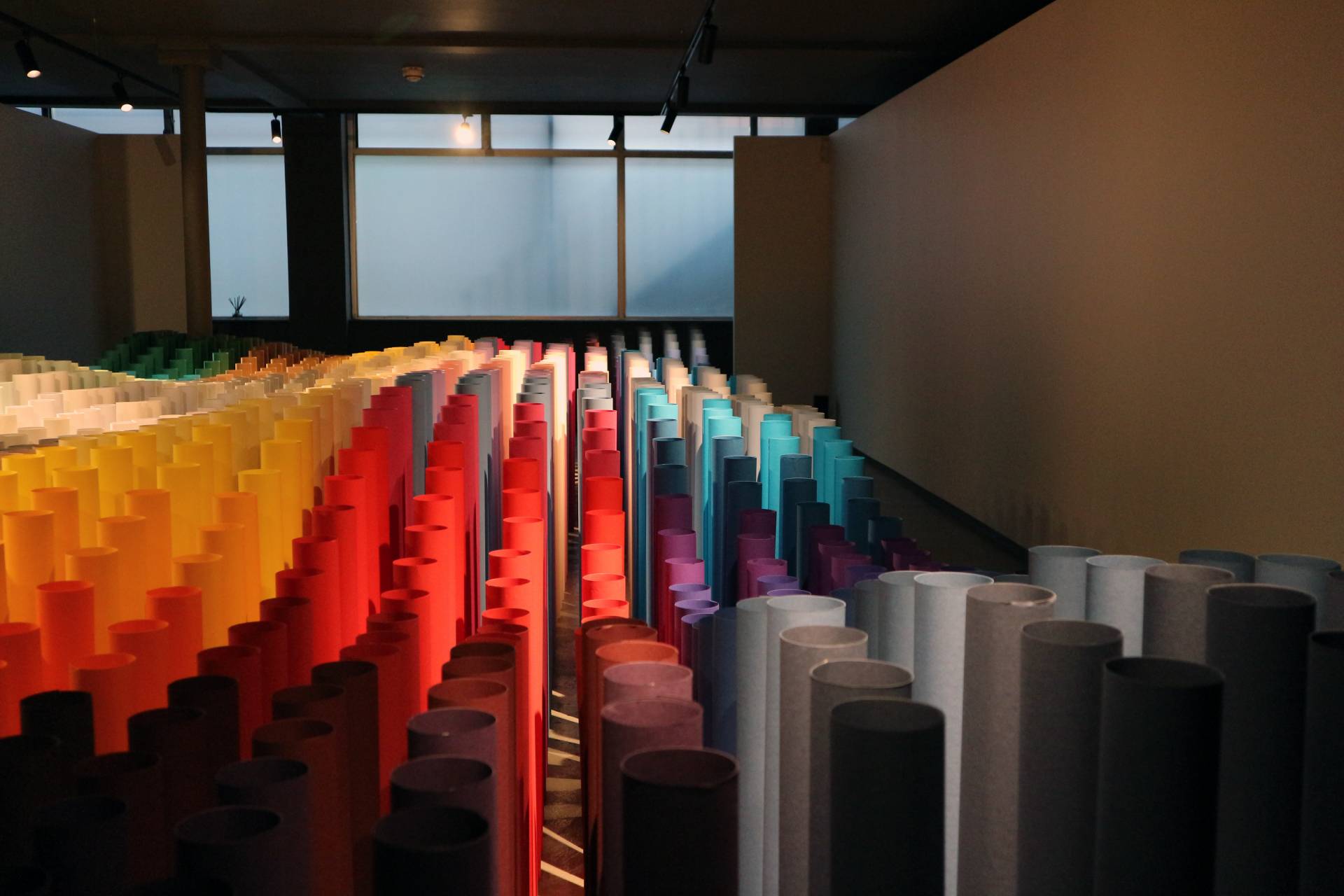 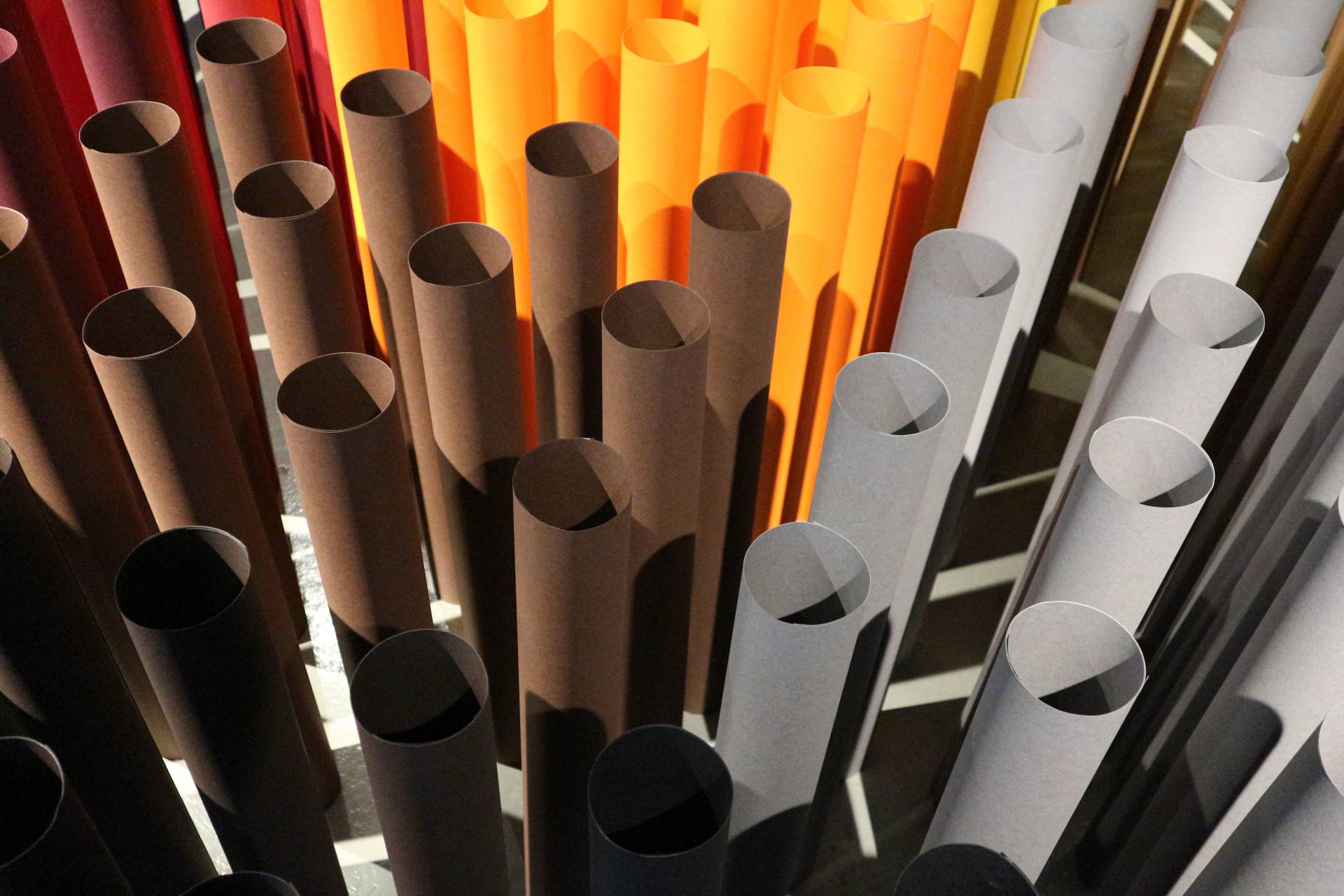 The space will regularly evolve and adapt to be used for exhibitions, events and possibly maybe workshops, so keep an eye out for the latest paper activity.

And the fun doesn’t stop there! GF Smith have recently embarked on a mission to find the World’s Favourite Colour – something that everyone can get involved with. I first heard about it at the Pantone Colour of the Year reveal – did you know that there’s more to our colour preferences than meets the eye? Apparently Blue is the expert’s choice to come out on top; dating back from our days as hunter-gatherer types, blue is seen as a rare and precious colour which doesn’t often appear in nature (flowers, foods, animals etc). Also, it’s really hard to print – am I right designer friends? Dunno if you can tell but I’m totally geeking out on colour right now ha 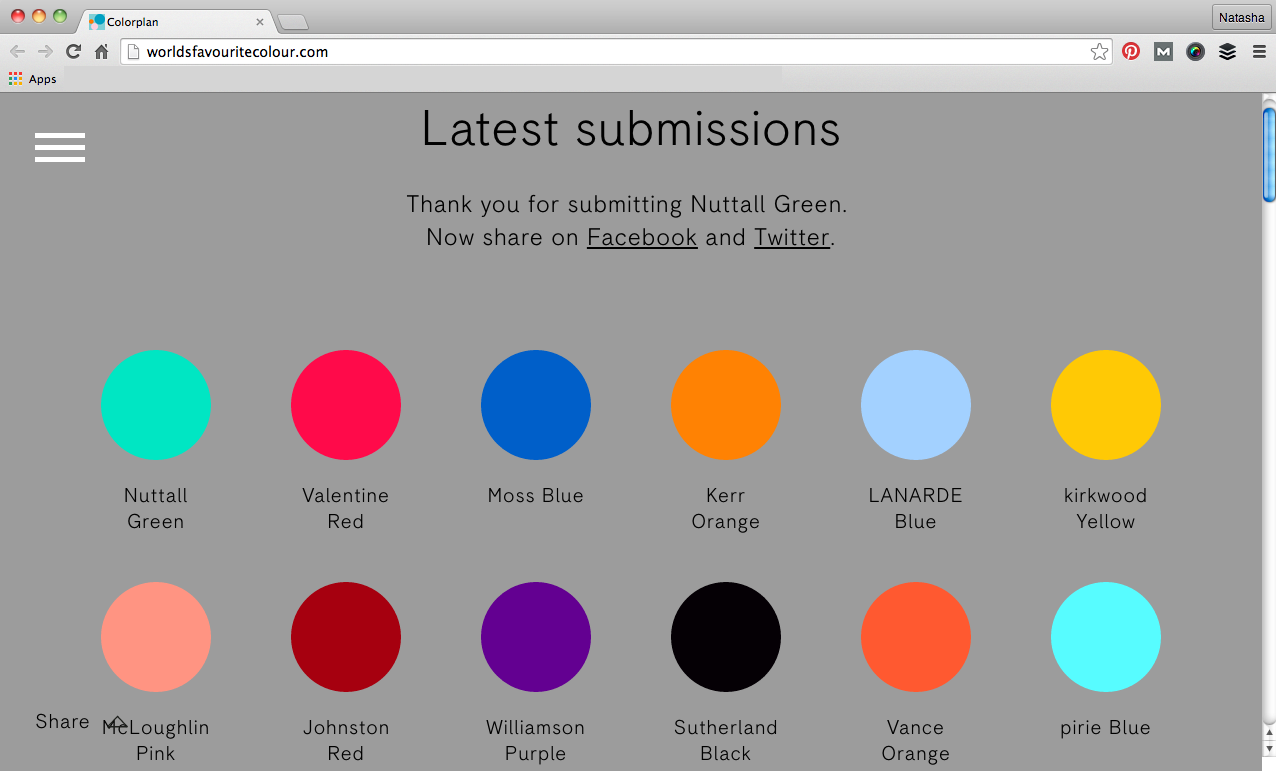 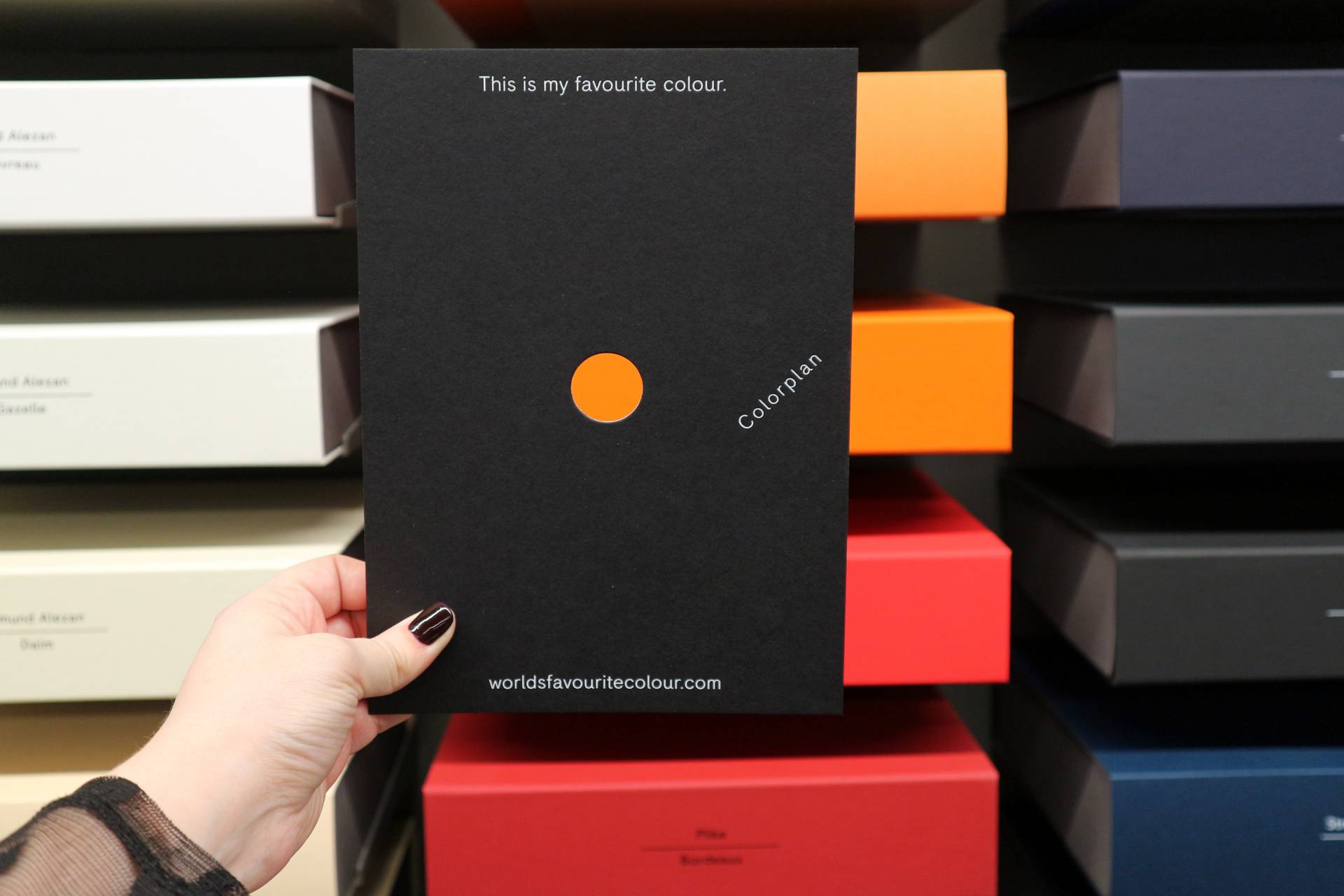 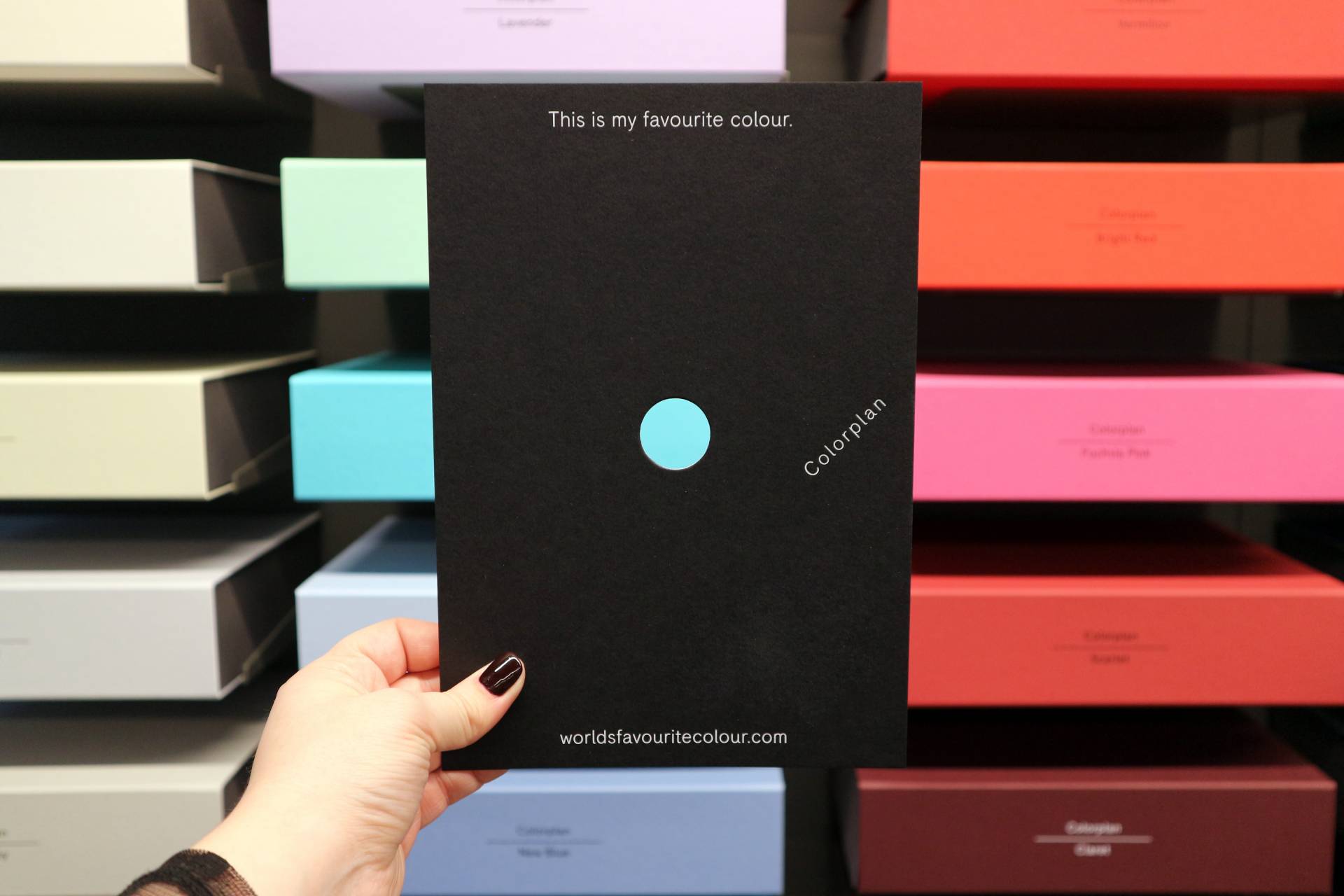 Anyway, you should definitely get involved with the campaign and contribute your own favourite hue: are you an orange or a blue? I submitted my fave bluey-greeny bright teal shade which GF Smith named/ should affectionately be known from now on as ‘Nuttall Green‘.

Let me know your thoughts on paper – do you understand my geeky feelings? I know I’m not alone! Also don’t forget to let me know which you choose to submit as your favourite colour! (not like I influenced Vincent Connare, the creator of Comic Sans, to submit his or anything…)