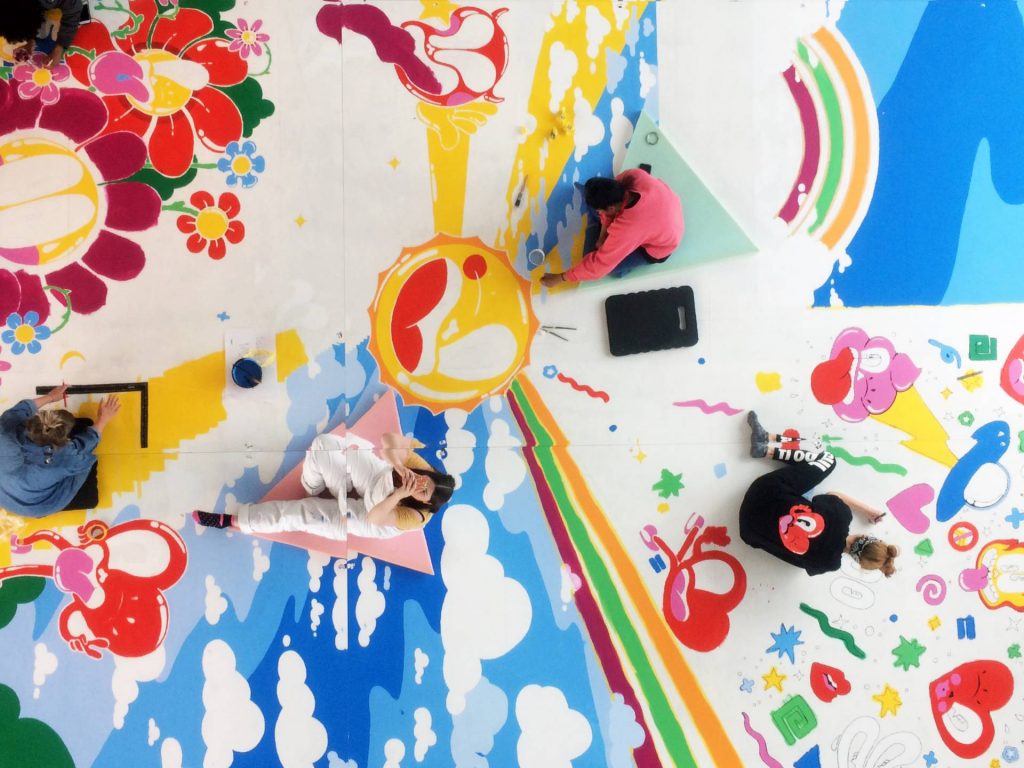 May has been quite a crazy month for me so far (and there’s still a week left!) but I love to keep busy so it suits me! If you follow me on Instagram you might’ve seen that I’ve been painting with Hattie Stewart for her installation at NOW Gallery in North Greenwich.

When Hattie posted a call out for painters on Instagram I applied without really thinking about it – I definitely didn’t think I’d get picked but I kept my fingers crossed! A few weeks later, I put on a new white pair of overalls and headed to North Greenwich excited (and a bit nervous) to join the team for painting…

So, what were we painting? Well it’s basically a giant canvas on the floor, but that’s not it! There’s a mirror suspended above so that you can lay down and look up at the whole piece. I took a few snaps through out the 3 day painting job so thought I’d share a little peek behind the scenes… At the end of the first day there seemed to be a lot of white space left – eek! I had spent the day painting white (clouds, eyes etc) and I joked with the guys that I’d been laying around all day just pretending to paint. Actually I was pretty keen to get stuck in with some colour AND get my first splodge of colour on my new overalls, so on day 2 I picked up the blue… 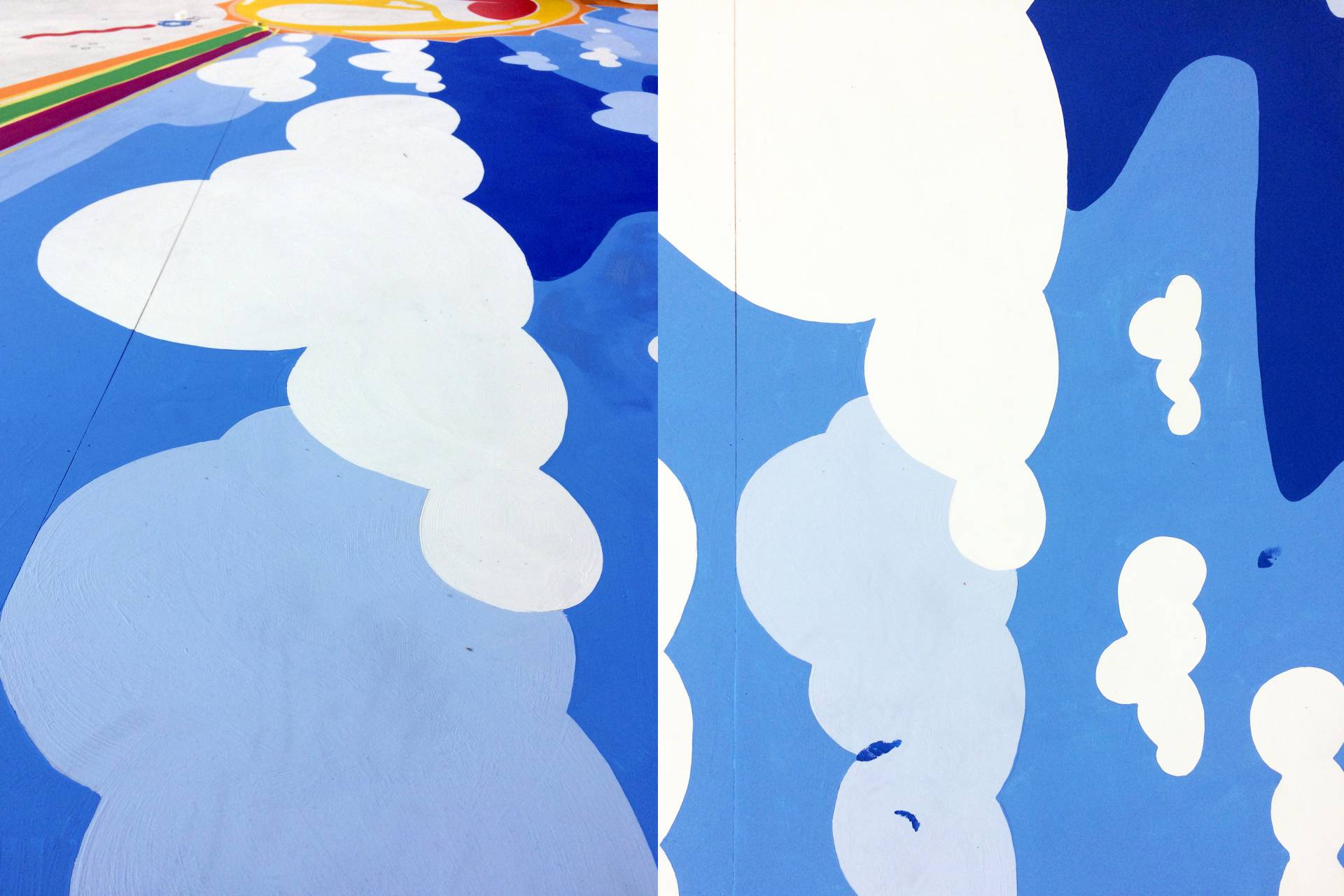 … but unfortunately my sock picked up blue too! Sigh. Luckily for me it wasn’t anything that a bit of paint to couldn’t fix to get the sky back on track. I was really honoured to be on a team with such talented creatives – let me tell you a bit more about the team: starting with chief painter, Charlie Oscar Patterson. Charlie is a master of masking tape – check out his handiwork on the brick wall! Charlie was kinda outnumbered because for the rest of the team, it was girl power: talented creatives Kay Davis and Jasmin Sehra (who I’d briefly met at an event the month before), florist Hana Moss and Project Manager/printmaker, Alice Hartley.

Let’s not forget the main lady, Hattie Stewart. Hattie’s bold, colourful illustration style is pretty recognisable – especially her cheeky winking characters. You probably know her best for her doodle bomb magazine covers? And if not, where have you been!? This installation, entitled ‘I Don’t Have Time For This’, is designed to encourage people to take a moment to lay down and relax. I know that I’m guilty of forgetting to take a break because I think I have too much to do, but with Hattie’s piece at NOW Gallery there’s no excuse! Make time for some blue sky thinking, jet into space, dance on a rainbow or chill in the flowers – the choice is yours! On day 3 it was all hands on deck to get the flowers finished; this was one of the most complex sections and needed a steady hand to conquer the curves!

A few people asked me via Instagram if Hattie was actually painting with us as apparently it’s common for ‘big artists’ not to have a hand in their own installations (it’s not something I’ve experienced yet) but Hattie was very much a part of the painting team and a total babe! Things were starting to come together now and it was mainly the brick wall and black ‘space’ background that needed filling so Jasmin & I headed up into space. Painting the black background was actually pretty scary because we didn’t want to damage any of Hattie’s characters, eek! I think I forgot to breathe at some points because I was concentrating so hard ha BUT we did it! Phew! Watching it fill up as a solid colour was pretty satisfying and really started to bring it all together and made it feel less daunting. It didn’t take us as long as I thought it was going to either, which is a bonus.

Less than a week after we began painting, it was time for the big reveal at the Private View! It was really weird to see people walking all over something that I’d spent 3 days painting, but don’t worry because it had been varnished to avoid any smudging! But worrying aside, it was really cool to see people interacting with it – I love people watching (not in a creepy way ha).

On the night we enjoyed heart-shaped alcoholic lollies (Aperol Spritz, yum!), lots of selfies and some pretty inventive posing! Just look at those crisp lines – pretty impressive, hey? I know I’m biased, but I think we did a great job bringing Hattie’s illustration to life.

I’m used to painting larger, geometric shapes with rollers (for Morag Myerscough and my own wall) so this was slightly out of my comfort zone, but I’m so glad that I got the opportunity to challenge myself and conquer the curves. I even got my name on the wall to prove it 🙂

Hattie’s installation is at NOW Gallery in North Greenwich from 16th May to 25th June 2018 so plenty of time for you to pop in and snap yourself in the mirror. It’s completely FREE but it is a ticketed event (just to make sure everyone gets a good amount of time and space) so get yourself booked in via eventbrite here.

I had such a great time with the team; everyone was genuinely so lovely, chilled and talented. Fingers crossed I’ll get to work with them again in the future… more painting, please! It’s definitely made me hungry to paint more walls.