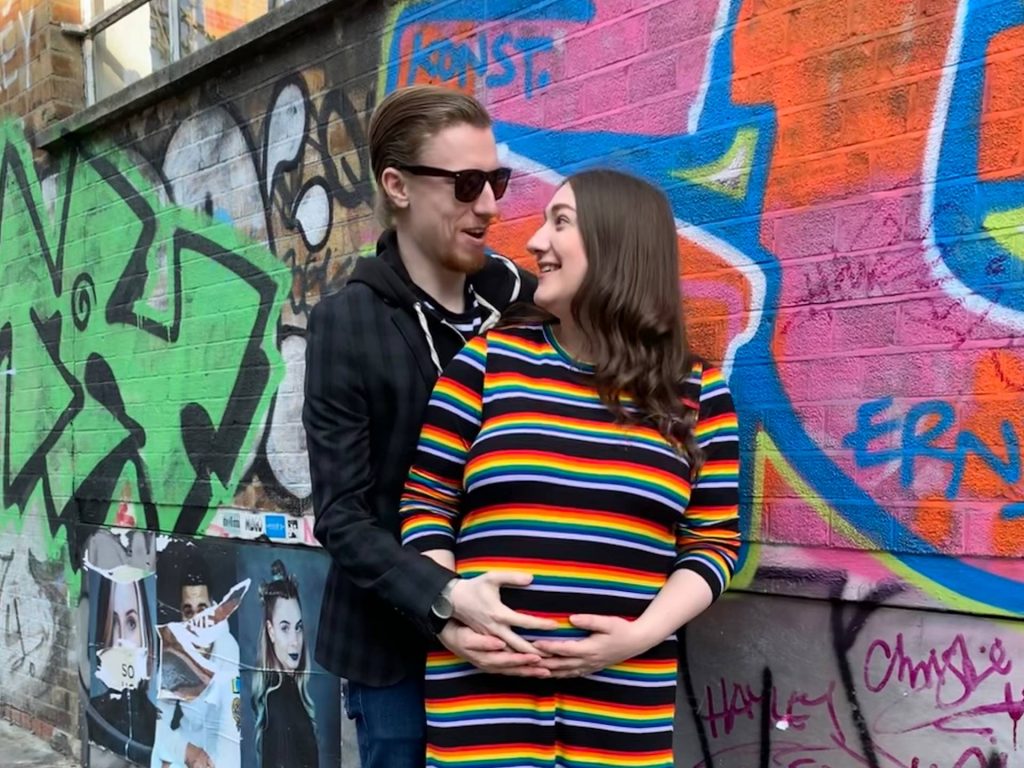 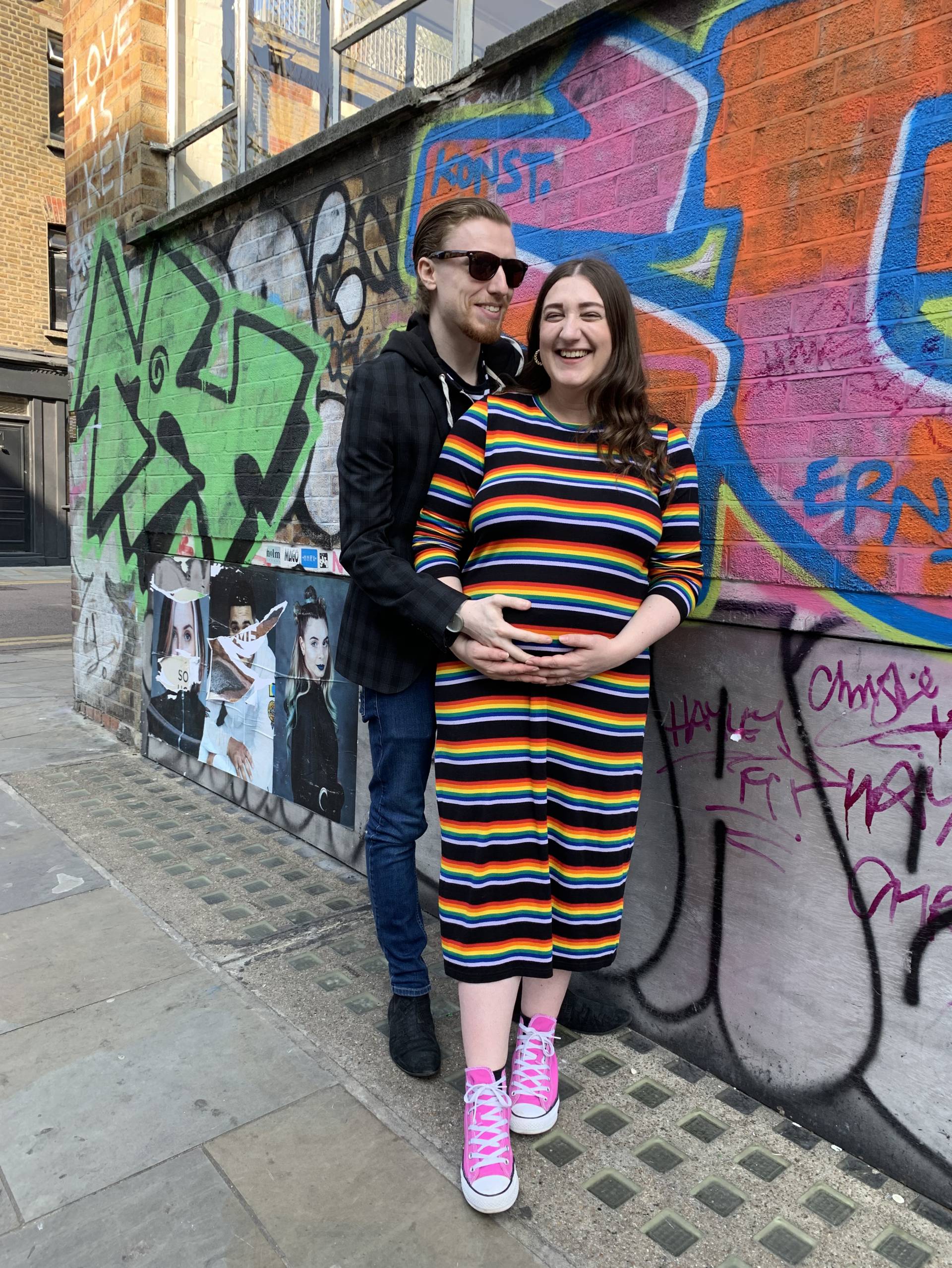 I know bloggers are supposed to be good with words, but I still haven’t really worked out how to eloquently say this so…erm, SURPRISE – I’m growing a human!

I hope you can excuse the 5 month blog silence because things have been quite busy around here, but I’m finally back in a good place and ready to tell you about my newest project: a mini-me. So here’s a little life update:

In October I felt the need for change: I go through these phases where I reflect on where I’m headed with my career/life and I wasn’t happy. I decided to leave the part time job that I’d had for 2 years which had given me a bit of stable income, being part of a team (freelancing can be lonely) and structure to my week. In the end the negatives really out-weighed the positives; the stress was making me ill and the job was holding me back from pushing myself as a freelancer, so I quit. I was so excited to ‘be free’ and hungry for a new project. (Well, I got one!)

Come November I wasn’t feeling too great – I was totally exhausted all the time no matter how much I slept. I thought it was just because I’d been working myself too hard and was coming down with the flu, but it was also around ‘that the time of the month’. When nothing happened for 2 weeks I put it down to stress, but after a chat with Emma she suggested I should probably take a pregnancy test. I was still expecting my period to show up, but I took the test just to rule out the possibility and got the biggest surprise of my life: it was positive, and I was speechless! I couldn’t even speak to tell Jack – I just handed the test to him. 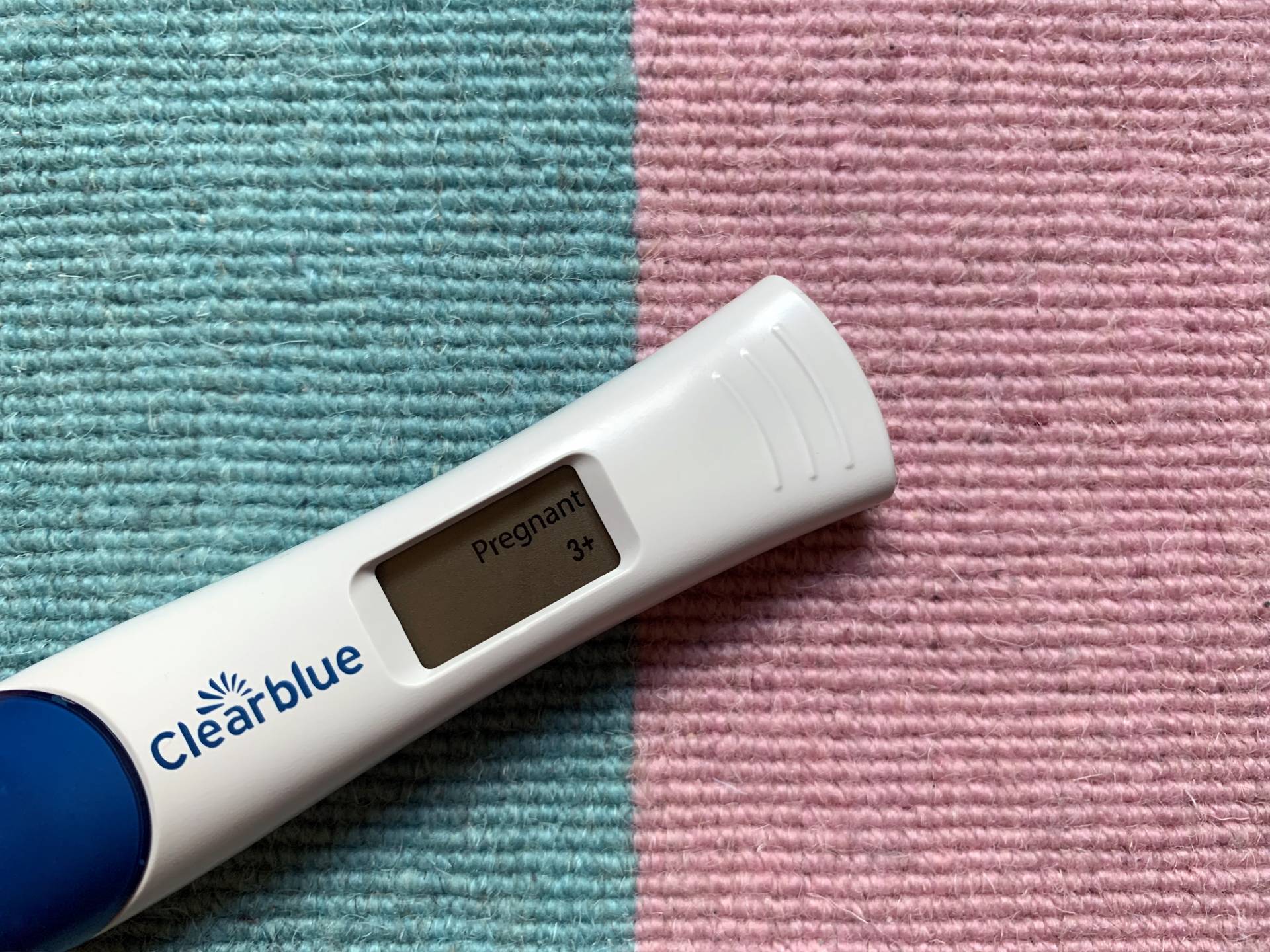 The next couple of hours are a bit of a blur. I remember Jack hugging me as I cried and saying that he would support my decision whatever I wanted to do (isn’t he a total babe?). 1000 questions and thoughts raced through my mind:
– How does Jack feel about this baby?
– Our whole life will change.
– Can we afford to have a baby?
– Can I work on my freelance career and have a baby?
– I don’t know ANYTHING about babies!
– This was NOT part of my 2019 plan!
– Can we make having a baby work right now?
– Are we ready to have a baby?
– Are we ever going to be ready to have a baby?

It didn’t feel real! Even though I was completely in shock and an emotional wreck, it didn’t cross my mind at all that we would get rid of the baby. There were a few things that I knew for certain:
– We loved each other 110%
– We’d been together 8 years and was in a good place relationship-wise (we got engaged in July)
– We had always talked about having a family
– We had recently discussed the idea of a baby
– I wasn’t getting any younger (I’m 29)
– Babies are expensive
– Babies are scary
– There was never going to be a ‘perfect time’ to have a baby
– Everything was going to change

It definitely wasn’t like the pregnancy test adverts – I wasn’t jumping for joy! 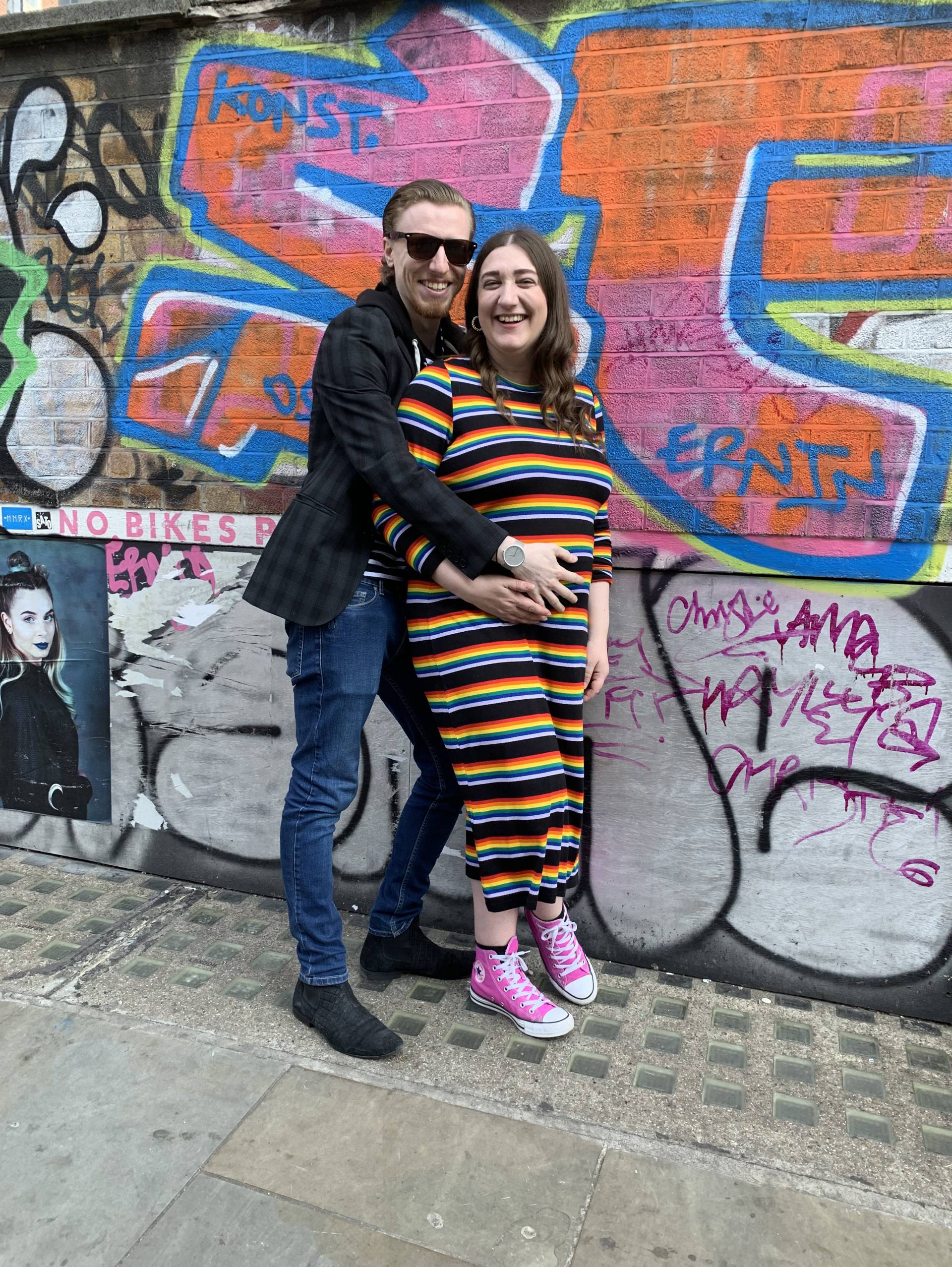 The next day, after keeping quiet for a 12 hour Margate extravaganza (think brunch, location houses, Shell Grotto, screen printing, gallery hopping and more!), I told Emma on the train back to London. Well, I say ‘told’ her but I didn’t know how to get the words out so I showed her a photo of my pregnancy test – a photo paints a thousand words after all! But it didn’t feel real.

I booked an emergency appointment at the Doctors and she estimated that I was 8 weeks pregnant. And yet, it still didn’t feel real.

We told our families over Christmas (which excused me from explaining why I wasn’t drinking or didn’t want to eat cheese – eurgh, it made me feel so sick!) and they were so happy and excited for us. But it still didn’t feel real.

Since finding out I’d been really struggling to process my feelings and the changes that were to come. Honestly, I wasn’t excited about having a baby – I didn’t believe it was really happening. And then I felt bad because I wasn’t excited – did I deserve to have a baby? I was in a really bad place mentally and I didn’t feel like myself at all: I didn’t leave the flat for a month and I had no motivation to do anything, work-wise or socially. I just dug myself deeper and deeper into a hole and I felt trapped and really lonely. You’re not really supposed to tell anyone before the 12th week of pregnancy (due to risk of miscarriage), and I was keeping up ‘a front’ for anyone that did know because I didn’t want to seem like a ‘bad Mum’. Mum guilt is awful. I think I cried every day – I’m crying now, typing this!

I started to wonder if I’d made the right decision.

In January, at week 13 of pregnant life, we had our first scan and… IT FINALLY FELT REAL! It was the most terrifying experience but the baby was looking healthy (and so lively!) and we were both relieved. We started to tell our friends and they were all really excited – we’re the first of our friends to have a baby so it’s all new and still a novelty (in the best way). Still not 100% sure on the situation myself, I dreaded telling new people so mostly left it to Jack as he was really excited and had the enthusiasm I thought people would expect.

And then, just as I’d started to feel ok about it all, at around week 20 I started to get a bump and I decided it was probably time to tell the internet. With all of my mental struggles, I’d built it up to be this big deal which was giving me anxiety. I imagined that everyone would label me as a pregnant lady/’just a mum’/un-cool and that everyone would unfollow me. I can’t explain why I thought that, but as I said earlier I was in a bad place mentally so I’m putting it down to that. (P.S. I feel a lot better now, which is why I wanted to share it all – in case anyone else feels like this) 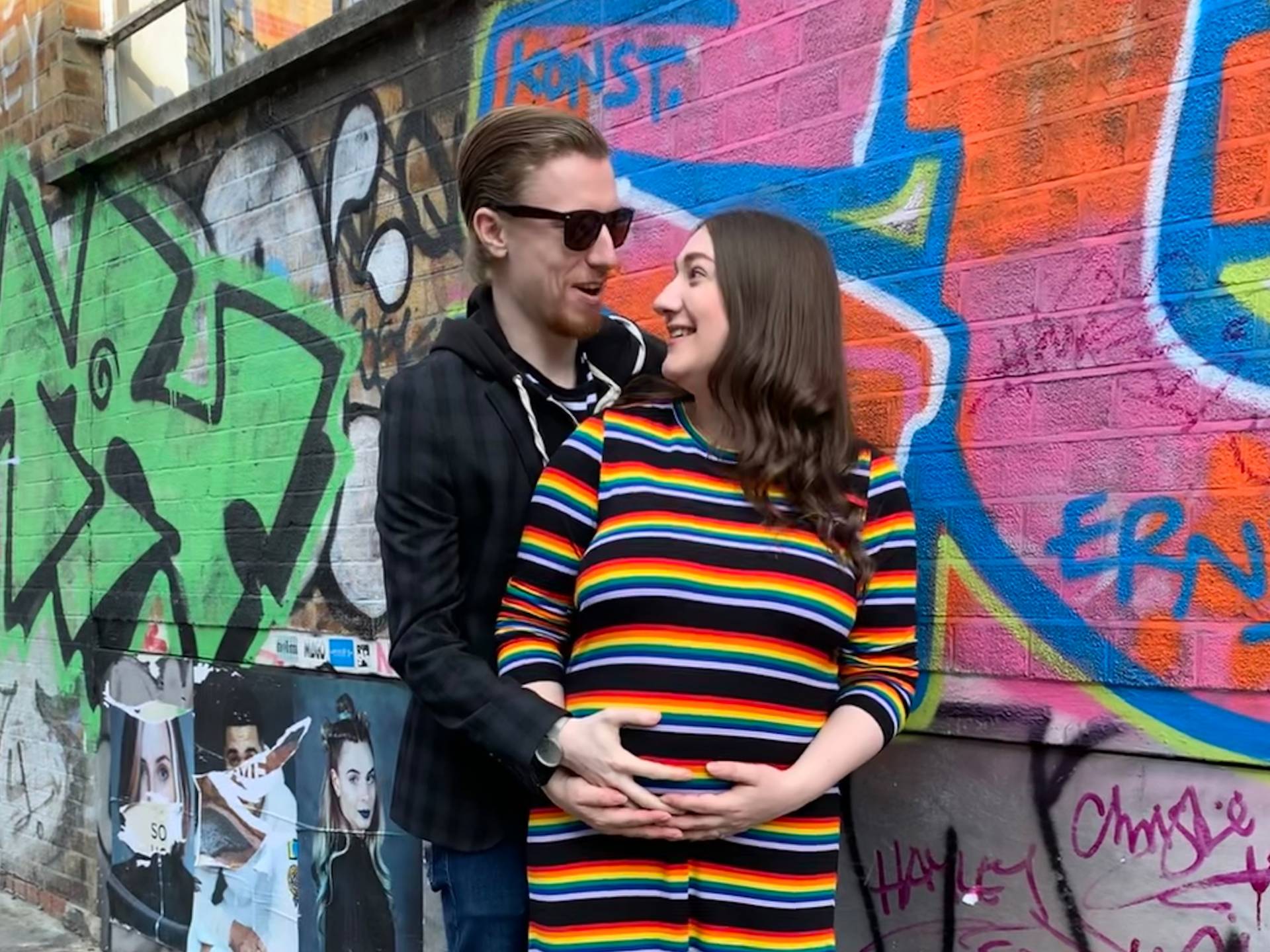 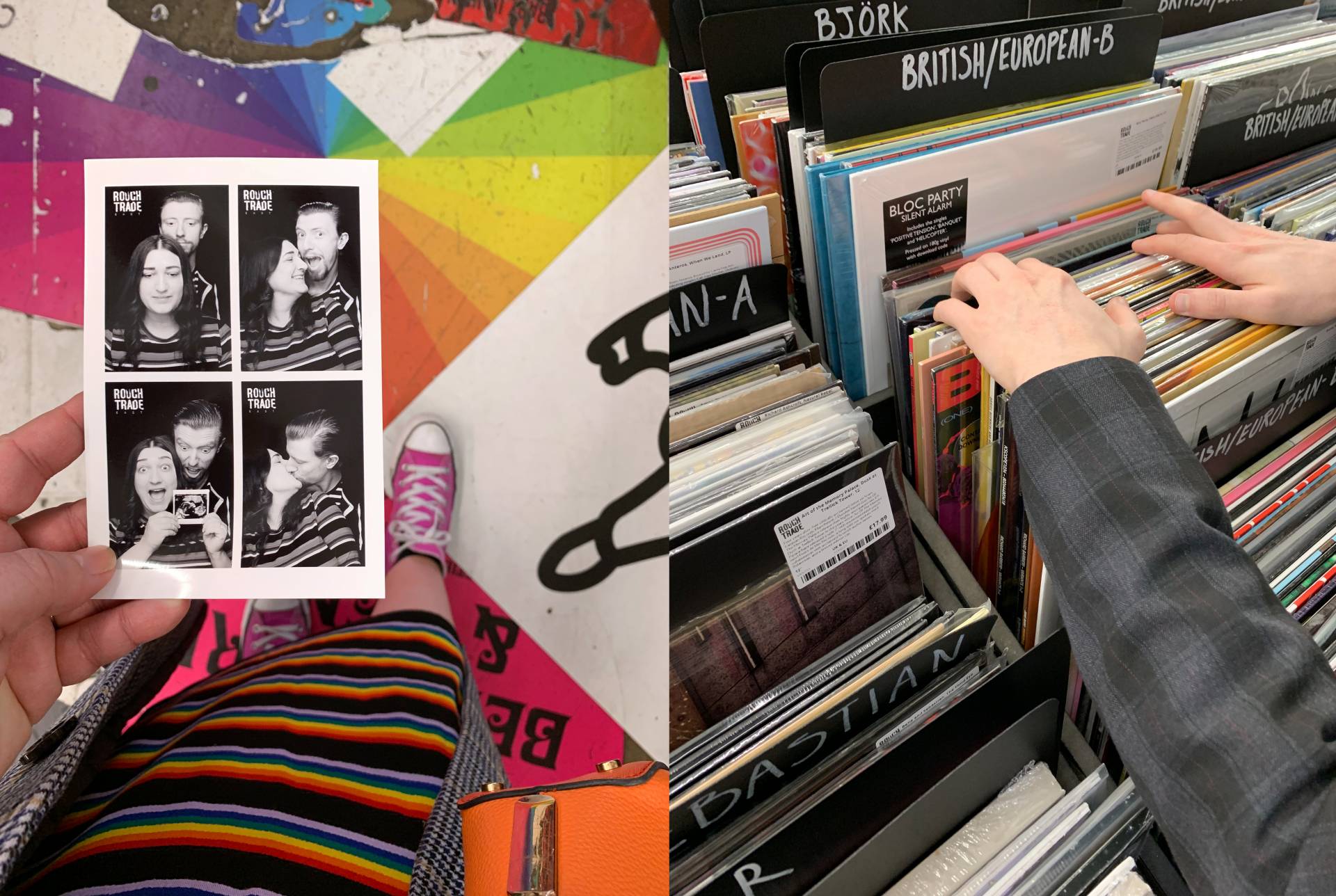 We went to Rough Trade for a little photobooth fun and to browse records – Jack couldn’t find our baby in the British/European B section Ha!

I love the internet – it’s been a place where I’ve grown up, met amazing friends and built up my career. But sometimes, it has it’s downsides. Not only was I feeling nervous about the reaction of my news, but as a creative person I was feeling a lot pressure in terms of ‘the announcement’. It needed to be perfect. But of course it didn’t, I was just putting pressure on myself when realistically people probably wouldn’t care. I know, I know. Such first world problems, but I’m glad I can look back now and recognise the irrational behaviour.

Anyway, I realised that I just needed to put it out there because keeping ‘a secret’ wasn’t making me happy. I drafted a caption, edited a photo and decided that I was doing it. On a Tuesday morning I was meeting my friend Ashley for a pre-work coffee, so I got the tube at rush hour and sat on the platform at Tottenham Court Road hovering over the ‘share’ button. I felt really sick (not morning sickness by this point ha) but I pressed it and then closed the Instagram app.

🙌🏼 Mum’s the word! 🙌🏼 I feel like I’ve been keeping a secret FOR.EV.ER. but I’m ready to let you into the circle of trust about my latest ‘project’ – I’M GROWING A HUMAN! 😱😱😱 In October I said that I was looking for a new challenge… well, life is full of surprises, eh? 😜🙌🏼🎉 It’s been a rollercoaster of emotions… panic, tears & excitement – we’ve had it all! 😂 I can’t fit everything I want to say in this caption, but most importantly @jackkingham & I can’t wait to meet our mini-me in July 👶🏼😍🎉 Here’s to hoping I’ll be a cool mom, not like a regular mom… no shade, just Mean Girls 😂 📸 thanks to @gem_morson 🎨 Mural (my other baby😂) by yours truly & @_ellamasters_ 💪🏼🌈✌🏼

As comment notifications popped up on my phone screen, I cried – tears of relief I think. The response was AMAZING! I know that I shouldn’t need comments and likes to feel validated, but after all of the anxiety, I just needed some reassurance. Everyone was so lovely and I felt better with it being out in the open: I didn’t have to hide my ‘Baby on board’ badge anymore, paranoid that I’d bump into someone.

At 25 weeks I’m still terrified about the unknown but I’m feeling great, both mentally and physically. I feel like ‘me’ again, I’m 3 weeks into a dreamy Freelance gig (Social Media at West Elm) and I love having a baby bump. Sure, I’m having some maternity clothing struggles (where are all the cool mum-to-be clothes at!? That’s a blog post for another time…) but I’m taking it all in my stride. 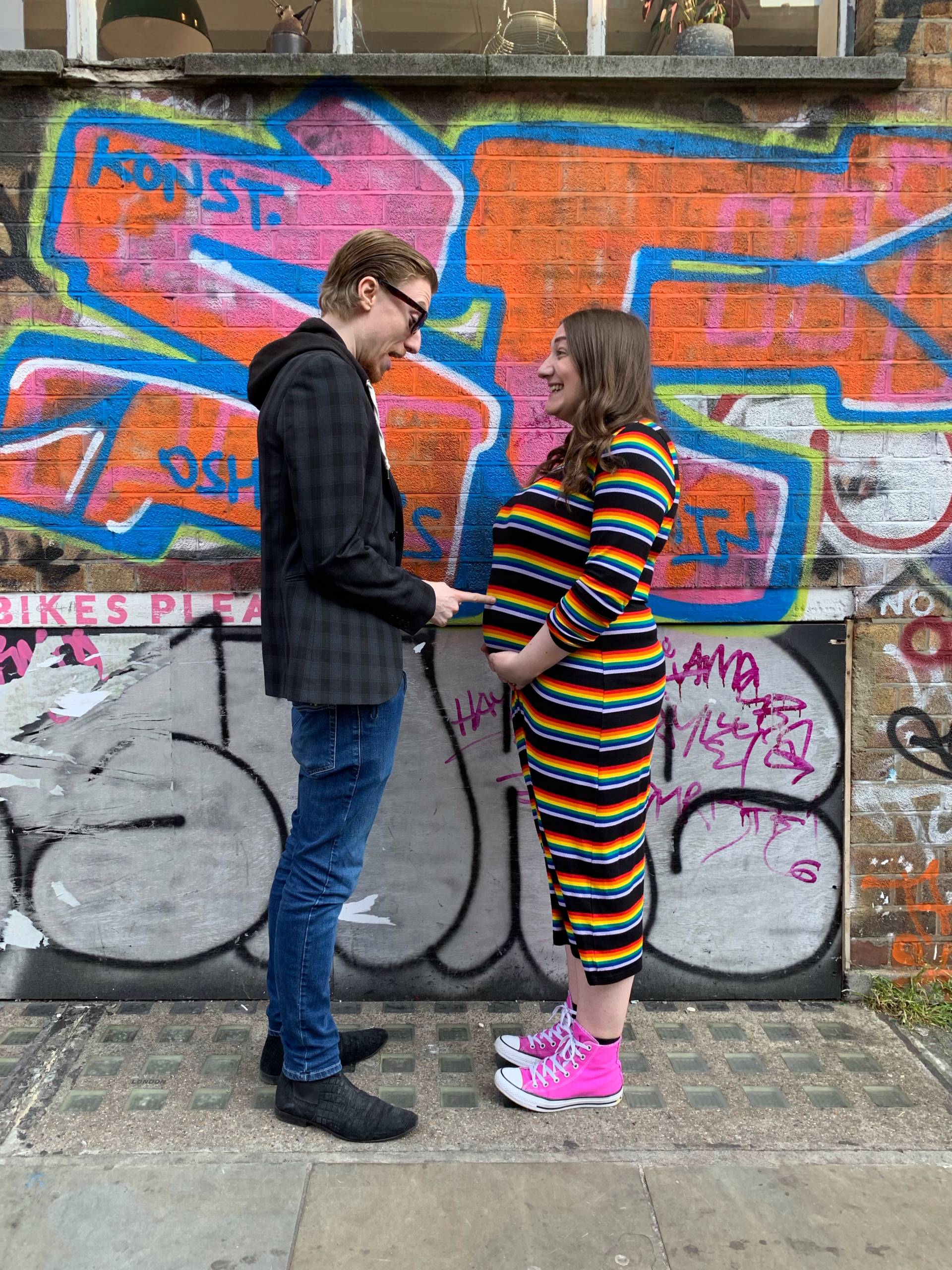 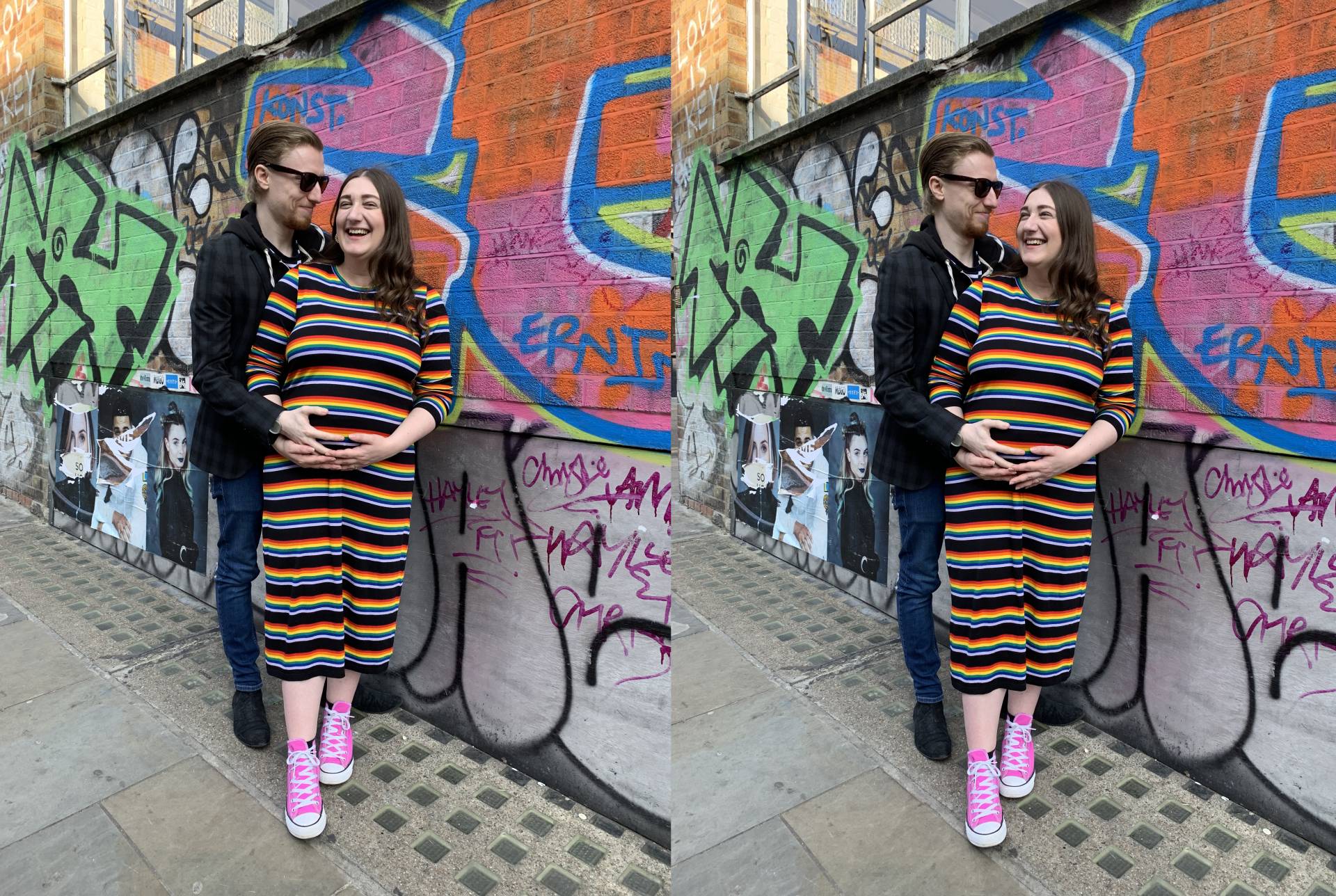 As surprises seems to be a theme, we decided to not find out the gender of the baby until it arrives, so it’s keeping everyone guessing! Although we haven’t fully agreed on baby names yet, there’s one thing we do agree on: we’re looking forward to meeting our little one in July.

There are lots of changes to come, but what’s life without a little bump!? I’ve done so much since being pregnant (I was painting murals outside in November at 6 weeks pregnant, before I realised), so nothing can hold me back now – just negative thoughts/myself! Let the adventure begin…

Confessions of a Freelancer: Mistakes I've made

Growing a human: Part one