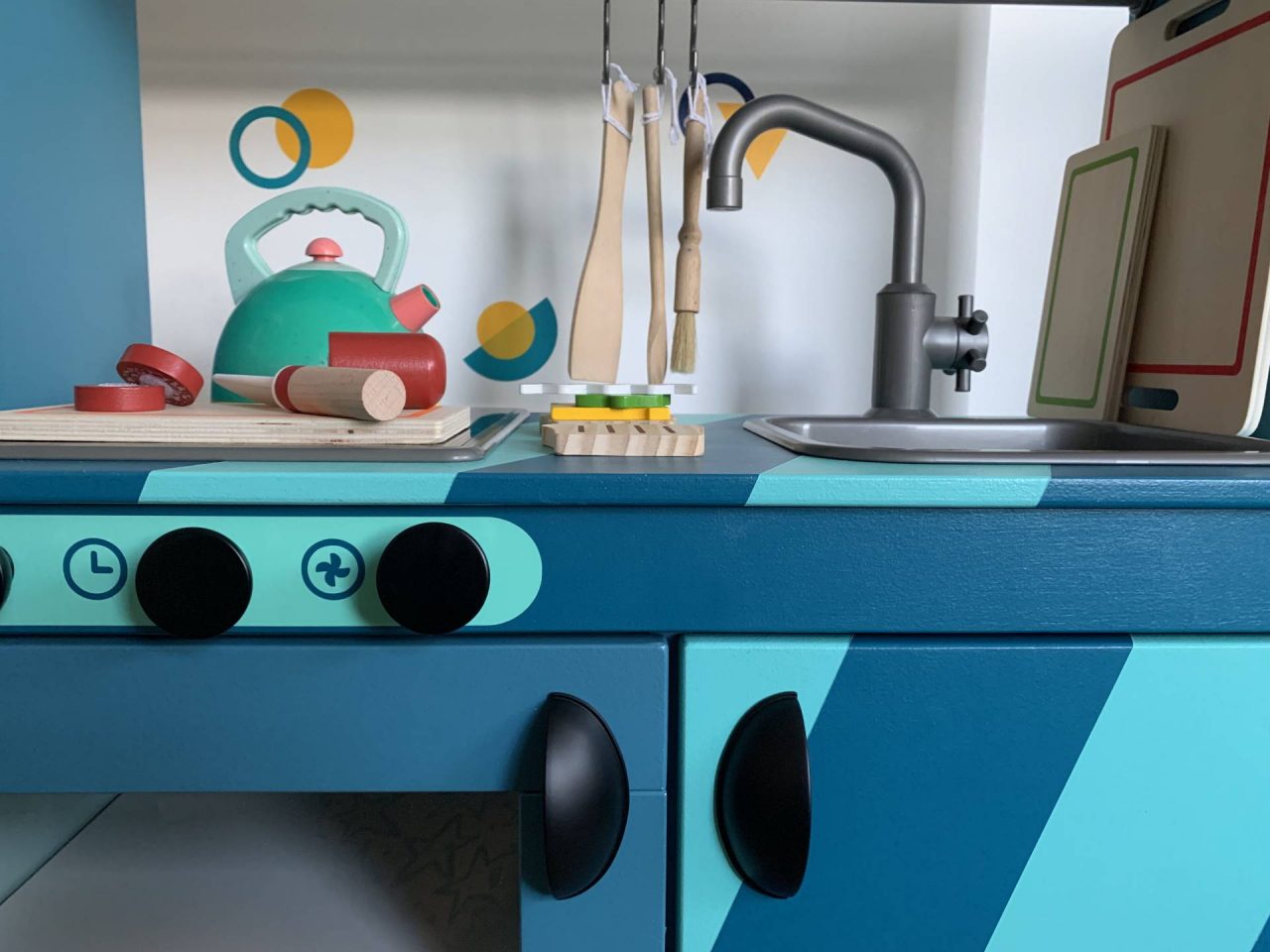 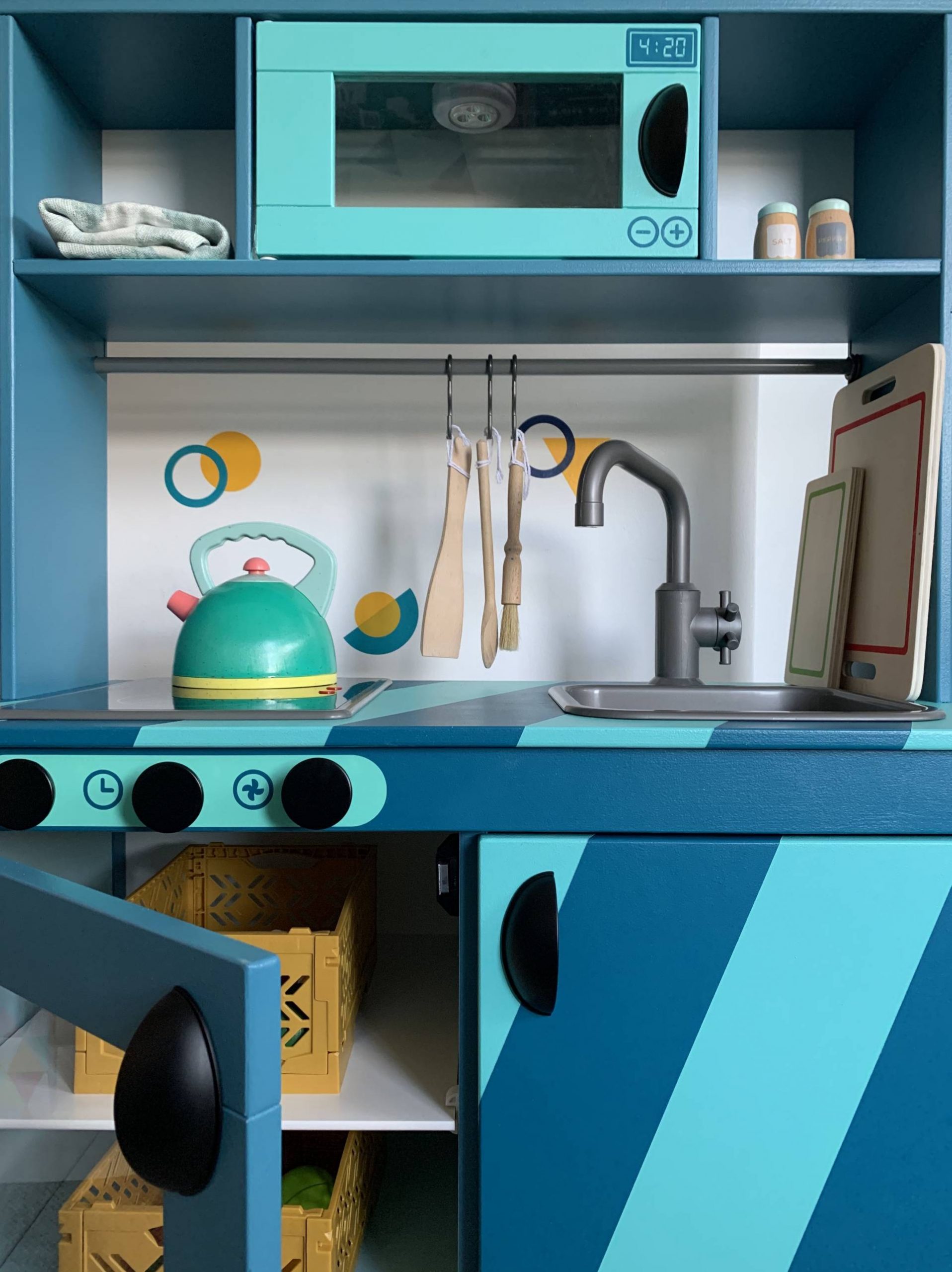 In October I set myself a DIY challenge – the IKEA Duktig play kitchen in time for Christmas. A fun toy for my son, Dylan AND a creative project for me? Win win!

The original IKEA Duktig kitchen comes in wood and white as standard which is a bit boring in my eyes, so I wanted to create something fun and bold. If you’re looking for more behind the scenes of the process (the photos aren’t that pretty btw) then check out my Duktig Process blog post! 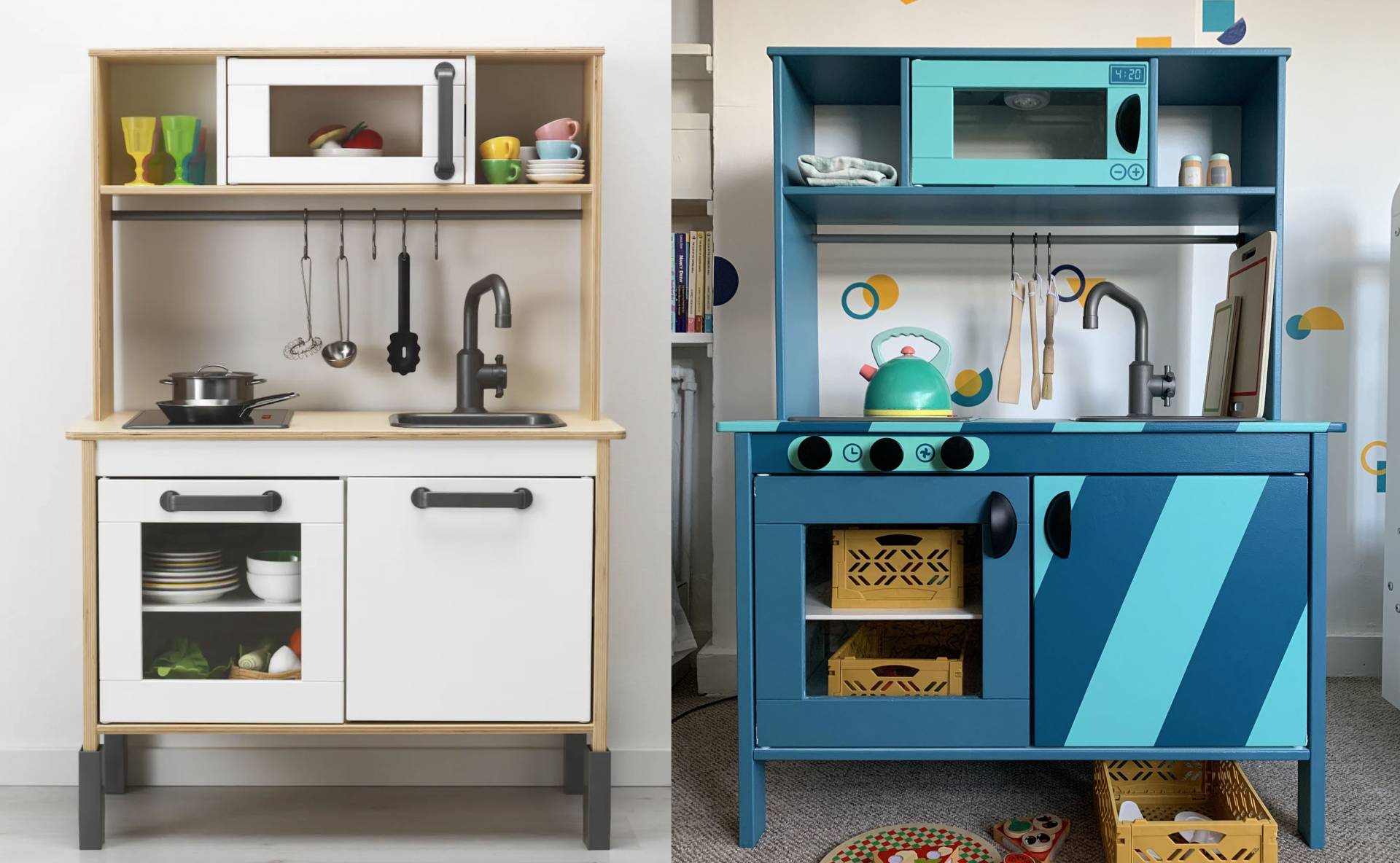 By adding colour, a statement pattern and a few other details I hope you’ll agree – it’s a full transformation! I won’t pretend it was a really easy process, because it took me a fair while to complete (lack of space and available time whilst looking after a toddler), but I do love a challenge. Before starting, I watched and read a lot of Youtube videos and blog posts – the Duktig kitchen hack is very popular with varying levels of creativity, DIY skill and dedication.

I should add that this is not my first rodeo – I’ve previously DIY’ed Nursery furniture and drawers, painted murals and art installations. I’ve had a lot of practice with masking tape and high standards when it comes to attention to detail… which is both a pro and a con. 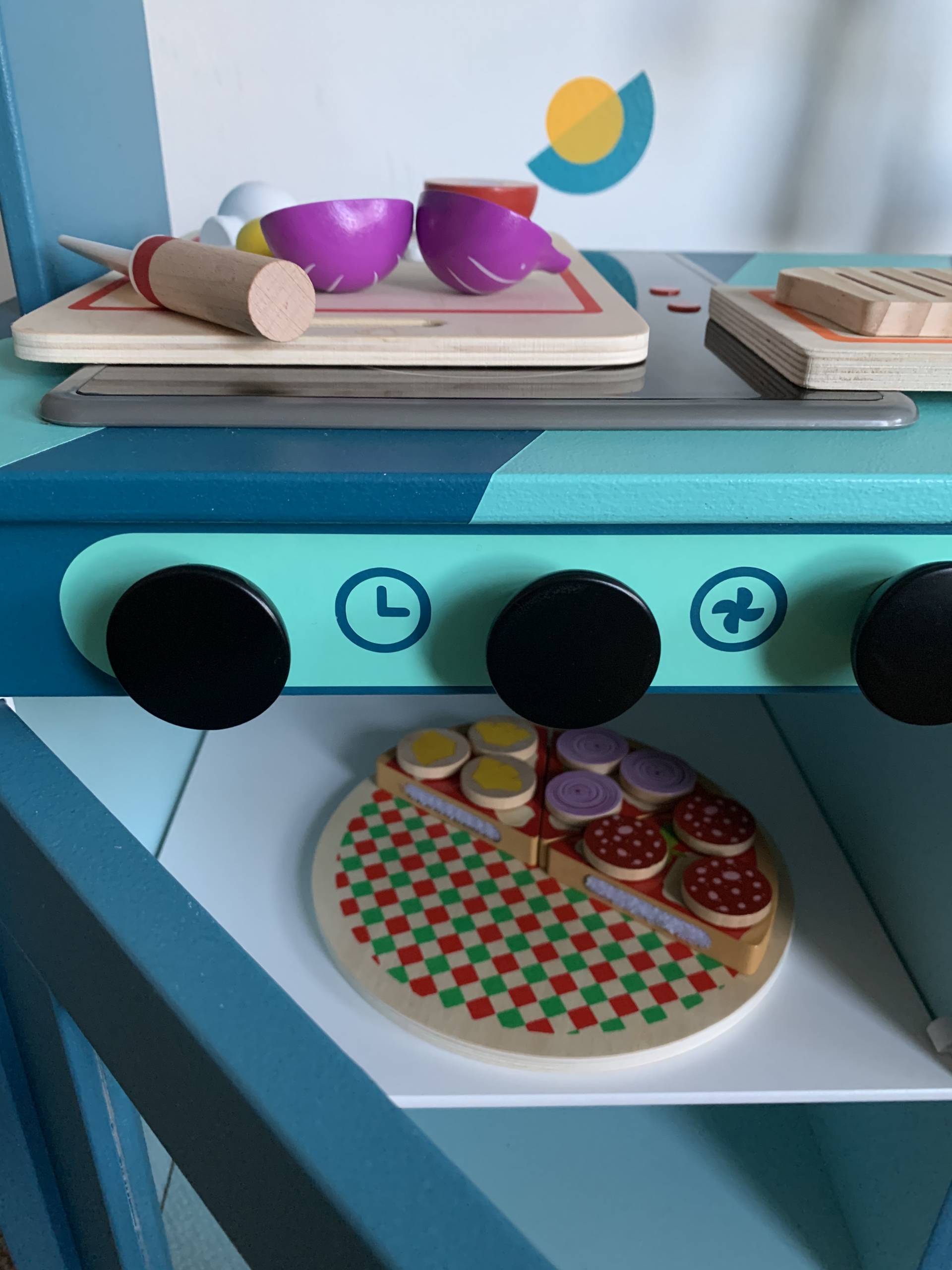 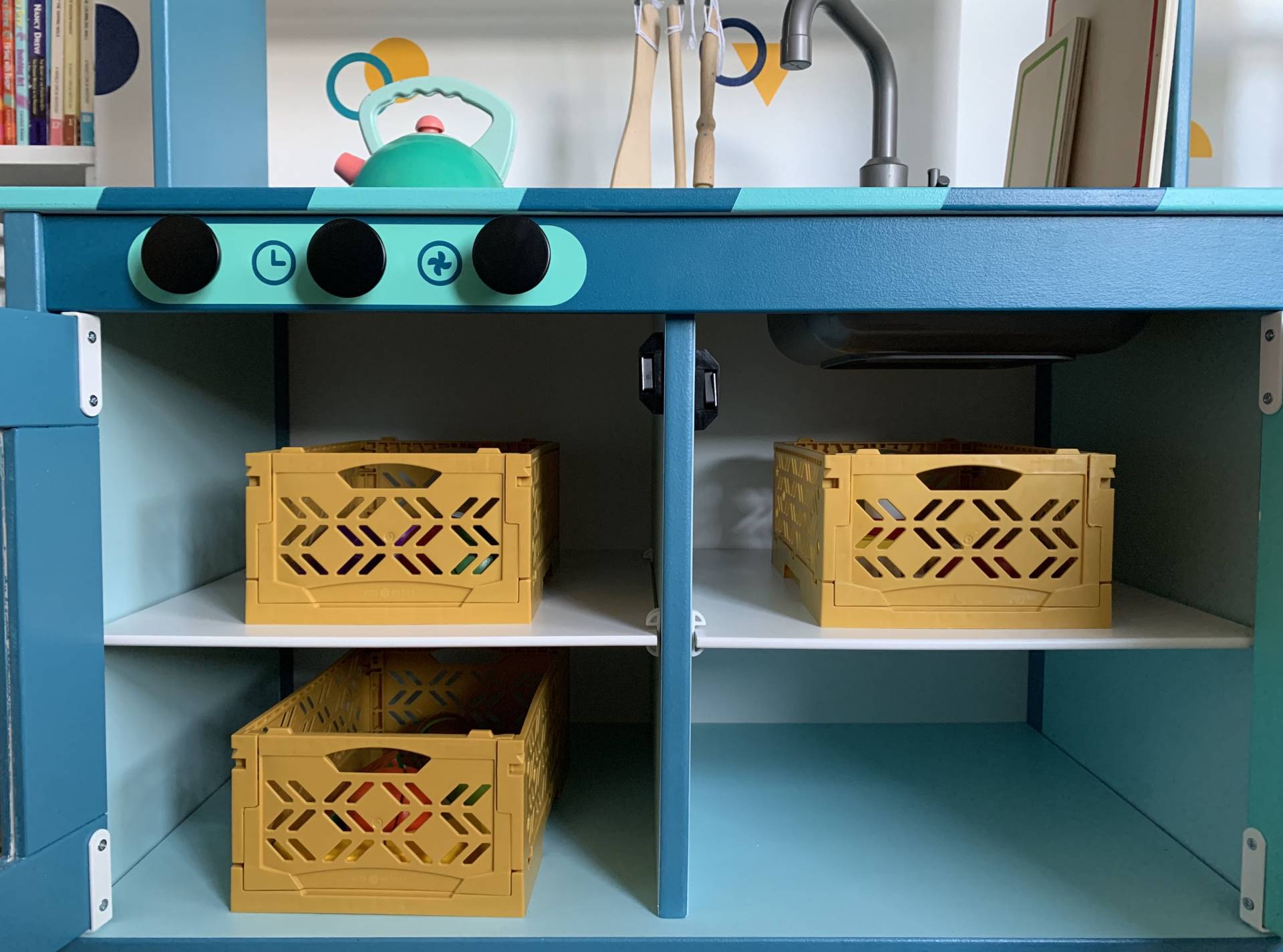 If you don’t like sanding then maybe the DIY Duktig project is not for you because there’s a lot involved (unless you have a really fancy primer). Sanding & priming is an important foundation to keeping your paintwork as durable as possible… and let’s face it, it needs to be when it comes to kids. The IKEA Duktig kitchen is part white and part wood finish, but both are glossy/varnished so need a pretty good sanding to get any primer/paint to stick. It’s probably the most unrewarding part of this DIY, but still very necessary. 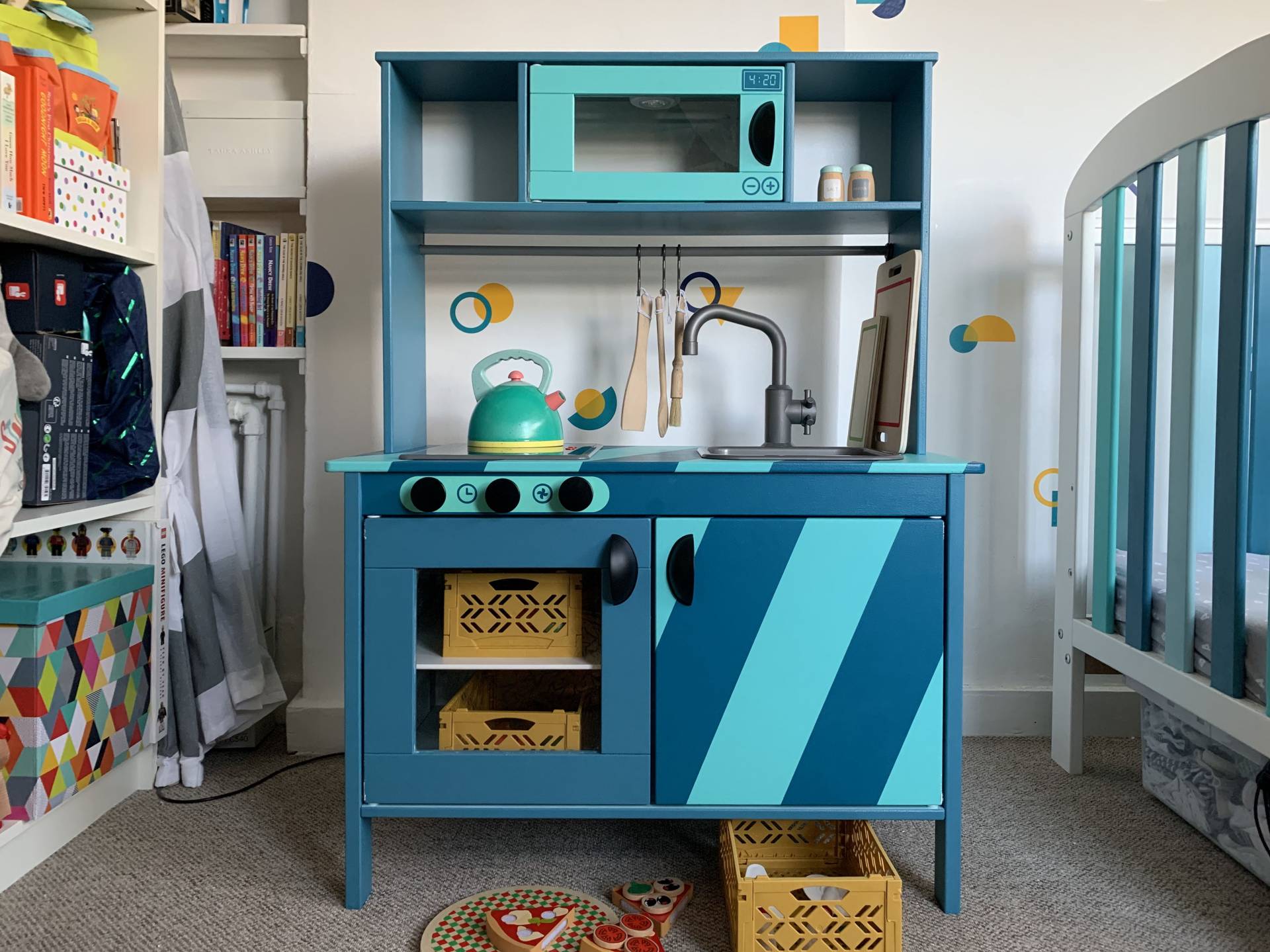 A lot of the DIY hacks I saw on the internet used spray paint (which in hindsight, I think is probably the best & fastest way to coat your kitchen) but I opted to use some Earthborn Eggshell No.17 paint which I had left over from Dylan’s nursery furniture. Earthborn paint is perfect for children’s toys & furniture as it is odour free, quick drying and durable.

A snapshot of my Pinterest board inspo – Wes Anderson vibes

Although I had a lot of ideas, my main vision was to create a statement worktop with some bold stripes. I decided that to tie it all together, the stripes should also extend onto a cupboard door and the upper shelving. I made a cardboard template so that all of the stripes were the same width and angle. 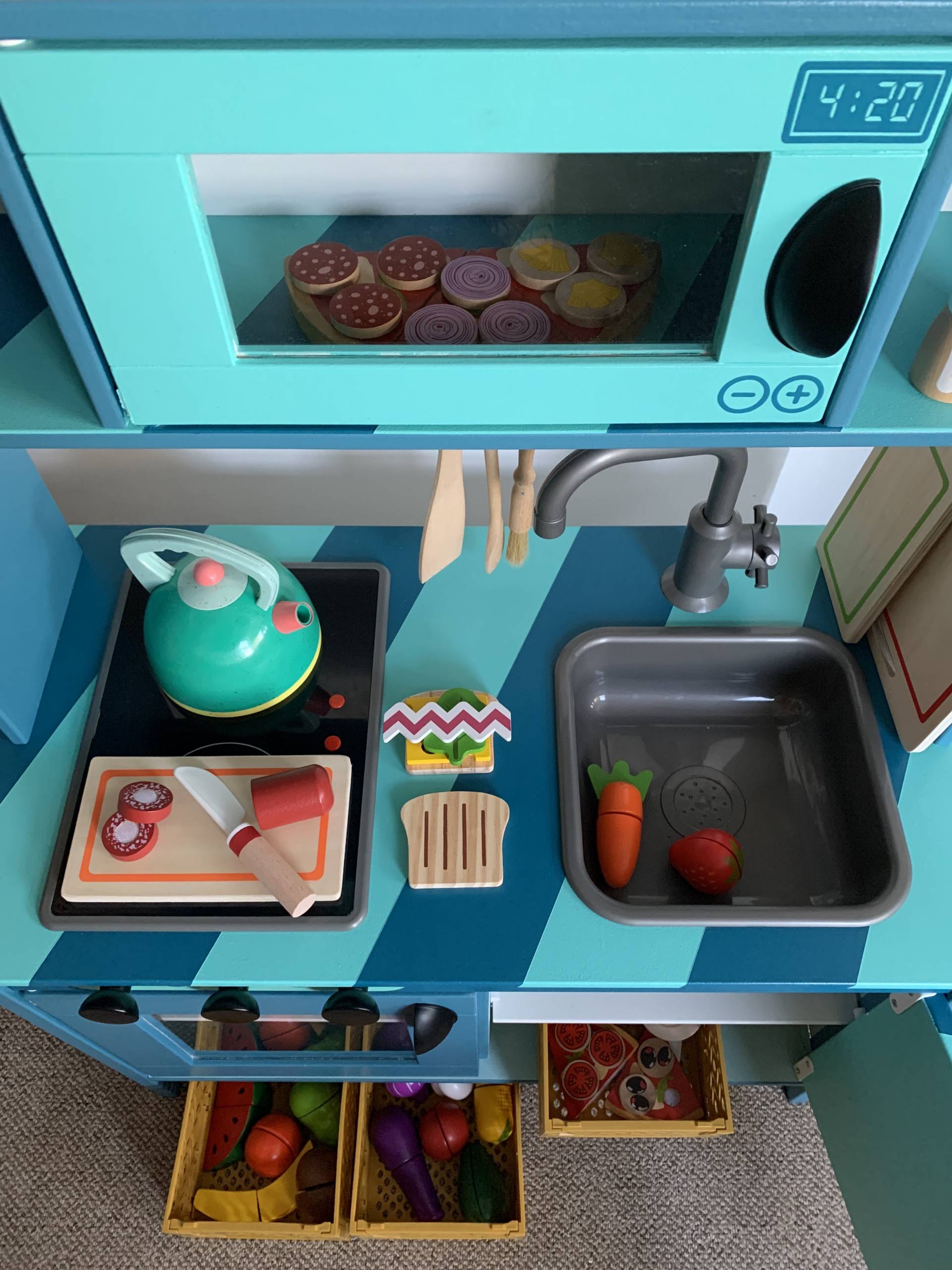 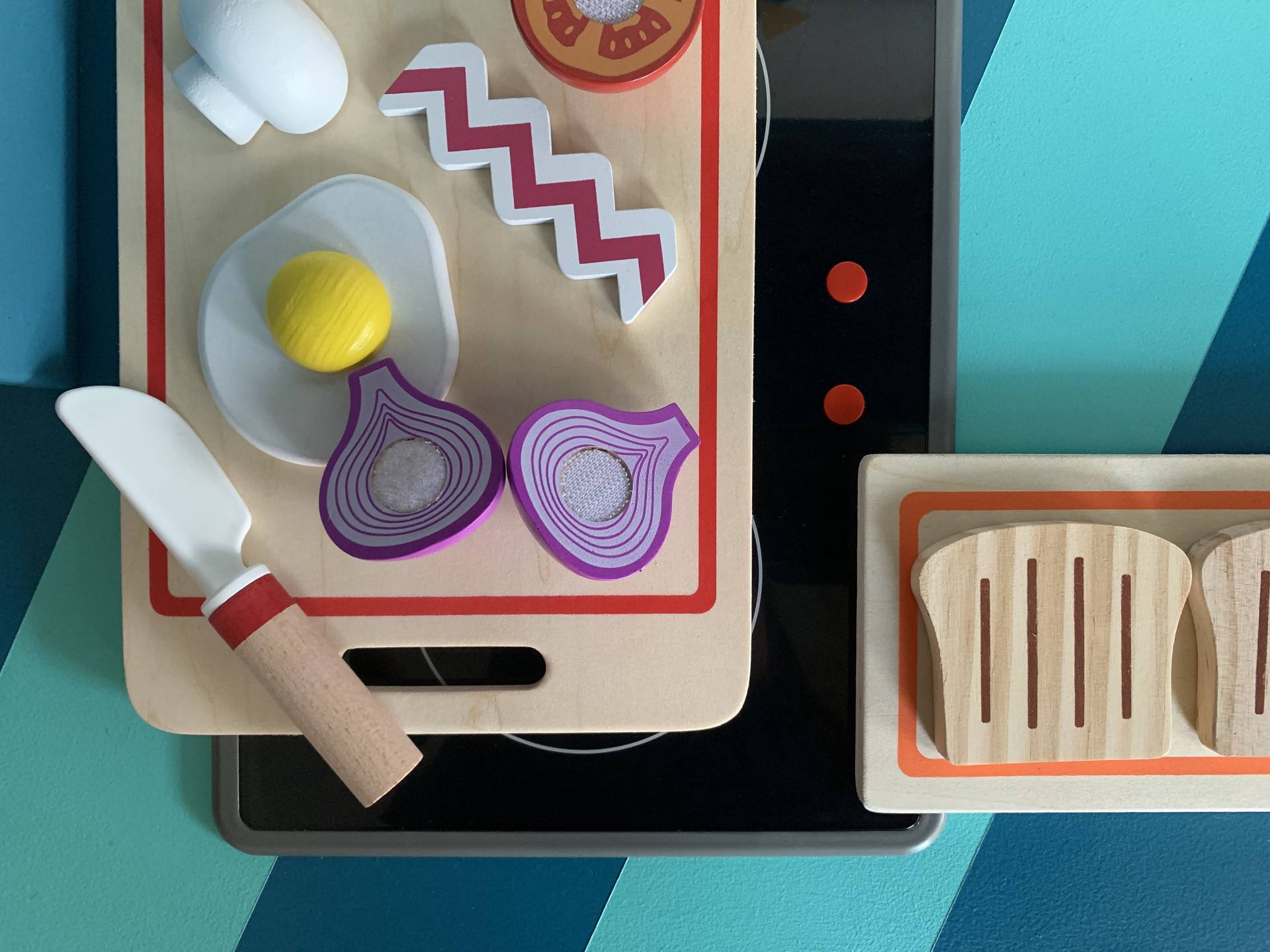 I considered using several shades of blue within the stripes but decided to keep it simple with just two. I chose the brightest (The Lido) and the darkest (Reading Room) shades for a good contrast and to really make it POP! I’m really happy with the statement stripes. 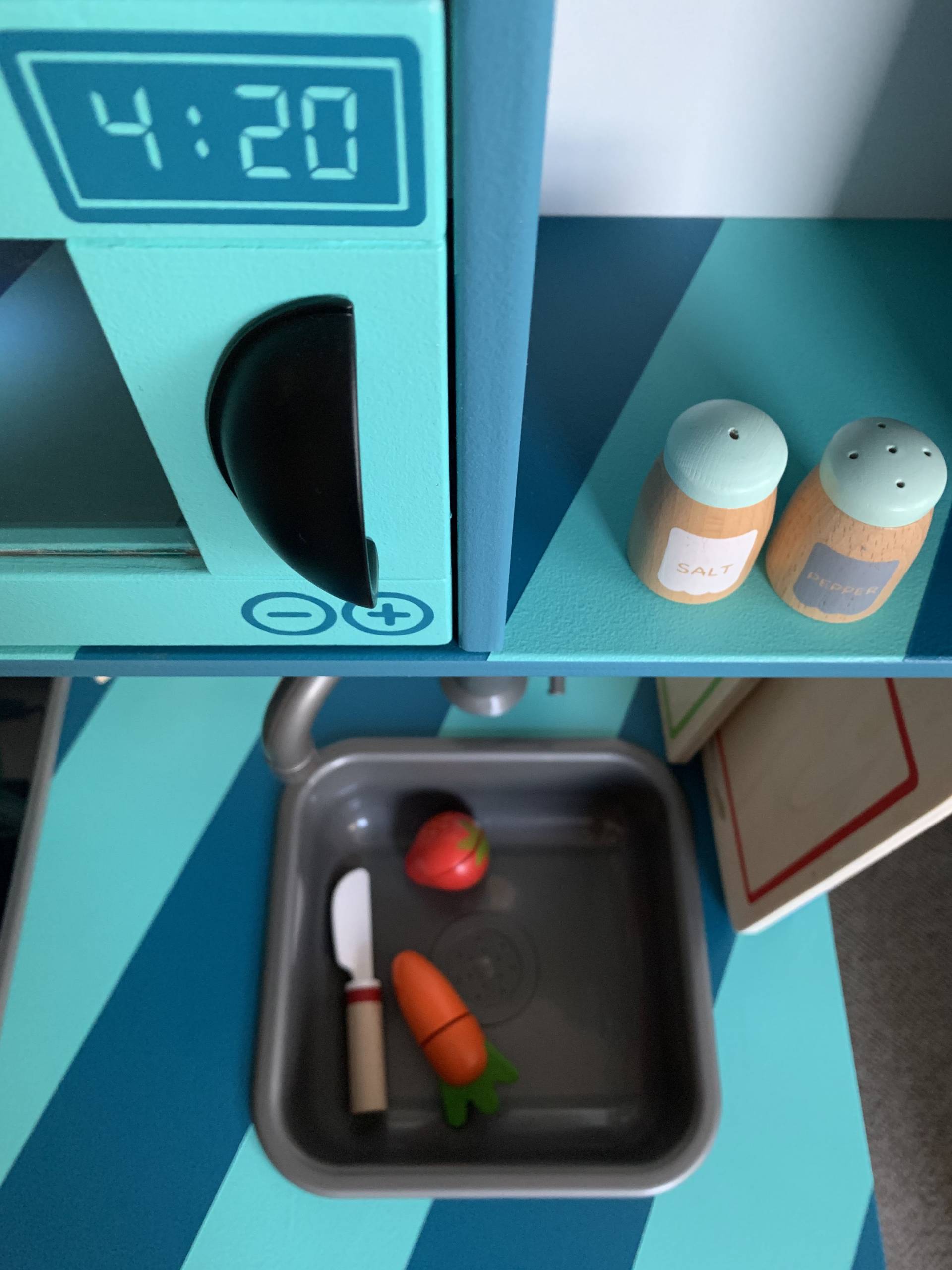 I used Frog tape to mask my stripes and get super crisp lines – oh so satisfying!

The Duktig comes with some plastic handles but to really push the graphic shapes look of my kitchen further, I chose some different ones. It was quite eye opening really as I’ve never had to shop for handles but blimey, there are some quite ugly ones out there! Concentrating on the shapes, we chose the half circle handles for the doors and some round knobs for the oven which we spray painted black to match. 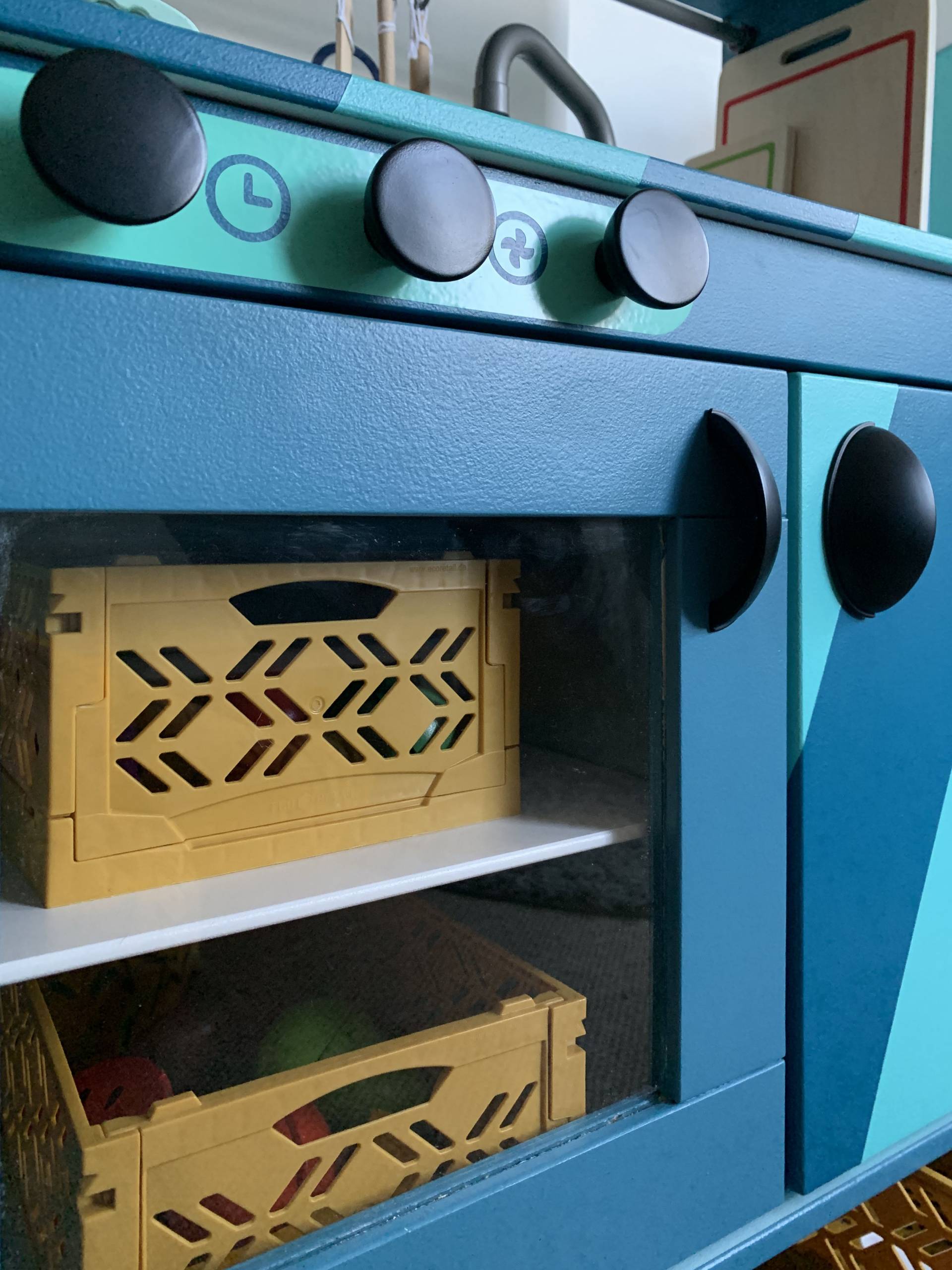 Swapping the handles was quite involved as it meant that we (well, my other half, Jack) had to filler the existing holes in the cupboard doors and get them as smooth as possible. If you look closely you can see the indent in certain lights but overall I’m super pleased with the finish and of course, Dylan will never know! 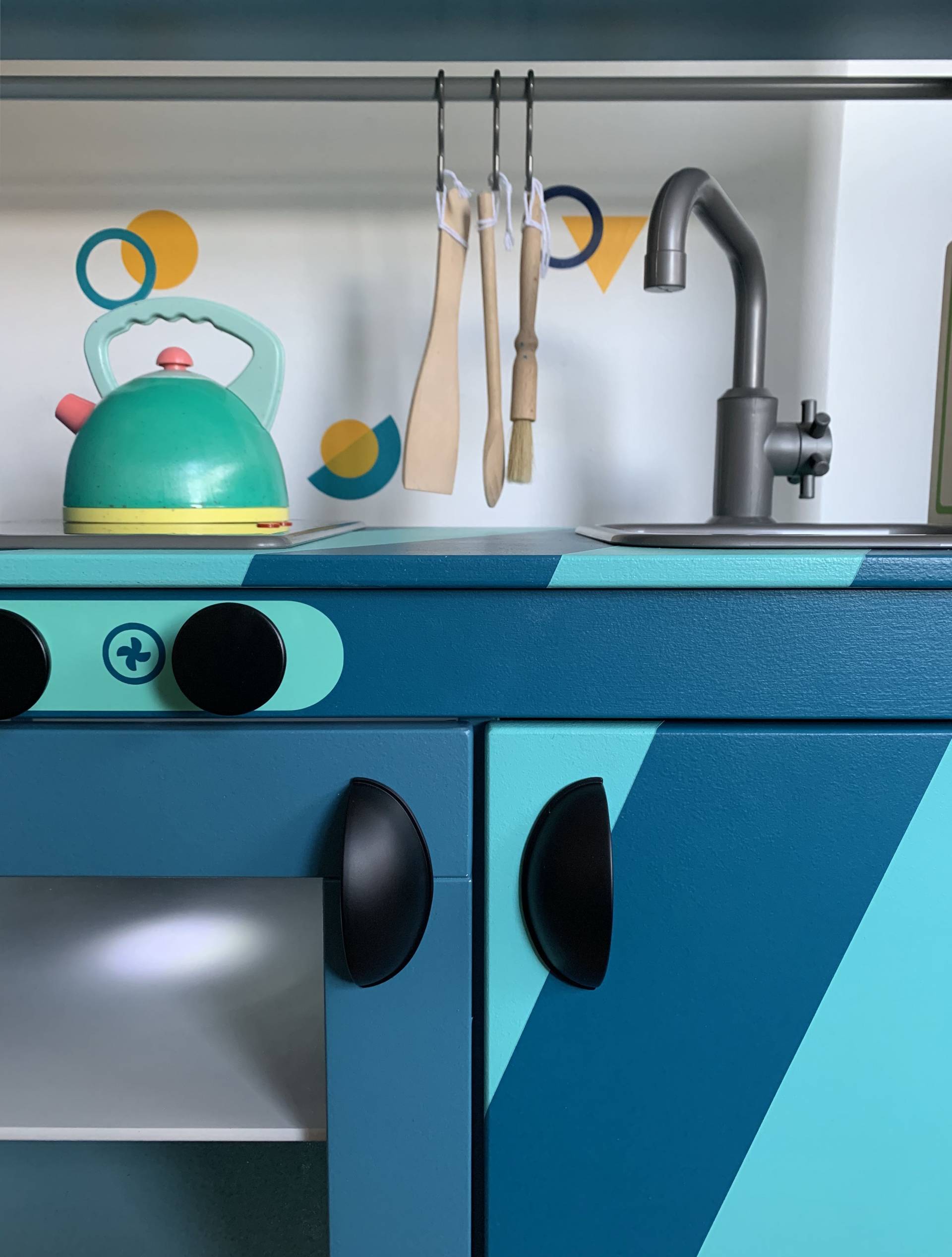 I think changing the handles has made a big difference to the overall look – the devil is in the details after all!

Speaking of detail, I didn’t stop at the handles. I added some vinyl decals which I designed and cut on my Cricut Joy machine. 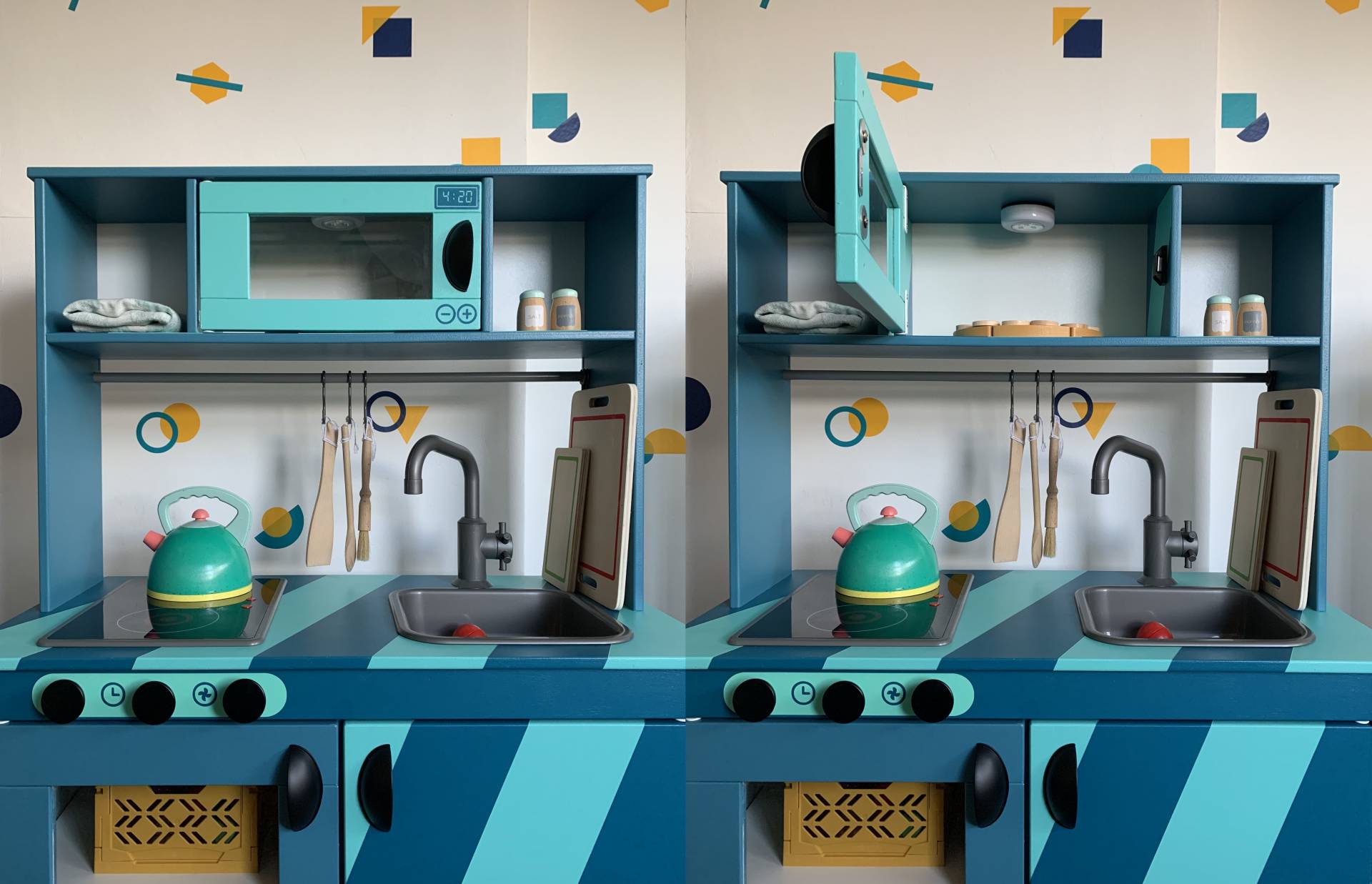 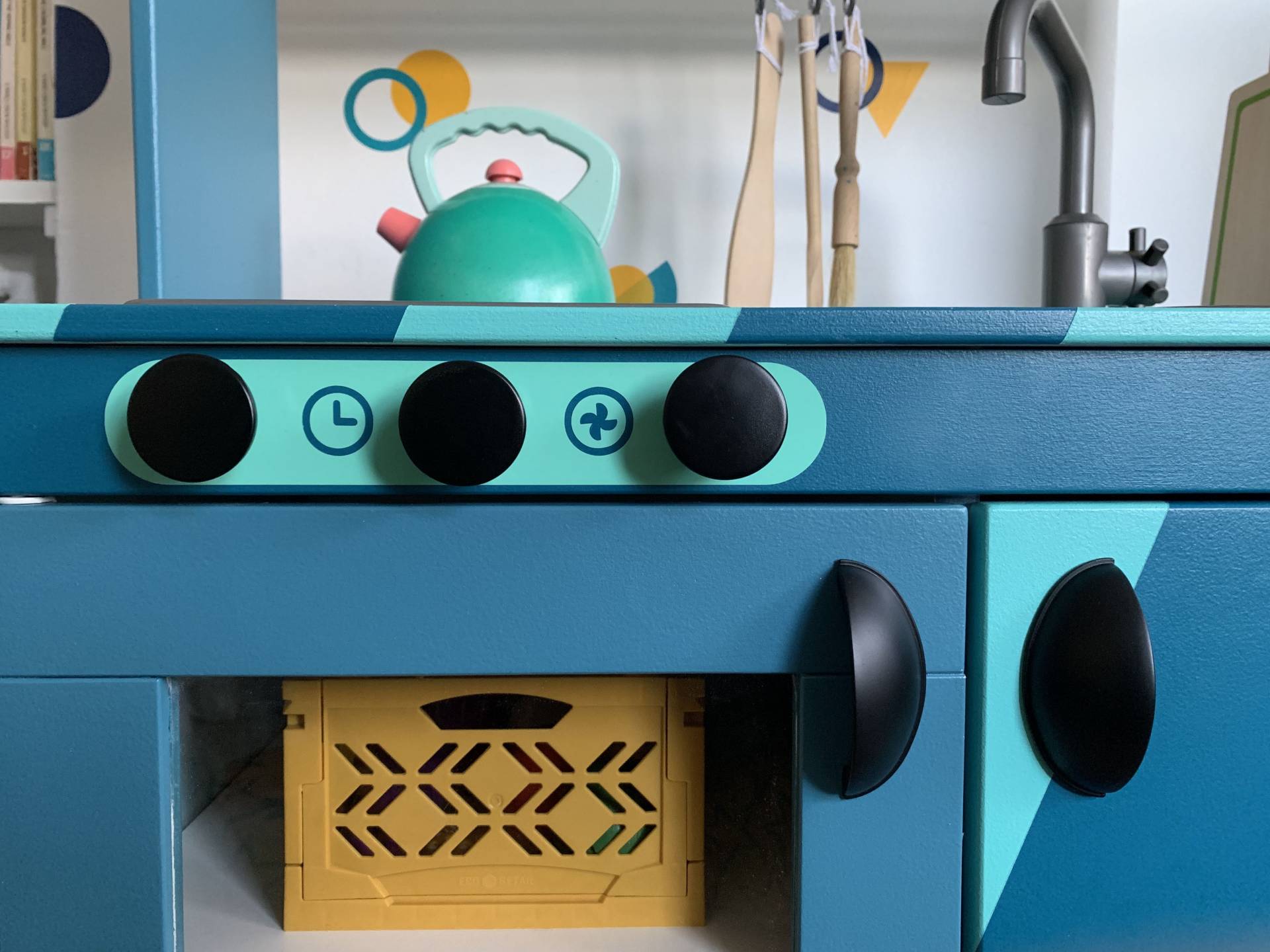 For the oven, I added a contrasting panel with timer and fan oven symbols (above). For the microwave I added a digital clock and plus and minus buttons to set a timer (below). 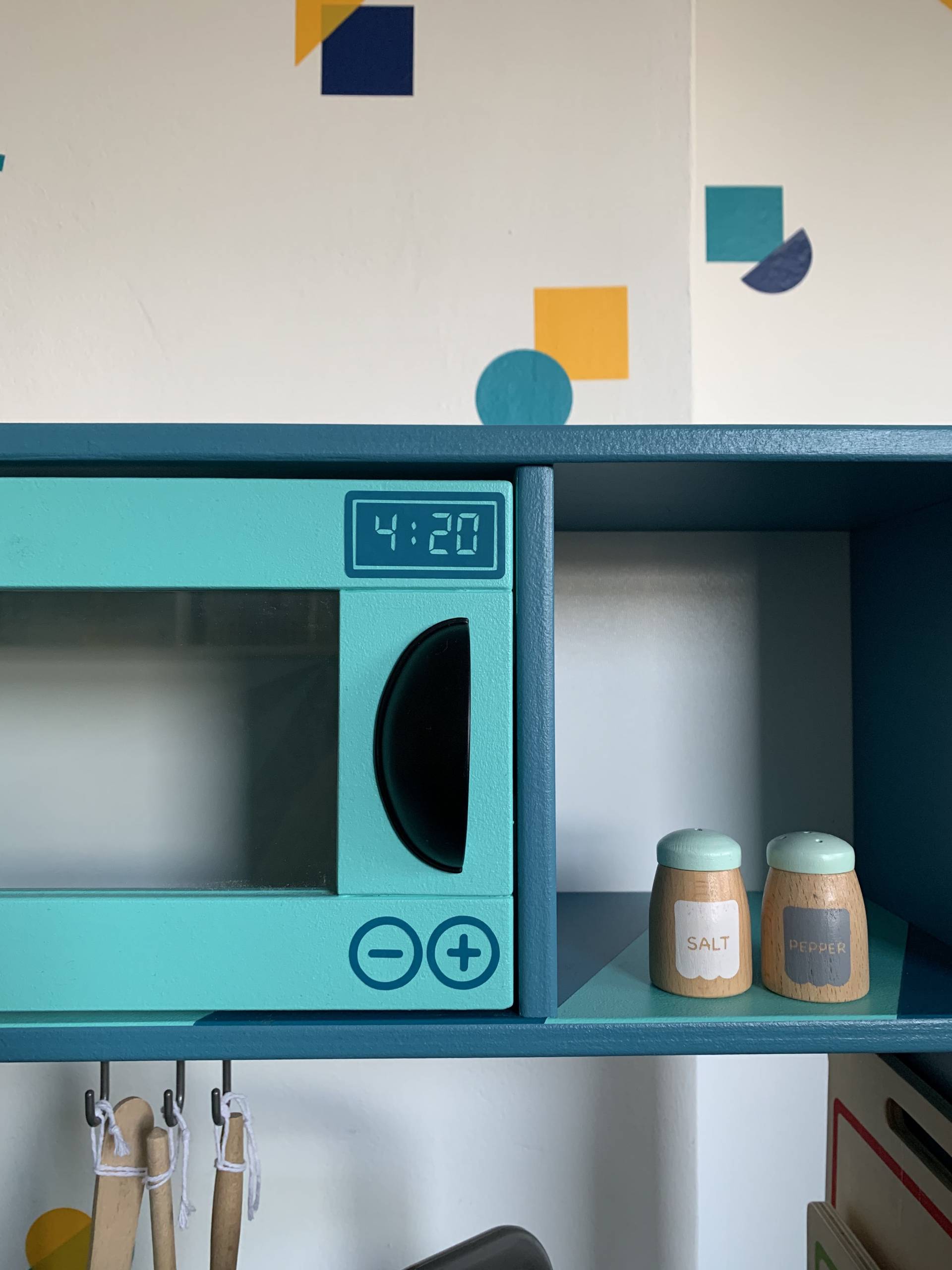 It didn’t take me too long to do, but I think they really finish it all off and make it even more interactive.

The final detail is these mini LED touch lights which we added to the microwave and oven. They’re only from Poundland so not the best quality, but not bad for £1! 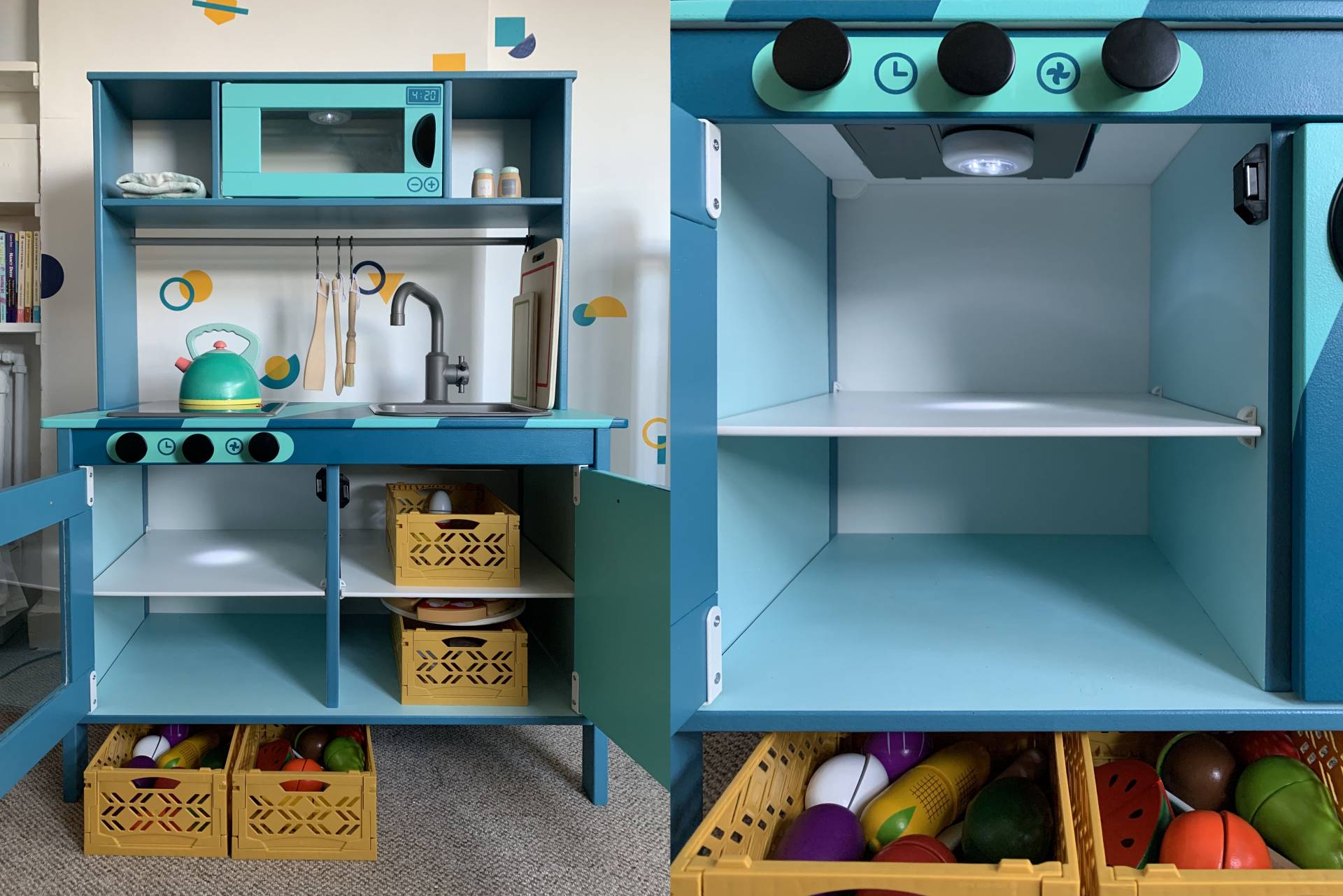 As with any project, you learn as you go along so I wanted to share a few things which might be handy if you’re thinking of doing your own DIY Duktig: 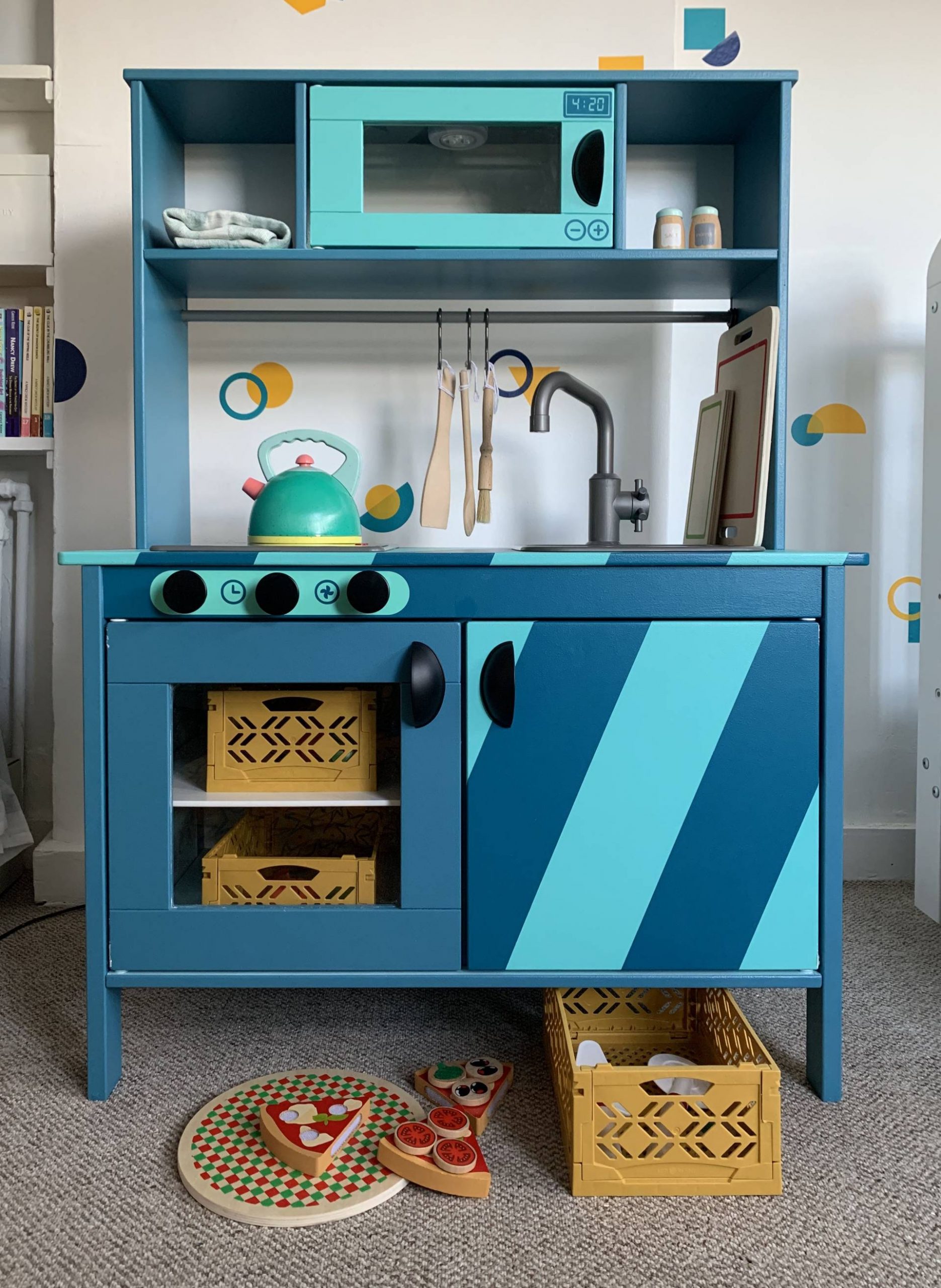 Of course with it being a flat pack kitchen, some of the parts aren’t perfectly aligned and rub in places. Where I’ve added a few coats of paint the doors are a lot tighter at the corners which means paint is already peeling off. I can’t pretend I wasn’t a bit upset as I had just spent hours painting it all… but what can you do? After speaking to a few other parents it seems this is a common issue with a DIY Duktig so I guess I just need to get over it. 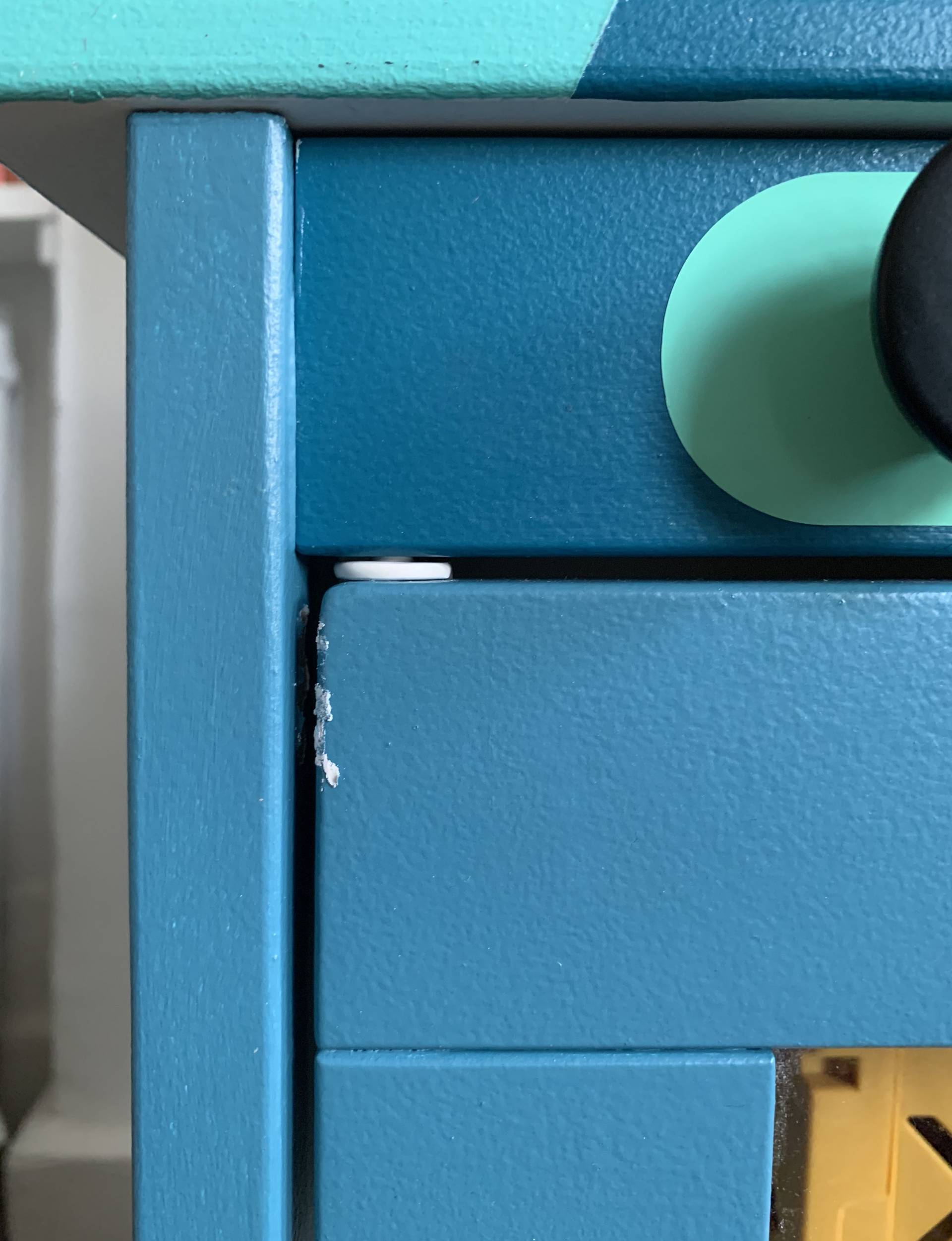 The microwave & oven doors with the perspex panels are really hard to paint. Even though I masked them off and really got into the grooves with a small paintbrush there’s a white gap on some of my doors. (I know Dylan will never notice but ever the perfectionist!) 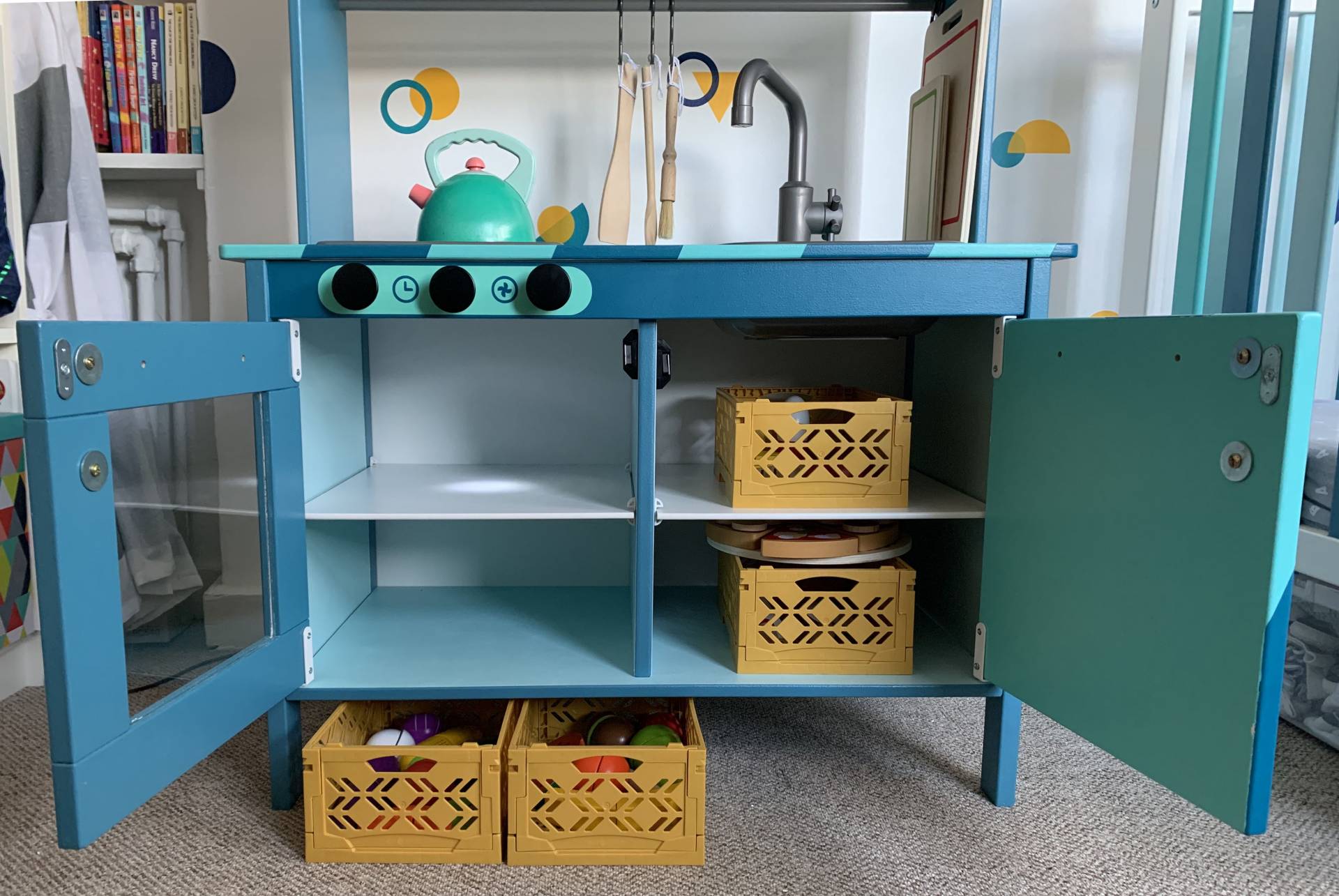 To complete, I added wooden play food from Lidl and the yellow recycled plastic crates from Hema for storage. Overall I’m SO happy with the finished look, but I might make a few changes in the future. Initially I had planned to add a splash back but with the Christmas deadline looming I had to put that part on hold to get everything else finished to the standard I wanted.

On Christmas Day the stress, sweat and hard work was totally worth it when Dylan’s little face lit up as soon as he saw it! He is fascinated with opening and closing the cupboard doors and has even shown an interest in washing up – can’t wait to get him properly trained up on that ha

Fingers crossed it will be longer than 5 mins before the paint is properly scratched off… especially those stripes, eeek! 🙂

Artist in the making: Abstract Art by children